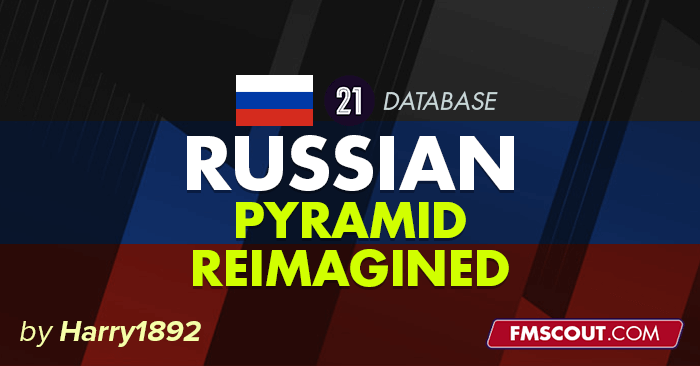 Hello and welcome to my rework!

This is an update of my Russia rework for last years' version to make it work for FM21.

The hope is to make Russia a more fun and interesting country to manage in without being too unrealistic in doing so. The loose premise is that a return to summer football in the country leads to more fan involvement due to a friendlier climate and international interest (as the league will be played when other big European leagues finish in May) - therefore meaning more money within the Russian game.

As said before, the Russian season now runs from early March to late November, with a short summer break for any international competitions, instead of the current format with a momentum-killing winter break lasting several months. Transfer windows have been adjusted for this too, with a long one in the winter during the season's longest break and a shorter, January-esque one in the Summer.

In terms of changes to the pyramid, the first is that the Premier League now contains 18 teams, in line with existing future plans to expand the league. I've reversed last season's relegation of Krylya Sovetov and Orenburg to make up this number. Relegation works the same as before, with the bottom two being directly relegated to the FNL and 16th and 15th placed playing in a two-legged playoff against 3rd and 4th in the FNL for a place in the following season's top flight. 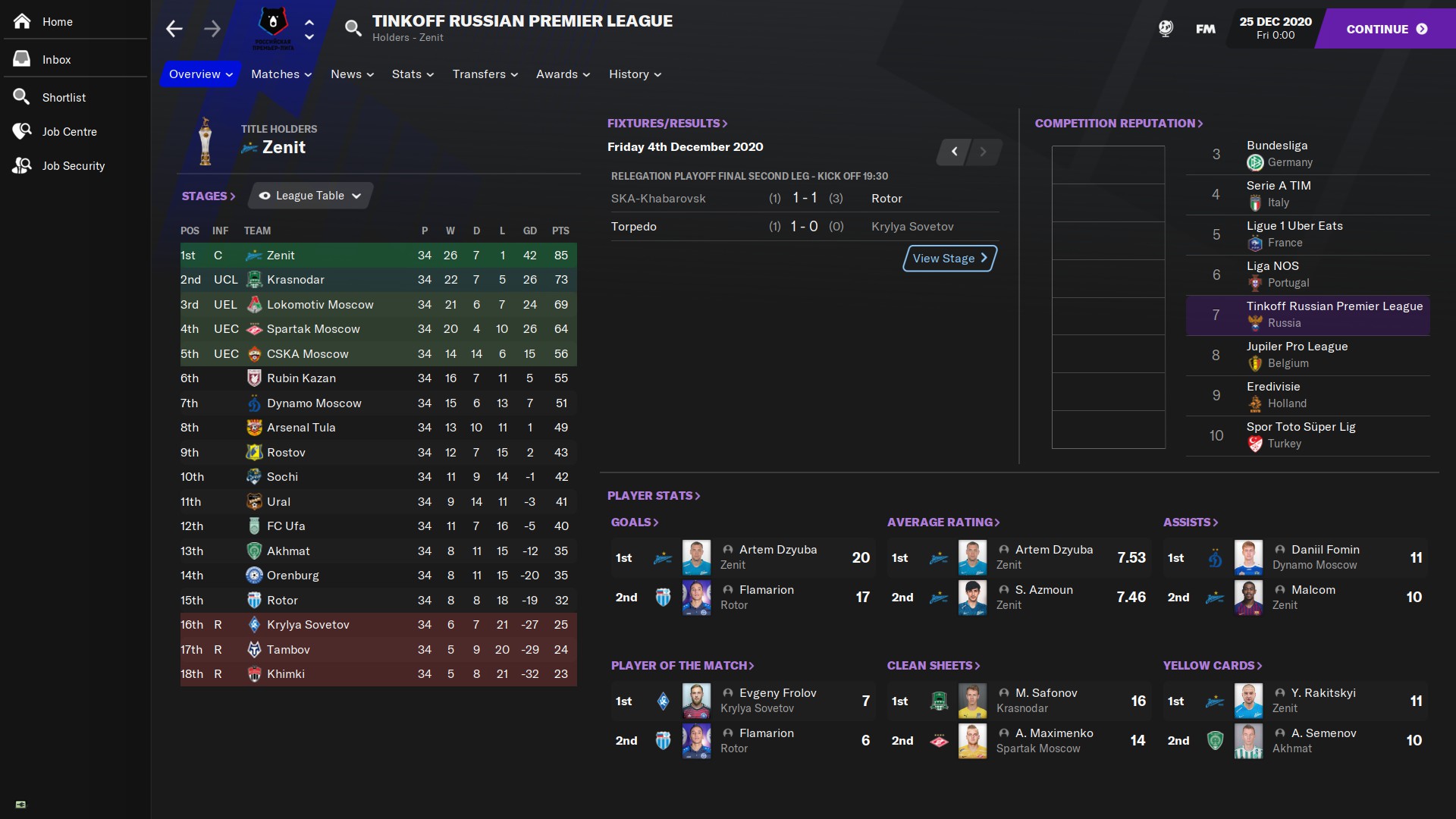 The second tier (FNL) is almost exactly the same as before, with 20 teams and the top two automatically promoted, but relegation has been changed. The PFL, transformed into a new 22-team third-tier, now exists below the FNL. As such, the bottom two of the FNL
will be directly relegated, and 18th and 17th will play 3rd and 4th from the PFL in another playoff. Meanwhile, the PFL's bottom three will be directly relegated to the fourth tier, no playoffs involved. 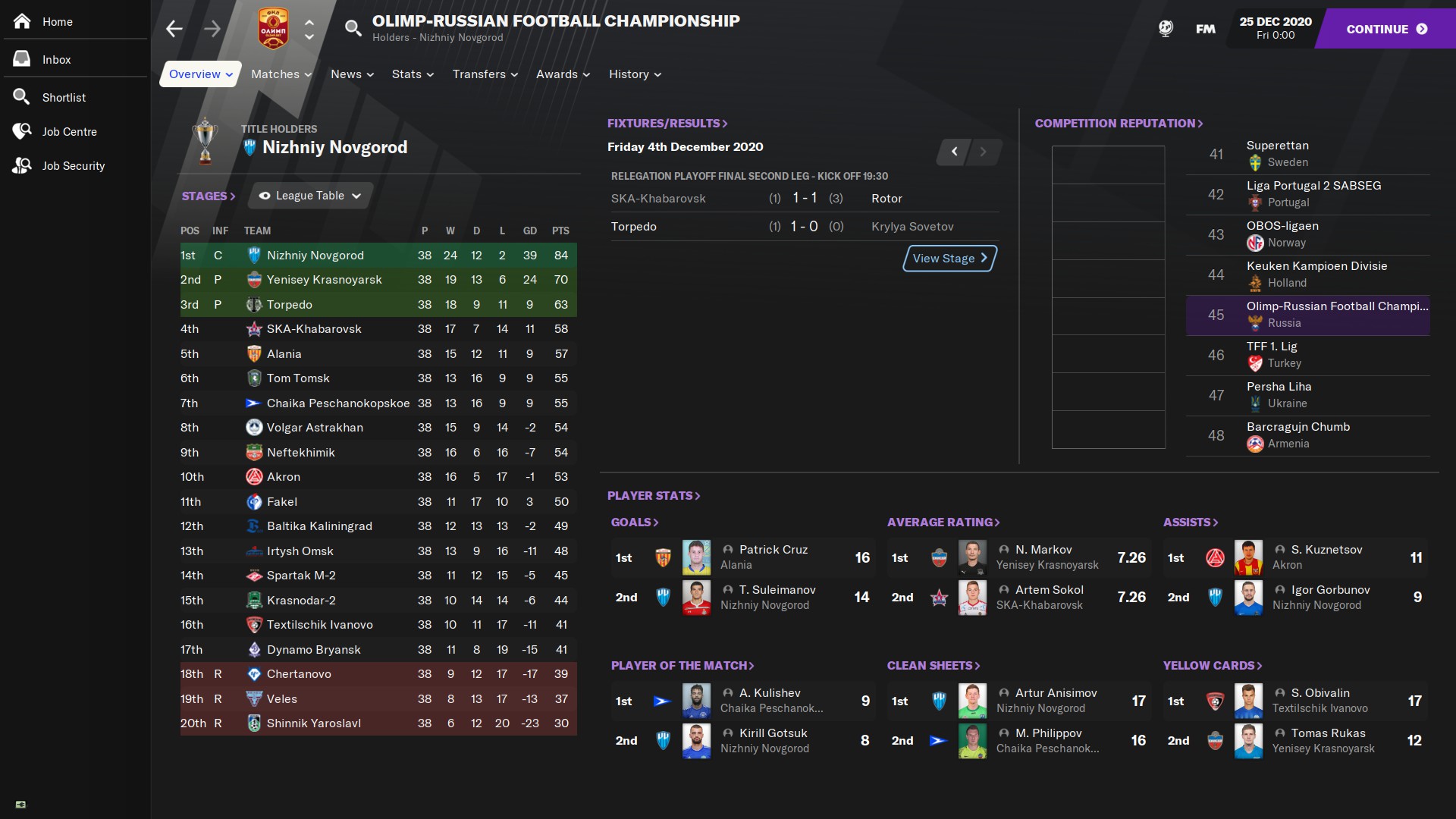 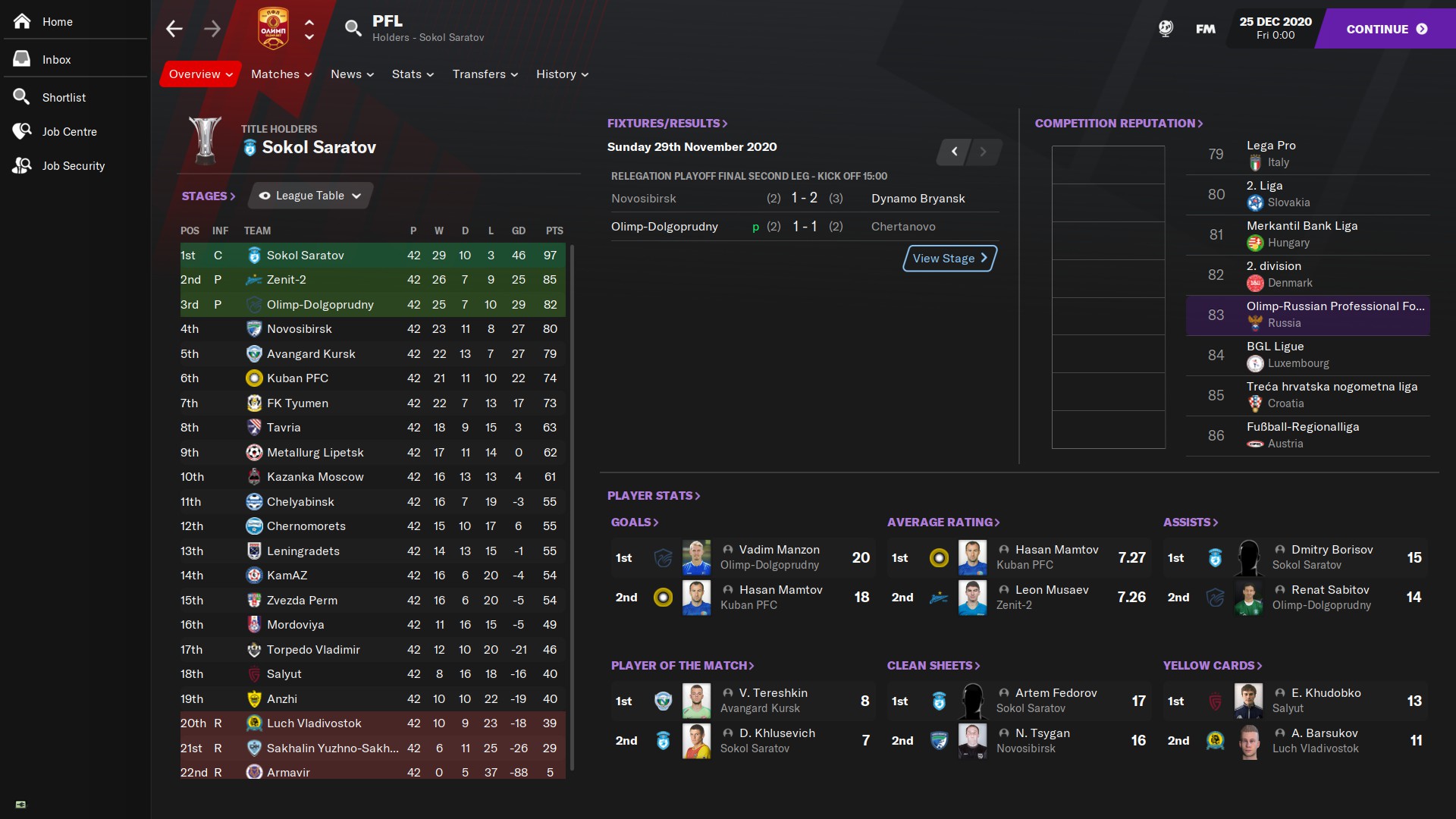 The final playable tier is the fourth tier, which is divided into six regional divisions - West, Moscow, Central, South, Ural-Povolzhye and East. The winner of each division will enter into a two-legged tie with one other for one of the three spots in the PFL next season. I've set the preferred regional divisions for all teams in the pyramid, so teams should in most cases be relegated to the correct division for their location. The numbers in each league can fluctuate - for instance, the Southern division starts with 24 teams, but if Southern teams keep winning promotion and none are relegated the league will reduce in size. The exceptions to this are if a relegation or promotion would take a league below 16 or above 24 teams, in which case any relegated teams will be entered into another of the divisions to keep numbers manageable. 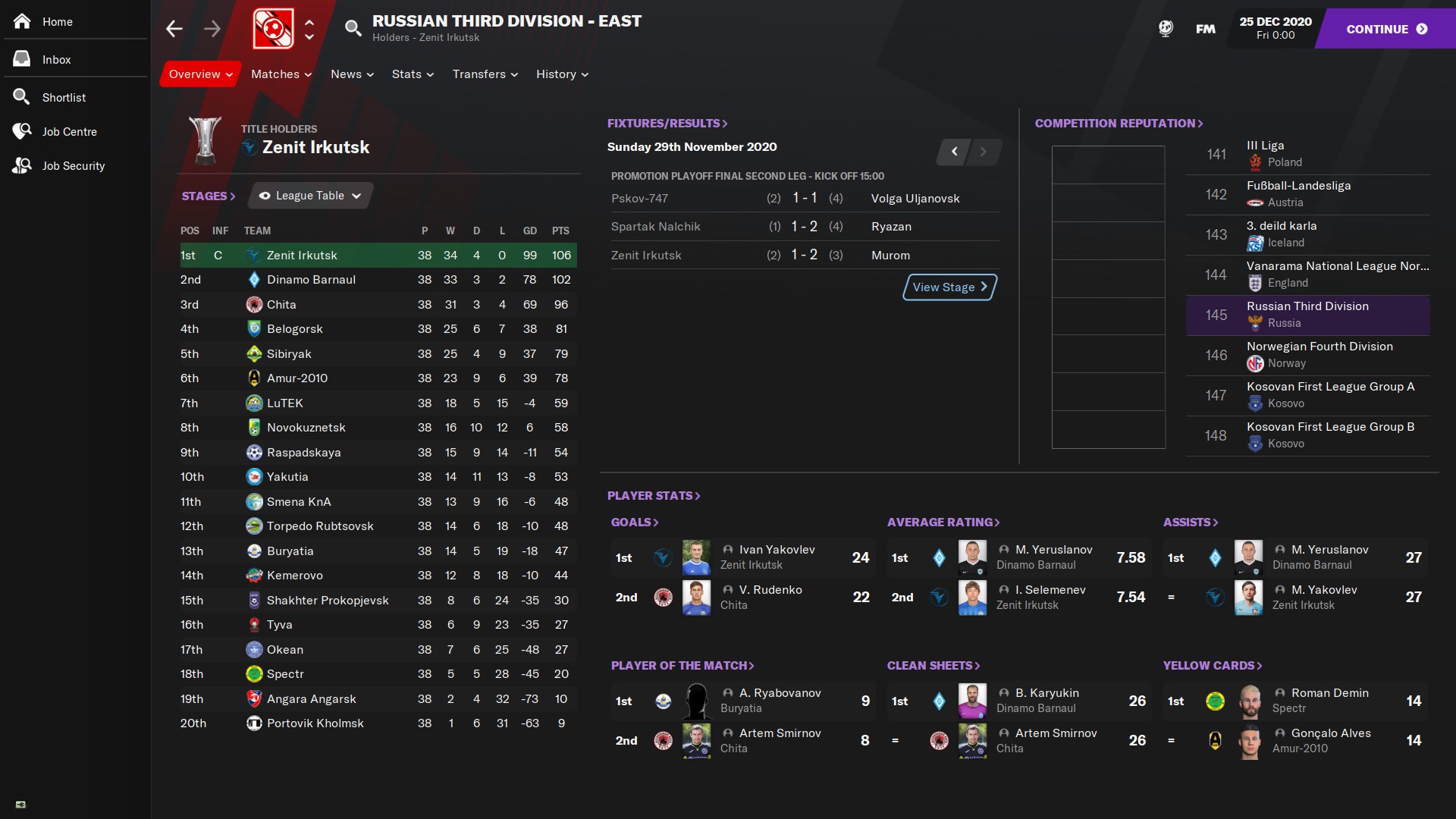 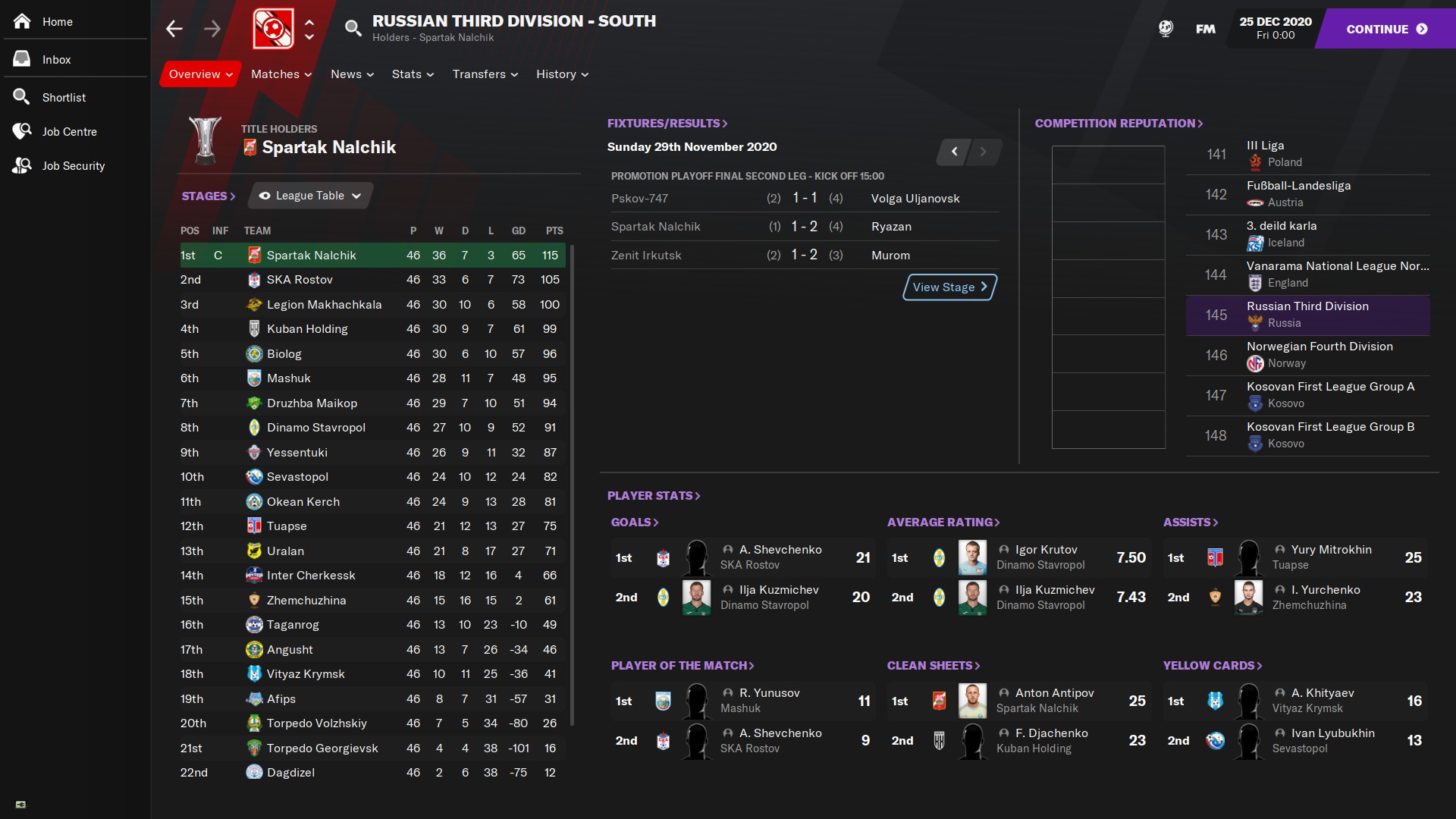 Finally there are the cups. Whilst the Russian Football Federation in real life has moved to a group stage to knockout format, I've decided to keep the format from last years' rework (mostly because it's made specifically to work with the exact number of teams there are on the reworked pyramid). The first round includes all Fourth Division and PFL sides, the second introduces the FNL teams and finally the third round sees the Premier League sides enter. A feature of the Russian Cup in recent history has been lower league sides often getting to the late stages of the competition and I wanted to keep this. The semis and final will be played at neutral venues with a capacity above 40,000. 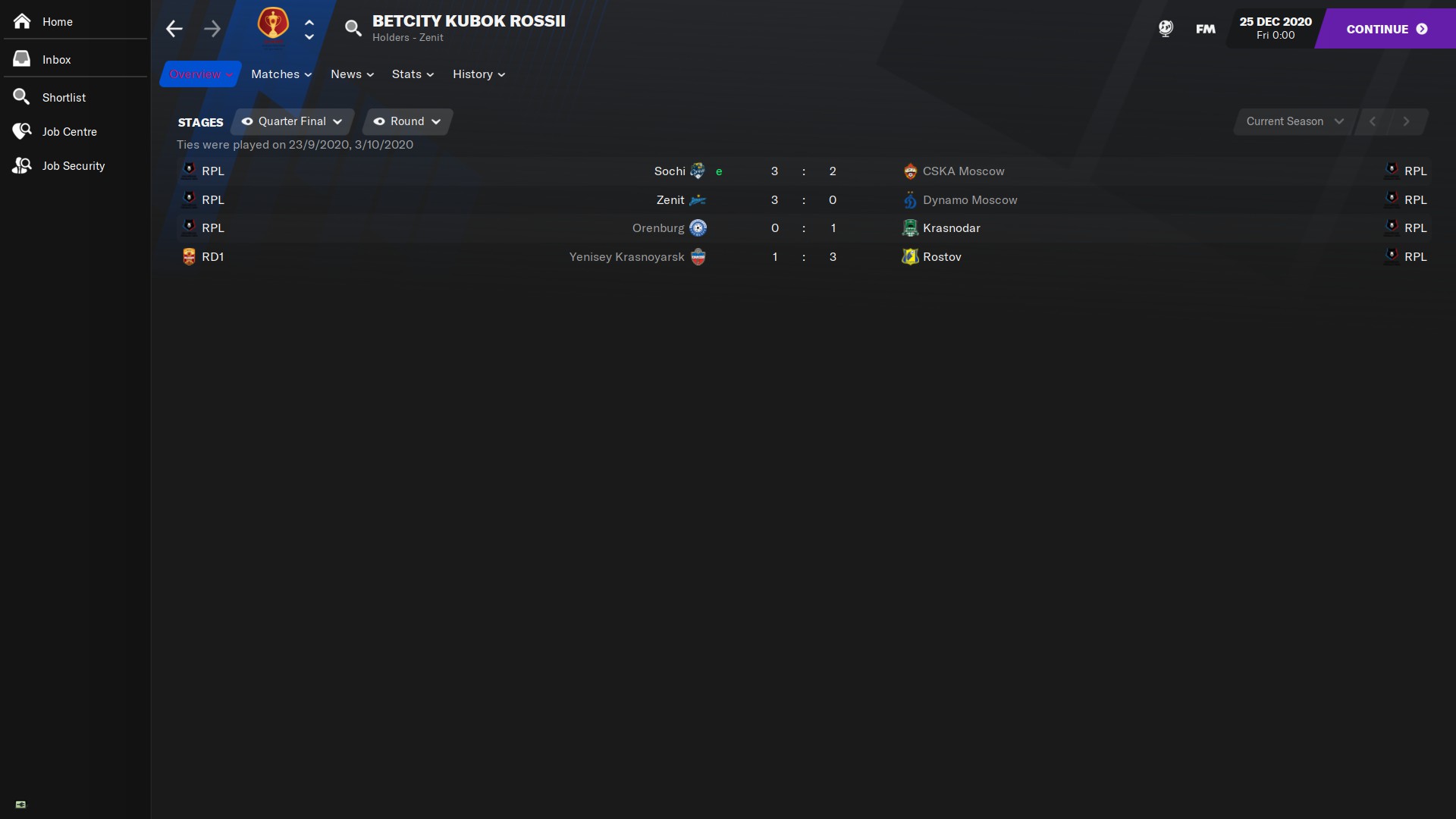 The Super Cup is what most super cups are - a one off game at a neutral venue between the league and cup winners at the season's start. (There really isn't much more to say about this it's very generic)

That's that, I hope you enjoy the rework! If you have any questions please just ask