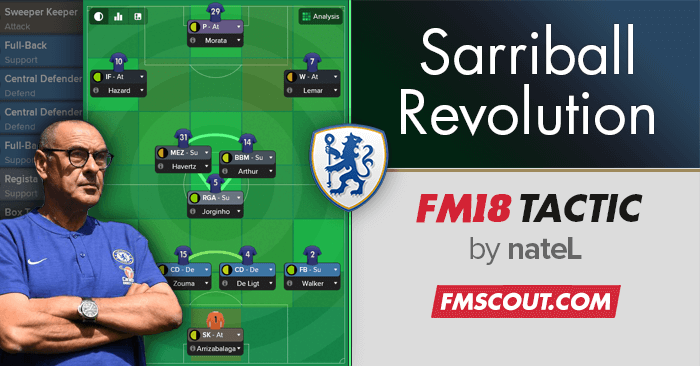 I may have cracked Sarriball. Beautiful realistic football.

I am a﻿n avid Chelsea fan and I am fascinated by Sarri's tactic especially using a Regista in the 4-3-3 or 4-5-1 formation.

After a lot of trial and error and almost giving up, I have stumbled upon a ridiculously beautiful tactic.

In previous iterations, I was never satisfied with the movement of the two midfielders above the regista, but I believe I have finally unlocked the ME to produce realistic yet effective and beautiful football. ﻿

My only gripe is that the possession hovers around the 55-60%. Other than that this is the most beautiful football I have ever seen in FM match engine. Please give it a try and comment your results and findings.

Before December, I was using a mix of a different 4-3-3 and 4-2-3-1, but I was not satisfied. So instead of a minor tweak, I revamped the roles and the team instructions. My season is going on and it seems to work really well. This save is in my second season at Chelsea as you can see in the transfers. Please note: This is not an overachiever tactic but my sincere approach to replicating a realistic interpretation of Sarriball﻿﻿ (Chelsea version and how they play in real life). You will need good enough central midfielders and regista to make it effective. Somehow Leicester seems to be my Achilles Heel. Other than that we look fine.

For attackers: One twos, killer balls, beats offside trap.
For midfield: killer balls, long range passes, switch ball to other flank, one twos
Regista: all above (midfield) with dictate tempo

Here are two goals that we have scored in the Champions league semi final first leg.

This tactic is purely the result of trial and error. Initially I made it standard and control with flexible/fluid. But the thing is that the movement of the players was pretty unrealistic and static, especially when the other team has possession. We always try to implement high pressing, defending in the opponents half (most of the popular tactics I've tried) but with the previous settings, they don't cover the open positions/zones left by the teammate who closes down the opponent.

It had me furious at many games with something so obvious yet the AI (of our team) decides not to move. So I went all out and just tried an attacking tactic with that was fluid with roam from positions to cover any empty spaces and hope for a total-football esque game. At that point I didn't even care if it worked because I was already frustrated at the ME. But it turned out pretty well as it unshackled my players to move and cover for the others.

I also made them dribble less as I wanted a more tiki taka in the mix. I know a lot of people say that these instructions are not necessary as the roles of some attacking players have them, but after a lot of trial and errorIi found it actually worked for me in this tactic with this formation and these roles. Even the poacher, which in other formations usually is a selfish player, in this tactic worked really well. He is quite the creator for the winger and inside forward.

The regista is regista, we all know. Not the main creator in my tactic. But the dictator as in the current Chelsea. He is responsible for the movement of the ball in the midfield. I chose mezzala because I want the player to move vertically when the inside forward is cutting inside so that there is an open space in the wing. For the other central midfielder I chose a box to box player as I find his movements realistic and fitting with my formation and also due to the fact that it really clicked well.

With these roles and instructions, the pressing of my players is now realistic and pretty effective. I specifically did not want to use sitter roles with defend instructions as it makes the player hugely immobile thus not helping in possession nor pressing.

The main source of key passes are the midfield duo and the wingers. These four players send crosses and key passes all over. I highly recommend that you don't tweak the tactic. Make it fluid and let it run its course, you'll be entertained.