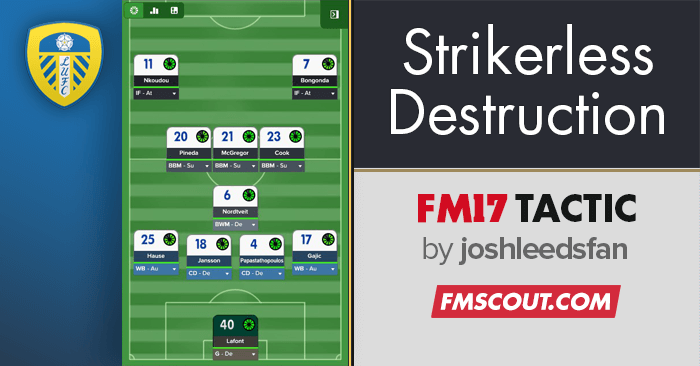 I've had a hard time utilising strikers in this edition and in this save I was no different. 3 games in to a new season, I'd already lost confidence in my strikers to be effective. So picture this, we're 1-0 down at newly promoted Charlton Athletic and we've had a man sent off. Having never gone strikerless before, I thought I'd try it given we had little else to lose. Off goes my striker for another midfielder (it was a midfielder who had been sent off). My wingers were already set as inside forwards under the old system. We won the game 3-1, with Nkoudou bagging two goals.

I thought this was luck so I carried on under the old system and continued to struggle for results. We came up against Fulham midway through September who were flying high at the top of the league. We were doing well, holding them off and creating chances of our own, but the striker was failing to produce the goods once again. So I took a gamble and threw on an extra midfielder in place of the striker, again with my wingers already set as inside forwards. Who should pop up but Nkoudou with 8 minutes to go, to give us a 1-0 win. I reverted to the old style for the next league game and got hammered 4-1 by Derby.

It was at this point that I realised that not only was the strikerless system a solution to my striker problem, but a system that no other team had a handle on, and a tactic in which ambiguity was one of the main advantages. It was after the Derby game that I set up this tactic to be used on a permanent basis. Between then and February, we'd lost just twice in the league and the rest is history. The formation focuses on overloading the box when on the attack, and getting bodies back when defending. Your midfielders will have to know when to get forward and when to drop back, so as to avoid congestion when your inside forwards cut in from outside. Particularly effective on the break, as you have your front five flooding forward at a time when the opposition are short on defenders.

Equally important are the wing backs. These will provide width, and become a very useful option for a pass when the middle of the pitch gets congested. Obviously, they need good crossing attributes. If you have particularly attack minded wing backs, you will find they tend to slip under the radar at the far post when the ball comes in from the other side.

Your inside forwards must be able to dribble and finish, as they're not just supporting a striker this time around. I've had a lot of joy with Georges-Kevin Nkoudou, who can initially be obtained on loan. He finished the Championship on 26 goals in 41 appearances, and has had a decent record in the Premier League as well.

This can be equally effective with wingers and inverted wing backs. For example, on the right I also have Federico Mattiello who is an inverted wing back, with whom I'll usually use a winger. It's a handy way of mixing things up and keeping the opponents guessing This is a fluid tactic, as it requires your wing backs to be complicit in attacking moves, and your midfielders must be involved in all phases of play. It focuses on stamping your authority on the game, getting into the face of the opposition and breaking down the wings. The mentality depends on the strength of the opposition. Against stronger opponents, I tend to use counter and change the defensive set up to focus on marking rather than closing down. The breakaway remains the same. These are the final league tables from the two full seasons in which this tactic has been used. After finishing 17th in the Championship in 2017, we were expected to have a largely average season once again. Even I only expected us to finish somewhere outside the playoffs. Nevertheless, we went up as Champions, and had some impressive results in the FA Cup, beating Everton 4-0 and Sunderland 5-0.

In the Premier League, we once again surpassed expectations. I expected us to consolidate somewhere in the bottom half. We led the league by Christmas, and although we fell away in the second half, a 5th place finish was far beyond what I could have imagined at the start of the season.

We've also had some impressive results in Europe, which got us through the group stage. The main highlight was a 4-0 win at home to Lyon, followed by the 3-0 away at Celta Vigo.

I've been playing FM since 03/04 with the only exception being 05/06 (and FM09 if FMH for PSP doesn't count). You'll probably know me for my countless stories with Leeds United, although I do occasional stories on other teams.

Therefore, as you can probably tell, I've been a Leeds fan all my life (before anyone accuses me of glory hunting 10 years from now) and are often my team of choice on FM.