I generally don’t offer download-links for my tactics, mostly because I feel they have little or no added value when you don’t understand the reasoning behind the ideas and choices the creator has made. This also means that you will not only get a download-link, but a bit of a background story as well. I have dubbed my tactic Strikerless Sexy Football because that what the tactic delivers, just the way that pretentious prick Gullit envisaged it originally.

I have to admit, Gullit has a way with words. If his coaching skills matched his vocabulary and oral skills, he’d be able to rival Sir Alex. Sadly, it did not, so all the dreadlocked Dutchman has to show for his coaching career is an FA Cup with Chelsea and the coining of the phrase Sexy Football, which had fuck all to do with John Terry’s off-the-pitch antics. No, Gullit used this term to describe teams who played the game in a smooth, elegant and effortless style: teams comprised of artists who could evoke the highest spiritual consciousness through exceptional technique and intimacy with the ball.

If you think that sounds rather pretentious and exceptionally twattish, you’re probably right as well. On the other hand, I prefer to let videos do the talking for me. Just have a look at some of these moves and then tell me it’s not fluid, smooth football, indeed the sexy football Gullit was ranting about.

I reckon that covers the bit where I explain the title of the tactic. Sexy football because of the smooth passing and fluid player movement. I guess that leads me to the formation I use, which is a narrow strikerless 4-1-2-3. 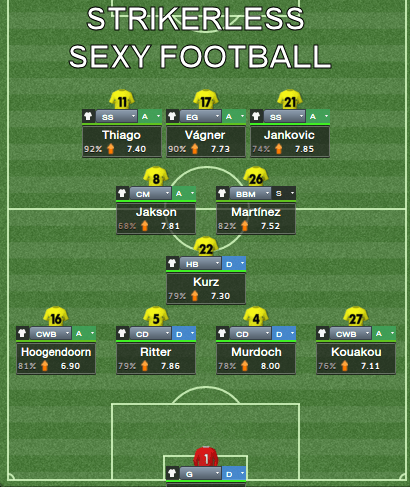 The formation I have picked is, for me anyway, the ideal formation to generate the maximum amount of movement and overlap, so we can overload opposing teams in key areas. What you want to look for are a few wide players to stretch the defence, a central passing outlet for the central defenders and a tight midfield for maximum effect in playing one-two’s. If you look at a heat-map for the formation, you can see why I say this. 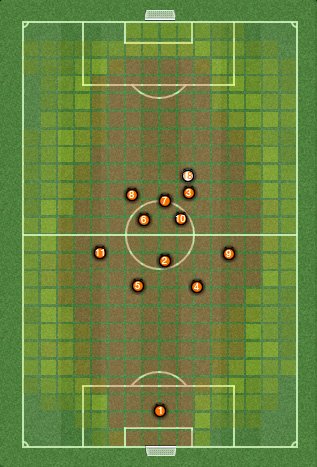 The half-back screens in front of the central defenders, providing a disrupting factor for attacking midfielders in a defensive sense, as well as acting as a passing outlet for the central defenders in an attacking sense. I am well aware that the defenders could just pass it towards the wing-backs, but I prefer the first pass to be towards a more central player, to prevent an opposing team from closing down all passing lanes too easily.

Going forward, the team’s forward trio are close together. The middle of the three acts as an Enganche. With slightly tweaked instructions, I hope he can act as a sort of Withdrawn Targetman in the attacking midfield section of the pitch. I have dubbed this player the Targetganche. The players flanking him are Shadow Strikers, who look to get on the end of a through ball or a flick-on.

With a distinct lack of strikers in any strikerless formation, by default you are going to rely on the movement of your midfield players to score goals. I want to look at overloading the oppositions defence. Overloading is a potentially powerful weapon, which can be achieved by both formations as well as team instructions.

As you can see, the attacking midfield trio is clustered closely together, which automatically gives them a numerical advantage against most opponents. They then look to overload central areas to facilitate building up from the back and through the thirds. With a lack of forwards, outnumbered in the final third when the opposition is prepared, this then means that the trio looks to play in between the lines in the final third and that the remainder of the team should look to break forward to support. The emphasis is very much placed on positioning.

The key player in this whole positioning battle is the Enganche, who is not the traditional hook betwee midfield and attack, because we lack an actual attack in the traditional sense. What I wanted was a cross-pollination of the targetman role and the enganche role. In a way, it makes sense, as the enganche already encorporates some of the qualities a targetman is supposed to offer to a team. Mix up the enganche and the targetman and ideally you get the Targetganche™, or the Withdrawn Targetman I want to see in the game. He will hold up the ball and bring his team-mates into play, choosing how and when to pass the ball to maximise the potential of the attacking movement.

In an ideal situation, I would be able to tweak the current enganche role to my likings. Unfortunately, I was unable to make the Targetganche hold up the ball as much as I would like to. Basically, the Targetganche showed two dimensions in his style of play. The first dimension means the Targetganche often takes a touch before quickly passing the ball along, instead of holding it up to ensure players link up or move into advanced positions. In a match, it would look a little something like this.

It looks like a fine goal and the Targetganche really plays an important role in the whole attack, setting it up from midfield and ending the attack with the assist for the goal-scorer. When you break down the move, it shows you the beauty of strikerless football as well as, on a slightly unrelated note, why I’d love the Withdrawn Targetman to be an actual new role in FM15. 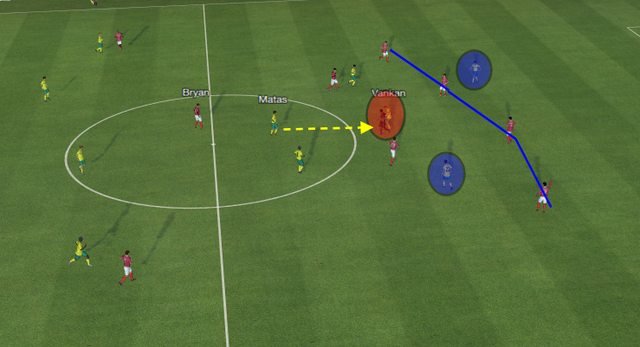 In the initial stage of the attack, Targetganche Vankan, highlighted in red, plays as a proper targetman, his back being towards the goal and he has actually dropped back into attacking midfield, whilst the two flanking Shadow Strikers, highlighted in blue, have taken up advanced positions, one of them even in an off-side position beyond the AZ defensive line. In an ideal situation, the Targetganche can hold up the ball to have the players take up attacking positions, before flicking the ball on towards the Shadow Strikers. Sadly, despite being asked to play risky passes, Vankan swivels and looks for a short option. 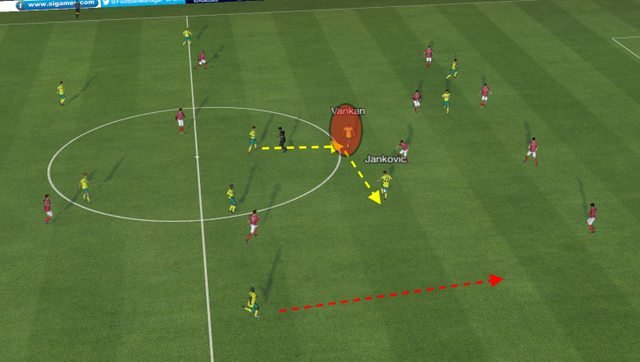 Vankan swivels on the ball and plays a short pass towards one of the central midfielders, Jankovic. The Shadow Strikers are still in advanced positions, even though they have clustered together on the left side of the attack. Towards the bottom of that screenshot, you can see the right wing-back making a threatening run forward. 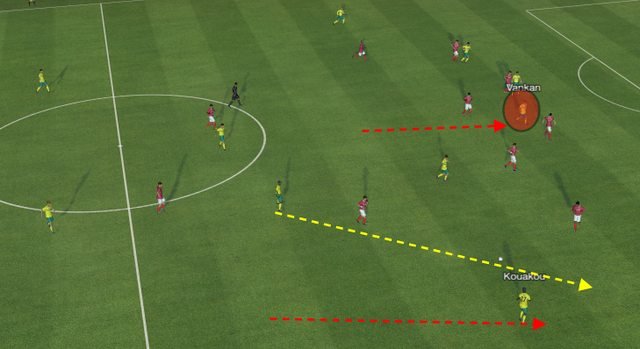 Jankovic passes the ball back to Vagner, who indeed recognises the run made by the right wing-back and plays the ball towards Kouakou. Vankan meanwhile is unmarked by opposing players and takes up a position near the edge of the box, looking to support the two Shadow Strikers. 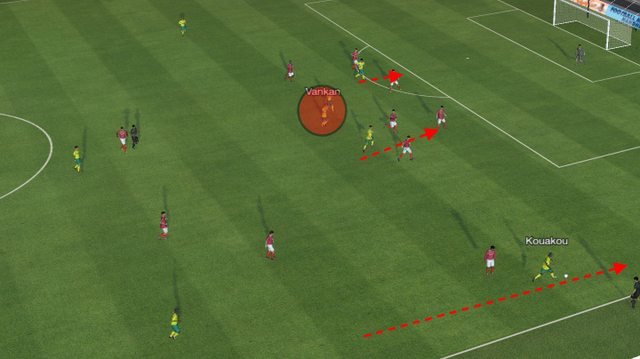 As Kouakou surges past an opponent, the Shadow Strikers take up advanced forward positions, with the Enganche remaining behind them and indeed being overtaken by the Central Winger linking up. Effectively, our four players are drawing the AZ defence close together, which means that a well-timed run can send a player clear of defence with no chance of recovery by a wide defender cutting inside. 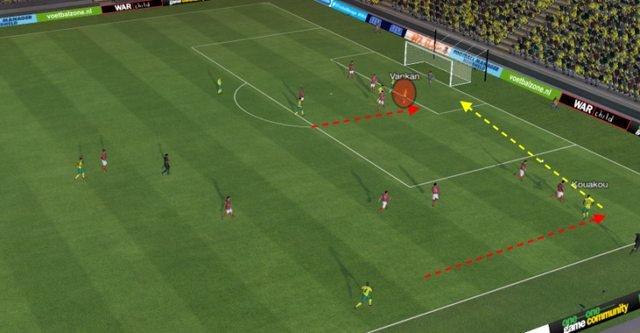 Kouakou’s run leads him to the back-line and draws out two defenders. With the defenders focussing on the advanced forwards, the Shadow Strikers, no-one is actually paying attention to the Targetganche. Vankan surges past the defenders to connect with the low, driven cross by Kouakou. Making a run from the edge of the box, sees the Targetganche unmarked near the first post. 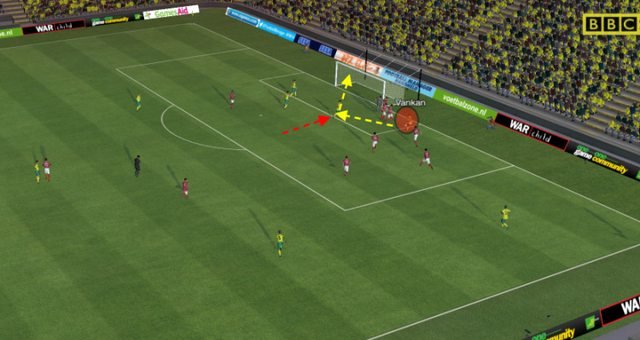 The cross comes in low and Vankan again swivels on the ball before laying it back for the onrushing Shadow Striker to tap into the back of the net. Whilst it’s hardly the way I actually wanted the Targetganche to play, it certainly does work against a team like AZ, where the opposition drops back and offers little or no space to actually exploit.

Oddly enough, the Targetganche seems to perform better as a mobile threat, connecting with crosses than as the actual bulky powerhouse, chesting down passes or flicking them on. In terms of actually holding up the ball, the Targetganche doesn’t really do it, instead taking only one or two touches before quickly passing the ball along.

Oddly enough, I’ve seen the actual Targetganche motions most in matches where the opposition pushes up and tries to actively fight us off, which is strange considering the fact that I wanted a role like this to break down stubborn defences all pouring into their own box. In the above video you can see the Targetganche play in the way I actually want him to play, the second dimension to his style of play. 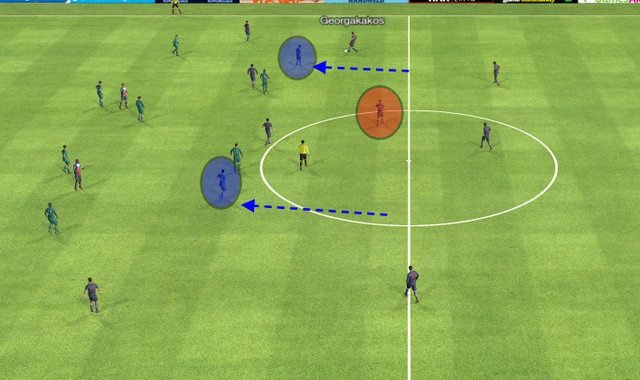 In the initial stages of the attack, the Targetganche, highlighted in red, takes up a more advanced position compard to the two Shadow Strikers, highlighted in blue. The Shadow Strikers try to contribute defensively by dropping deep, keeping up with opposing players who are pushing forward. The Targetganche is the advanced attacking focal point for the initial stages of the attack, looking to play in his team-mates. 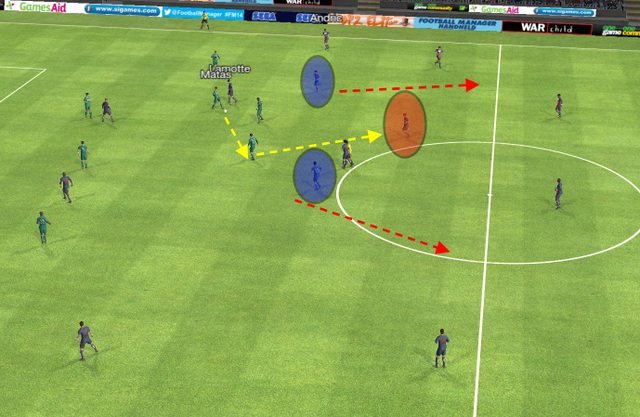 As Matas wins the ball, Vankan takes up position with his back to goal, whilst the Shadow Strikers are preparing to make their runs forward. A few easy passes will see Vankan in possession, at which point he can set up the attack. The movements by the Shadow Strikers also help to relieve the amount of pressure on the Targetganche, as defenders seem more likely to pick up runners instead of more static players. 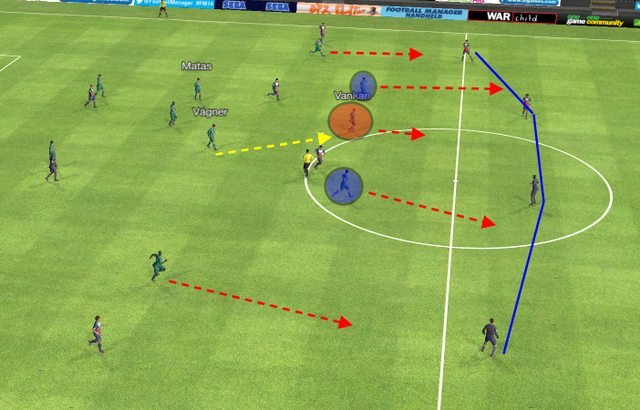 With the movement of the Shadow Strikers and wing-backs, the opposing defence remains stretched. The two centre-backs are supposed to pick up the Shadow Strikers, whilst the wing-backs are supposed to pick up the runs of their counter-parts. This means the defensive line has to stay wide, allowing for gaps in the defence. When the wing-backs would cut inside to help the central defenders, they would cede the wings, allowing our wing-backs to dominate the flanks. 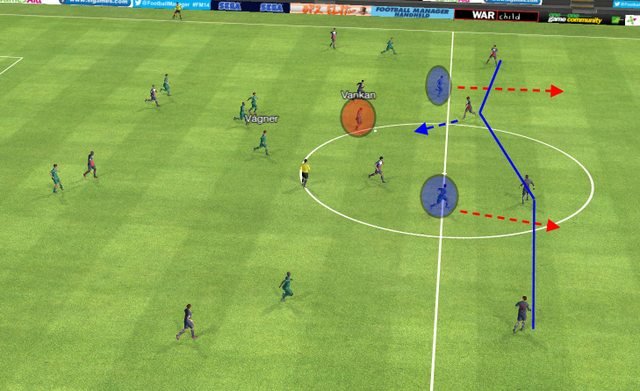 In this case, Vankan actually does hold up the ball and he dribbles forward. One of the central defenders actually steps out to take on Vankan, allowing the Shadow Striker space to move away, effectively breaking the defensive line. Because the defence is stretched by our own wing-backs, there is no-one in the direct vacinity to cover the run by the Shadow Striker. 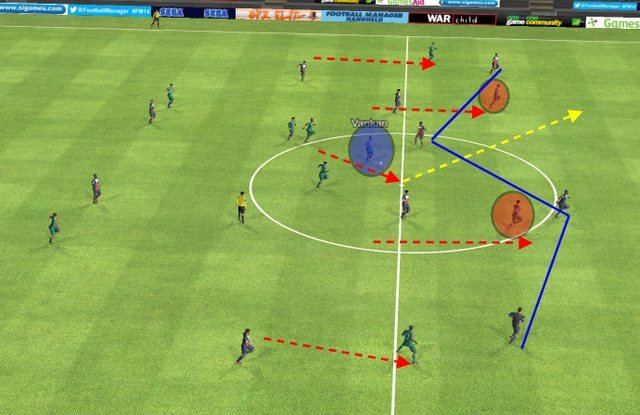 Vankan keeps hold of the ball long enough to allow the defender to step out quite far, allowing the Shadow Striker a lot of time to make his run into space. Just before Vankan actually gets pressured, he can release an easy through-ball into space for the Shadow Striker to pounce upon.

On that note, I feel I have pretty much explained how the tactic works the way it does. This leaves me with just a simple download link. Click the big red "Download Now" button at the top to grab the tactic.