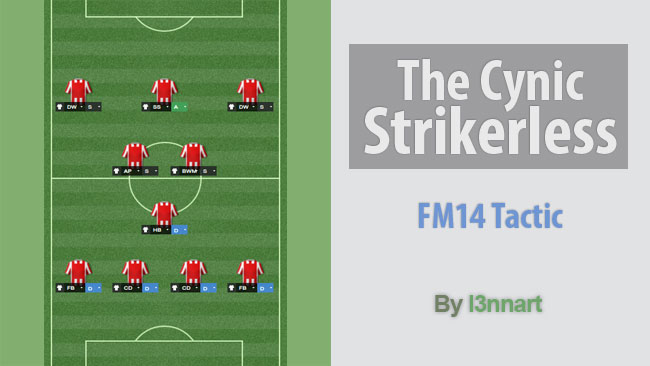 Background
I've always been a hopeless romantic of all out offensive football, trying to create tactics based on 'Overload'-mentality and searching for a tactic that will bring me countless goals. Seeing how my teams often had great possession and most of the chances I figured it was just a matter of the last tweaks before I found my perfect formula - believe me, it doesn't exist!

Finally I gave up dream and took The Special One's advice:


'If I want to win 1-0 I think I can, as I think it is one of the easiest things in football. It is not so difficult'.


This tactic is far from my dreams of the perfect offensive monster, but it's also the far most effective one I've ever used in FM. It has turned countless teams around and made them achieve things the squad couldn't even imagine.

I never thought I would be one to implement a tactic without a striker, but the shadow striker seems to be impossible for the opposition to pick up as he always comes running into the area instead of standing there waiting like the average striker.

The secret is basically two functions within the tactic. The first one is very fundamental: a sturdy defense. It's very much a cliche, but finding ways to keep the opposition from scoring year in and year out isn't very easy at all. Almost every season that I've used the tactic, the next best defensive team has conceded almost twice as many goals as my side. The second function is a counter attack mounted from early interceptions high up in the pitch. Most of my tackles are carried out by the midfielders whom makes the middle of the pitch a living hell for the opposition. Once the ball is won my wingers and shadow striker attack the area with full strength and surge into the inevitable cross.

The Players
Just follow the in-game advice for each role. The only position where I think you should consider other attributes is the AMC and in some extent the wingers. As the offense involves a lot of crossing, jumping, heading and bravery may come in handy, as well as pace since it's counter-based.