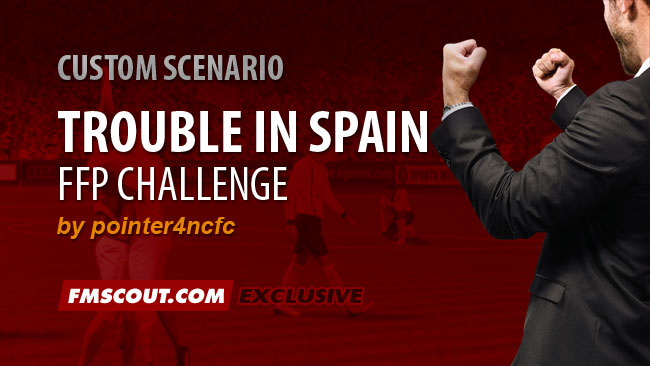 In my new challenge I recreate one I made for FM14 which many of you will have not seen before the challenge is to take Barcelona and Real Madrid to the top. Simple right? Or maybe not.

Recently in Spain they have been cracking down on teams spending money freely and those who have ignored FFP rules. All teams were warned there would be very heavy consequences if any team were found to be in breach of these rules.

A few months after investigations begun it was discovered that Barcelona had breached these rules. After the investigation continued to check other teams Real Madrid fans were enjoying seeing the imminent fall of their rivals until it was announced that they had also failed.

It was decided that they would both keep their place in the Champions League. But they would be relegated to the 3rd tier of the Spanish and would be heavily fined. These fines put the clubs finances in jeopardy and putting them both in Administration. Because of these actions taken against the clubs a mass exodus of players have paid out their contracts to leave the clubs apart from Messi and Ronaldo. Both players will look to take them back to the greatness they once were in.

Move the downloaded file Trouble In Spain.fmf to your editor data folder:

After a break from creating content for the community, I am back! (Pause for dramatic effect) My databases alone have amassed near 20,000 downloads, the graphics I have made for different Megapacks have not been tracked.