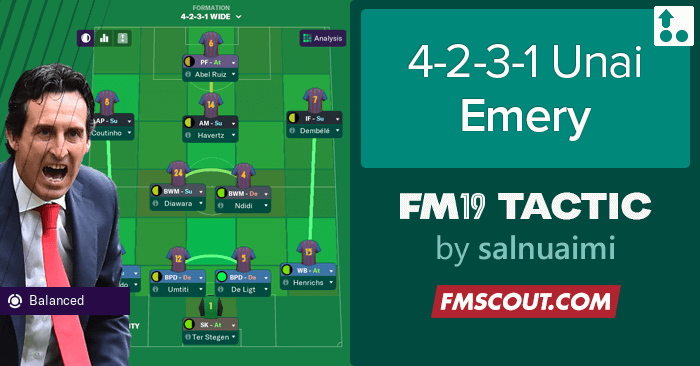 Unai Emery is a manager who likes structured football however does not get scared of altering his tactics during the match to overcome his opponents.
A thing that we did not feel with Arsene Wenger as Arsenal fans!

In my tactic I have tried to imitate his way of play in arsenal given the fact Arsenal does not have pure wingers but Attacking midfielders who are pushed to play out wide . - The team is set to play wide football however I do change it to " Very Narrow" Based on the opposition.
- The team will play out of defense and the attacking transition will start from the BPD
- The team freedom is your choice based on the opposition however I tend to keep it as " Be more Expressive".
- No time wasting is allowed unless you score a goal and you would like to secure the match by switching it to " Defensive " Mentality.
- I strongly recommend to set your crossing setting based on your attacker . ex. For fast short attackers I tend to use low crosses.
- The team has to counter press and play with more urgency once winning the ball and this means that the defense has to be a higher line in order to succeed.
- With higher line of defense you will be prone to counter attacks and therefore ensure that your opponent opposition is set to cover the threat of your opponent by marking them tightly .
- Avoid assigning tight marking instruction to your BWM or wing backs. All the attacks will start from the back in a controlled manner. Where the goal keeper with distribute to center backs by rolling it out who will be both on BPD roles and should be able to pass the ball.

Formation do change to become 2-4-4 with both of the wing backs push forward . One with attacking duty and the other with support . The attacking WB will ensure to cross from by line specially that the winger infront of him is inside forward who will create space for him. For his coverage the BWM needs to be in defense and needs to have strong defensive attribute.

The other WB will be on support minimize his contribution to attacking play. The winger in front of him as actually a play maker with " Sit Narrow" instruction to create from the middle of the field given the nature of the players that I have . In this case Coutinho in Barcelona.
As for the BWM he will be on support as well with instructions to "pass it short" and " take fewer risk" . He is a player who will connect both defensive and offensive lines with pure simplicity . Counter attacking football can kill you . And this is the scenario with Arsenal and Unai Emery. But its a risk that you should take. The moment you feel that the game needs securing please do not hesitate into withdraw your play maker and playing a DM with Man marking instructions.

The formation will relay highly on " offside trap" and therefore ensure that your center backs are FAST ! if not you will be exposed. Give the formation the time to settle in and be familiar. The formation has high intensity set up and specially affecting the Wing backs therefore choose your players wisely.

Ensure that you switch between " Wide" and " Very narrow " and " Low crosses " " Mixed crosses " Instructions to discover the difference in play and choose whatever is suitable.