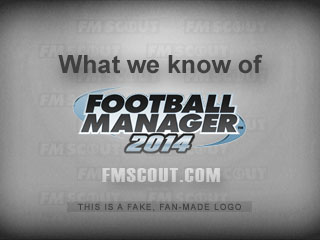 We created this page for your convenience, the go-to place when you just need to check everything we know about the upcoming release of FM 2014.

This is a summary of all official news as well as answers to frequently asked questions about Football Manager 2014.

This page will be constantly updated, so check back here often

Sports Interactive's studio director Miles Jacobson is the only person who shares official news about the game. The details below are all originally posted on either his Twitter account or his Facebook profile.

http://cdn1.iconfinder.com/data/icons/Futurosoft%20Icons%200.5.2/16x16/apps/ubuntu-logo.png Support for Mac, Windows and Linux with crossplay
"As well as being on Mac and Windows, it will also be on Linux. With crossplay. One price for all 3 - so if you have a Macbook, Windows laptop and Linux desktop (for example) you'll be able to play the game on each of those machines via Steam.
For the more technically minded, the flavour of Linux we'll be supporting it Ubuntu 12.04 (LTS)"
25 May 2013 - Source

Feature set for this year's schedule has been finalized
"Have just finalised the feature set for #FM14 to fit in with this years schedule. Happy. But no, I'm not going to reveal anything yet..."
13 Mar 2013 - Source

We understand that you naturally have many questions in regards to the upcoming game. Here we'll be answering the most frequent ones.

When is FM14 released?
Officially, no release date is set. Not even a rough or estimated one. It's frankly too early to have a date. Unofficially, it's a common secret that late October / early November is the likely time-frame for new releases of the Football Manager series.

I have suggestions to make that would make the game better. Where to post them?
We have started our Football Manager 2014 Facebook fan page as the main channel you may use to post your feature requests. Our staff members monitor your suggestions there, pick the most interesting ones and then add them in a single article which gets updated every week.
Keep track of what we consider to be the best feature requests here:
? Football Manager 2014 New Features we'd like to see

You may as well post your feature suggestions / requests on the official Sports Interactive forums (free member account is required). There is an official thread for this very purpose:
? What's that? A new Wishlist Thread? What you would like to see in future FM versions.

But surely the good people at SI are monitoring the suggestions posted all around the scene (not just their official forum), especially when the largest fan-sites (hint! hint!) take time to compile "best of" articles about them.

Please get rid of Steam!?
SI/SEGA used Steam in an effort to take a stand against piracy. Looking at numbers (of sales/profit), that move has been successful. Pirate copies failed to work properly at least in the early stages post-release, especially with Football Manager 2013. With the added profit, SI was able to expand their studio by hiring more people to work on the game. So we can see the Steam platform to remain as a requirement for years to come.

Is there an official FM14 logo and pack-shot leaked already?
No. We purposely design fake, fan-made logos and pack-shots of upcoming FM every year for fun. Sadly, there are people who try to copy what we do and present it as exclusive or, even worse, official information. Simply ignore them.

For the record, this is our fan-made logo for FM14.

Why can't we have logos for every team?
Licensing issues. Unfortunately, it's not easy at all to secure licenses for every team in the game. Some of them don't even have official club names for the same reason. The same applies to player faces and to national teams having fake players.

Please add more languages and/or leagues!?
SI have already confirmed the addition of 2 new languages in FM14, which is a result of record sales in both countries. And this is basically how that works. If sales in your country (where native language is not already in FM) exceed a certain limit set by SI/SEGA, then chances are your language will be added in the next FM installment.
I think a similar principle should apply to leagues as well, but with the sales requirements being lower.

Discussion: What we know about Football Manager 2014