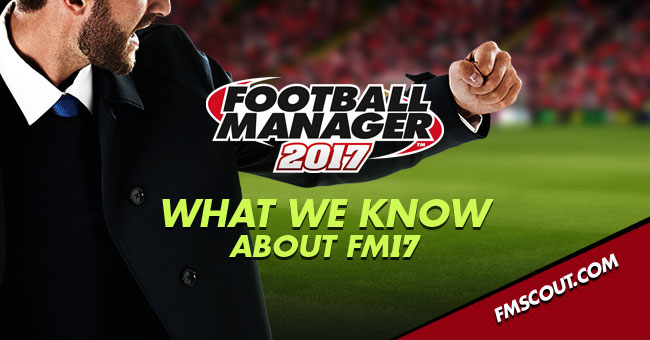 This page was created for your convenience, aiming to be the go-to place where you can be checking everything we know about Football Manager 2017 during the pre-release period.

The long awaited proper FM17 features video announcement is currently in 1st draft and shall be ready to be released mid week next week. It's going to be quite lengthy (32 minutes).
7 October 2016 - Source 1 / Source 2

Miles Jacobson had announced that a couple more match engine videos would be revealed during the week 3-7 October, but they have been postponed following up on the initial video's mistake that triggered a storm of negative reactions.
7 October 2016 - Source

Football Manager 2017 New Features & Improvements.
We made a list of all the new and improved features we spotted by watching the video and by following the official Twitter account of SI's studio director.
19 September 2016

Can my computer run FM17? It runs FM16 no problem.
According to the official product page on Steam store, here are FM17 minimum system requirements. However, Sports Interactive insist that these are not the final specs, which should be revealed closer to the time of release. They admit though that if your computer runs FM16 okay, you should be fine with FM17.

Can you play FM 2017 on the Apple iPad Pro?
Still unknown. Sports Interactive haven't released a list of compatible devices yet.

Will FM17 come to PlayStation or XBOX?
No. Sports Interactive have no plans to make console games currently.

Discussion: What we know about Football Manager 2017