The DB is already 100% stable and feature complete; and I'm already in my 3rd season.
I've created 24 new competition logos for the following divisions:

I created these logos so I don't have to look at the boring old FM generated logos.
Some of these logos are only shown at the end of the season when the promotions/relegations are announced.
NOTE: There were already 43 competition logos for all the main divisions, this just adds logos for the reserve/B-team and U19 teams as well!

Anyone already with a save game can just replace their 'graphics/WSL' folder with the new files.
You will need to 'clear cache' and 'reload skin' for the new logos to show.


Building on 3 years of experience (ESL17, WSL18, WSL19), with over 23,000 downloads and Steam subscriptions, welcome to the next evolution of the World Super League.

After 1 year of planning; 4 months of work (most of my free time) and over 1,000 hours of testing; this is the most ambitious FM super league I've ever created and probably the most challenging (and rewarding) FM experience you'll ever have!


WSL is a 'Super League' that replaces all the leagues in England, with a custom league structure where clubs from all over the world play together. There are custom leagues, cups, awards and graphics (custom league logos and backgrounds). The top 500+ clubs from around the world are included, as well as all 160+ playable clubs from England. All clubs compete in one of several UEFA Leagues; and they all have a B-team and U19 team.

This is also the highest quality and most advanced Super League mod available; written by a software developer, who actually plays it for 1000+ hours each year!

Goals for this edition: 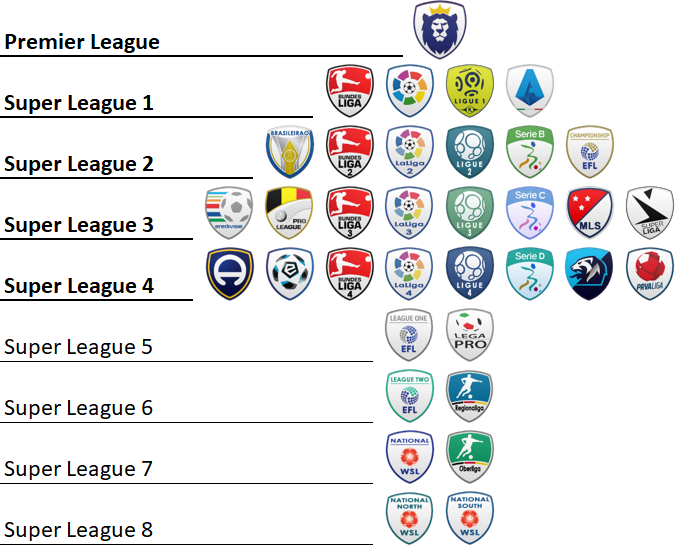 
As you can see from the new league structure this year, the league consists of various regional 'themed' leagues in a single league structure.
For example; the Bundesliga division will have mostly German clubs, but it will also include clubs from other countries.

The idea behind this is just to give the 'feeling' that leagues from around the world joined together. Each league has a different theme, color, background etc.

However, all clubs still play in England!


Note: This is not the full list of clubs! 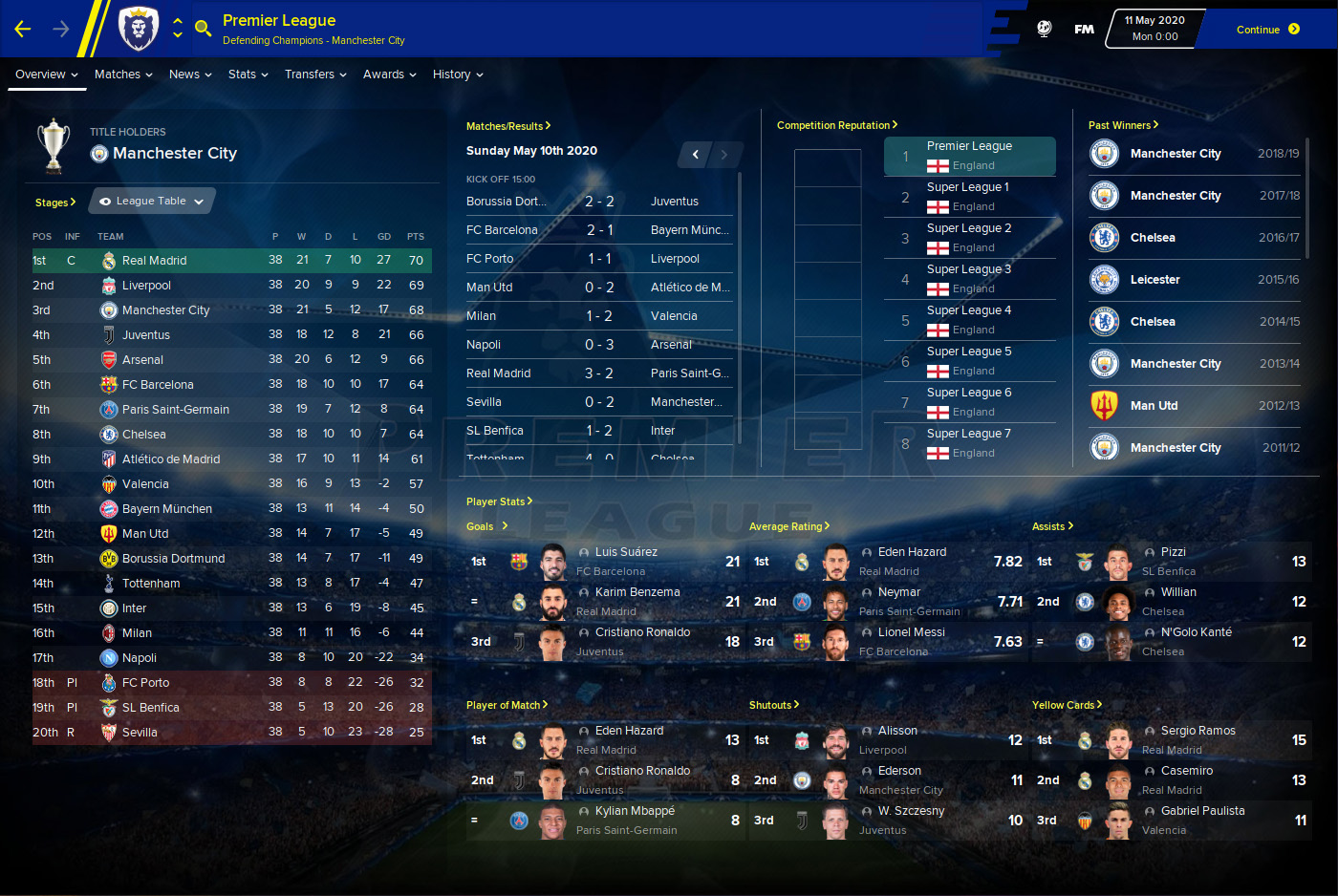 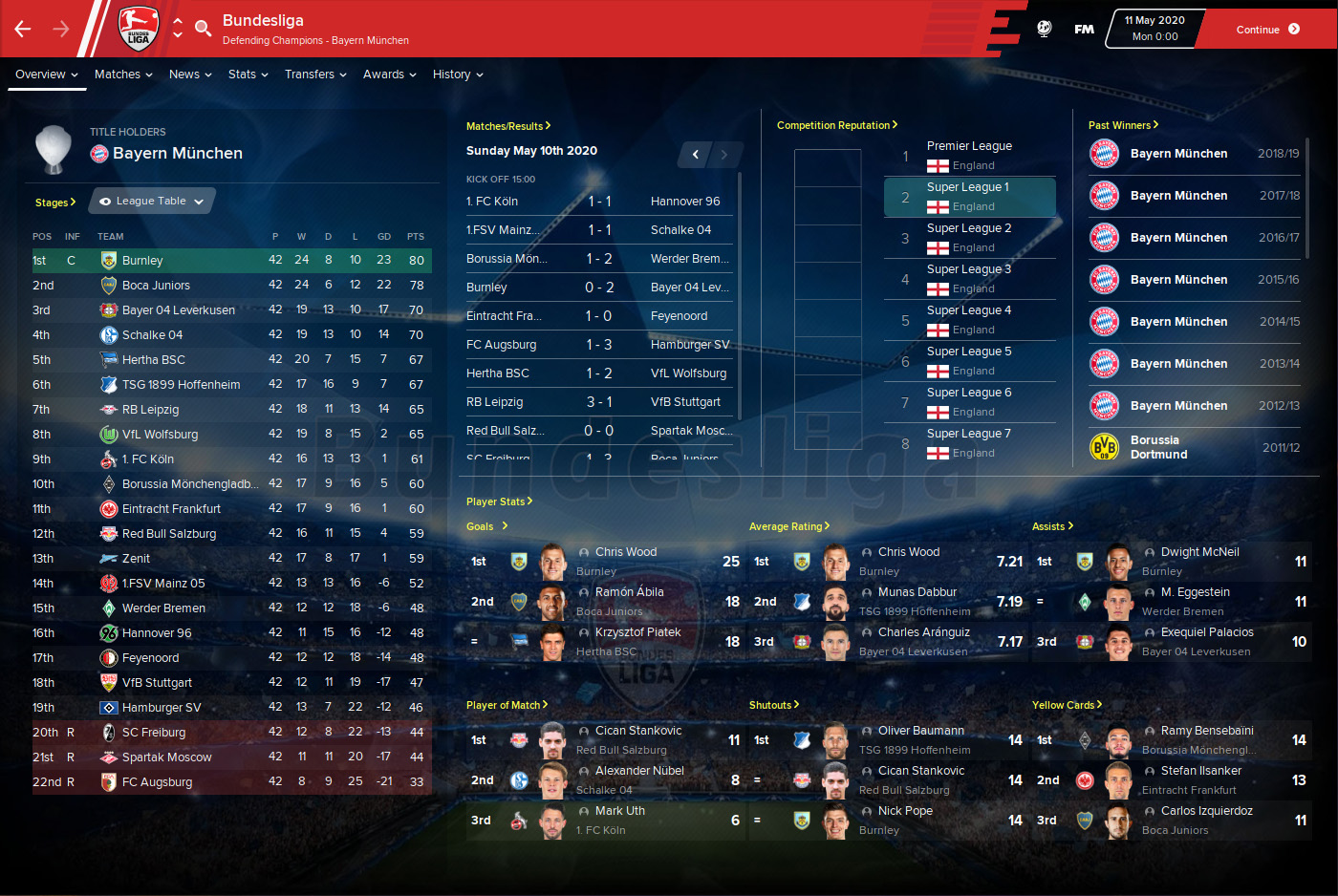 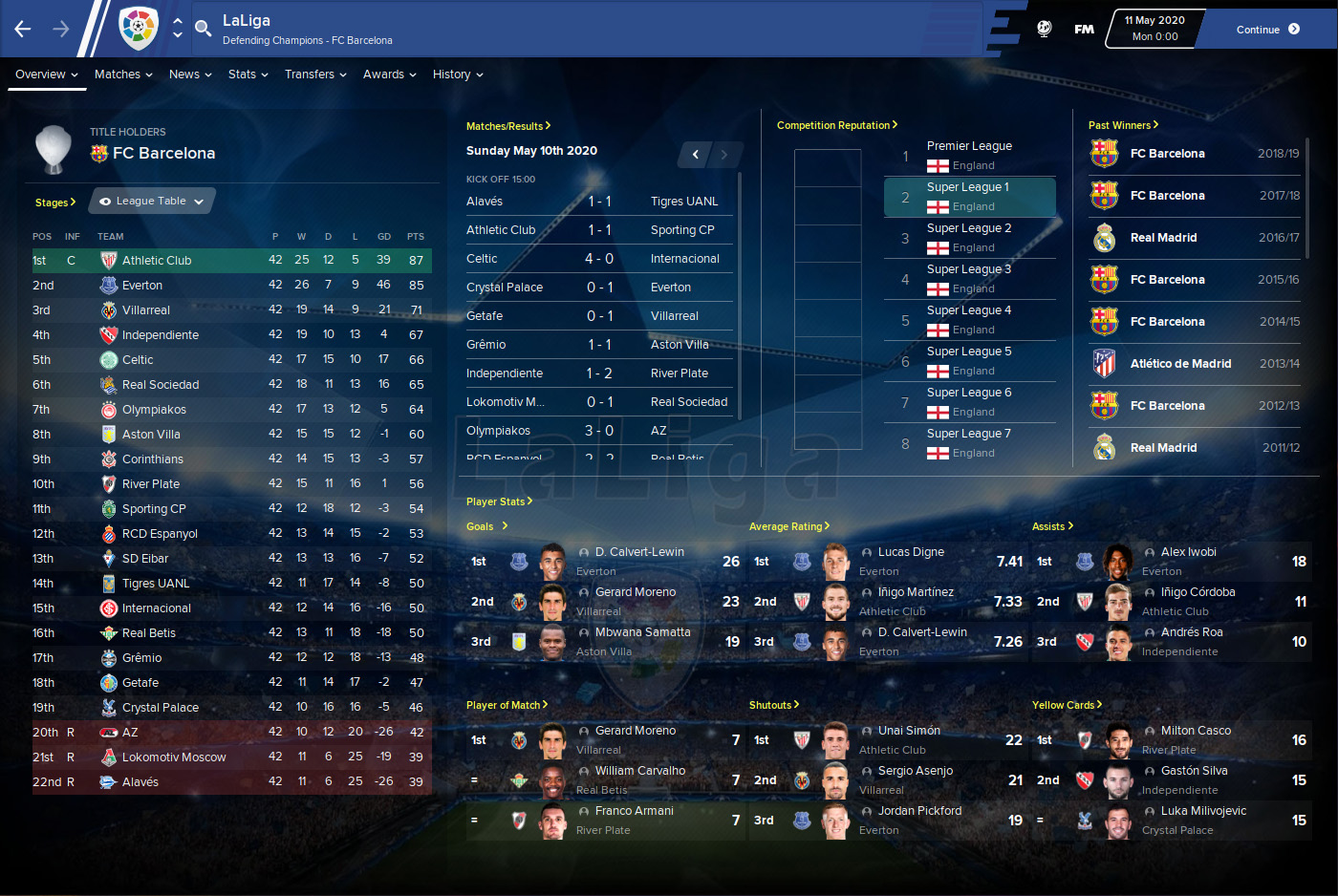 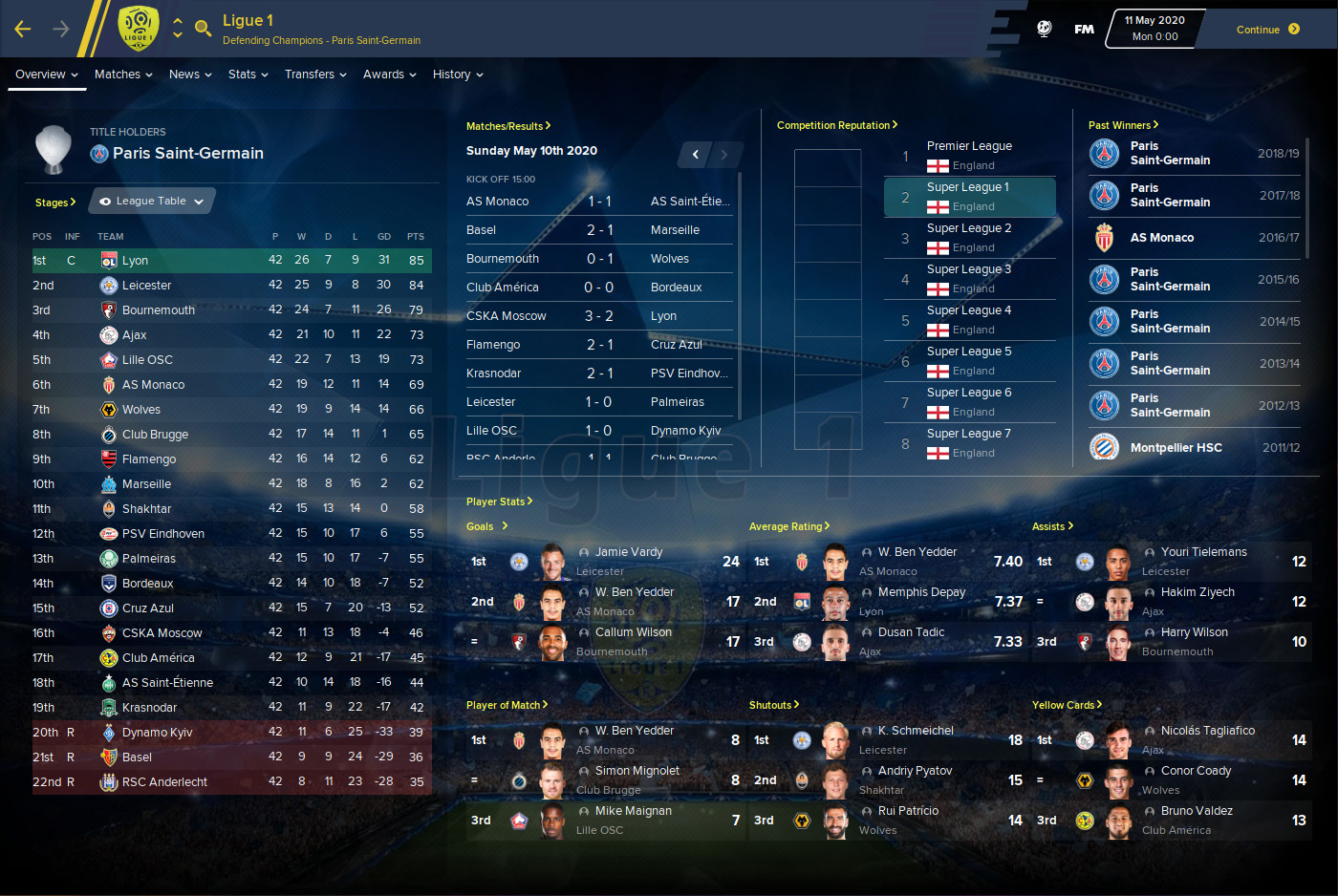 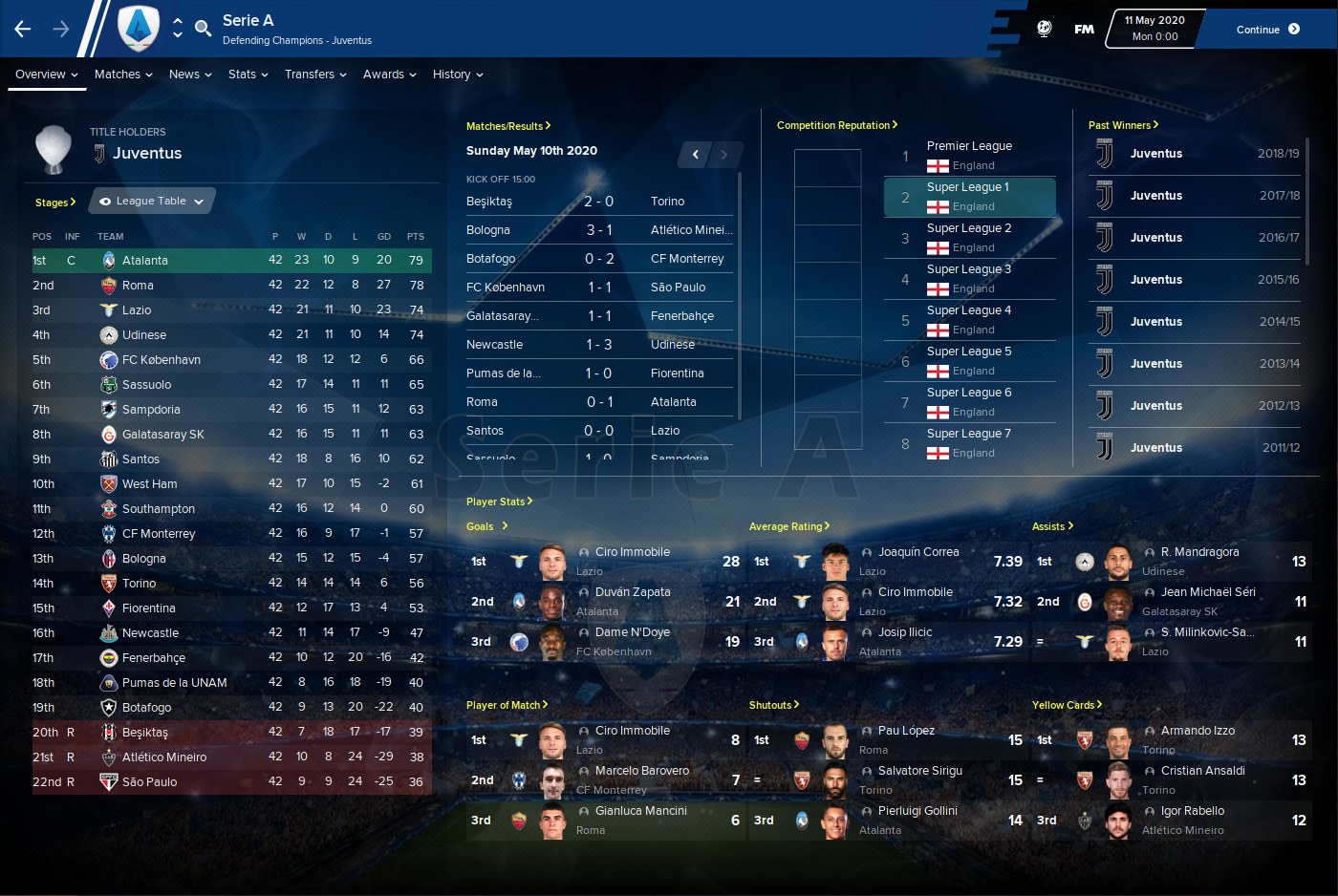 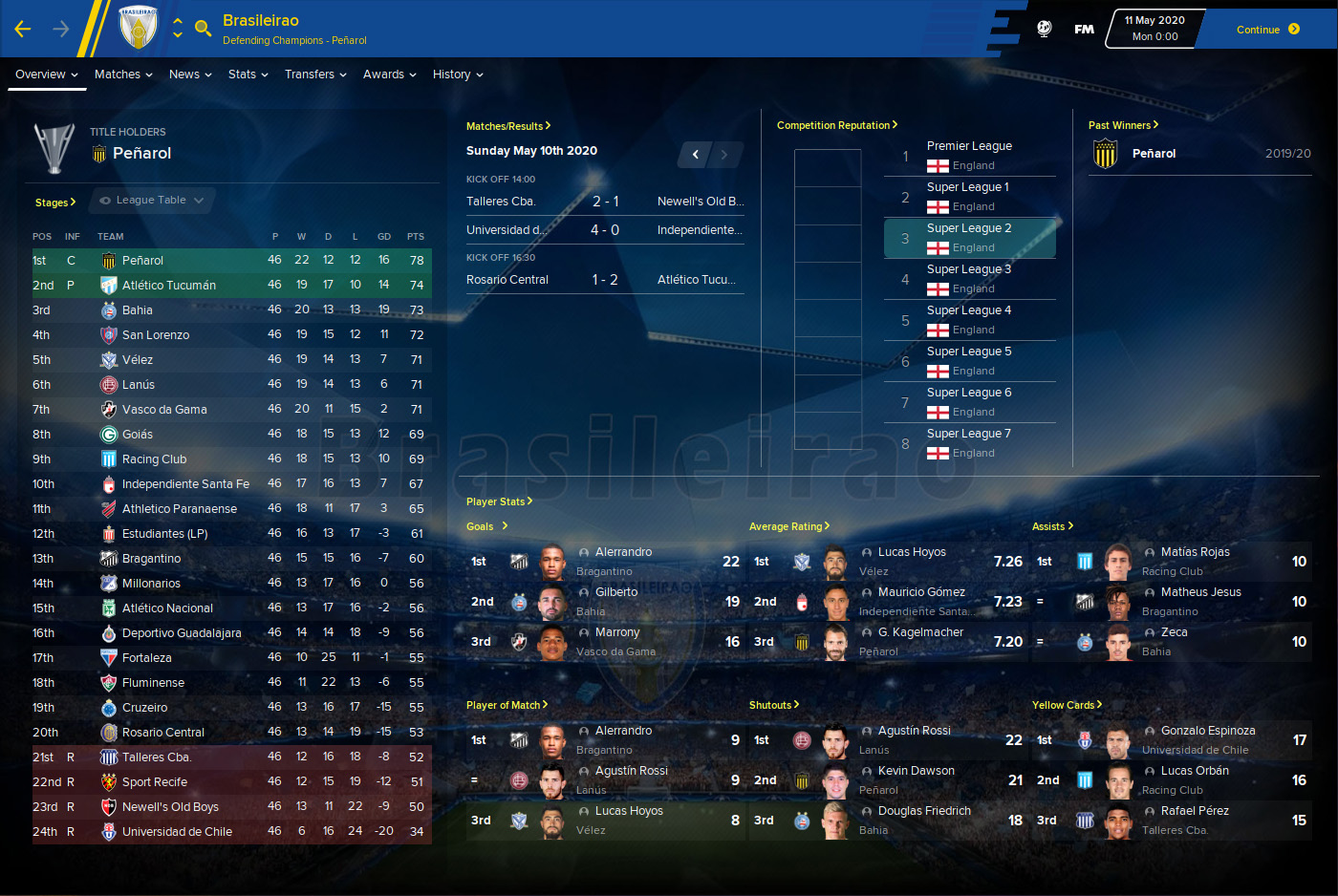 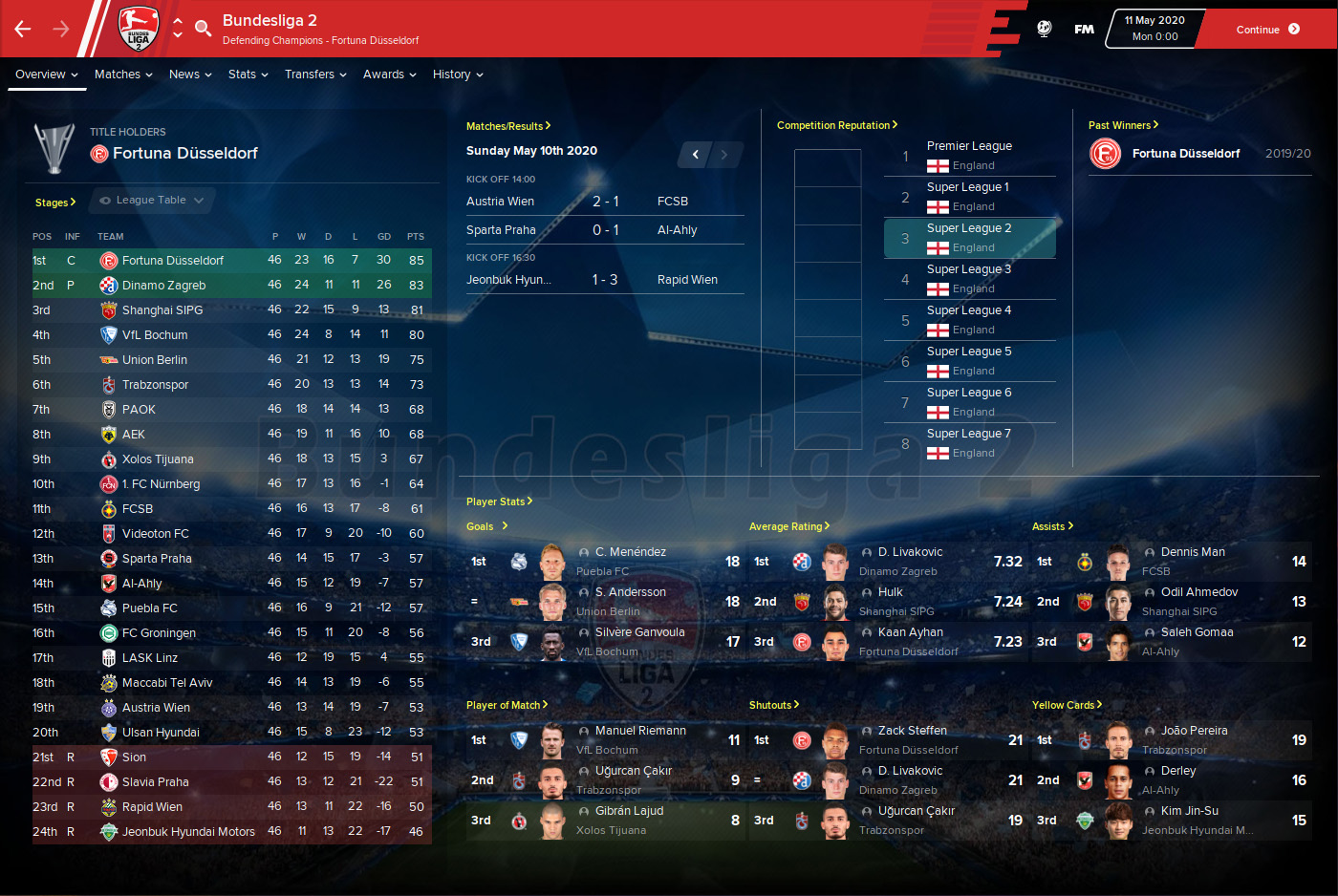 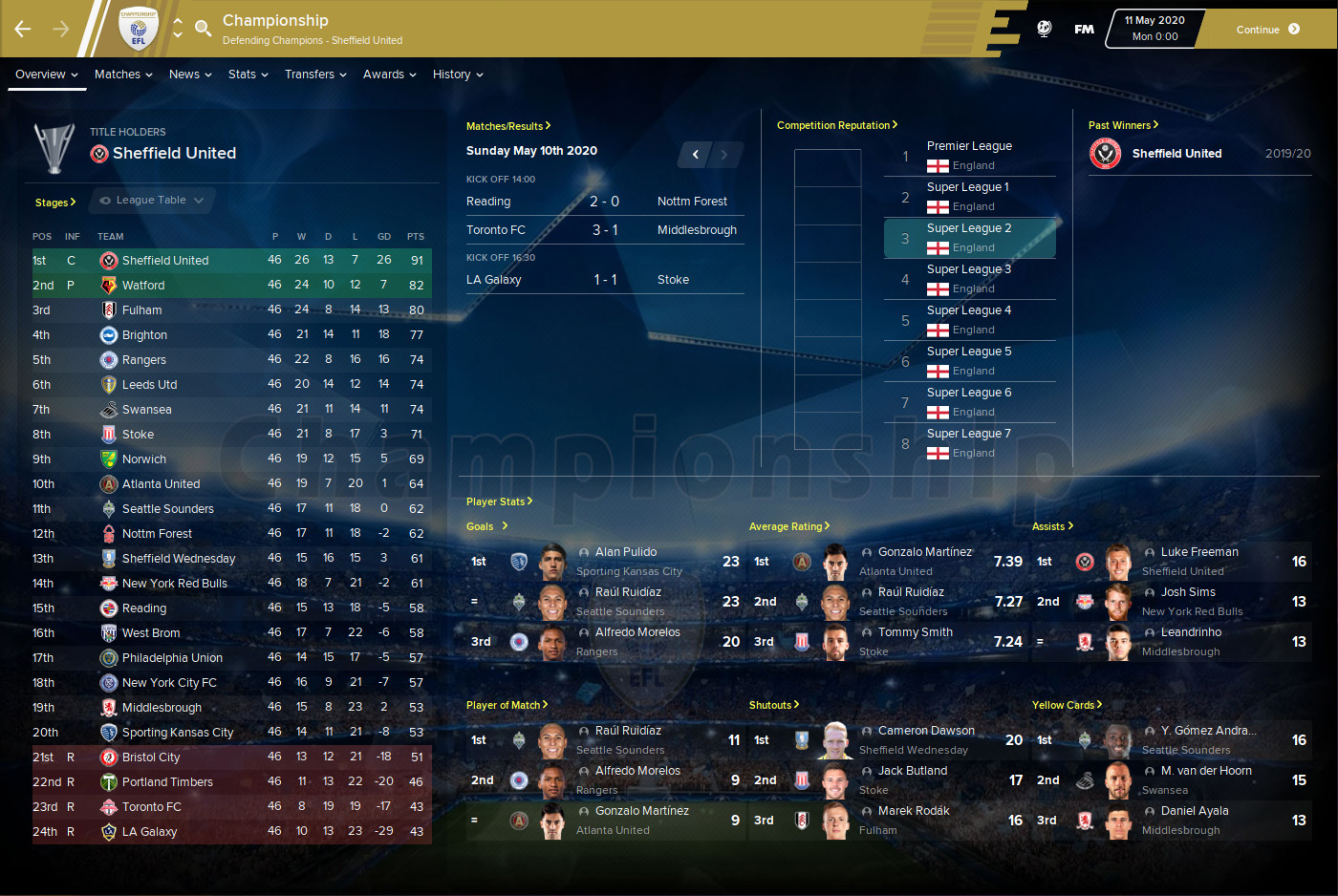 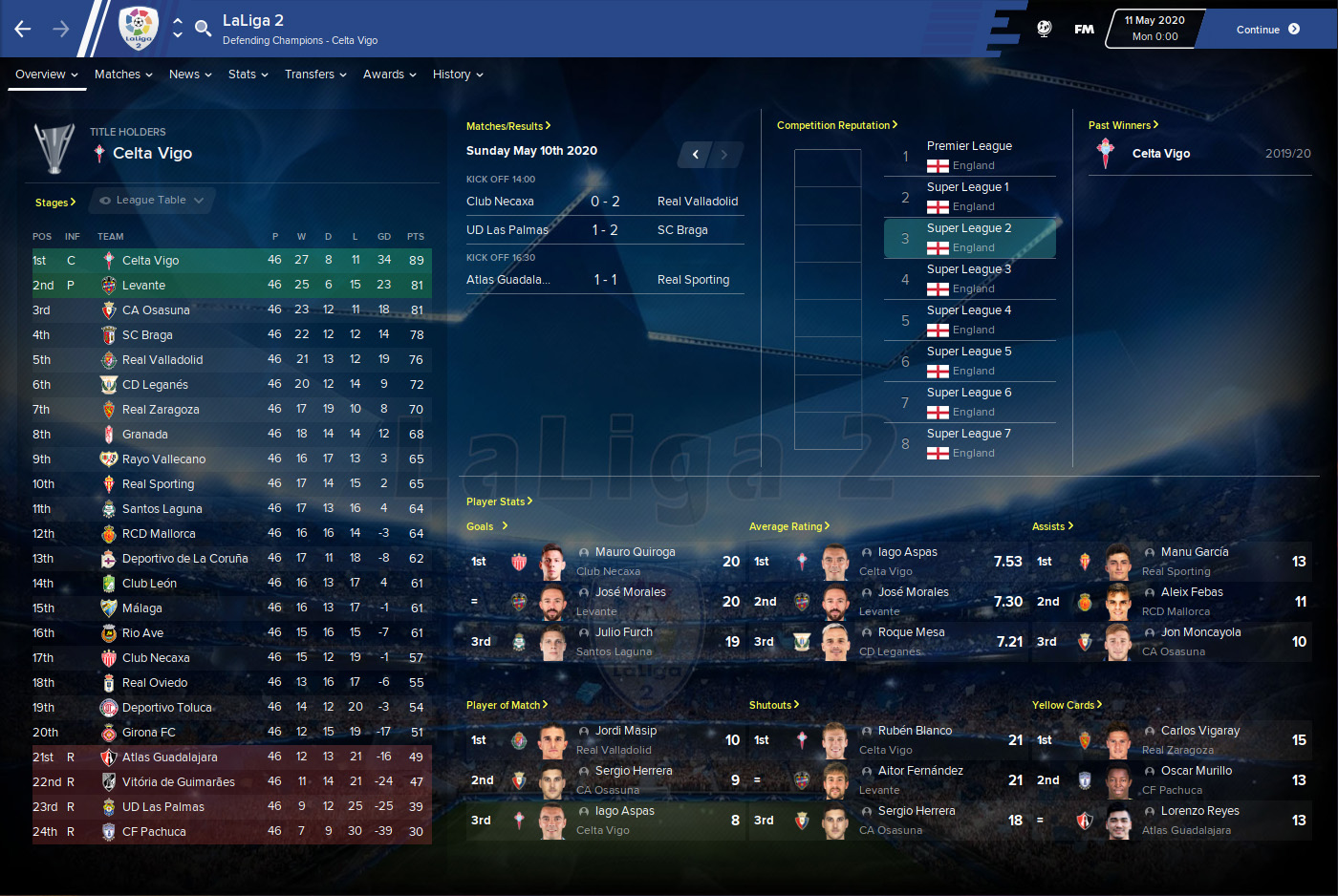 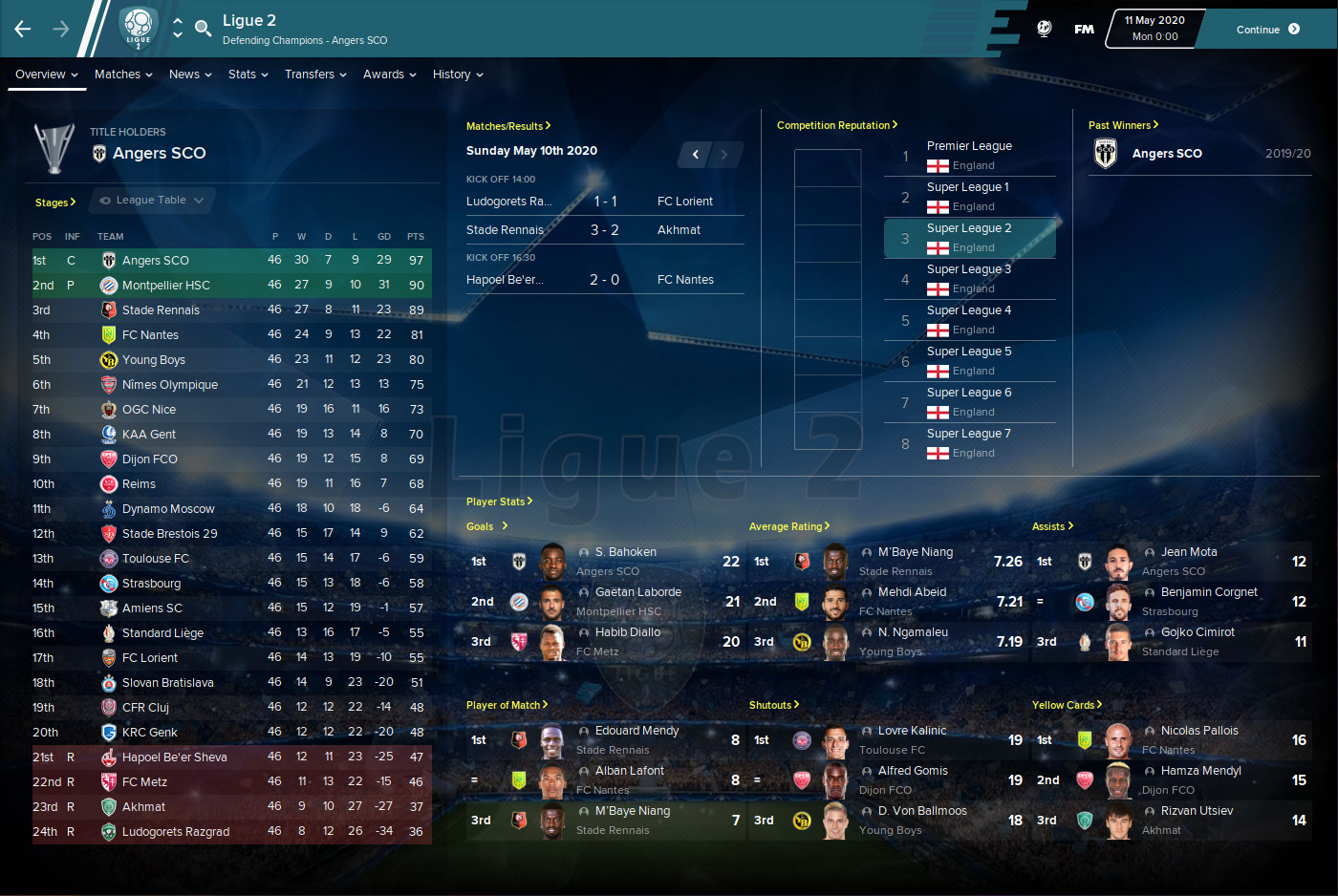 Competition logos are based on Footbe Logos 2019-20 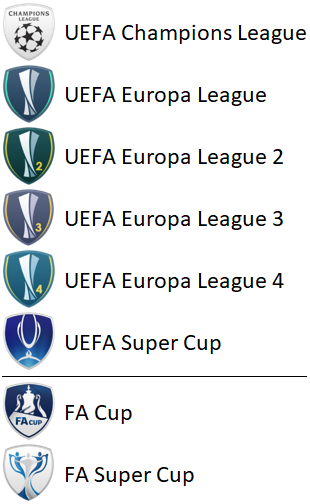 How challenging is this mod? 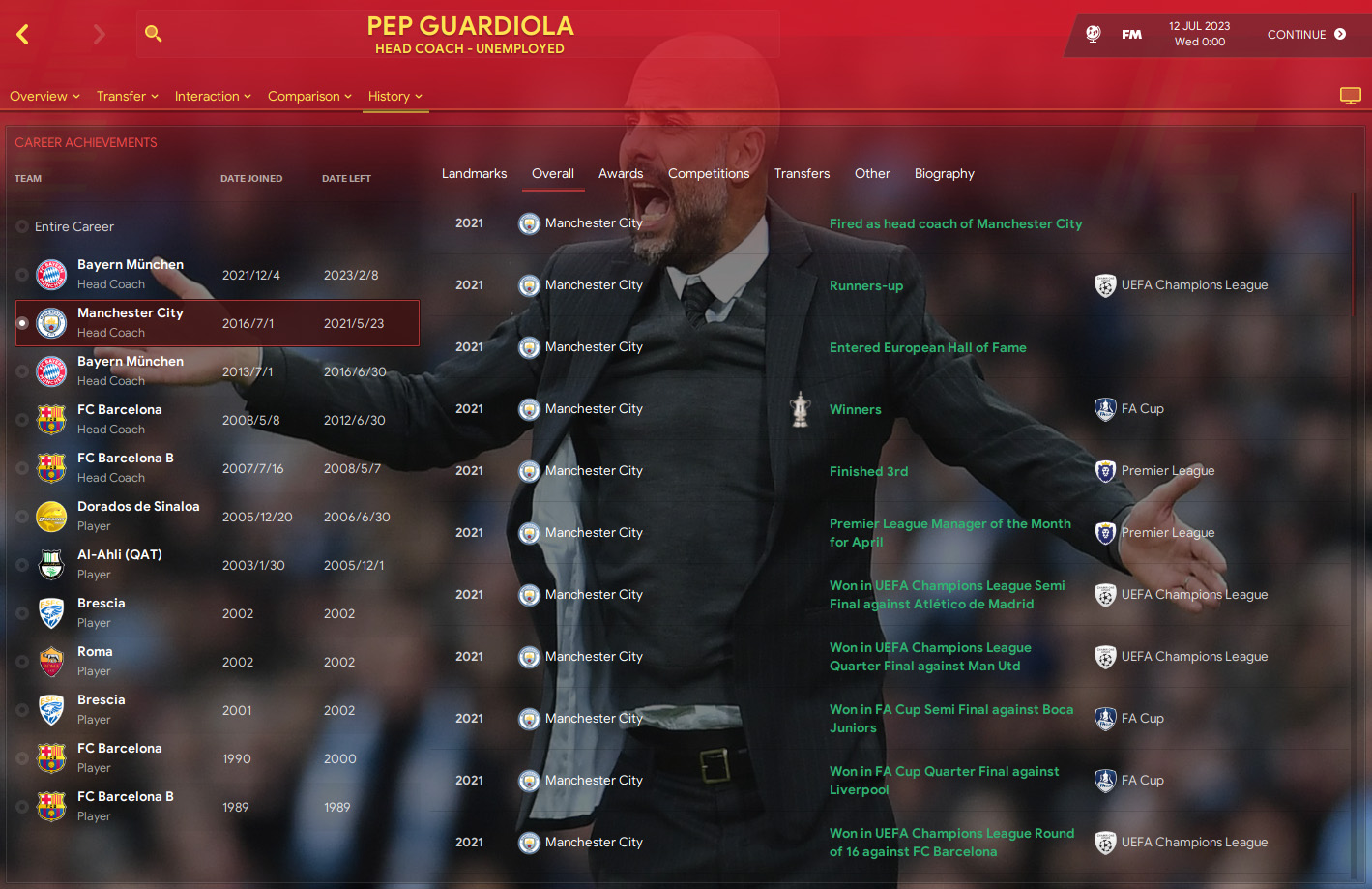 Pep Guardiola won the FA Cup, finished 3rd in the Premier League, runner-up in the UEFA Champions League, entered the European Hall of Fame, gets Manager of the Month and still gets fired.

This mod can be absolutely brutal! But it's also extremely rewarding, all the pain and suffering will be worth the victory and the glory!


Why do I create the WSL


I create this mod for myself every year, because I don't play the base game, it's just not challenging (or balanced) enough for me.
So I create something that I will play for 1000+ hours every year, and I share it here for others to enjoy.
For me to invest 1000+ hours of my precious free time, I require something exceptional to keep me entertained.
Therefore, this db/mod is made with the highest level of passion, love and care; and I hope others will agree and enjoy playing it as much as I do!


Please note that there is a long intial load time to setup the leagues.
But after setup, it will be faster to process.


The Steam Workshop allows you to 'subscribe' to the mod, and get regular real-time updates to the main .fmt file.
However, the Steam Workshop doesn't include all the additional graphics; competition logos and background images I've created.
For the best gameplay experience, I suggest you subscribe to the Steam Workshop file to get regular updates to the .fmt file,
but then download the additional .zip file here and extract the graphics into the /graphics/WSL folder !
NOTE: The Direct Download also includes the latest .fmt file for your convenience.


Teams finishing 3rd or 4th in the group stages of all UEFA competitions will drop down to a lower competitions knockout rounds.
For example, 3rd and 4th place in UEFA Champions League joins the UEFA Europa League knockout rounds.
(Why both 3rd and 4th? Because it's easier to drop 32 teams to the lower competition to create a `Round of 64` playoff)
This change also applies to teams finishing 3rd in the Europa League group stage, and 3rd and 4th in the Europa League 2 and 3.
This gives more teams from the group stages a chance to progress in a lower competition and play more matches.
This was actually something already in last years version, I thought I would leave it out this year, but it's back by request. (Thanks `leverkuhn`)
So there are now 108 teams that compete for the Champions League and 220 teams that compete for the UEFA Europa League.

You'll need to start a new game with the new .fmt file to use the changes! I've kept the name as v1.0 so you can overwrite this file dated 3 April 2020.
If you've subscribed to the WSL file on Steam, then you'll need to completely restart FM for it to download the new version.
Steam users must also start a new game to use the changes!
If you have already started a game from a previous version and you are happy with it, there are no critical fixes here, so this is an optional update!


Also thank you to everyone that have donated so far, it really helps keep me motivated to create this.
I put a lot of time and passion into this mod, so it's nice to know that it's appreciated!
If you can't donate anything, then just leave a shout-out in the comments section below, thanks!


Minor improvement to the FA Cup scheduling for lower tier teams, which sometimes affects scheduling for higher level teams.
Usually only affects 1 match per season, but it can affect a club that is playing a lot of matches.
Made a few other very minor tweeks. This update is also optional for anyone already playing a game!

Players that are playing in the Premier League and Super League 1 (Bundesliga, LaLiga, Ligue 1 and Serie A) are not affected.
Players in the Super League 2 are less affected than lower leagues. The lower league clubs are the most affected.
This issue has been there for 4 days, so anyone that started a lower league save between 3 April and 6 April should update if possible, unless you can get to the higher leagues, then this issue will not affect you. This also doesn't affect players that started a save before 3 April.

This was probably not picked up during testing, because the clubs I was looking at were moving to the correct Europa league.
The fix was small and quick to implement; but I completed an additional 10 hours of testing; testing every scenario and running many simulations, checking the leagues top to bottom and there are no outstanding issues.

I put a lot of time, energy, blood, sweat and CPU clock cycles into testing this mod; and there are so many teams, leagues and competitions to check that sometimes subtle issues like this can creep in.
Since I will also play this mod for hundreds or thousands of hours myself, I assure you that I do everything in my power and ability to avoid issues like this!
So I'm really sorry for any inconvenience this might have caused.

Please check this page every few days for any further updates!


How to Install WSL FM20 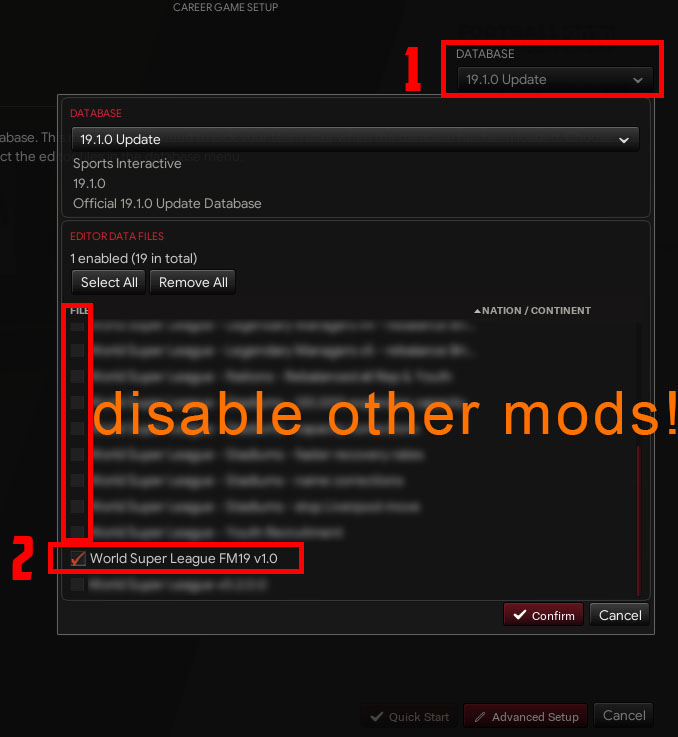 NB NB NB: Please disable all other custom leagues and database changes in the `Database` Drop down box! This mod has been heavily edited and tested, so other custom databases might break it! 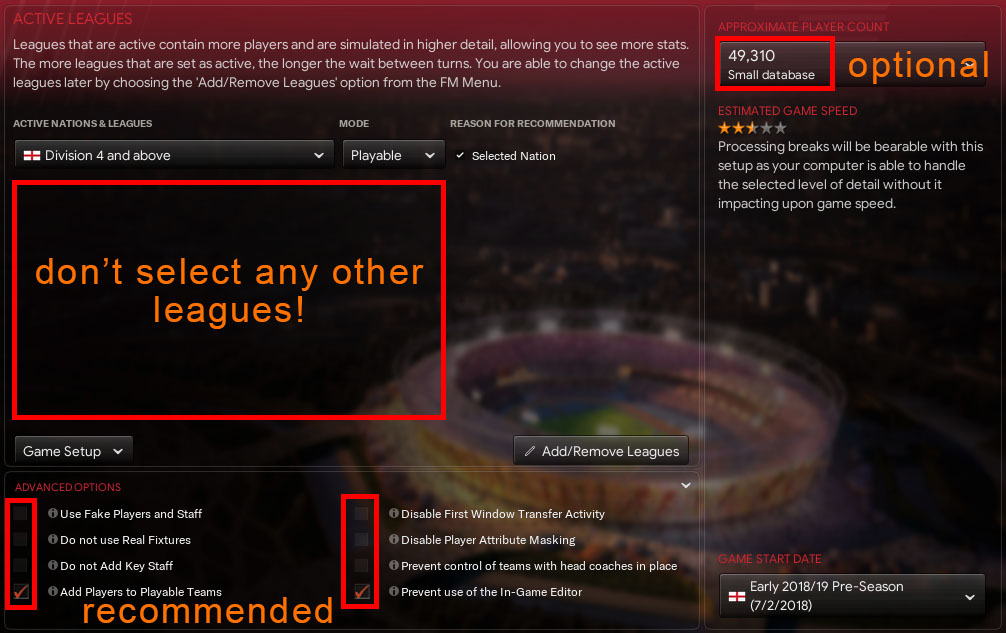 Other nations are NOT necessary, ALL the clubs you need are inside England. 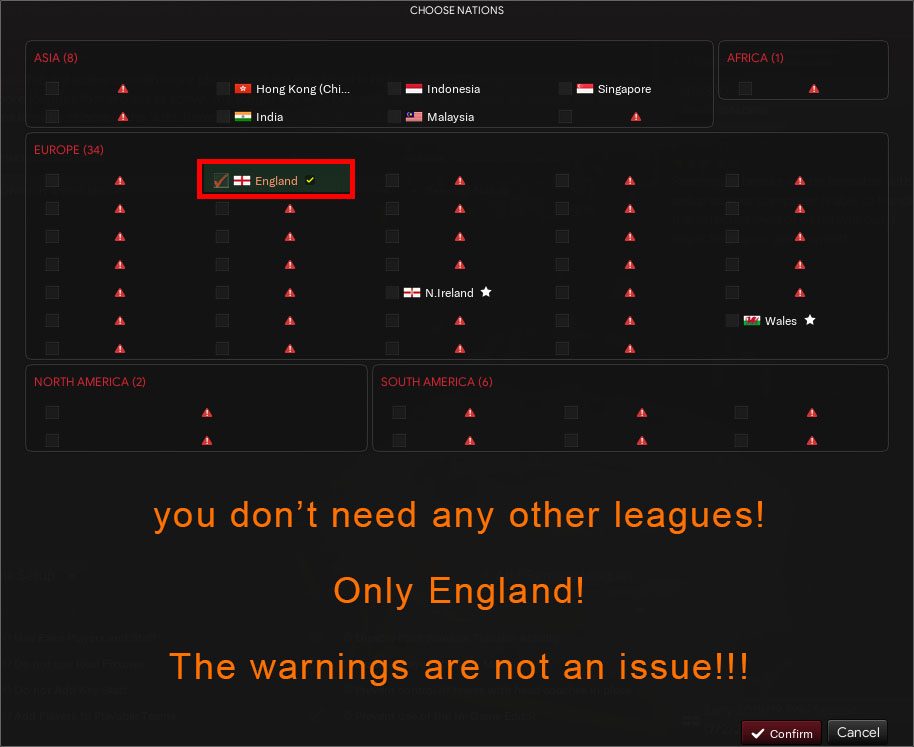 It's normal to see all the other countries are disabled!


If the custom graphics don't show, check the file paths again and then go to `Preferences -> `Reset` (bottom left) -> click `Clear Cache` ... then click `Reload Skin` on the bottom. This can be done anytime during or after starting a new game!


If you love my work, then please consider a small donation.


This mod has taken hundreds of hours of my free time, so I really hope you appreciate the effort and my attention to detail!
Please leave a comment if you enjoyed it! I like seeing feedback, it motivates me to keep doing this!

93 comments have been posted so far.