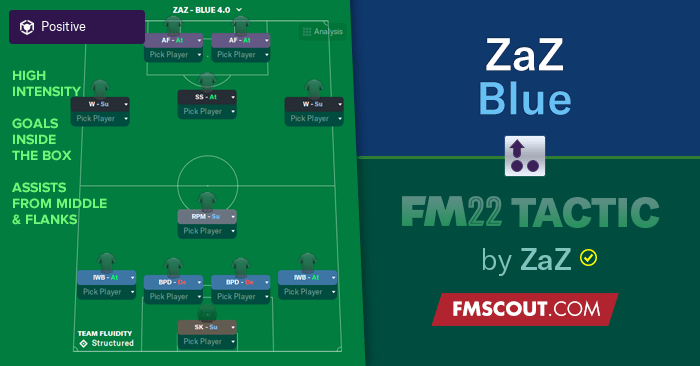 When in possession, inverted wing-backs cut inside to become midfielders while shadow striker becomes a third striker. Roaming playmaker is one of the most important players, covering the entire midfield to offer a short option for passing.


Use Solid Blue 4.0 when you want to hold a score. It concedes around 15% fewer goals than Blue 4.0. It's also a good idea to use Solid in the first half of matches against hard teams, to unsettle them, then change back to Blue during the second half, when their players are getting nervous.

You should use Light Blue 4.0 when you want to rest your players and avoid bookings, thinking about the rest of the season. I recommend using it anytime you think a match is under control, like two or three goals of difference. If your aim is to hold a score, use Solid Blue instead.

After some experimentation with training, I found the training schedule below to be the most efficient for player growth (for the whole year, including pre-season). Set players to rest automatically when condition is not excellent.

Keep in mind that some players might be unhappy with the training schedule, complaining of lack of technical training, excess of quickness or something like that. Just ignore them! 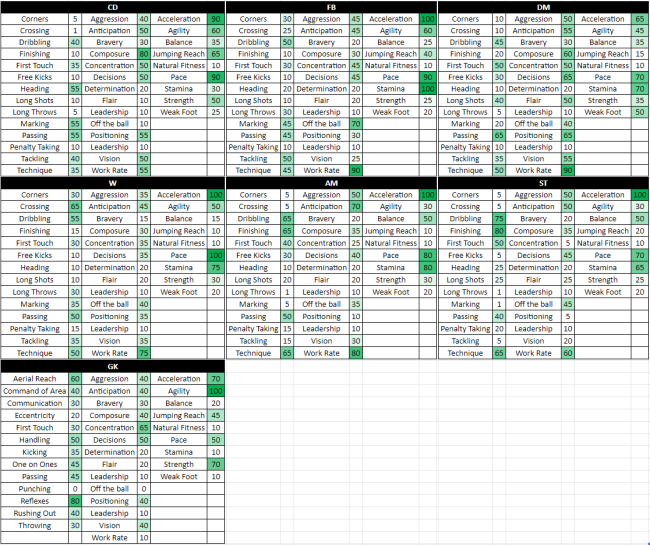 * Thanks Mark (translation) and thegr8 (formatting).

Ignore role ability, or the stars showing how good a player is in his role. It's just cosmetic, showing the opinion of your assistant manager based on current ability and the role attributes. It's always gonna be low for IWB using the same foot as side, or DW with low defending attributes, despite making no difference in performance. In the end, what really matters is position rating, which should be at least accomplished (dark green).

Remember, the important attributes are not the ones highlighted in a player's role, but those that actually affect performance.

Use player traits that promote player instructions. For example, if a role has "Move Into Channels", consider getting the trait with the same name. Avoid getting contradicting traits, like "Stays Back At All Times" or "Comes Deep To Get Ball" for players with the instruction "Get Further Forward". Traits without corresponding instructions, like "Plays One-Twos", are optional and should use common sense based on player attributes.

Empty. Change if you know what you are doing, but don't listen to your assistant manager.

To be successful in football manager, you need to manage your team's playing time, which affects happiness, match sharpness, fatigue (can only see with sports scientist) and condition. Manage happiness and sharpness by making sure each player is getting enough minutes, and fatigue and condition by avoiding giving more minutes per week than they should play. Note that you can use friendlies and reserve matches to keep players sharp, but those matches have no effect on happiness.

My suggestion to manage the squad properly is to add two columns to selection info: "fitness and injuries > fatigue" and "stats (general) > general > games missed in a row". You can do that by right clicking any column name in squad screen, e.g., name, position, and selecting insert column. Make sure you don't use players with high fatigue and don't let any player reach too many games missed in a row (between 3 to 5 depending on your squad size). To keep players fresh during the season and avoid injuries, I also recommend setting automatic training intensity to rest all players below excellent condition.

Morale is another characteristic that needs management. The easiest way to increase morale is by winning, but you can also praise last (official) match, recent form (last 5 games) and training level, as well as criticize the same things. For last match and training level, threshold rating for increasing morale is 8.05+ for praising and 6.3- for warning. For recent form, you can safely praise anyone with rating 7.5+.

Finally, you also need to manage complacency and anxiety. Do that through team talks and shouts. The effect is based on players' hidden status and match odds, but some talks and shouts are usually more positive than others. For example, praising a winning team with shouts usually gives a positive response, as well as encouraging your team when not winning (losing or tie).

For team talk, I usually prefer to relieve pressure by telling them to play their natural game, then tell them individually that I have faith in them. At half time, I praise them if winning by at least two goals, otherwise I tell them I'm not happy. After match, I praise them for victories, tell them I'm unhappy when we don't win and sometimes warn against complacency after big wins. Keep in mind that you should be a little lighter with your team when playing against stronger opponents.

If one of your players gets a yellow card during a match, it might be a good idea to change his player's instruction to Ease Off Tackles to avoid being sent off. To do so, click on the player card by the bottom of match view, then click player instructions. You can also do the same for exhausted players if you run out of subs, as well as reducing his individual pressing trigger, to avoid injuries.

It's very common for some people to have a series of poor results during a season and think the tactic stopped working. Below are ten reasons your team might stop winning for a while.

1. Complacency: When a team wins too much, players take victories for granted, not giving their best. To avoid that, you must motivate them with team talk, shouts and media handling.

2. Pressure: When playing against stronger teams, your players might feel pressured and perform worse. To avoid that, you need to relieve pressure on team talk, shouts and media handling.

3. Fatigue: When a player has high match and training loads, he builds fatigue. It's not the same of condition or match fitness and you need a sports scientist to see it in the medical centre. To avoid that, you need to rest from training and rotate your squad.

4. Morale: When you lose matches or certain events happen (like player getting unhappy), players lose morale. It is one thing that affects performance a lot, so it can create a bad spiral if not managed properly. To avoid that, praise and warn players based on last match score, form (last 5 matches) and training. You can also increase morale with team talk after matches, team meetings and other forms of interaction.

5. Poor form of players: Sometimes, strikers can get into a poor form that lasts a long time, like ten matches without scoring or more. I am not sure if there is an internal mechanic for that, but it certainly happens fairly often. If both your strikers get into poor form at once, it can get really hard to win matches. To avoid that, I believe you need to score to avoid the poor form, but it might also be just RNG.

6. Injuries: It is fairly common to have injuries by the mid of season, forcing you to use worse players or play in lower condition. To avoid that, you need good physios, lighter training during season, rest and rotate players.

7. Condition: By the middle of season, you usually have several championships being played at once, forcing you to play 2 or 3 matches a week for several weeks in a row. That can force you to rotate to players of lower quality or use players with lower condition. To avoid that, you need to rest players from training and build a balanced squad to rotate.

8. Match fitness: Injuries and lack of rotation can make your players lack match fitness, decreasing their performance. That can cause your team to suffer when you are forced to rotate because of injuries or tight schedule. To avoid that, either rotate your squad or use those players in reserve friendlies.

10. RNG (or randomness): Sometimes, your luck is just bad during certain matches. There is no way to avoid that, just keep playing and results should normalize eventually.