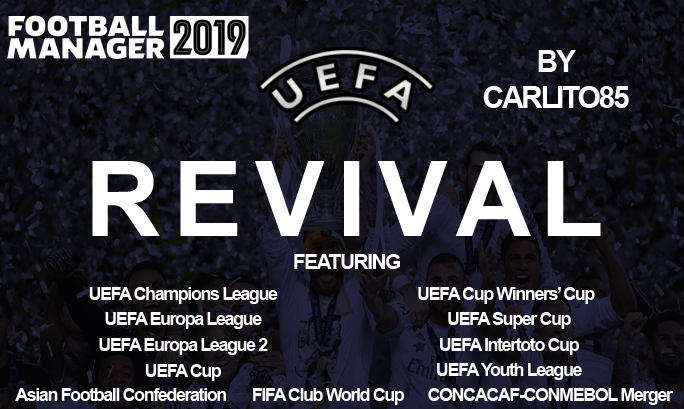 Hi all! Bit later out of the gate this year but I finally gotten this up and running for FM19. As always there are plenty of updates for this year, tons of options, as well as more that I have planned but haven't been able to implement yet.

This is a project dating back to Football Manager 2013. It originally started out solely as a throwback to the 1999-2003 format of the UEFA Champions League, which contained 2 group stages, and has since progressed into a full structure where I've managed to find room to bring back the UEFA Intertoto Cup & the UEFA Cup Winners' Cup. There are 33 separate UEFA structure files so you can choose whether you'd like to use the UEFA Europa League (1 group stage or 2), the recently announced Europa League 2, or revert back to the UEFA Cup. You can also choose whether or not to reinstate the UEFA Cup Winners' Cup, play a knockout-only version of the tournaments, play the 1991-93 version of the Champions League (group stage for the final 8), or choose between 1 or 2 group stages in the UEFA Champions League. Plenty of choice for all.

All new to the project this year are the No Transfer Window files. These will allow you to operate in the transfer market all year round in over 30 countries. Now technically I should clarify that this is in fact a year-long transfer window, which was done in order to keep up with signings over the course of the year, and how much money is spent. This way the Transfer Window tab in the league overview still has some use. The window closes at 11pm at the end of May, and the new one will open the following morning.

Also ﻿new to the project is a CONCACAF ﻿and CONMEBOL merger into a 51-nation structure, featuring 5 competitions for teams to compete.﻿

Finally, there is a version of the FIFA Club World Cup which is loosely based on the newly announced expansion to 24 teams. Like the real competition, this one will start in June of 2021 and will take place every 4 years. However the expansion only features 20 teams as opposed to 24 to avoid certain complications.

- 2 files containing the UEFA Europa League 2 added. File 25 features one group stage for the Champions League, while file 26 features two
- A customized version of the newly planned FIFA Club World Cup added. 2 files are available for compatibility with UEFA Cup/Europa League
- 7 extra files added. Files 27-32 are alternates of existing files, where the winners automatically qualify for the following season
- File 33 is a brand new format, featuring 2 group stages for the Champions League, and a straight knockout format for the UEFA Cup
- Fixed a number of errors in the file guide relating to files 16-18
- 2 versions of the AFC, CONCACAF/CONMEBOL merger and UEFA Youth League now available for compatibility with UEFA Cup/Europa League

- UEFA Youth League added to the project. This competition features 54 nations, and the teams vary from U18's - U23's, depending on what team type each nation uses
- CONCACAF-CONMEBOL merger added to the project. This structure mirrors UEFA Revival file 23 (with a couple of tweaks)
- Updates to all 'No Transfer Window' files. Transfers for the season across Europe will stop for 1 hour at 11pm on May 31st. Transfers will then start up for the new season the following morning﻿﻿﻿﻿﻿﻿

- Fixed a fate error in the UEFA Youth League Playoff round

- Year-round transfers for 34 UEFA nations (all in separate files, but can be used together)
- Competition fixture dates and priorities amended for all files
- VAR & Goal-Line Technology added to all competitions
- Competition winners automatically qualifying for the following season have unfortunately had to be removed due to a bug in the editor. These will be re-added to the project once the bug is fixed
- With the UEFA competition files being numbered this year, I have added a file guide displaying the format for each individual structure. Hopefully this avoids any confusion when starting up a new save 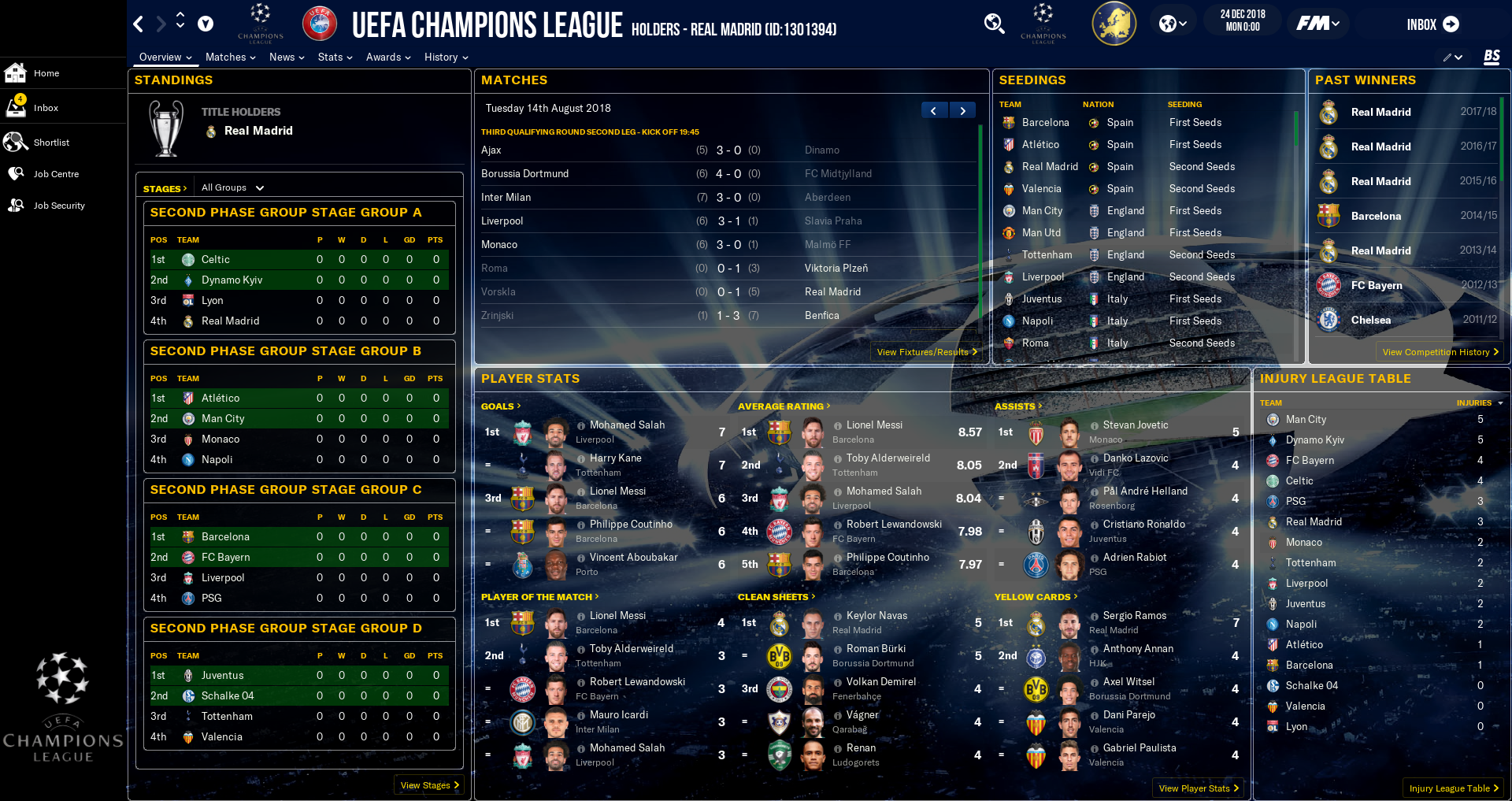 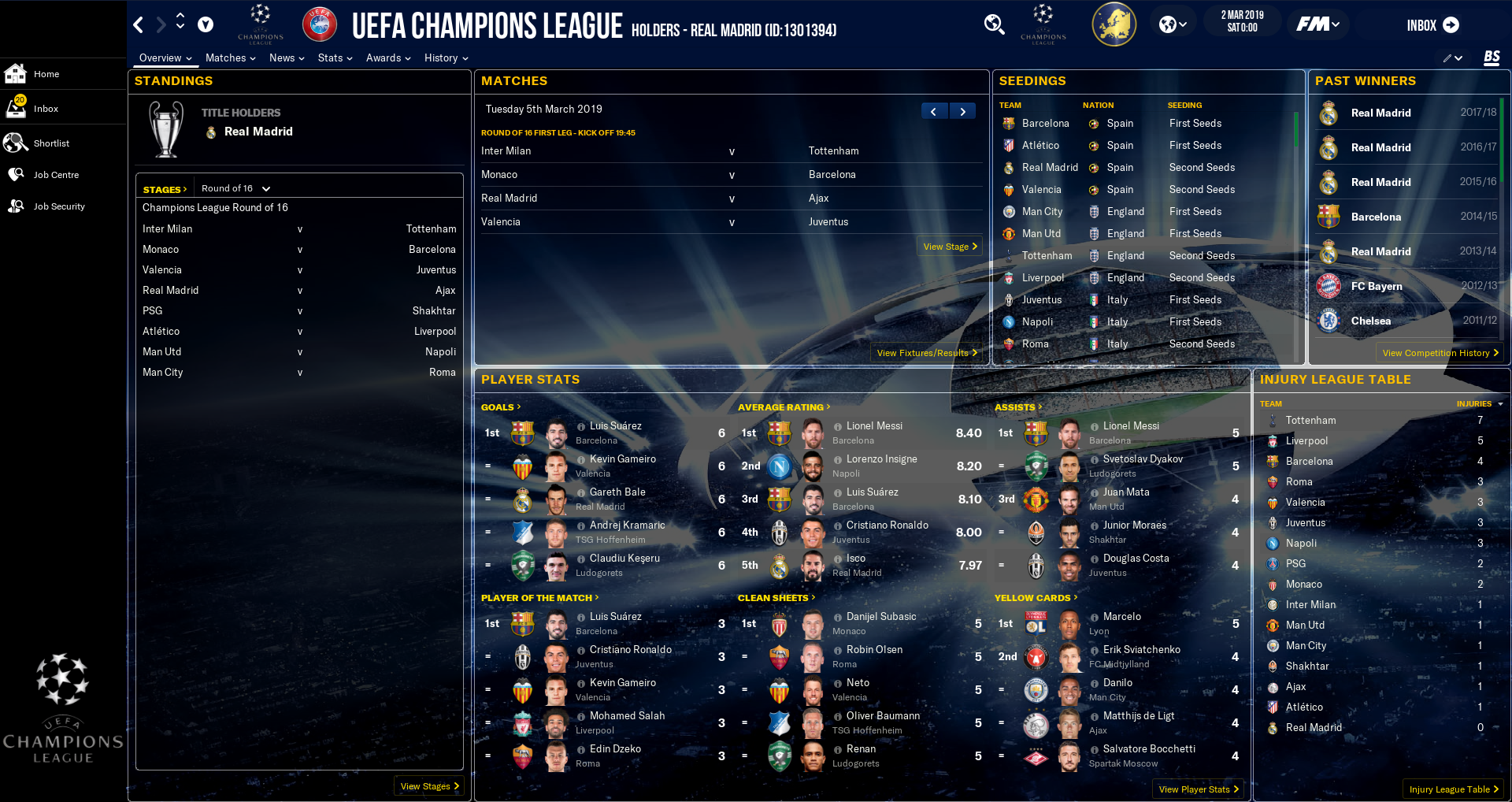 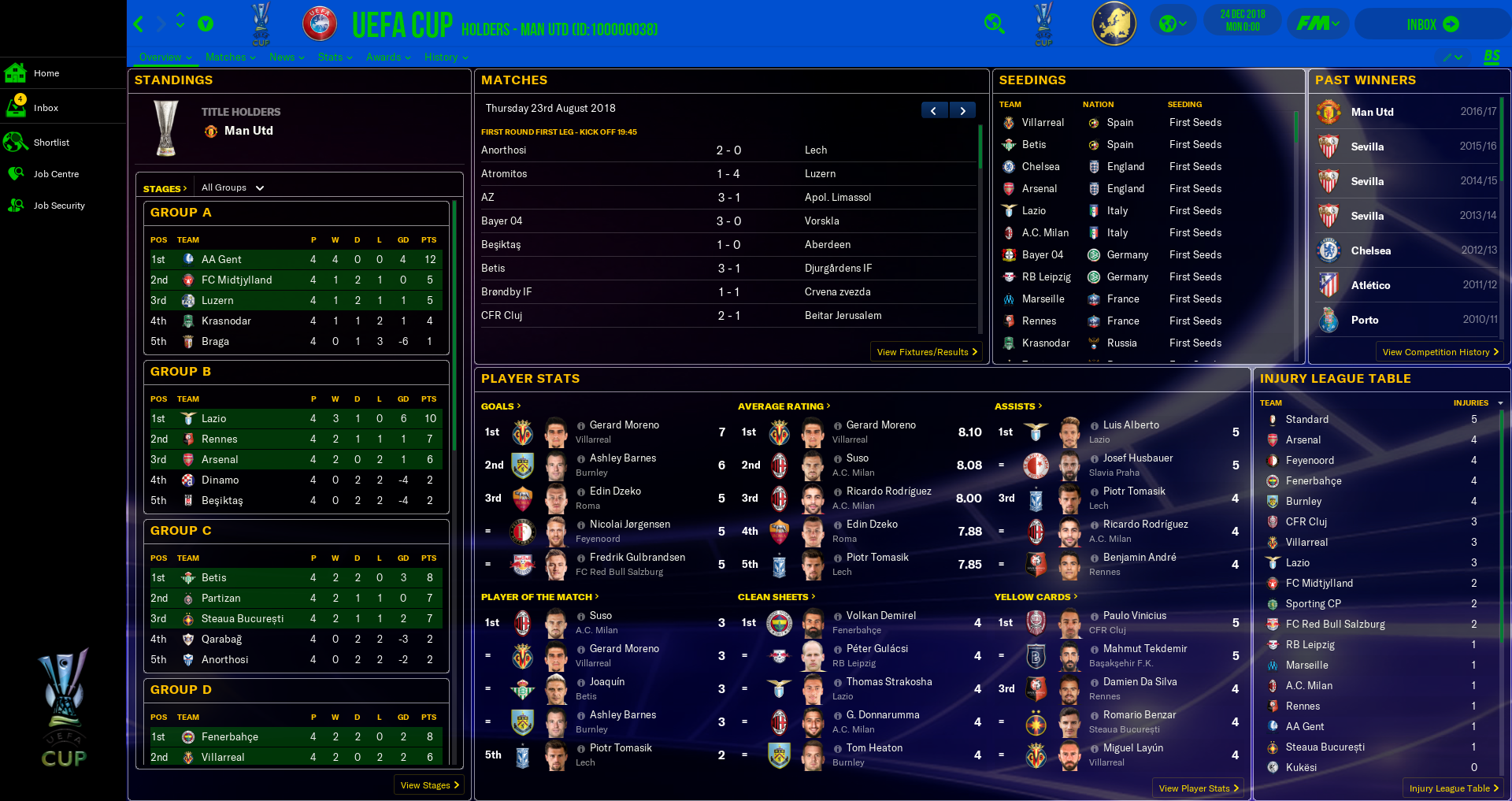 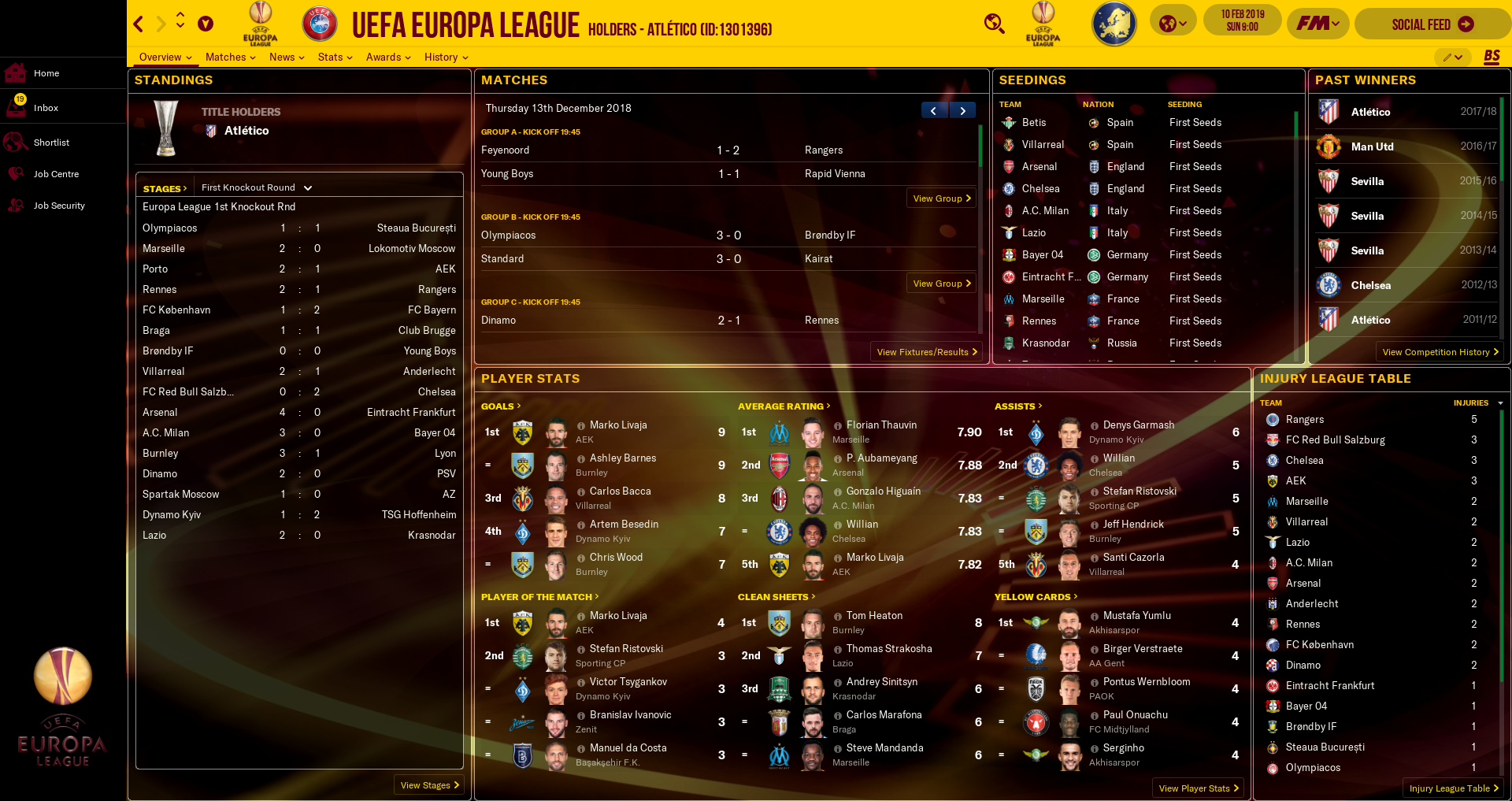 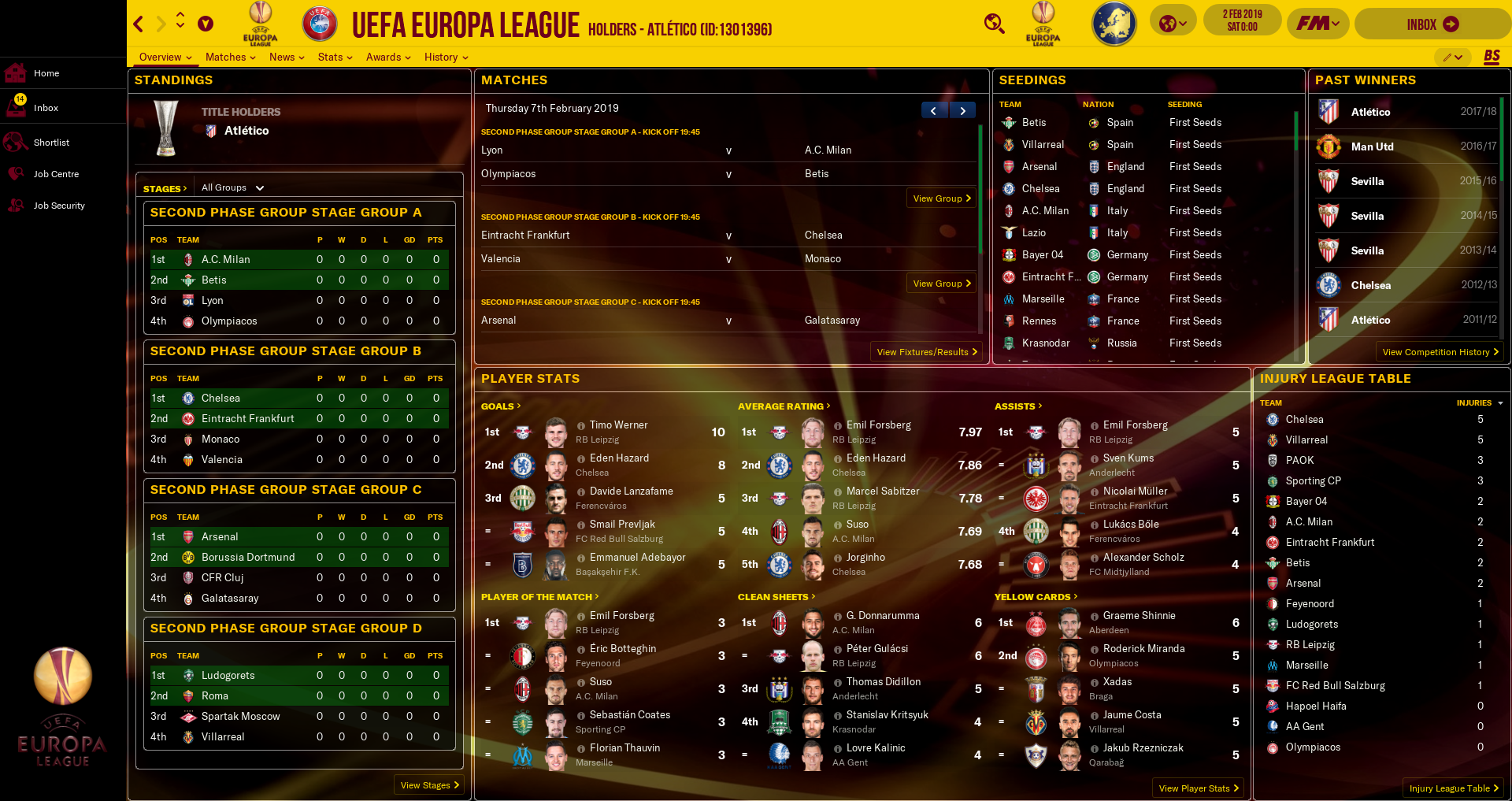 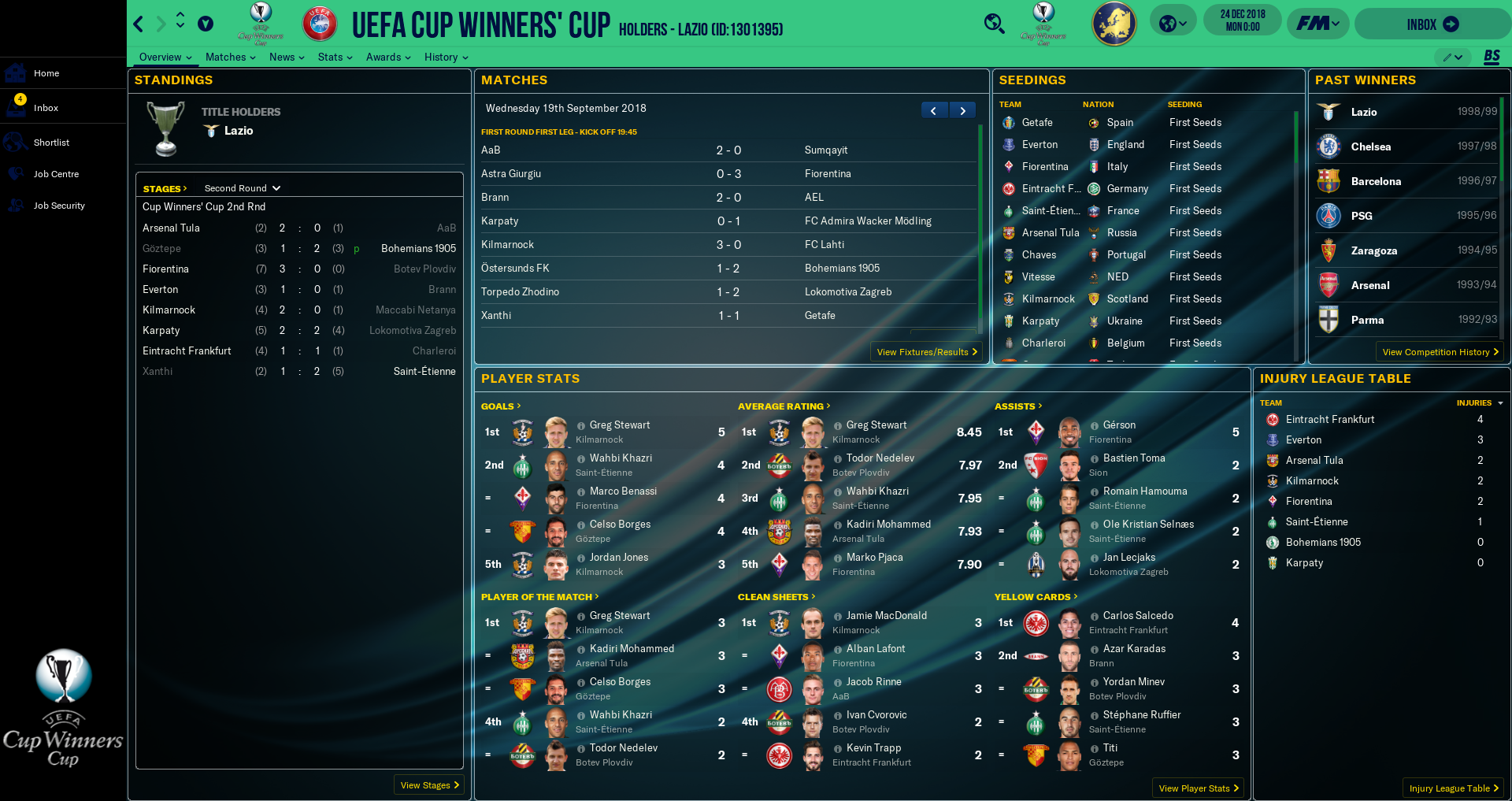 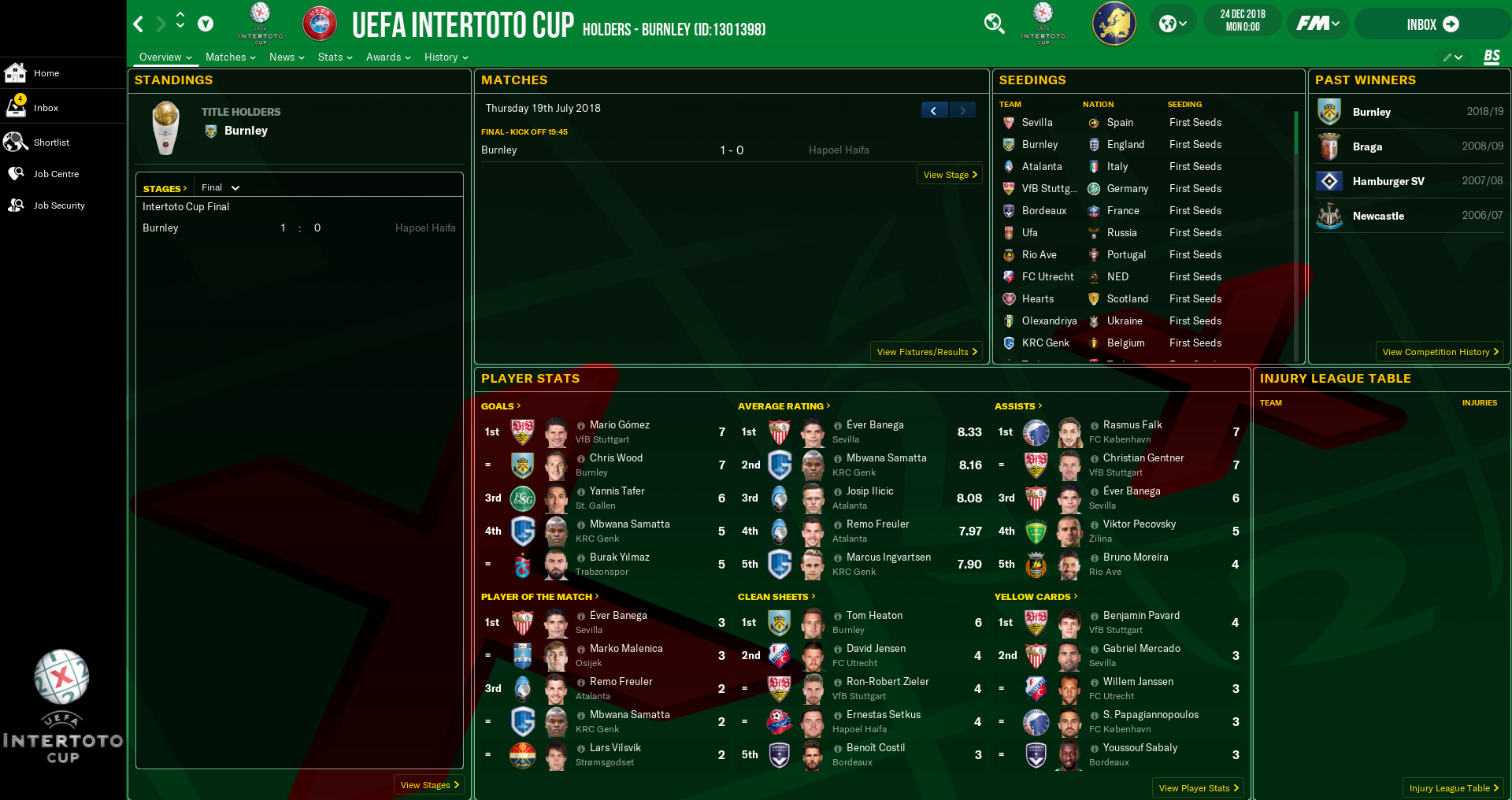 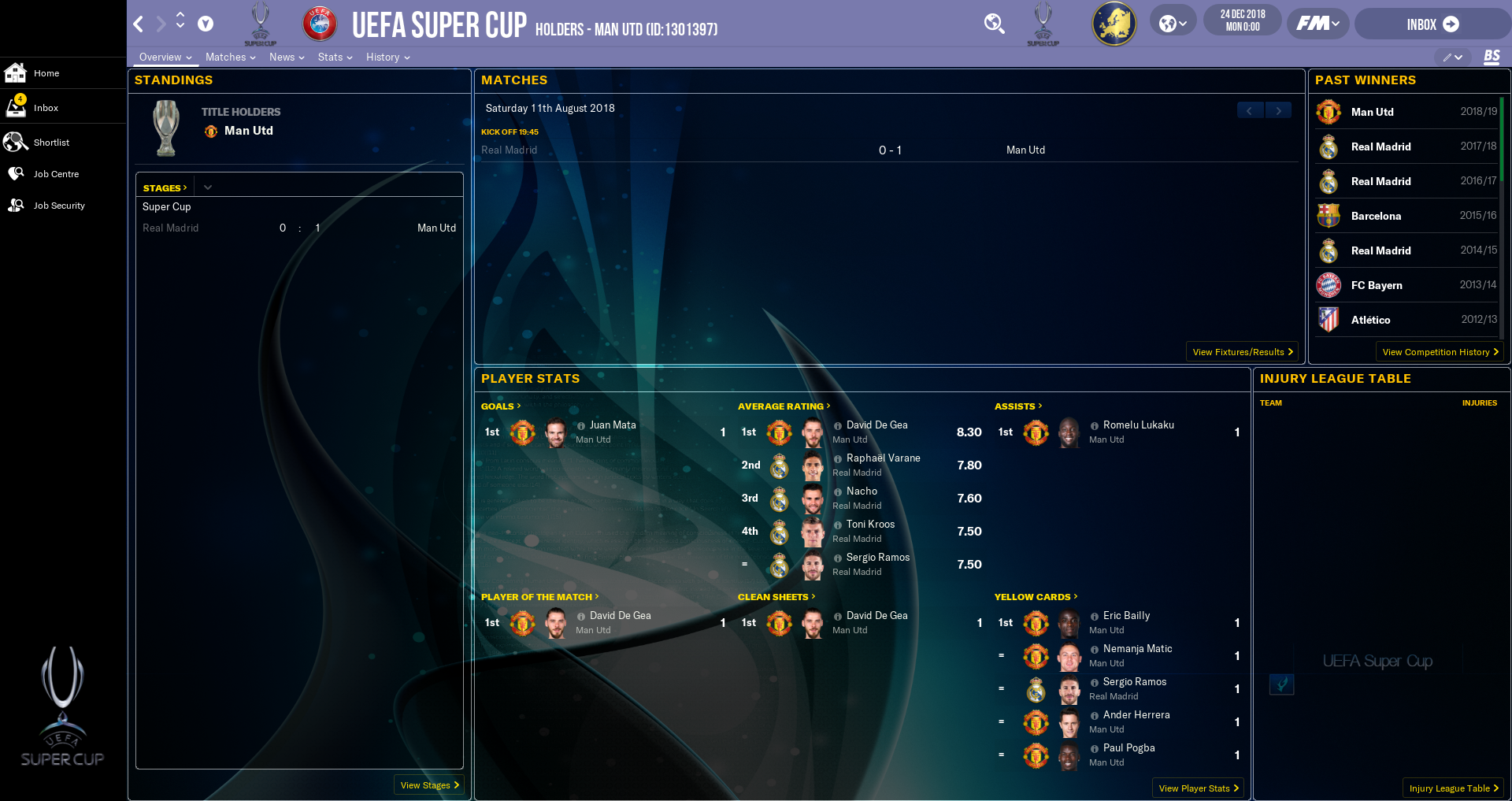 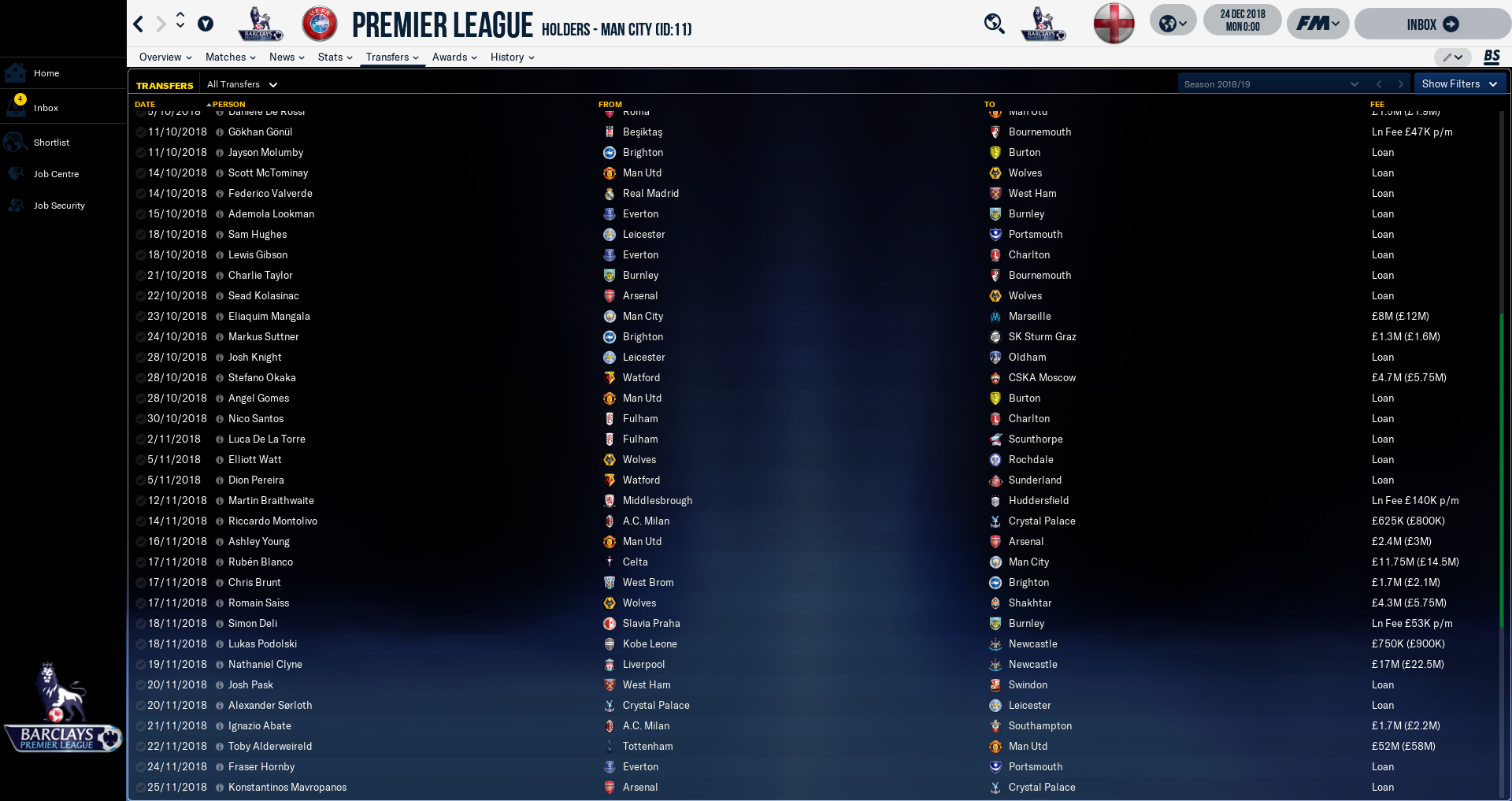 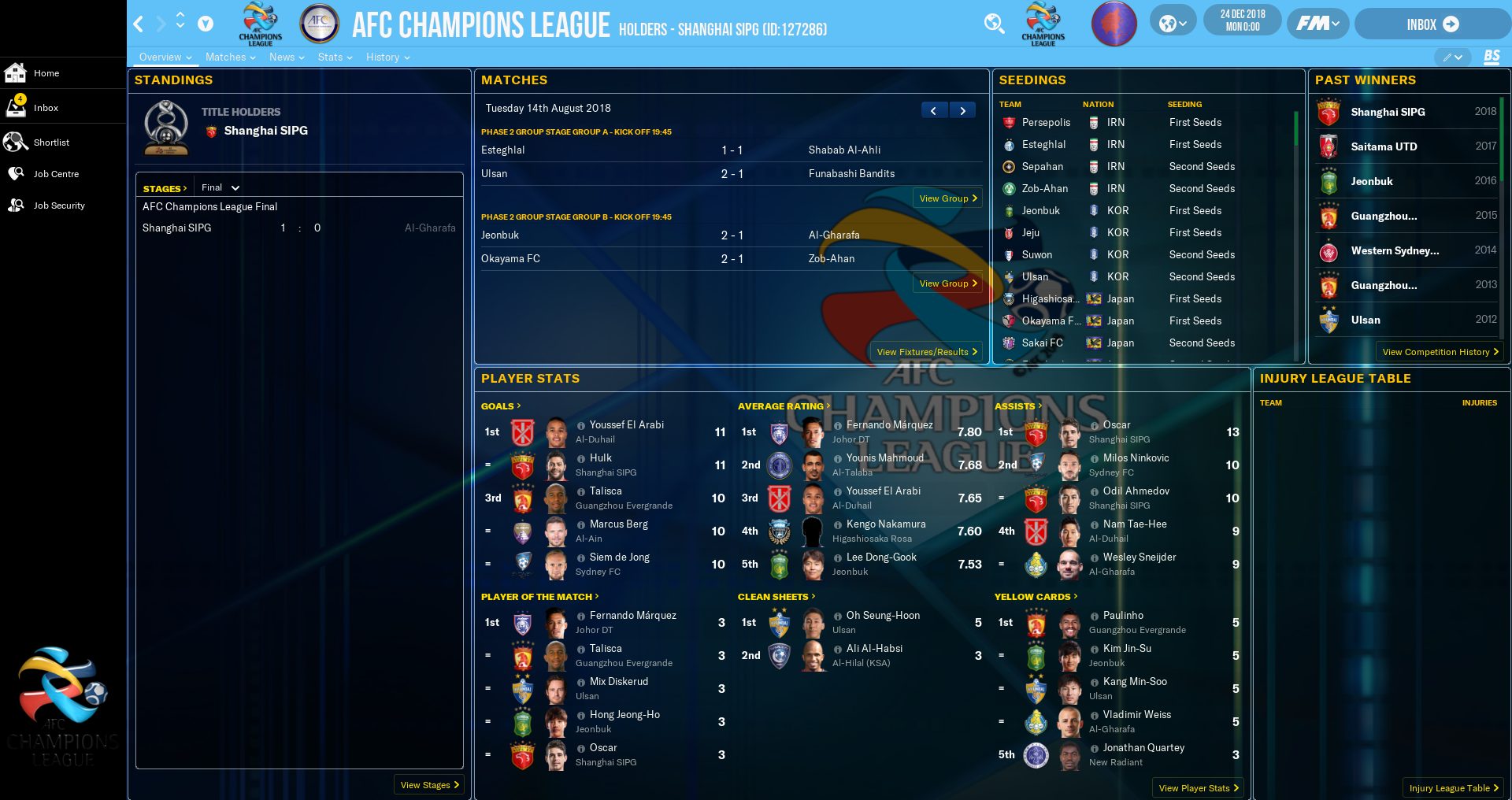 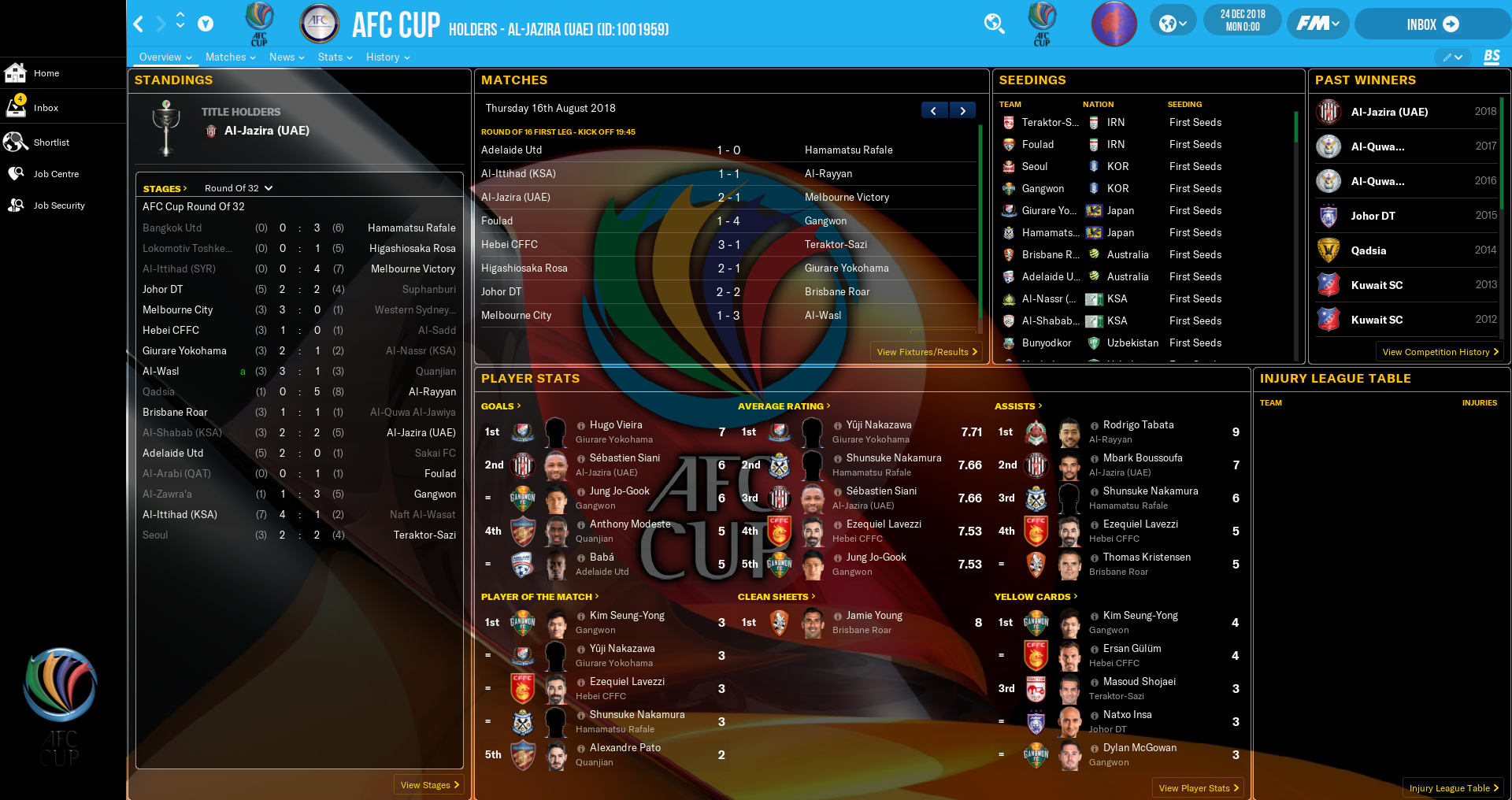 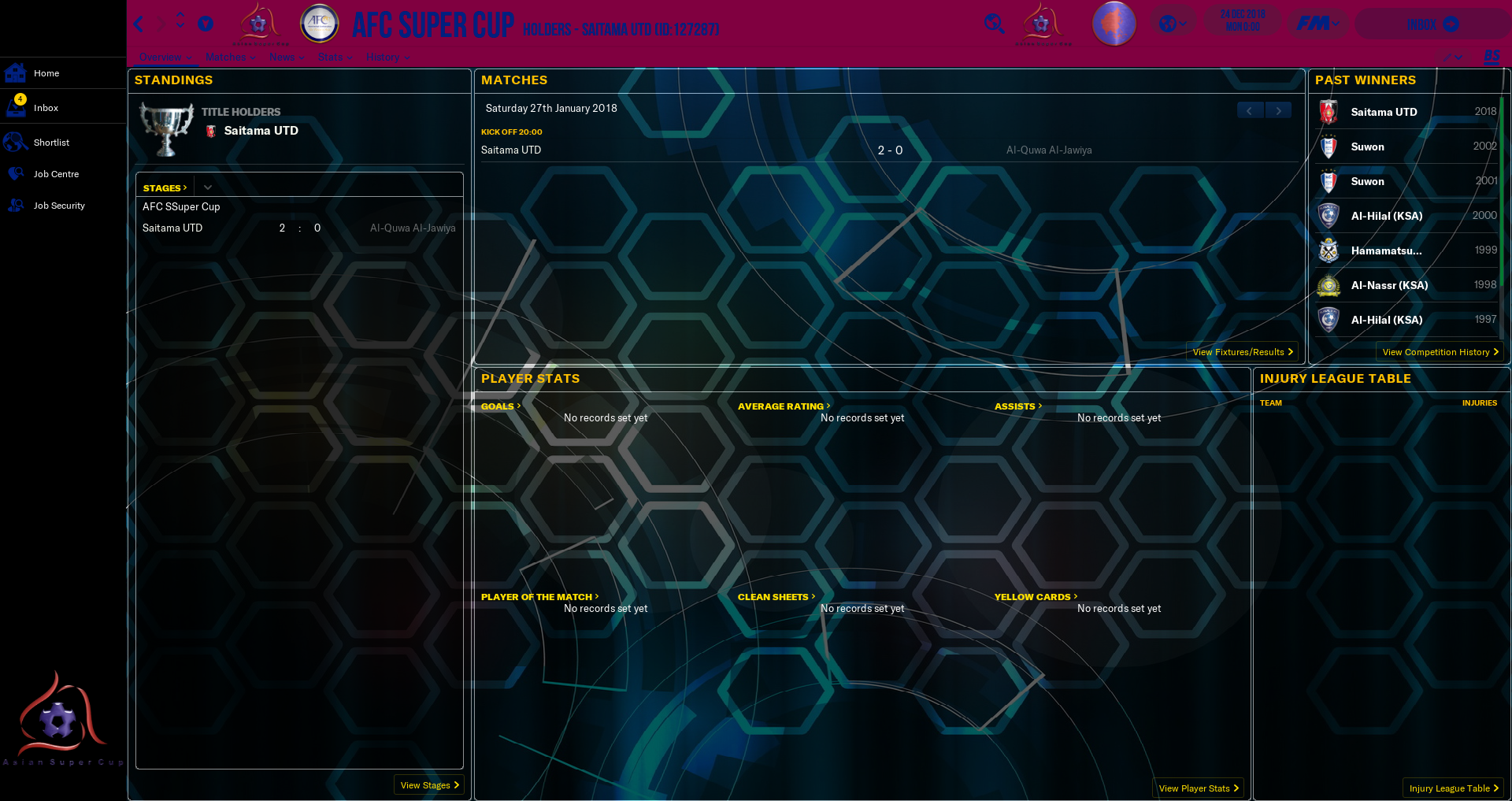 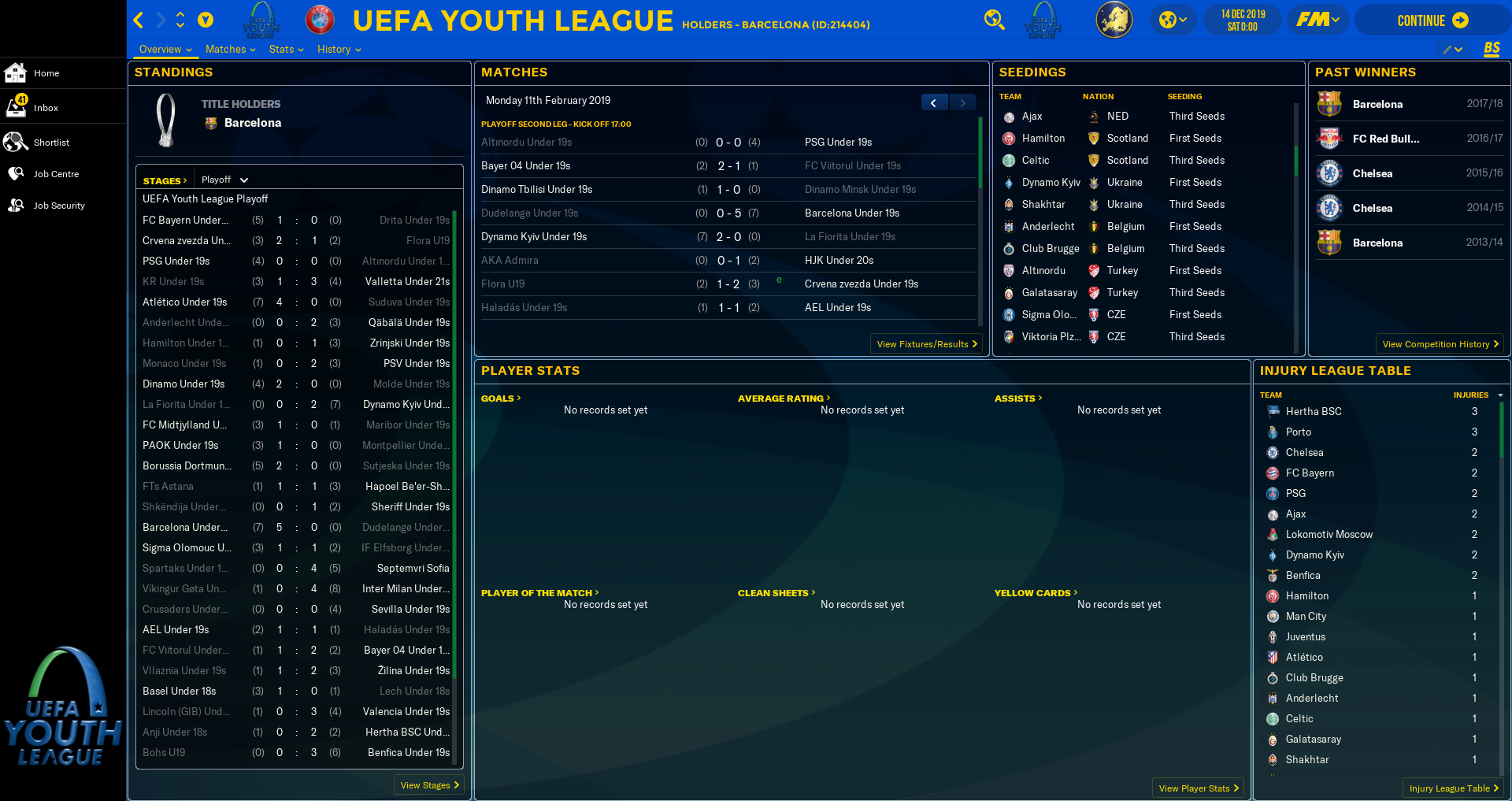 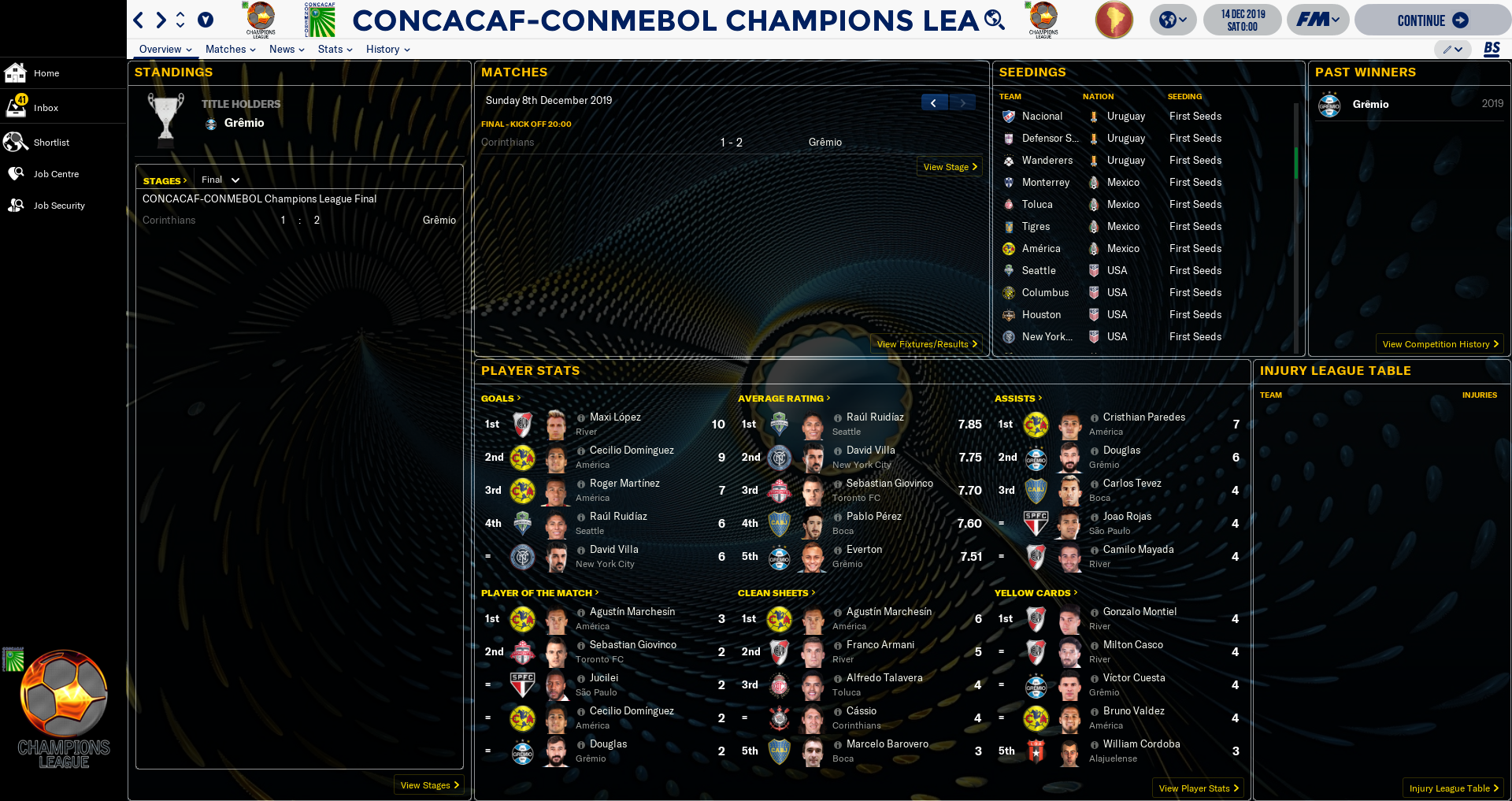 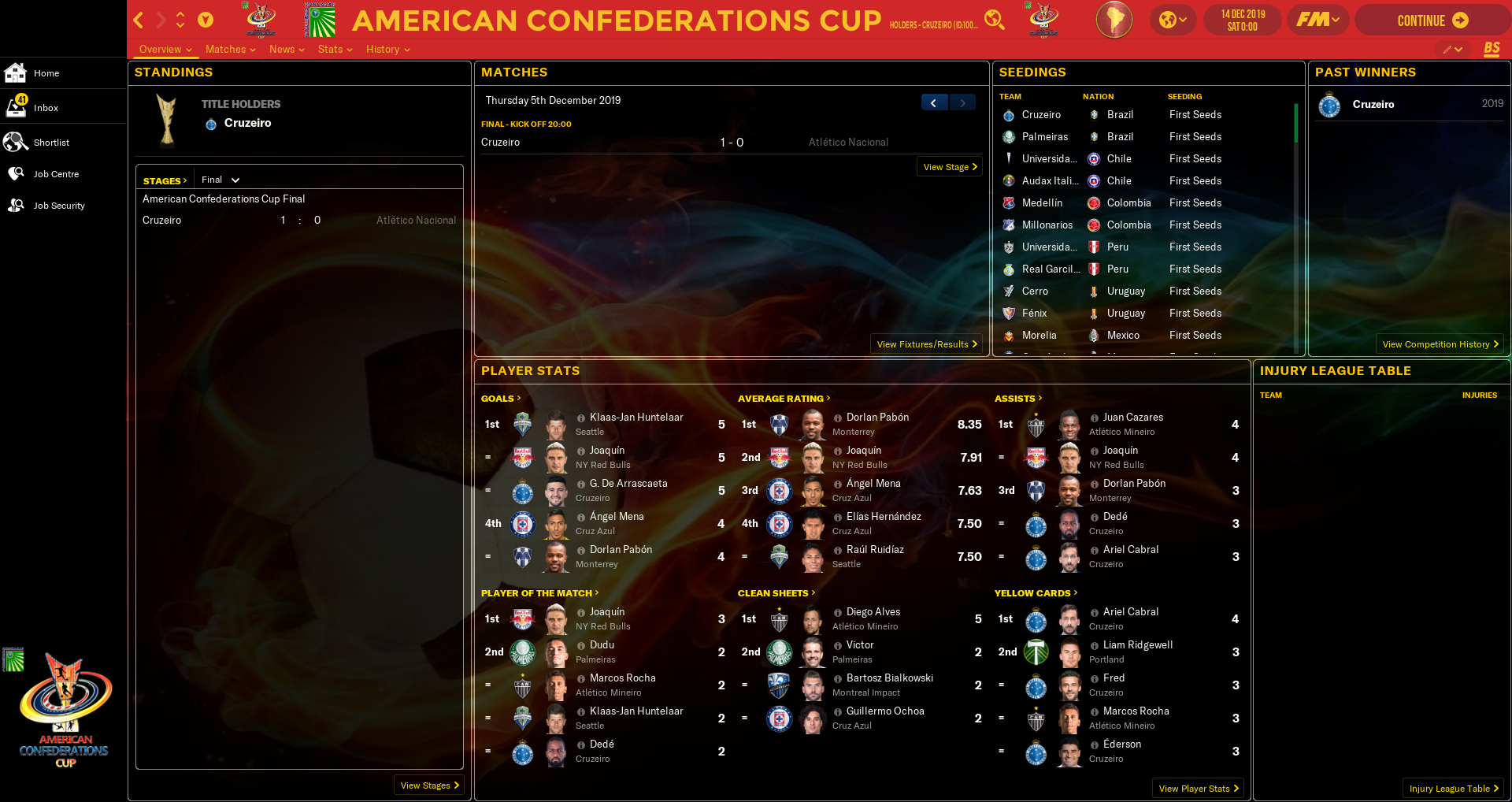 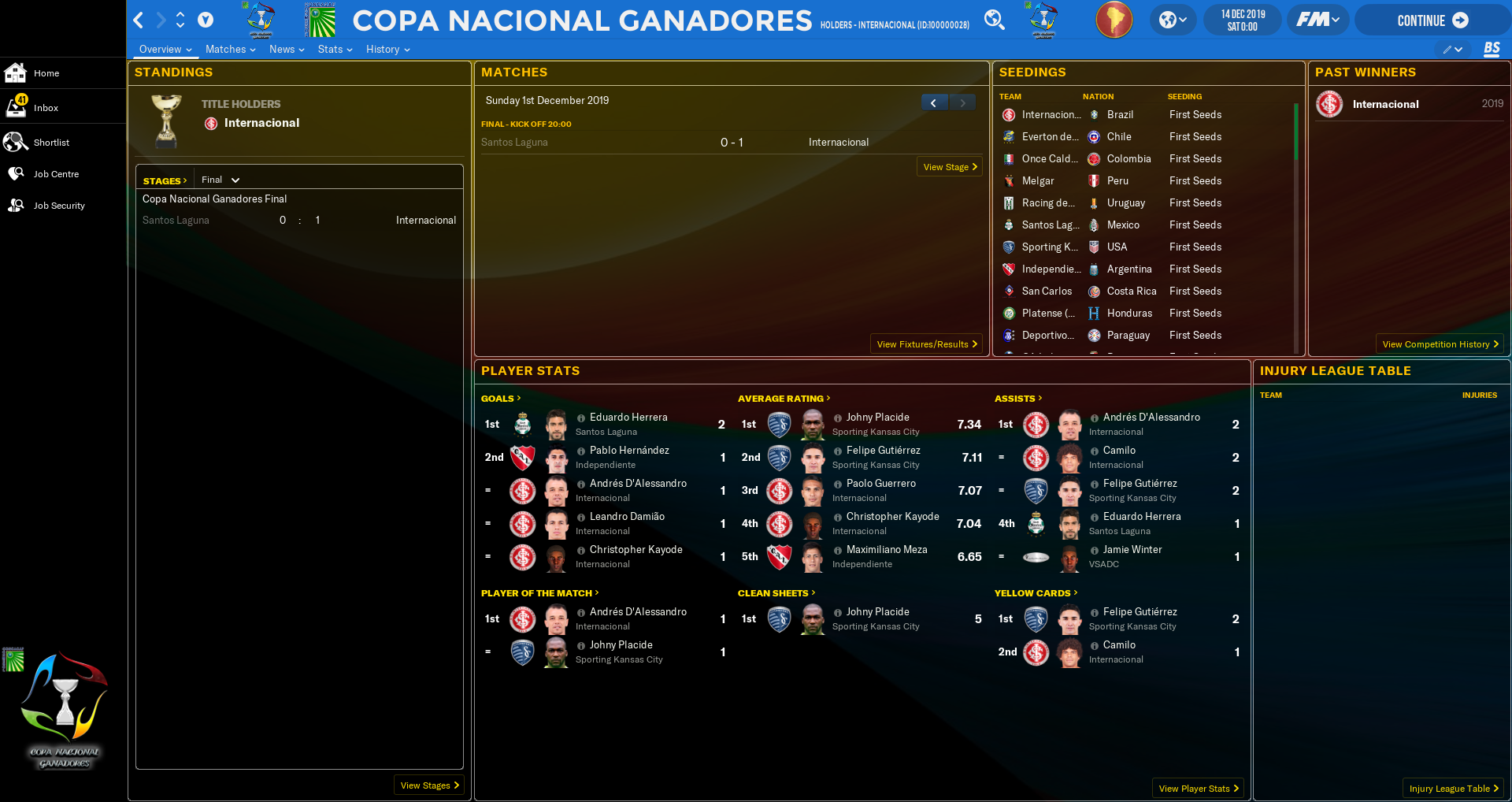 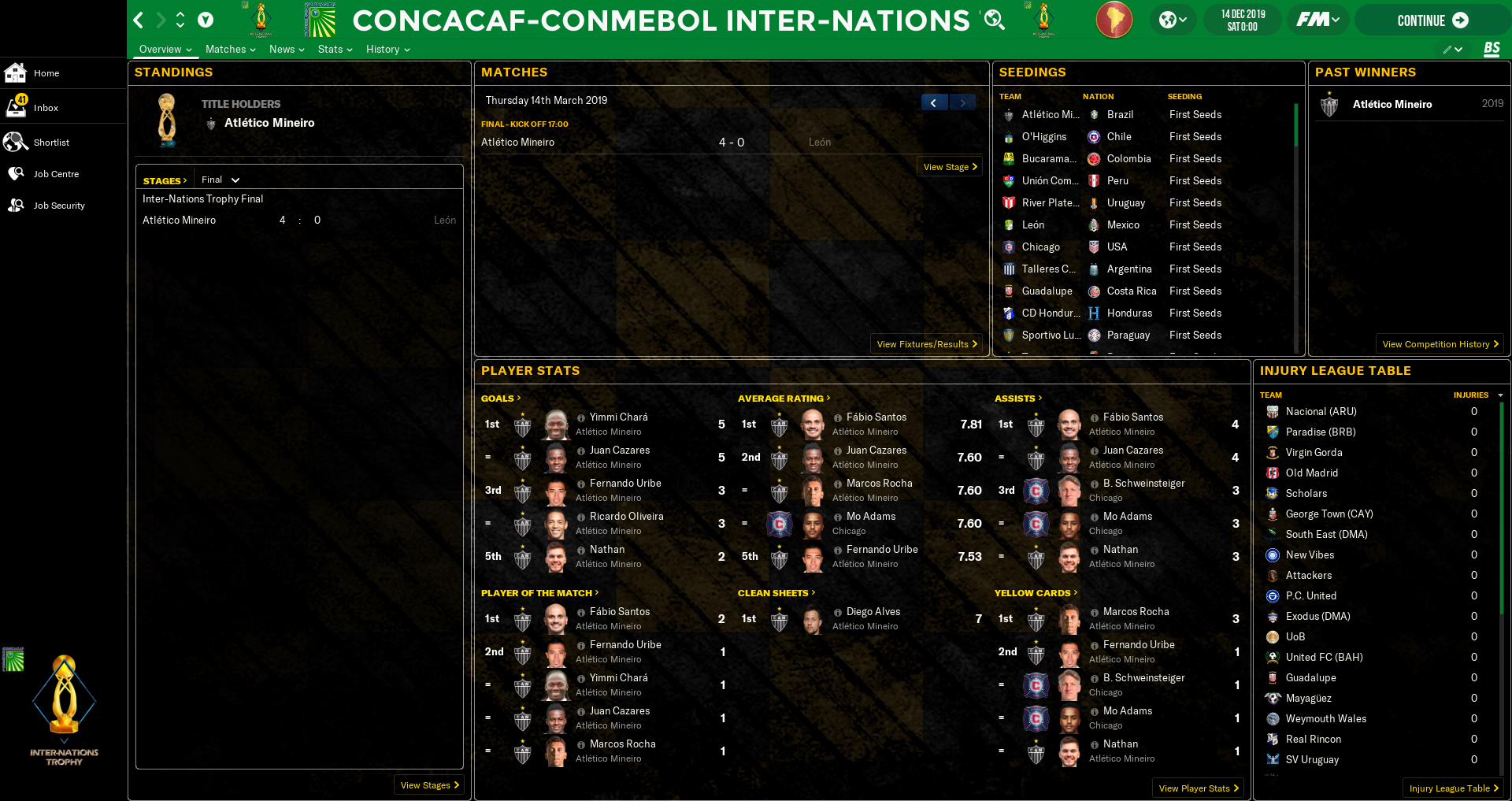 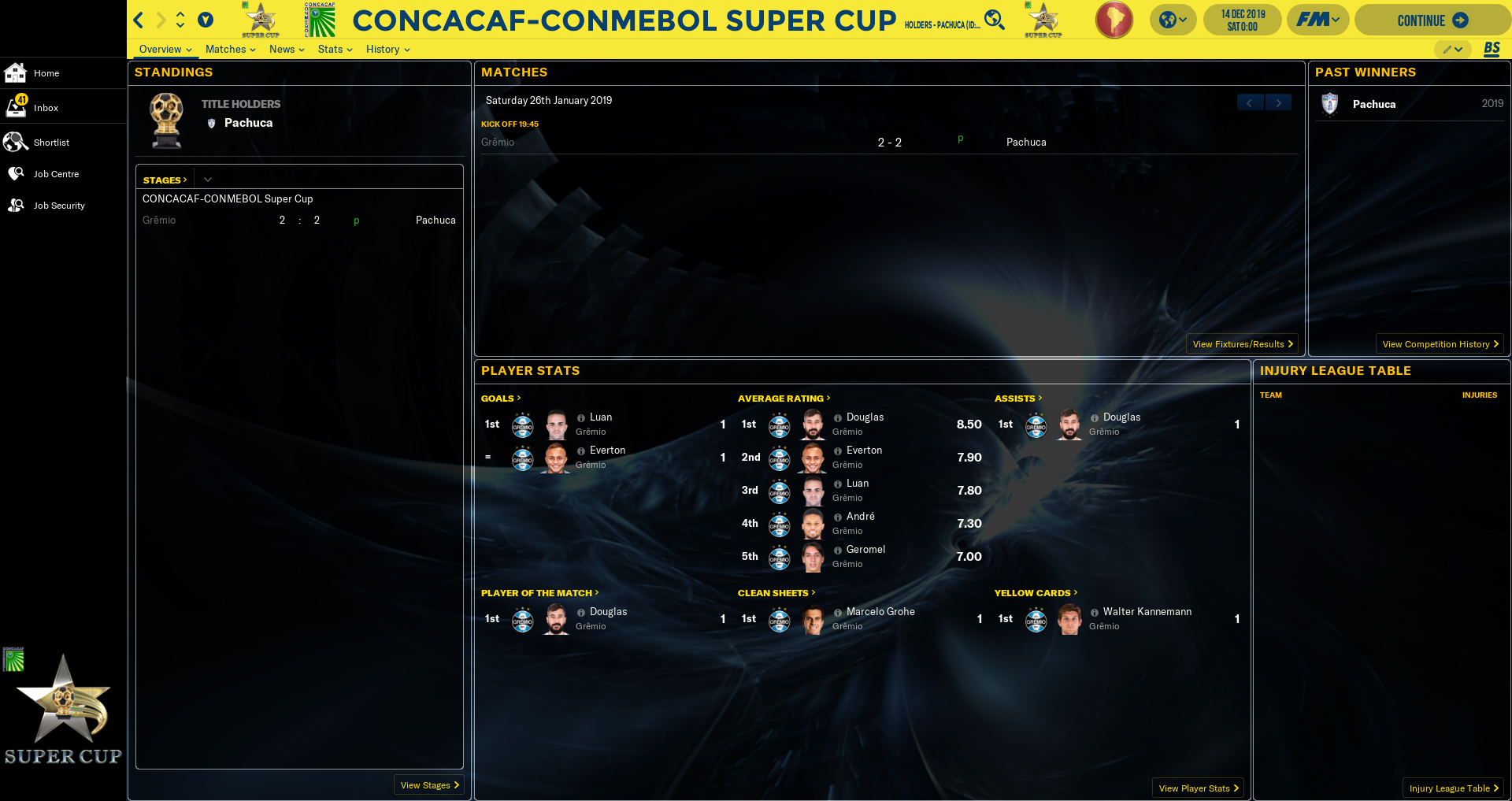 - If you are starting a new game and controlling a team that is competing in the UEFA Intertoto Cup, you're going to need to start your game before June 15th. Activating France as a playable nation will allow you to start your save at June 11th.

- With the exception of the AFC, CONCACAF-CONMEBOL and UEFA Youth League files, only use 1 of the UEFA Revival files when starting a new game. I've made 33 different UEFA files available for download in order to give you options on which format/competitions you'd like to use.

- All CONCACAF-CONMEBOL competitions are scheduled to begin in early 2019.

- Don't worry if you can't register your squads for continental games. It's a bug in the editor but you're still able to just select your squad as normal per game and start the match. The players will be registered automatically.

- The nation rankings are slightly customized to allocate qualification spots, so a couple of nations have been moved ﻿up/down in the rankings for personal preference. You can however change the order in your editor ahead of starting a new game if you wish

- Activating Northern Ireland as a playable nation this year thankfully no longer clashes with the UEFA structure like it did in FM18.

- If your game is displaying the default names for the competitions (i.e. Champions Cup or EURO VASE etc), try downloading the 'Susie Real Names Fix':
https://sortitoutsi.net/downloads/view/43990/fm2019-real-names-and-german-national-team-fix

If necessary﻿, make sure to back up your original confederations logos and then drop the files into the corresponding locations:

NOTE: If you are already using graphics packs, copy the lines of code for each ID from the config files and paste them into your existing config.
NOTE: If the UEFA Cup graphics don't show up in your game, go to Preferences and make sure the "Show unique ID's to assist skinning" box is ticked, as well as "Reload skin on confirm". Then simply change the line of code in each config file for the UEFA Cup graphics, and rename the corresponding graphics to the new ID number. The ID number required will likely be 100000024.
NOTE: UEFA Europa League 2 graphics ID's will need to be added to the config. I left them out because the ID will be too unpredictable depending on what files you use in your save.

I'd like to give thanks to those who have helped me out when it came to getting this file off the ground, such as KingRobbo, Freddie Sands, krlenjushka, KUBI and davie77, as well as anyone else who was kind enough to chip in along the way. Your help is much appreciated, and I couldn't have gotten this project completed without all of you.


If you encounter any problems feel free to let me know and I'll do my best to get them sorted for future updates. Feedback is appreciated.

Thanks for taking the time to read and download. Enjoy!

35 comments have been posted so far.