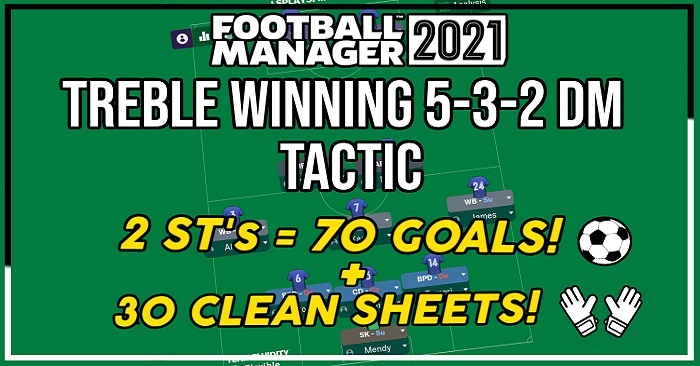 Welcome guys to my Treble Winning 5-3-2 DM Tactic for FM21 which focuses being defensively strong and counter attacking your opponents whenever possible in order to win games!

I used this tactic in three different simulated saves and have also began to use it in my main YouTube save with Kaiserslautern too. While the tactic itself focuses more on the defensive side, it does still score a lot of goals in most cases providing the team using it with the top goal scorer in their league etc. Overall though the strong defensive abilities of it are what often allow for its good results.

To help explain the tactic and how it works as well as all the results of my various simulated saves, I created a tactics video over on my YouTube channel LSPLaysFM! You can find the video below:

The tactic has been extensively tested in FM21 across three simulated saves with Chelsea, Arsenal and Wolves! In every save each team has performed very well and especially defensively, often having either the best or one of the best defences in the league. Often as well teams performed far above expectations and various competitions being won by the testing teams.

The tactic itself managed to secure a treble for Chelsea winning the Premier League, Champions League and League Cup (as well as reaching the FA Cup Semi-Final) with them scoring 67 league goals but more importantly only conceding 24 goals in the Prem. With Chelsea Edouard Mendy managed to get 30 clean sheets across 60 games and Werner also scored himself 49 goals in all comps. Plus the two Chelsea Strikers managed to score 70 goals between themselves.

Arsenal much like Chelsea had a very good time winning a Double and finishing 3rd in the Prem with a total of 81 points, won the FA Cup and the Europa League. Considering they were predicted 5th yet they managed to push on 3 fronts and safely secure themselves Champions League Football, that was pretty good going. Also Lacazette managed to win the golden boot with 25 goals in only 28 games. Finally Wolves had a very decent season too reaching the League Cup Semis and also finishing in 5th on 72 points, only 3 behind 4th place and also had the joint 2nd best defence in the league as well!

You can also see in more detail below exactly how the tactic works and the results in a screenshot format below as well if you’d prefer.

The tactic is a 5-3-2 Tactic but with a Defensive Midfielder sitting in between the midfield and the Defence and also utilises overlapping wing backs and preferably a very pacey striker.

The tactic does rely upon its athletic wingbacks, an advanced forward who is either very pacey and/or good off the ball and then a good pair of offensive midfielders to sit in as the teams two central mids who can help both set up and score goals where possible. 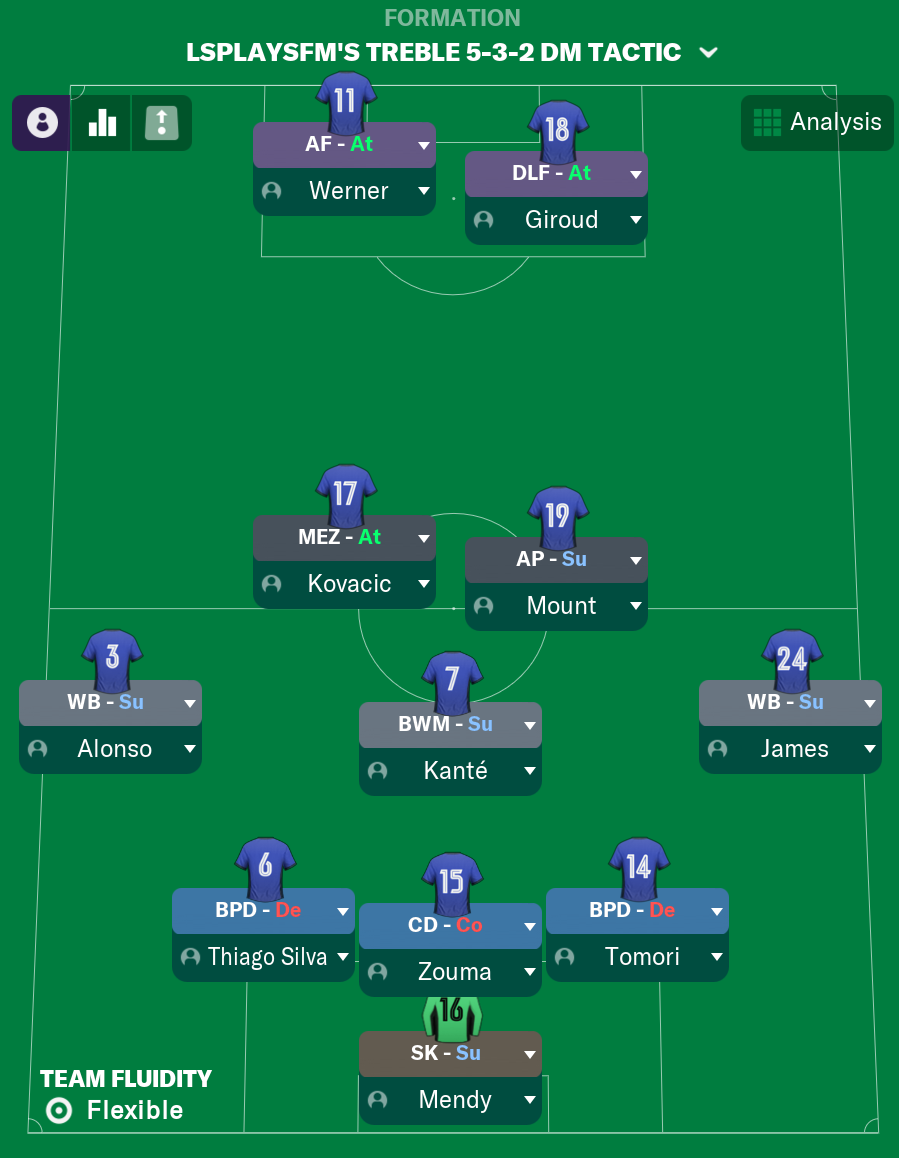 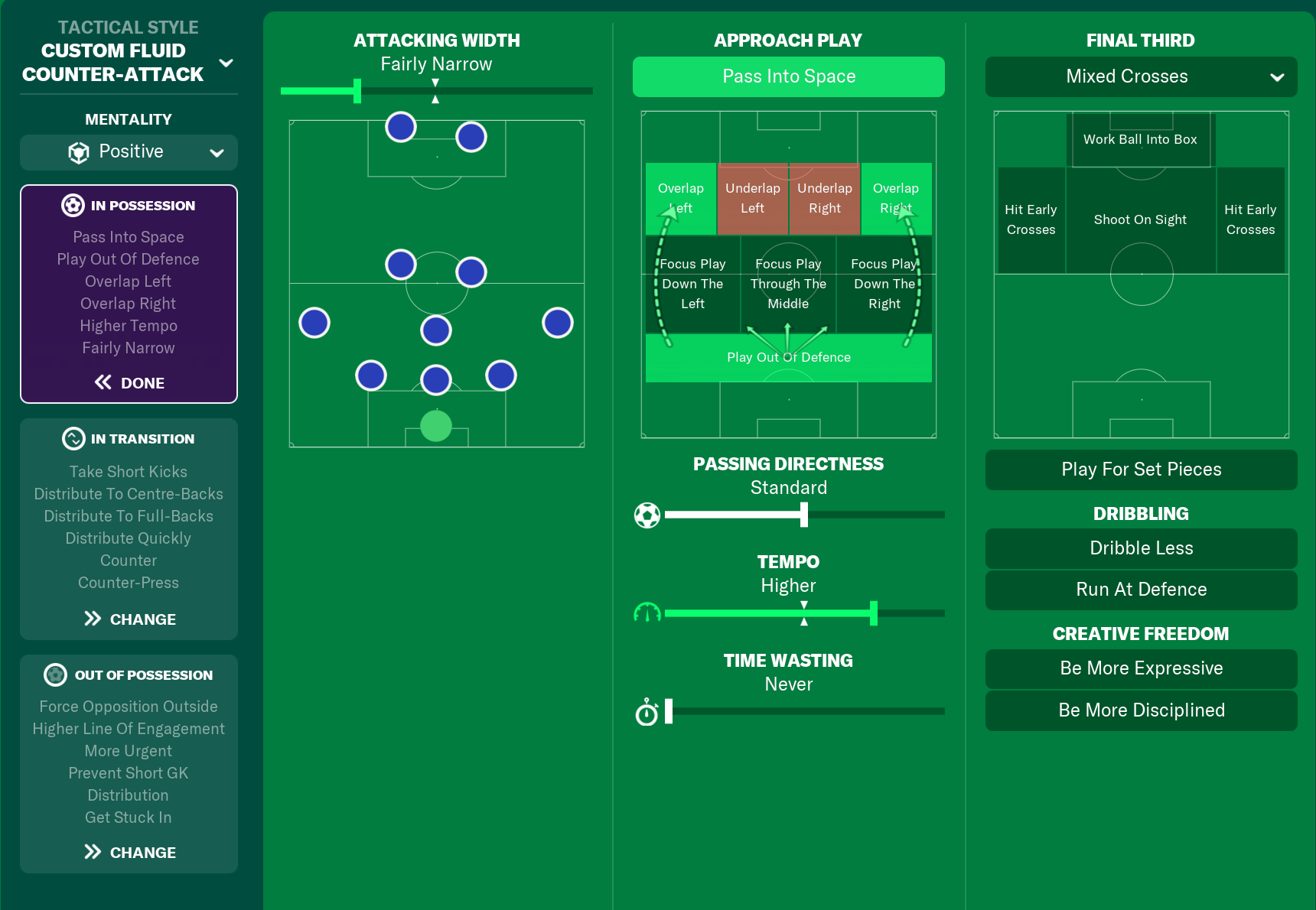 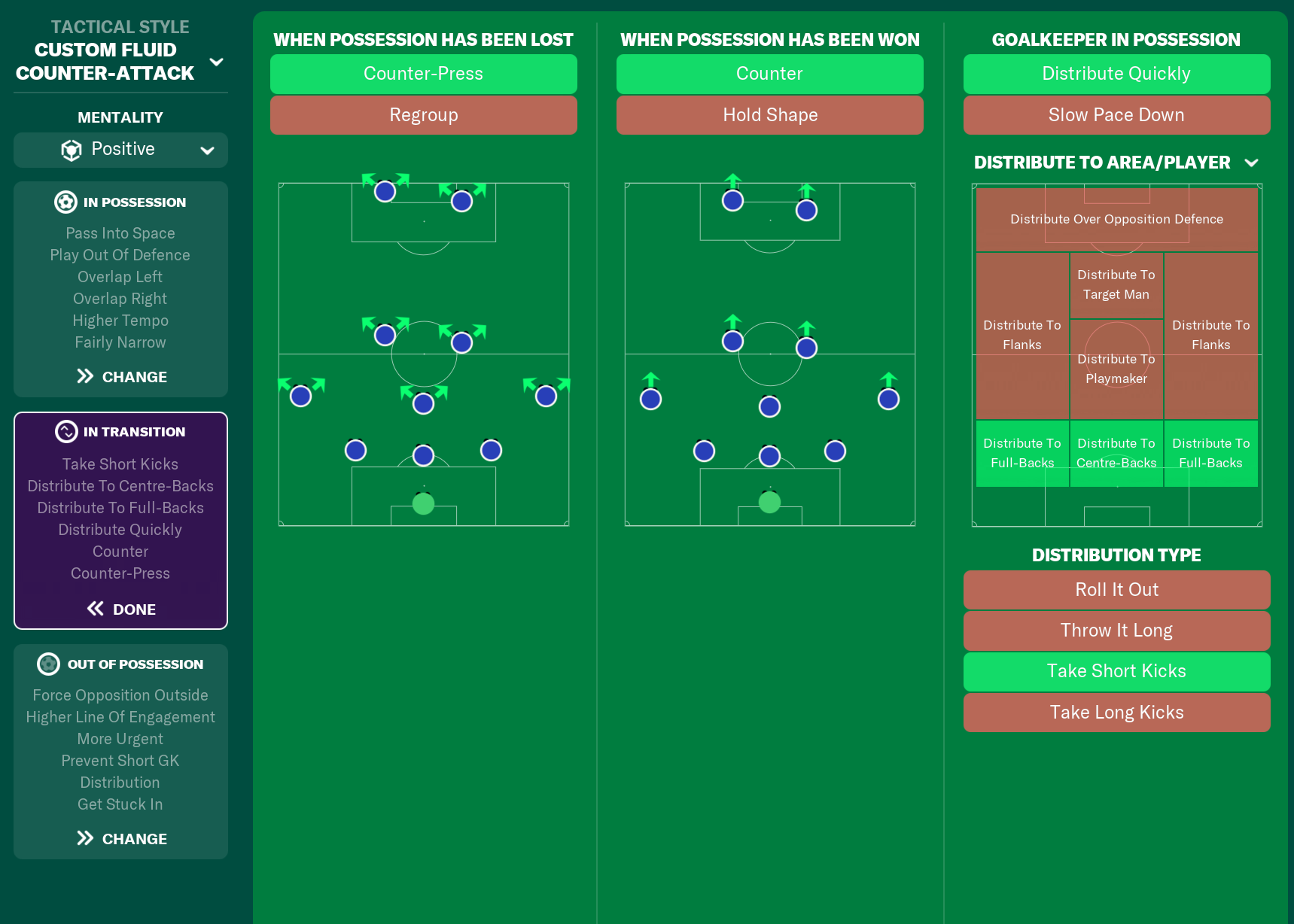 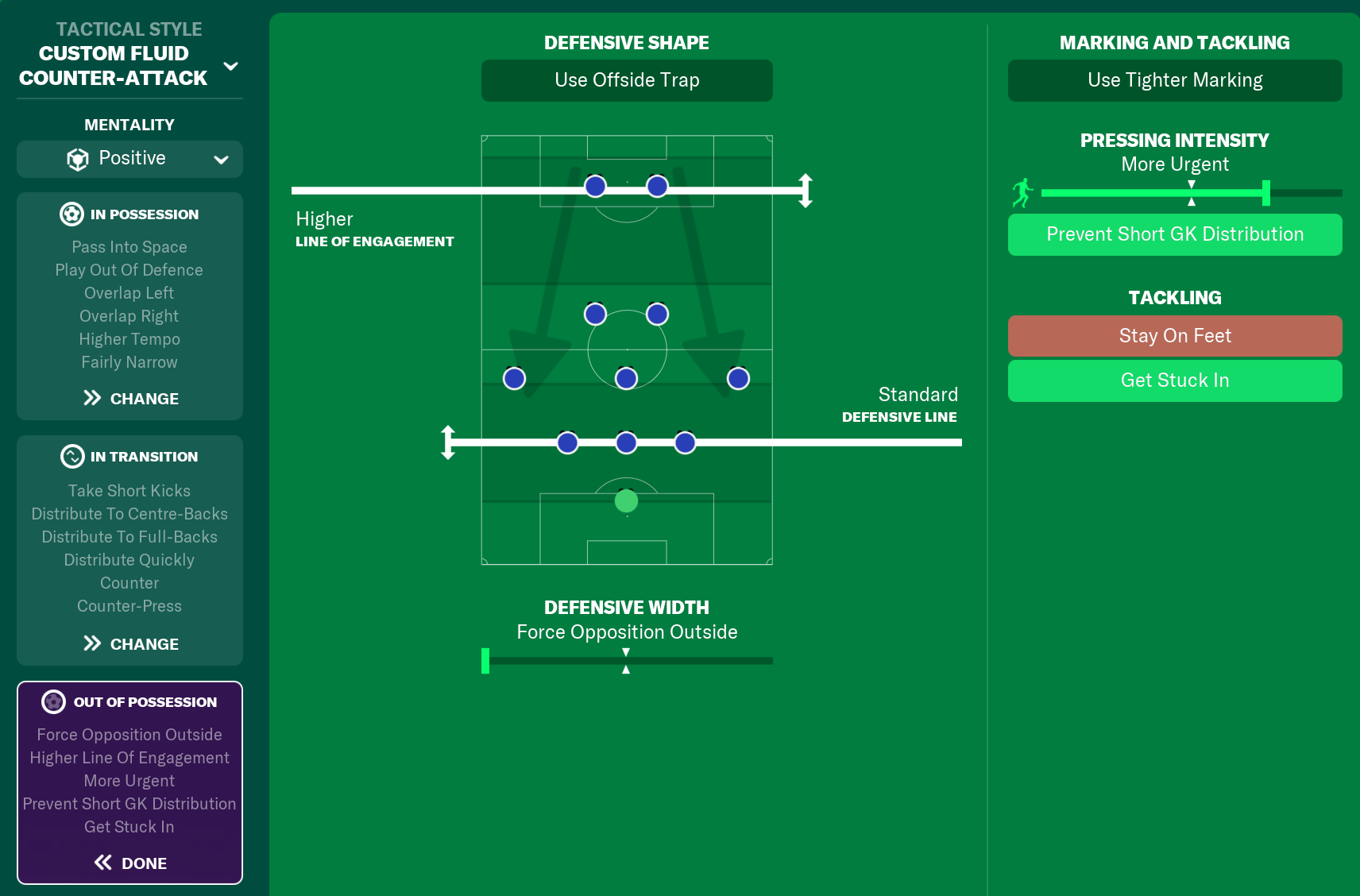 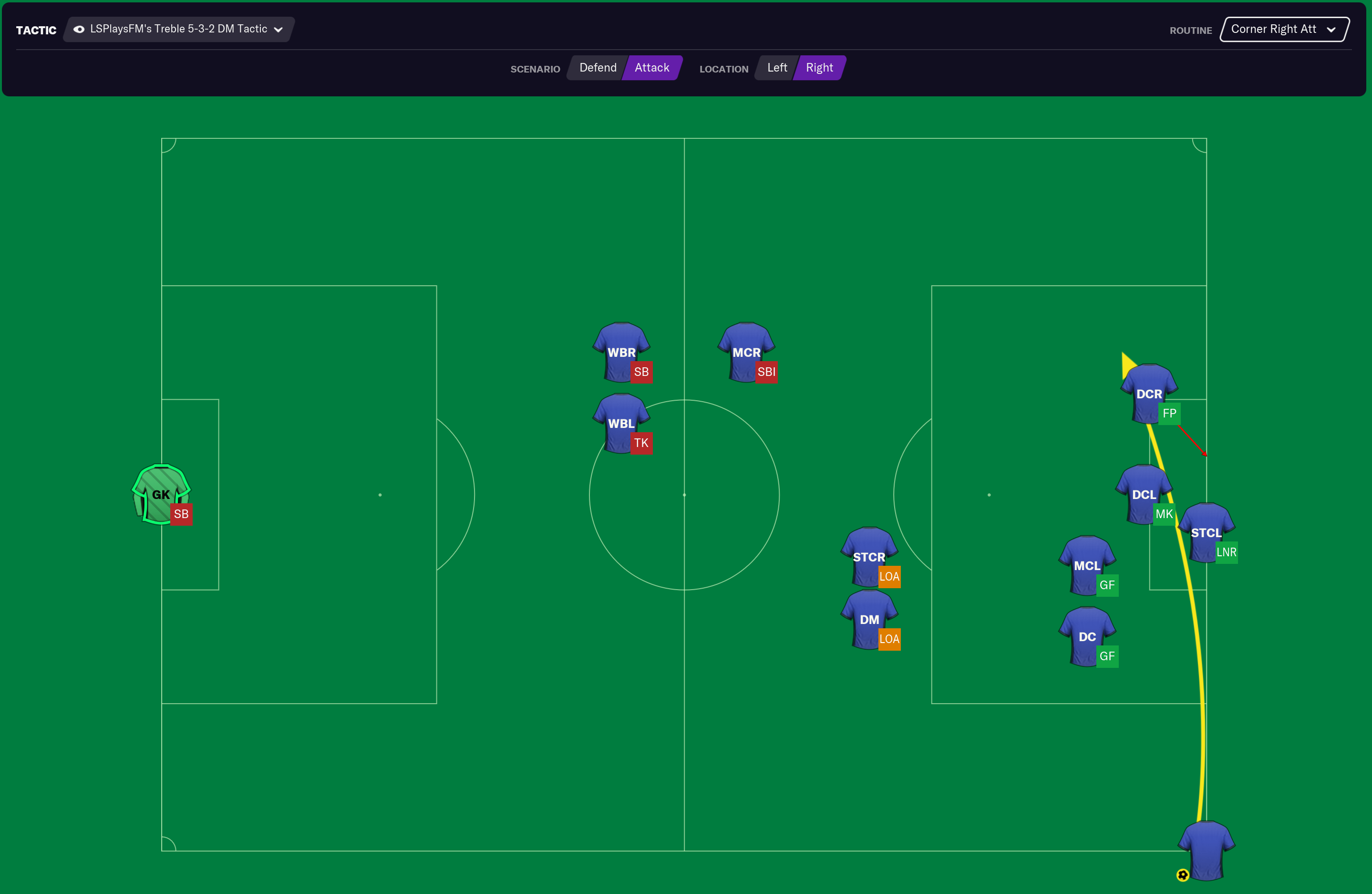 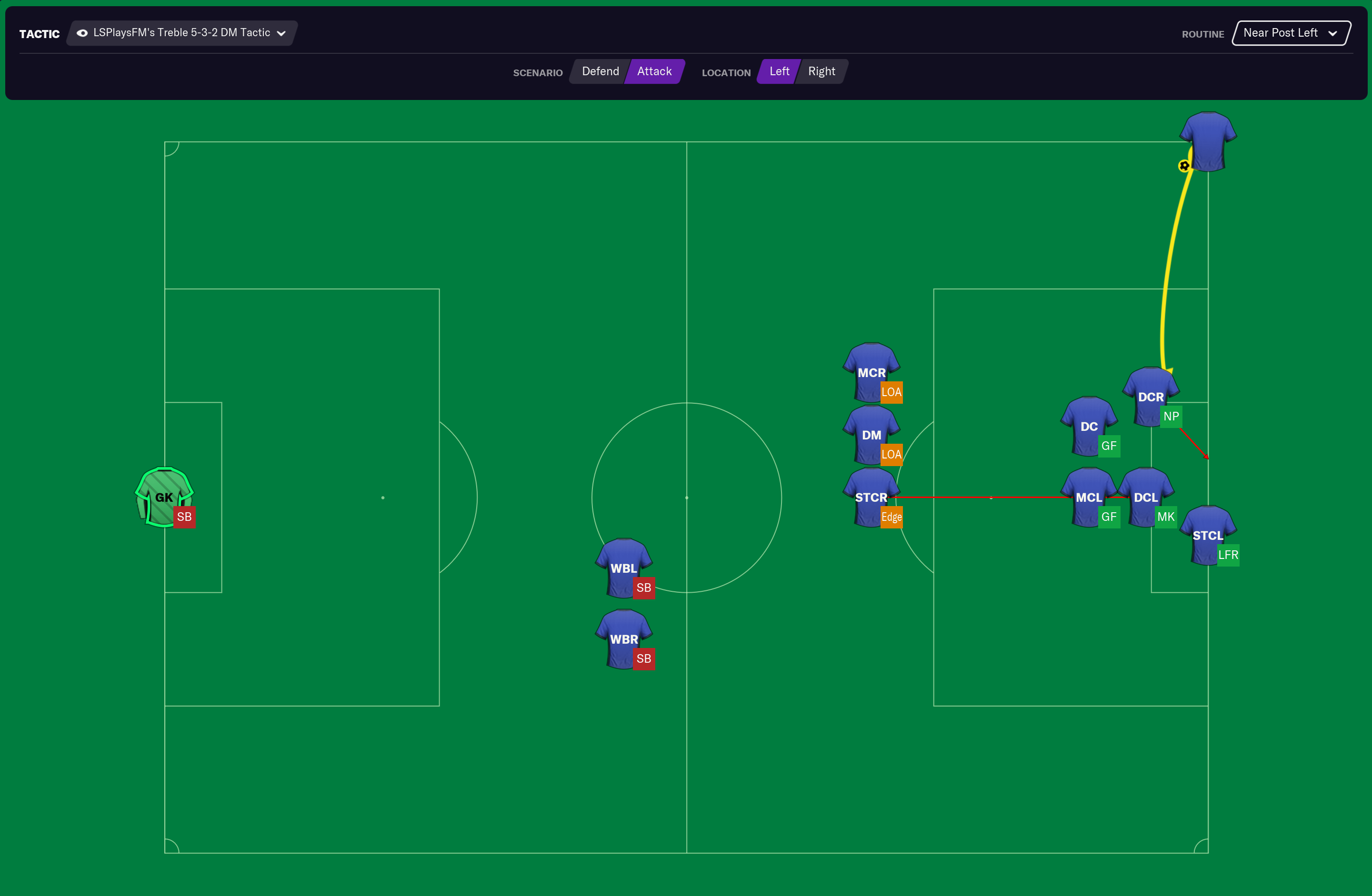 Also in addition to this, my training and opposition instructions are simply set to be handled by the Assistant (I know much to my own detriment). In terms though of player instructions, these are all entirely left to the defaults for each position and I have not adapted these for any player in this tactic. It could well be this could be an area where should you choose to adapt this yourself using any of these instructions, it could help the tactic perform even stronger tbh.

Using this tactic firstly at Chelsea in the first of the 3 simulated saves the side managed to win a Treble including both the Champions League and Premier League! Truly astonishing really based on the players they had and they even had by far the best defensive record in the Prem as well conceding only 24 goals in 38 games. At the end of the season the side finished season 1 on 84 points, winning the Premier League scoring 67 goals and conceding only 24. Werner finished the season as top scorer in the Prem with 29 goals and both Werner and Abraham combined scored a total of 70 goals for Chelsea that season as the 2 main strikers. Also on top of that Mendy took the award of most clean sheets with 21 in 37 appearances. 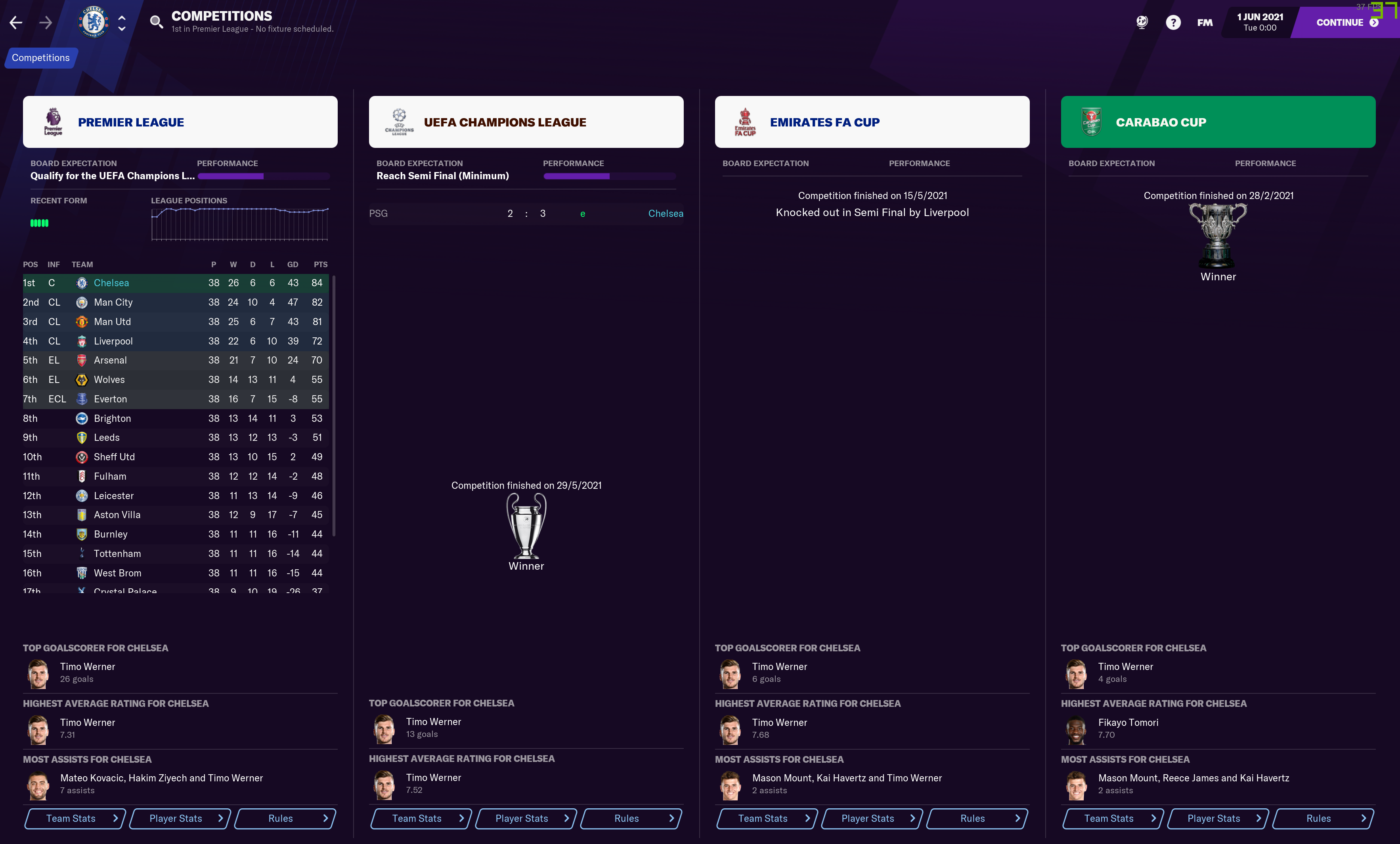 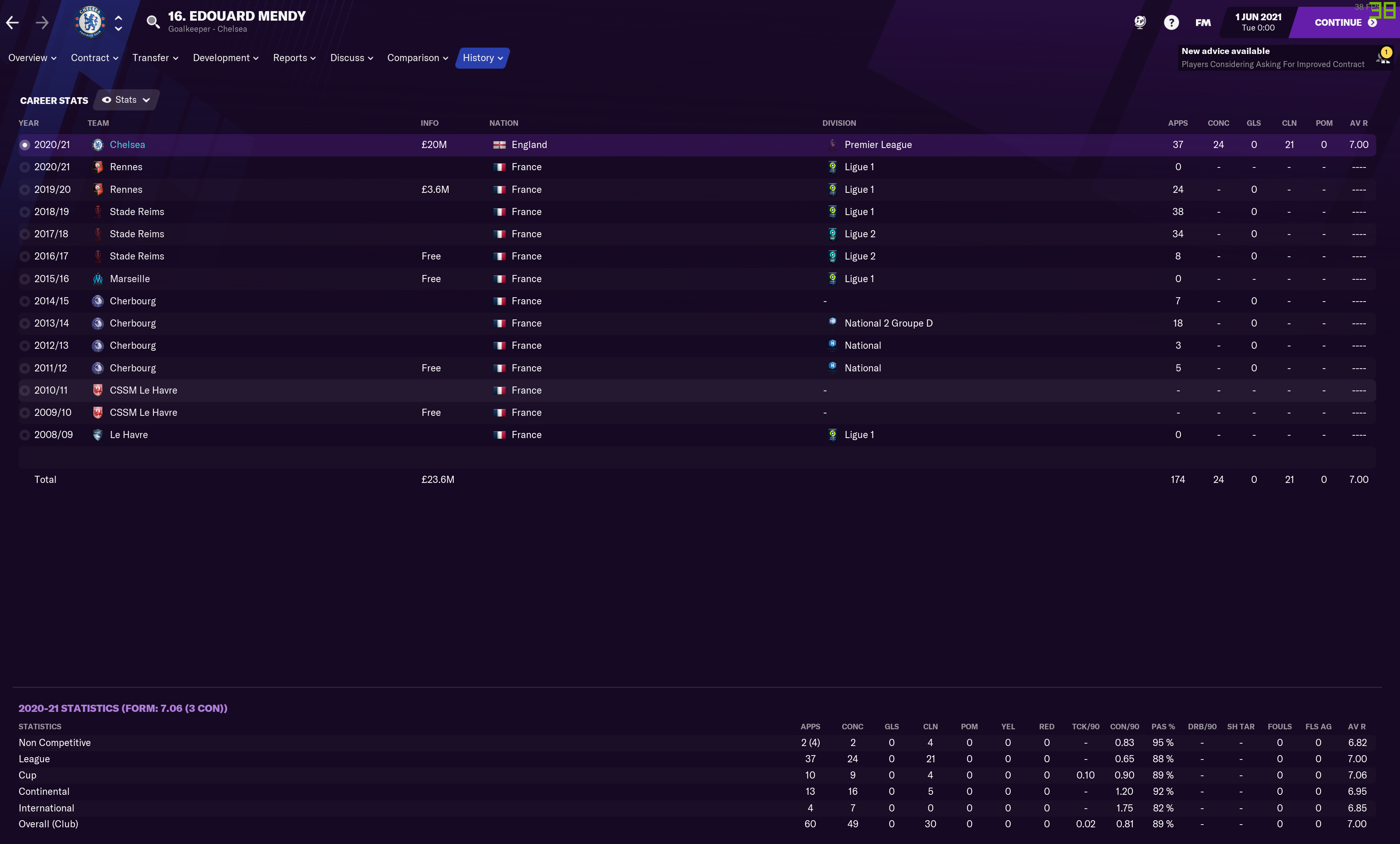 Below your also find the analyst stats for the Chelsea side from the simulation. They were arguably one of the best offensively and were often extremely clinical but most impressive was the defensive attributes which saw them be far and above the best in the league with their defensive capabilities. It was also the case across the Arsenal & Wolves (which I’ll come to shortly). 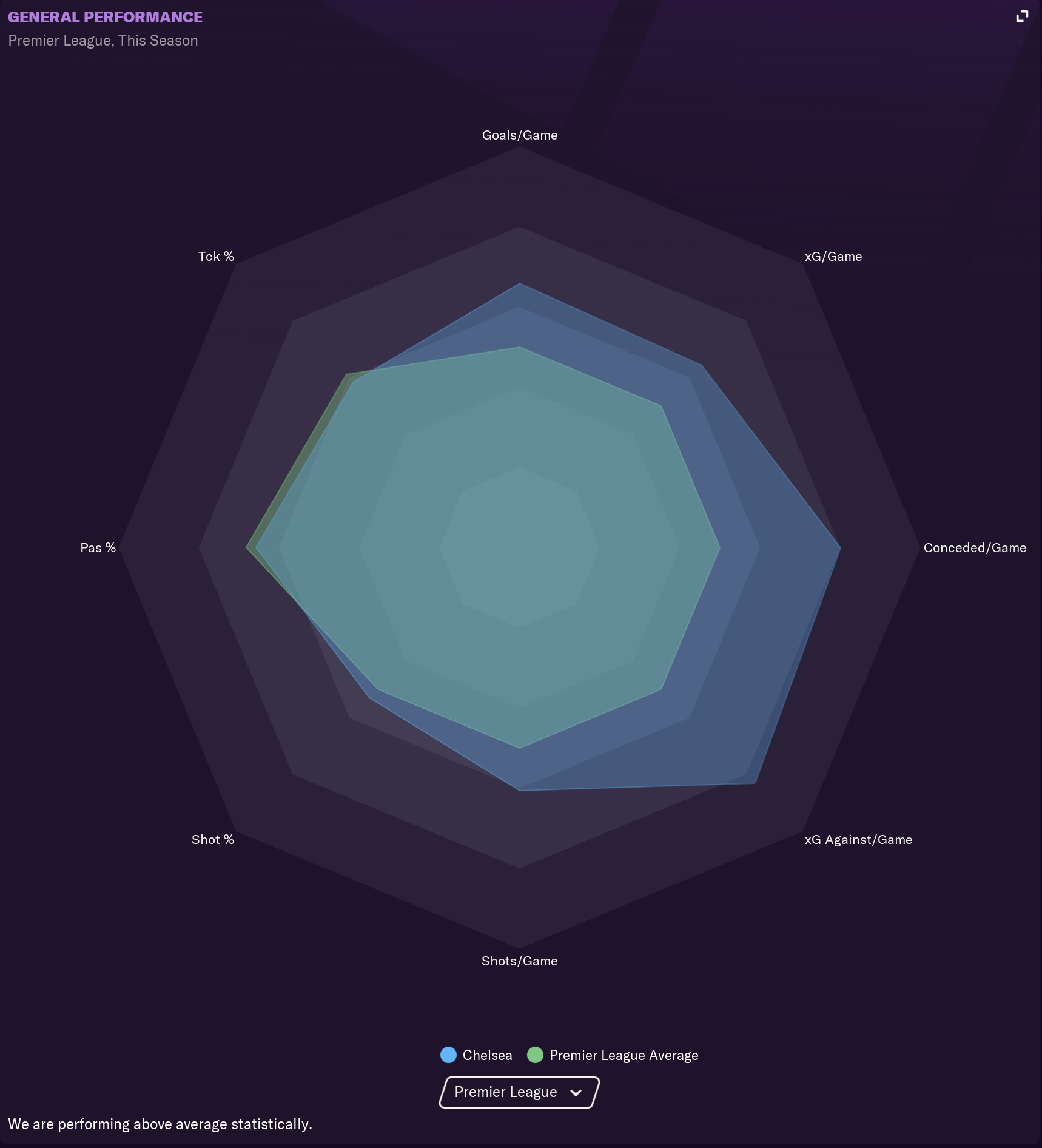 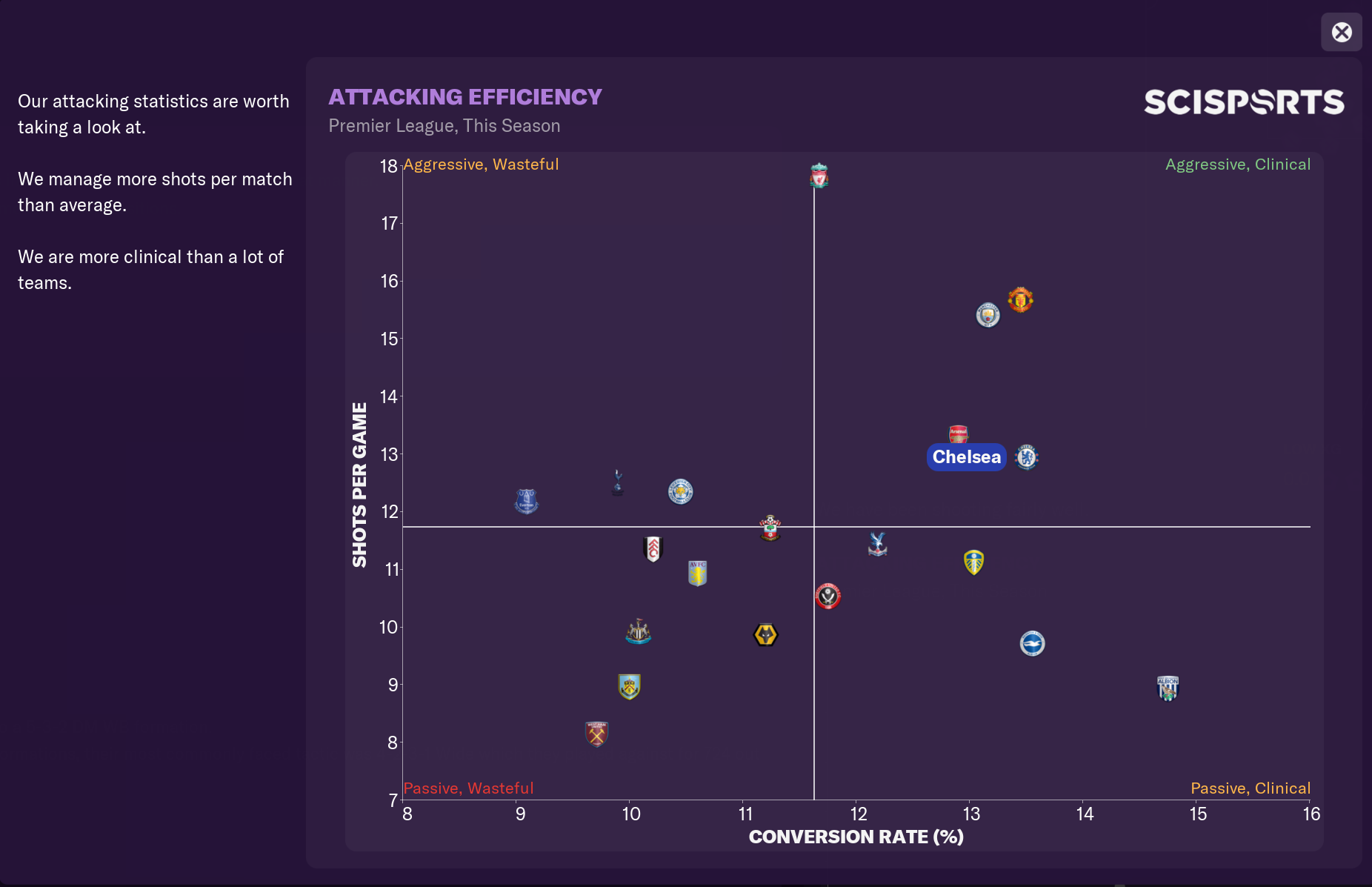 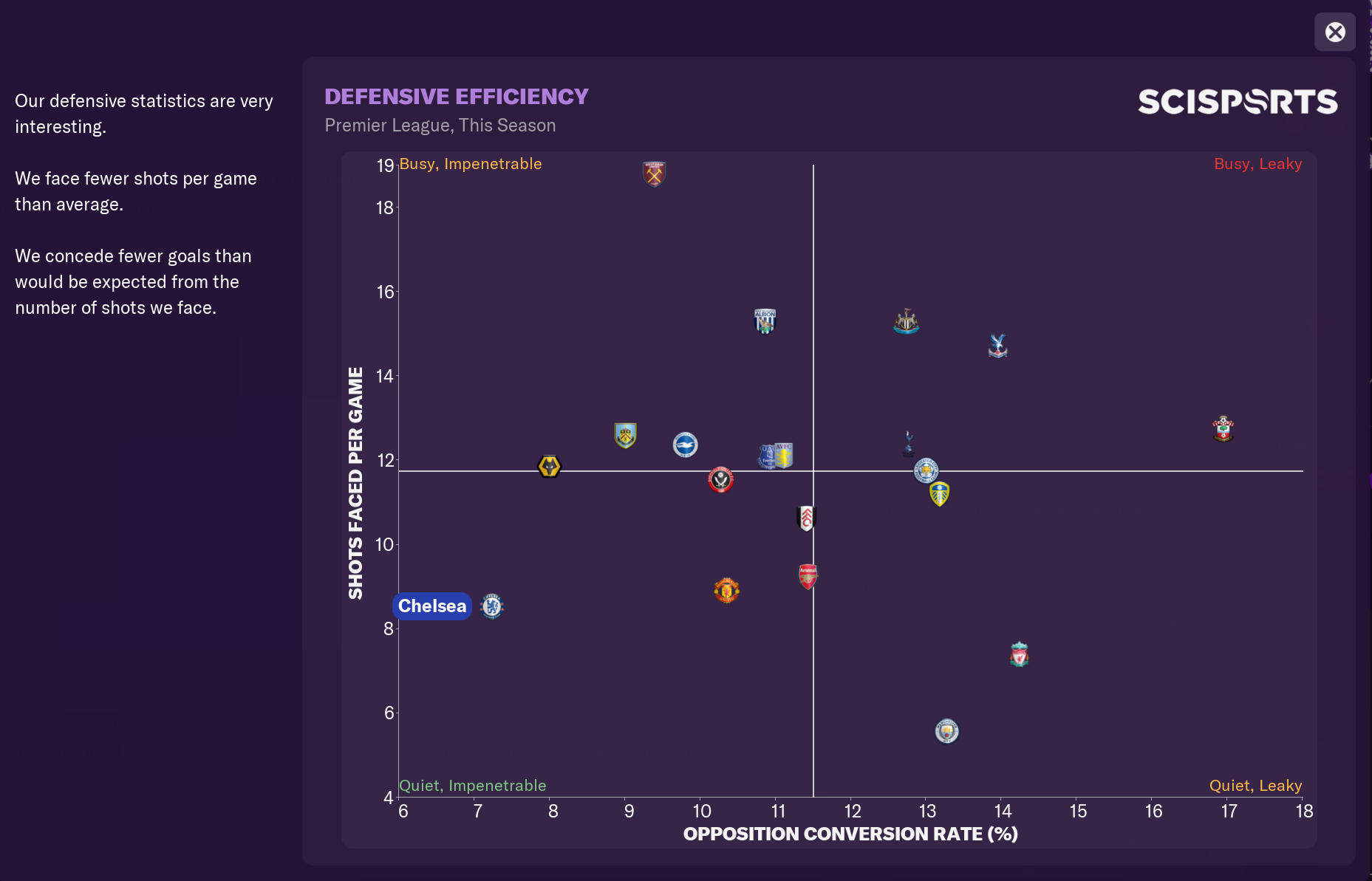 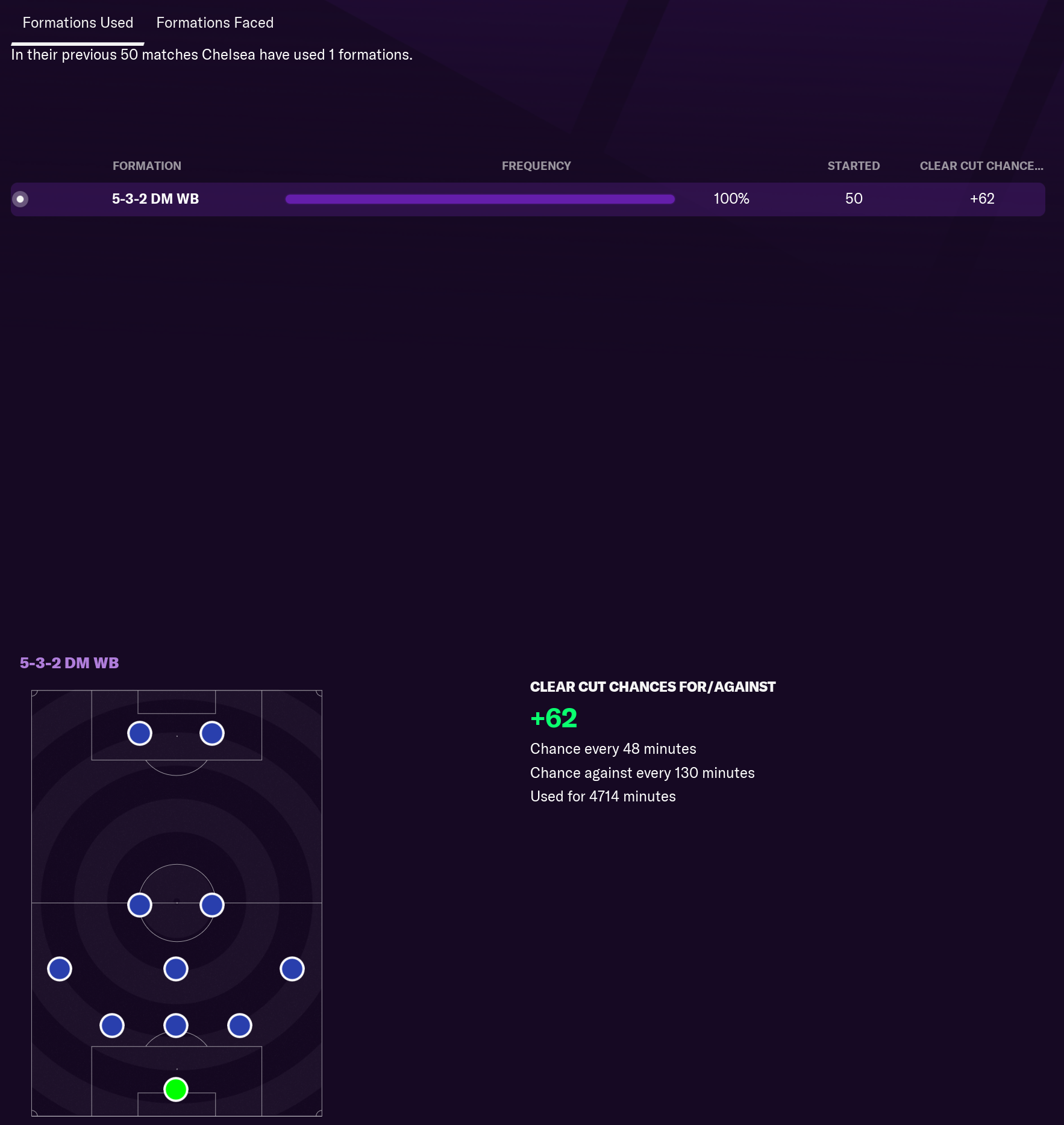 After Chelsea’s success we come to Arsenal who in my opinion were more surprising from this simulation then Chelsea. Considering Arsenal were predicted only to finish 5th and thinking of how poor their defence is in real life and even in game, they performed far better then I expected. The team were lined up as follows where possible during the simulation. 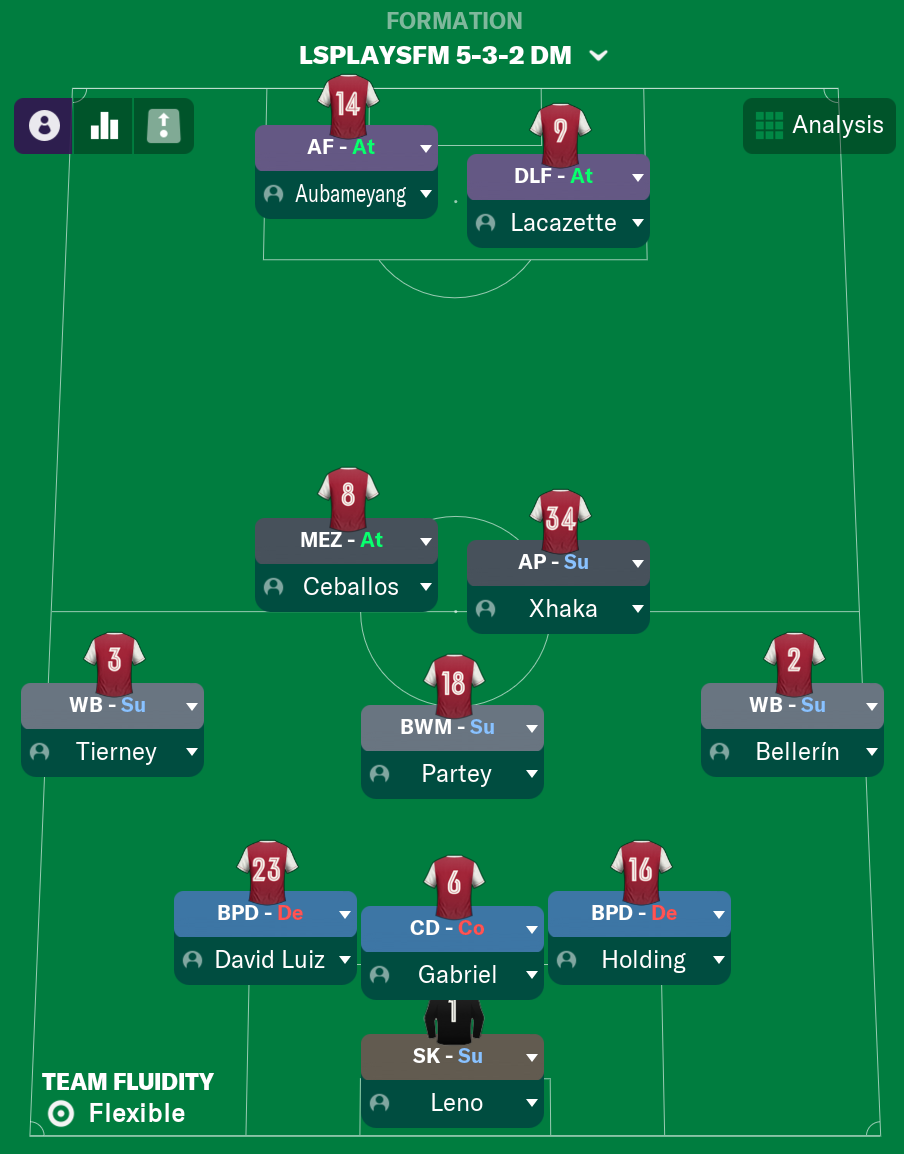 With this tactic, Arsenal had a fantastic season finishing comfortably up in 3rd position and earning themselves 81 points. They were arguably quite unlucky they didn’t finish higher considering in the Chelsea save, 84 was enough to actually win the league. Regardless, the fact a team of Arsneal’s current ability performed as strongly as it did and easily secured Champions League is impressive, however it was their performances in both the Europa League and FA Cup where the tactic really shined. Despite competing on multiple fronts, the team managed to secure a double winning both competitions and even defeating PSG in the Final of the Europa League. On top of that as well, Alexandre Lacazette who was played mainly as an Advanced Forward finished the season as the Golden Boot winner in the Premier League scoring 25 goals in only 28 games. With the performances of both Lacazette and Werner, it clearly highlights how a pacey advanced forward in this tactic works absolute wonders! 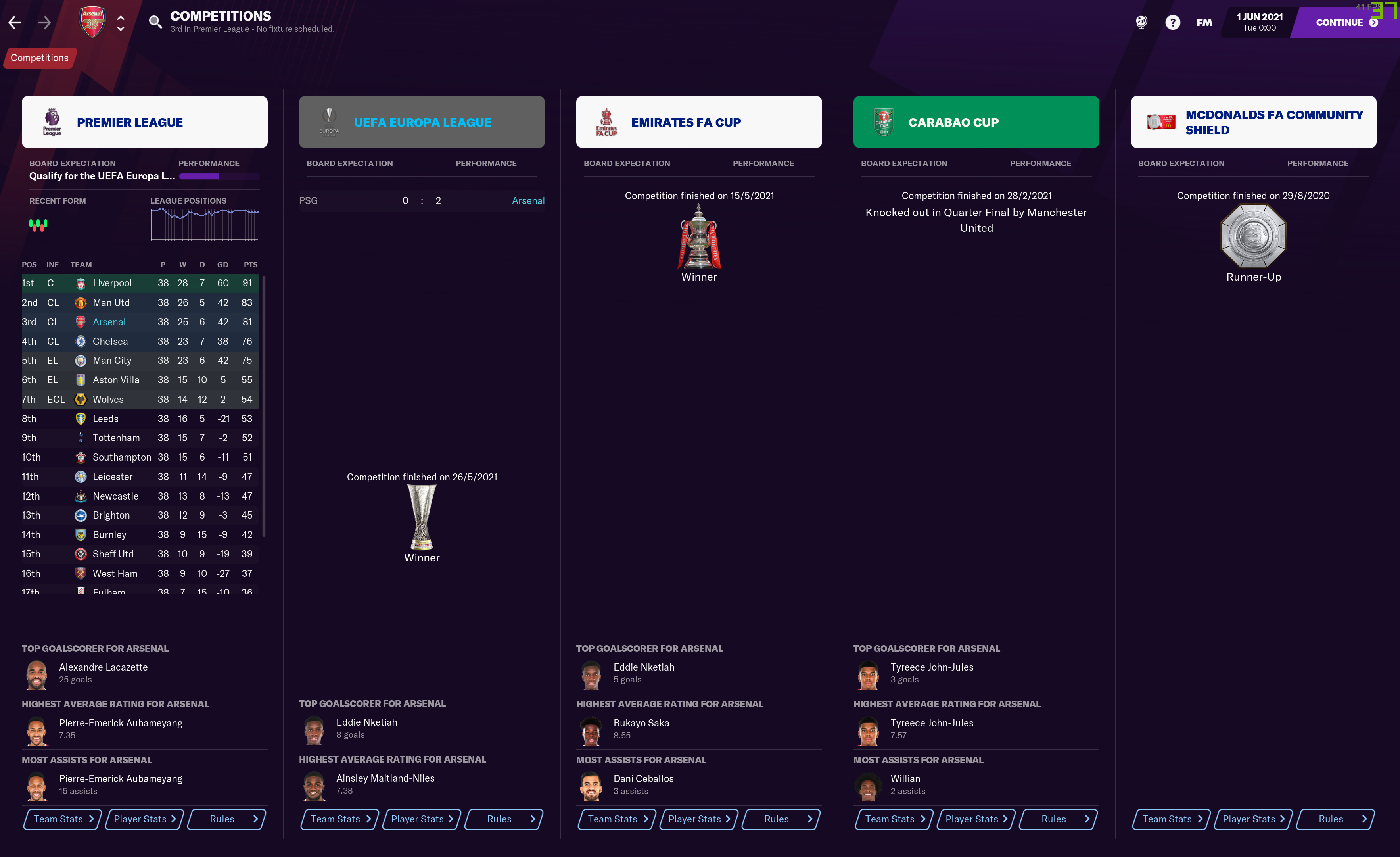 Finally, Wolves was the third and final simulated save and they were predicted to finish down in 8th position. I mainly wanted to test Wolves as well to see how they’d cope without so much of a pacey striker with arguably their key striker being Raul Jimenez. Despite the fact Wolves are a weaker side compared to the other two and lack that obvious Advanced Forward, the side still performed well, earning themselves 5th position in the Premier League and gaining a huge 72 points finishing only 5 points behind the Champions League spots, reaching a League Cup Semi-Final and having the joint 2nd best defence in the league overall. You can see both Wolves results and also their lineup below: 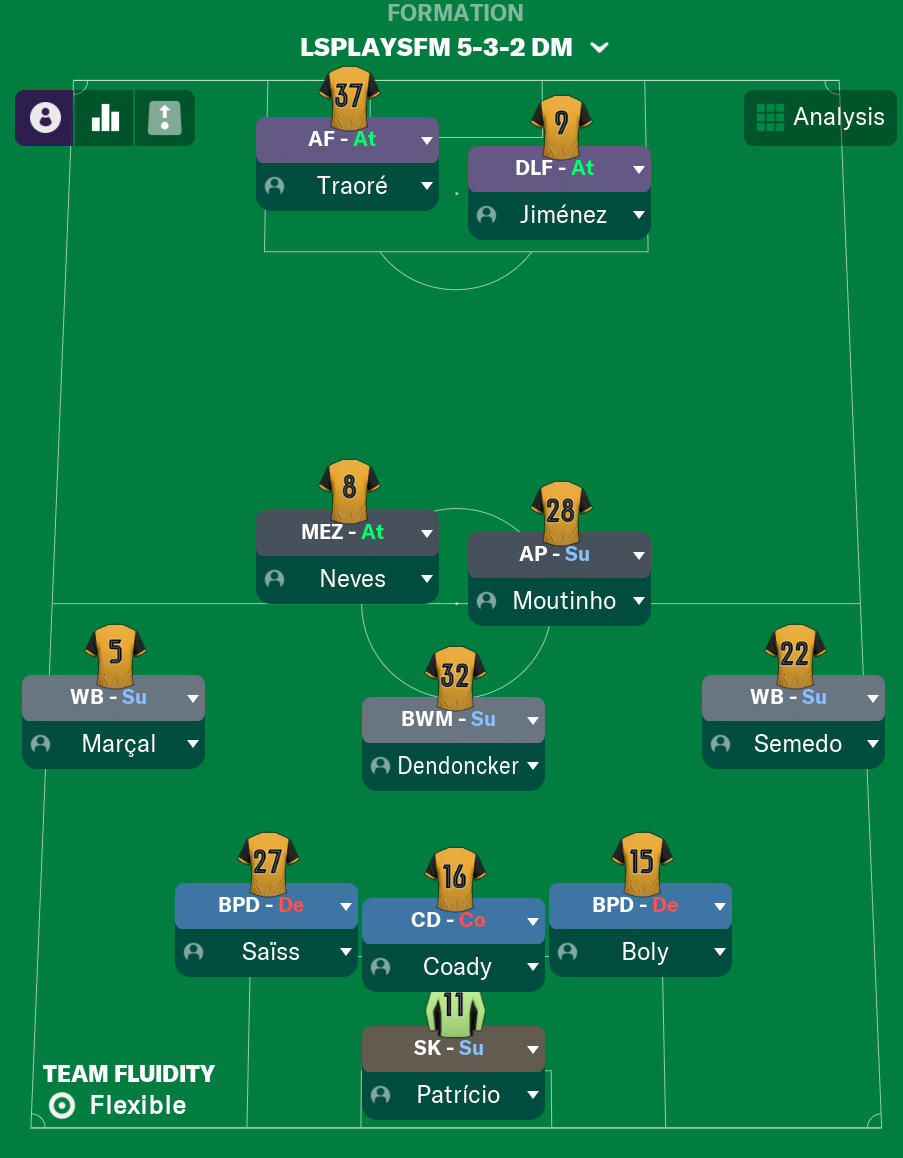 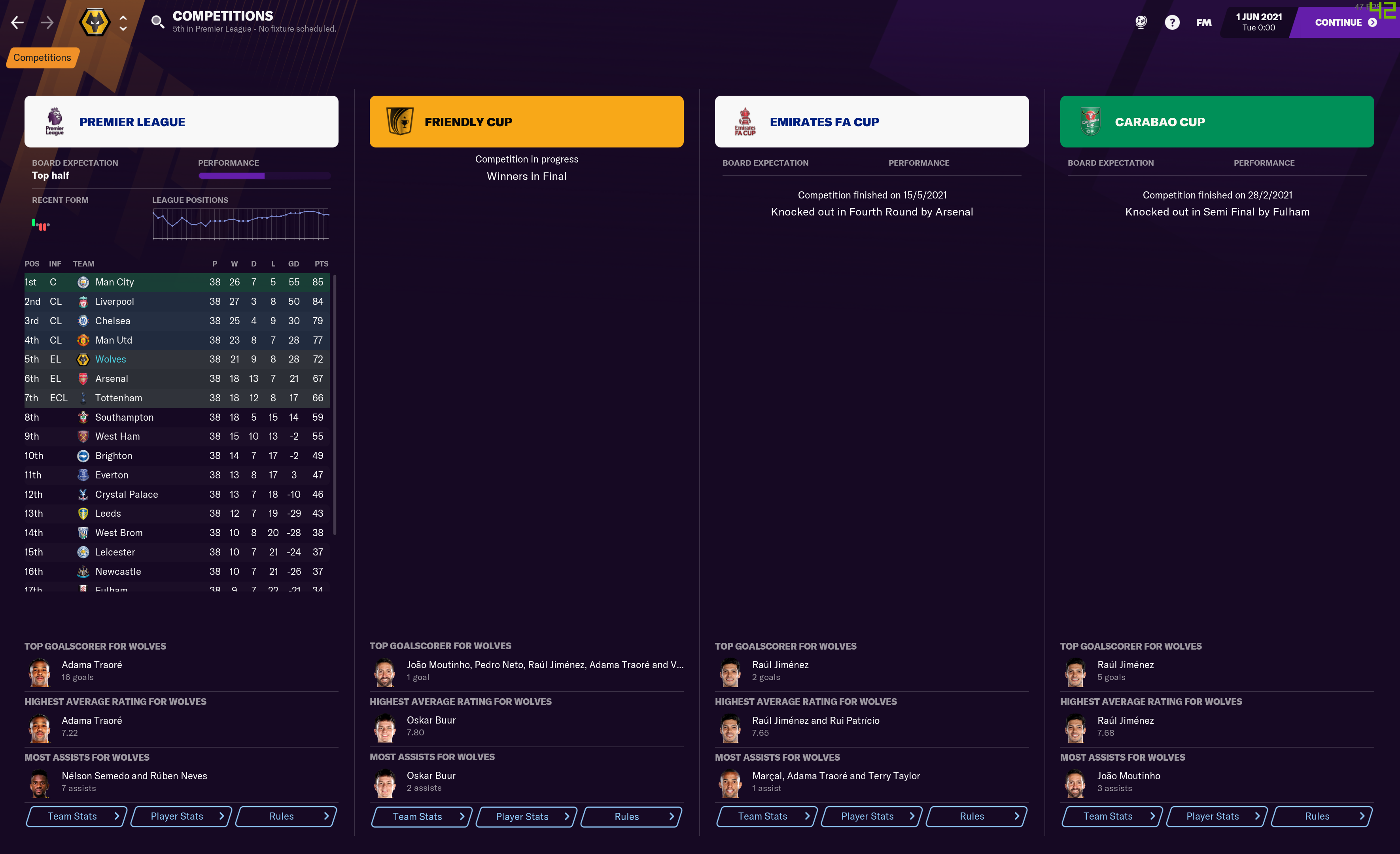 Overall though that is how the tactic itself functions and across each team it was tested with it functioned very well allowing teams to either totally outperform expectations or to dominate the other teams around them and just have incredibly strong defensive showings whenever possible!

As of today (01/03/2021) I can confirm the tactic also works on the latest 21.3.0 patch as I have been using the 5-3-2 DM Tactic on my current main YouTube save with Kaiserslautern. I began using this in season 3 while in the Bundesliga 2 which in the first season of using Kaiserslautern finished top of on 75 points, you can see below the exact stats: 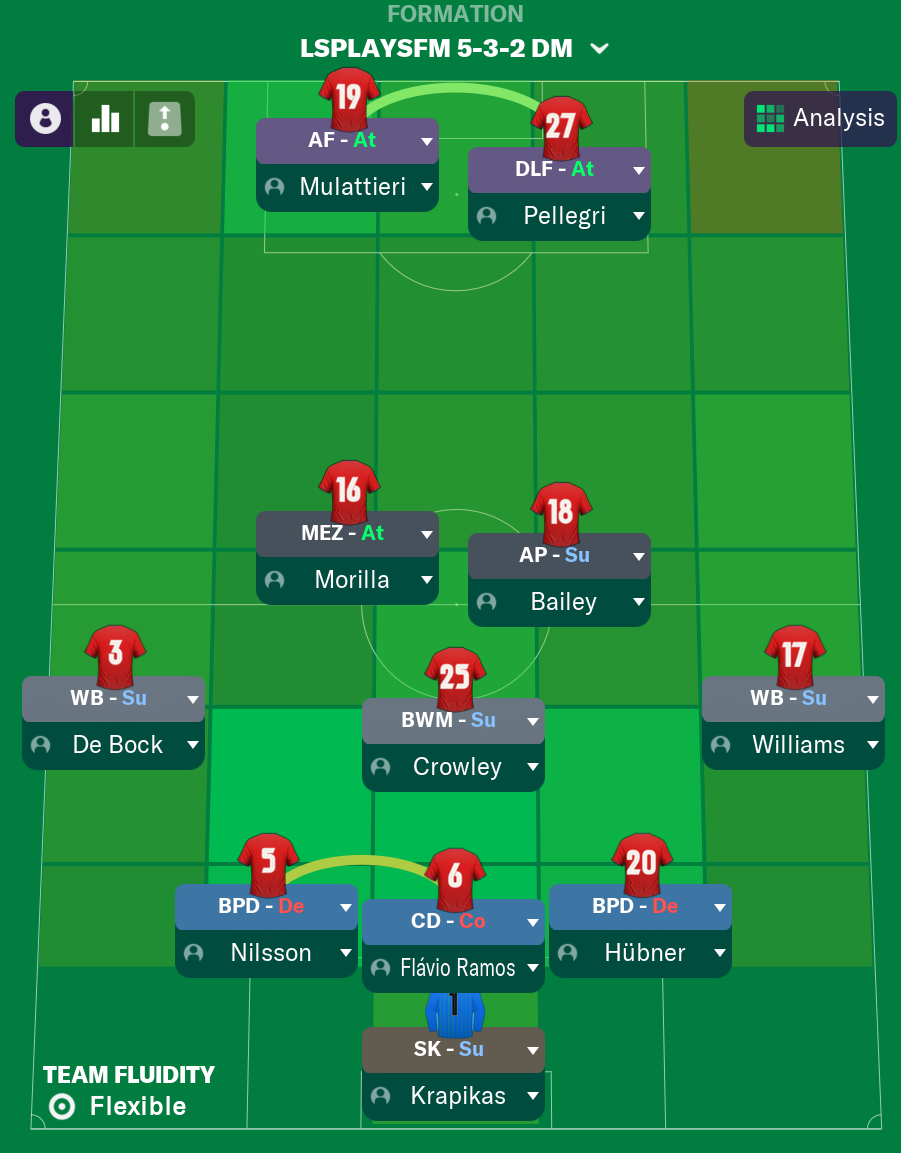 Following on from this, I am now at the halfway point of our first season in the Bundesliga itself and after 17 games played, the side sits comfortably safe from relegation in 8th place, despite being tipped for finishing in the bottom 3. Therefore again showing how even with smaller sides, the tactic does work very well indeed. 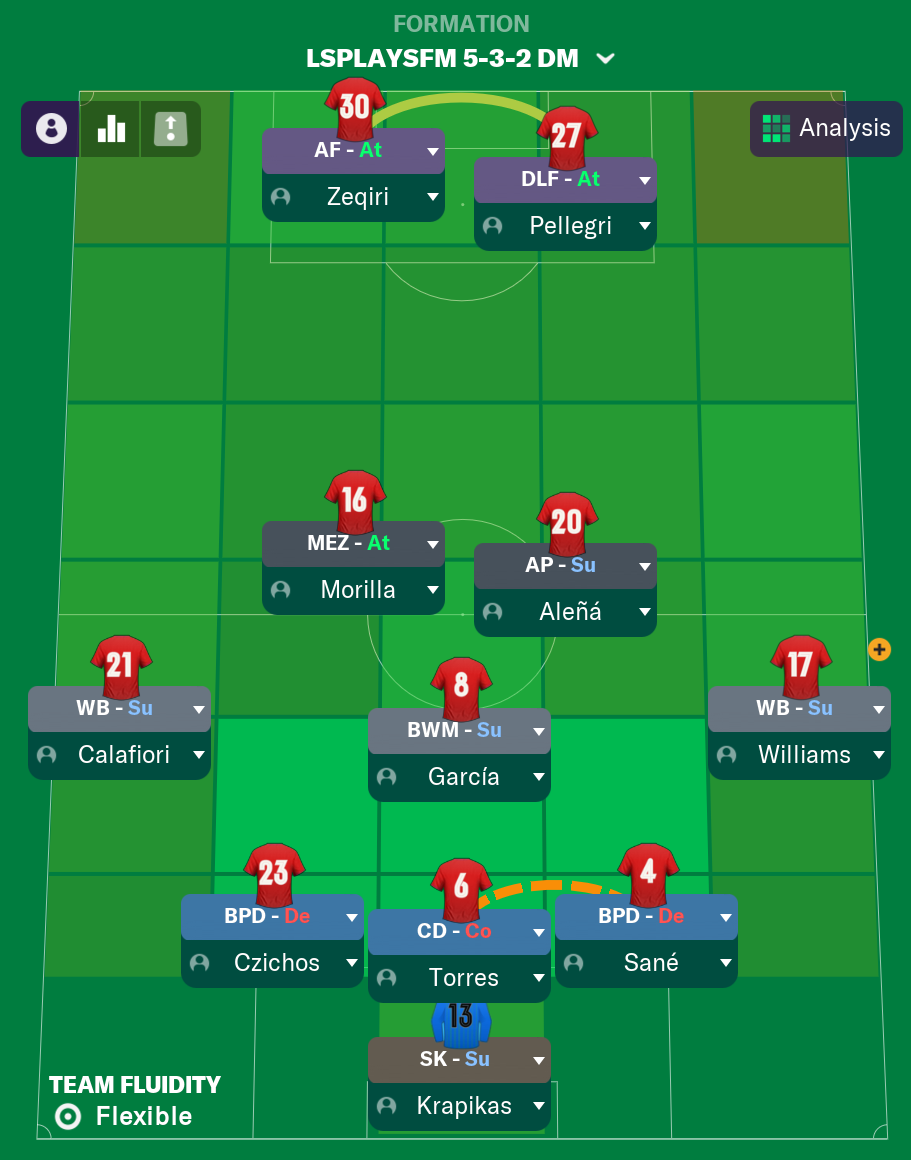 If you would like to see more of the actual save with Kaiserslautern, then do feel free to check out both my YouTube channel LSPlaysFM and the series playlist below where you'll find me using this tactic currently with the team in the Bundesliga.


Please do feel free to download the tactic via the link and I hope you get a lot of good fun and enjoyment out of this tactic on FM!