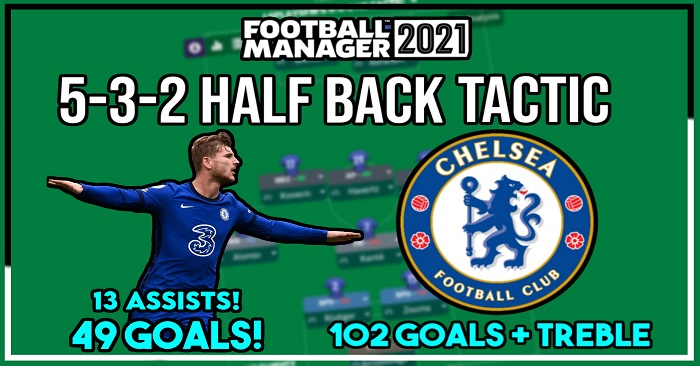 Welcome guys to my 5-3-2 Half Back Tactic, a tactic focused on counter attacking as quickly as possible and having a solid defensive core. This is both a successful tactic at winning trophies having won multiple and very prolific when it comes to scoring goals! It works by creating a lot of chances on the counter and having a very high conversion rate in front of goal.

I have been using this tactic in my main YouTube save with Kaiserslautern (The Red Devil Revival), where this tactic has been one I switch to when chasing goals, however I am looking to use it on a permanent basis based on how well it works. It has also been used in 3 test saves in FM21 with Chelsea, Wolves & Brighton. In all of these seasons the tactic works very well with any size team always overperforming!

The tactic is a 5-3-2 or 4-1-3-2 tactic with a Half Back sitting between the Centre Backs & 3 man central midfield. It utilises athletic wingbacks who get up and down the pitch to both attack and defend (and are vital for the success of the tactic), a pair of strikers, one who is an Advanced Forward which will often provide the majority of goals for your team and of course the Half Back who sits in front of the defence both offering extra cover defensively and a good way to build up play from the back.

In each save every team performed very well, both good defensively often having one of the best defences in the league and also the best attack! With Chelsea, Wolves & Brighton each side performed above expectations all getting some level of European football in the league and with Chelsea they managed to win themselves a treble. 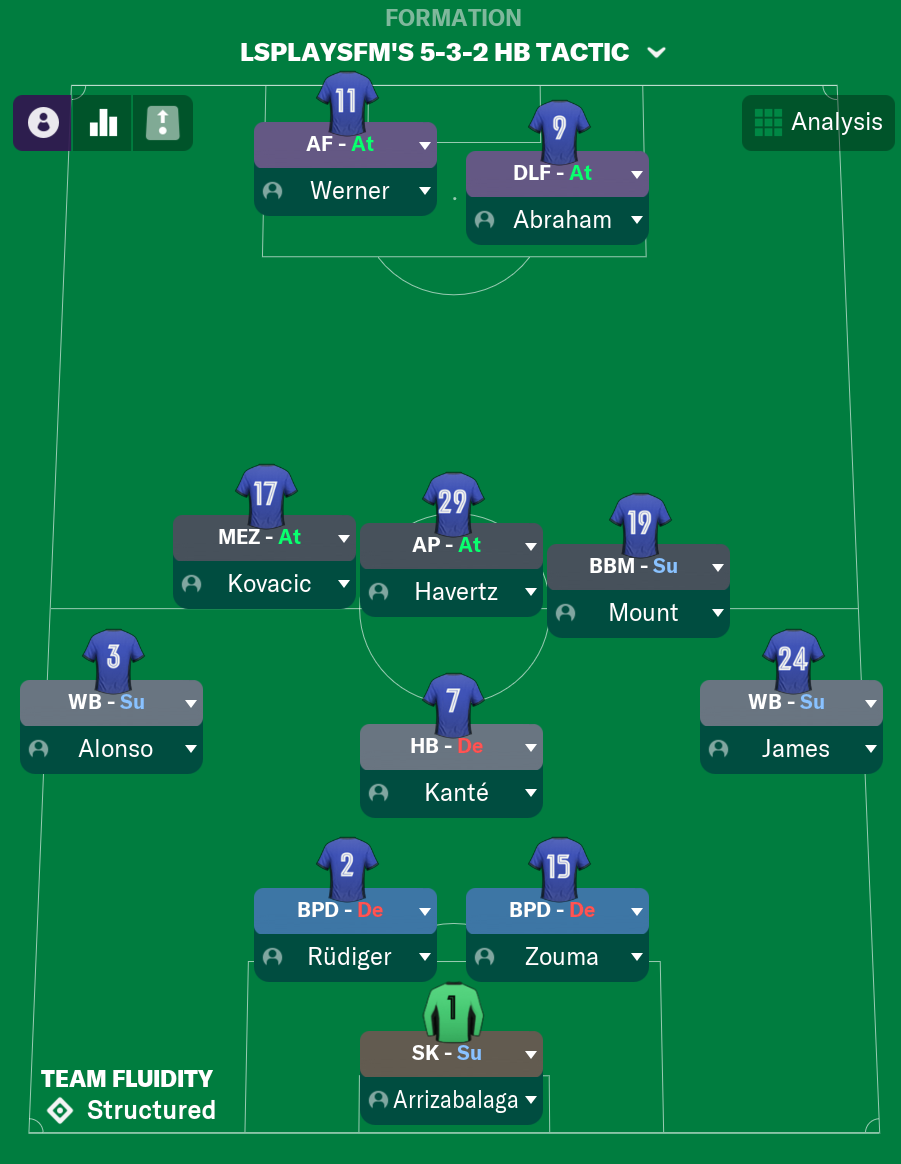 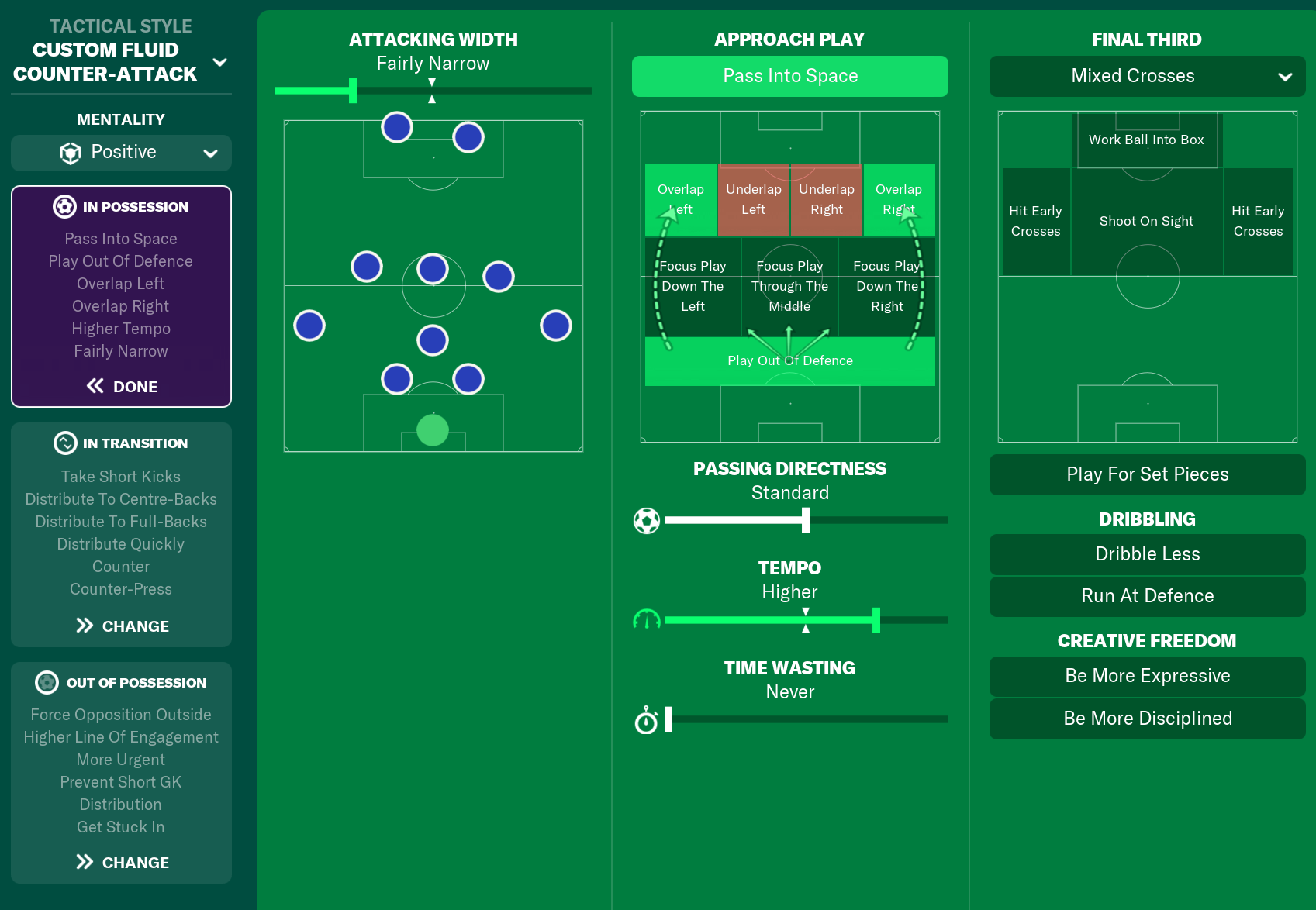 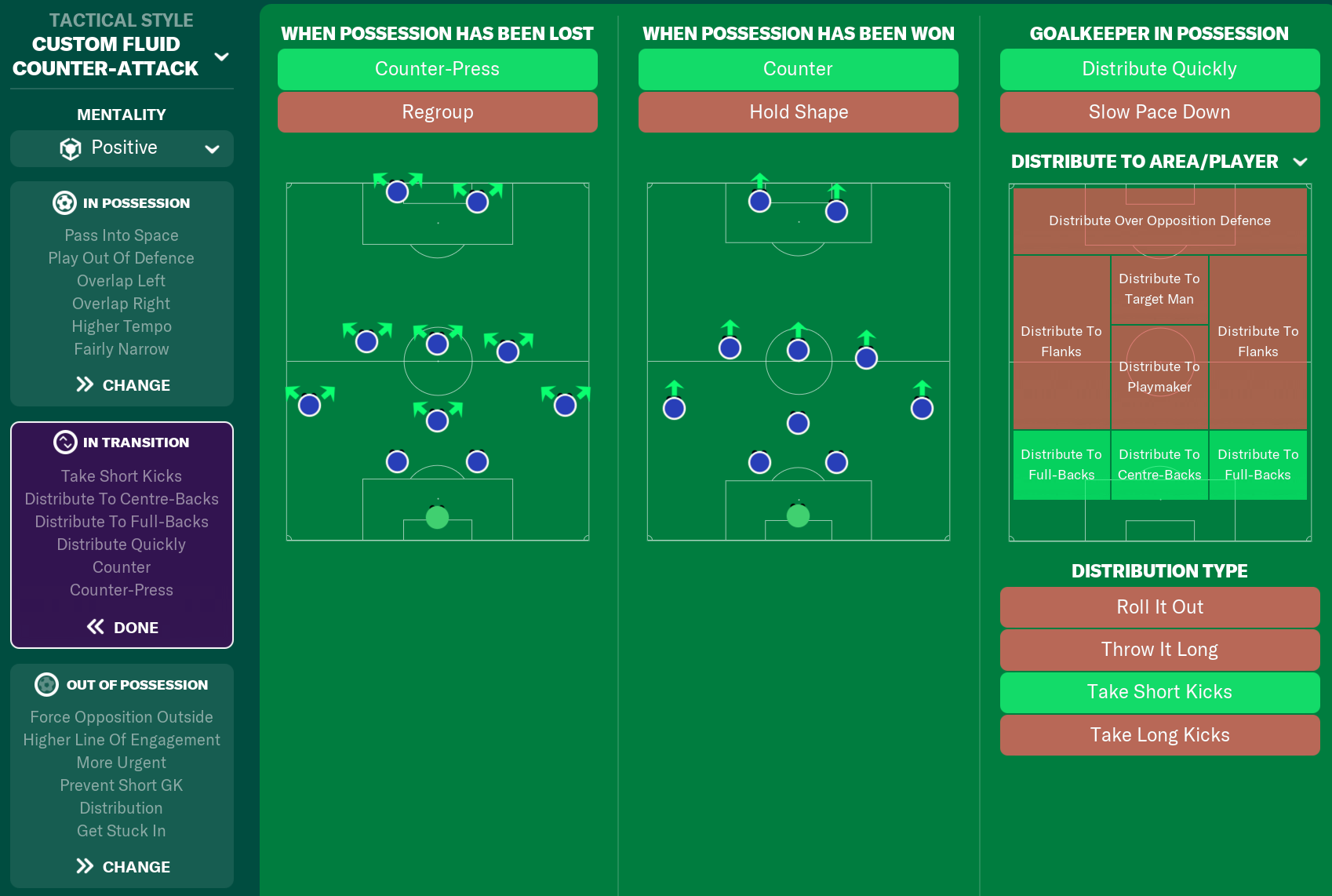 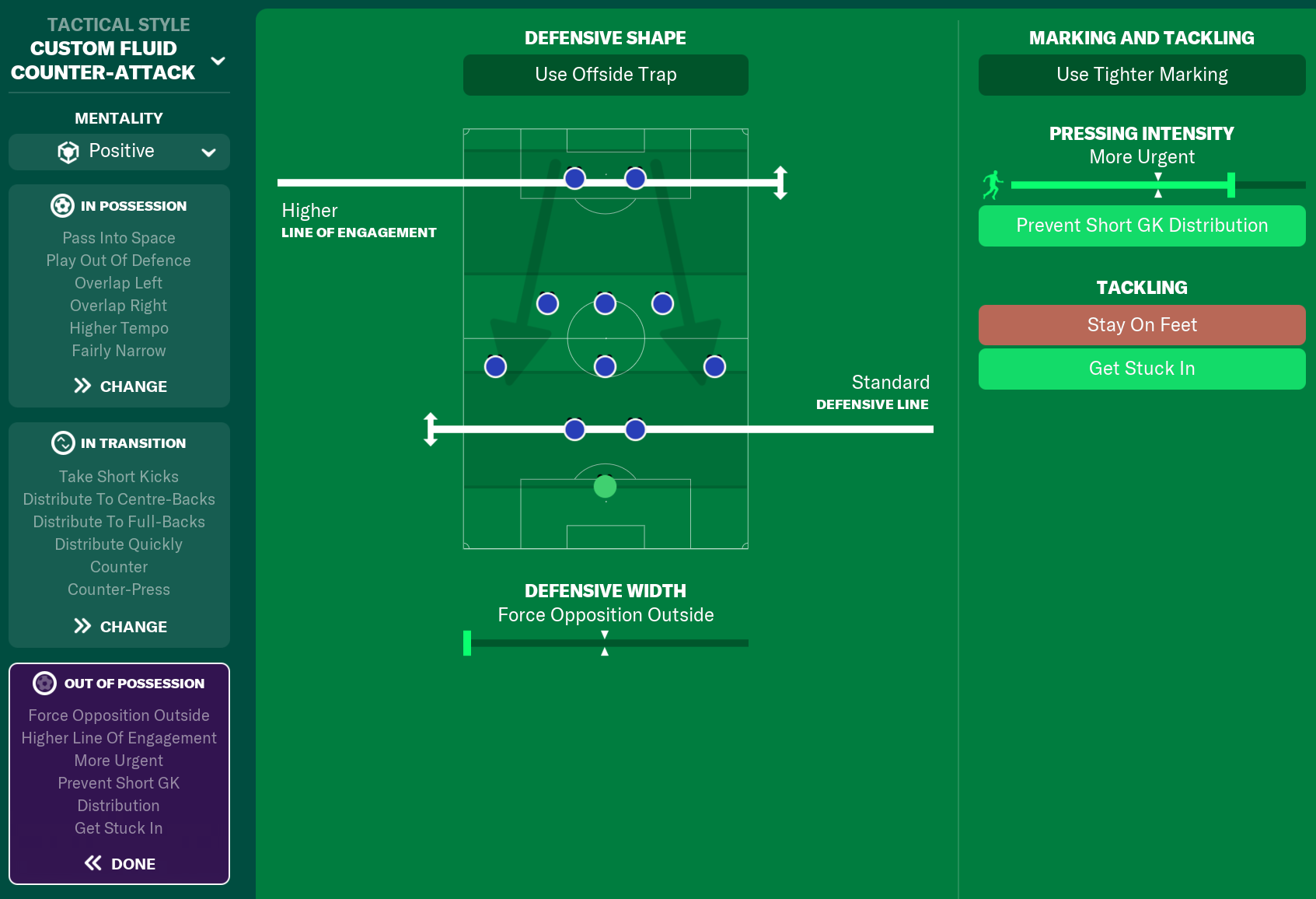 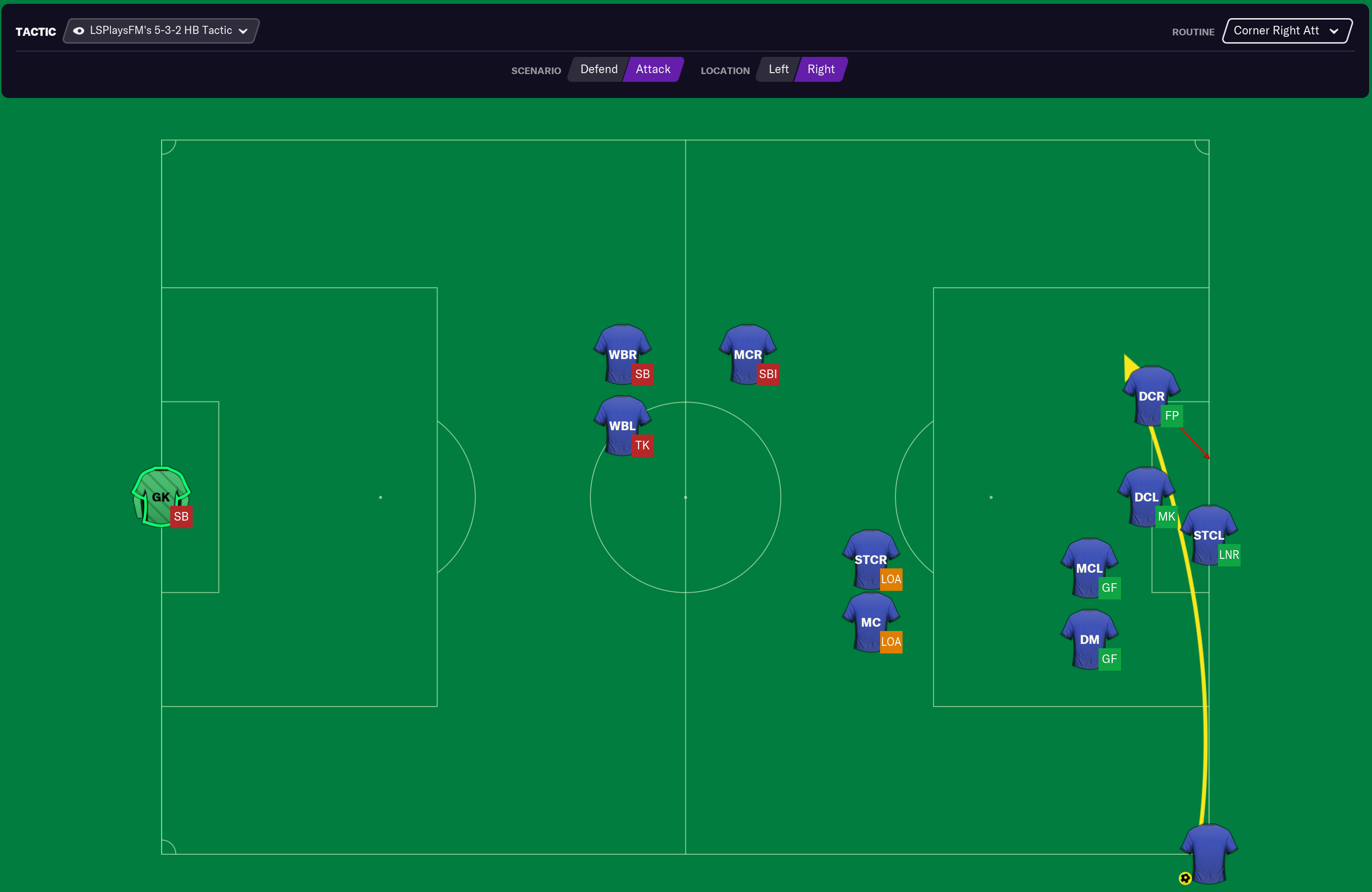 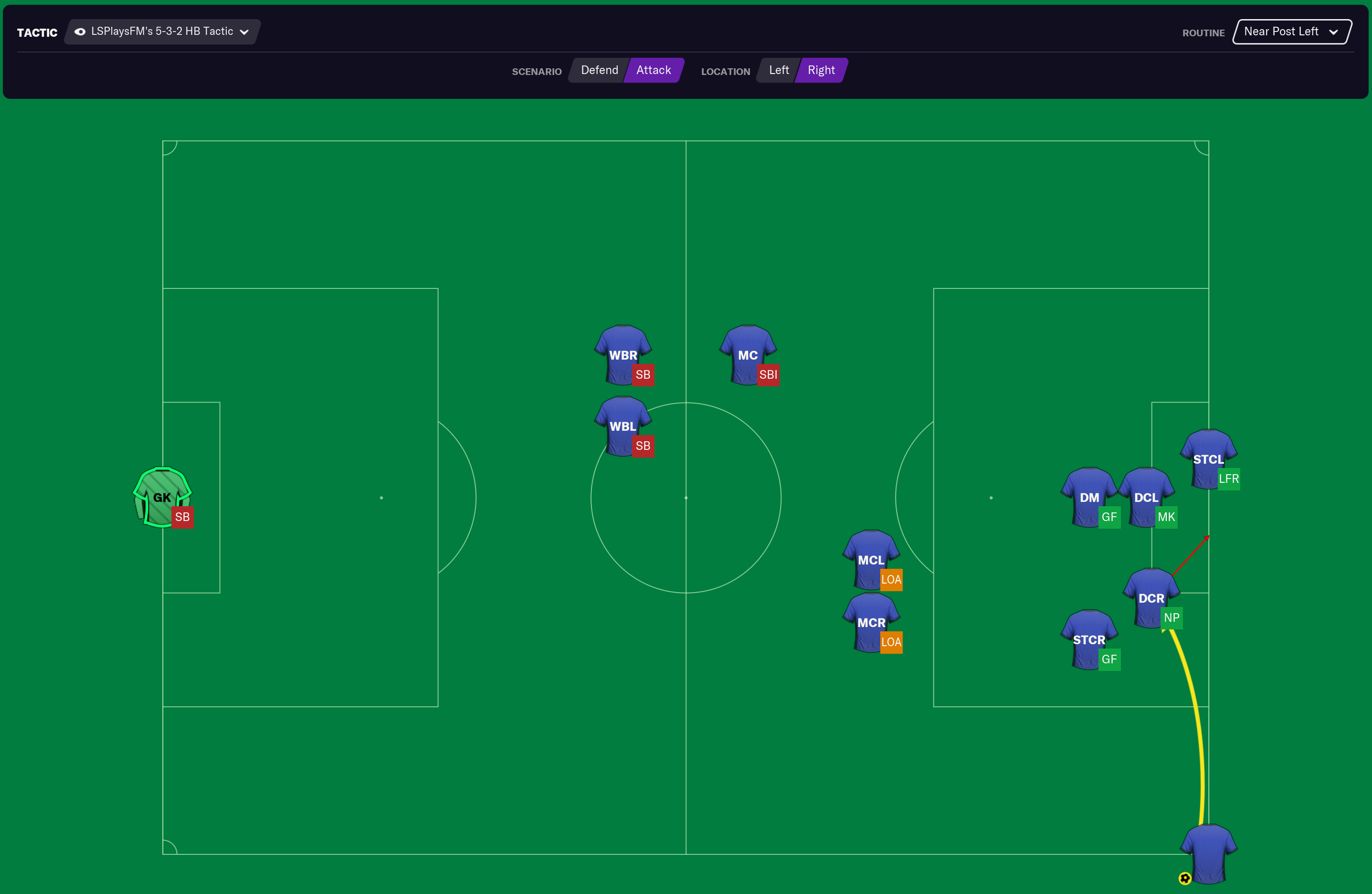 Just so you are aware with other Set Pieces these are set to default options as I found they worked well for my sides, but if you want to adapt them then feel free and you may find this allows you to score even more goals.

In terms of player instructions the majority are all the standard instructions set by the roles in Football Manager. The only players which have had their's changed are the CBs who have both been told to Stay Wider. The reason for this is it allows the Half Back to then drop in between the CBs without them being too close to one another.

The side tested using this tactic was Chelsea. The side performed simply amazing, securing a treble with a win in the Champions League, Premier League and EFL Cup and on top of that it wasn’t just the team performances which were fantastic, but the individual ones too. Timo Werner excelled in this tactic as the Advanced Forward for Chelsea scoring 49 goals in all comps and getting 13 assists. Then Tammy Abraham too scored 32 in all comps as the DLF and also managed 13 assists as well! A phenomenal showing from Chelsea going forward, but it was also defensively they were very strong with the best defence in the Prem, as well as the best attack and managing a massive 100 points in the league too! Overall, the team simply dominated the Prem and every other competition they were in eventually securing a European treble.

You can see below exactly how the team did in their competitions below as well as Werner’s stats too: 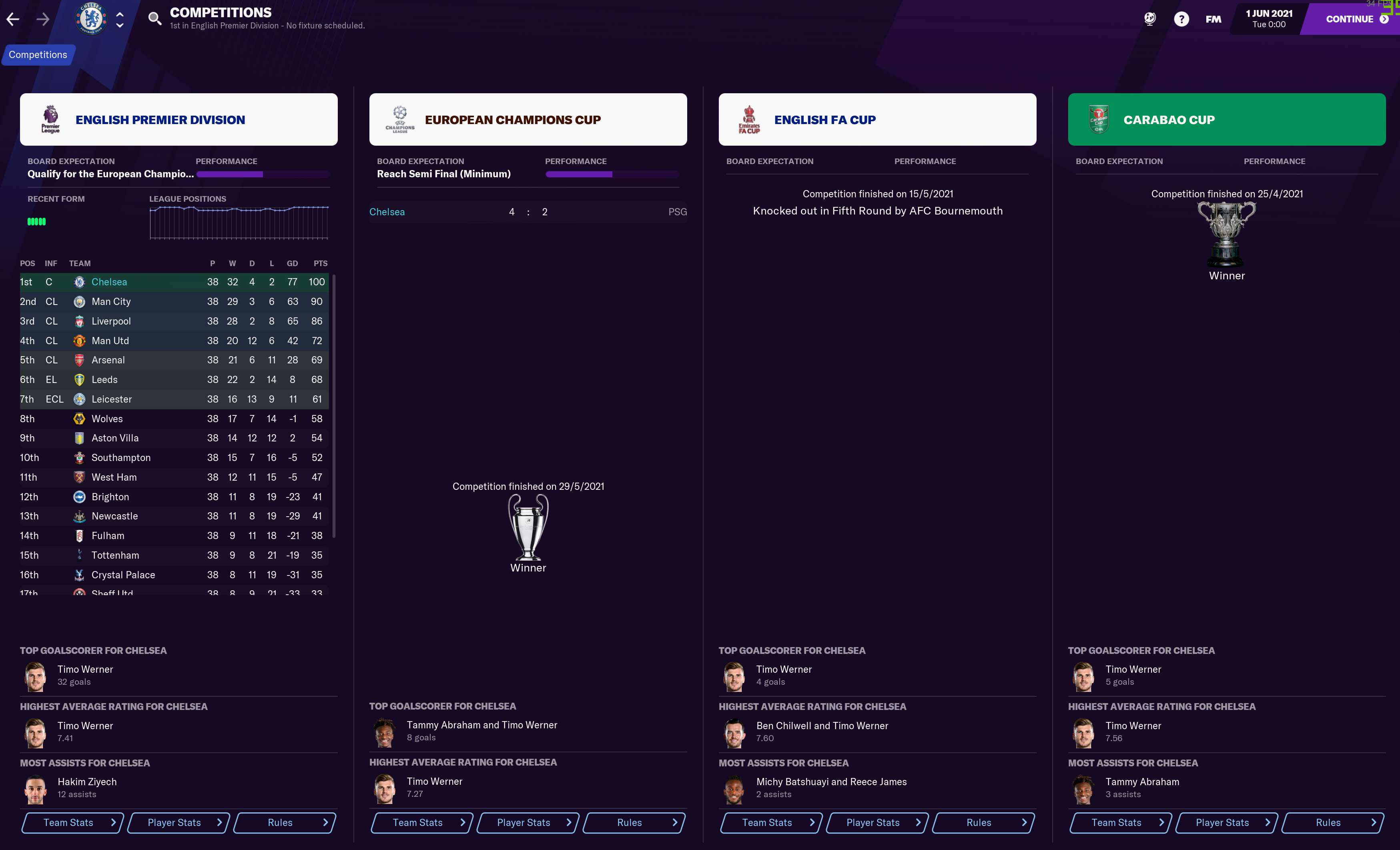 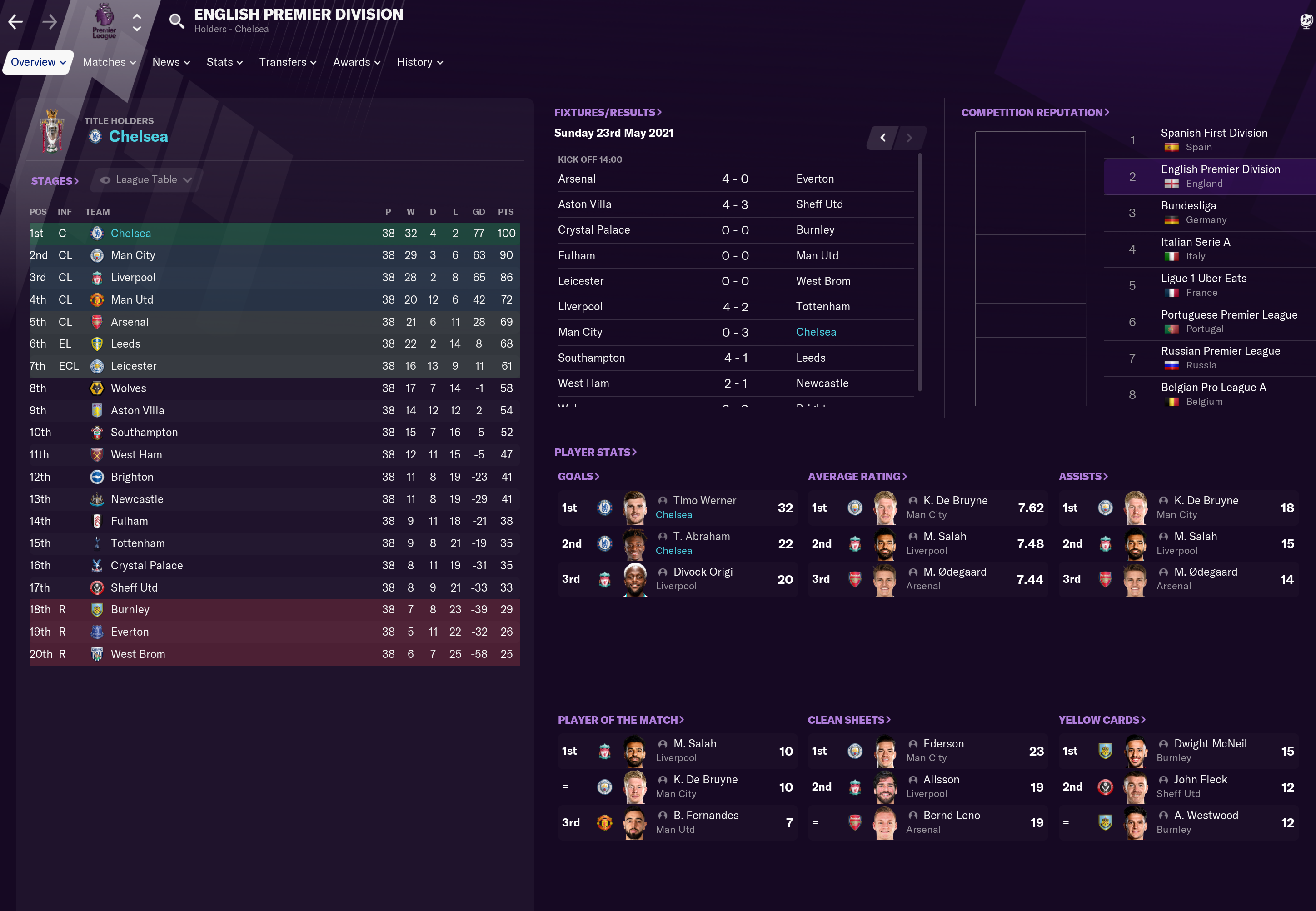 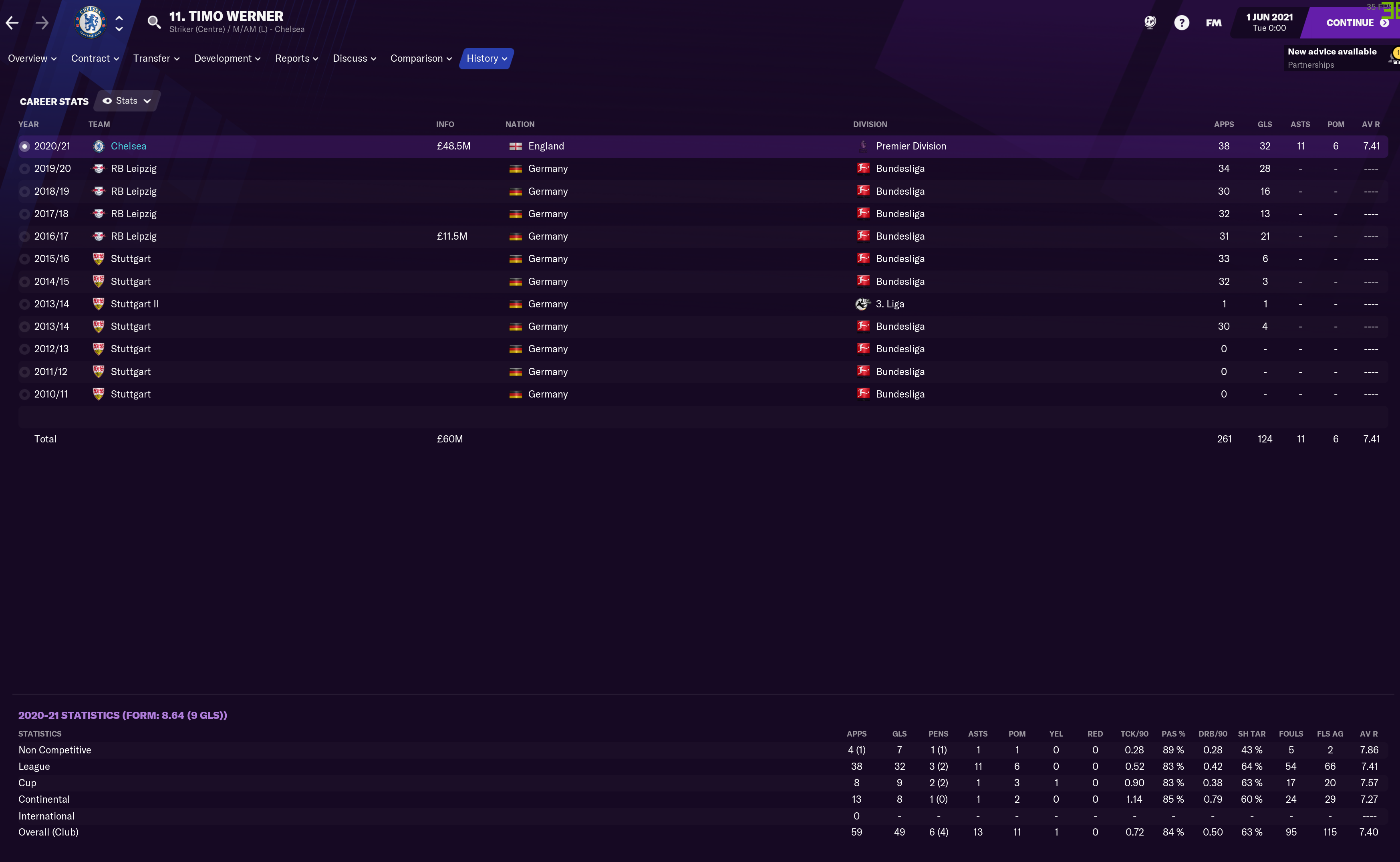 Below you'll find the analyst stats for Chelsea in the Prem so far this season, they are by far the best offensively in terms of conversion rate & shots on goal and one of the most impressive defensively too again in terms of preventing shots on goal clearly showing the tactic does well in taking chances and preventing them too. 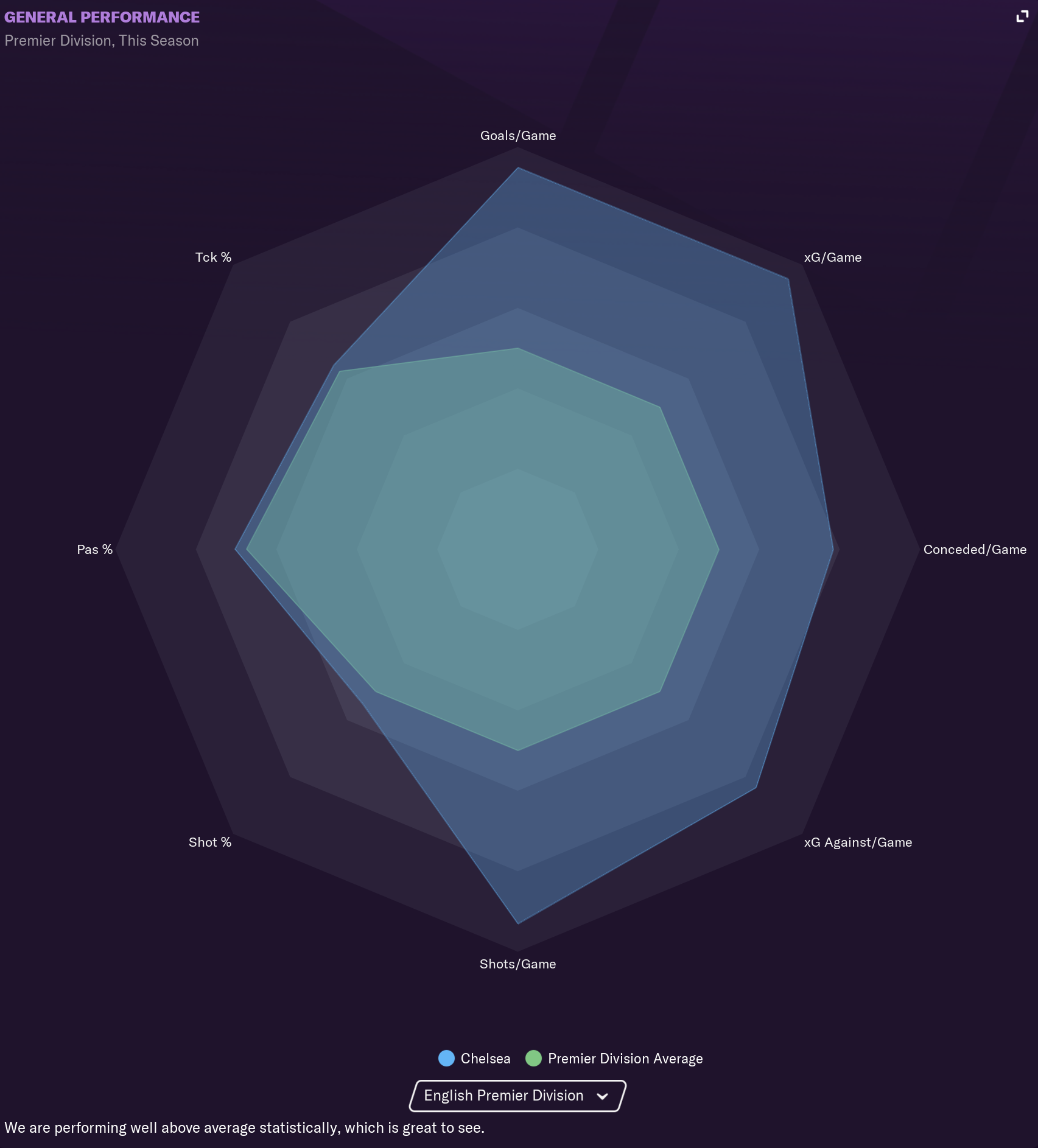 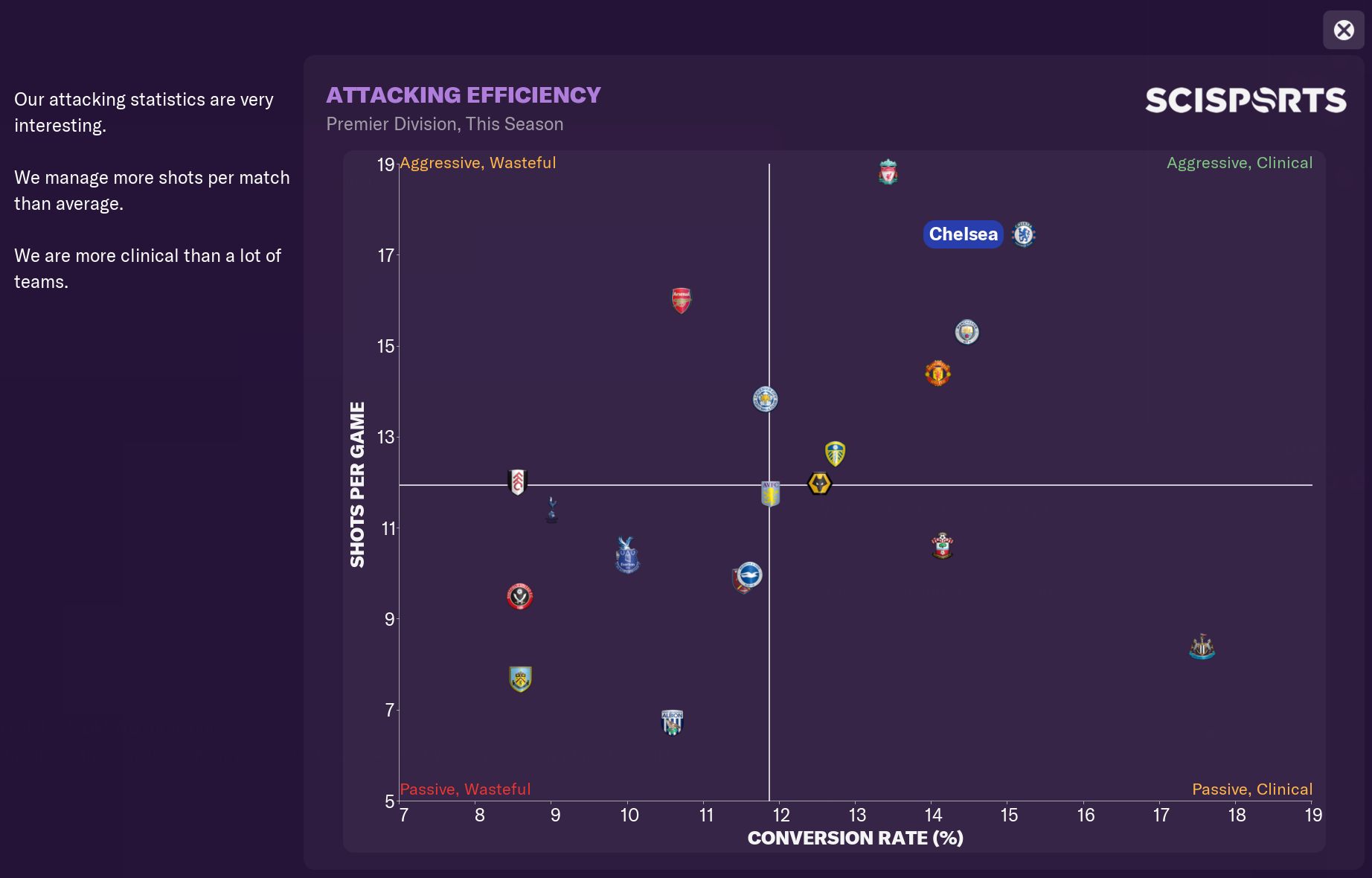 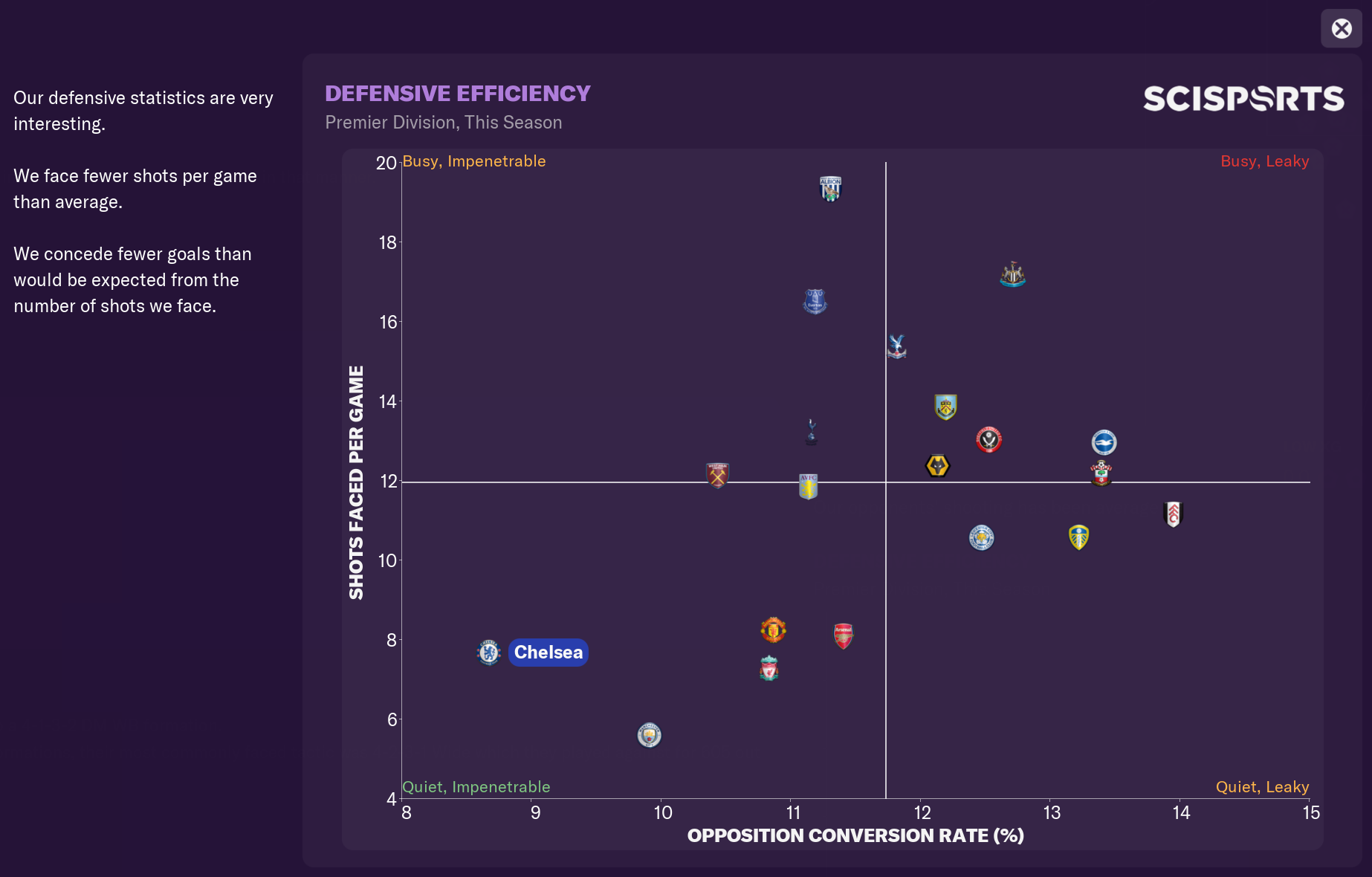 After the success with Chelsea, we move onto Wolves. I really wanted to test a side of Wolves’ ability so we could get a test at a different level of team. We of course do also have Brighton to look over as well but we’ll come to them last of all. You can see how Wolves mainly lined up below: 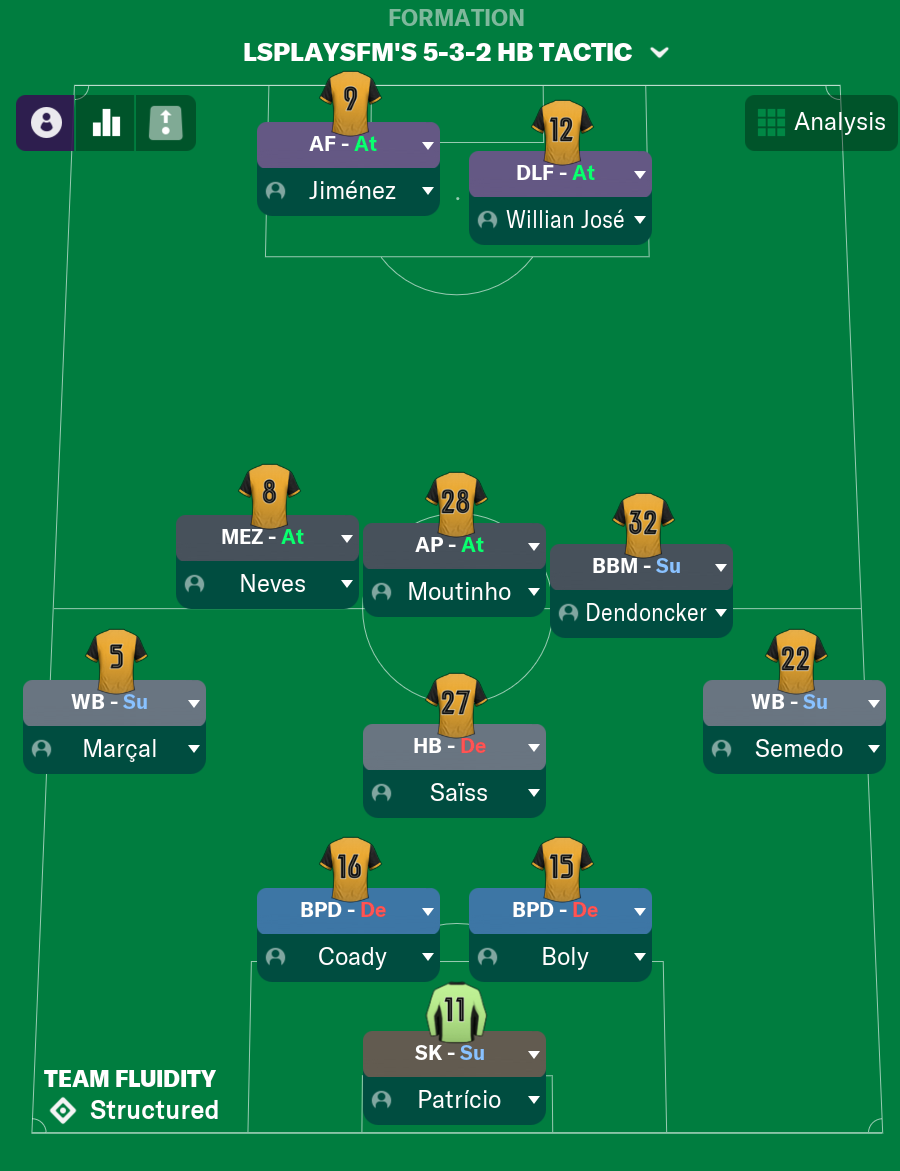 Wolves were predicted 8th, yet the team finished far higher than expected in the top 4, joint on points with Man City behind them on goal difference earning 74 points overall. On top of that the team also had a very good showing in the League Cup reaching the semi-finals losing out to Man City here as well. Much like Chelsea, Wolves too had some real standout performers, Raul Jimenez especially as the AF winning the Premier League Golden Boot award scoring 29 goals in all competitions and Joao Moutinho having the most assists in the Premier League from Central Midfield. You can see quite how Wolves got on in their competitions and the League below: 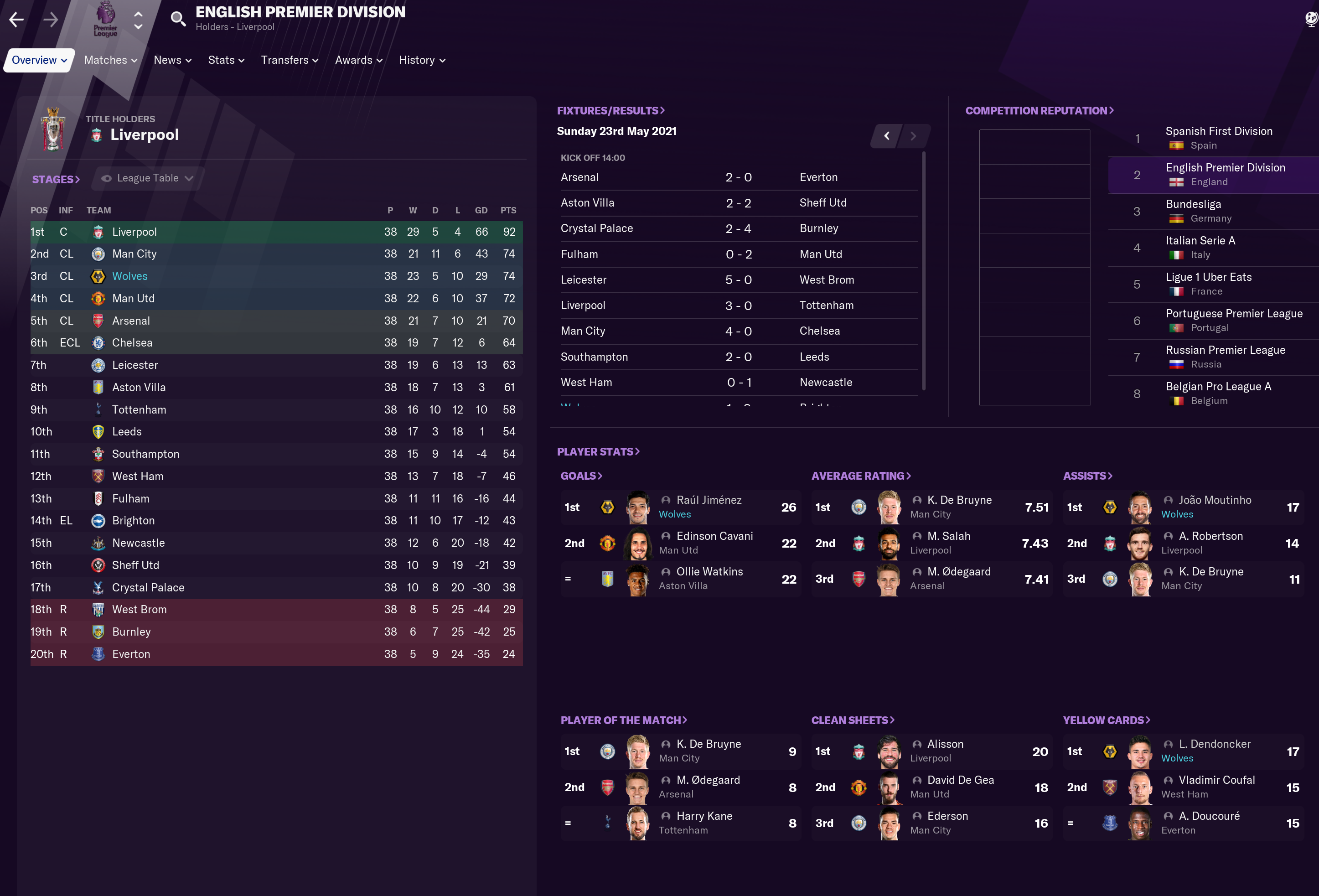 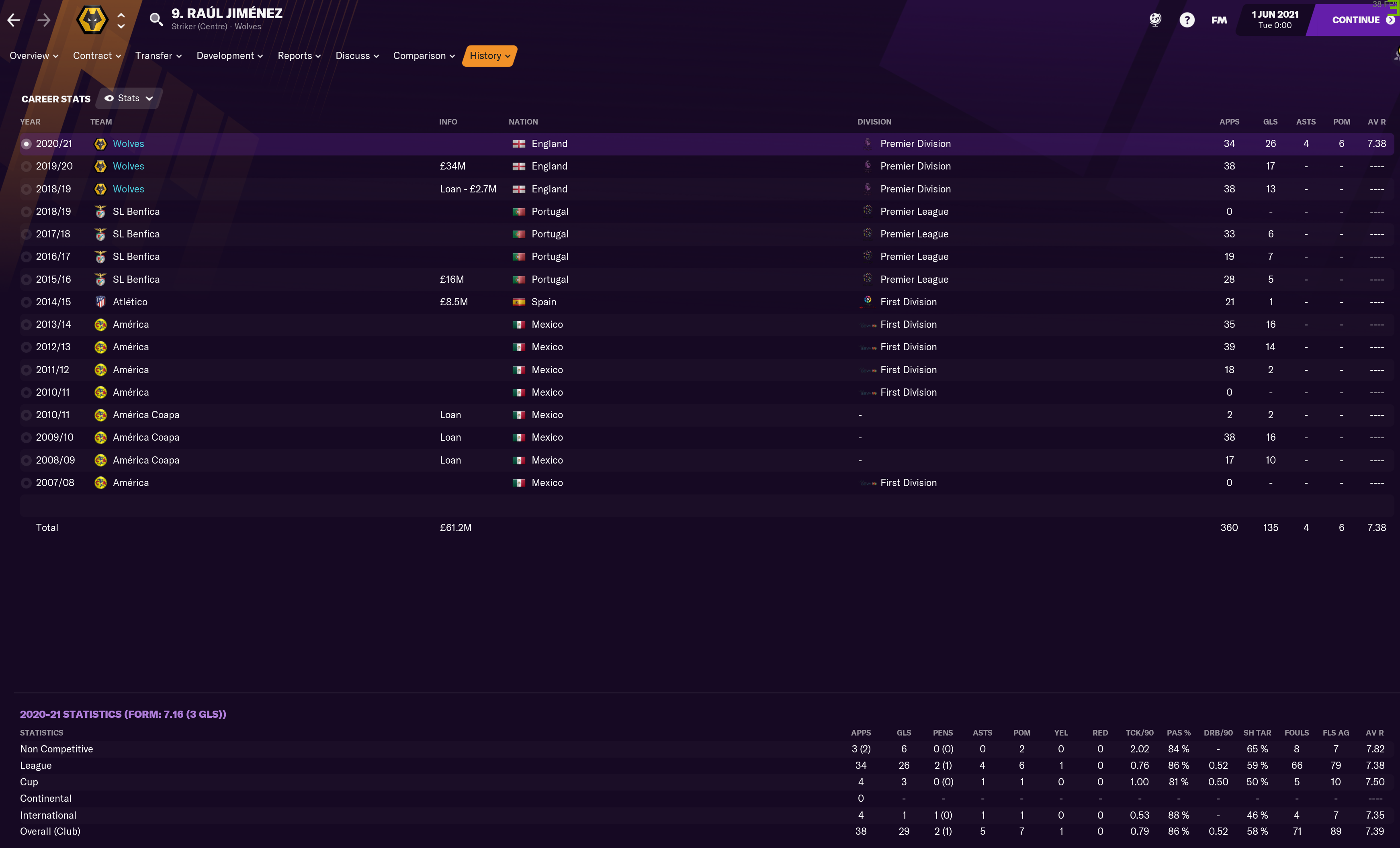 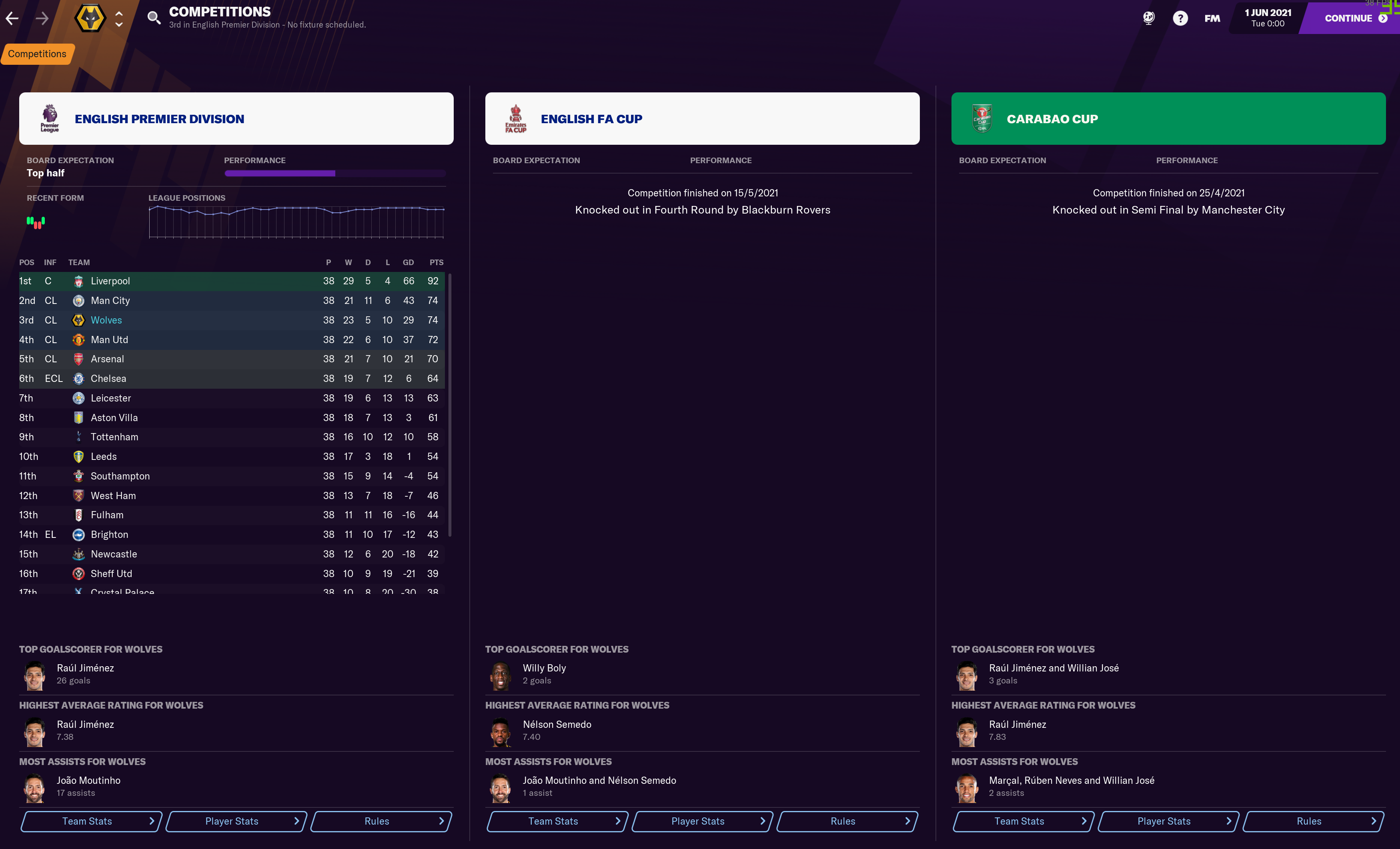 We come to the final team in our simulations now with Brighton. Very much a bottom half team and a real relegation candidate predicted to finish 14th at 450-1 odds. Them being so poorly rated was a big reason why I wanted to test them so we could see how a poorer side could fare with this tactic. Brighton’s side would line up something along these lines when using the tactic. 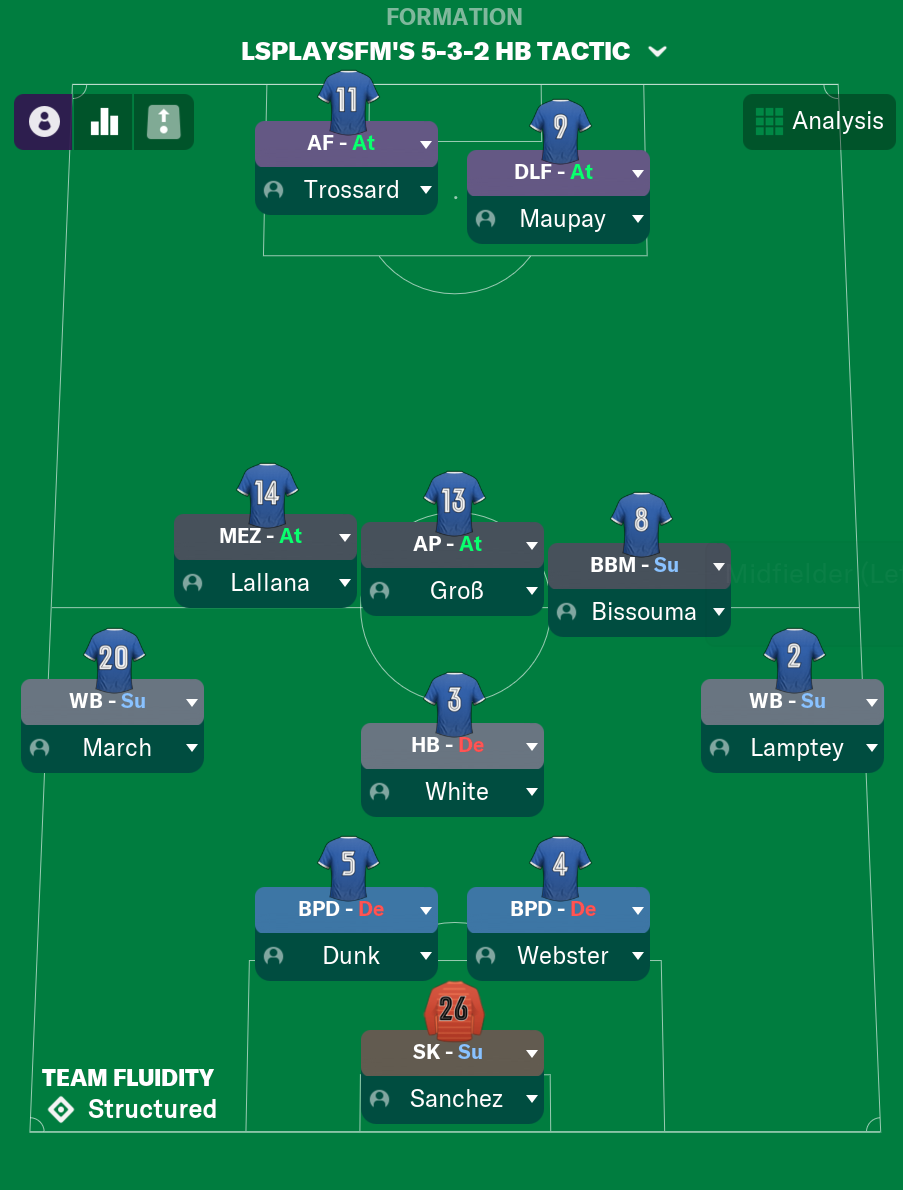 With this tactic, they smashed it in the Prem, finishing in 6th. They managed a whopping 68 points in the Prem, only 5 off of the top 4! On top of this as well they were also runners up in the League Cup, reaching the final at Wembley and getting so close to silverware this season. Also Leandro Trossard who was used by Brighton as their AF had a very decent year scoring 25 in all comps which for a makeshift striker is very decent indeed! You can see exactly how the side got on below: 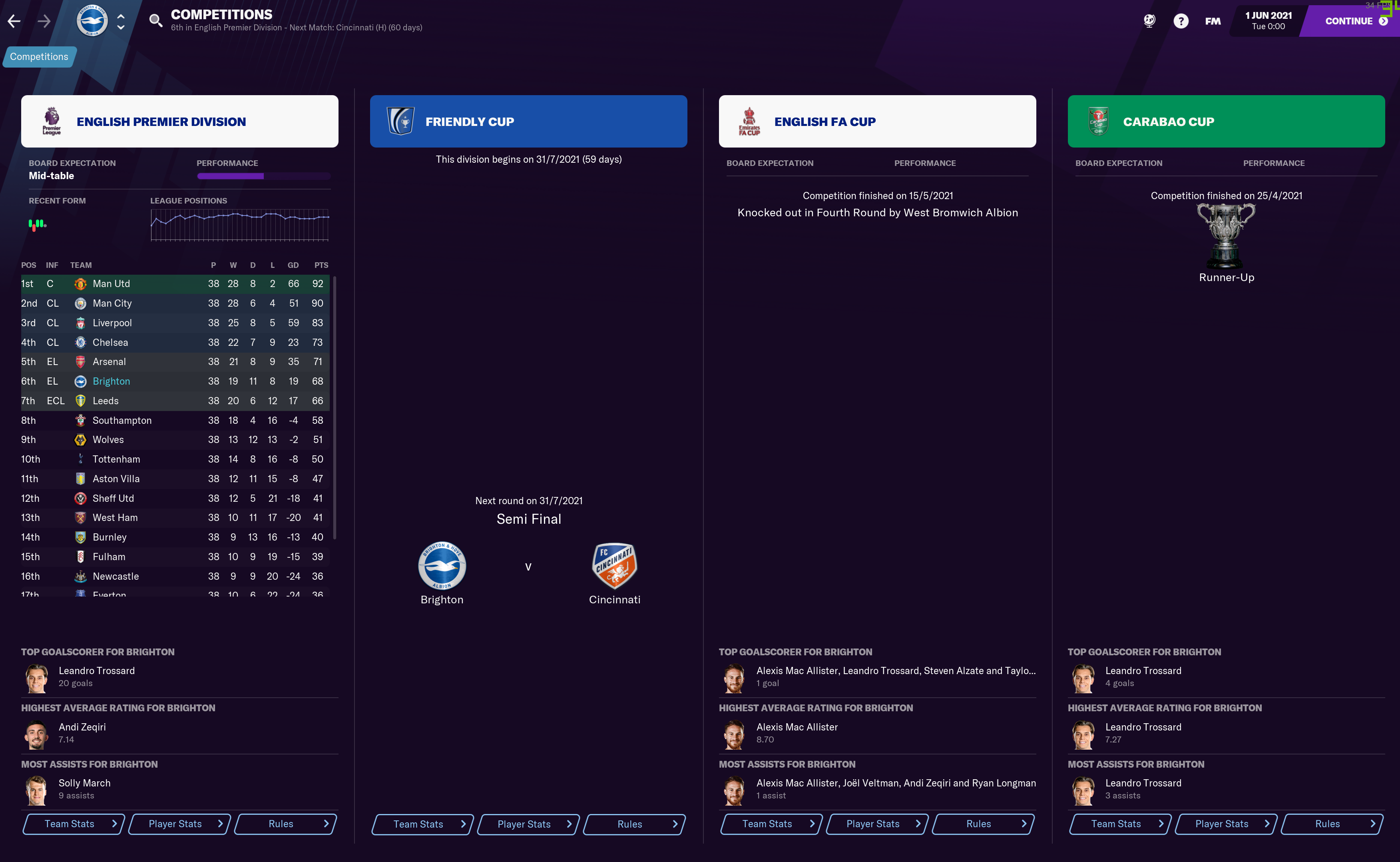 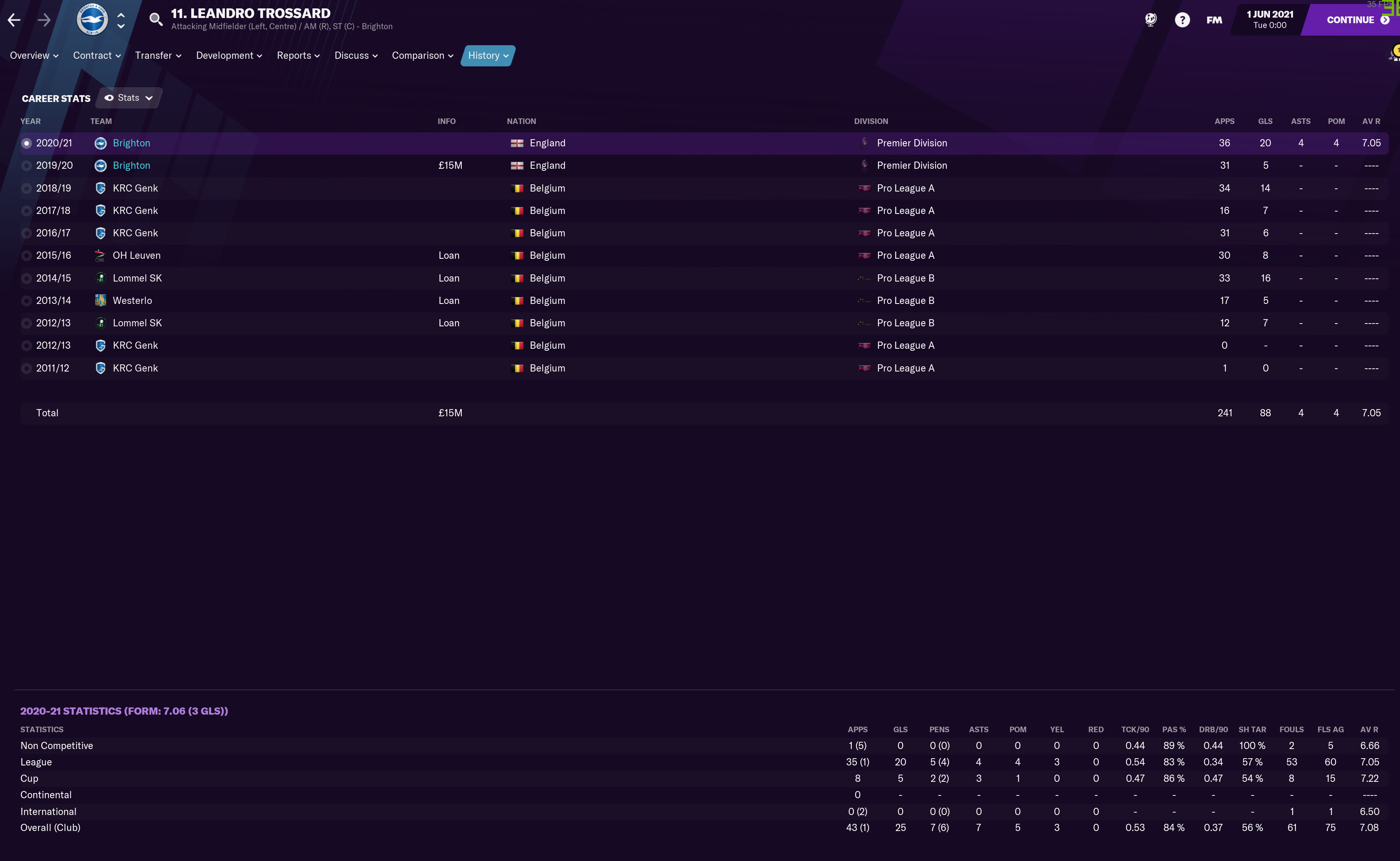 Much like with any of my tactics, I always encourage others who have used the tactic to let me know how they've gotten on with it and to send me any screenshots of their results. One such user who has been playing as AC Milan had a very successful season using the Half Back Tactic winning a domestic double in season 1 (despite making no signings) and also reached the Europa League final losing only on penalties!

The team had a great season, getting 88 points beating Juve by the 1 point gap and also defeating Juve in the Italian Cup final as well. Overall a very successful season with also Donnarumma running away with the most clean sheets in the season of 23. You can check out the screenshots below: 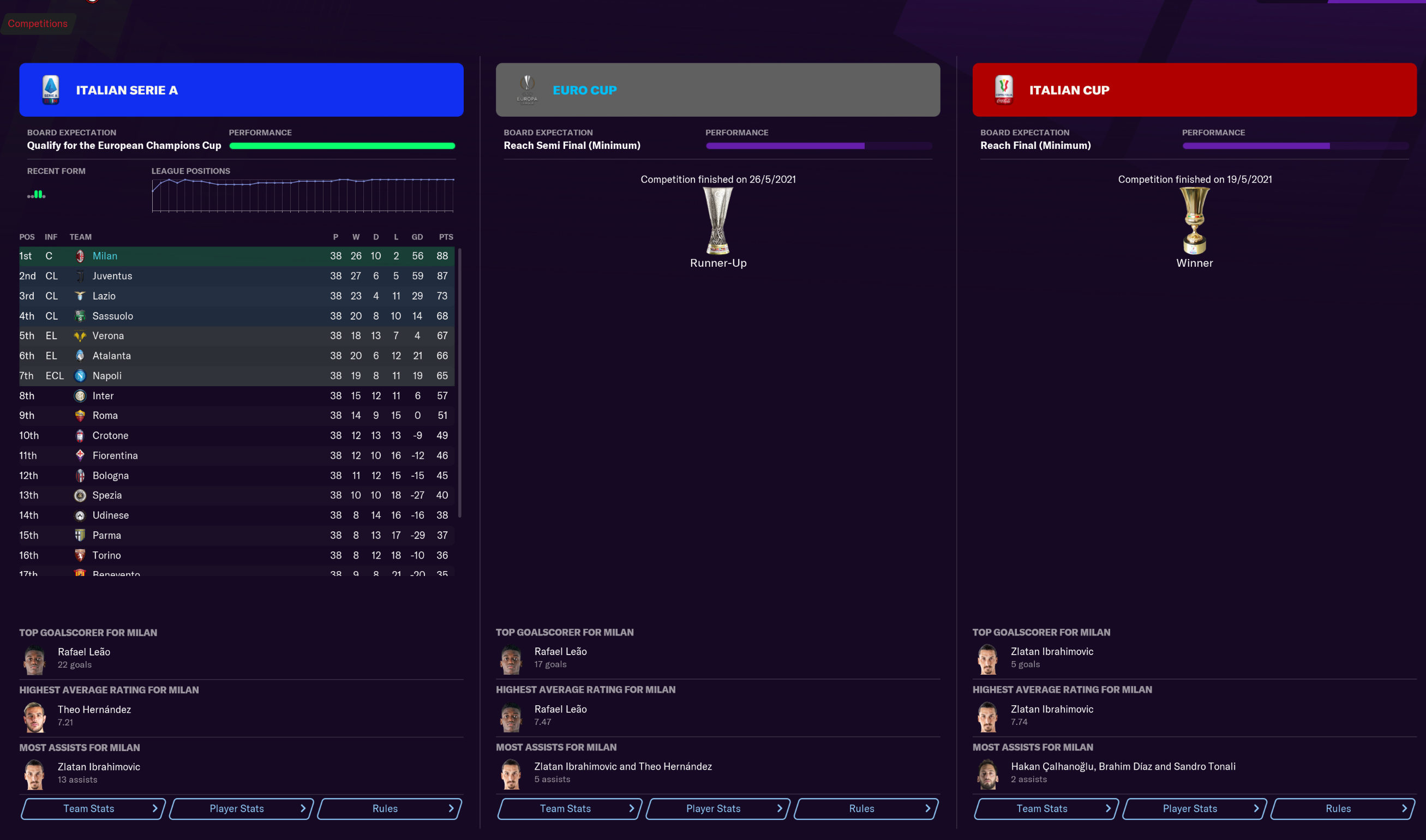 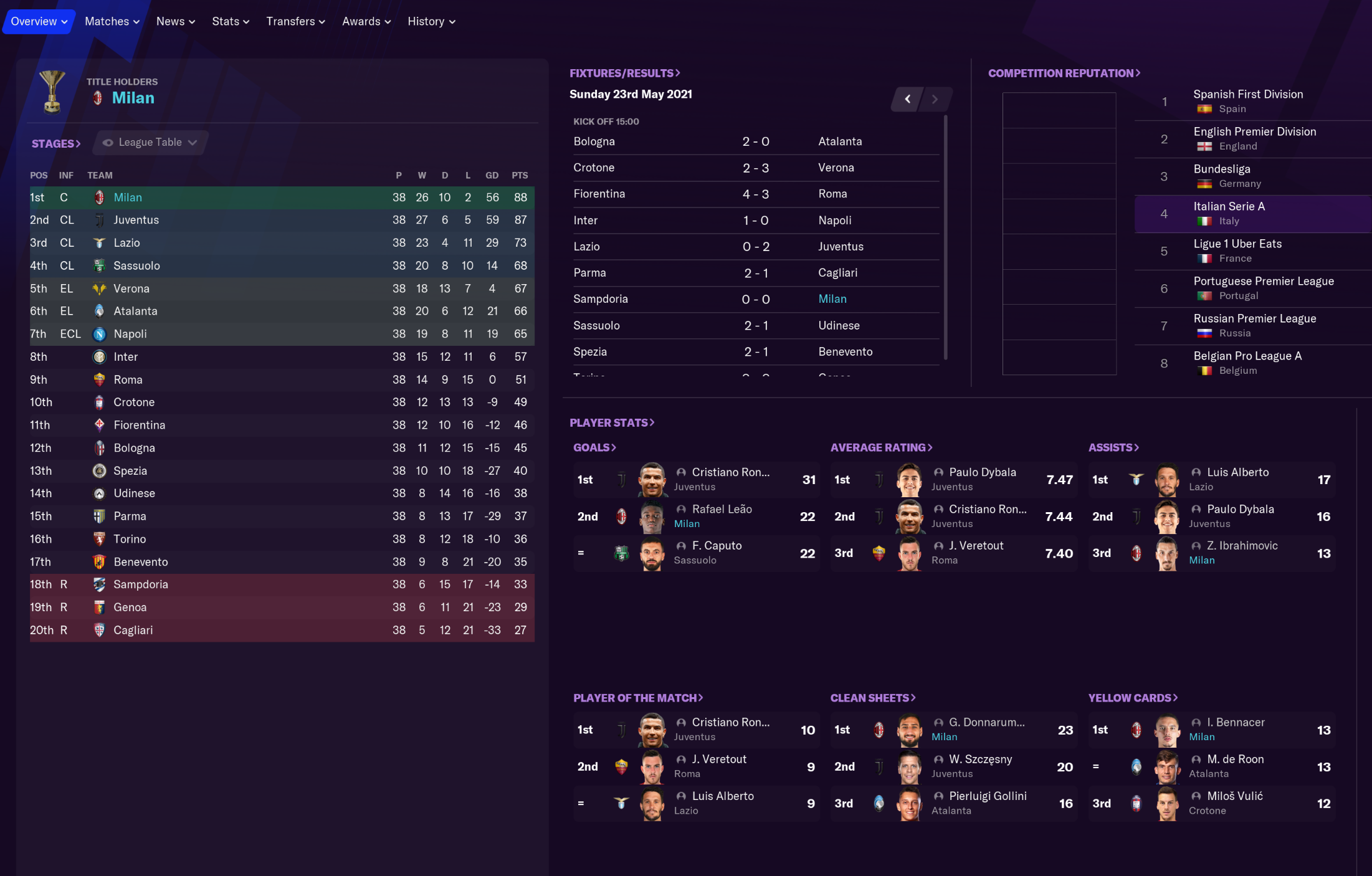 Overall that is how the tactic performed in these tests.

You can also find me over on Twitch where we are about to begin a new Journeyman save in Europe as well. The link for the channel is below, why not come on over and drop a follow on the channel.