Hello Everyone, MrSpaceman reporting for duty!
If you like a tactic that lets you go unbeaten in a smaller European League and at the same time win the Quadruple of the German League, German Cup, Super Cup and CHAMPIONS LEAGUE!!!, then this is for you.

To help explain the tactic and show how well it worked, I created a tactics video over on my YouTube channel called MrSpaceman!
You can find the video below:


People have been asking about the tactic that I was using in my Partizan to Glory save and here we are! If you have been keeping up to date with this series, you would know that this tactic which I called “The WaveBreaker” tactic, has managed to secure us an unbeaten season in the Serbian Super League, the Serbian Cup and a semi-final finish in Europa League 2. Not bad at all. The WaveBreaker allowed to reach the perfect balance of a strong defence and strong attack allowing us to finish the league with 70 goals scored and 14 conceded. 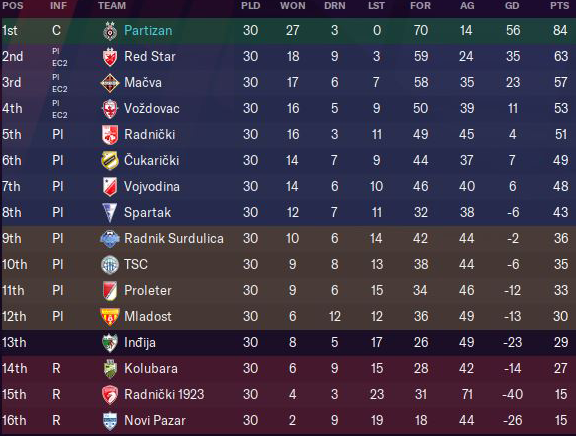 The WaveBreaker is a more defensive version of the 4-3-3 that allows the front 3 the freedom to do whatever they want upfront. The back 4 keeps it simple with the Fullbacks being on support, and one of the centre backs with better passing having the role of Ball playing defender. Moving up field we have two defensive midfielders of which only one is truly defensive. The anchor will hold down the fort, giving the Segundo Volante the license to roam up field, carrying the ball, creating chances, and shooting on goal. I really like the Segundo volante as they help break down the opposition defence with late runs causing an overload in the final third but at the same time, they sit deep enough that the team is protected during central transitions. They help connect the defensive line to the front three bringing the ball either to the advanced playmaker ahead of him or directly to the wings. This is probably one of my favourite roles in Football Manager as it is such a useful role when utilised correctly and it reminds me of my all-time favourite player Frank Lampard.
Finally, the two Inverted Wingers are both the creative and scoring outlet of the team which work together with the Centre Forward (who can be either a Complete Forward or Advanced Forward). This tactic can be played with attacking mentality to help break down smaller teams that defend deep with a low block or positive mentality against the rest. I have had great results with switching to a positive mentality in this Partizan to Glory save as it allowed me to draw and beat Monaco in the group stage of the Europa League 2 and completely shut out Red Star Belgrade in our games against them.

In possession we attack fairly wide by playing the ball out of defence with short passes at a higher tempo. The players are instructed to run at defence and be more expressive, which allows my advanced play maker, secondo volante, two inside wingers and my centre forward to take the ball directly at the opposition thus not giving them time to form a low block.

We transition by counterpressing when we lose the ball and instantly countering once we do. The goalkeeper is tasked with making sure we start the attack well by rolling it short to our Ball playing defender.

Finally, out of possession, we can press very high both with our defensive line and our line of engagement since we have the extra protection in the midfield with 2 defensive midfielders. This overwhelms the attack, leaving only one option: hitting the ball forward. 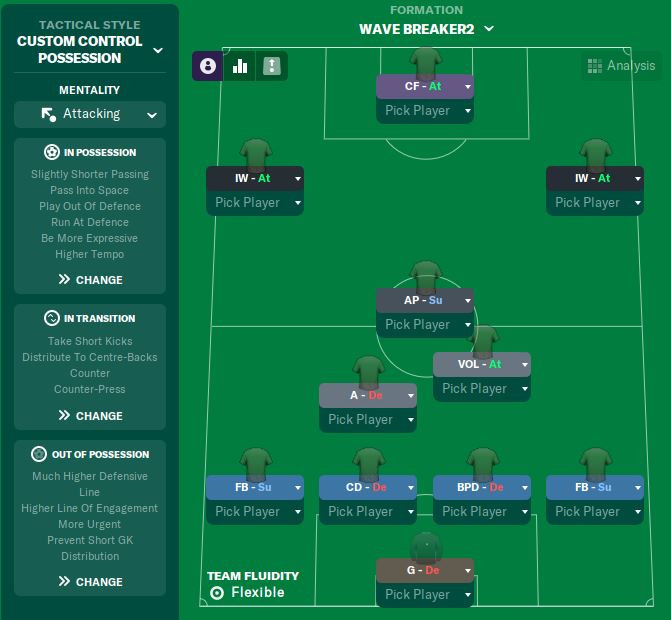 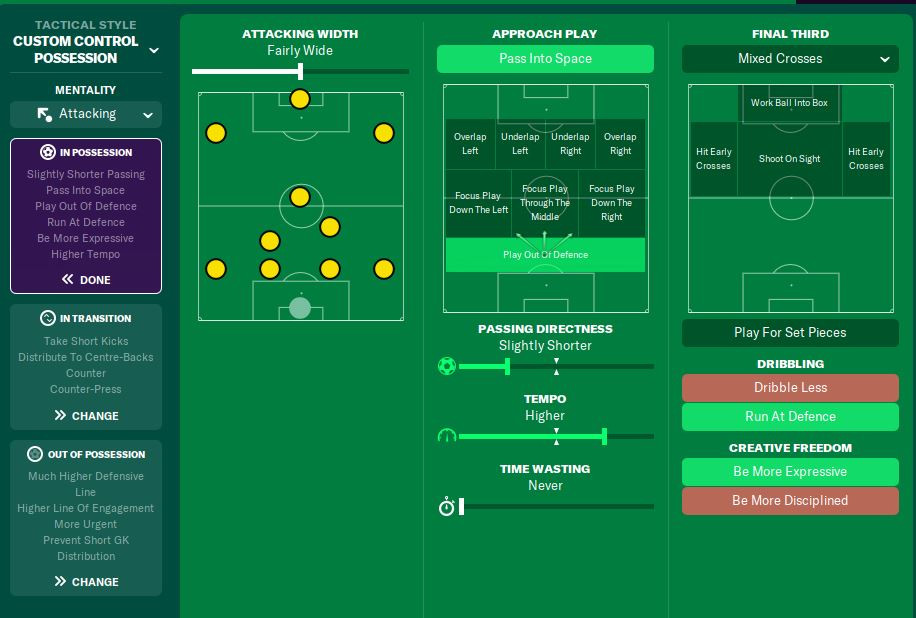 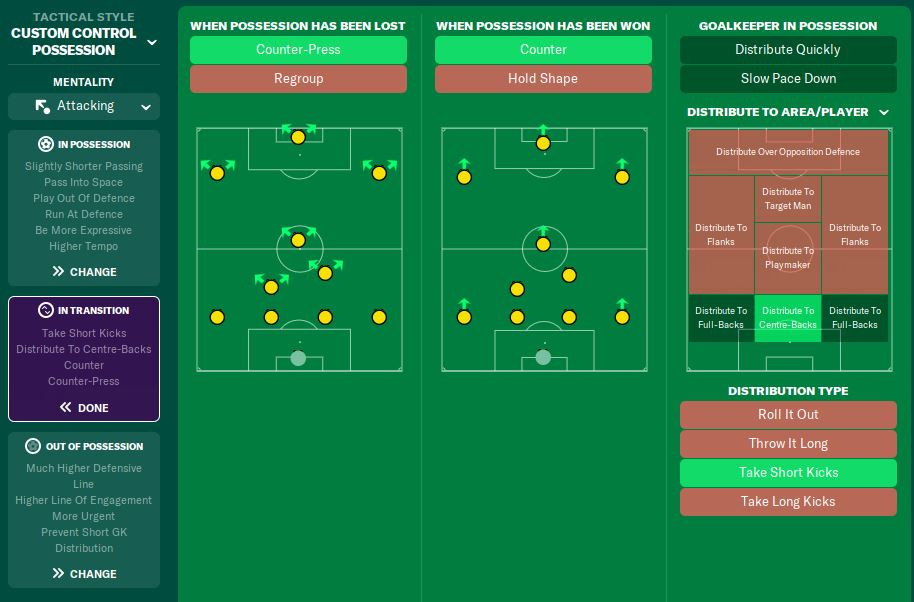 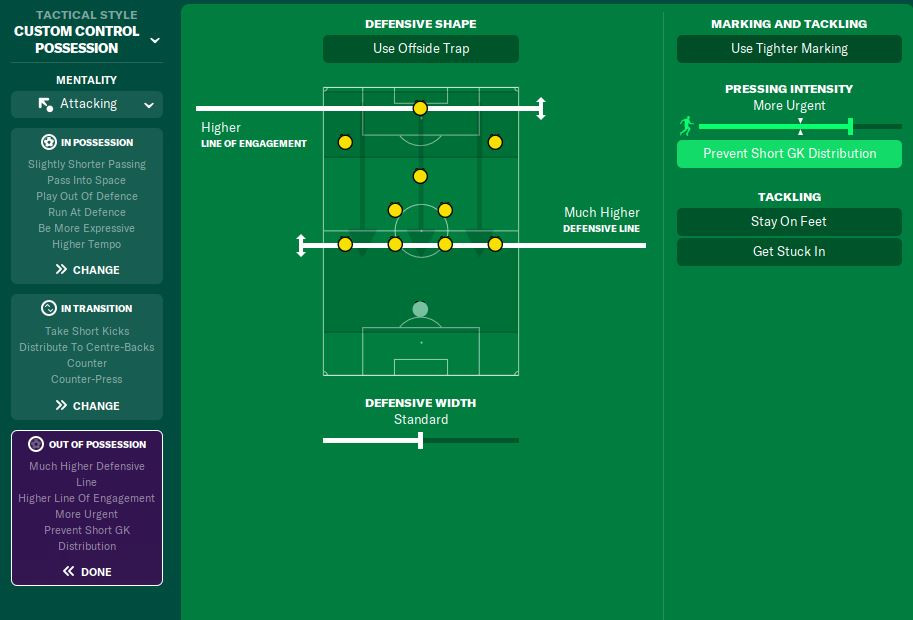 Utilising the WaveBreaker we won The Bundesliga, the German Cup, the Super Cup and the CHAMPIONS LEAGUE! See! I told you it worked against harder competitions. Haaland has scored 53 goals in all competitions with 16 of those being in the Champions League! We scored 127 goals in all competitions which is quite a feat! The Bundesliga was tough this year as we’ve managed to just beat Bayern by 2 points, but it wasn’t just a two-horse race. The difference between 1st and 4th was only 6 points, so the competition remained difficult throughout! The German cup was relatively easy as Bayern managed to self-destruct their chances versus Augsburg early on, so we beat Wolfsburg in the final 3-0! In the Champions League, group D was arguably one of the toughest groups which we managed to go through comfortably by winning all the games. In the first knockout round we annihilated Juve with a 7-1 score on aggregate, Leipzig 6-0 in the Quarters, Bayern Munich 4-0 in the second game in the Semis and finally it all culminated in a penalty shootout against City which we won! Granted, we kind off FMed them, but we were clinical with our chances whilst they were not. 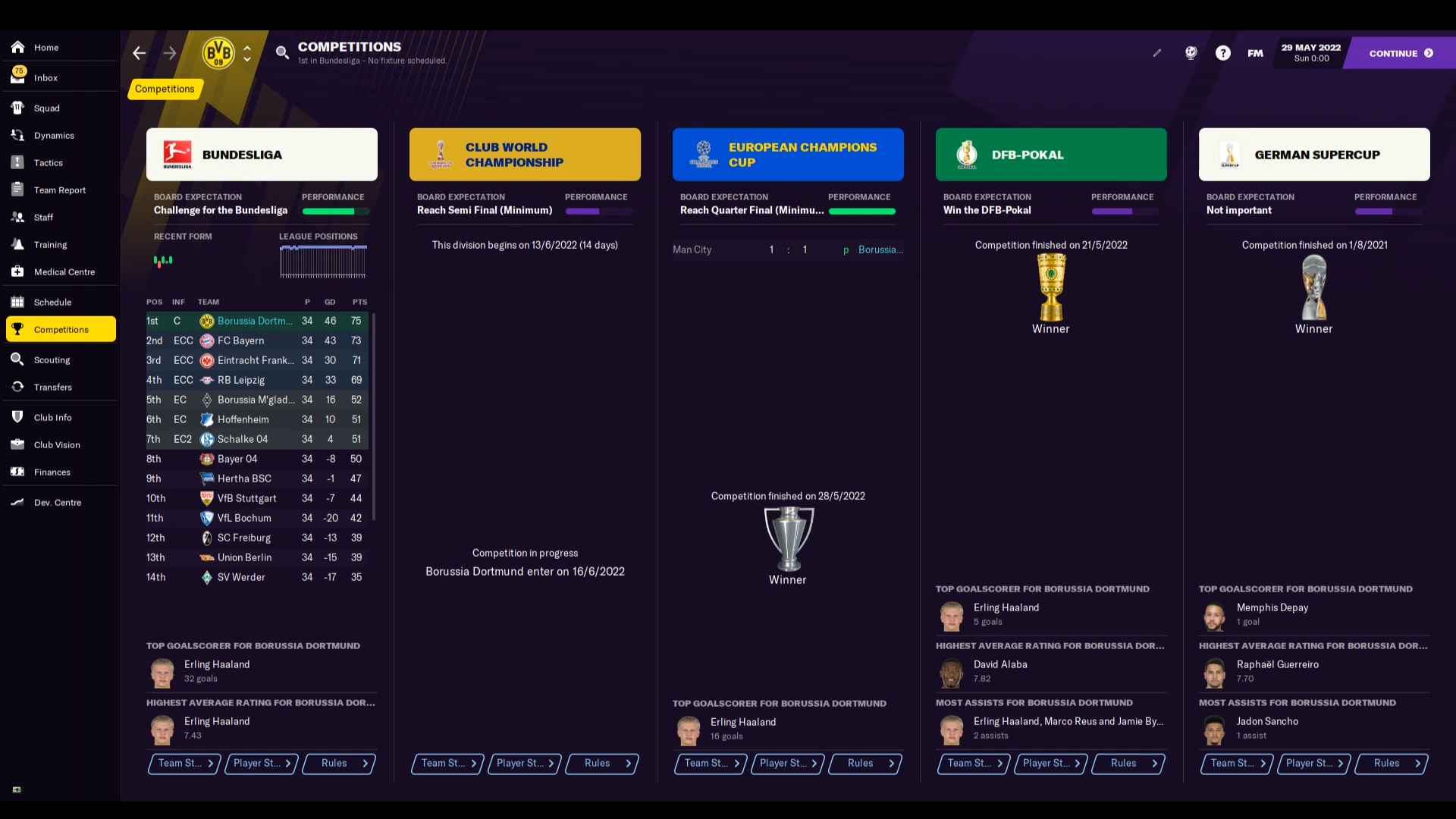 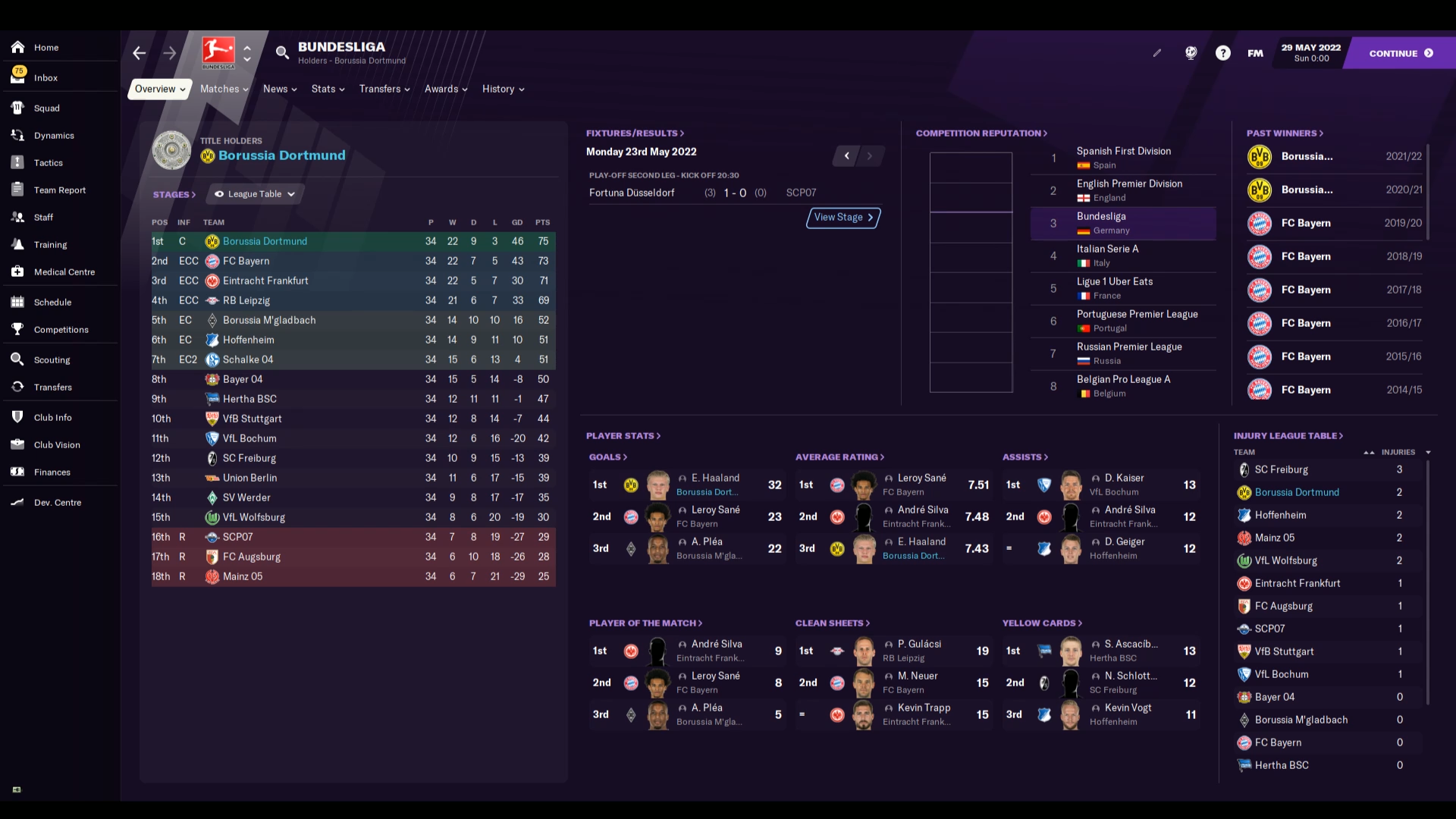 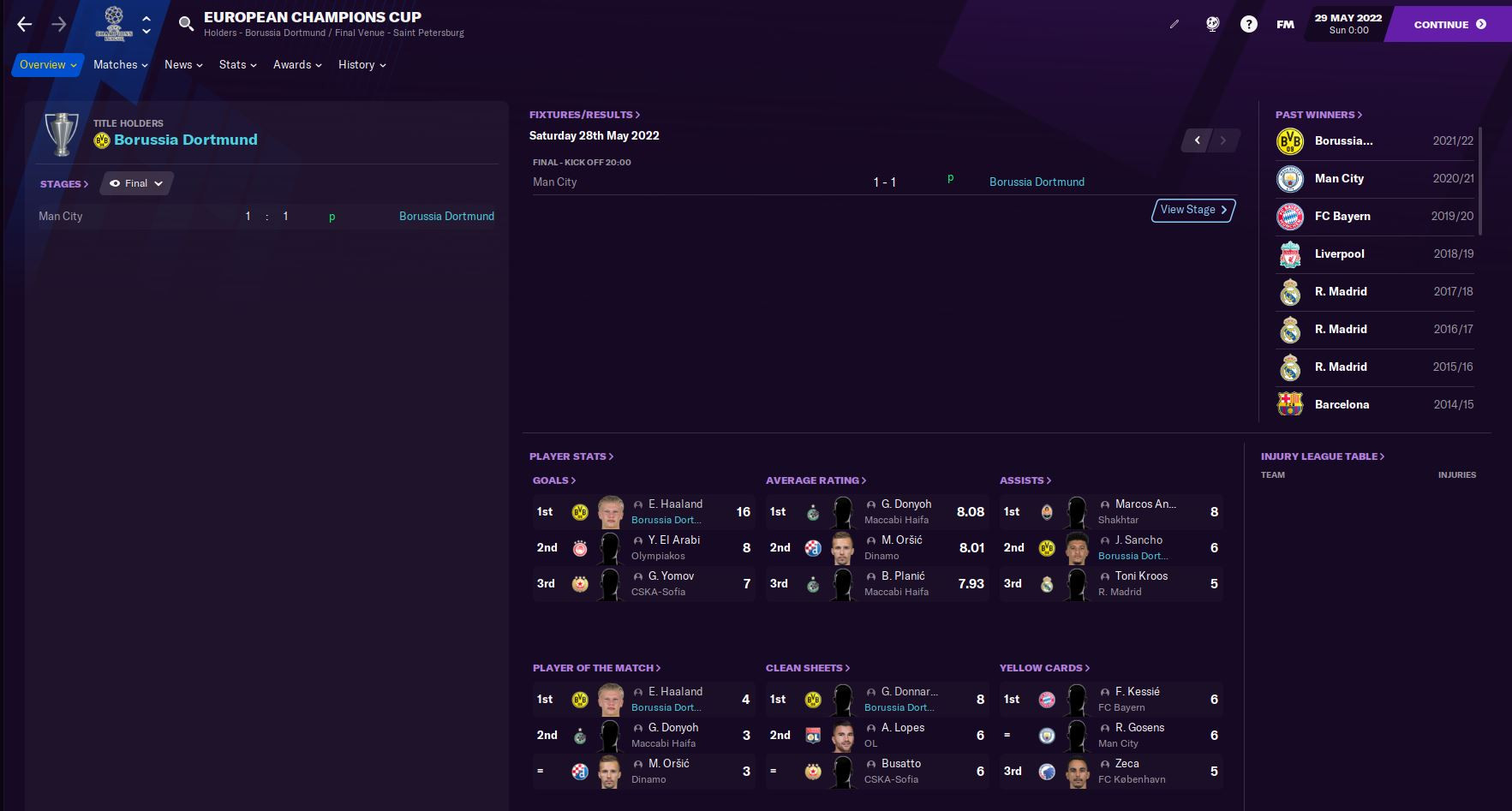 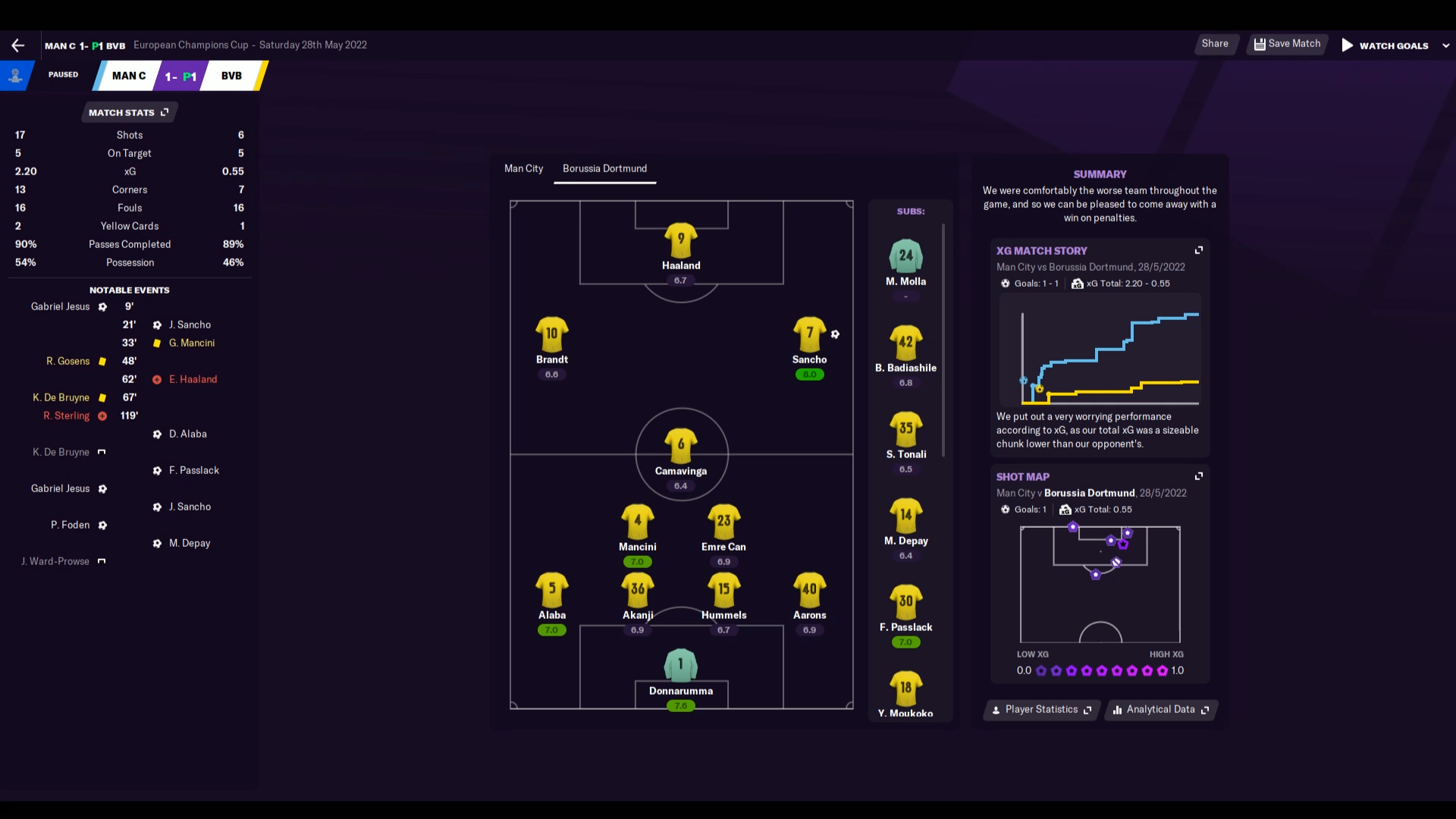 In conclusion, this tactic works well for small and big teams hoping to add extra stability to their midfield/defence whilst allowing to break down strong or deep defences with a combination of Segundo volante and the front three! If you want to concede less, score more, win Quadruples, then this tactic is for you!


I hope you enjoy this tactic and don’t be afraid to experiment with it! 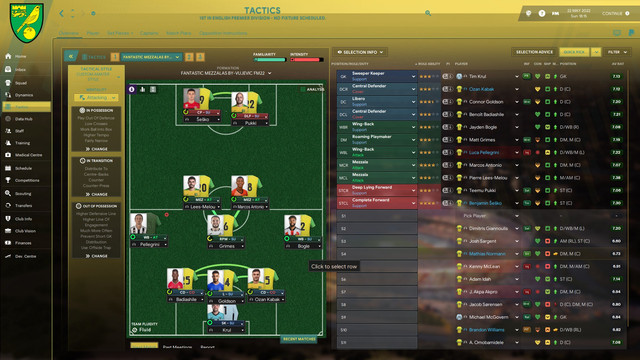