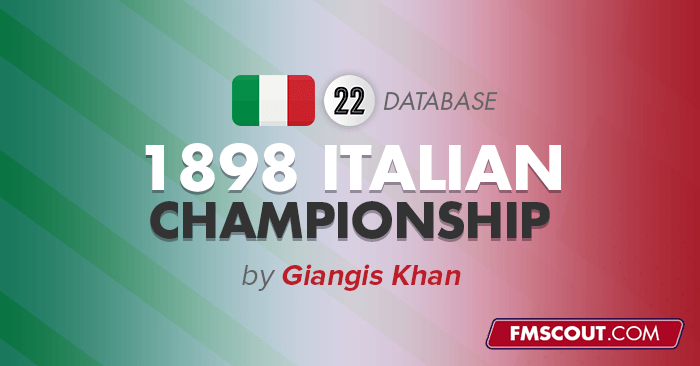 these are a series of databases that starts from the first absolute season of the Italian championship, Obviously given the few teams and the absence of continental cups these are databases designed for very fast careers, in detail:


The structure is like the real one, ie semi-finals and final
https://ibb.co/WgRMjQg


The squads and the players are as accurate as possible, but unfortunately not even Wikipedia can work miracles
https://ibb.co/k8rM81J

The structure is similar to the real one, the only thing that has changed compared to the real one is the first round, because in reality Liguria retired before the start, making Genoa qualify directly for the final.
https://ibb.co/whXp941


As above for squads and players

For this championship I had to deviate from reality, because I could not set the phases as they really happened, namely:

Preliminary Lombarda:
Milan is the only member, qualified directly to the Semi-Final

Ligurian Preliminary Round:
two teams, one way, who won went to the final

Piedmontese preliminary round:
3 teams, single round trip, who won went to the semi-finals against Milan

For reasons of force majeure I had to do:

Championship with 6 teams:
two groups of three teams each, round trip

Playoffs for the title:
semi-final and final

Playoff for the title:
first Round:
2 team

As above for team and player

As happened in 1900, I had to change the structure.

In reality it was:

Ligurian eliminations:
Genoa and Andrea Doria who challenged each other in a serious round trip

Lombard elimination:
Mediolanum is the only participant since the reigning champions AC Milan qualified directly for the final

The final:
Winning semifinal vs Milan

Well despite numerous attempts I was unable to make these phases coexist so I opted for a simpler championship with 8 teams divided into two groups of 4, the best two will face each other in the playoffs for the title.

I managed to give it the realistic structure:

first round:
2 teams, the winner advances

second round:
2 teams, the winner advances

third round:
2 teams, the winner advances

shirts, names, roses and stadiums as realistic as possible (according to what reported by wikipedia, some teams do not have a stadium, such as Andrea Doria who trained in a gym, as the field was missing)

Regional Elimination:
4 teams, 2 games, the 2 winners pass the round

Semifinal:
2 teams, 1 match, the winner goes to the final

Stages:
Semifinal:
4 teams, 2 games, the winners go to the finals


Here is the 1905 championship.
As with other editions, I had to give some poetic license to the structure.

Which, however, remains very realistic in the First Category (in reality the preliminaries were regional and had no ranking).

While as regards the Second Category in reality there were no eliminations in Piedmont (Juventus II only entered), in Lombardy it was a triangular (Milan II, Sempione and Milanese II), in Liguria there was a round trip match between Genoa II and Andrea Doria II, while the final to decree the winner was a triangular between Juventus II, Milan II (winner in Lombardy) and Genoa II (winner in Liguria).


Here is the 1906 championship.
As has already happened, I had to take a poetic license for the structure of the championships, which still remains realistic.

In detail, the First Category changes only the structure of the matches (in reality they were regional, with home and away matches, without ranking) of the preliminary rounds, while the final round remains realistic.


Separate speech for the Second Category.

In reality they were 3 regional groups, with a triangular final.

He gave me the error constantly trying to replicate it, so I opted for 2 groups of 4 teams, with a final group of 2 teams.

Also added as an inactive series the Third Category.

Also added is the team released / retired, from which you can draw players if you train teams that have few


Gentlemen, here is the 1907 database.
Inside you will find teams, roses (reported by Wiki) and Italian championships played in 1907.
In reality, however:
In the First Category the matches were round trip, without ranking, with a triangular final
I opted for 3 groups of two teams each with a triangular finish

In the Second Category, the preliminary rounds were at the discretion of the regions, there were those who made triangles, some home and away matches
I opted for 3 groups, one of 4 and two 3 teams, with a triangular final

On the third Category there is no information on the net, so it is not even present as an inactive Championship.
However, the teams from the previous season are present to play the friendlies


This is the link to download (for the moment) the championship from 1898 to 1907. As I add vintages, I will update the link and add screenshots