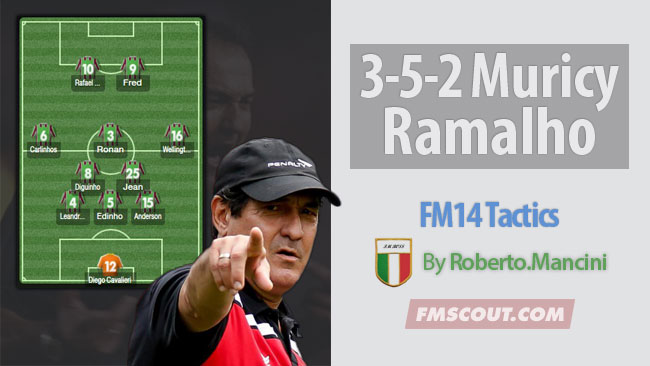 
"I am ten times a better player from the ones that you watch now playing. They don't play with heart, they walk, they look in the stands for sponsors, girlfriends. They just watch the time clock in order to finish the obligation. They don't love to play football, to sweat, to work on the pitch, they just make some silly fun like when they play for recreation in the park with friends. I say it again and I believe it, I am ten times a better player than all of these who play now in Brazilian Serie A. I am not a better athlete, but I am surely a spirited player much more determined, much more concentrated and passionate than these kids."


We're not talking here for a rich European ex footballer who makes a fortune as a player and now takes up his hobby in the touch line. We're not talking for a British manager like Fergie, for a fancy guy like Prandelli, or for a fake philosopher who was translator. We're talking about a person, a man who lives 24 hours per day for football because it is his biggest passion. He had another occupation, he had another job but his heart was beating for football.

But who is Muricy Ramalho?

Born in 30-11-55 in Sao Paulo from a modest/average family. He grew up playing football and was an avid supporter of FC Sao Paulo like his entire family. He played in all the youth ranks in the first team as well but because of dictatorship in Brazil, his salary was always nominal and almost zero. Due to inflation it was impossible to make any further bank saving apart than all in one consumption policy. He found his peaceful land in Puebla in Mexico where he played brilliant football as an attacking midfielder, but due to a disastrous injury he finished up his career in the age of 30.

Then he started to make a new job in order to survive. He has working as a construction worker and he opened up some time later his own mini market to sell domestic food products. His construction company was going better, his reputation as a technician was growing but his small business fell apart leaving Muricy in debt. That practically meant that he lost all of his income due to debts and high inflation as well. Right after these adventures, in 1993 he started up his coaching career from Puebla with mixed results.

Later on the president of SPFC Juvenal Juvencio hired him as he knew him personally as a player and he was appreciating his skills and his fiery personality. He took over the youth teams and shortly after he moved into the first team as a coach. Muricy after 2 months changed a role as youth coach into a first team manager. Touch of lady luck? Nobody knows. The rumours say that Juvencio wanted a cheap coach who will work with an average roster and at the same time, the club will "pay" his services while he was a player. Dictatorship had blocked many clubs from "paying salaries" to young players and Muricy was among them.

His coaching career was quite succesfull in the beggining by claiming COPA CONMEBOL in 94 and in 96. Later on Muricy slipped towards various teams, however he won something with almost every club that he managed. Then he returned back to Sao Paulo, exactly 10 years since he left the club by replacing the charlatan Pablo (as he prefers) Autori. His legacy started to become legendary. 3 consecutive Serie A titles, broken every kind of records, aggressiveness on the pitch, shouts in the dressing rooms, provocation in the referees, humiliation of his (then) arch rival Luxemburgo and then... Juvencio fired him because he overshadowed him.

Sao Paulo flirted with relegation trice since the departure of Muricy. Right after Sao Paulo, he had a spell from bitter rivals Palmeiras by beating Sao Paulo in the final of Paulistao. After Verdao, he moved to Fluminense and despite they were in the bottom, he managed to win his 4th Serie A tittle!!! He didn't stop there though, he moved into Santos another classical rival of SPFC. There he found out a nasty cat named Neymar Jr. He transformed this skinny teenager into the player that we admire now with Selecao and much less with FC Catalunya. He won the Libertadores with Santos that has to be won since the era of Pele!!!

Such a coach didnt pass unoticed from Teixeira President of Brazilian football federation. However both Santos and Fluminense didn't allow him to go because he had a contract. That's why Brazil conceded 7 goals from Germany. Ramalho is very well known for his astonishing tactical skills and maneuvers that makes during the matches. He can play 4-3-3, 4-4-2, 4-2-2-2, 3-5-2, 4-2-3-1 and sometimes he plays with a false 9. However the tactic which made him popular globally was the solid tactic of 3-5-2. This hard module gave him 4 Serie A titles, 3 of them consecutive in a fashioned manner. He uses this tactic now with SPFC only in derbies that's why he will lose this Serie A league title this season.

I present you a very tough, battling and commanding tactic which guarantees you top level organisation on the pitch, tight distance and lethal counter attacks. One of the most cynical and dynamic 3-5-2 ever. Maybe better than 3-5-2 of Conte in some cases. Make extensive fitness training, use versatile players who are not slow and then tight marking, hard tackling, showing up into weaker foot. This tactic is higly recommended for clubs which are aiming the title. Don't expect sweet passing game and smooth balls in the flanks. This tactic is made from men for men. 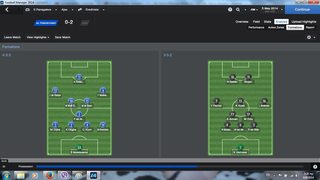 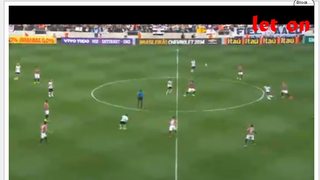 The photos speak for themselves. This tactic has been tested with many clubs under various circumstances.

Good luck to all of you and my deepest respect to FM Scout and to Stamatis Kritikos especially for their tolerance in my tactics.

I am pinchy and sparking but I don't have any empathy for anybody. It's just my personal style of expression. I say what you don't expect and I express myself with a way that maybe is not popular. But I say always the bare truth as I feel it, without any filter or diplomatic policy.

Ramalho does the same that's why you will never see him to coach in Europe or in the National team of Brazil. Original people have original expression, not computerized memorized responses like the translator or la-Moyes.

Freedom is the highest value in life, after that everything comes second. Even health is a matter of freedom because when you are not healthy you don't feel free. Freedom moves you in a dimension that overcomes the earthy standards.