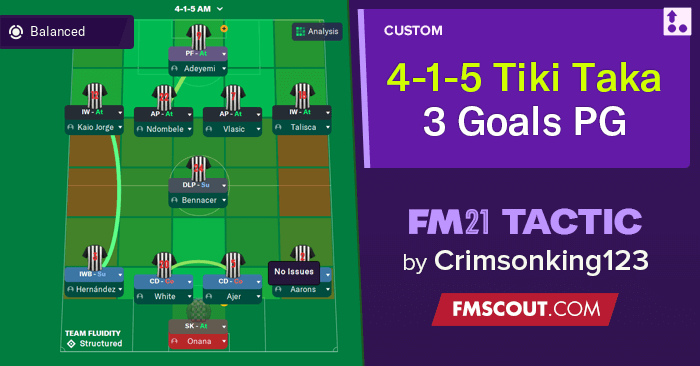 After playing around with a number of strikerless and gegenpress gung-ho styles, I decided to implement something different. The 4-1-5 aims to hold possession as long as possible in the final third until penetration is possible. Countering and unnecessary risks are contrary to the principles is this tactic. Teams with fast players revolving around the counter attack and/or a target man will not suit this tactic at all. Going into the season we were 5th in media predictions with the 6th highest salary per annum in the league. This tactic is optimal for top teams – mid table teams. It would collapse when used by relegation tier sides in comparison to a league because of their lack of technical prowess compared to their opponents. 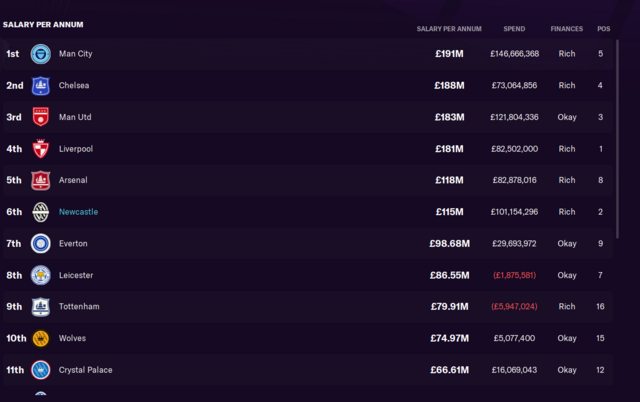 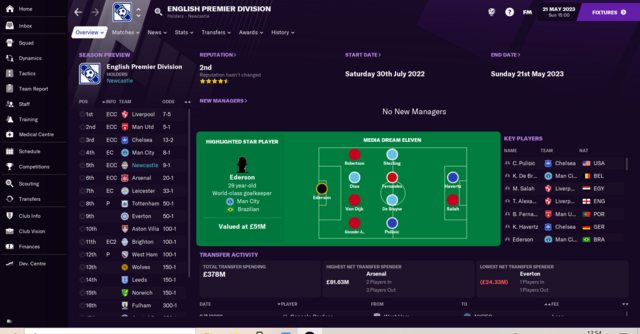 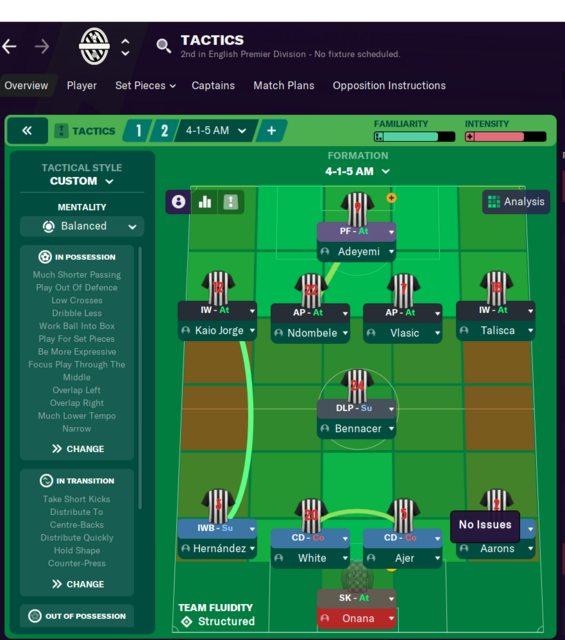 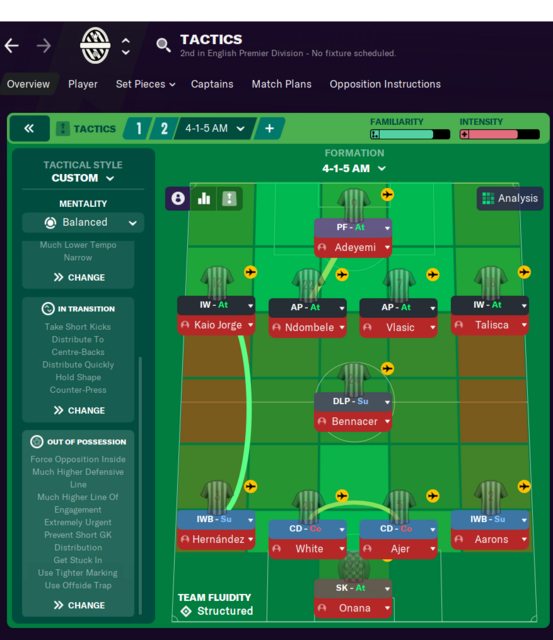 I will be breaking down the formation into four phases of possession – Build Up, Established Possession and the Attacking Phase. It’s important to note that not all teams utilise these phases but for a possession based style like this, it’s necessary.

While building up, the inverted wingbacks stay wide to help ball progression. Of course, the centre midfielder looks isolated but is not because of the tendencies of the playmaker 10s to drop deep. In this way, the central midfielder becomes more of a 6 and the 10s become 8s. The Inverted wingers stay wide to provide an outlet for the wingbacks while building up. This enables us to build up easily. When coming up against a two man midfield, the CBs can play through to the unmarked 6 or dropping 10s. This is because the pivot shape cannot step up/step close or risk ruining their shape. Against a more compact midfield, the spaces open up for the fullbacks to build up wide and then bring back possession to the middle as seen in our next phase… 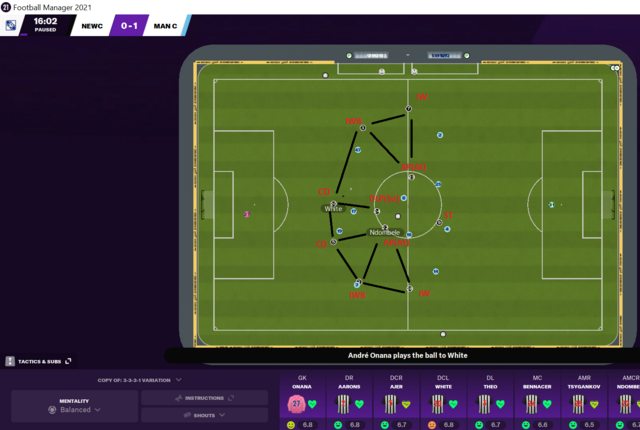 This phase of possession occurs in the middle third of the field when the team has established control and the opposition have to fall back to prevent gaps from opening. The centre backs step up higher and the fullbacks tuck in to create a 3-man midfield with the deep lying central midfielder. The Attacking Playmaker 10s move higher up the field into the holes between the striker and the central midfield, they are the cogs in this tactic and need to be technical minded players. The passing options for establishing the attacking phase are highlighted below:

Alternatively, the team can recycle possession back to the build up phase and reset if in danger of losing possession.

When the team enters the final third the centre backs step over the halfway line to keep the pressure if possession is lost. The deep lying playmaker “sits” just inside the final third to dictate possession. When either inverted wingback goes on the overlap, an attacking playmaker can take their position while the inverted winger moves inside like a sort of second striker. (2-1-3-4) 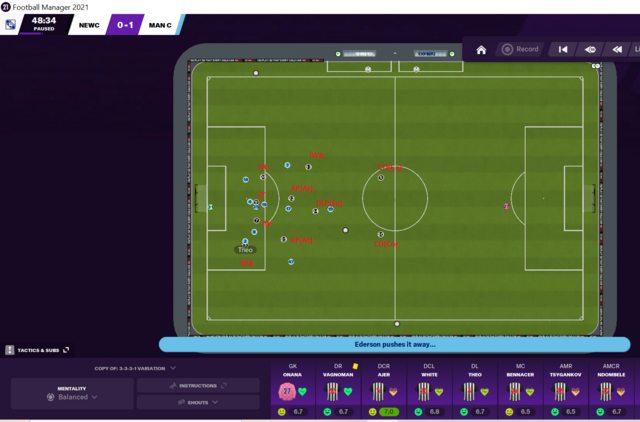 Alternatively, while the wingbacks are still tucked in, one of the number 10s can stay up high making runs and recycling possession while the other can drift around dictating play. (2-4-4, sometimes 2-3-5) 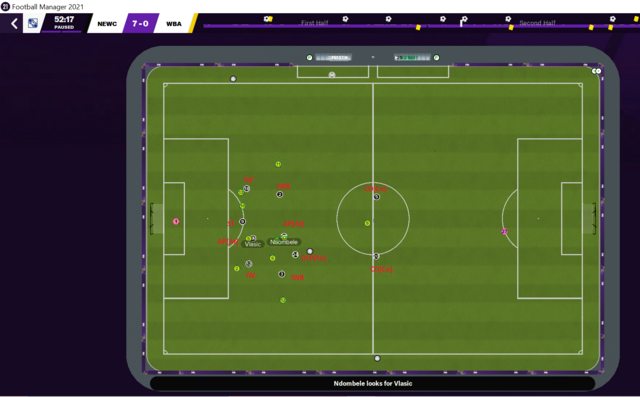 Alternatively while the IWB goes on the overlap, the other IWB can tuck in and make a defensive line with the deep lying playmaker while the attacking playmakers occupy the gap between this line and the forward line. The forward line is comprised of the inverted winger tucking in, the striker, IWB and the opposite IW. (2-2-2-4) 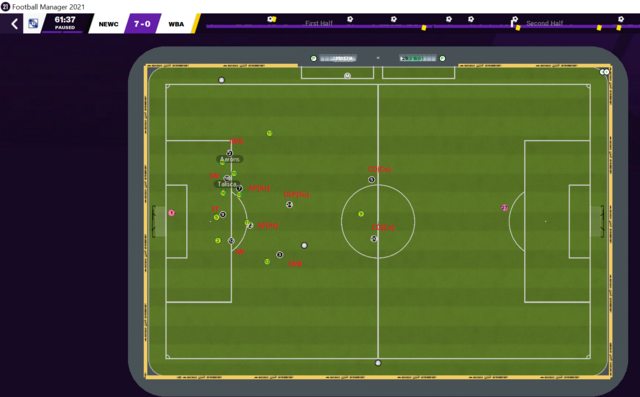 There are multiple other variations that could occur but the principles stay the same.

How does this team score goals though? Well by scoring a lot! 116 goals in the league to be precise lol. 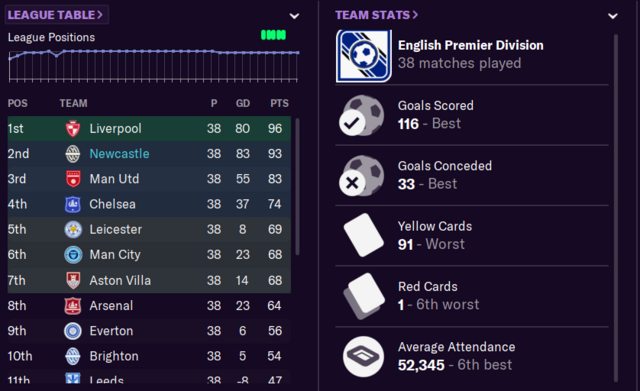 But seriously, the narrowness of the formation and lack of width except in some phases of play means we rely on through balls when gaps open due to the rotation and movement of our striker. In fact, in our last 50 games we average an assist per game through a through ball out of 116 assists. That’s almost half of our goals in that period! 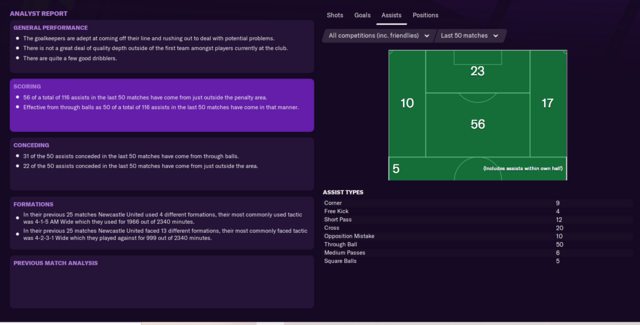 Crosses suffer as a result of this emphasis on entertaining chance generation. We rank last in total crosses in the season. This is expected but kinda hilarious considering we average sixty(!) percent possession per game. 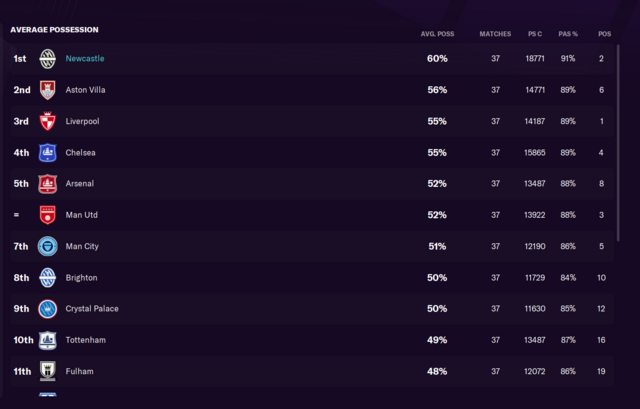 We also generated the most expected goals per game (88.02) in that period, if it works why change it? 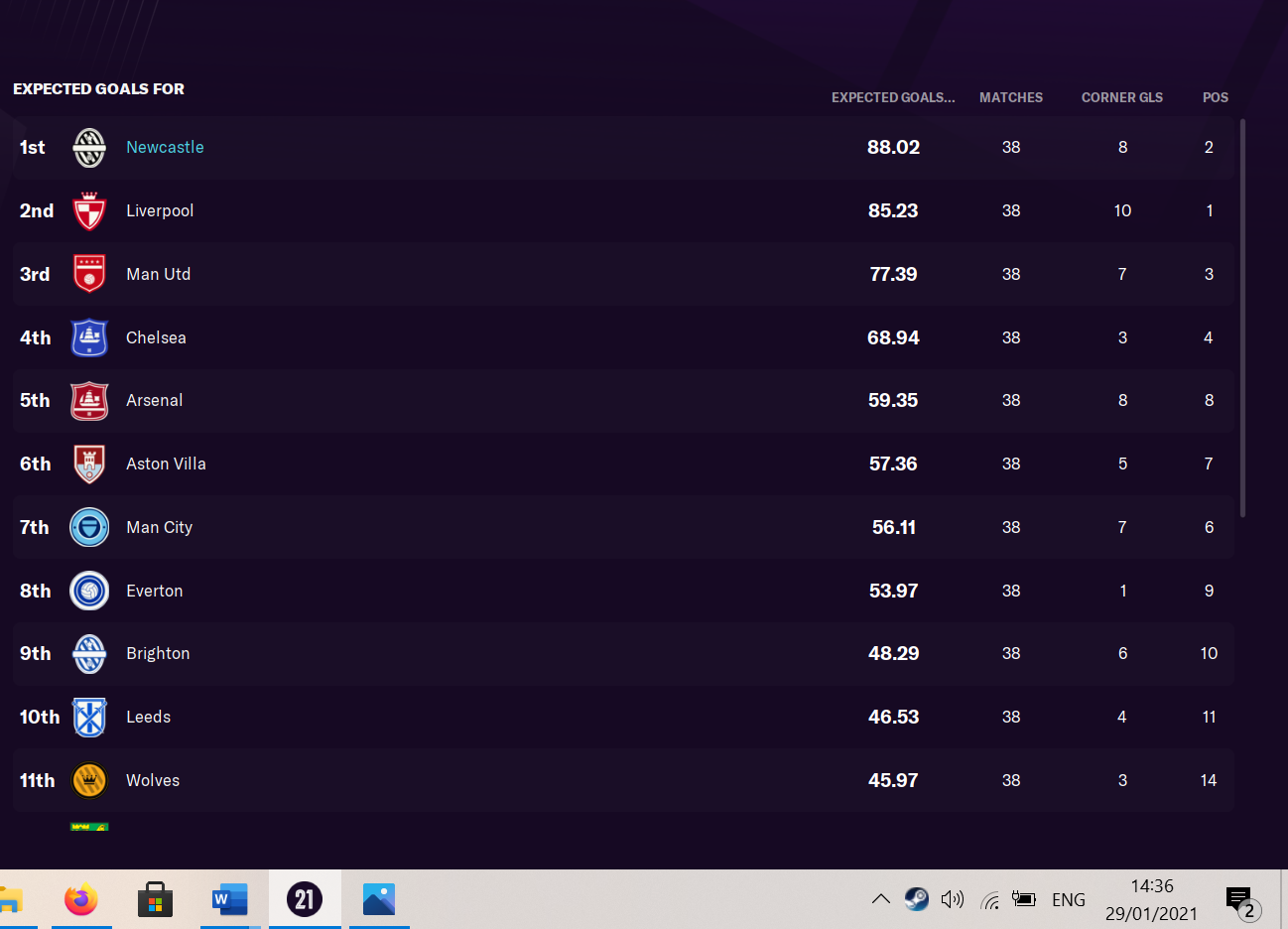 When we lose the ball, we try to win it back as quickly as possible in our 4-1-5 shape, however where a normal gegenpress would seek to make through balls quickly in space as soon as they win the ball back, this tactic seeks to hold shape and retain it before making an incisive pass after establishing possession. It keeps all of the “profit” and none of the “loss” (counter attacking risks) because of the sheer number of bodies making runs and movement in the final third.

Unfortunately we lost out on the league title due to Liverpool’s sheer quality, revenge was delivered in the Champions League final when we smashed the scousers 4 – 0. 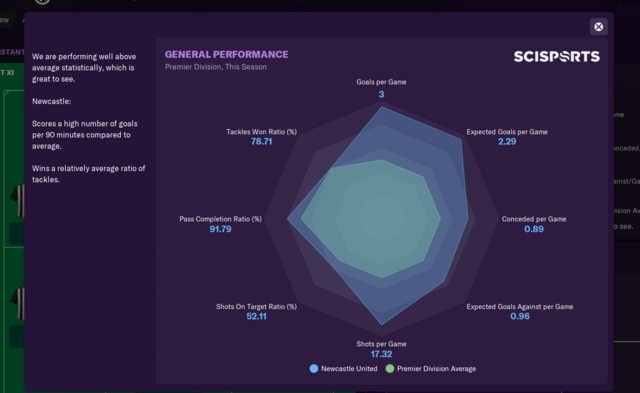 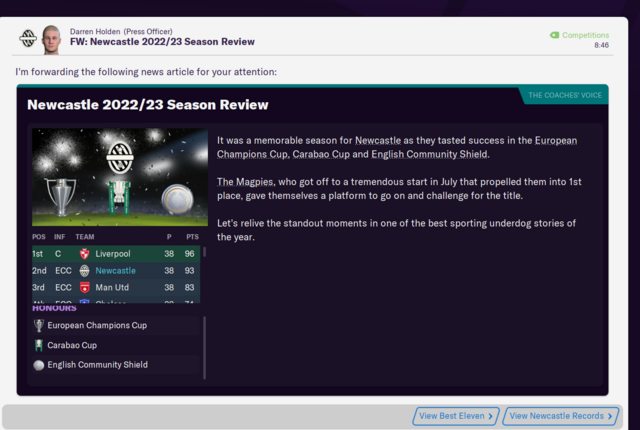 Creativity is delivered by the inverted wingbacks and deep lying play maker. The three starting players in this roles got 46 assists in total all season! The striker also provides his fair share of assists (18) due to his combination play with the IWs and 10s. 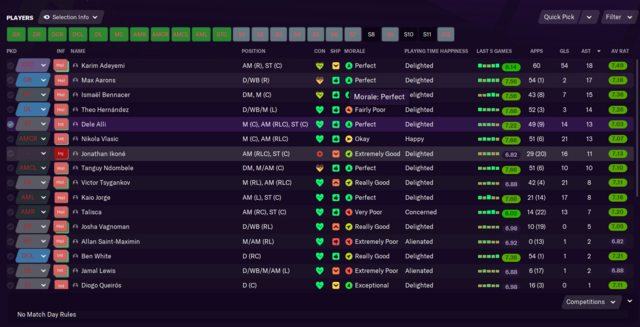 Make sure to download the actual tactic file as it contains a bunch of individual instructions to maximize attacking potential and opposition instructions to uphold our high press.