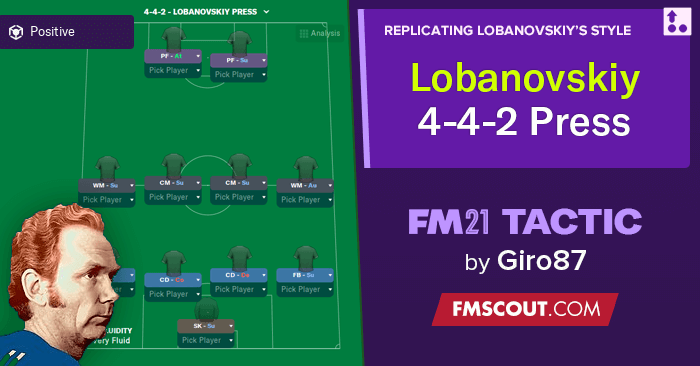 The main characteristics of Lobanovskiy's tactical style derived above all from a total trust that his players placed in him and that he placed in his players and in his project, creating a great harmony among the members of his teams and consequently a great reliability.

The Colonel always put the collective in front of the individuality and imagination of individuals, the result of an iron tactical discipline.

He preferred versatile players who could cover more positions on the pitch, to be able to "create unpredictable situations for the opponents" and to change the game in his favor even during construction.

The coach based his style of play on a great athletic preparation, very high pace of play for all ninety minutes, pounding pressing, ball often played low to the ground and in a fast and precise way, except for very fast long balls towards the outside.

Trying to make the most of the restarts with very fast attacking outsiders, zone marking, excellent tactical schemes made methodically studied by their "interpreters" until they learned them by heart, which produced a quick game that is both effective and sparkling, giving with "scientific football" his own vision of football at the time considered revolutionary, so much so that the specialized press redefined his method with the names "football of the 2000s", "laboratory football" and "Lobanovskiy laboratory".

Lobanovsky's team sided with a 4-4-2 zone, with the 2 lines of 4 almost perfectly symmetrical and equidistant, which lengthen in possession and tighten in phase of non-possession, continuously "manipulating" the dimensions of the playing space both in width and depth.

In the non-possession phase the strikers alternate in the folding action, with one of the two central midfielders floating between the departments to guide the movements, while in the possession phase the line-up is configured as an "unscrupulous" 2-4-4, made possible by a very short distance between the departments, often collected in less than 30 meters.

The great technical ability and the first intention exchanges between the two strikers make the maneuvering of the attacking actions extremely quick and effective.

PHASE OF POSSESSION AND CONSTRUCTION

The construction of the game starts from the bottom, to move the ball as quickly as possible towards the outside midfield or through the play of chains with overlapping full backs.

The action then develops with precise movements, repeated almost from memory: a very fast phrasing both horizontally and vertically. During this rapid movement of the ball, aimed at finding a free partner in space, the full-backs get up on the line of the midfielders and the outside midfielders go up or converge towards the center of the game perimeter with a continuous movement, almost constituting a role of added attackers.

Similarly, when the development in the central area of ​​the field meets the opposition of the opponent deployed in man marking or pressing, the choice falls on the direct attack of the opposing defense, through the verticalization in favor of the two strikers, equipped with great ability in insertions and able to communicate perfectly with each other on the strait (the Shevchenko-Rebrov couple is a more recent example).

The defensive line is never very high and the offside tactic is never applied systematically. The great compactness and proximity between the departments makes it possible to recover most of the balls through a suffocating pressing, in order to then be able to go as quickly as possible to the conclusion, through rapid phrasing in the strait and immediate verticalizations.

The closure of the passing lines created by the constant numerical superiority in the ball area, combined with a great synchrony in the movements, obliges the opponent to often force the game and often make mistakes.

In the non-possession phase, constant pressure in the ball area is evident (man against man and systematic doubling). The action is mainly devoted to recovering the ball rather than defending space, a bit like with the more modern Gegenpress.

In this phase of the game the form is configured in a sort of 4-1-3-2 in line, with the defense positioned in his own penalty area, a midfielder who lowers himself in marking and the other midfielders (assisted by one of the two tips) placed in a slightly more advanced position, ready for the offensive transition. The other striker is entrusted with the task of lengthening the opposing team, as well as receiving the possible long ball, once he regains possession.

Defensive transitions are strongly characterized by the immediate regaining of possession. At the moment of the loss of possession, the team assumes an extremely aggressive attitude: this is the connotation that most characterizes Lobanovsky's tactical creed. This "re-aggression" towards the opposing player is carried out above all by the players who have lost possession, exploiting the numerical density created in the ball zone.

ATTRIBUTES THAT FAVOR THE MODULE 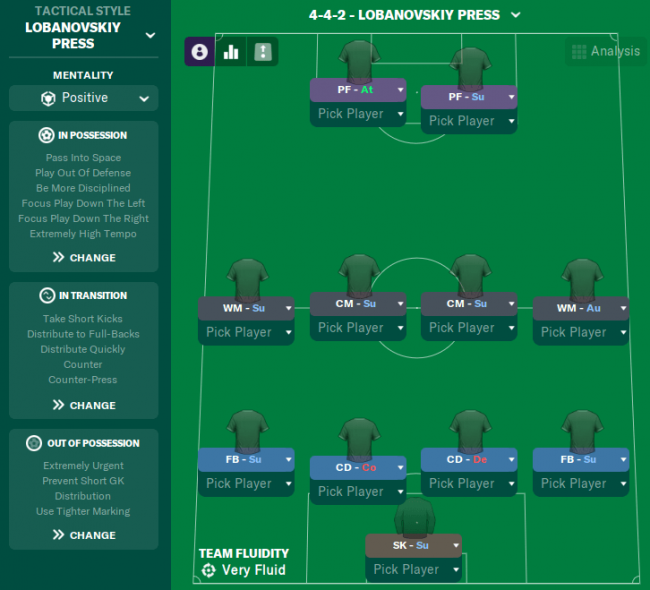