Jer
7 years
Found this little piece of jewelry here! I love it! Bag the title! *teabags Walter*
1
Login to Quote

edu1878
7 years
Pauker: I normally don't condone that, but, considering it is Walter feel free to go ahead.

wellsy: Thanks for that, hope you keep reading.

Walter: What are you going on about?
Login to Quote

To all the Throstles out there,

When I joined this magnificent club as manager three weeks ago, I knew I had picked the right place to start my managerial career. The squad was good, the facilities were great, and the stadium was better. but the best part of the club was you, the fans. On the day of the announcement of my hiring, to the time when I wrote this letter, you have been nothing but supportive. Due to this great support, I have decided to write to all of you to outline my goals for this great club, for the foreseeable future and beyond.

While at the beginning the times may be tough, I urge you all to stand united, to put your support behind this great club, because out of those tough times, a new era will emerge for both West Bromwich Albion, and English football, because of what this club will have done. Throughout the next few seasons, I will be looking to build a squad capable of challenging at the highest level of football, as well as at home. Once that squad has been built, it will be time for this club to become greater than any other. Not only will I be looking to take over the Premier League with WBA, but I will also be looking to do it with products of this clubs youth facilities, with a preference placed on home grown players, in situations where there would be a choice. If we can achieve this, we will be a club on unparalleled grounds, in a place where no other club has gone before us. I promise you, if we all rise together as one, not a single club can stand in our way.


I’ll see you on the other side,
Stephen Clarke
Login to Quote

Walter
7 years
Fantastic idea of getting your goals across, sets the story apart from most others


It was originally announced on Twitter, but despite what is said about the social media site, it is most certainly true. In what will be seen by many as a magnificent day for Baggies fans worldwide, the club has unveiled the two latest signings to be made by first-time manager Steve Clarke, with Jean-Armel Kana-Biyik and Lorenzo Insigne joining on permanent deals from Stade Rennais and Napoli respectively.

The tweet that announced the new man to the Throstles fans.

Kana-Biyik joins the Throstles for a fee of £3.4 million from Stade Rennais FC in the French Ligue Un. He leaves the club after making 28 appearances in one season after the joined Stade from Havre AC in 2010. Upon arriving at the Hawthorns for a first look around his new home ground, Jean-Armel had this to say “Obviously it is great to be joining a club like West Brom, with them of course being in the greatest league in the world, and with their fantastic fan backing, but, with this said, a part of me will miss my time at Stade Rennais, and I would like to thank all the fans and staff at that wonderful club.”

West Brom’s other new signing is 20 year old Italian Lorenzo Insigne, who joins the Throstles from Serie A club Napoli for a fee of £550k. The 20 year old had spent 3 years at Napoli, although much of that time was spent on loan at Foggia and Citta De La Cava. Upon his arrival at the Hawthorns, Insigne fronted several members of the media, and took the time to thank all the Napoli fans, and to state his excitement at joining West Brom.

And to the signings, they are great. Insigne is a coup as well, saw him put in a man of the match performance against Dortmund the other day

• Good wins against Wisla, Airdrie, Olympiakos, AEK and Sporting
• Losses to MK Dons and Middlesbrough concerning
• Dorrans and Brunt in amongst the goals with 3 each
• Several New signings also recorded goals during the teams pre season friendlies
• Pre season Record; 6-0-2
Login to Quote

Walter
7 years
Conceded 4 to your reserves

But on the positive side, some great wins including the ones against Olympiakos and AEK

• Undefeated Month
• Ended month in first
• Scored Nine goals, and only conceded two
• Progressed in the League Cup
• 100% going into month 2 of season 2011-2012
• Will play Chelsea in the next round of the League Cup 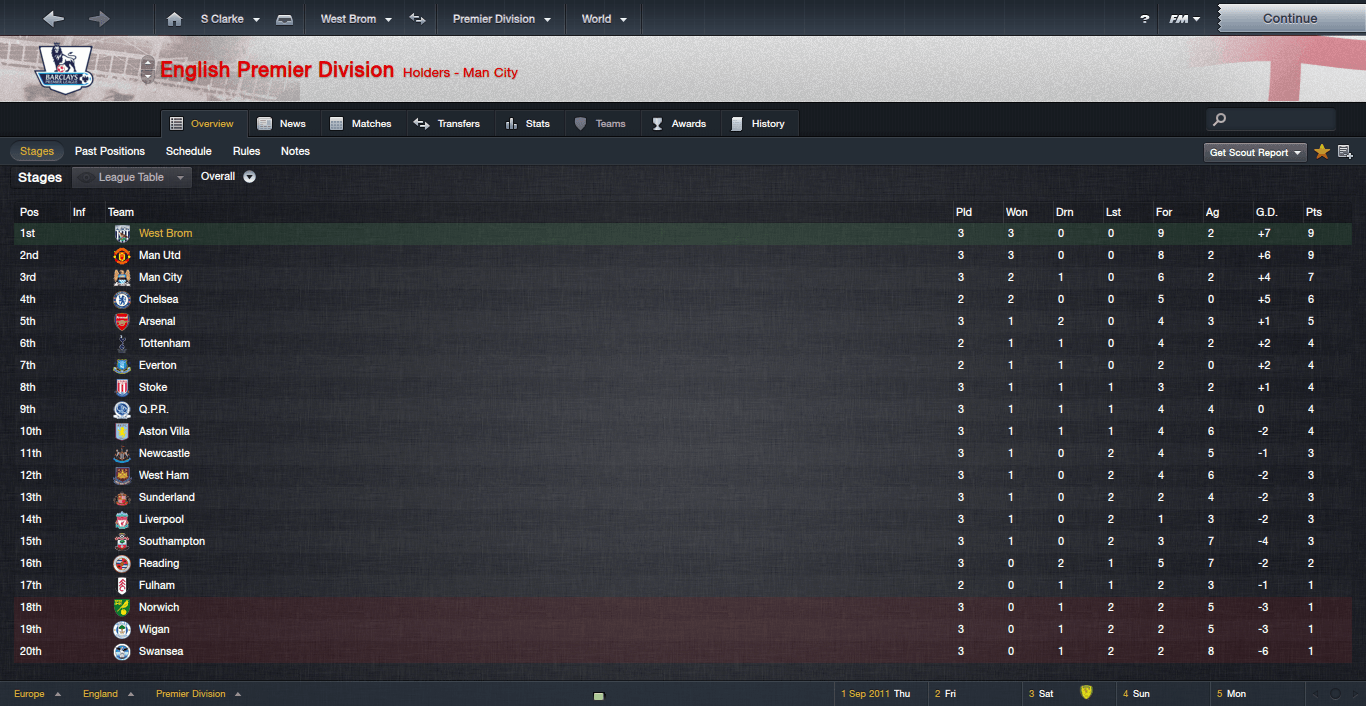 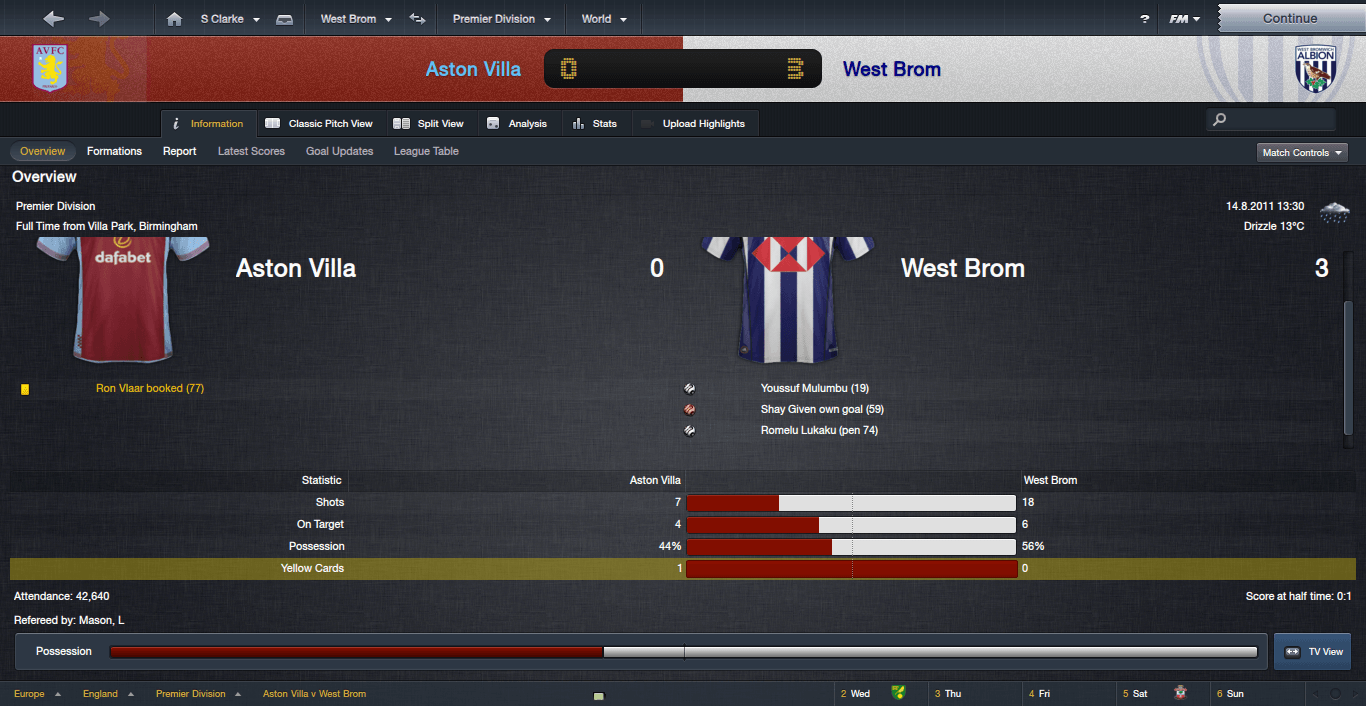 Walter
7 years
Fantastic month both league-wise and in the cup. Should be a big challenge against Chelsea in the cup but looking at your current form I think you can give them a run for their money.
Login to Quote

edu1878
7 years
It will be tough. Very tough.
Login to Quote

(joking) but months like that will definitely lead to European qualification, good luck
Login to Quote

A Special Announcement from the Author 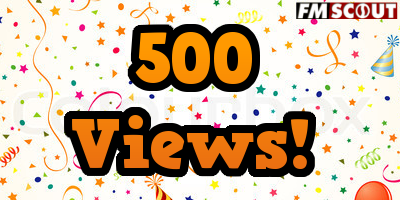 Yes, that's right, Steve Clarke has hit 500 views. I would like to thank everyone that has taken the time to read any part of this story, as well as comment on it. All these views and comments mean a lot to me, and give me extra motivation to make this story special.
Login to Quote