West Bromwich Albion have today held a press conference to announce their final four signings, and final outgoings of Stephen Clarke’s first transfer window, even though some of these players have featured for the club already. Joining the club are Alex Smithies, Bashkim Kadrii, Owen Hargreaves and James Beattie, with James Morrison leaving the club on a permanent deal, as well as Marc-Antoine Fortunè, Donervon Daniels, Kayleden Brown and Adil Nabi all exiting the club on loan deals.

Alex Smithies joins the Throstles from Championship club Huddersfield Town in a deal worth £2.3 million to the terriers. The 21 year old English keeper joins on a contract worth £7k per week, as is seen as having great potential, and a glistening future. His contract will run until the end of the 2013-2014 season.


http://i2.examiner.co.uk/incoming/article4898579.ece/ALTERNATES/s615/alex-smithies-during-the-penalty-shootout-873416140-4898579.jpg
Young goalkeeper Alex Smithies making the save that sent the Terriers up a division.

The other paid incoming, is the £1 million Danish attacking midfielder Bashkim Kadrii. The 20 year old joins from Danish side Odense Boldklub, whom he joined from B93 for £80k in 2010, representing a £920k profit for De Stribede. The left-footed central player will be on a contract worth £5.75k a week until the end of June, 2015.

The other two incomings are both free transfers, with James Beattie and Owen Hargreaves both joining the club after spending some time unemployed. Both this signings have been touted as adding experience, as well as filling out the baggies squad.

Five outgoings were also announced with four of them being loan deals, and one being a permanent deal. The solitary permanent deal was that of the departure of James Morrison to Napoli for a fee of £7 million. The four loan deals took Adil Nabi to Wycombe, Kayleden Brown to Aldershot, Donervon Daniels to Shrewsbury and Marc-Antoine Fortunè to Bolton, with the Trotters having the opportunity to make the deal permanent if they wish.
Login to Quote

Walter
7 years
Some good deals both ways, it will be interesting to see how Hargreaves fares given his injury record.
Login to Quote

edu1878
7 years
Walter: Thanks, it could be interesting.
Login to Quote

Walter
7 years
Nice squad, hopefully they can kick on in the PL
1
Login to Quote

edu1878
7 years
Walter: Seriously Walter, I only just put it up. Thanks anyway.
Login to Quote

• We continued our unbeaten run until the penultimate match of the month
• The 3-0 loss to Liverpool was our first loss all season, and our worst match so far
• A 3-1 victory over a second-string Chelsea secured qualification for the next round of the League Cup where we will play Newcastle United
• 3 goals scored in the league, with two conceded
• 3rd place at the end of September, with us 5 points behind Manchester United, and behind Manchester city on GD
• Bashkim Kadrii scored his first ever goal for the club, with Shane Long taking his season goal tally to 7 in all competitions 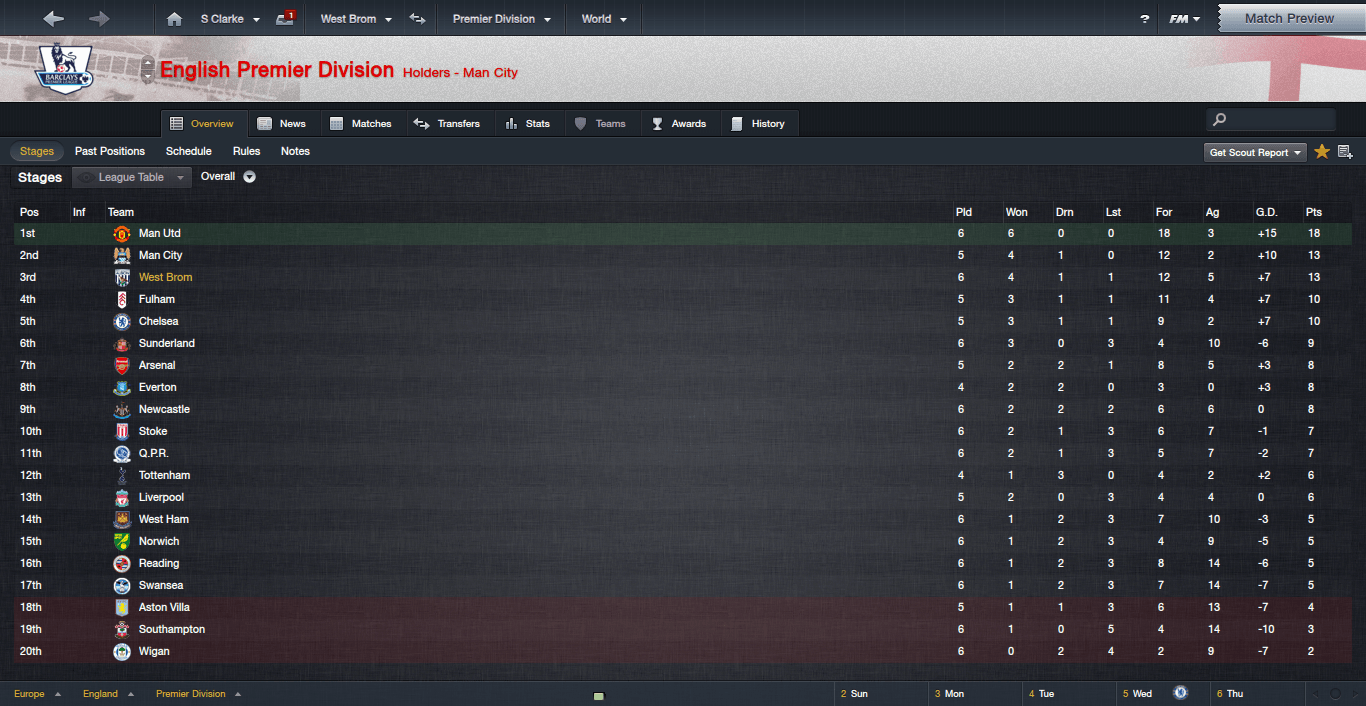 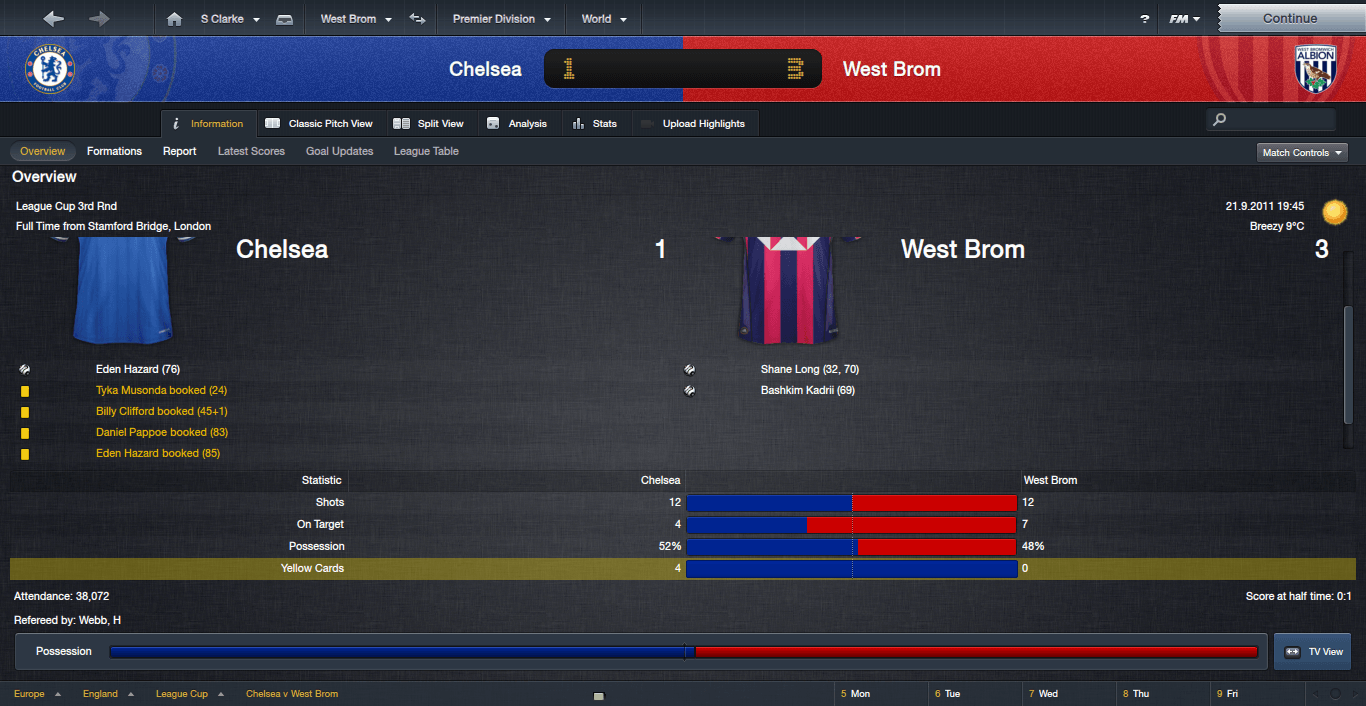 Walter
7 years
A great win versus Chelsea. Unlucky versus Liverpool but you are going strongly.
Login to Quote

Arvind
7 years
That's an excellent start, and thank you for losing to Liverpool

They'd be in the relegation zone without your help.

Also, great result against Chelsea! Are you hoping for a CL spot for next year?
Login to Quote

What does 1 goal, 3 men, 4 punches, one racist remark, a fight and £37,500 worth in fines have in common? They were all part of the before, during, and aftermath of the bitter battle contested on the touchline of Anfield on Monday, when West Bromwich Albion were defeated 3-0 by the home team Liverpool United. Shortly after the seconde goal there was a fight on the sidelines, with all three men involved going at each other in a very aggressive, and truly unfriendly manner. Here are the facts, as they happened;

28’37”: Steven Gerrard scores Liverpool’s second goal with a penalty, and runs over to the corner of the field to celebrate, where he is joined by Luis Suarez.

28’45”: WBA manager Stephen Clarke notices something done by Luis Suarez, with it most likely being a racist comment aimed toward someone in the crowd.

28’50”: Steve Clarke runs out onto the edge of the field, and vociferously protests what has just occurred.

29’30”: The fight is broken up, and the three men separated by players on the bench for both teams, as well as the fourth official and linesman.

29’40”: All three men are sent off the field, with West Bromwich Albion finishing the match under the direction of assistant manager Kevin Keen, and Liverpool under the tutelage of Rodolfo Borrell.

After the match: All three men are fined £12,500 each, with Brendan Rodgers and Colin Pascoe each receiving two match touchline bans for throwing punches. The incident involving Liverpool striker Luis Suarez that sparked the fracas is still under investigation by the FA, British police and ground security. All three men involved in the fight have publicly apologised, and have all offered to donate funds to their respective local football team, with the exception of Brendan Rodgers, who has “Absolutely no interest in donating any funds to anyone, for any reason at all.”
Login to Quote

Arvind: You're most certainly not welcome. Unfortunately we couldn't keep the in the relegation zone, and to be fair, it was a decidely second-string Chelsea side. I hope *crosses fingers* that we do make it into the UCL, but I think I could live with UEL. Nothing less though.
Login to Quote

I mean, come on... you see how I beat the crap out of people that disagree with me. Thank God I haven't had agent spats in a while... all my players are resigning :).

An excellent result against Chelsea. I don't think that West Brom can make the CL this early, but you're definitely within a shout of doing it next season. A few good youth prospects, and you're in business for getting there. It's only a few small tweaks that are the difference between anonymity and greatness
1
Login to Quote