No1VillaFan
8 years
GET IN! awesome start I will follow and u better had stick to this one or i will hunt you down muhahahahaha
1
Login to Quote

Naveed Will need it

Jason No worries man, I always enjoy playing as shamrock so this will be good.
Login to Quote


So after my press conference was over it was time to get the show on the road. Now the press conference was not what I expected, only two sources of media showed up for the event. Boy was I upset, I know we're as good as we were in the past but wouldn't you believe that a 26 year old getting a head-coaching job with one of the best if not the best club in the country.

So after that disappointment it was time to get down to business. I meet with the players and they seemed pretty iffy about me getting the job. After I explained about my goals and visions they thought I was all nuts. One player told me this was not a video game. So after that so-so introduction it was time for her first friendly. Wow these guys really suck I sent myself, thank fuck the reserve squad is good enough to win the reserve division this year. A 0-0 draw was very unacceptable.

Now comes something really good. I was handed a list by our chief Scout, that pertained over 100 players that were available for free and would be willing to possibly take a pay cut to play here. The one person I really was looking for was a goalkeeper. I found a really good 26 year old thanks to the list. The name is Julio Cesar of Brazil. Now another player I found was a guy named Carlton Cole. Yes that is right the one, the only Carlton Cole. I got the phone and called him and his agent immediately. After about an hour of going back and forth on contracts, he finally caved in and signed. Sadly things feel through in the last minute.

Now it was time to find a few clubs to play preseason friendly's with. My biggest issue was conditioning but knowing we have a very important season ahead of us, we need to be prepared. We will be facing clubs from both Northern Ireland and the Republic of Ireland. The teams I contacted and said yes are Sharno Santos, Phoenix FC, Donegal Celtic, NFC Kesh, Distillery and Newtown Rangers.

These matches could go either way for the club. I'm hoping we have really good results and not any massive ass kicking's that go against us. Hopefully by August we will be ready for league play. Hopefully we can win a few more games than the club did last year and make Europe once again. While I would like the one league, but realistically there's no chance in hell. I will settle with fourth-place since that will get me into a European competition. With the two cups I feel we should make it pretty far and hopefully make the quarterfinals of both competitions.
Login to Quote

k1rups
8 years
Great start mate and some very good detail in your posts! Looking like a good challenge so good luck
1
Login to Quote

The 2013/14 preseason is finally came to a close. It was a really good one for Shamrock as a faced three clubs in the reserve side. Originally there was going to be about eight preseason matches but due to time constraints the schedule had to be reworked.

At first the senior team faced off against the reserves. It would be a 3-2 victory for the senior squad. The goals were scored by new acquisition Christian Lobato and fan favorite Mark Quigley. The reserves put up a really good fight during this match this will make the club proud as they try to win the reserve league.

The next three matches were away from our stadium. We face Monaghan United, Cobh Ramblers and long ford. In total Shamrock score 8 goals in the three matches. Well keeping a clean sheet in each and every single one. Thanks to Brazilian Julio Cesar, we were able to keep morale up. During these three matches new manager Mike Korrigan seem to be pleased with the way the club is progressing. In a few days the 2013/14 Airtricity league of Ireland Premier division takes off as your Rovers will travel the Cork to face Cork City.

In other news Sky Erie about their preview for this year's league season. They have Shamrock Rovers in St. Patrick's Athletic as the two clubs who have the highest chance to win the title this year with 4-6 odds for both. Sligo, Derry and Cork all round out the top five at evens. This should be an exciting year for both the club as well as the league. The first home match will be taking place on 9 August as Athlone Town pays a visit. Shamrock will also be participating in the EA Sports Cup and the Ford FAI Cup. Both cups will be played later on in the season.

In October please stay tuned to www.shamrockrovers.ie for a major announcement. This will be a part of the chairman's yearly address. It will be very important for all fans and anybody else involved with this club to learn about what's going on. We hope you all have enjoyed this little preseason/season review and hope to see you at the games.
Login to Quote

Well the first month was pretty good. Even though we had a weird start to the season I feel really good about what went on. What was amazing was the fact we are now partnered with Tottenham. This allows us to get a few players on loan and we got them. Towards the end of the month Mark (Quigley) was unstoppable with all the goals he scored. The match against Derry in the EA sports Cup was nice, now we move on to play Limerick. 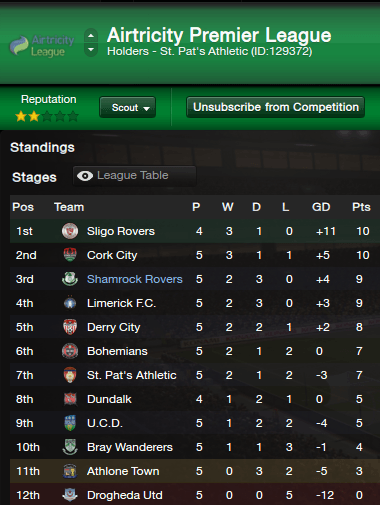 but good luck with achieving your goals
Login to Quote

MJK46
8 years
@Jason Haha yeah that's funny. sadly that could be the reason the league is not licensed.

@Naveed Thanks buddy
Login to Quote

For reigning EA Sports Cup champions Shamrock Rovers, this should have been another long and exciting run to the final. It wasn't the case as Limerick FC pulled off the upset and beat SRFC in penalties. The comeback was due to a two goal collapse by the home side.

Striker Eamon Zayed gave Shamrock the early lead with a header inside the 6 yard box during the 12th minute. Fan favourite Stephen Rice would help add to Shamrock's lead as he scored a well placed shot during the 18th minute. With this early lead the fans were excited about moving on to the third round.

Conditioning or lack there of it would be the main cause to the collapse. An error from SRFC's Derek Fran allowed Limerick's Craig Curran to score the first goal. Another mistake by Shamrock's defense would be the cause of the equalizer. After the goal it would remain scoreless and would go all the way to penalties. Limerick would win from Robert Kovacsevics' goal during the last round of penalties.

With that victory Shamrock will no longer be moving on and Limerick will move on to face Longford.
Login to Quote