Verdinho
6 years
Great month! Next one is a big one!
1
Login to Quote

TylerK
6 years
Not doing too bad in the UCL, on the bright side, if you get 3rd you'll be in the Europa league at least
1
Login to Quote 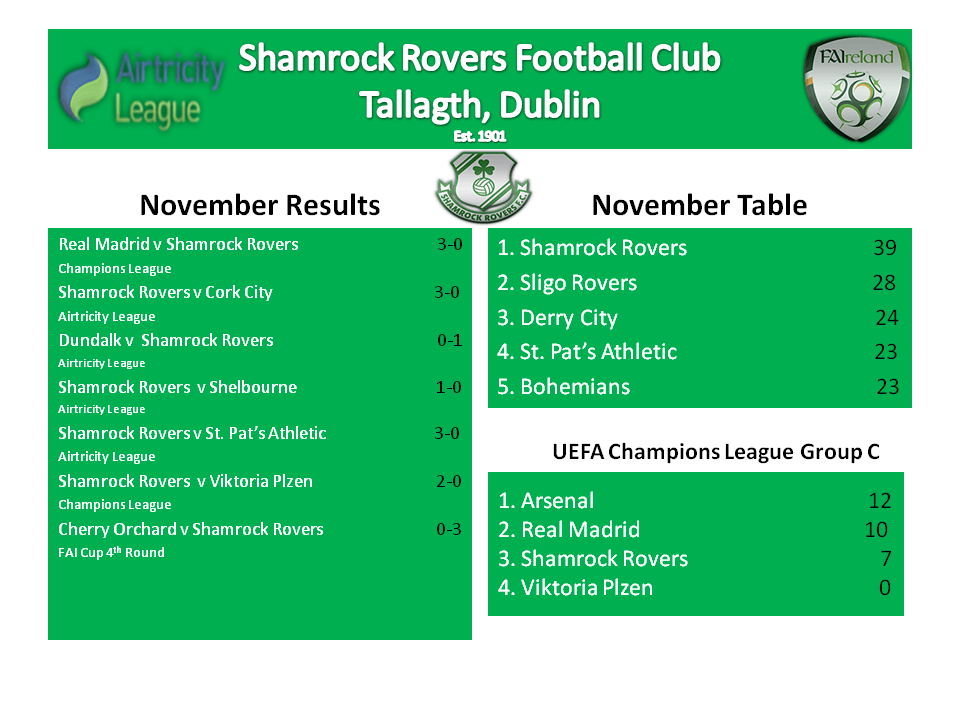 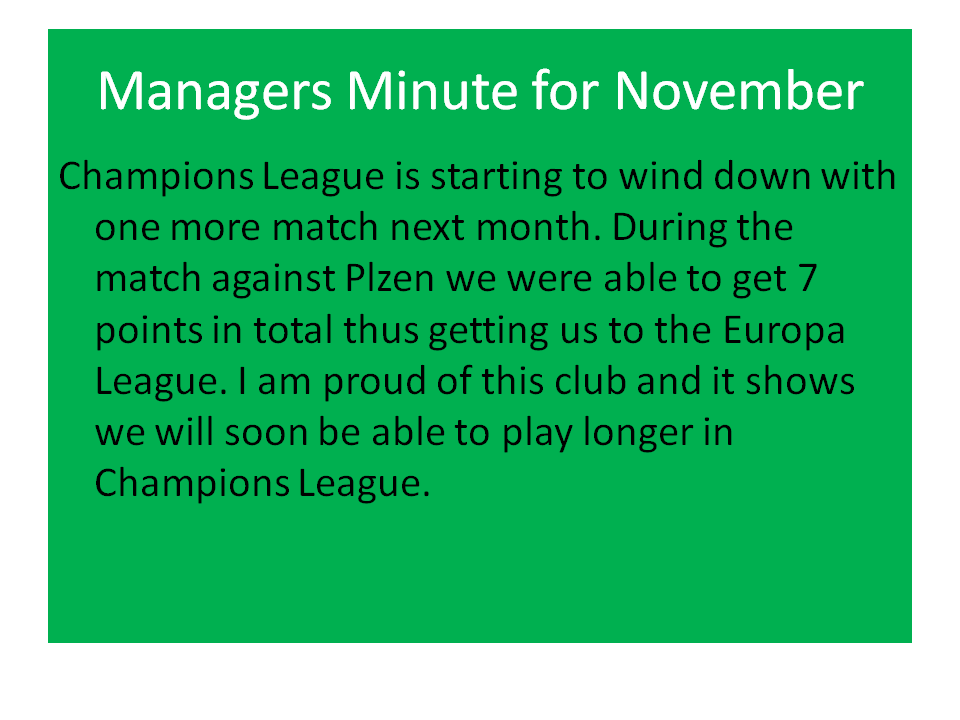 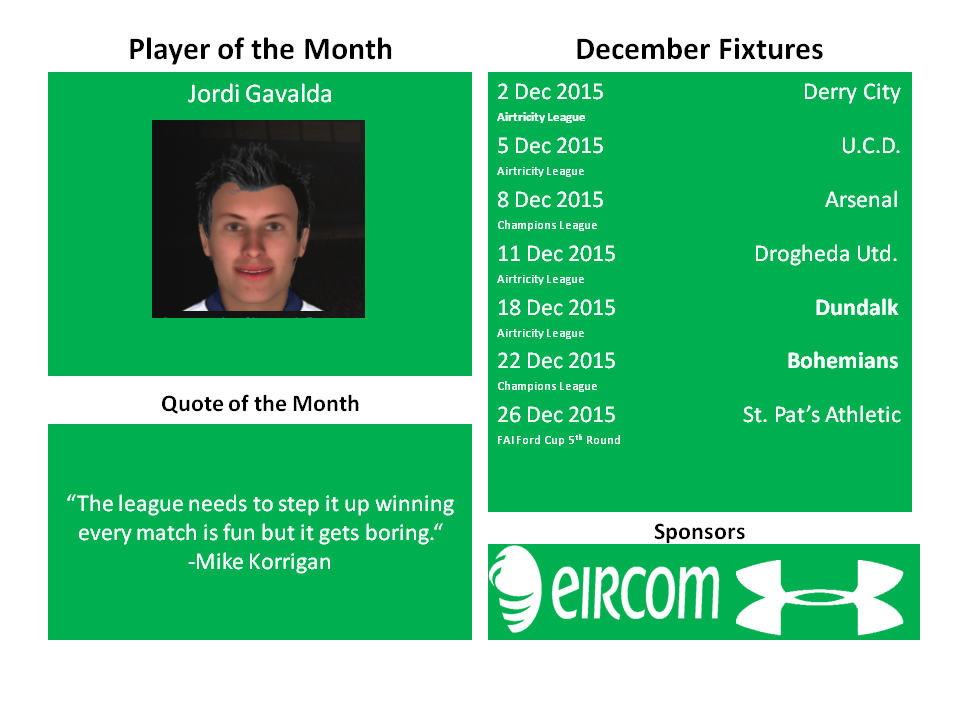 
So after months of not playing I have decided to bring this story back to life and continue the domination. Yes He's Got the Whole World in His Hands will still be played in addition to this.

My next update will consist of a end of season review of what happened in the few months that I have not told you about as well as a little flashback of the last few seasons.

I hope you all will enjoy this continuation!!
Login to Quote

Dippofix
5 years • Edited
Oh, this goes on. Great that you're getting it started again, would you mind giving me a real short recap?

Sure, the next update will be a review of the 2015/16 season as I went too far ahead to continue writing so that will catch you up a bit.

Basically we are dominating Ireland and starting to make noise in Europe. Most of my transfers have been free nationally caped Irishmen like Keane, Westwood and Hunt. In August I signed this kid from Barca and he has been lights out.

Stay tuned for the recap to find out how well we did.
Login to Quote


It has been a memorable 2015/16 season for the Hoops. Coming off a season where the team completed the famous Irish Quintuple, expectations were place higher. Well Mike Korrigan's squad made things look easy once again as they repeated in winning the Quintuple and went far in Europe. Since joining back in 2013 Korrigan has three league wins and nine cup wins.

A few years back the club launched the 2020 INITIATIVE as way to better the Shamrock Rovers Brand, Well three years into its initial launch the club has pretty much completed all goals. This season saw the club win a record 20 LOI titles, stadium expansion to 11k and making it to the UEFA Champions League Group Stage. The club still has much to do but are looking good.

Entering the 2015/16 League of Ireland season the Hoops were looking to win every match. Sadly that did not happen as they drew four times again. Also the club won the title in mid February for the second time in a row. Many players were named to the LOI Best XI once again and Korrigan was named manager of the year for the third season in a row. Spanish Youngster Jordi Gavalda lead the club in league goals scored with 20. Next the Rovers had another amazing run when it came to all of the major Irish Cups. It was once again an easy sweep of the four major trophies (Irish Shield, FAI Cup, EA Sports Cup and the All-Ireland Cup). The senior quad will be looking to repeat once again next season.

Finally the Rovers had one of the most amazing and dramatic European season in club history. It all started with an 18-0 agg score against Santa Coloma to kick off Europe. Things got even better after the BATE matches. Shamrock became the first Irish club to make it to the Champions League Group Stage. Drawn against Arsenal, Real Madrid and Viktria Plazen the experts did not give the boys a chance. With two victories over Plzen and a historic draw against Real, Shamrock survived and were able to move on to Europa League. After a shocking victory over Leverkusen the dream would end in the next round against Schalke.

This past season was amazing and the Rovers are looking to repeat in all competitions. Hopefully Europe is ready for us next year as we keep improving. The hoops return to training on 20 June.
Login to Quote

Zed
5 years
Great run in the Champions League, and in all of those cups as well! Very good season!
Login to Quote

Dippofix
5 years
Great season, hope you can make it out of the group stages next year. Will be tough, but do-able if you end up in the right group.
Login to Quote

Dippofix Thanks, I want to advance as well. Hopefully the GS draw is friendly if we make it to it.
Login to Quote

Entering season number four manager Mike Korrigan has a lot of things to work on. Despite winning their 20th title in the previous season and all of the cups in the country there is still work to do.

"Last season was a success especially in Europe but there are still things that need to be worked on, our main goal this season is to go 33-0-0. Anything less is a failure," said Korrigan.

This season also marks the return to Tallaght Stadium after a season away. The new upgrades of the stadium include a new clubhouse, hd video board, luxury seating as well as 3,000 more seats. The first match at the grand reopening of the stadium will be on 13 July against Cliftonville in Champions League Second Qualifying Phase.

For this transfer window many Rovers fans will be praying like crazy. Many of the younger stars including Jim Mulholland, Rodolfo Veronand and Elliot Phillips are rumored to make an exit from the club. If any of these players leave it will be hard for the club as they were major contributors last season. The only transfer in so far is ex Celtic keeper Lukaz Zaluska who will be taking over as backup after Keiren Westwood declined a contract extension. The 34 year old Polish keeper joined on 28 June on a free.

The 2016/17 League of Ireland season will kickoff for Shamrock on 30 June. Date may change depending on European success.
Login to Quote

BELFAST- In what was seen as a highly anticipated Champions league match between the two Irish clubs, Shamrock would out class Cliftonville by a score of 6-1 (8-1ag). The club from the republic could not be stopped as Cliftonville commited many costly fouls that lead to converted penalty kicks. It was not all good news for Shamrock as three players would go down with injuries.

Young midfielder john Kehoe showed signs of what was coming for the home side as his mmistake almost lead to a Shamrock goal in the 23rd minute. That same minute off an interception centre back Eliseu Te would score a beauty. This goal would kick off an amazing day for him and misery began for the Reds.

Shamrock's Jordi Gavalda doubled the lead with a real poachers effort two minutes later. That would be his only goal of the day. Later on Cliftonville's Joe Gormley pulled one back in the 50th giving the home side their only goal.

After his goal Shamrock would wake up and score four more times. Two of those goals were scored by Te as he finished his hatrick in the 76th off a penalty. Striker Tomislav Kis scored right off the bench in the 70th.

Kis came in after the young 21 year old Gavalda had to be substituted out due to injury. After the match head physio Willie Conlon announced that he has a torn calf muscle. This injury could kill Shamrocks run in Europe as he will be out for 5 months. It was also reported that Oumar Essien will be out for two weeks with a bruised rib and Christian Lobato will be out a month with a pulled hamstring.

Shamrock move on to the next round and will be facing Slovakian club SK Slovan Bratislava. The matches will be played on 27 July and 3 August.
Login to Quote