Neal
6 years
My Chilean right back is BEASTLY, thank you very much

Walter
6 years
Pompeyblue Thanks once again Pompey, glad I was able to tie him up.

Berbatov Thanks. I think he is the only player in our squad who could jump straight from Championship level to PL level.

Howard was signed solely for the purpose of back up, and for a Limited Defender whose job was to just get it clear. If you look at his stats here, I've highlighted the ones needed for the role. Howard LD(D). Also, he's brave, got good work rate and fast for a central defender, so I'm quite pleased with my acquisition

Said Walter, aged 4 and a half.


The first competitive fixtures had come so quickly, hopefully we could avoid something like our friendly against Notts County.

As I mentioned earlier we were given a very nice draw in the Capital One Cup where we would face League Two outfit Rochdale. But before that, we would travel to Keepmoat Stadium to play Doncaster Rovers.

Isaiah Osbourne was played into the right side of the box after a tense early start and managed to hit his thunderous shot straight at Ross Turnbull. But it was so thunderous that the ex-Chelsea keeper could only push it high into the roof of the net for 1-0.

Whilst Donny were chasing the equaliser, the ball was played back to Turnbull inbetween his box and the halfway line. He hesitated on the ball and loanee Nathan Delfouneso managed to capitalise and all but seal the game.

I prefer not to talk about the Capital One Cup game. Embarassing, rigged, everything bad about football - it all happened in Rochdale. 2-1 loss in extra time.

As I'm covering both months I'll stick to the best matches so far. We lost late on at Boro and Reading outplayed us to easily, causing for a defensive reshuffle which was Mark Howard included. It worked and we sealed victory versus Watford courtesy of a Marvin Zeegelaar tap in.

The next game against Bournemouth was one to remember. We got a strong away following down in the south and they were given a victory to savour.

Three goals in the first sixteen minutes to make it 3-1 meant it was a sweet victory already. I reminded the players on task and they duly did, Ricardo Fuller and Tom Ince getting themselves on the scoreboard before the long bus trip back. 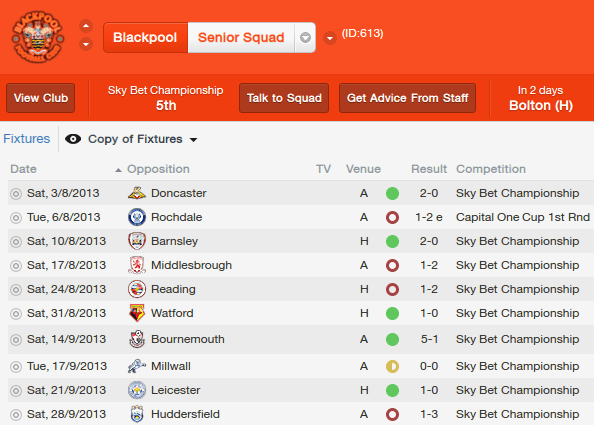 This strong first couple of months has left us in a strong position to start off, and I think we can build on it over the course of the coming months. This is one hell of a tough league and we are going to need to find some freebies to improve out depth in my honest opinion.

Aaron
6 years
Well, not the worst month but certainly not a bad one! Let's hope you can get some more points on the board next month! Love the way you screenshotted the actual game as well!
1
Login to Quote

Verdinho
6 years
An okay start to the season. There are no easy games in the Championship so you certainly have a solid base to develop from in 6th in order to fight for promotion/play-offs

pompeyblue
6 years
Nice update and a decent start to the season.
Hopefully next month you can grab some more points and push even higher up the table

Jer
6 years
Considering that both Reading and Huddersfield are close to you (points) it's understandable that you lost against them :P. Good luck!
1
Login to Quote

Aaron Thank you, I agree with what you say.

Paddy I agree, not the best start ever but something to build on.

Pompey Thanks mate, that's the plan.

Pauker Huddersfield are my new FM bogey team, I don't think I'll ever beat them. Thanks

Walter
6 years
Thanks Neal. Ince, well... shit. The goal vs. Bournemouth is still his only one to date.
Login to Quote 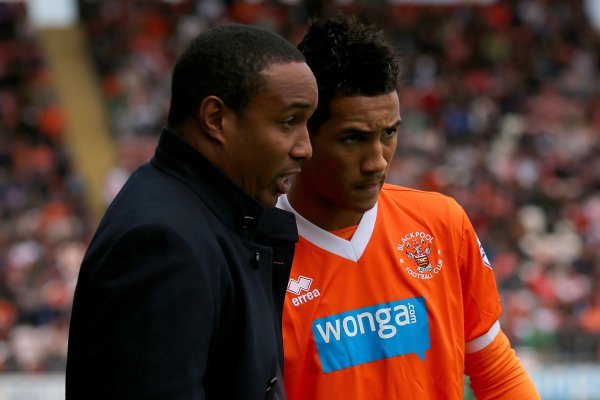 Has he been banned from his Playstation? Has he been sent to his room? I don't know, but what has happened to Tom Ince?

As a fan of the club I have grown fond of Ince Jr. in his time at Blackpool FC. And once I had arrived at Bloomfield Road I had immediately set out plans to make Ince the focal point of our play.

) and he suggested playing him on the left as an Advanced Playmaker. After that didn't work I decided to change the England U21 to a right winger cutting inside on to his favoured left foot, with the instruction of placing shots.

Yet this tactical shakeup has only gotten one goal out of our star player, one that can be largely attributed to Bournemouth's poor goalkeeper on the day. I decided to warn the player that he didn't have an indispensable place in the team, and he reacted well.

But he has yet to produce the goods still, and he wasn't given any luck at all in the rest of the month. Something is going to have to spark him in order for us to reap the benefits of possessing such a talent for this level.

One player who has impressed me greatly, however, is Nathan Delfouneso. The Villa loanee has shown he is an expert finisher and a true poacher. He is clinical and opportunistic in his play and has given us the goals that we have been deprived of by Ince Jr.

Marvin Zeegelar, however, has been the knight in shining armour. Replacing Ince on the left, he has become our top scorer and looks lethal in front of goal - enough form to keep him in the team week in week out.

October for us begins: a) on my birthday, and b) against rivals Bolton. A must win game not only for the fans but for me too. Gladly, though, I think we can come away with the win considering their league standing.