edu1878
7 years
Always Look on the Bright Side of Life! *Whistles Tune*. In all seriousness, watch "Life of Brian", you will never be the same again. While you're at it, you may as well watch "The Holy Grail", and you shall be the Walter who says NI!
Login to Quote


Seen The Holy Grail, biggest pile of shit if I be honest

Seen The Holy Grail, biggest pile of shit if I be honest

Zap If anything, it will be Charlton who will be ahead of me -_- Bloody FM

Come On Down To The Sea 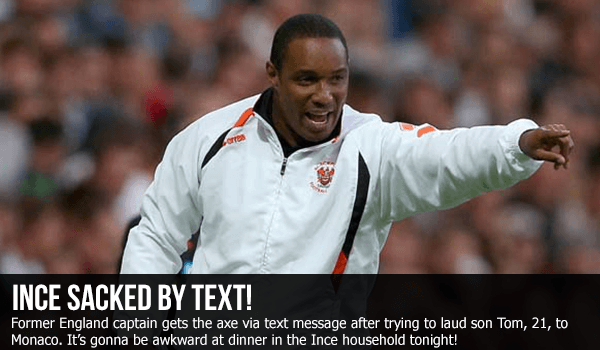 I don't really think I need an explanation as to why Paul Ince was sacked, do I?

I have come to Bloomfield Road as a relatively in-experienced person in the football world. Born in London and only 27, it's not hard to guess the fans aren't very pleased with Mr. Oyston's decision.

My first job down on the seaside was to win over the board and the playing staff, as well as the backroom team Ince Sr. left behind. I spent a meeting with Oyston, outlining budgets, expectations and he assured me I had the backing of the board despite my miniscule reputation.

I met the chairman, then my assistant and the rest of the backroom staff. After overlooking their abilities, I decided to let some go. It cost a little bit of money, but it gave me enough room to make improvements.

As you can see I let go of all the deadwood. Tony Warner was not up to scratch with being a first team goalkeeping coach. I thought he was more of an Under 18s ass man, but he seemed a bit bitter about being let go.

Jay Blake was not a natural talent spotter in my eyes, and I knew there were better fish in the sea, so I decided to mutually terminate his contract. Phil Horner and Alan Bent made up a less than comprehensive physiotherapy team and they were given mutual terminations of their contracts.

I also decided to let go of Head of Youth Development Richard Kyle. This is also because I knew I could find better options in the filters that were given to me.

I made sure to swiftly replace all these roles in the backroom and also add a little more if need be, especially on the scouts front - because I want to be picking up gems from all over the world.

I tried to avoid signing already employed personell to avoid paying compensation fees, but the lack of proper youth coaches made it a little harder.

The scouting, coaching and physio teams were vital in my eyes, so I made sure to fill my books up with them. Joe Corrigan was a much better GK Coach than Warner, and my new team of David Hamilton, Paul Montgomery, Barry Poynton and Barry Whitbread was hopefully a scouting system that will hopefully unearth a diamond in the rough. I also replaced the old HoYD with Nick Marshall and brought in two top quality physios.

Finally, the tactic. I want to play a nice passing game, controlling the ball but also pressing forward. I called it Tangerine One, and it gets the best out of the creative options we have up front. Hopefully I don't have to come up with a backup because I aim to use this all season.

Coming Up...
Early Business On The Seaside!
Login to Quote

Josh_MU
7 years
Very good update! And a great formation too! Hope it works for you!
1
Login to Quote

Aaron
7 years
Nice update, I'm liking the style of football! Keep the possession and be creative?:D
Login to Quote

Walter
7 years
Jason, Northwood, Jon Thanks you all, and welcome aboard

Lucas It isn't too attacking, is it?

Aaron You know it

Louis O.
7 years
I refuse to follow this since you just criticized Monty Python.
Login to Quote