The former 2013 MLS Superdraft pick Blake Smith has joined the Kickers for a fee of $195k. Smith made a total of 30 appearances in his two year with Montreal while scoring four goals. The midfielder is regarded as one who can control tempo as well as defend.

In other news three players could be departing the kickers to join clubs in the NASL. It has already been known that striker Stevens Koffie could be joining the New York Cosmos on a fee around $225k.

The Kickers return in late January for preseason as they look to defend the 2013 USL PRO title.
Login to Quote

No1VillaFan
8 years
nice signing! I look forward to seeing him win the league with you
Login to Quote


Damn 2014 was a good year for both me and my club. First I get a job with Richmond. That right there was very special for me since they are semi local and I have followed them for a long time. Mr. Ukrop made a big risk and it truly paid off. During the year I learned a whole lot about myself as well as the sport. Hopefully 2015 is just as successful.

The league was amazing going 21-3-0. The three draws were a little upsetting but at least we did not lose a game. The one thing I learned about USL PRO is that rosters seem to change all the time. I felt this was a bit strange but I finally figured out how to keep my guys. It sucks losing players to bigger clubs.

Finally during September and October I was invited up the road to coach with DC United. I learned a lot of new coaching skills that I will put into practice next season and better management strategies. It was weird though. I felt as if I was a good luck charm for the team. The team won four games during the time and I might have saved Olsen's job haha.

So with that 2014 was a great year, lets hope 2015 is even better. Hopefully I get a MLS job within the new year.
Login to Quote


RICHMOND,VA-(Wednesday, January 14,2015) Mike Korrigan and the 2015 Richmond Kickers Squads are pleased to announce the start of training camp. This year the team will be spending the next week in Virginia Beach to prepare for preseason. For this years preseason it will be split into two phases.

After the week in Virginia Beach is over the Kickers will start Phase One of the preseason. This will be a total of three matches between clubs in the Kickers System. Fans will have an opportunity to see the present and future of the organization face each other in a tournament that will last from January 26-30.

After Phase One of the preseason is finished the club will take a week off for rest and media availability. Starting the week of February 8th Richmond will prepare for Phase Two of the preseason as they will be traveling to Bradenton,FL to face three MLS clubs as well as our PDL partner Reading United.

Once Phase Two is over the Kickers will return to Richmond to prepare for the 2015 season. The first match in the 2015 USL PRO Season will be against Rochester on March 21st. The match will be played at City Stadium. All tickets for the preseason and the opener are available at the box office as well as on this web site.

Preseason Roster
As of today these are the players that will be featured for the Kickers during the preseason. With many returning faces the Kickers also welcome a buch of new faces that will help the club this season. We would like to welcome Blake Smith (Montreal), Devon Frederick (Colorado), Bryan de la Fuente (Orlando City), Chris Korb (D.C. United) and Taylor Kemp (D.C. United).

ATTACKERS:
Luke Lekics
Carlos Ruiz
Hunter Finch (U23s)
Dan Wright
*Roster is subject to change. All Roster moves will be reported to the USL when appropriate.
Login to Quote


RICHMOND,VA-It was another successful preseason for the Kickers as they gear up for Mike Korrigan's second season at the helm of the club. unlike previous years this years preseason was set up into two phases. Phase I was the Kickers Invitational and Phase II was the camp in Florida. As expected the Kickers had many good results and a few bad ones.

"It was a good preseason for the club, Having the two phases really helped med evaluate the talent in the Richmond System and I feel really good about the club in every shape and form."I feel we can once again run the USL PRO table and even make a major run in the Open Cup."-Mike Korrigan

As expected Korrigan's final roster was exactly the same as in the preseason with the exception of Ryan Hanson. The 18 year old goalkeeper from Richmond, California had a few good outings but was chosen to become the back up to Adam Street. Hanson joined Richmond after a pretty decent career in the San Jose Earthquakes system.

The Kickers now have the next few weeks off and will continue practicing. The first match of the season will be on March 21st against Rochester.
Login to Quote


RICHMOND,VA-(Tuesday, March 17,2015)- As we enter the second year of Mike Korrigan's management we are proud to finally unveil the new 2015/16 uniforms. As in previous years the club will go with a home, away and third. This will once again be the standard uniform for all levels of the Kickers family. HCA VA returns as the main shirt sponsor and will be featured on the Pro and U23 team shirts and for the first time the Academy. The shirts will be available to purchase on game day as well as the online store. The price will be $70 for replicas and $120 for authentics. 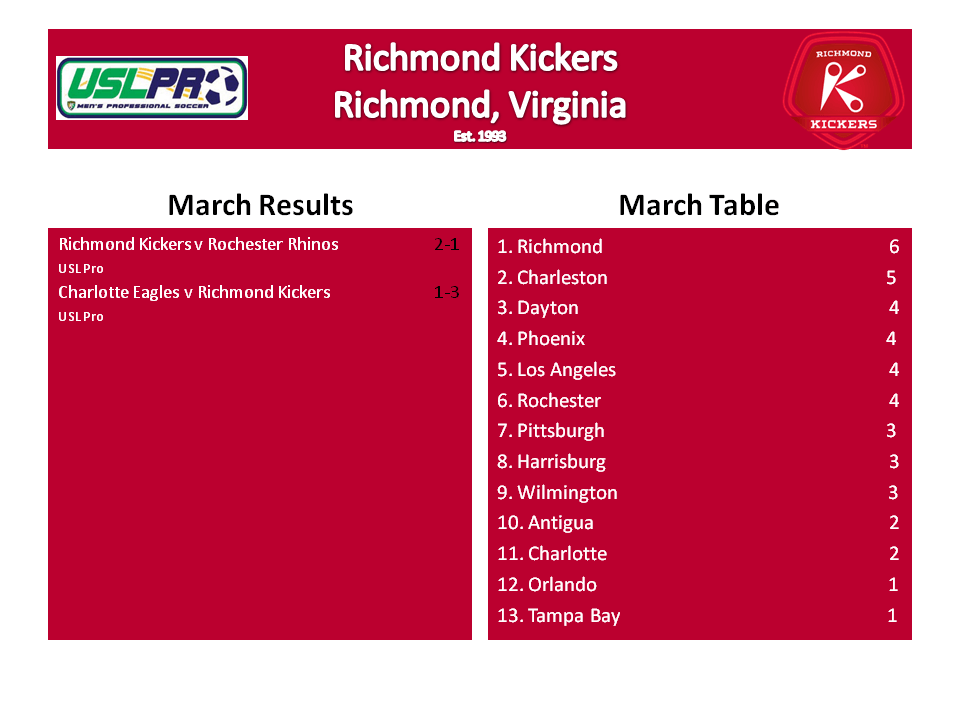 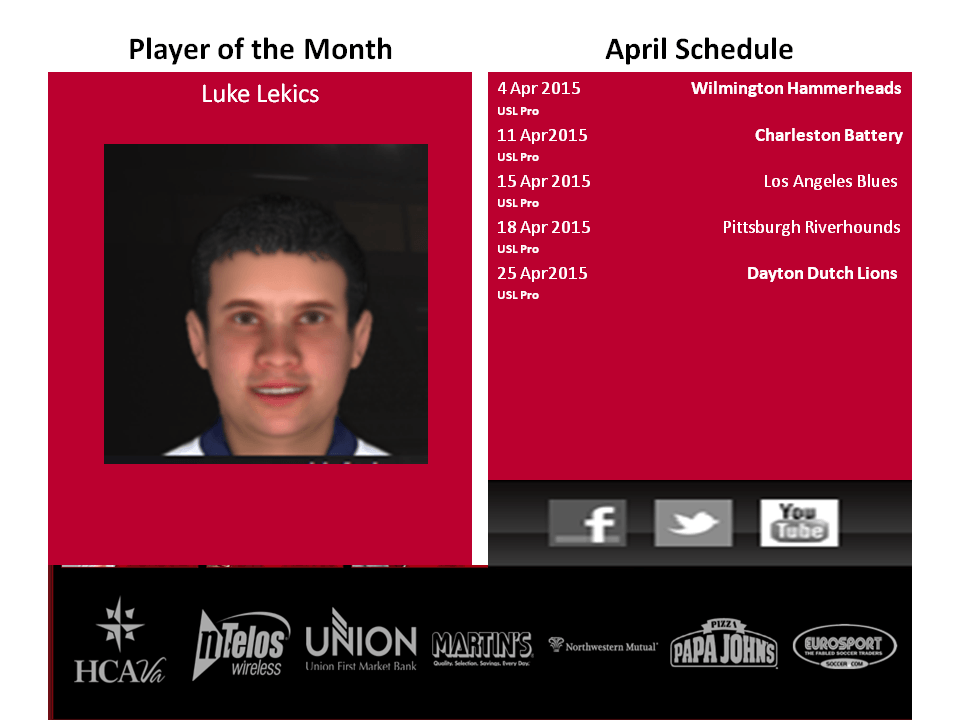 Not much to say since it is only the first month and we had two matches. I feel I have picked the right guys for the season and have u23 players ready just in case. Luke Lekics was the best player so far. He scored a goal with an average of 8.40 and four assist. The two later statistics are league leading.
Login to Quote

No1VillaFan
8 years
nice update and top as usual its now how far will you pull away!

pompeyblue
8 years
Nice kits and good start to the season!
Login to Quote

MJK46
8 years
Jason: Me too. Looking for ab ig run in the Open Cup

Pompey: Thanks!
Login to Quote 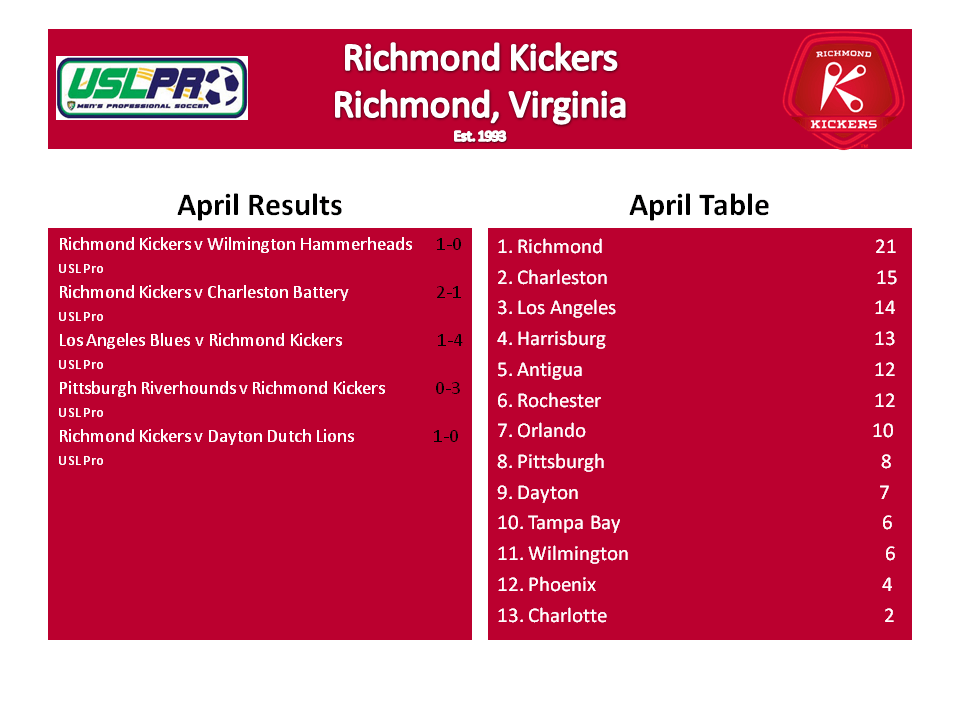 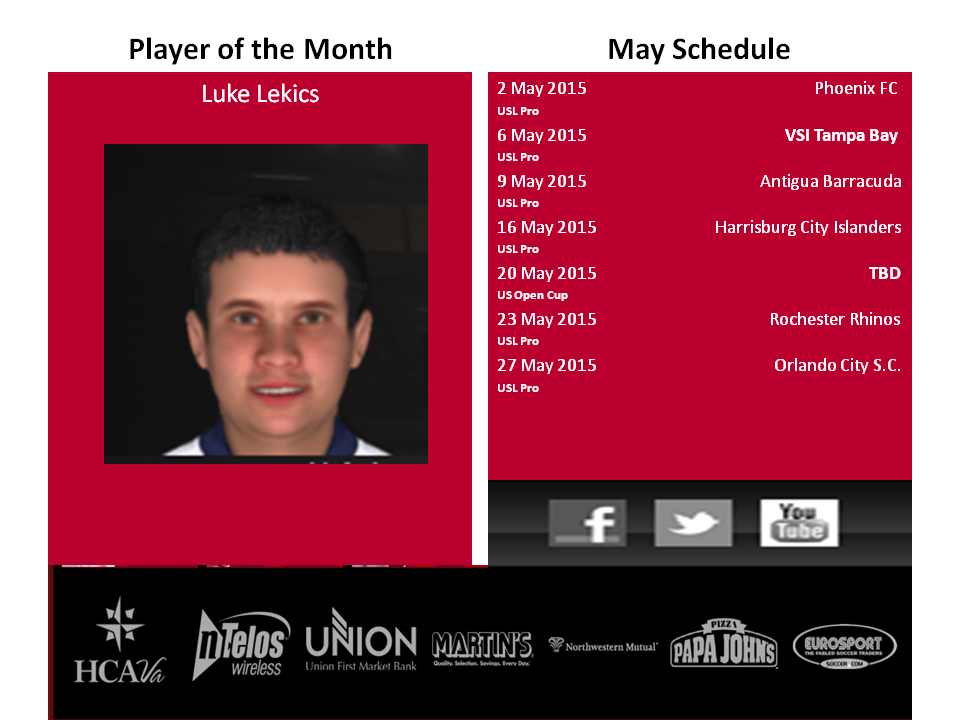 Another perfect month. It is looking like another great season since we are almost to the halfway point. The big thing was the draw of the USOC if we win our second round match we play Sporting Kansas City.
Login to Quote

No1VillaFan
8 years
DUDE! with results like this the MLS cant overlook you for long. I think you have already got this title in the bag again
Login to Quote