MJK46
7 years
Jason: Let's hope. If we win things will be crazy
Paddy: Yeah thanks. I hope I get a new job since I am going places.
Login to Quote

The Richmond Kickers have won their third straight regular season tittle. This time the club won it by going 24-0-0. Since Mike Korrigan took over the club has not lost a regular season game. With the playoffs coming Richmond is looking to get their fourth USL Pro Title.

Kickers striker Luke Lekics will go down as the best player of the season as he lead in the three major categories of goals, ratings and assist. "It was a great season and I thank coach for his trust in me"- Luke Lekics. The 18 year old just renewed his contract to stay at City Stadium until the end of 2019.

The next two moths will be busy for Richmond. They will be starting the playoffs off against Phoenix on the 22nd. After the USL PRO season is over the Kickers will have one more game to play.

At the end of September they will be in the US Open Cup Final against Portland of Major League Soccer. The Kickers are no strangers to the USOC Final. In 1995 the team won it in only their second year of existence.
Login to Quote

Richmond have repeated as USL PRO Champions after beating Rochester by a score of 2-0. Lekics gave Richmond the lead with an effort from inside the box during the 19th minute. It was an amazing effort by the league leader in goals. He be known as one of the most productive players in history. Defender Luis Javier Alanis scored the final goal of the match. With that the Kickers have won four USL PRO titles in their history. The offseason will not be starting yet because they will now face Portland in the Open Cup Final.
Login to Quote


On a windy evening at City Stadium the City of Richmond, Virginia would be in a celebratory mode as their home team made history. Richmond would be the second non MLS side to win the competition since the league was founded in 1996. It was a bumpy road for Richmond but they did it. MISSION ACCOMPLISHED!!

Things did not start off well for the Kickers as Portland's Ron Croft seized on an error by Devon Frederick to score from close range. Young Midfielder Dan Wright then equalized for Richmond in the 9th minute with a placed shot. Luke Lekics would score his two goals during the 14th and 21st to give the Kickers a two goal advantage and eventually the win.

Having witnessed their team's incredible run to the final and the victory for the first time in 20 years, Richmond fans are on cloud nine. After the match their supporters group were singing songs and did not leave the stadium parking lot until late. It was a sight to beholds ob this date.

"Words can not express how I feel about this victory, It was a great season for this club and from day one I had a feeling that this could happen."Later on Korrigan was asked about a possible return to the final next year he said."Well it's certainly possible but way to early to tell if this team will do it, the offseason will tell.

The 104th edition of the US Open Cup will begin next April.
Login to Quote 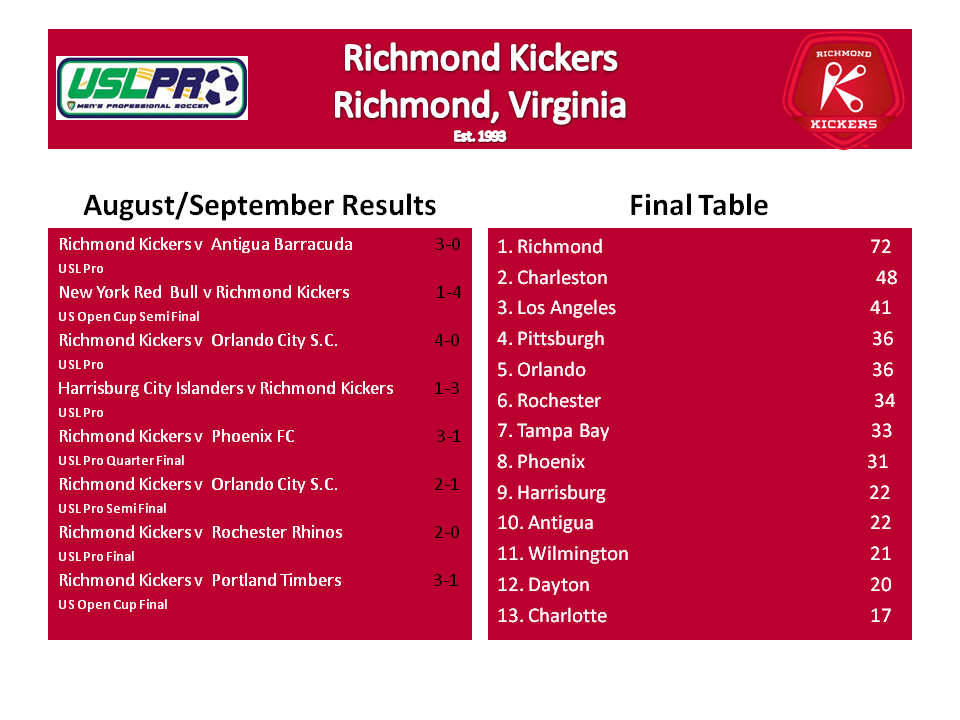 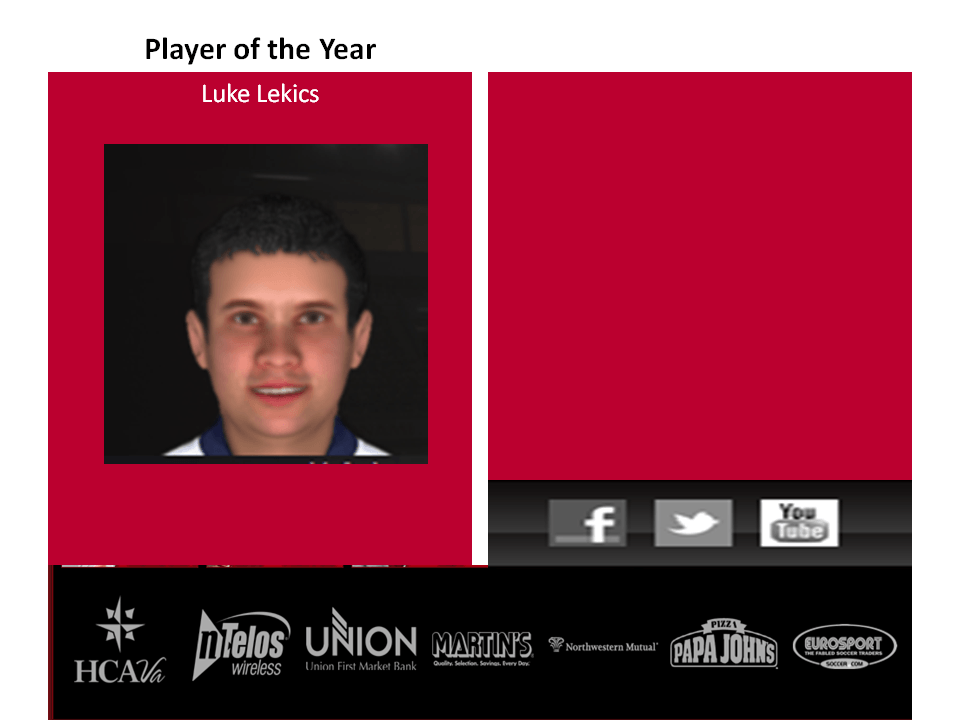 It was an amazing year for us. I can't believe we stayed undefeated in both competitions. Honestly I can't believe we won the Open Cup. Now the offseason is hear and 2016 will be very busy. Other than the league and Open Cup we get to play in the CONCACAF Champions League. I hope we will do well in that tournament. Anyways there are rumors of a new owner taking over this club. I hope if this is true he keeps me and will work with me.
Login to Quote

Kickers wrap up preseason in tribute to a legend

The Kickers have finally finished their preseason. Unlike previous years this one was lighter in the schedule as well as expectation. During this time the club went 1-1-2. Don't worry though Richmond still look strong and remember it is only preseason.

"A few of the results were a bit disappointing but it is only preseason, our two losses were both 0-1 so I am happy and remember we were playing some improved MLS squads." Third year manager Mike Korrigan.

But despite the record the fans got a special treat. Earlier today the Kickers played a tribute match to one of the club's longest serving players.

The Kickers paid tribute to Sacha Gorres in what was a 1-0 loss for the home side. In his 11th year with the Kickers he (Gorres) appeared in 195 matches.

Gorres' name might not be familiar to many outside of Richmond but the defender has been ever present for the club since joining in 2005. He will be retiring from soccer at the end of the 2016 season.

"Being apart of the Kickers has been an honor, I will remember my time with this club for the rest of my life, I am pleased that Mike (Korrigan) has had faith in me for the past two seasons. I look forward to another great year and hopefully another championship."- Gorres after his testimonial match

The team will now have a month off before the 2016 USL PRO Season begins. The first match will be played on March 19th at the Stanford Crick Ground in Antigua. The first home match is set for March 23rd as the Pittsburgh Riverhounds come to town.
Login to Quote To start out the year 3-0-0 is good. The team right now is still playing at that high level and i do not expect it to drop anytime soon. Lekics is still one if not the best player. Right now he leads the league with three goals. Other than that things are great in Kickers Country.
Login to Quote

Richmond win after two goal comeback and other news


Goal Friendly Phoenix FC suffered a 3-2 defeat against the home Kickers on a breezy evening. Just like in the last few years this match up lived up to the hype.

Striker Brad Clements gave the visiting club the lead with a beautiful finish during the 14th minute. Richmond would respond thanks to a goal by Douglas in the 29th minute.Clements then added his second during the 39th.

Richmond would have to find a way to respond to this deficit. Feijao would kick off the comeback at the start of the second half. The winner came from Luke Lekics as he seized on Mike Zaher's mistake to score the penalty.

In other news goalkeeper Jay Nolly has been shipped off to Orlando City for an unknown fee. Nolly joins his hometown team after spending the last few years in Richmond where he had 39 appearances. Lack of playing time and the addition of Mexican Goalkeeper Rafeal Ramirez were the reasons for his departure.
Login to Quote

nice comeback i bet your heart was in your mouth


Not really just was hoping my streak would stay intact.
Login to Quote 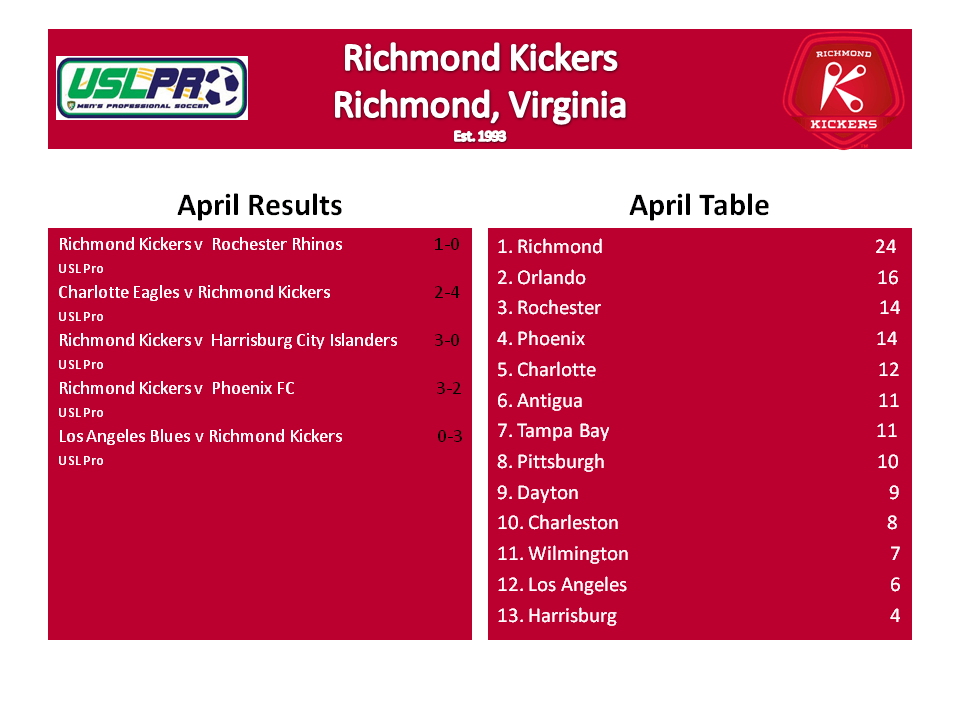 It was another good month. A few matches were very close and I was worried the streak would end. Next month we get to kick off our defense of the USOC!!
Login to Quote