MJK46
6 years • Edited
In 2013 the sport of soccer has became bigger and bigger in the United States. Overshadowed by the major European Clubs and Leagues a group of men look to change that.

One such person is 26 year old Mike Korrigan. He is an unknown in the world of soccer but is looking to change that. Korrigan is a young ambitious person who is looking to not only improve himself but the nations attitude towards the sport. Along the way he will make friends ,enemies and break the hearts of hundreds. Will he have what it takes to crack the top in the world's most popular sport or will he fail?

These are the adventures of an American soccer coach. His mission: to boldly go where no American has gone before.

PART I:NORTHERN VIRGINIA FC: Where Nobody Knows My Name

Louis O.
6 years
Ooh, new story! Hope you've got all the problems fixed so this one goes all well

MJK46
6 years
POMPEY: Cheers man
LOUIS: Thanks it is ready to be awesome
Login to Quote

No1VillaFan
6 years
I hope this goes well for you


I feel like having a personal log (journal) would be a pretty good idea since I want to log and track as much as I can in my professional soccer coaching journey. Hopefully if I become successful I could release these in some sort of book or memoir. This is my first entry so whoever sees this someday please do not shy away.

For the past few months I have been extremely busy having to balance two jobs at once. The first being the head coach at my local high school and the second the head coach for a local travel squad. I have been in charge of the high school since finishing college a year back and right now in the middle of my third year with the travel squad. I have interned and coached them during the summer months while I was at school six hours away.

Well a few weeks ago I was approached by another local soccer club. The team is the Northern Virginia based out of Woodbridge. Their owner called me up to offer the vacant job opening for head coach of the professional team. Boy I was shocked at that since I am committed to my current employer. He told me about the teams goal and vision that has been in place since 1998. After a few days I accepted the job. This will be a great opportunity since I have wanted to coach a professional team.

The biggest issue is that the previous manager Abe Thompson lead the club to a season where they went 9-1-0. I will have a ton of pressure on me this season as I try to get this club their second league title. I will do something that Abe was not able to do.. Win the PDL Playoffs. I will not leave until I reach this goal. For this team not to lose a league match but fall flat in the playoffs is very odd. Below is a picture of the 2013 season.

For some stupid reason the USSF decided to put an age limit for head coaching from the MLS-USL PRO. In order to become a head coach in one of those leagues I have to be 30 years old by the time the season starts. Well that kind of sucks but not a problem. I signed a five year contract and I have to at least stay for three out of the five years. If I am successful by the end of year three, I might have a chance to move up. For now the NOVA Royals are perfect for me.

Call me stupid, naive or just plain crazy but I am so excited. My goal is to become the greatest head coach in American soccer history as well as the best in the world. It will take time but I know damn well that it is NOT IMPOSSIBLE. I feel that within the next 20 years the United States will be the place to be in the sport.

Now I am getting ready to start my job after the new year. Travel will not be a problem luckily since I am about 30 minutes away from the headquarters. 2014 will be a massive year in the PDL as it celebrates its 20th year of operation.
Login to Quote

a_esbech
6 years
I've been browsing Reddit too much as I was looking for the upvote button. Good stuff!
1
Login to Quote


Thanks man. I hope you enjoy.
Login to Quote

The Premier Development League is a branch of the USL that focuses on the development of soccer players in the United States as well as Canada. It showcases many different teams including U23 sides of MLS and USL PRO sides, professional clubs and Semi Pro clubs that cater for the NCAA Student Athlete.

Due to the fact it is mostly for college soccer players the league is much shorter from the rest in the United States and Canada. There are a total of 64 teams that consist of nine divisions. Each team gets a chance to play around 10 matches before the top two of each division get a chance to play in the playoffs.

The league starts around Mid May and runs until July. After that the playoffs begin. There are two parts to the playoffs. First being the regional playoff. This is where each of the four regions (N,S,E,W) top teams face off to see who will face off in the semi finals of the champions of each region. After the semi final is decided there is the final. Whoever wins that is the champion of the USL-PDL. The champion is crowned around Mid-August.

Example of a division:

Past Winners of the PDL Playoffs:

Happy Birthday to me!! Today I turn the age of 27 and damn I can't believe I am three years away from 30!! It is crazy how much time has flown by. Get to go out to a nice restaurant tonight with my lady. It is going to be nice to get away from soccer for awhile. We have been together for a few years now so I am very happy. She is flying into Dulles later this afternoon so for the past few days I have been scrambling to clean my place up HAHA.

So now back to soccer the most important part obviously. I have been busy working on a bunch of camps for the youth as well as working with upper management on ways to improve this club and its stature in the US. We will be having many camps between February and May as well as after the PDL season from August-November. I hope this will help the club grow. Other than many local youth clubs are biggest threat is D.C. United and their vast youth/scouting range in the Capital Region. Unlike NOVA they have a very well known name.

Well it is going to be a boring month and a half before the team gets back for the season. I am excited for this year and I feel we could make some noise. The thing about the PDL is that the higher division clubs will sign our best players in July. This hurts especially during a playoff run. I wish the USSF would have some sort of rule that players can't sign contracts until the end of their PDL club season.

This will be my last personal log for a while as I get ready for the season. Soon I will be writing my managers logs as I focus solely on my coaching and the team.
Login to Quote

With the league title the Royals will once again will participate in the Lamar Hunt US Open Cup. At this point the opponent has not been decided. The draw will take place on April 28th. The club will be entering the first round on May 14th. Stay tuned for more information on the draw as time gets closer.

Preseason will once again be set in two stages. The first are two games during the late February early March part of the season. NOVA was invited to Phoenix, Arizona for this portion of the preseason. The club will be facing PDL club Baltimore Bohemians, the match will be played at the NOVA FC indoor practice facility. The other match will see the Royals travel to face USASA Affiliate the Arizona Sahuaros.

After a few weeks away the club will return to Hellwig Memorial Field in their final three preseason matches before the season begins. All three teams are local so this will be an opportunity to showcase the NOVA FC brand throughout the DC-Baltimore region. All matches will be open to the public at no cost.

The season kicks off on May 10th as the Southern West Virginia King's Warriors come for a visit. On June 21st we will be hosting Youth Soccer Night as instate rival Richmond faces off. Kickoff is scheduled for 3pm. Finally on July 19th the Carolina Dynamo will come to town on the final match day of the season. This will be fan appreciation night. See below for ticket information. 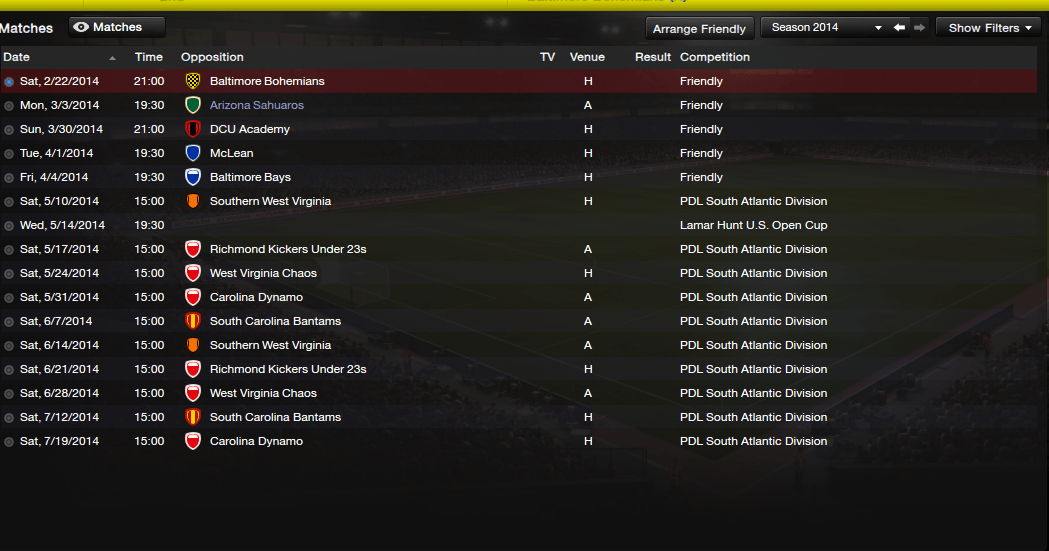 You are reading "To Boldly Go Where No American Has Gone Before".