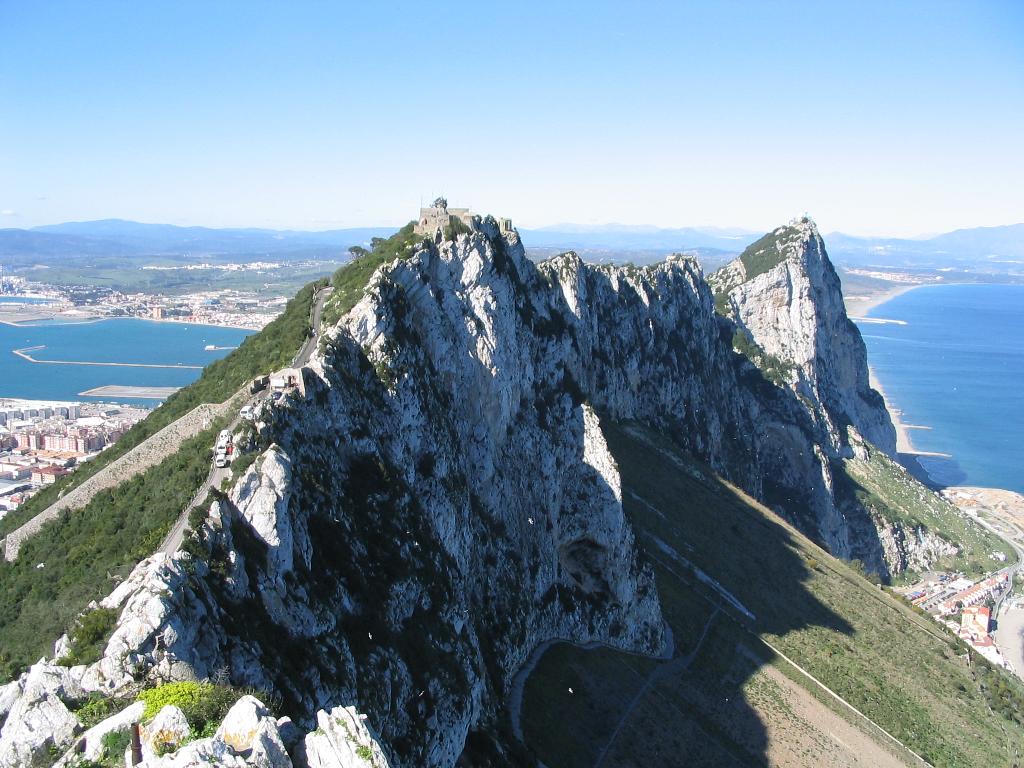 The application was approved on a majority vote at the organisation's congress in London, with no votes against and no abstentions.
The British Overseas Territory off the south coast of Spain has a population of just under 30,000.
Gibraltar will be allowed to enter qualifying for the 2016 European Championship.
The territory tried to join Uefa in 2007 but the bid was controversially rejected. Spain opposed the move and threatened to boycott both club and international competitions if it succeeded.

Only three of Uefa's 52 associations voted in favour of Gibraltar - the English, Welsh and Scottish Football Associations.
Previously Gibraltar, which has six top-division teams and 600 registered senior players, had been told it could not join Uefa as it was not a country recognised by the United Nations.
It was accepted as a provisional member of Uefa in October 2012 and that membership has now been ratified.
Spain continues to claim sovereignty over the territory, which has been ruled by Britain since 1713 under the terms of the Treaty of Utrecht.
The European Union has put pressure on Spain and Britain to resolve the issue of Gibraltar's status. Both sides, under the Brussels Process launched in 1984, have attempted to reach an agreement.
But Spain's insistence on eventually acquiring full sovereignty, and Britain's determination to retain full control of Gibraltar's military base, have been among the stumbling blocks.

Uefa president Michel Platini has confirmed that Gibraltar and Spain will be kept apart in qualifying groups.
"Gibraltar will not play qualifying matches with Spain - we also have this situation with Armenia and Azerbaijan," Platini said.
"This is a momentous occasion for football in Gibraltar. Uefa membership means that we can begin the next chapter of Gibraltarian football," the president of the Gibraltar Football Association, Gareth Latin, said.

Gibraltar becomes the smallest Uefa member in terms of population, behind San Marino (just over 32,000), Liechtenstein (approximately 37,000) and the Faroe Islands (just under 50,000).
Login to Quote

BaggiesJames
8 years
Oh well, it's my story and i thought i could do that for it. I'm looking for a BBC Sport Banner to include at the top so yeah
Login to Quote

Cameroncox96
8 years
YEEESSS finally a Gibraltar story, will surely be following this one 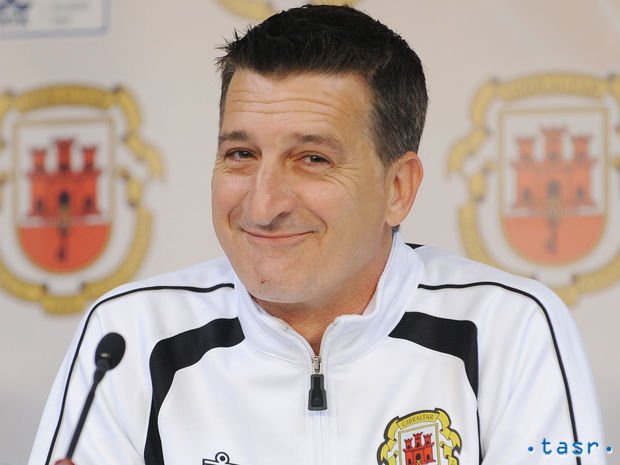 In what has been a shock turn of events, the Gibraltan national team have sacked their manager Allen Bula after it was revealed he was recorded telling ‘business associates’ that he thought the colony should not be given full UEFA membership. Bula told the people he met that the Gibraltan national team were simply not good enough to play against a group of 10 year old kids, and that there is no way in hell that they should be allowed UEFA membership as it would just be a complete waste of time to grant them a membership as they are not even a country, just a British colony in a tug of war between Britain and Spain.


Gareth Latin, president of the Gibraltar Football Association (GFA), released a statement on twitter earlier this evening regarding the situation: 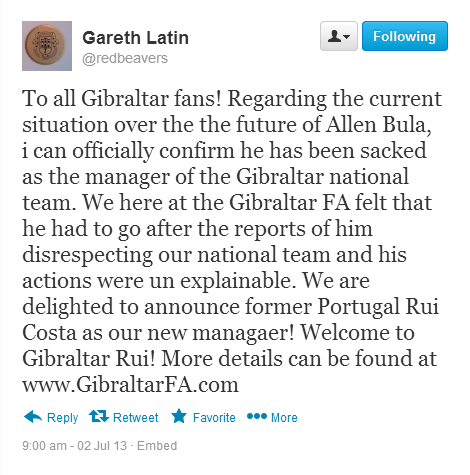 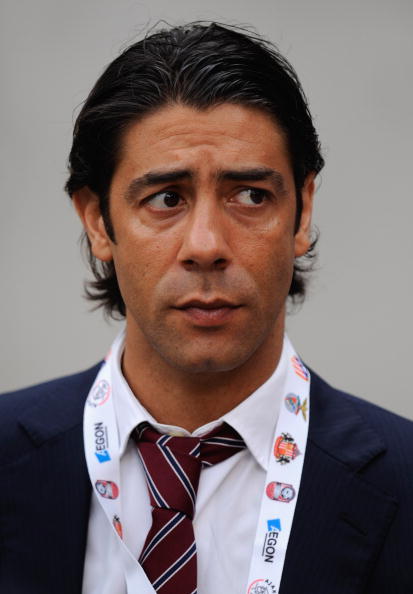 Rui Costa has been officially appointed the new manager of Gibraltar on a 1 year rolling contract worth around £140 per week, and it’s said that the reason he has been given a rolling contract is because the team is mainly full of part time footballers , and it’s not known if he will want to leave before or after the 2016 European Championship qualifiers so the Gibraltar FA thought a 1 year contract was best.

The former Benfica midfielder has told Sky Sports that he is excited at the prospect of managing the newly formed national side and believes his side can slowly rise the rankings, “Well to be honest, I didn’t expect to get a call back from Gareth (Latin), I got my agent to indicate my interest in taking over the possible role of manager and when I received an E-Mail saying I had got the job I must say it really took me by surprise. I’m not going to say any targets because quite frankly, I don’t, I will evaluate the squad and players available to me, and take it day by day to prepare for our first friendly. I’m really glad I got the job, maybe I could even move into club management in the near future, but for now, Gibraltar is my main focus, so hopefully we show fighting spirit in our first game.” Costa won 94 caps for Portugal, scoring 26 goals, and managed to firmly secure his place as a legend for his country. The 41 year old had stepped down from his director’s role at boyhood club Benfica, where he enjoyed two spells during his illustrious career.

His first spell as a professional was in 1990, when he signed professional terms with Benfica and went on to score 13 goals in 78 games before leaving the club in 1994, and during this spell he enjoyed a loan spell in 1990-1991 with Fafe scoring 6 goals in 38 games. He then moved to Italian side with Fiorentina, where he stayed at until 2001 scoring 38 goals in 215 games, before leaving the club due to their financial problems. Costa stayed in Italy for another 5 years with AC Milan, where he made 124 appearances, scoring 4 goals. In 2006, the Portuguese then moved back to his homeland for a second spell with Benfica, scoring 5 goals in 43 appearances, before retiring in 2008 to move into a directors role with the club he started and ended his career with.
Login to Quote

JasonRM
8 years
Good Luck mate, I'll give you a cookie if you win the WC!

Thanks mate! I'll never be getting that cookie though as Gibraltar don't have full FIFA membership to compete in the WC
Login to Quote

therovers
8 years
Good luck mate! I would sign Scott if I have a chance

who's Scott?
Login to Quote

Sorry for the short name. I mean Scott Wiseman

BaggiesJames
8 years
He's quite good for the national team, one of the best two defenders
Login to Quote