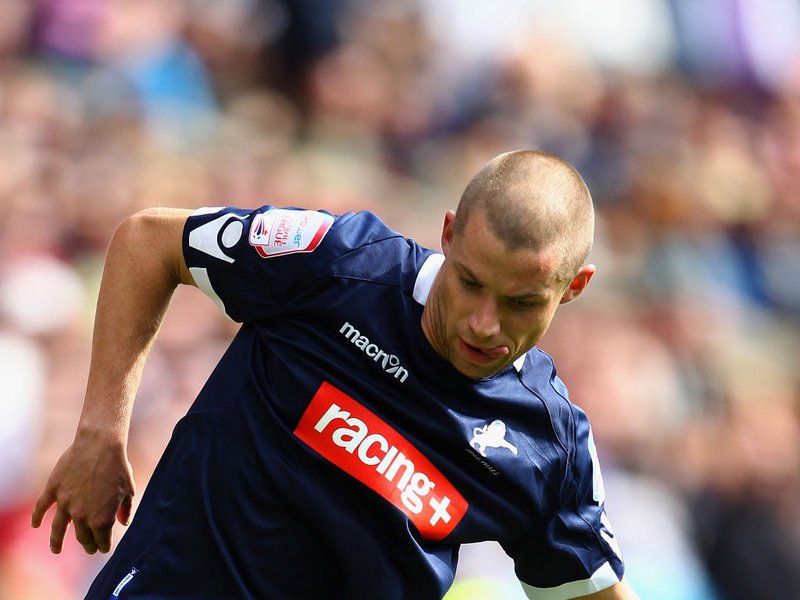 Swindon Town manager Rui Costa has signalled his intent on lifting Swindon away from the drop zone by bringing in nine players over the course of November. Costa sat down with chairman Lee Power soon after he joined the club to discuss transfer targets he felt he could bring in to help the club climb the table and to start picking up vital points. Kenneth McEvoy, Zack Kotwica, Jordan Turnbull and Alan Dunne all joined the club on 3 month loan deals. McEvoy, 19, is an attacking midfielder who can play on either wing,and joins us from Tottenham Hotspur and has been brought in to provide cover for the clubs current wingers and also to challenge for a place in the first team. Kotwica, 18, has joined us from League 2 side Cheltenham and can also play on either wing to provide cover for the first team. Turnbull, 19, has joined us from Southampton and will provide cover for the centre backs, as that is one of the our weakest areas in my opinion. Dunne, 31, has joined us on loan for cover at right back from Millwall, but to be honest, has a good chance of making the first team if Nathan Thompson is not performing well.

A number of other players have also been released from Swindon as Costa looks to trim the squad and free up wages by releasing the dead wood to be able to afford extra players.

bebero
8 years
Good luck Swindon !
And wait to see what you bring to the team.
Login to Quote


thanks:) And you'll be seeing what i bring to the team in the next update
Login to Quote 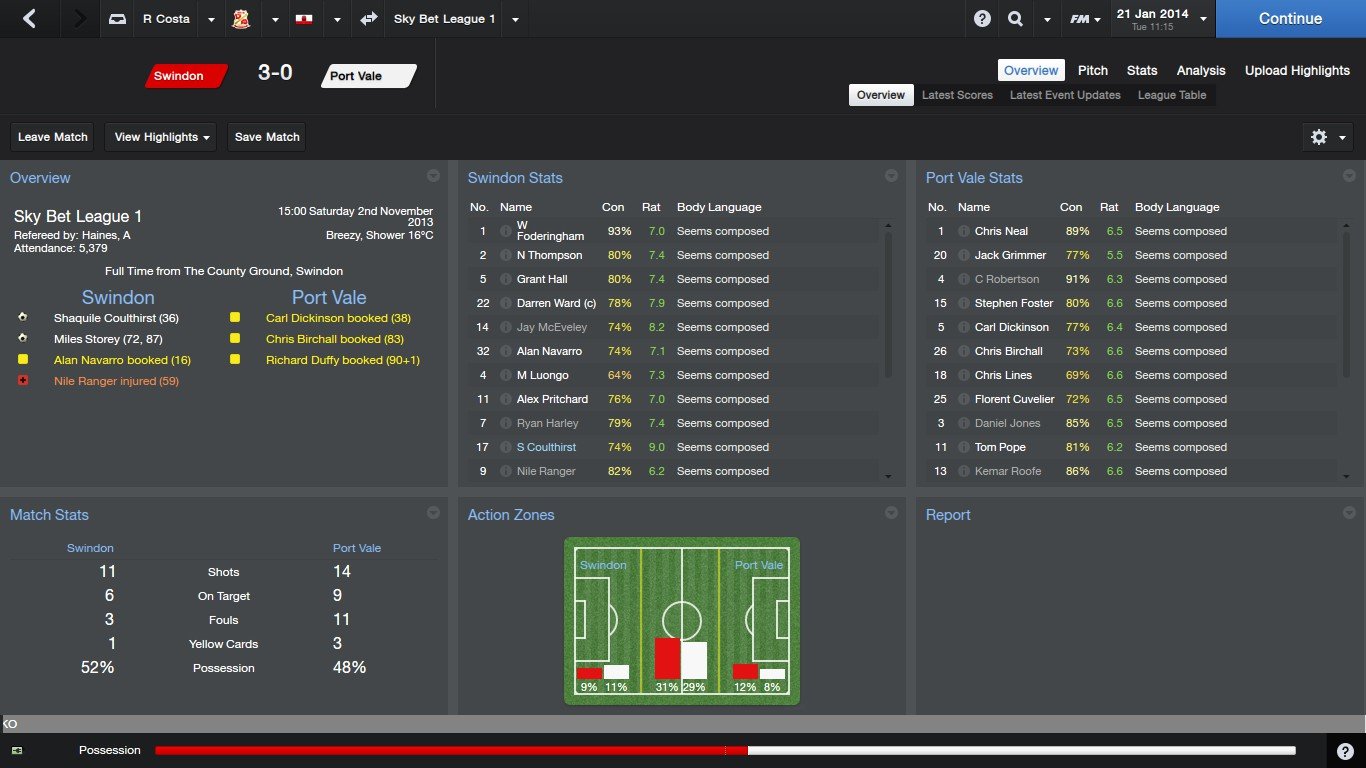 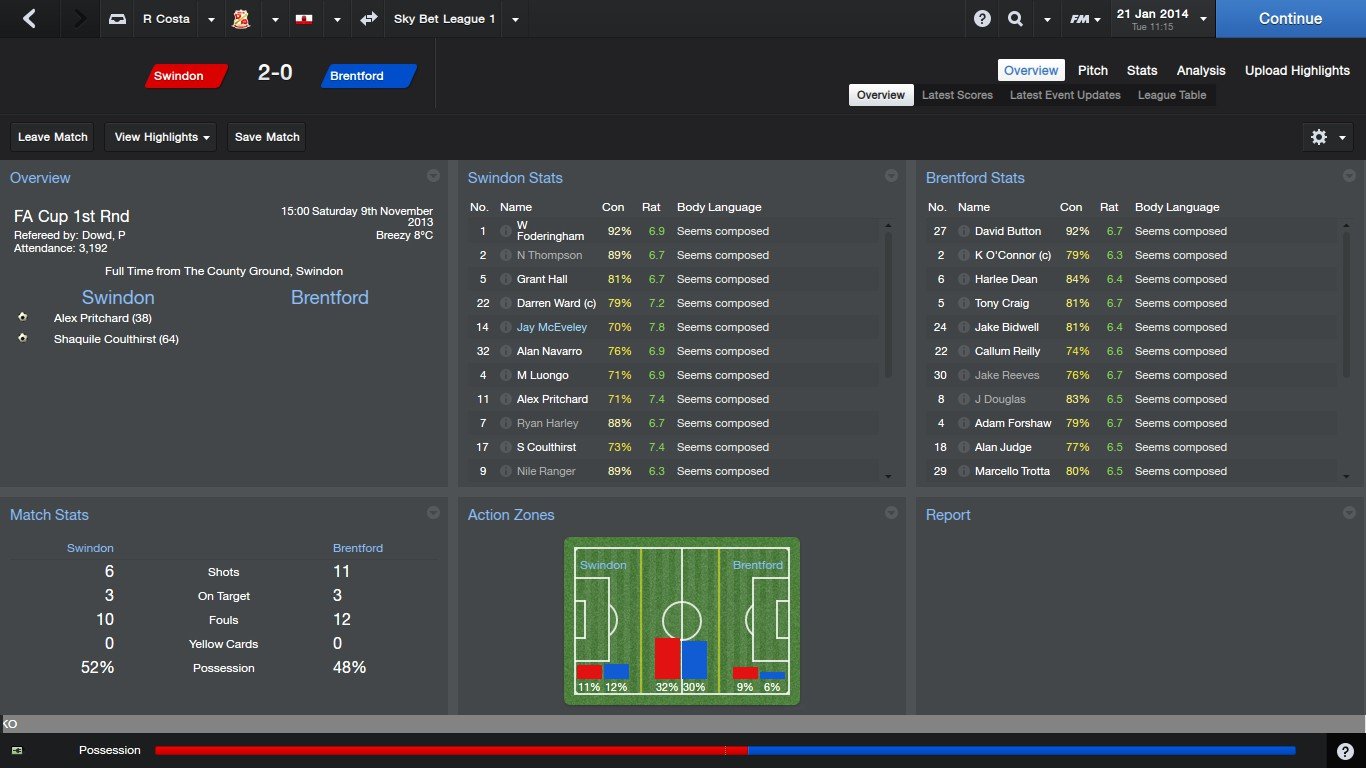 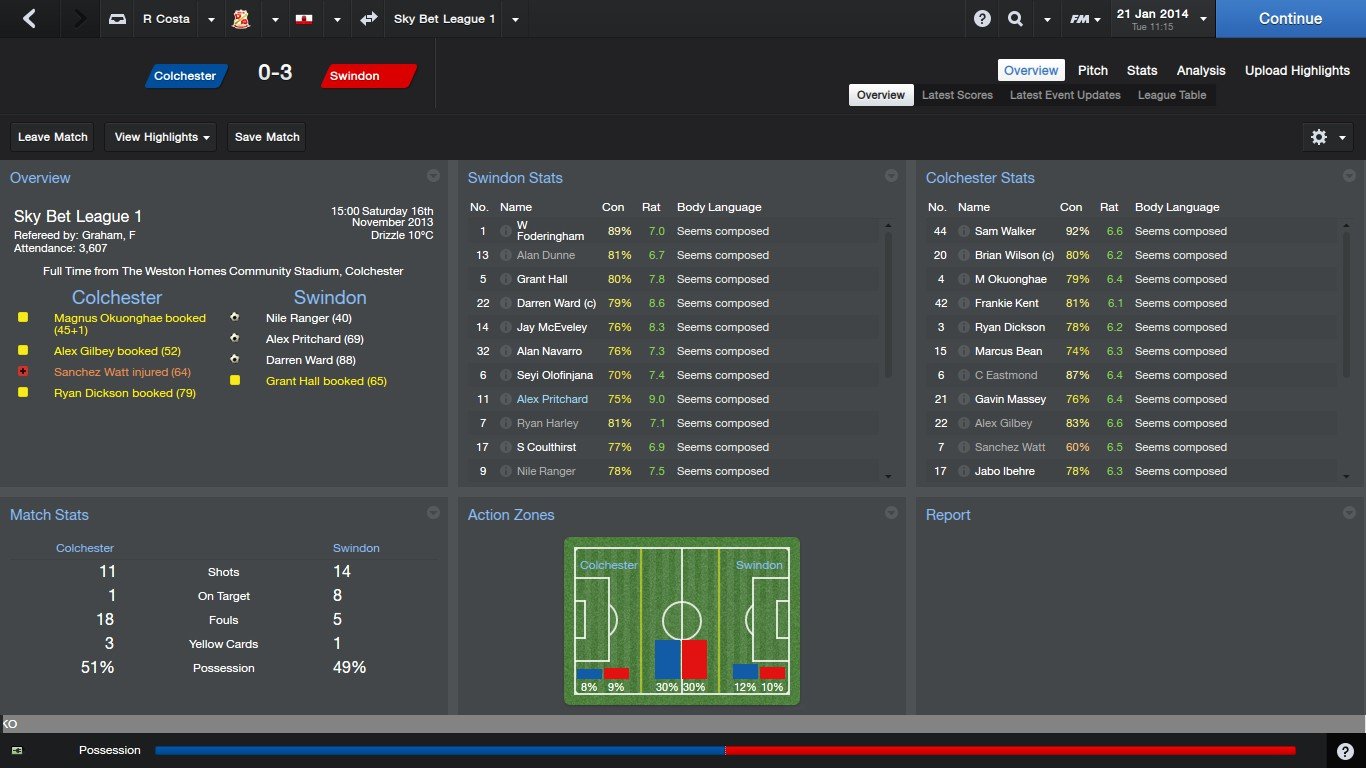 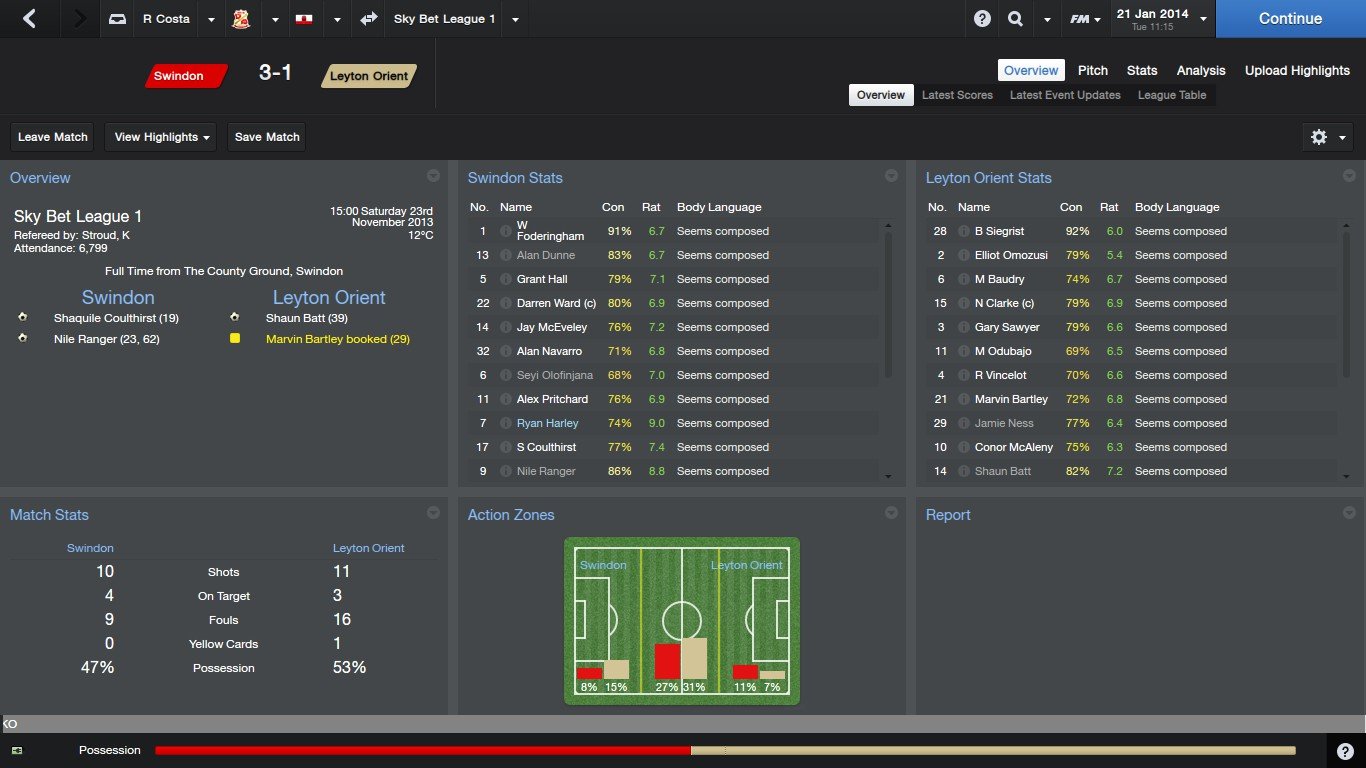 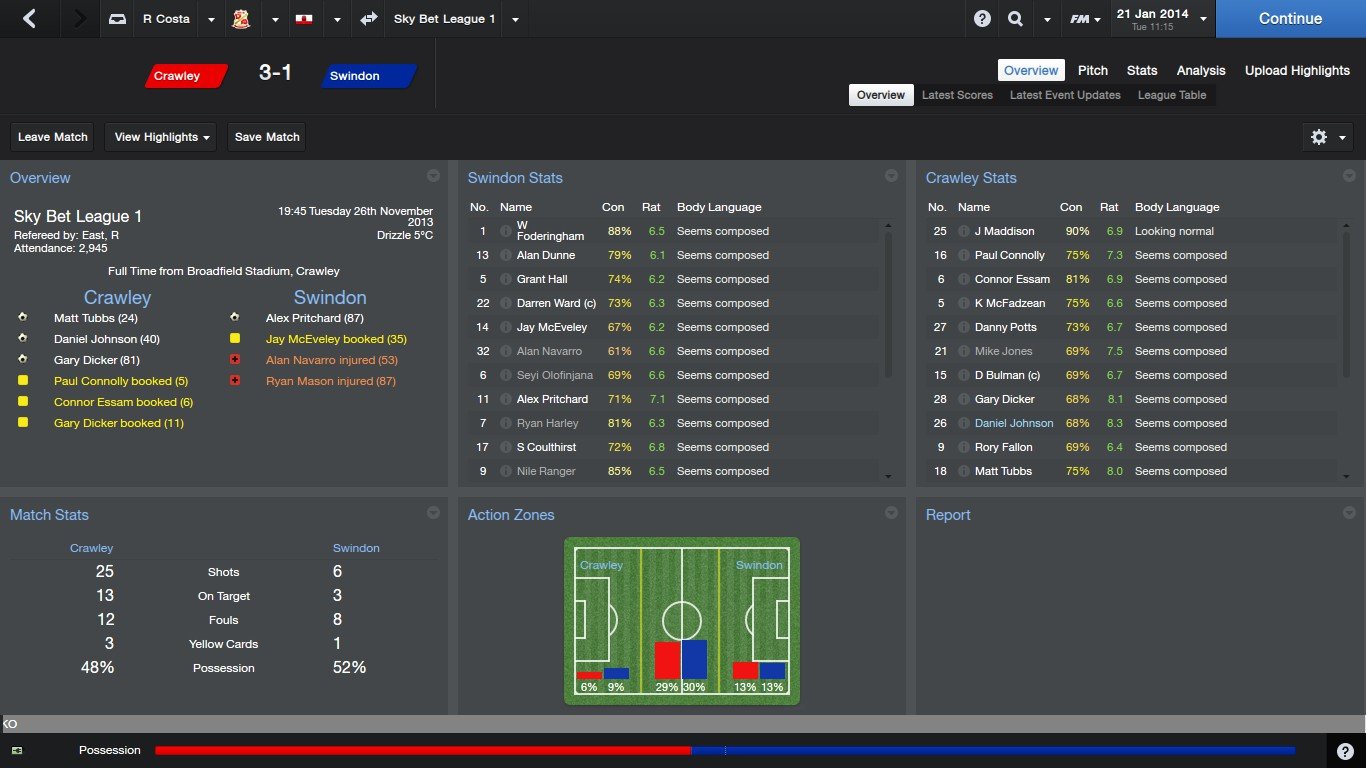 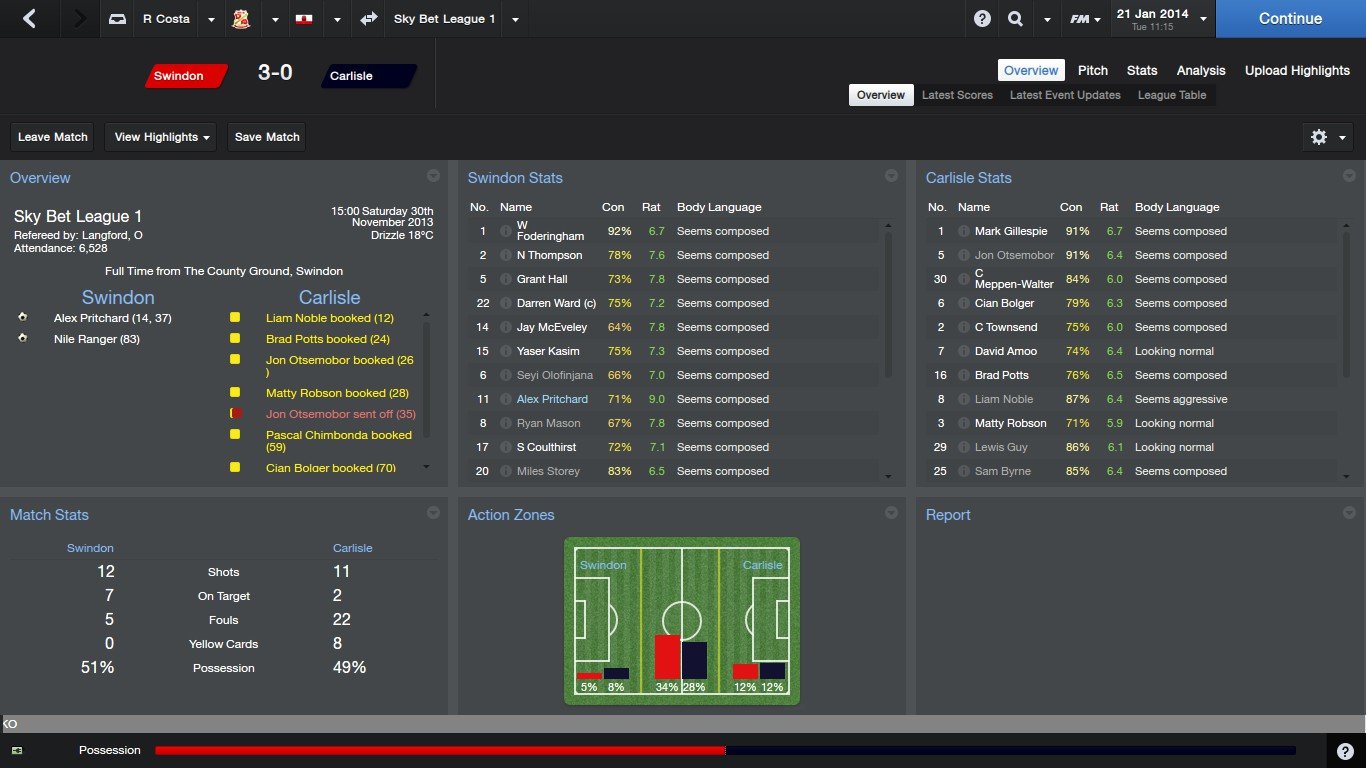 Swindon's Player Of The Month: Alex Pritchard - This young man really impressed me this month, 5 goals and 2 assists, so I have no reason why he cannot lead us to a play off charge. I will definatley look into signing him on a permanent basis at the end of the season, League 1 or not. 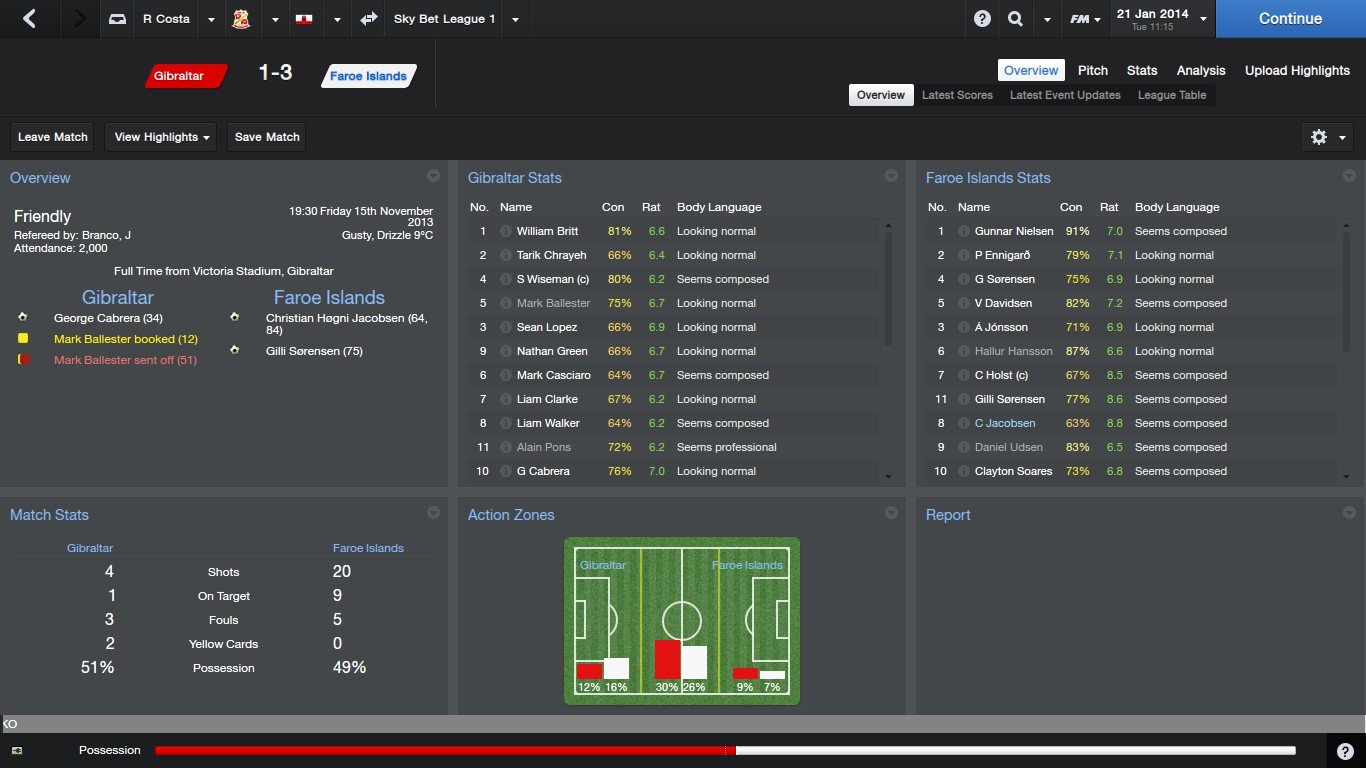 Costa's View: These two friendlies were not that bad to be honest. The game against the Faroe Islands i didn't expect to win, as even though they were normally Europe's wipping boys, they would still be tough opposition. The game against Andorra was one where i would only target a draw, so to win the game was a huge surprise me. To lose 6 games in a row, with most of them at home, and to then win, it was quite a delight. Hopefully we can claim a win over our next opponents, San Marino, who we play in 2014.
Login to Quote

bebero
8 years
Very good matches, have managed to score a lot in Swindon. Good Luck! A very good win against Andorra and, congratulations, good luck with the national team.
Login to Quote

BaggiesJames
8 years
Thanks:) Was good results with Swindon, just really annoyed at certain games with the team, and i know, rare win:)
Login to Quote 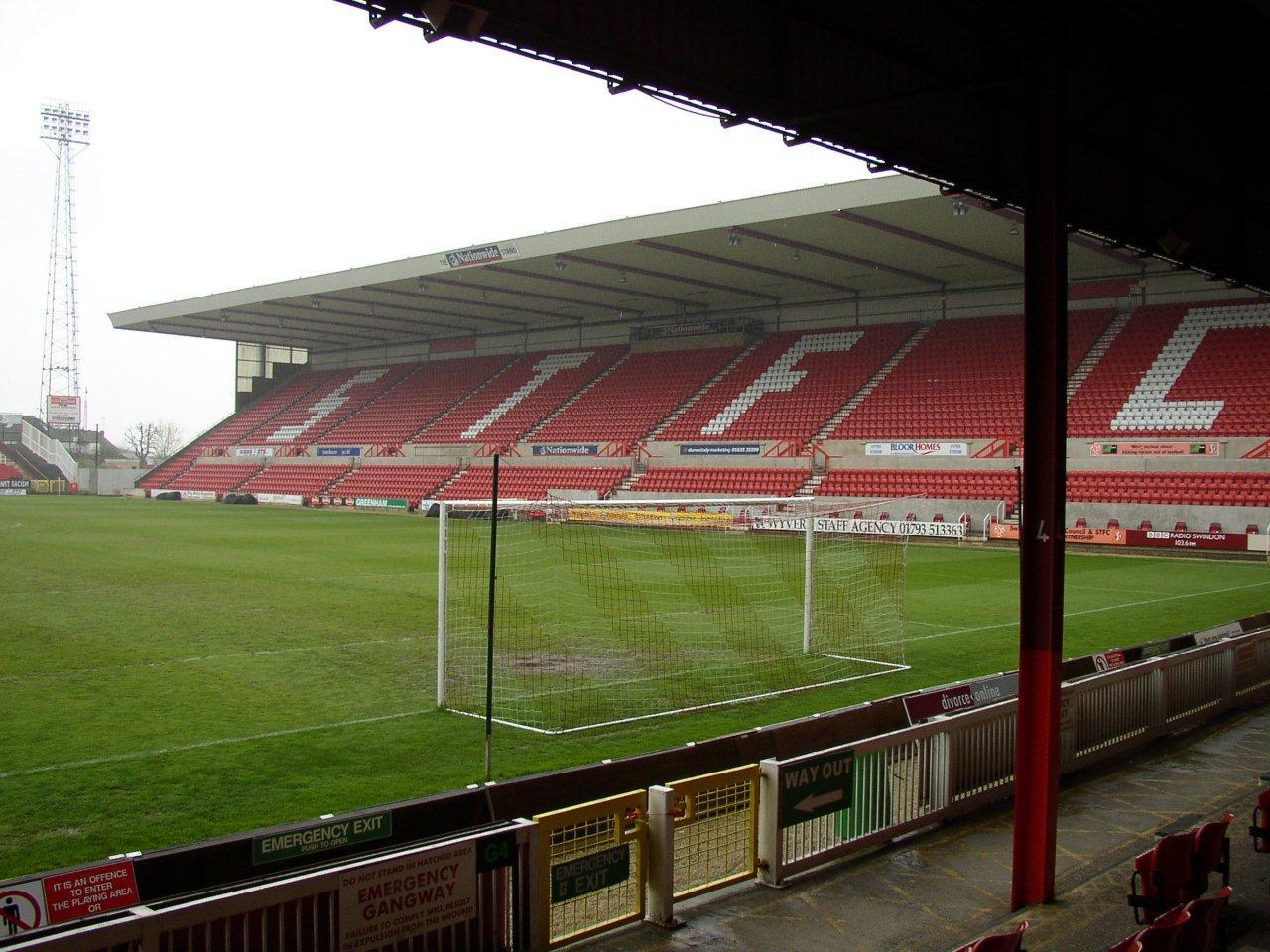 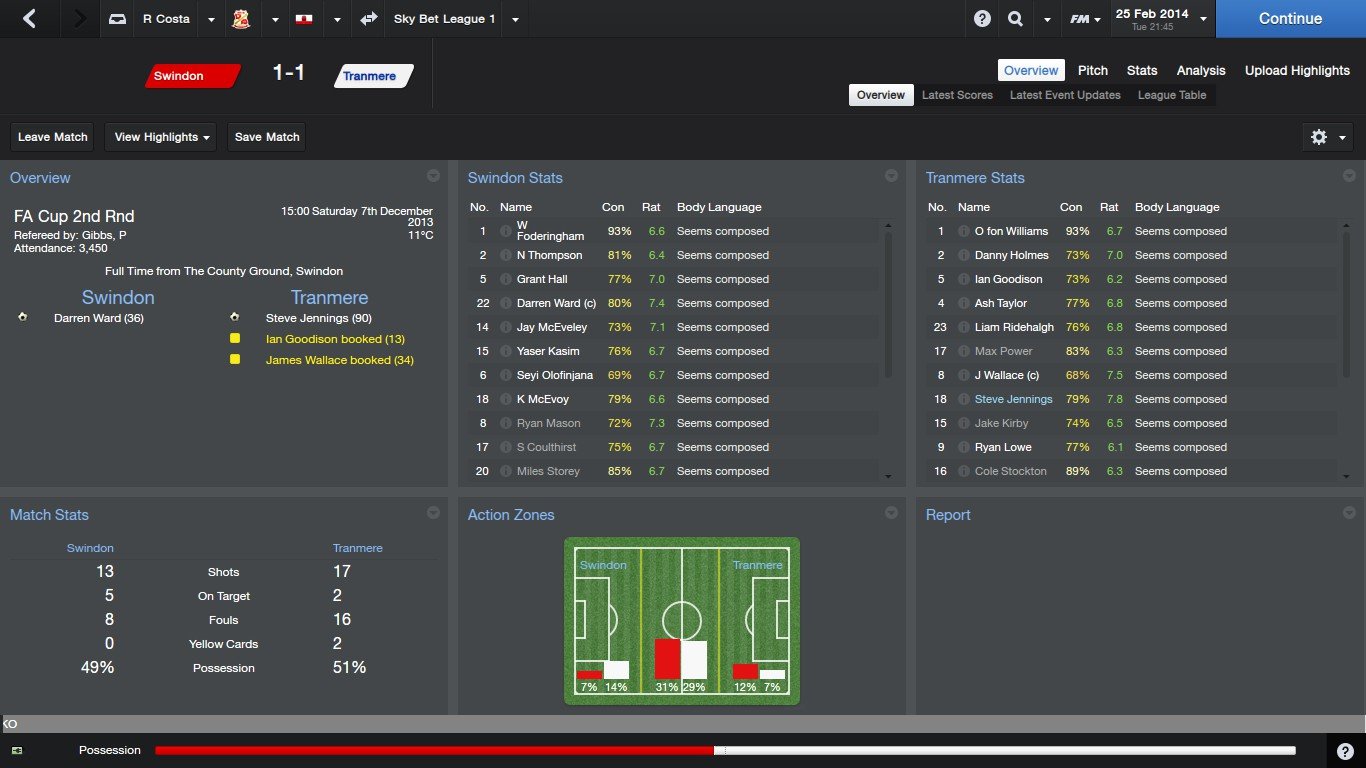 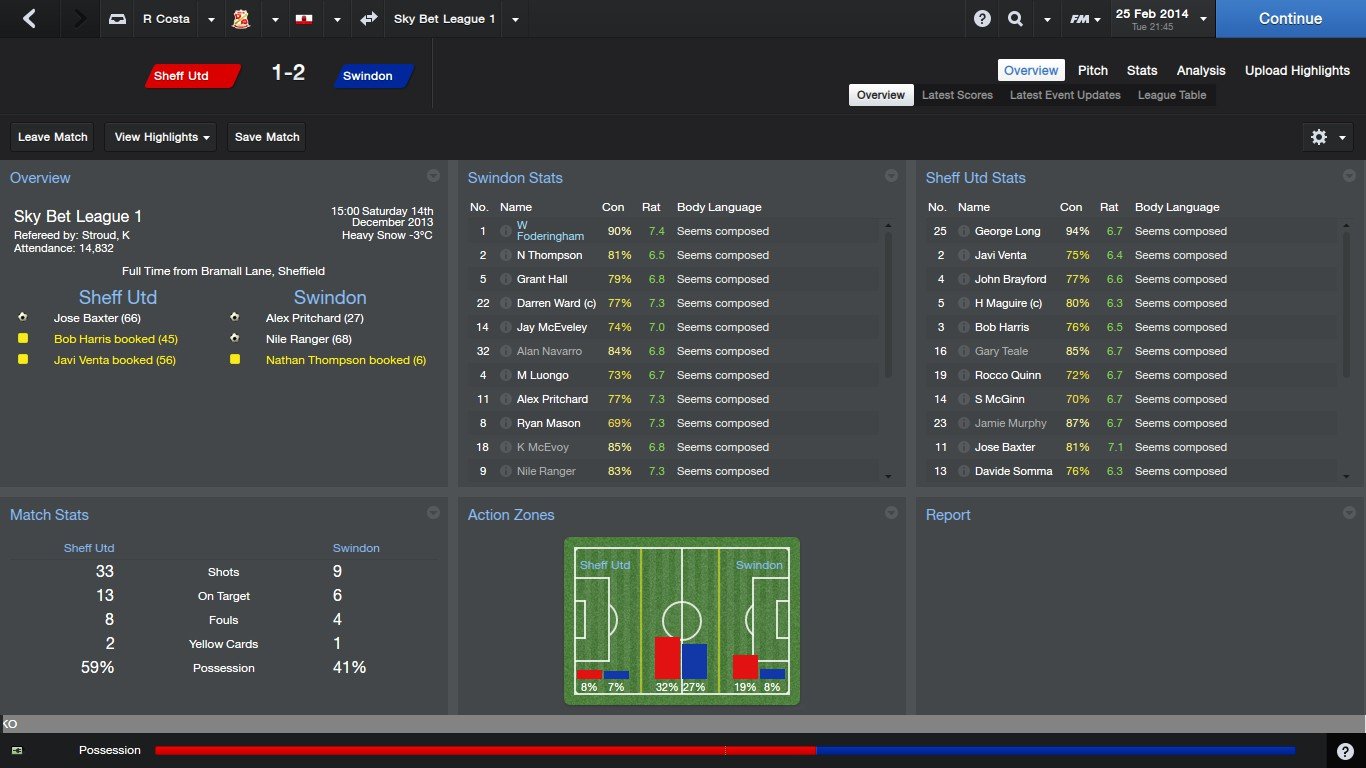 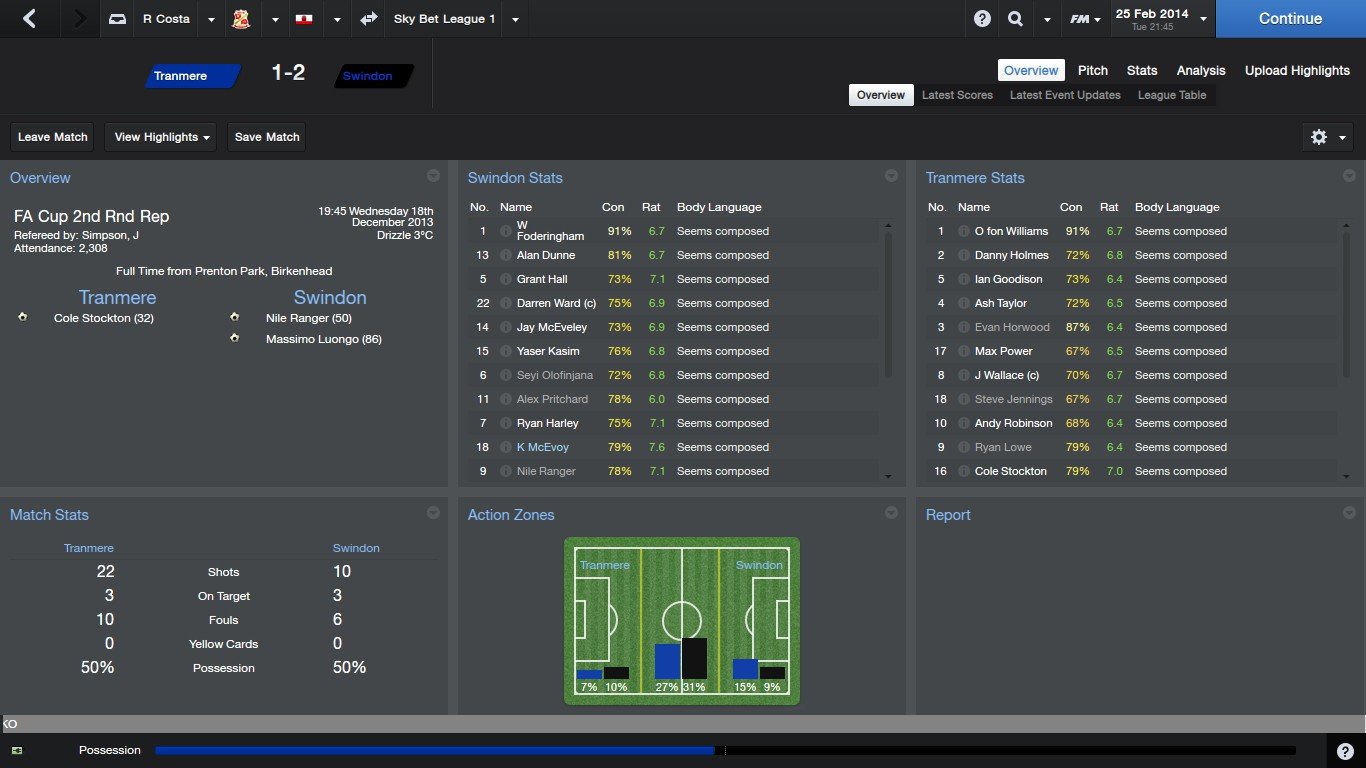 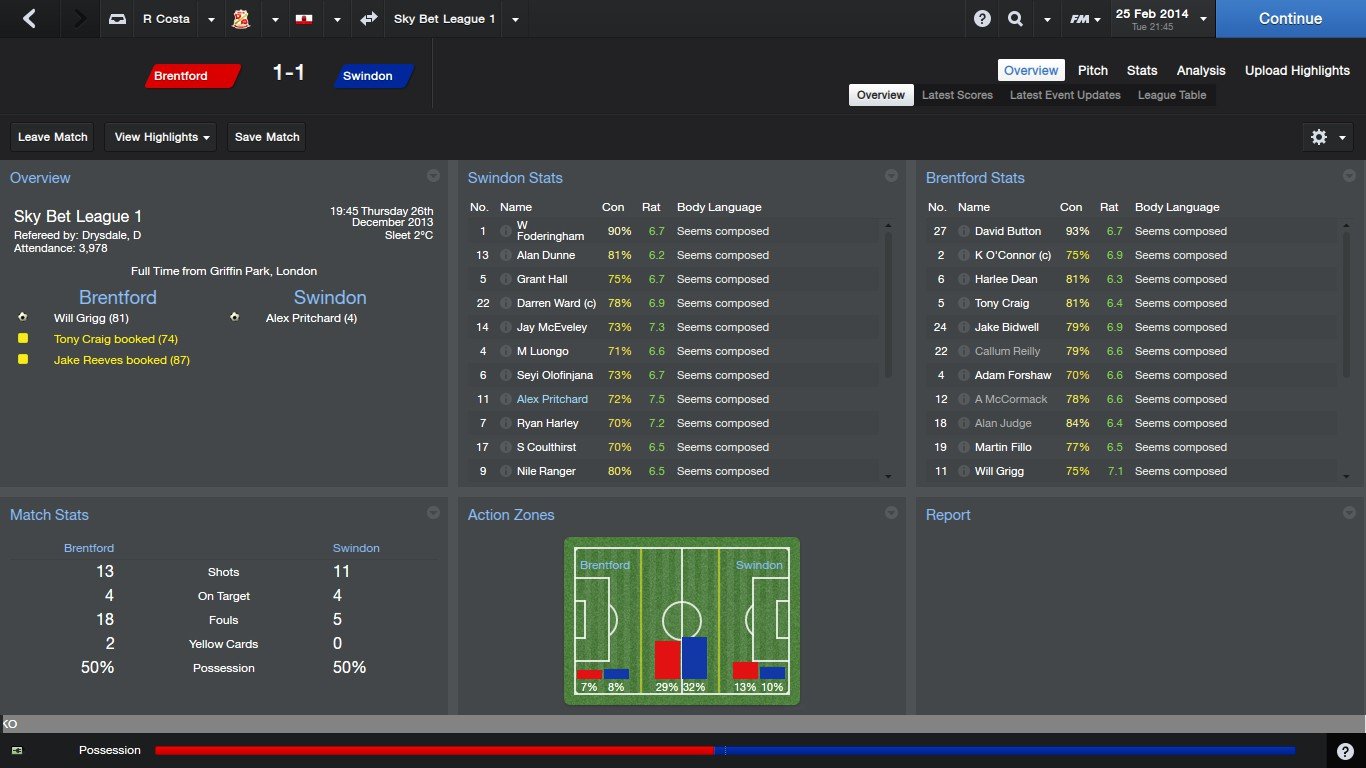 Swindon's Player Of The Month: Ryan Mason - This young man really impressed me, like Pritchard, a Spurs loanee. His performances have been outstanding and his passing, eye for goal and teamwork have been really impressive so i had to pick him, my obvious choice.

Costa's View: Really good month in my opinion. We had some solid results and it surprised me as I thought we would struggle against some of these opponents. The defeat to Coventry, which like last month against Crawley, was just embarrassing as we got demolished at home again, which makes me think we can't keep having consistent results when it comes to facing teams with strong players. Other than that defeat we were brilliant, again, another month of surprises as we push further away from the relegation zone towards the mid table finish that the board want me to get. Hopefully come January, we can bring in some new signings and push for better results.
Login to Quote

ManUtdTAW
8 years
Really good story:) keep it up! Definitely will be following this one!
Login to Quote

BaggiesJames
8 years
Next update will be tomorrow! Had internet problems and now im to tired to do one, so sorry if anybody was waiting
Login to Quote 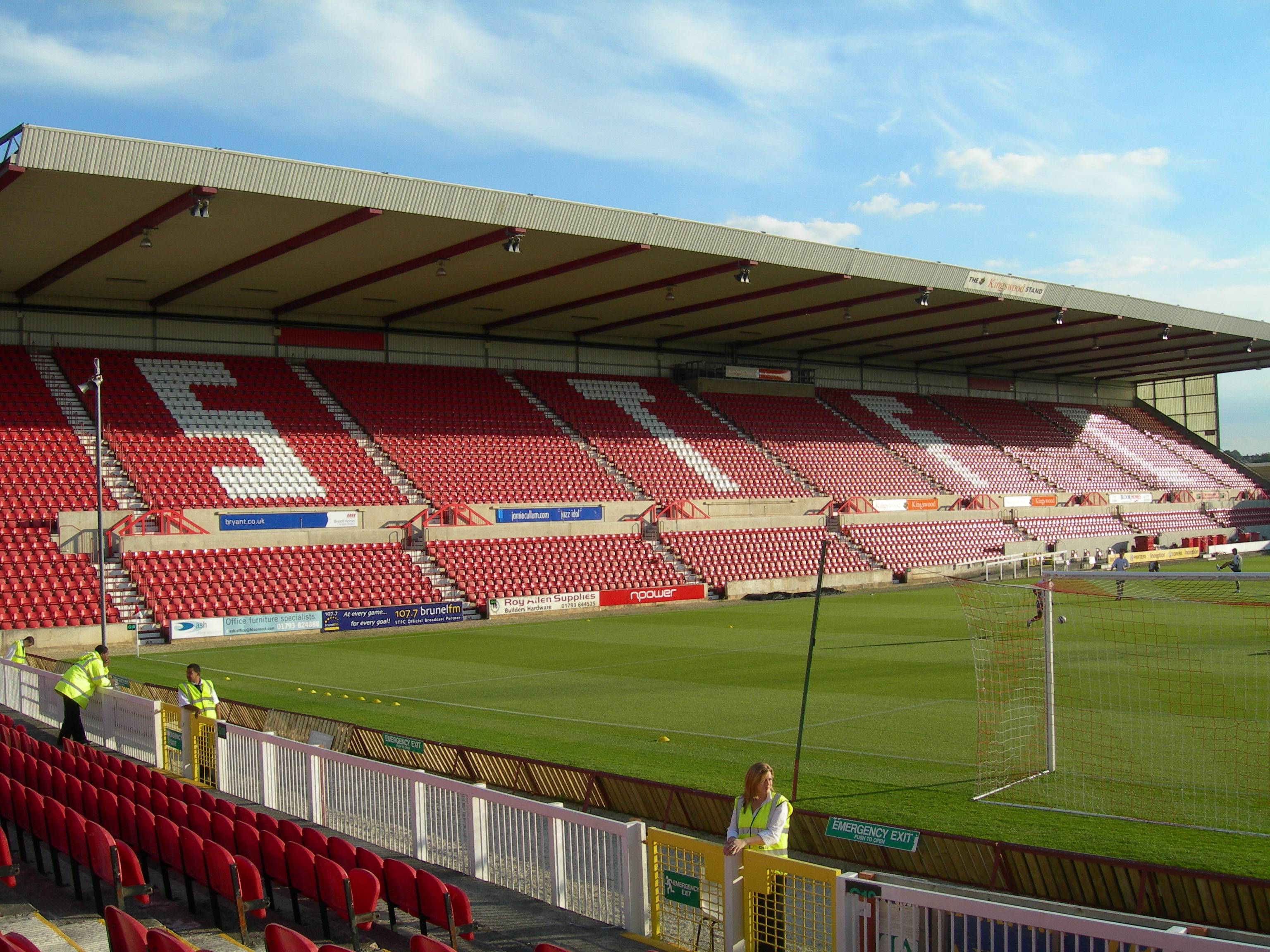 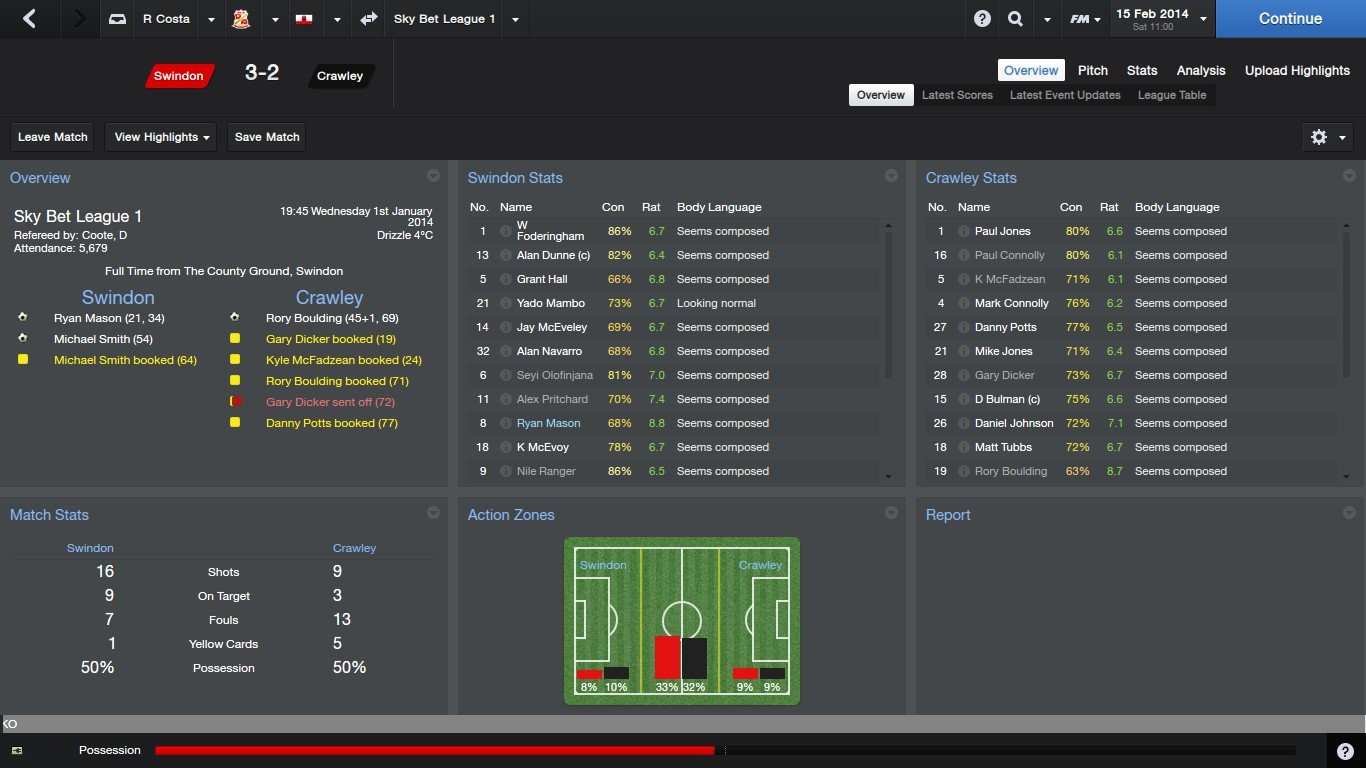 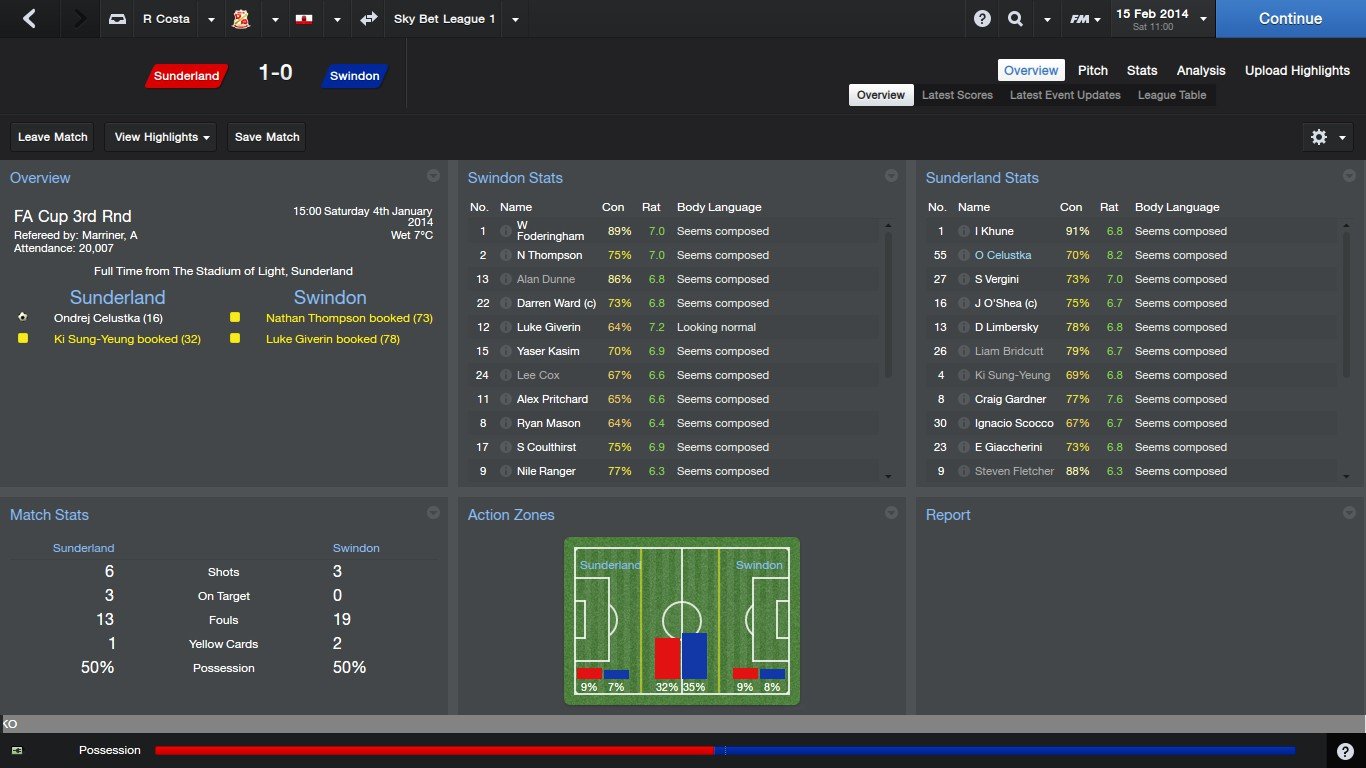 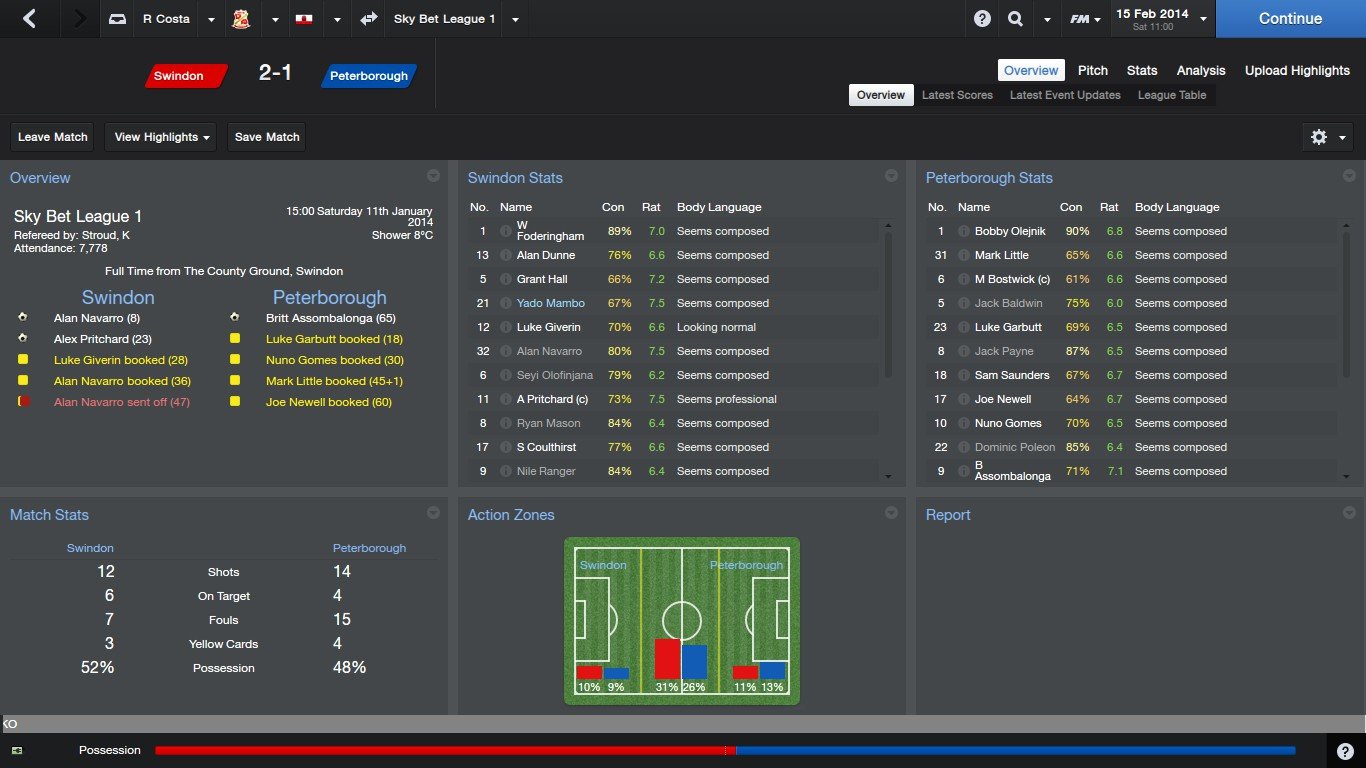 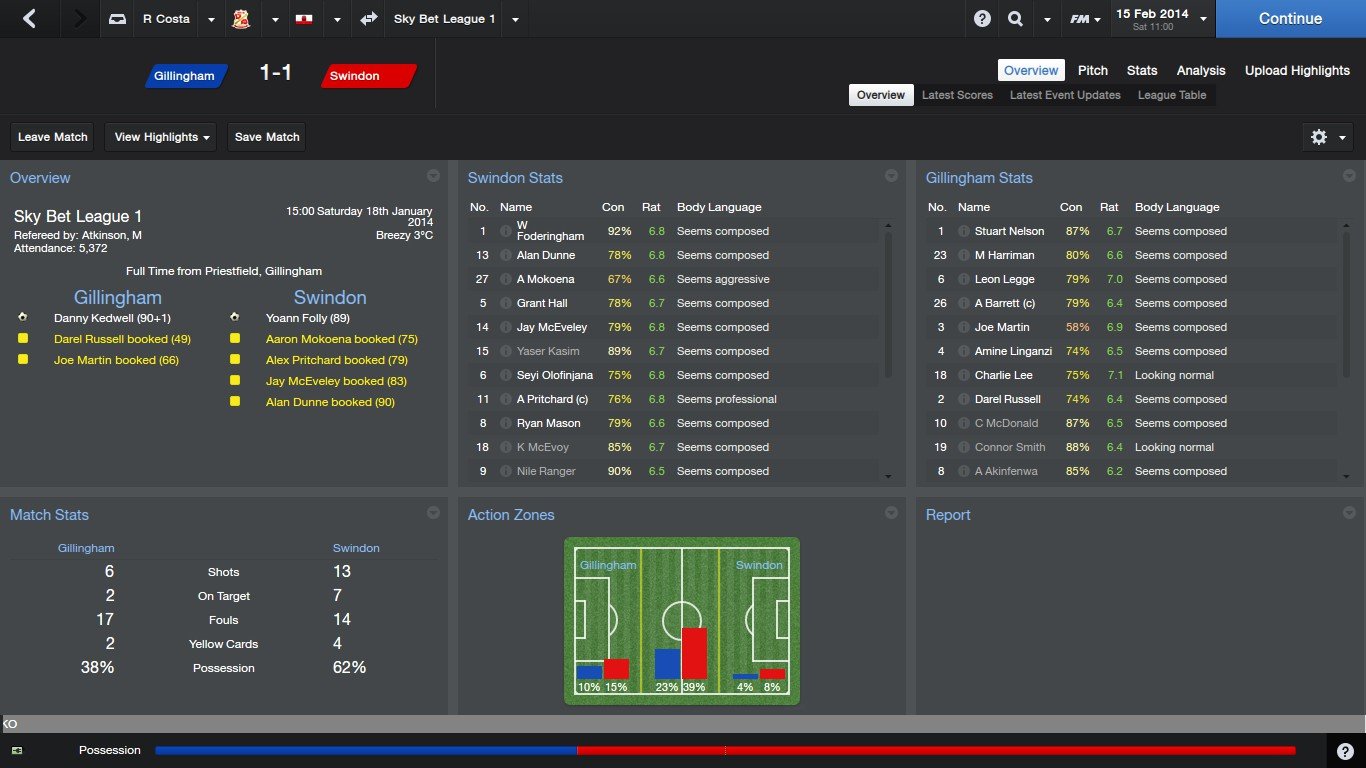 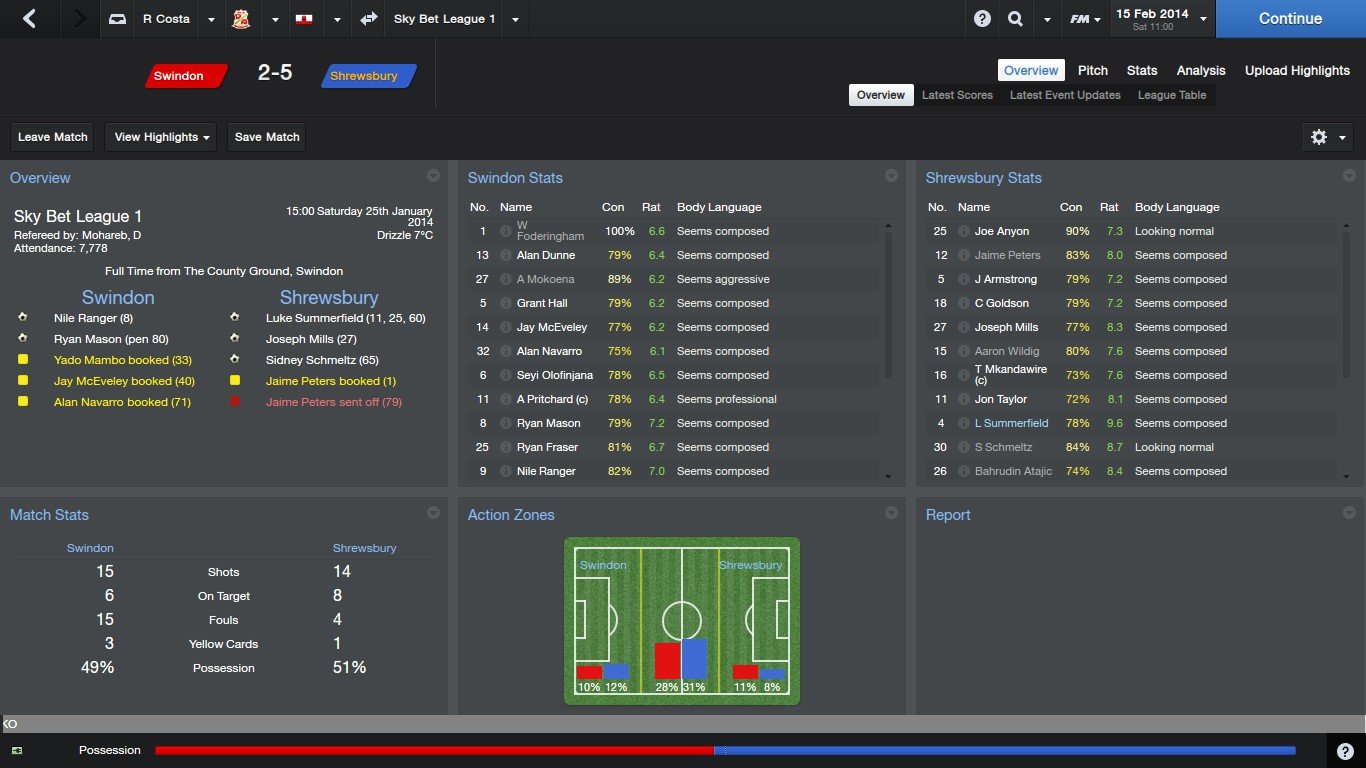 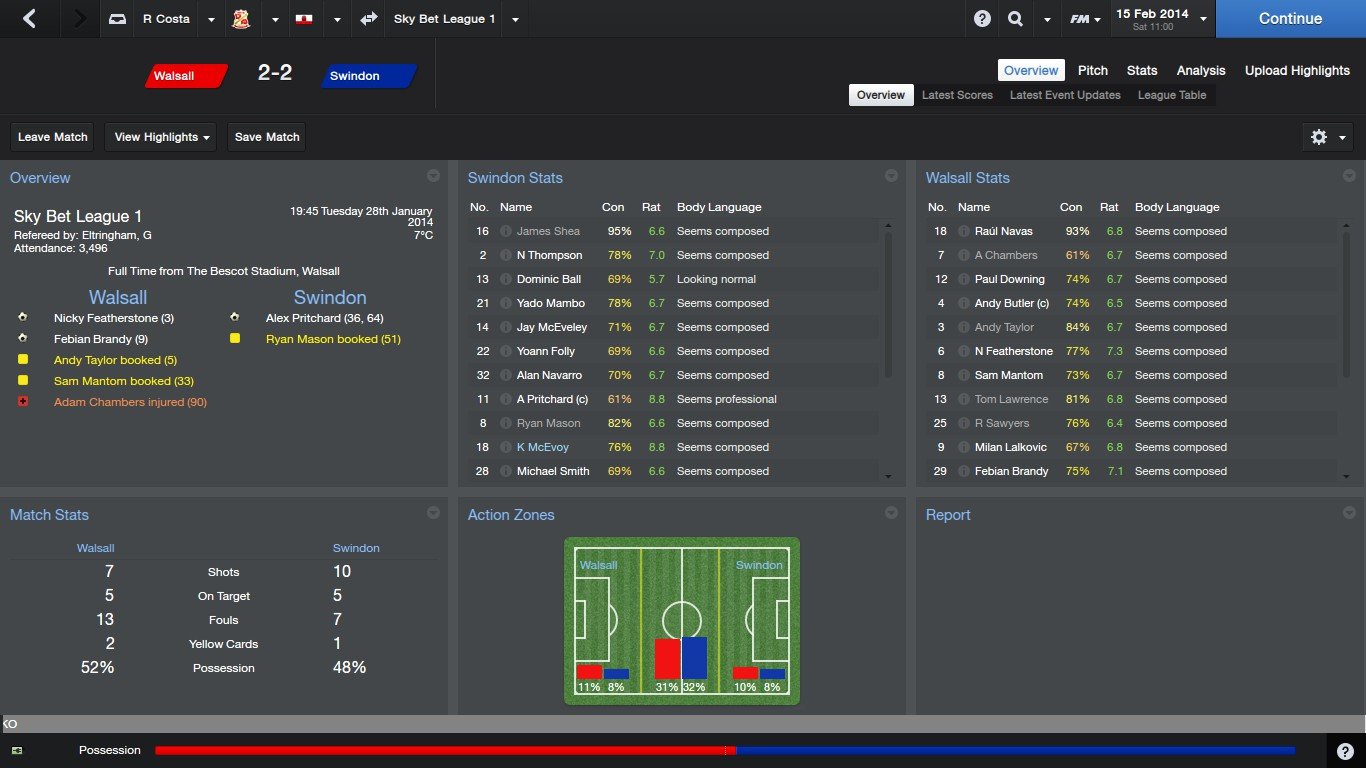 Swindon's Player Of The Month: Alex Pritchard – Cannot fault this lad, this is the second time in 3 months I have picked him as Swindon player of the month. Scoring 3 goals in 6 games, with an average rating of 7.25, he really has been on fine form picking up an assist to. He is carrying the team along when he is on form, and I believe he can go onto big things in the future, hopefully with us, but I cannot get too hopeful yet over a permanent deal.

Costa's View: Some good results there for January. The Sunderland game was one where i could be proud of my players for travelling away to a team two divisions higher than me and we lost by only one goal. If our performances keep up like this we can continue to climb the table, that's if our results don't change just like that. The 5-2 defeat to Shewsbury is a cause for concern as we keep losing games by a high amount of goals. We need to sort it out or It could cost us a high finish in the league.
Login to Quote

Ward Kicked Out Of Swindon 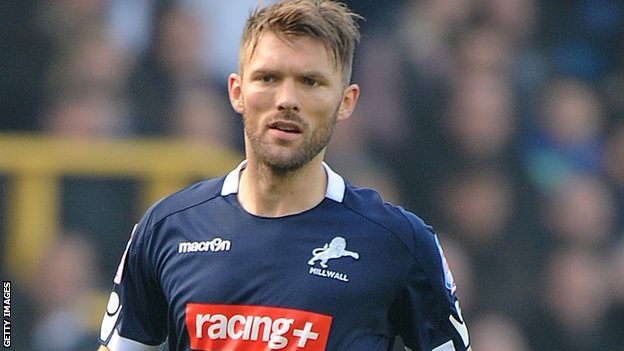 Swindon Town have today ripped up the contract of the club's defender Darren Ward after a heated argument between the 35 year old and the clubs manager Rui Costa. Swindon have said that Costa, 41, had stripped the captaincy from Ward and given it to influential midfielder Alex Pritchard, and Ward then apparently saw red at that decision. One of the Swindon players had called the police after a fight broke out between Costa and Ward, and there was smashed glass over the floor of the team's dining room with Costa being left with a bloodied face and Ward having a broken nose. Swindon chairman Lee Power released a statement on the clubs website to explain the situation to fans, "On the 10th of January, a fight broke out between Darren Ward and manager Rui Costa. We have terminated the contract of (Darren) Ward with immediate effect, and have fined (Rui) Costa two week's wages and suspended him from the clubs training ground indefinitely until the club have conducted a formal investigation. We wish Darren the best of luck in the rest of his career and we can also say that there will be no legal proceedings after the situation, so now hopefully we can just get on with the football and put all this behind us."

Ward was struggling to make the first team under Costa, despite being the clubs captain. He spent the previous season on loan at the County Ground and made the switch permanent in the summer. A few players apparently had strained relationships with Ward, and a few of them have privately said that they are glad he has left the club and look forward to the leadership of loanee Pritchard until the end of the season.
Login to Quote