Krueger In And Sacks Pochettino 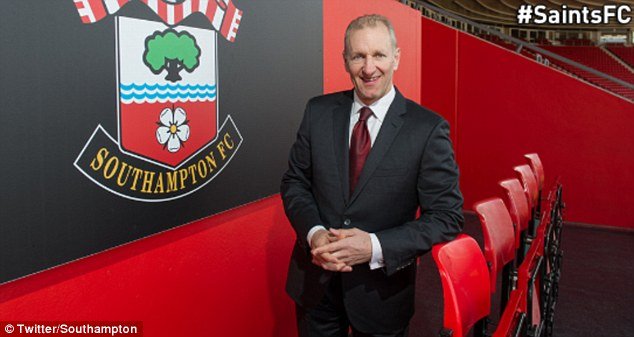 Controversial new chairman Ralph Krueger has today made his first big decision as the chairman and has decided to sack former manage Mauricio Pochettino. The change has come as a surprise for many as Pochettino has been on fine form when managing the club.

Krueger has not made it clear to the media as of why he has decided to do this. Many feel that the new chairman doesnt know hat he is doing any many fans have already been outside the stadium protesting about the departure Pochettino.

Now we can only speculate on who will be hired in the new position, Sky bet have Andre villas boas down as favourite at 2-1 also at 6-1 is Giovanni Trapattoni there is lastly at 10-1 the mainly unknown figure of Matthew Hamilton who has made his reputation after winning the Uefa Youth League as manager of Southampton EDS.Many fans are in favour of Villas boas taking charge but some have a suspicion that Hamilton is in with a chance of taking over the helm at St.Marys.
Login to Quote New manager Matthew Hamilton has been appointed into the Southampton managerial role, The 43 year old has a vast wealth of experience at youth level but has not had the chance to show his worth on the big stage as of yet. Hamilton has been placed into the Job on a One year rolling contract.

Hamilton has told the media that he is extremely pleased to have been given the opportunity to take over the helm at St Marys. New Chairman Ralph Krueger has pushed away any concerns regarding Hamiltons experience and has told the press that he has full confidence in him and feel that he can help them achieve their goals this season.

Hamilton is coming into a very youthful squad with a lot of potential. The new manager has reportedly been giving minimum funding for transfers after the club paid out big fees in the recent past for players like Wanyama and Ramirez.

The fans are happy with the appointment and the majority hope he can emulate the success he had with the youth squad with the 1st team, Hamiltons first competitive match will be in the league with an Home game against spurs which will be on Sky Sports 1 on the 12 of August.

Hamilton has been welcomed into the league by the other managers with open arms with many seeing it as an interesting appointment and they are looking forward to seeing what he can bring to the table, Jose Mourinho has said that he thinks hamilton will be a good manager in the future but he just needs to find his feet first.
Login to Quote


Player Of The Month: James Ward-Prowse, The youngster showed his value to the team and played in 7 of the 8 games raking up many assists.

Managers opinion: This month has been a good month for us although we were beaten on a few of the games it gave me knowledge that i can use to change the team to be more effective in the future, I now know he I want to keep and sell, I also have a few in mind about who to bring in. Its now onto looking forward to the next game against Spurs which will be tough for sure but I think if we play in the right manner, we have what it takes.
Login to Quote 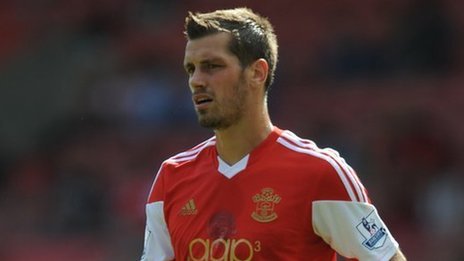 Southampton midfielder has today announced to the media that he has handed in a formal transfer request after becoming unhappy with the sacking of the clubs previous manager Mauricio Potchettino. The midfielder has released a statement telling the media that he has nothing against new manager Hamilton, but he doesnt feel he can be at the club after the decisions that were made by the hierarchy.

The French international will however not be cheap as southampton will be looking for a fee in the region of 15 million pounds. With clubs like Monaco and Chelsea it is looking like a deal will happen sooner rather than later. Schneiderlin will be leaving the club he has been at since 2008 and has also stated in the statement that he is greatfull for the fans support whilst he has been at St Marys.
Login to Quote 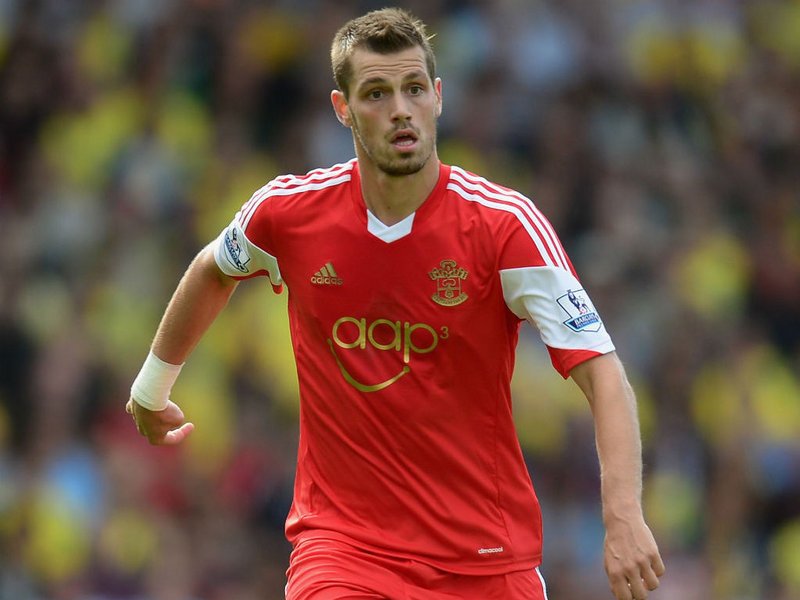 Today Morgan Schneiderlin has today been confirmed as As Monaco's newest signing.The Frenchmen has returned to his home country and has cost the French side a total of 17 million pounds. Schneiderlin who has now become the most expensive player to have been sold from Southampton after Alex Oxlaide Chamberlain who Arsenal signed for 15 million only a few years ago.

In departing the club many fans have taken to twitter to with the player good luck in his new adventures in Ligue 1. Also Scheniderlin has personally tweeted saying how overjoyed he is to be playing for such a promising team like Monaco.He also mentioned how grateful he is for the opportunity Southampton had gave him and thanks the fans for all their messages that they have sent him.

Schneiderlin is joining a very expensive and promising side withthe likes of Falcao, Rodriguez, Moutinho and other new signing Alex Sandro. The club who were recently been purchased by a wealth Arab have been accused of buying the title but it is fair to say they will have a challenge with other French Giant Psg also being busy in the window.
Login to Quote


Today Southampton have made their first signings of the window with the capture of player Bruno Ecuele Manga(left) and Alessio Cerci(below).The purchases have cost the club around £11 million pounds which must have taken a huge chunk out of the budget Hamilton was given at the start of the season 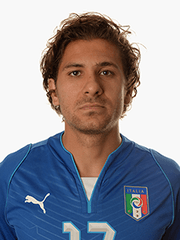 Cerci who has arrived from Torino was transfer listed by his club after a dispute with the current manager and requested to be transferred immediately. The Italian has said he could not be happier with signing for Southampton as he has always wanted to play in England. Manga who signed from Lorient was also estatic with signing for the club. Manga told the media outside the southampton training ground, "I am very excited to play along side a very youthful and talented squad".Manga is the current captain of his national side Gabon and has arrived in great form from pre season keeping 4 clean sheets out of 6 and scoring two goals.

The Cb and the wide man have received mixed welcomes from the fans as many were expecting a replacement for their recent departure Schneiderlin. This obviously was not the case and now southampton will look forward the season and will hope to make a impact on the league and with the squad of players the have i am sure they will be confident of putting in a good performance this year.
Login to Quote

thomas.hornsletten
7 years
When will next update be? Looking forward to it.
Login to Quote

MattZTH
7 years
Ive just finished the season so i will do a few tonight to make up for the lack of updates recently,Probably 3 or 4 updates.
Login to Quote


We have now kick started the season, hopefully this will be a great season for us1 Here are our first results of the season.


I personally think this month couldnt have gone much better, It was a complete success. Although you could say the games were against easier sides in the league we did face teams like Tottenham and the champions Man Utd and we held our own which is something we can be very proud about. There was clear outstanding victories against Man utd and also managing to beat a strong Hull side twice was a great achievement as they have a very promising side with the likes of Long and Jelavic upfront.Some of our vital players played a big part in our success this month with Lallana and Lambert both performing at an extremely pleasing level aswell as popping in a good number of goals to secure victory was also very satisfying. 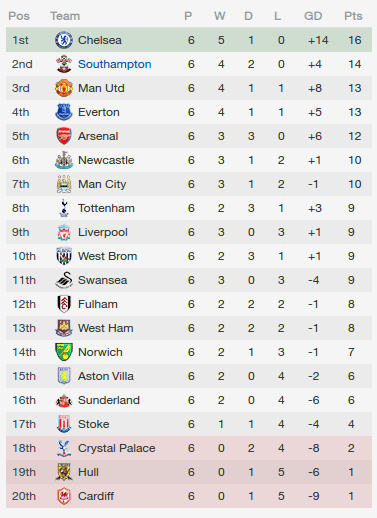 This month was good, many positives. Although we were beaten this month it was by the league leaders chelsea who just out did us on the day despite our valiant efforts which the team can be proud of.We also hammered Man city which was a surprise especially because of the manner of the victory was very pleasing. So far this season the club have been excelling past their league expectations and although it may be early, i feel by watching this team we have the ability and depth to challenge for a European spot which i feel is a realistic goal. 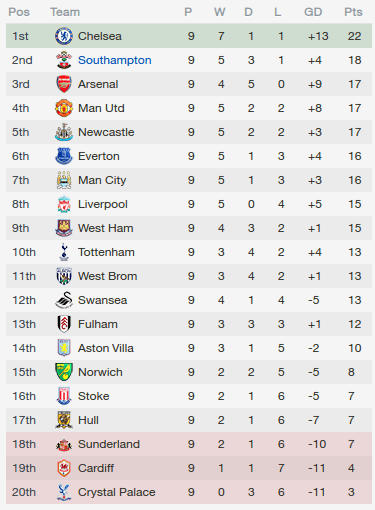