InvertedWingbacks
8 years
cheers guys! thanks for the support (:
Login to Quote

Aaron
8 years
Yeeeess!! Great results, keep is where we at now please, we want champions league

i'm only 5 points behind City, so aiming for the league if all goes well, although knowing my luck we'll blow it haha

The Liverpool board have announced today that manager Didi Hamann is allowed to make signings...provided they are under the age of 18, and the fee is below £1 Million.

The announcement comes after the closure of the January transfer window, and some fans have suggested it is too little, too late, but with the club in a strong position within the league, and still in the FA Cup, there are sections of support who are keen to see what Hamann does with the new money to secure the clubs future.
Login to Quote

Neal
8 years
Wow, what a month! Brilliant results, now keep this form going and challenge for the title!

Once Again, Liverpool made it through the month without suffering a defeat at anybody's hands, and even managed to win against title contenders Chelsea, and drew with bogey team Southampton on their way to cementing 4th place in the league, and keeping their hopes of European Qualification alive!

Within 8 minutes of kick-off at Anfield, ex-Chelsea man Sturridge popped up in the area to convert a half-chance, and give his old team nightmares. Steven Gerrard then converted a penalty after 38 minutes, which proved to be the deciding goal, as Liverpool ran out 2-0 victors.

Next, an FA Cup 4th round replay which should have been done the first time round. Harry Wilson powered a shot into the top corner after 11 minutes, and the Reds never looked like letting it slip, with Coutinho and Victor Moses adding the two goals which made it 3-1 at full time.

Draws against Newcastle and Manchester City followed, and the Reds slipped to fifth after these, although both were good performances. A 6-2 Victory against West Ham boosted confidence, and returned them to 4th position.

A 3-3 draw with Southampton ended the month, and extended Liverpool's unbeaten run, goals from Suarez, Agger and Aspas earning the draw, and keeping hopes alive ahead of a March fixture list which includes games against Arsenal, Everton and Manchester United. 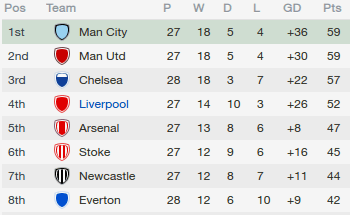 Josh_MU
8 years
A good month there man, some great wins and a very creditable draw against City. Doing well in the league!
1
Login to Quote

Neal
8 years
The draws are what are killing you! However, you're in fourth, which is all that counts. Keep it up and qualify for the Champions League!

Also, it'd be a shame if this streak only went for 24 games

Jack
8 years
Unlucky with the draws! Catching up is possible if you have a last few solid months!
Login to Quote

TCO
8 years
RVP's tearing up the league for United! Some good results, especially against Chelsea, should be able to push on to securing 4th place and hope Arsenal slip up. Keep it up!
Login to Quote

InvertedWingbacks
8 years
Thanks for all the comments guys! I'll have a March/April roundup done soon, in for a tense final 3 games!
Login to Quote

Liverpool So Close To Europe...

http://talksport.com/sites/default/files/field/image/201403/475799593.jpg
After some great performances, and devestating lows, Liverpool approach May, and the final two games of the season, with a sense of cautious optimism, with the side within touching distance of qualifying for the Champions League for the first time since their group-stage exit in the 2009-10 season.

In March, Liverpool faced 6 games, 3 of which came against top-rated opposition, in the form of Arsenal, Everton and Manchester United. Before that though, were games against Hull, Rotherham and Stoke.

The Month started well for Liverpool, as goals from Raheem Sterling and Daniel Sturridge sealed a hard-fought 2-1 win over Hull, continuing the Reds' unbeaten streak. Against Rotherham in the FA Cup 6th Round, a Raheem Sterling double, and a screamer from Iago Aspas sent the Reds through, keeping hopes of silverware alive.

Liverpool's next test was a tricky tie against Arsenal at the Emirates, but an early goal from Harry Wilson, followed by a goal either side of the break meant they saw Arsenal off in a 3-1 win. Luis Suarez was again the hero in the Merseyside derby, scoring twice as Liverpool won 2-1 at Anfield.

The fans were incredulous, their team so close to sealing European qualification, and having already dispatched 2 rivals, the game against Manchester United was a chance to send a clear message to the rest of the league, but it wasn't to be. Sahko put Liverpool ahead after 19 minutes, but a Robin Van Persie double brought Manchester United back into the game, and no matter how hard Liverpool tried, they could not find a way past David De Gea in the United goal.

And so ended the Unbeaten streak.

Many feared that result would signal the beginning of the end for Liverpool's hopes of Champions League football, but they bounced back against Aston Villa. Two goals from Coutinho, and a strike from Raheem Sterling saw the reds run out 3-1 winners and keep their challenge alive.

Against Fulham, Liverpool fell apart, conceding early on, they were never able to recover, and that trend continued in the FA Cup semi-final against Norwich. Out of the Cup, and staring at the prospect of missing out on Europe, Liverpool's fans were distraught.

A home tie against Sunderland represented an opportunity for Liverpool to get their campaign back on track, and the duly responded, Luis Suarez scoring twice, and Coutinho topping off a 3-1 victory. Against Cardiff, Coutinho's 76th minute strike had the fans in raptures; only two Cardiff goals could stop them now! In the 80th minute, Magnus Wolff Eikrem scored his first league goal, and Anfield fell silent. Those last ten minutes were probably the longest of Liverpool's season so far, but they held on to secure European Qualification.
Login to Quote