pompeyblue
8 years
Great to start your reign as Uruguay manager with a win albeit it was a close game.
Very nice update too, the layout is looking very nice!
Login to Quote

Neal
8 years
Josh_MU: Yeah the Egyptians really gave us a run for our money, but we held on for the win!

pompeyblue: A close game but a good result in the end. Glad you are liking the layout as well

Neal
8 years
Griffo: Just wait, I've got a big surprise in store for Costa Rica...might take a little while until you see it, but it's coming

Griffo
8 years
I can't help but feel my pure hatred for Suarez has now... ONCE AGAIN! been justified!
Login to Quote

MJK46
8 years
Has Suarez taken a bite out of anyone yet?
Login to Quote

Neal
8 years
Griffo: I can't defend this guy irl, but so far in game he's been an angel

BayernAmerica: NO! Not yet, at least 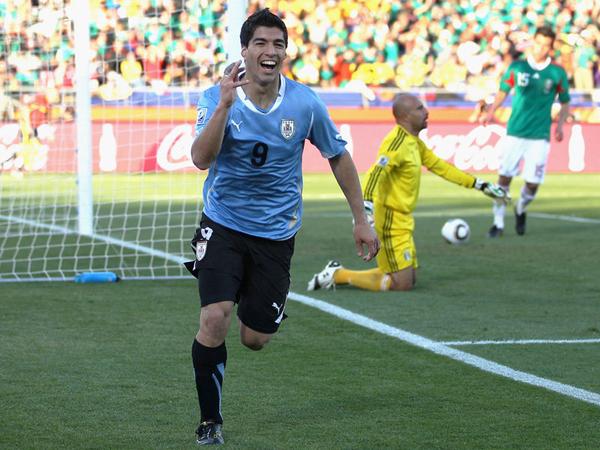 Vice-captain Luis Suarez will be integral to any success that Uruguay will have.

We've hit September at last, and the club football season in Europe's top leagues is well under way. On the international stage, however, World Cup Qualifying is already well under way. The Uruguayans have already qualified for the upcoming tournament in Brazil, but will hope to take maximum points from their final four games to ensure they are a seeded team in the group draw.

The first two of these final four matches will be played during this September international break; La Celeste will first travel to Lima to take on Peru before returning home to Montevideo to play Venezuela.

Marcelo Bielsa's squad selection won't be quite as difficult as last time, with a number of players once again fit and ready to play for the national side. However, there are still a couple of injuries with Porto fullback Jorge Fucile set to miss out with a groin strain while Atletico Paraneanse Lucas Olaza withdrew himself with a serious virus.

To replace them, Miguel Britos has been called up to the squad. The central defender, who plies his trade at Napoli in Serie A, could make his first ever cap for his country in the upcoming matches at the surprising age of already 28 years old.

Arevalo Rios did make the squad, but he is racing against the clock to recover from a sprained ankle in time to play, at least in the second match against Venezuela. Without him, Alvaro Gonzalez is expected to slide into central midfield alongside Walter Gargano, both Serie A regulars.

JasonRM
8 years • Edited
I only ever clicked on this story because I was forced by Neal into reading. I would never ever consider reading his story. I might even make him a pitiful banner for him like I did with his Inter Story.

Griffo
8 years
Suarez really adds some bite to that squad!
Login to Quote

2014-06-27 03:12#181702 The Madridista : I only ever clicked on this story because I was forced by Neal into reading. I would never ever consider reading his story. I might even make him a pitiful banner for him like I did with his Inter Story.

Neal
8 years
The Madridista: You liar

And yes that was one helluva banner wasn't it

Griffo: Yes he's quite a toothy figure, isn't he

Josh_MU: Thanks, I think we can definitely grab 2 wins!

Pauker: It was quite a banner

Note from the Author


Well, I may have bragged in my introduction about handling 4 stories, but I think I was wrong. I've noticed that my drive to update has flagged of late, and I think it's due to the pure number of stories I have to write for. Because this is the newest story, I have the least attachment to it, so I am indefinitely suspending this story. I may return to it, one day, if I feel the urge, but for now, 3 stories is enough. Hopefully, with less workload, update quality should go up on the other stories, and my stress levels will go down

Thank you to all who supported me in this short venture, I hope that you all won't miss it too much with my 3 other stories being around