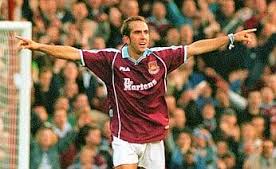 
Paolo Di Canio has been revealed as the new manager of West Ham United, signing a three year deal in the late hours of Monday night. Many supporters are overjoyed with the appointment, as Di Canio as a fans favourite here at the Boleyn Ground.

" I am delighted to have signed with West Ham, I have had a few managerial posts that haven't worked out in the past for me, but I really feel at home here and I just want to bring success to this wonderful football club." Those were the words spoken by Di Matteo when questioned on the matter earlier.

We will have to wait and see if this a good or bad appointment made by the West Ham Board of Directors. Di Canio, doesn't have a lot of time left until the start of the season to get his squad ready and competitive will this be a problem?

Di Canio's backroom staff haven't been announced yet, but rumour has it that Teddy Sheringham will be his assistant - Nothing has been confirmed as of yet though.

Even though this sounds like a good thing for West Ham, there were still some supporters of the club that are not happy. " It's an absolute disgrace, what are the board thinking?" One supporter said when questioned.

We wish Di Canio the best of luck with this job, and we hope that he can bring success to West Ham which he has promised. At the end of the day, no one likes promises to be broken!
Login to Quote

Griffo
8 years
Great choice in manager, I'm looking forward to the start of the season!
Login to Quote

squirmy420
8 years
I read somewhere that the hammers were Di Canio's destiny... Not sure where. Very good start, can't wait for the season to kick on.
Login to Quote

Won't be long till the season starts :p 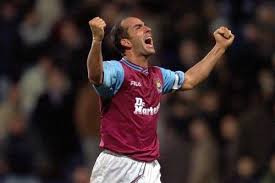 I am writing this as the new manager of West Ham United. I am so excited about this opportunity, I have always wanted to manage West Ham and now it has finally come true!

I have so many things that I want to do for this football club, it has a special place in my heart. I will bring success to West Ham - That is a promise!

Since I have arrived, the players have been so supportive and welcoming. Obviously I have a history with West Ham, but the players have really taken to my ideas and plans that I want to put in place.

I will make West Ham, a world renowned football club. I know this might sound a little bit premature, but I feel so happy with everything at the minute, and the players are feeding off my energy.

This is where I finish writing, but I will see you all next month. Where the journey begins.....
Login to Quote

Zed
8 years
Nice update in first person! And I feel Di Canio is a good choice for West Ham! Will be nice to see if he can keep his temper this time round

There may be a few moments where his temper is tested

One In, One Out As Di Canio Makes First Move In Transfer Market!


Since becoming the new West Ham United manager, Paolo Di Canio has been a busy boy trying to get his squad ready for the new season. His first impact on the transfer market has seen one player come to the club, and another player go the opposite direction.

The player that was brought in was Michy Batshayi, a young, Belgian striker wth bags of potential. The reported fee paid for Batshuayi was £6.75M - Which was his release course set by Standard.

" I am delighted to have secured a young talent such as Michy, he has bags of potenial and he will be a real star if he is trained in the right manner and he is kept happy. Some people think that the fee paid was a little bit much, yes, maybe current ability it was a little much but over the long run, I think we have a real talent on our hands for a real cheap price. Those were the words of Paolo Di Canio - The West Ham Manager.

" I have always wanted to play in the premier league, I am so glad that it has finally happened! I can't wait to show all the supporters and manager what I can do and I promise that I won't let him down" Those were the words of Michy Batshuayi.

The player that has left the Boleyn Ground, is central defender Winston Reid. Next season he will be wearing the colours of West Bromwich Albion, the fee paid by West Brom was £6M with £2M to be paid over 12 months.

" I don't think that Winston was going to be involved this season, and I didn't wan't an unhappy player in the dressing room. Which if he's not playing, he will understandably not be happy. I think the deal has been good both ways, we received a decent amount for him and hopefully Winston will be involved at West Brom" Paolo Di Canio's view.

" I am happy that I have moved, I've always wanted to play for West Brom for some reason, so for it to actually happen, it was an offer that I couldn't refuse. I would like to thank all the West Ham supporters, that treated me amazingly while I was at West Ham. Over time, things happen which led me to leave, but I hope there is no hard feelings. 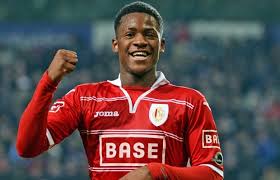 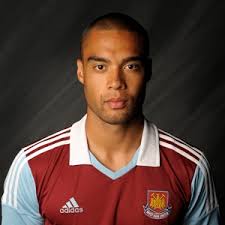 Zed
8 years
Good striker for the Hammers, I hope he'll score you some vital goals! And Reid is a good defender, but I understand why you sold him.
Login to Quote