Could also be the keeper from Lokomotiv Moscow!

Jonte-23: Haha, thanks man good to see you are enjoying the story so far

Neal and The Madridista: lel, none of them. I made a spelling mistake on the update 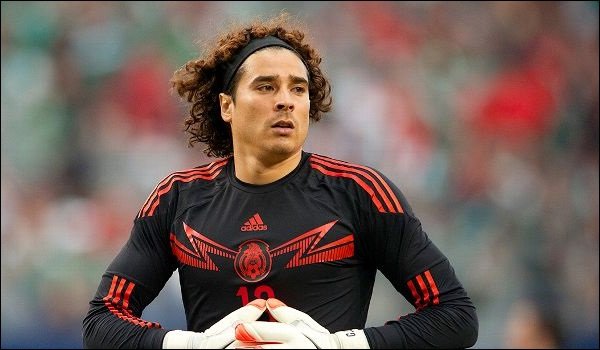 Not long after his appointment, new Olympique Lyonnais manager Juninho has swooped for his first signing, with goalkeeper Guillermo Ochoa completing a move to Stade de Gerland.

Ochoa, 28 years old, hails from Mexico and represented his during this summer’s World Cup in Brazil. In the tournament, he earned many plaudits for some excellent performances and outstanding saves thus plenty of teams took an interest in him especially considering he was available on a free transfer.

He left fellow French club AC Ajaccio at the end of the season, following the end of his contract, with the stopper deciding the time was right for him to move on. Ajaccio was only his second club in his playing career, with Club America being the first. He made 211 appearances in his 7 year spell at Club America in his native Mexico, establishing himself as a skilled yet underrated goalkeeper. During this period he also managed to achieve some silverware, winning the Primera División, the Campeón de Campeones, the CONCACAF Champions Cup and the InterLiga.

As was already mentioned, Ajaccio was the club he made the move to after leaving Club America, meaning he made the venture into European football for the first time in his career. He was a popular player at but couldn’t prevent L’ACA getting relegated into Ligue 2, even with some heroic saves in games throughout the season which he was duly credited for.

Nonetheless his displays did earn him the starting goalkeeping spot in Mexico’s World Cup squad, giving him the chance to shine on the greatest stage. He did just, starring particularly in his countries 0-0 draw against hosts Brazil. After this game, his agent claimed 20 clubs were looking at signing the player however it is Olympique Lyonnais he has moved onto now following the end of the tournament.

With Anothony Lopes, Matheiu Gorgelin and Theo Defourney on the books, Lyon clearly were lacking ability in the goalkeeping department with only Lopes up to standards. Even he was not seen as the right option by new manager Juninho and therefore he has acted quickly to fight off interest from other clubs and bring Ochoa to Les Gones.

Brazilian Juninho, told the press about his delight in bringing Ochoa to the club. ”He’s a great goalkeeper, and his performances at the World Cup showed that. Anyone who didn’t know about him, will do know but having seen him play I was already aware of his abilities. Picking him up on a free transfer is a great bit of business too. Its financially beneficial for the club and it also means we offer him a very good opportunity to come to well supported club that has a clearly laid out plan to get back to the top of French football.”

Ochoa also had a few words to say about his new challenge in football, describing it as an honour to be playing for a club with such pedigree in recent years. ”I can’t wait to get going. It’s a club with plenty of pedigree in recent years, so I am honoured to have signed for them. I feel like there is a good buzz about the place, and that we are going to have some success here soon. We have a very aspiring and ambitious manager, who if he can translate his skills as a player into a manager, is certainly capable of helping us on to glory. Who knows what we can achieve, personally I believe that the future is very bright and so naturally I wanted to be a part of it.”

With a limited budget Juninho will have to pull of more deals like this, and spend very wisely indeed if he wants to add to his squad. This is trickier than it seems, however he has pulled off a great deal in picking up a player of Ochoa’s ability on a free transfer. Reports currently have Olympique Lyonnais linked with a new striker, and Andre Pierre Gignac is reportedly heading the list. The only problem is he may be just out of the price range and so it looks unlikely this deal will be happening anytime soon.

Josh_MU
7 years
What a signing! He was so good for Mexico! Let's hope he performs just as well for you!
Login to Quote

Zed
7 years
It's great how you can write a whole story about only one signing. I wish I could do that

Anyways, great signing, as Lyon are lacking a good goalkeeper
Login to Quote

Iditaa
7 years
Ochoa is a quality goal-keeper mate, I hope he will be your best player!..Good luck to OL!
Login to Quote

Andrewe
7 years
Nice signing! goes well with the story and his performance in the World Cup was worldly
Login to Quote

captainbrickarms
7 years
He is quality!
Login to Quote

Griffo
7 years
Good signing! How much was the transfer fee?
Login to Quote

pompeyblue
7 years
Josh: Yeah, he was really impressive for Mexico so hopefully he can continue to perform for me.

ASR-PSV: Haha, I like to put detail into my updates! Yeah, goalkeeper was a position that needed strengthening so I am glad to have picked up Ochoa.

Iditaa, Jonte-23 and Andrewe: Thanks a lot guys.

captainbrickarms: He's not bad, is he?

Griffo Cheers. As the update said, he was a free transfer.

pokarioboy
7 years
Lets hope Ochoa does well for you! Wouldn't be to much of a loss though, after all, he either turns out an amazing free transfer or a disappointing free transfer. Both ways he's free :p
Login to Quote

pompeyblue
7 years
pokarioboy and JamesWilson: Thanks lads, hopefully he lives up to expectation.
Login to Quote