A decent month of results. Plenty of goals but a disappointing draw against Sociedad meant I lost further ground on Real Madrid. Frustratingly, they lost a game but in the cup rather than the league!! Some potential banana skin fixtures to come in March. 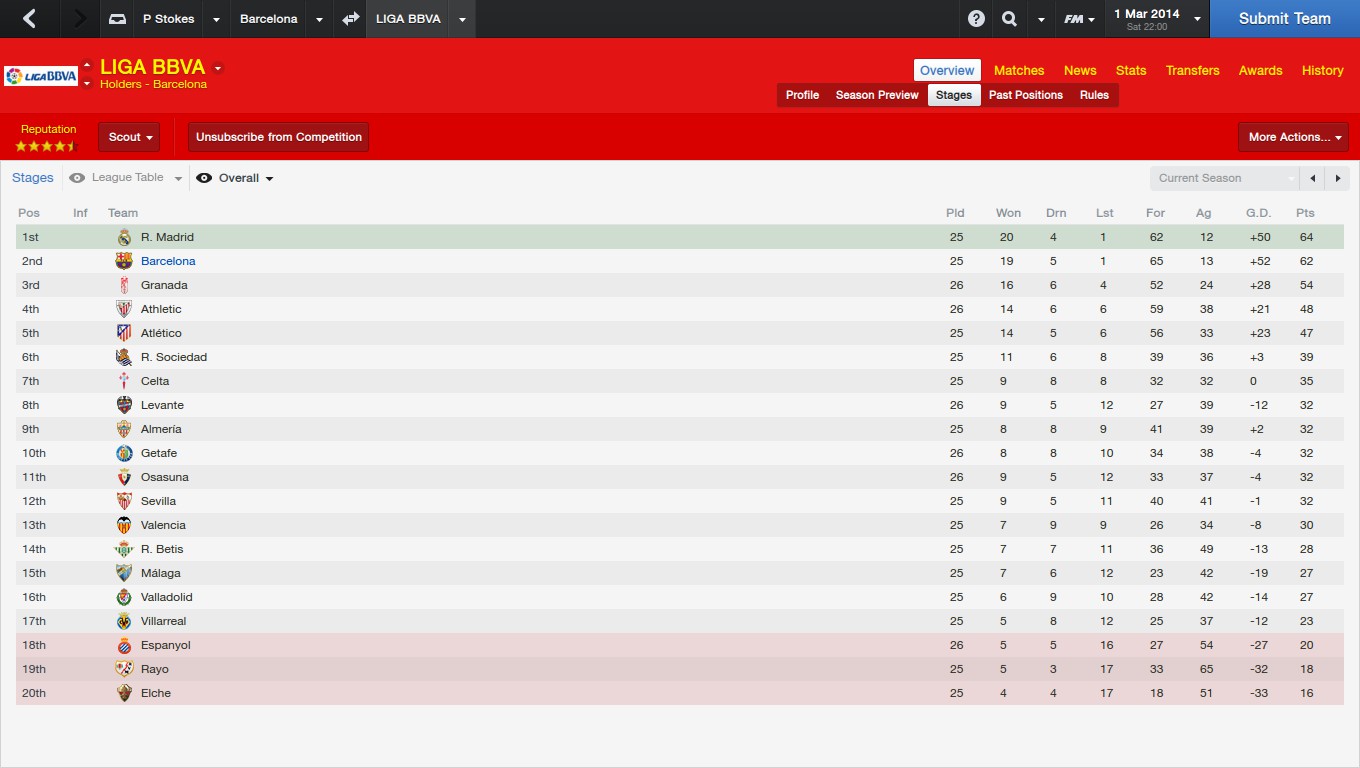 Still 2 points off the top but with a nice cushion over third.

100% for the month of March with plenty of goals. I won the big game against Madrid thanks to a 50 yard lob from Messi. 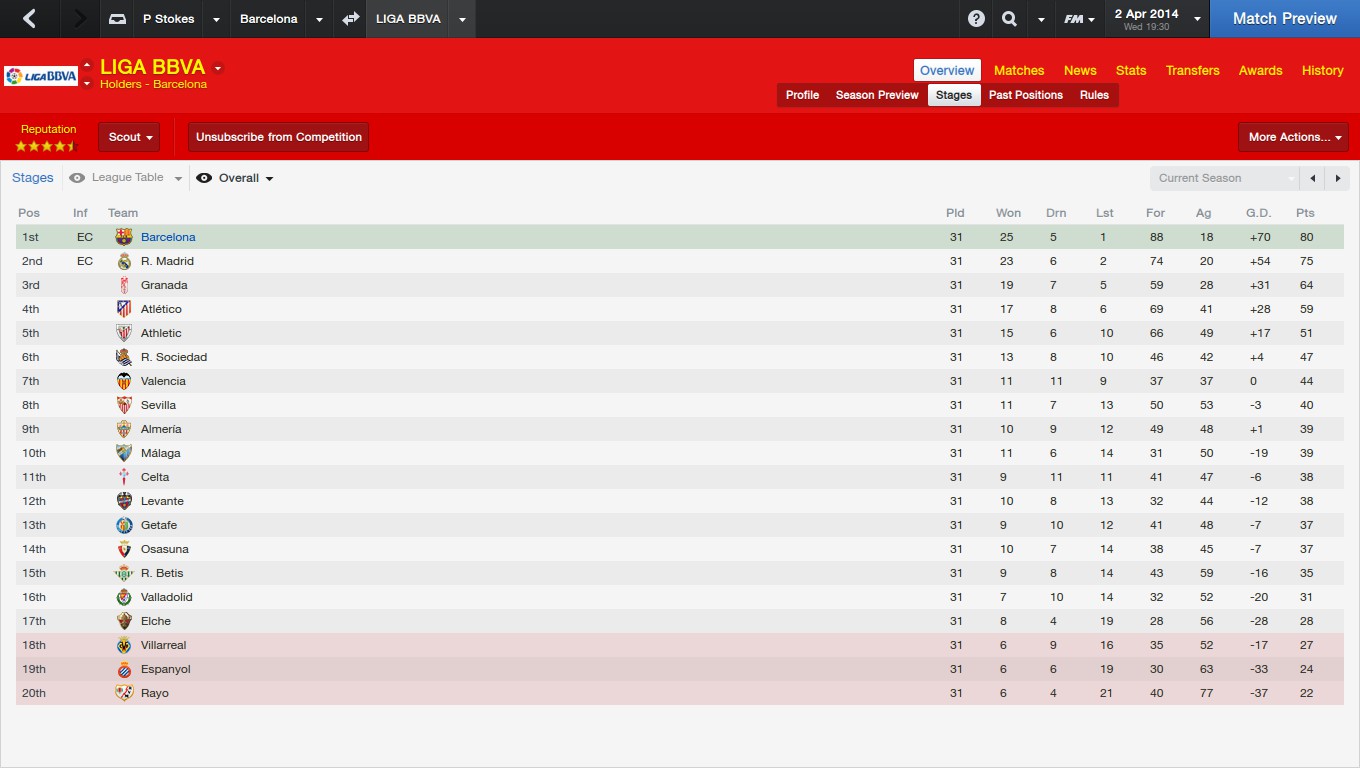 As you can see, I have accrued a 5 point lead over Madrid thanks to me beating them.
Login to Quote

Jamesg237
5 years
Is this suppose to be a lower league challenge? :S
Login to Quote

Nope. In the first post I explained how I normally do Lower League saves so as something a bit different I'd try managing a big team because I've pretty much never done it. I'm aiming to win every top league in Europe starting with Spain.
Login to Quote 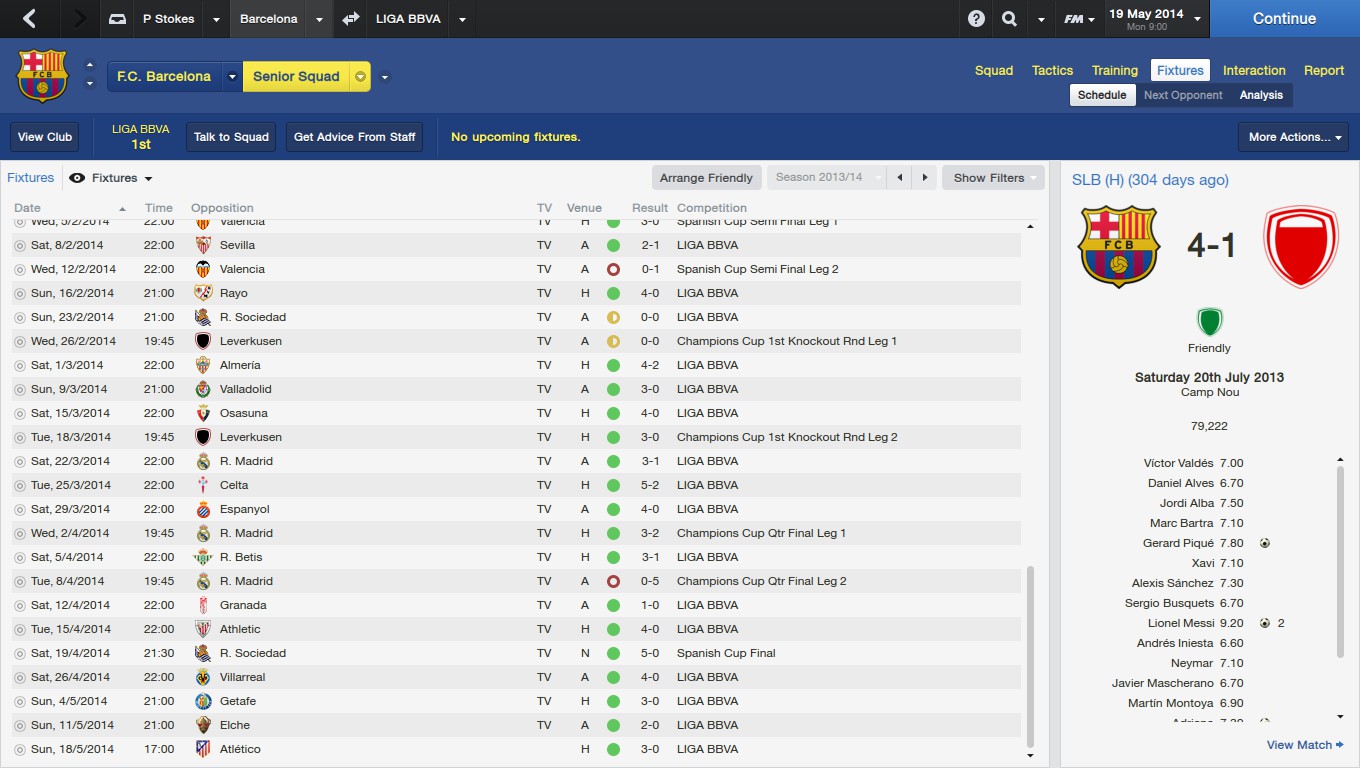 An excellent end to the season saw me crowned as champions completing a treble (Spanish Super Cup, Copa Del Rey and La Liga). Messi finished top scorer and I came second in Manager of the Year due to Granada performing above all expectations. 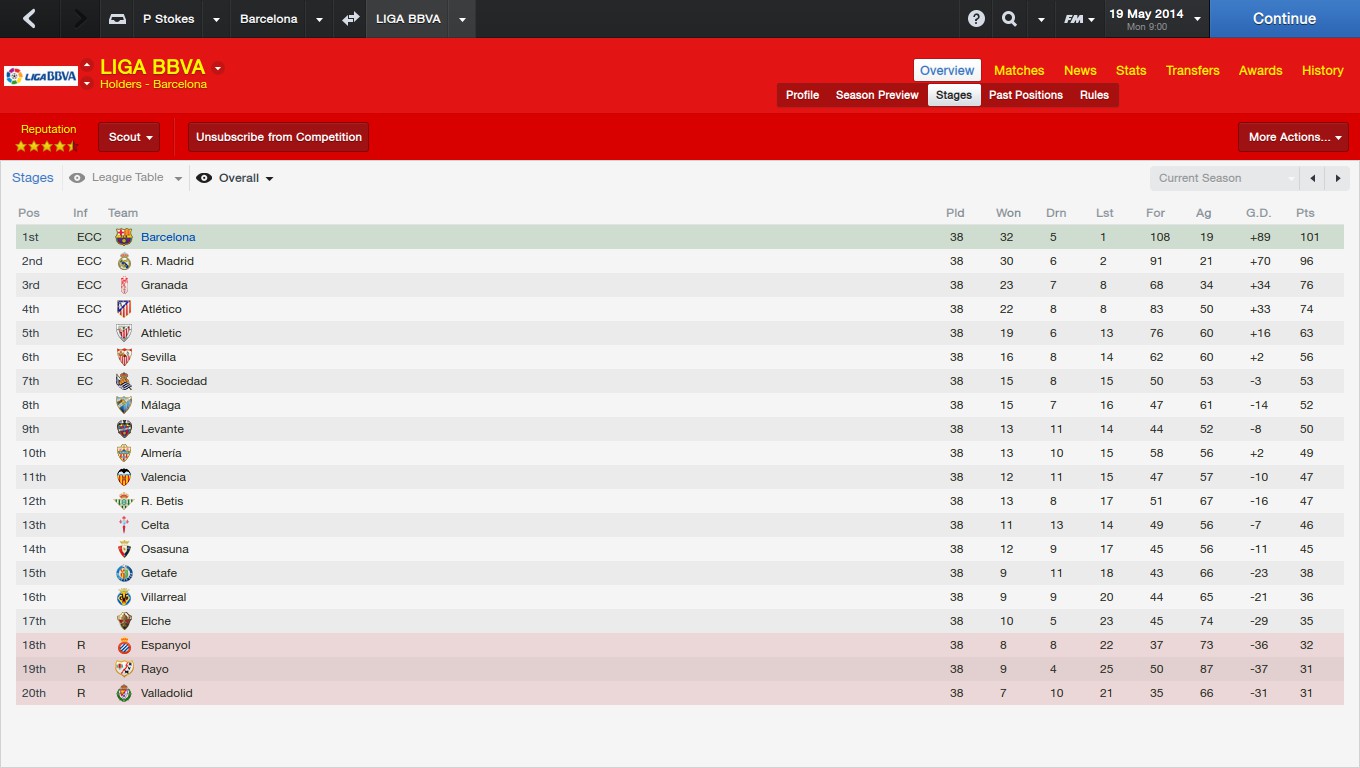 This is the final league table. I finished with a record number of points and a huge amount of goals. Part 1 of my challenge is now complete!!


The next step is to find a new job which probably won't go down too well with the board who are doing their utmost to offer me a new contract. There are a few jobs available, mainly in Germany and Holland. Leverkusen is looking like a good bet at the minute as they have very good training facilities, a good squad and decent finances to sustain a title challenge. I have therefore applied for the job. More news as and when...
Login to Quote 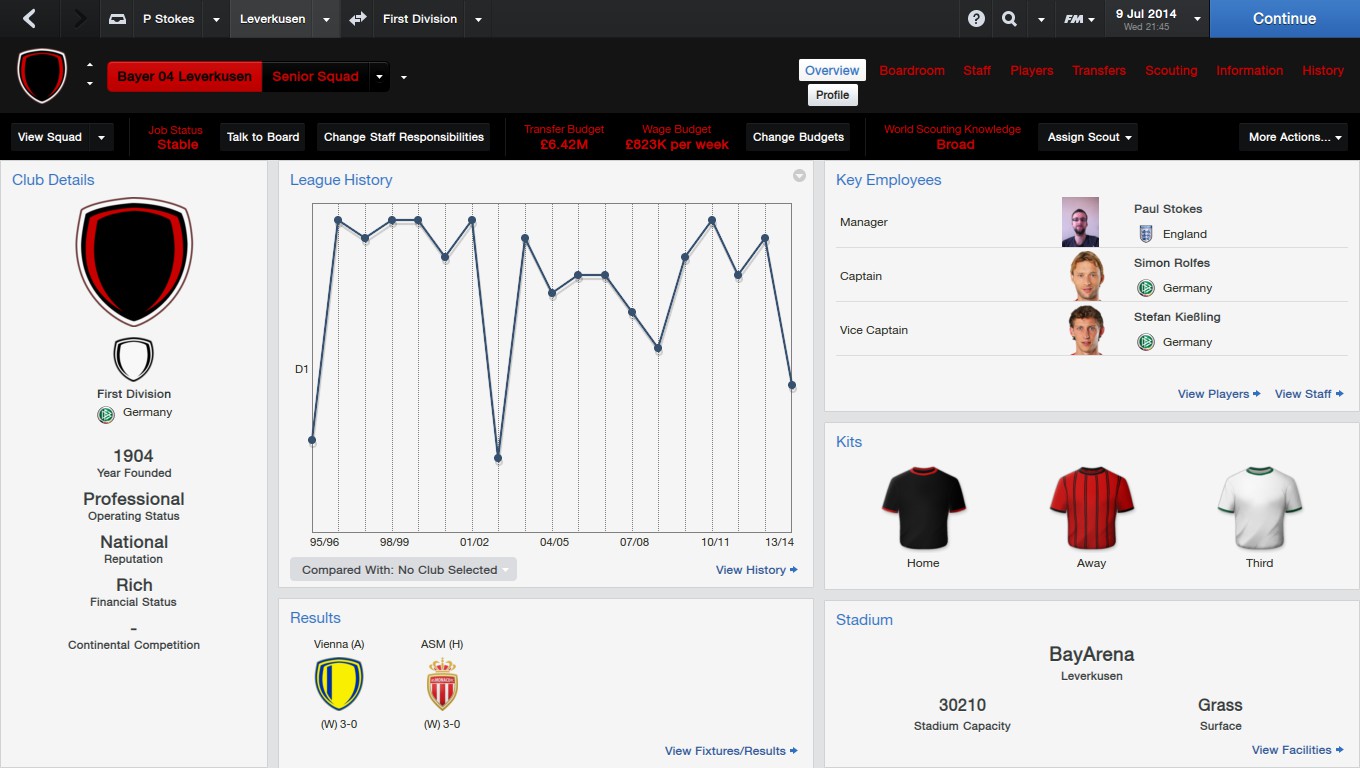 I was offered the job at Leverkusen which I duly accepted. There's a lot of potential in the squad but also a lot of gaps. I found a 5 star potential 14 year old defender in my youth team. The disappointing fact about that is I will probably have moved on before he gets enough experience to play in the first team.

Here are my transfers thus far: 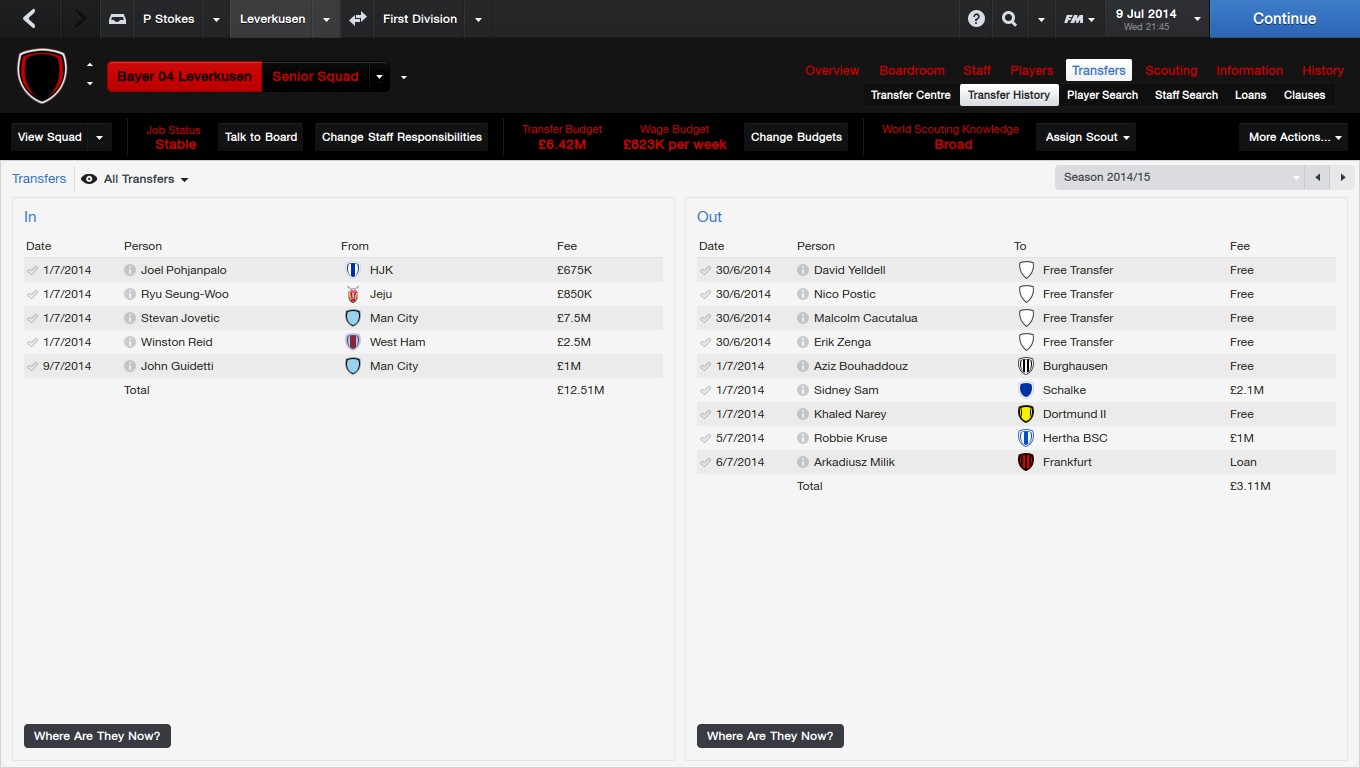 Next update will be at the end of preseason.
Login to Quote

dshaw292
5 years
Very clever idea for a save and a ballsy move to Leverkusen. Much respect given.
1
Login to Quote 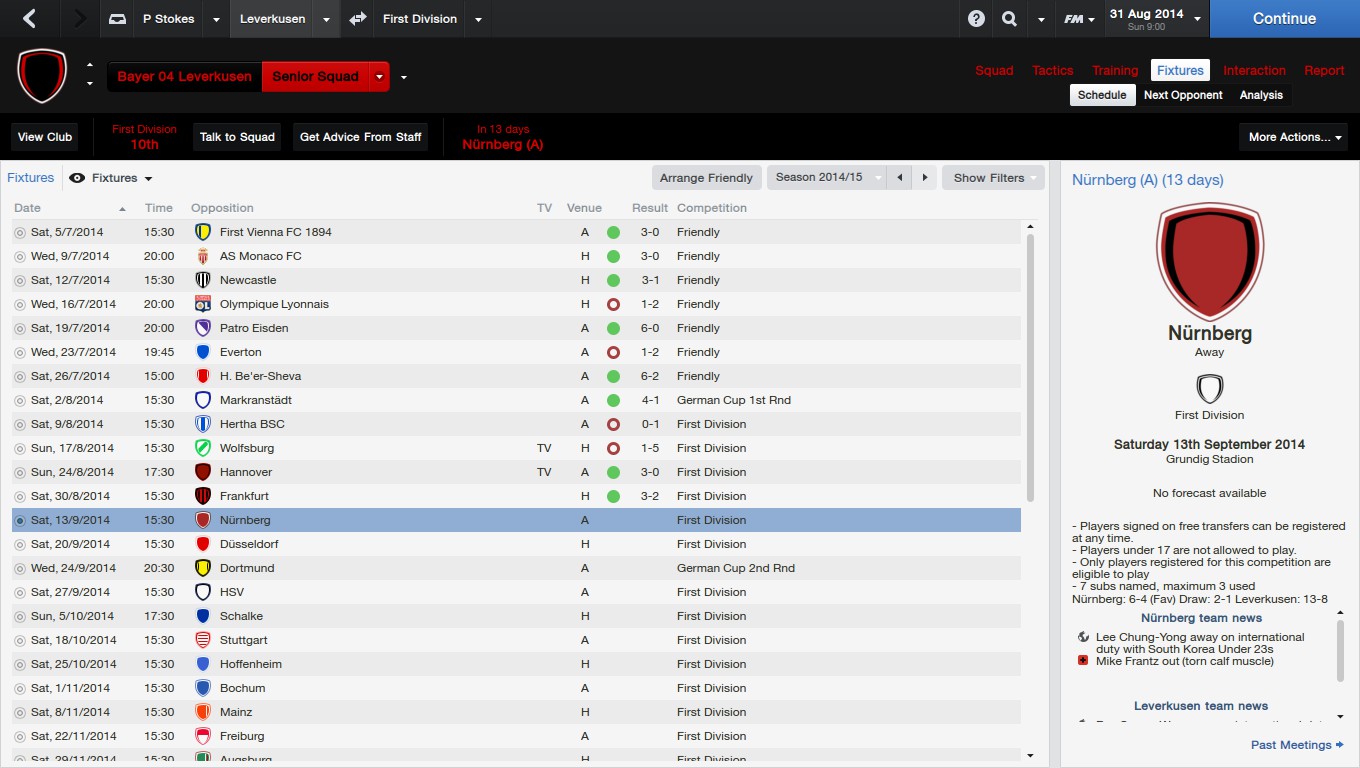 So, August is complete and a real mixed bag of results. A decent preseason followed by a good cup win away from home looked to have given me a solid foundation to build on for the season. However an absolute worldie against Berlin and some very poor defensive performances led to 2 awful defeats in my opening two games of the season. A slight tweak to the tactics (a 4-2-3-1 which I will post at some point tomorrow when I'm fully happy with it!!) meant a change in fortunes. An excellent away victory against Hannover (a team tipped for the top 8) and then a superb comeback win against Frankfurt has put me back on track. Admittedly I shouldn't have been trailing to Frankfurt but I don't seem to have nailed the systems for the team just yet. 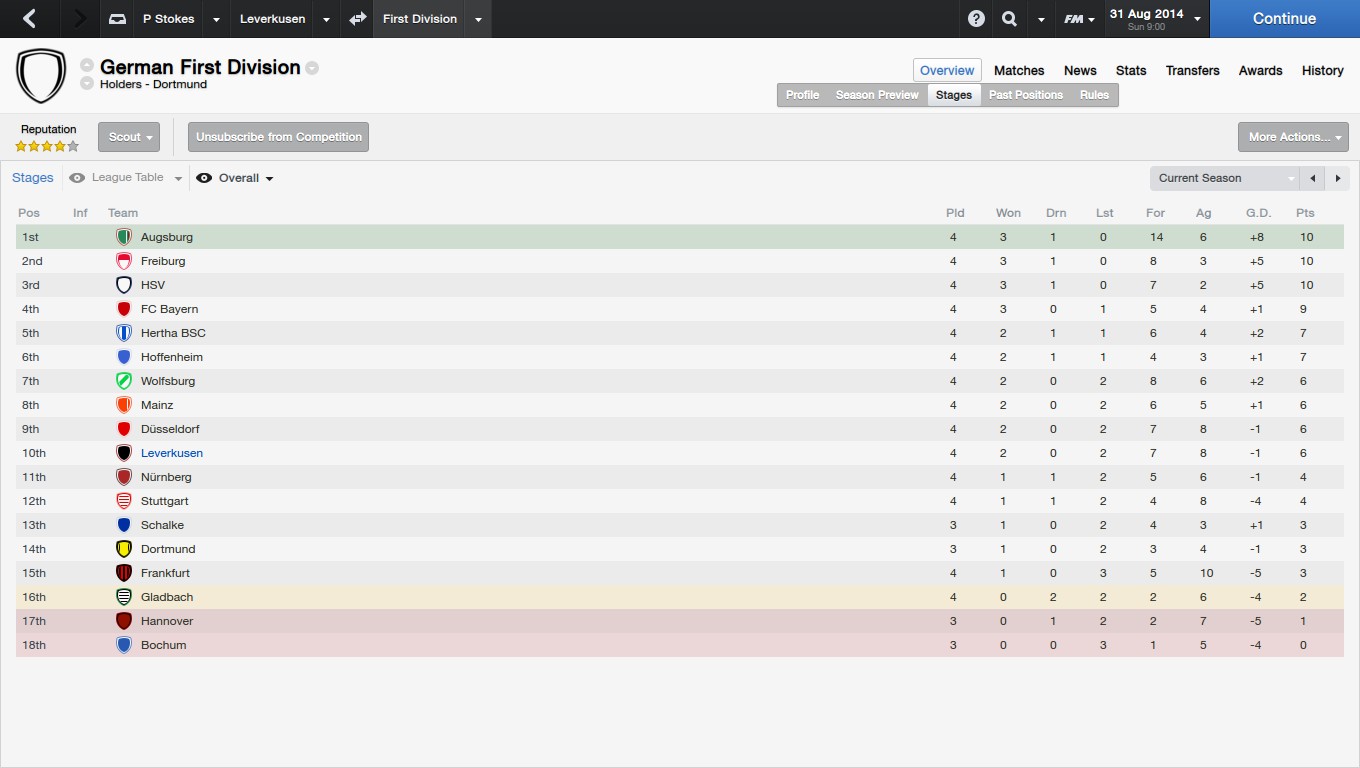 Plenty of time left in the season but two defeats from the first four is not how I wanted to start. Much work is to be done!!
Login to Quote

Cheers mate!! I thought this challenge idea would fill the few months we have left until FM15 comes out. I've got 6 weeks off work now so I should be able to make a good go at it!
Login to Quote 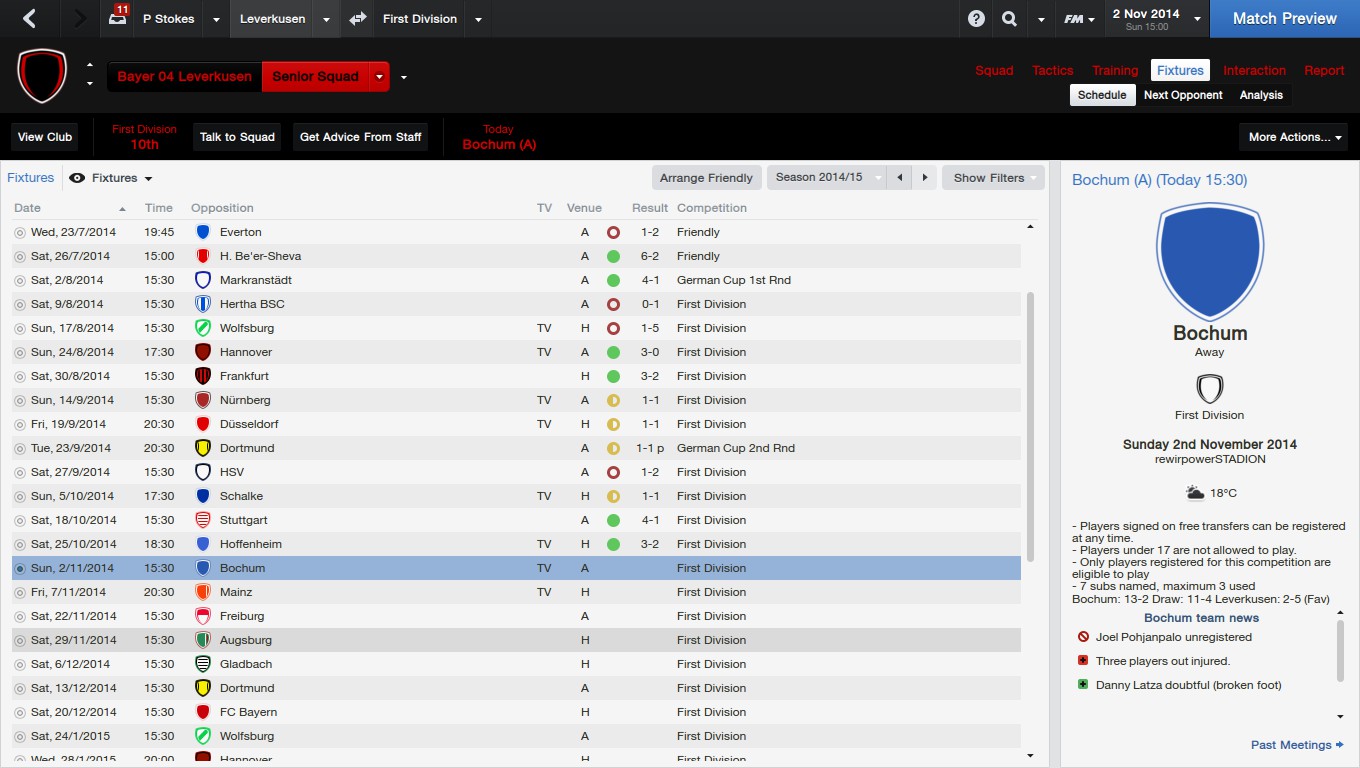 A very up and down run of form so far. My team appear to have a pretty good attitude and don't often give up when they go behind (which is a bit too often for my liking). A few little tweaks to the tactics have produced two excellent wins in my last two games. Stefan Kießling is on fire with almost a goal a game and a few assists. Jovetic is blowing hot and cold whilst my late loan signing Thorgan Hazard is playing pretty well. 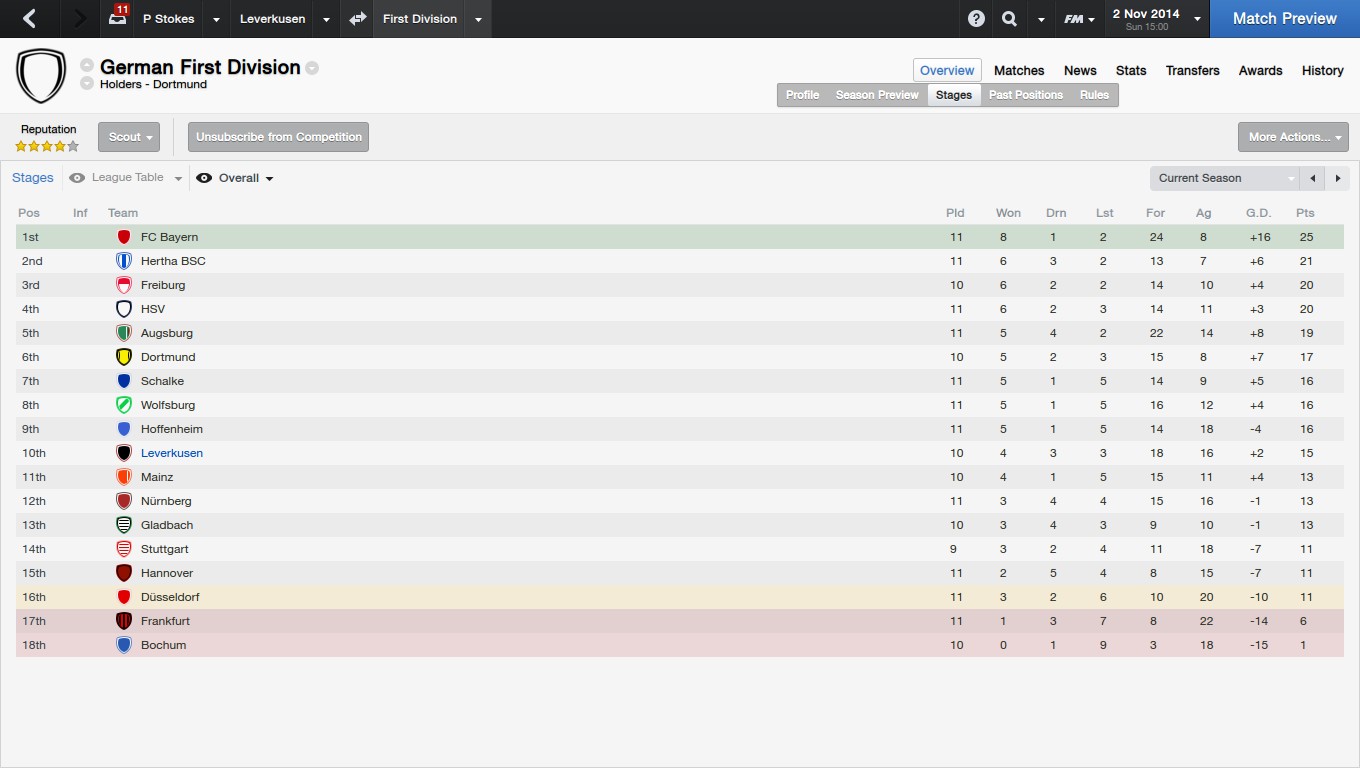 Despite a decent run of form, the league table is still not really looking like I want it to. I will need to string a good run of results together to push myself up the table by Christmas in order to mount a push for the top 3 by the end of the season.
Login to Quote

Justice
5 years
Still plenty of time to turn it around, I reckon you have it in you

I hope so! The inconsistency is killing me. Also, the fact that some of my supposed key players just don't perform is so frustrating. Lots of jobs keep coming available but I know that I won't get a look in (now and in the future) if I don't show any loyalty to a club. I'm caught between a rock and a hard place!
Login to Quote 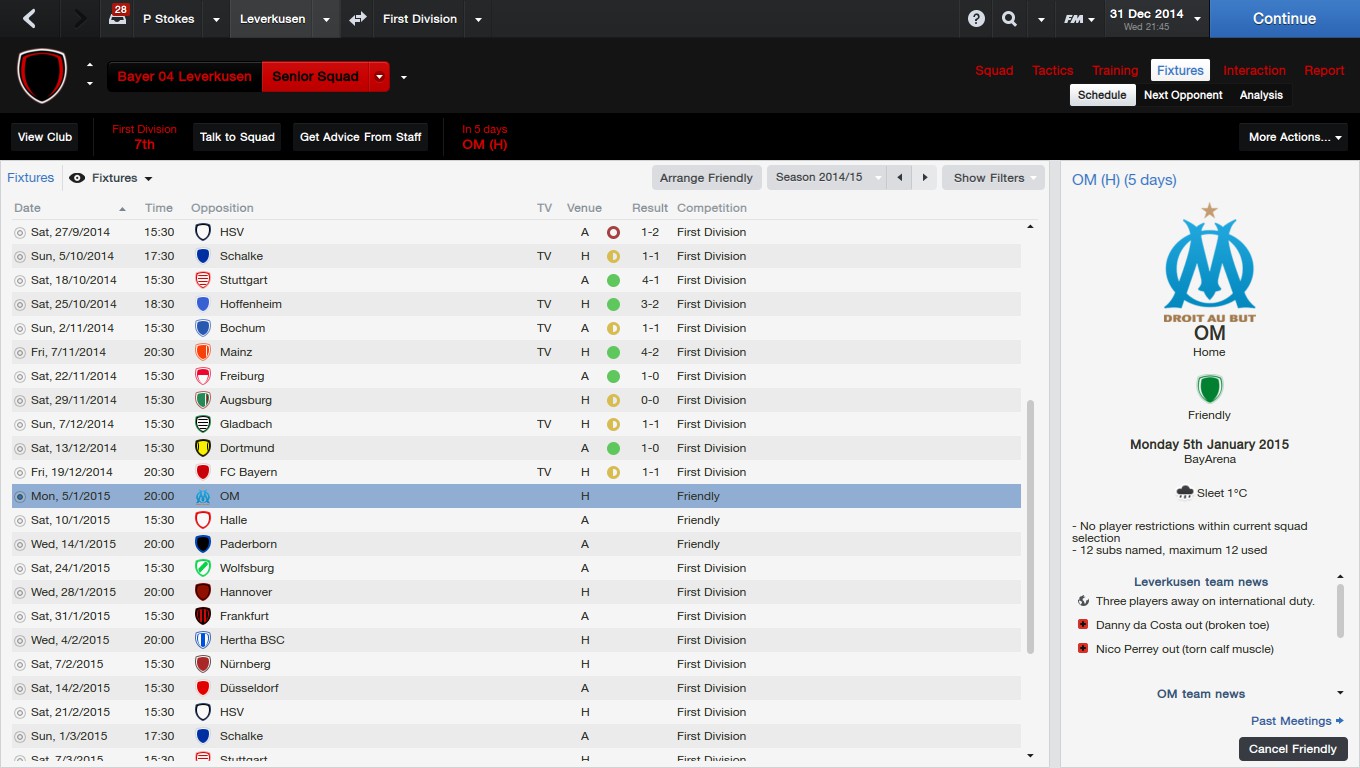 Still unbeaten since losing to Hamburg. Two very disappointing draws at home to Augsburg and Gladbach the negative points. However, a terrific 1-0 away win against Dortmund and a draw which so easily could have been a win against Bayern meant a good end to the first half of the season. I now have a few friendlies during the winter break to keep my players fit and ready for the second half of the season. 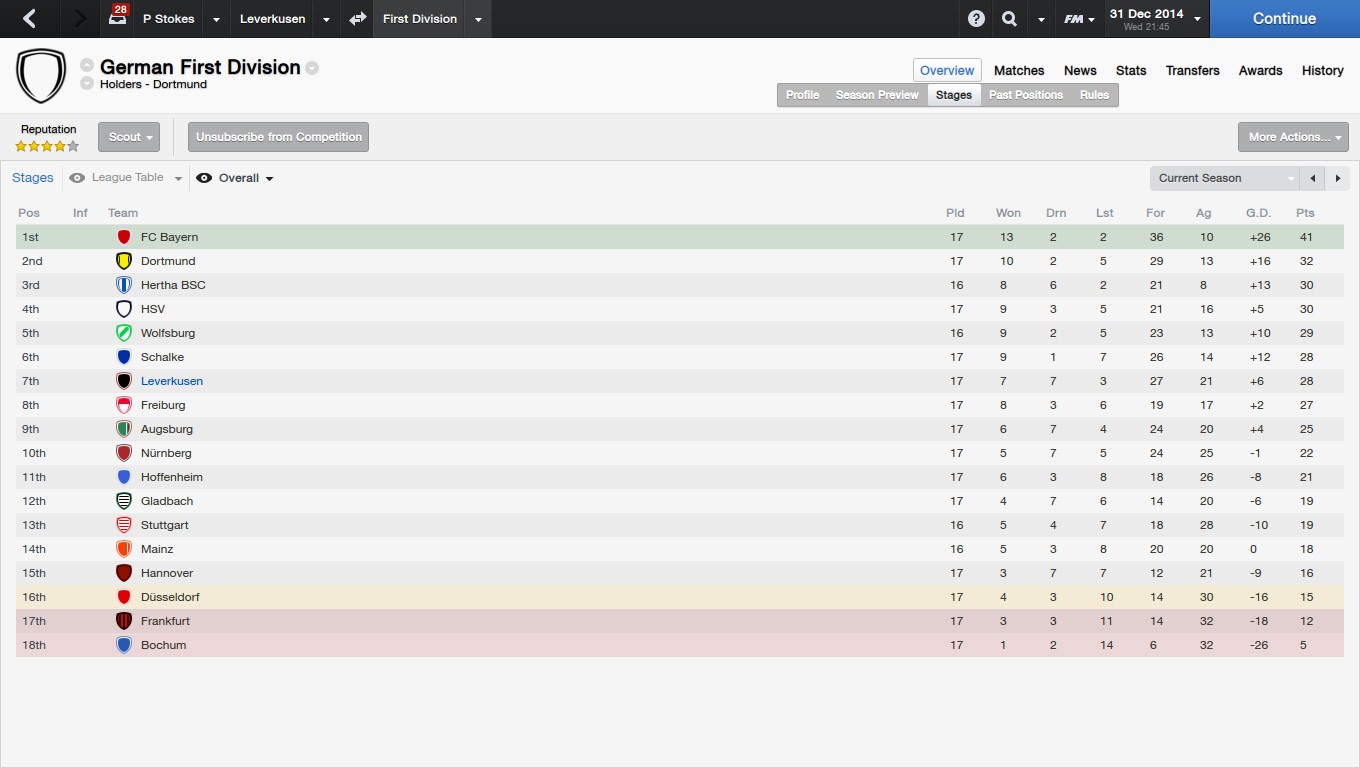 13 points off the top so the title is looking a long way out of reach. However I am only 4 points off of 2nd and I have the beating of Dortmund so this could still turn out to be a productive season.


As promised, below is a screenshot of the tactics I have settled on. 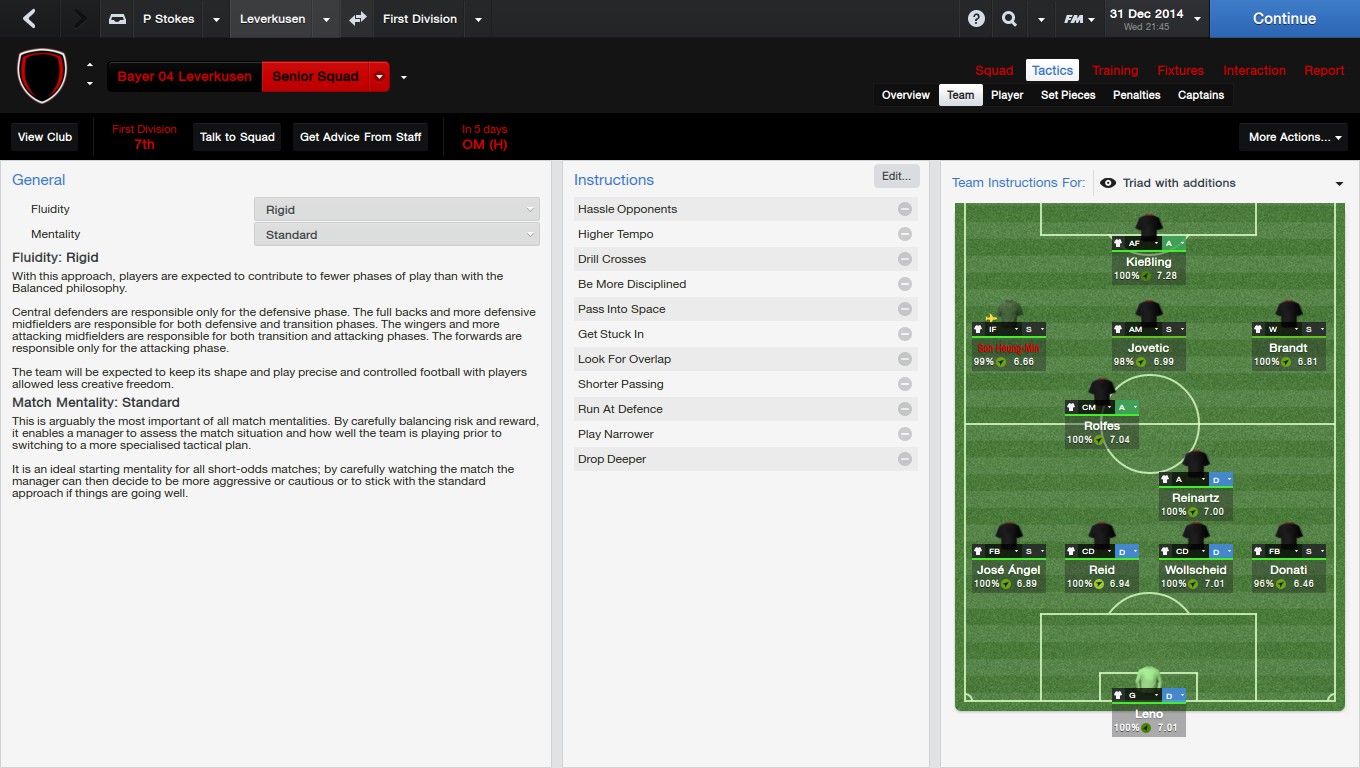 It is a tactic I downloaded (a little bit of a cheat I know!!) back in December on the original version of the game (I can't remember what website or who created it I'm afraid). It worked a treat back then however it wasn't as effective on the more recent updates of the game. Therefore, a lot of tweaks and adjustments have been made over the last few months to get it right. I won the World Cup with England and also with Nigeria in tests for the tactic so I'm pretty happy with it and now it seems to be clicking with Leverkusen although not quite to the same effect.
Login to Quote 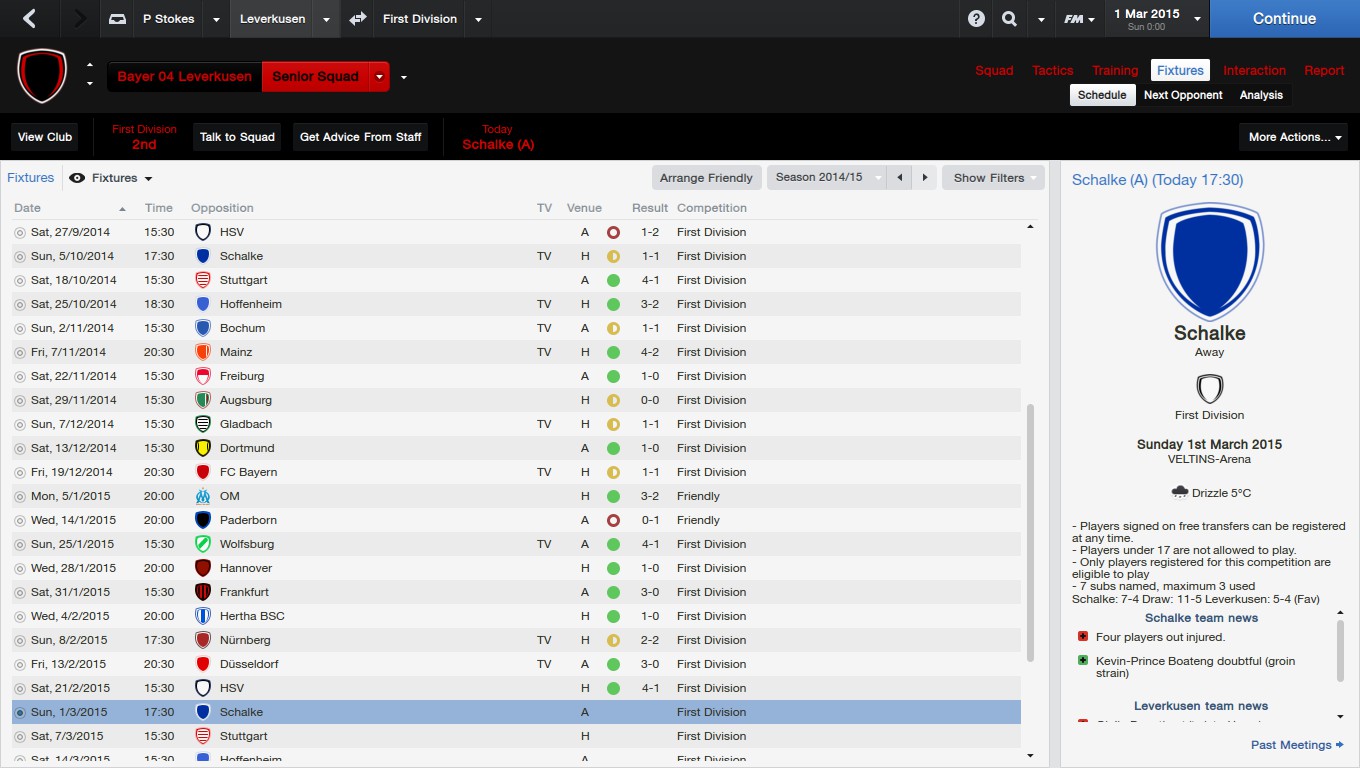 An excellent run of results after Christmas, only slightly marked by a 1-0 friendly defeat to Paderborn where I played a pretty young and inexperienced team. The draw against Nurnberg was a frustrating one as I lost Bernd Leno and Giulio Donati to injury just before the game so had to break my settled back five for the first time in about 20 odd games. 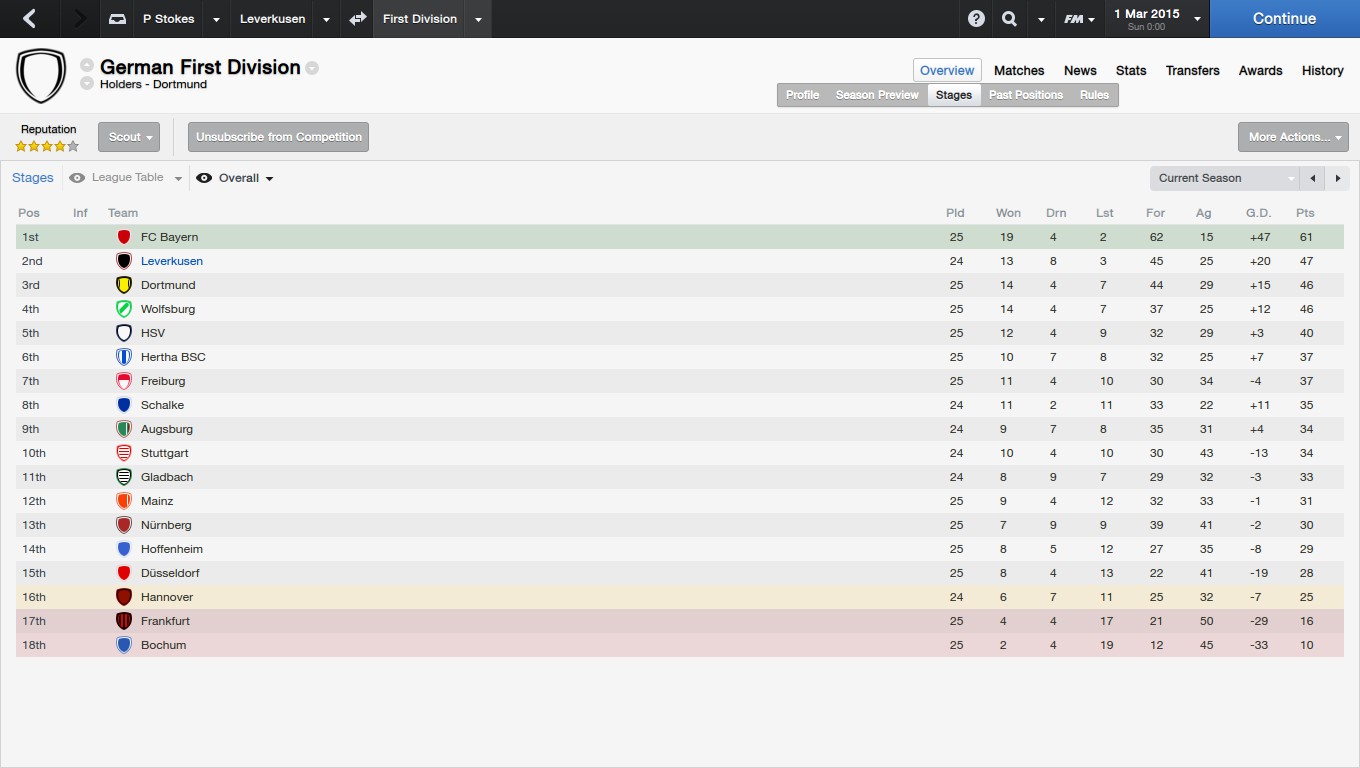 Thanks to my brilliant run of form, I have jumped right up to 2nd in the table. Unfortunately Bayern are on it and are absolutely running away with the title. However, as I said earlier, a top 3 finish would be a fantastic achievement after the club's disappointing campaign last season and the sale of some key players. Depending on what jobs are available, a good finish could enable me to get a good team but I have a feeling I may be staying at Leverkusen for one more season. I have my fingers crossed for some big clubs losing managers to other teams!!
Login to Quote 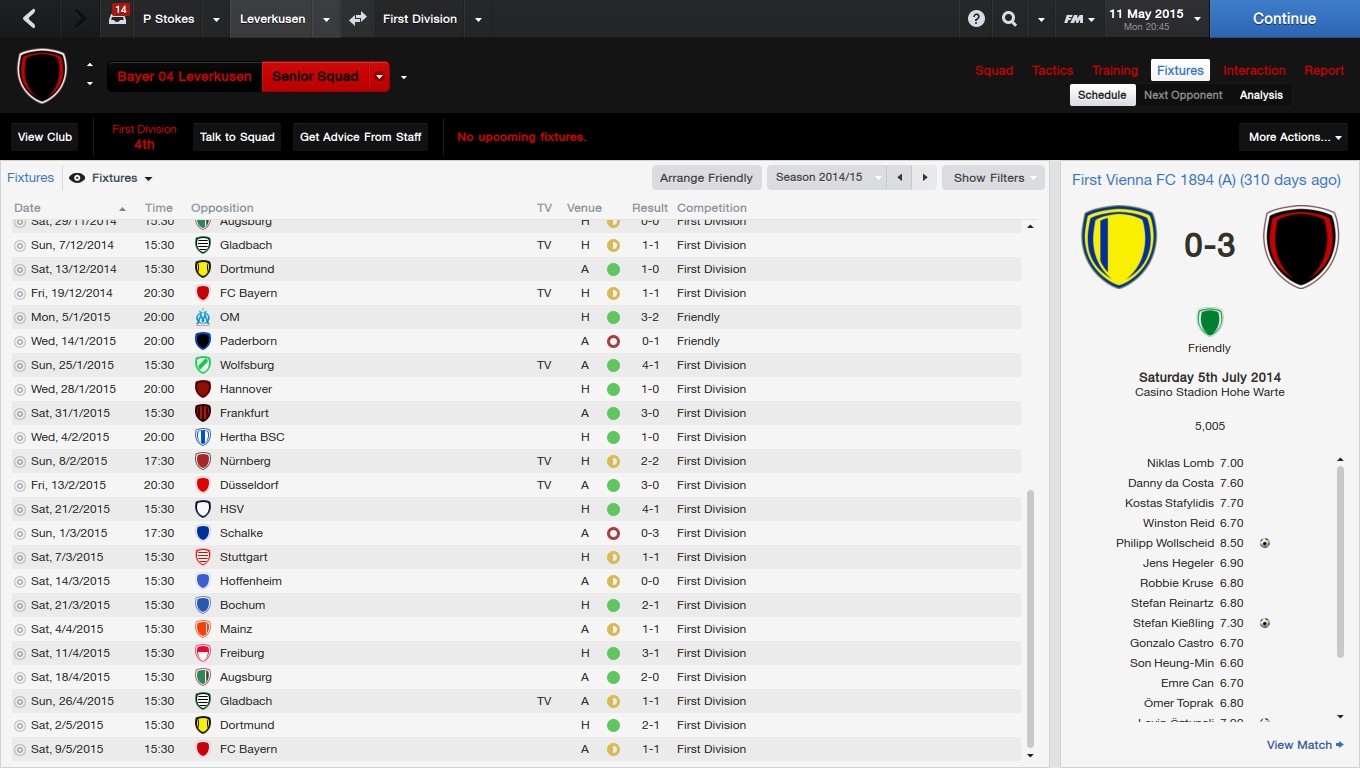 A decent end to the season but a few too many draws didn't help matters. An excellent comeback win against Dortmund and then a late equaliser against Bayern was a pleasing way to end the campaign. 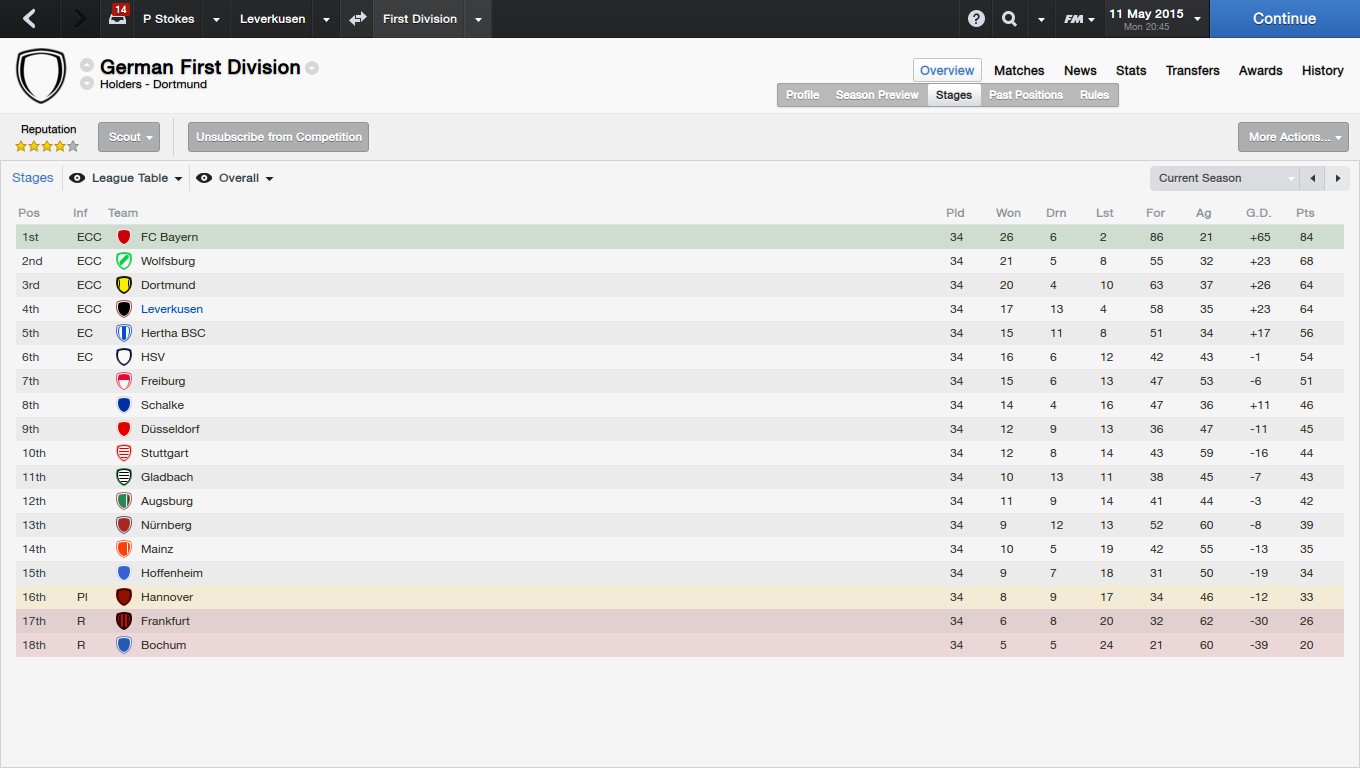 A good season considering expectations after Leverkusen's last campaign. I have managed to bring Champions League football back to the club which was one of the aims I had at the start of the season.


The hunt for a job


As I said in an earlier post, despite doing well with Leverkusen, it is pretty clear that I will struggle to win the league with the club when Bayern and Dortmund are in the league. Therefore, I am on the look out for a new club. Exceeding the club's expectations will help with this.

Happily, a message has arrived in my inbox to say that AC Milan have sacked their manager. They finished 8th in Serie A but have a better repuation than Leverkusen and are only a few good signings (and a good tactic) away from winning the title. This seems a more realistic task for me.
Login to Quote

The hunt for a job (continued)


AC Milan offered me an interview for their job post which I undertook. A few days later, I get this message: 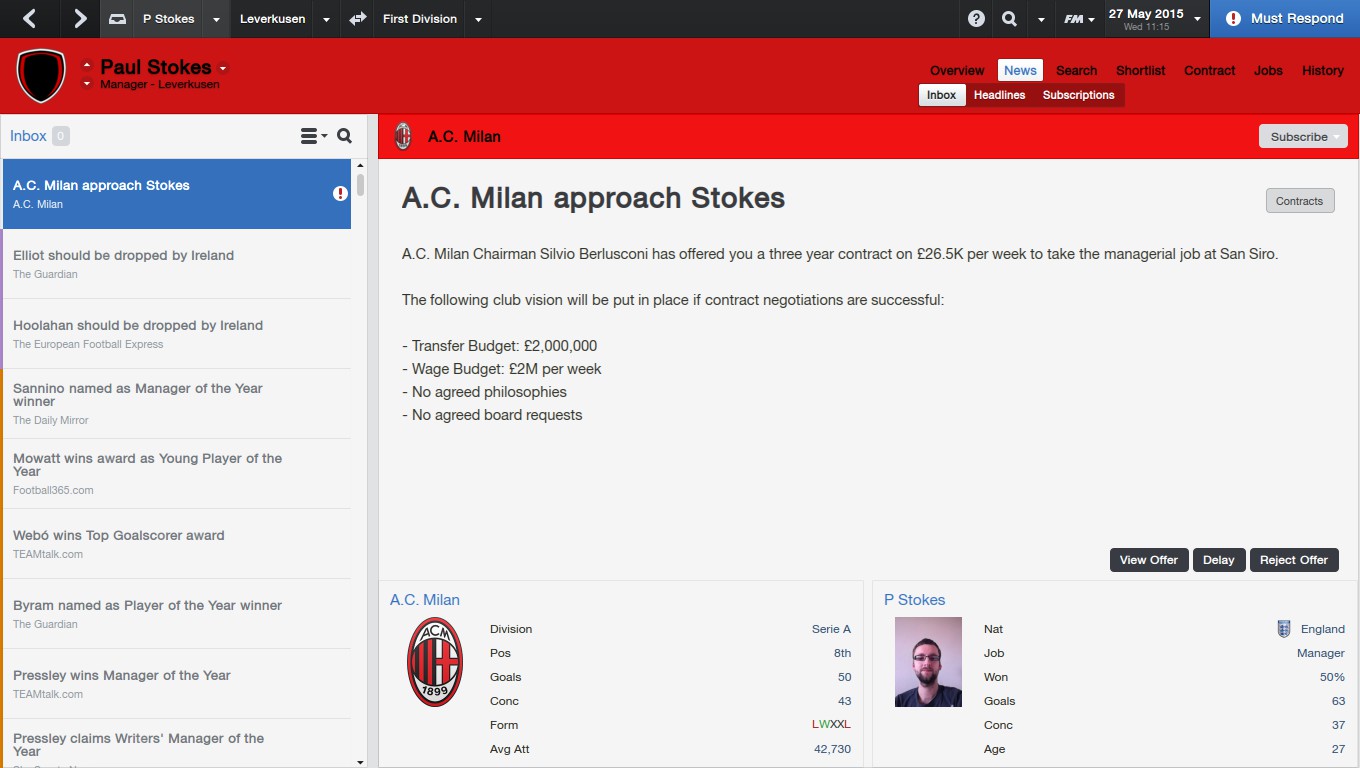 I have accepted the offer. Despite having a lot of confidence in my ability on the game, I'm not convinced I will win the title with Leverkusen next season. I will go back to Germany if I can get a shot at the Bayern or Dortmund jobs once I've (hopefully!!) won the title with Milan.
Login to Quote