Xander
7 years
Good update some solid transfers and hopefully you can get some more good results with them.
Login to Quote

With manager Tony Young determined to keep his side focussed over the mid-season break, Dresden were hard at work while the other teams in the league take a break, ahead of the final 15 games of the season.

Against Argentinian side Estudiantes, Leandro Sandoval, a new signing from the Argie side, came back to haunt the side who kept him in the reserves for two years, as he broke repeatedly against the defence, scoring twice. Youngster Felix Richter also played a major part in the match, setting up one of Sandoval's goals, and also providing a sublime assist for the side's 3rd goal; laying the ball back across the goalmouth for Fiel to rattle past the flat-footed goalkeeper.


The second match of the month, against AA Gent, was a relatively easy game for Dresden, as goals from Kempe, Auodia and Dedic saw off the weak challenge of the Belgian side. Overall, the standard of play on show from Dresden was high; the passing game which Tony Young has been so fond of, showing that it is truly paying off.

In the final match of the triple-header, Bayern Munich's reserve side came to town, but were not expecting the onslaught that Dresden threw at them. New loan signing Marti Riverola took on 3 Munich players before lifting the ball over Andreas Rossl in the Munich goal. Dresden's defence held strong, despite several good Munich attacks, and Robert Koch scored a sublime volley from 30 yards to seal the deal, and seal an unbeaten month for Dresden, ahead of the second half of the campaign.
Login to Quote 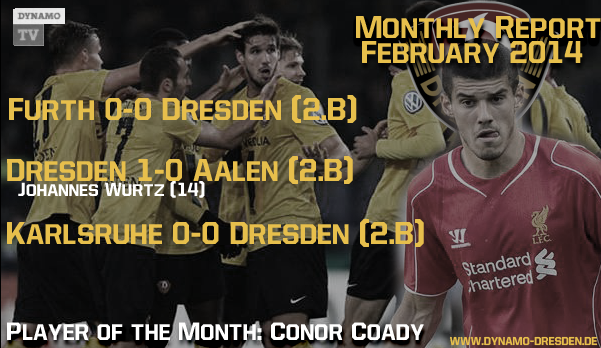 February was an inconsistent month for Dresden, as they struggled to draws in the first and last matches of the month, but coasted to a 1-0 win against Aalen, courtesy of a 14th minute strike from Johannes Wurtz.

New signing Conor Coady was one of the few Dresden players to impress: his work ethic and proficiency in the tackle were one of the sparse few things to encourage fans this month: his passing success rate was at an average of 87% in the last 3 games, bringing his season average (combined with Hartlepool, where he spent the first half of the season on loan) to 79%, which, incidentally, is higher than both Lionel Messi (67%) and Xavi (74%), while he is just behind Arsenal's Aaron Ramsey (81%). However, while comparisons to such greats would be wildly out of step, Coady has certainly become a hit with fans, while team-mate Zlatko Dedic is out of favour, despite his prolific record, having not found the net in four games, since his goal against AA Gent.

If Dresden are to keep the pace, they will have to break out of this inconsistency and push themselves to the very limit. Are they capable?
Login to Quote


Ok guys, so I start my new job tomorrow, so it might be a couple days before there's any new updates on this: but thanks for the support, and if you're a new reader, please take the time to read from the start and leave me some feedback: I'm always looking for ways I can improve

Much love
Login to Quote 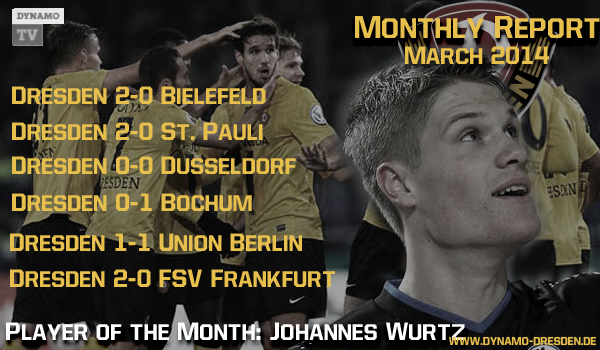 With only 12 games of the season remaining, Dresden fans were desperate for some good performances this month, as their odds-defying club aimed to consolidate their place at the top of the table, and the £14.5m prize pot that goes with 1st place.

Their side certainly didn't dissapoint in the first game of the month: With Zlatko Dedic injured for 3 weeks, loan star Johannes Wurtz stepped up to the plate in the striker position, and he impressed, linking well with Leandro Sandoval to cause a constant problem for the Bielefeld defence.

Dresden's first goal was the result of some gorgeous interplay between Coady and Sandoval, which ended with Coady lofting a ball over the Bielefeld defence for Wurtz to latch on to. the 21-year old loanee wasted no time in lashing the ball into the back of the net, past the despairing hands of Fabian Klos.

Just before half-time, Sandoval added a second goal, and it was an outstanding individual effort as the Argentinian, a January signing from Estiduantes, beat two players before lifting the ball into the top corner of the net to seal the victory, and secure Dresden in the promotion spots.


Against St. Pauli, Wurtz was once again the key man, scoring after 70 minutes to put his side ahead with a long-range effort which dipped just under the crossbar to bamboozle Heerwagen, and put Dresden 1-0 up. Bernardo Corradi then scored his 3rd league goal of the season, with a typical poacher's effort from 4 yards: a simple tap-in after a Filip Trojan corner was flapped at by Heerwagen as he shot off his line.

Flying high, and top of the league, Dresden fans were starting to dream. To dream of promotion, and the kinds of players which would come with that promotion, and the money. From television and prize money, promotion would net the club at least £15m, invaluable, as they are currently thought to be in around £2m of debt, and placing a lot of faith in the 37 year old Englishman who had taken over as a complete unknown.

However, in the next three games, the wheels threatened to come off. An uninspiring draw at Dusseldorf was followed by a 1-0 home defeat to Bochum, who are snapping at Dresden's heels in the race for the top, and only a late goal from Johannes Wurtz saved their blushes against Union Berlin; the 21 year old beating the Berlin defenders to a header from a Riverola corner after 79 minutes.

With one more win, Dresden could finish the month in 3rd; and in the promotion spots, as long as they beat Frankfurt by two or more goals. With Dedic returned from injury, and lining up alongside Aoudia, Wurtz was given a break, as he dropped to the bench for Riverola and Kempe to play in the attacking midfield slots, while Brazillian Kleberson partnered Coady at defensive midfield. Despite some skepticism from the stands, they were changes that worked. Aoudia scoring within 3 minutes to send the Dresden fans into raptures: a daisy cutter from 20 yards which left Klandt flat-footed.

Dedic, the fan favourite at the spearhead of the attack, cemented that status with an excellent run from deep, before playing a slick 1-2 with Coady, before firing the ball home to make the score 2-0 to Dresden, and put Frankfurt on the back foot just before half time. Despite some heavy pressure in the second half, Kelberson and Coady held strong in front of the defence to see out a 2-0 victory for Dresden, and put them into 3rd place in the league, with 6 games remaining. 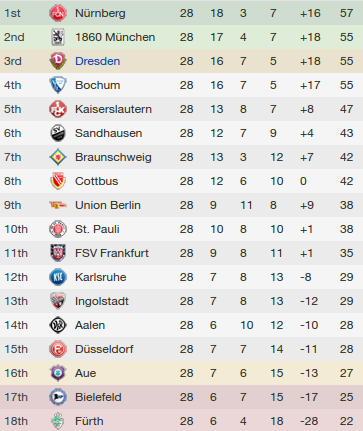 http://www.sportfive.com/uploads/tx_templavoila/dresden_03_b.jpg
Party: The Dresden Team Thank Their Fans After An Incredible Season

Despite his Dynamo Dresden side missing out on promotion by just three points, English manager Tony Young is a man in demand: Werder Bremen, Stuttgart and Leverkusen are all thought to be in pursuit of the man who turned some relegation dodgers into heroes in the eyes of their fans, losing only 8 games all season.

Bremen finished 8th in the Bundesliga, which by all accounts, isn't a terrible season, whereas Stuttgart found themselves only 9 points away from a relegation play-off in 15th, with Leverkusen not faring much better, finishing in 12th place this season.

Young has so far declined to comment on any specualtion, and will no doubt be waiting to see how the Dresden board approach their pre-season preparations, with the club reportedly receiving a £10m prize pot for their league finish under Young. Only time will tell if that money will be reinvested into the club, or used to improve the squad. However, we caught up with fan favourite Zlatko Dedic, who had this to say:

"What Tony has achieved here this season is incredible: some of us had no idea we were capable of these heights, and long may it continue: i'd be tempted to say the man is already a club legend, but that may be premature. It would be excellent to be able to build on this season and challenge again next year"
Login to Quote

Young: My Future Is In Dresden

Amidst Rumours of his impending departure, Dynamo Dresden boss Tony Young has acted to put fan's minds at rest, telling bild.de that "My future is certainly at this club - We have come so far this season, and I intend to build on that success, and challenge for promotion once again. the bar has been raised, and we need to work hard to meet that standard this season."


Young was speaking as the club unveiled their new kits for the 2014/15 season, as they push for promotion to the Bundesliga, and was flanked by his squad at the announcement, all of whom bore broad grins at the news their coach was to stay at the club.

The club's 2014 kits will remain unchanged, as the club secured sponsorship extensions which will see the revenue continue through 2014/15, with a view to further extensions in the future. The club's board have declared themselves delighted, and suggested that the revenue may be made available for transfers.
Login to Quote

You are reading "Dynamo Dresden: Ghosts Of The East".