Whitehawk Splash Out As Market Opens 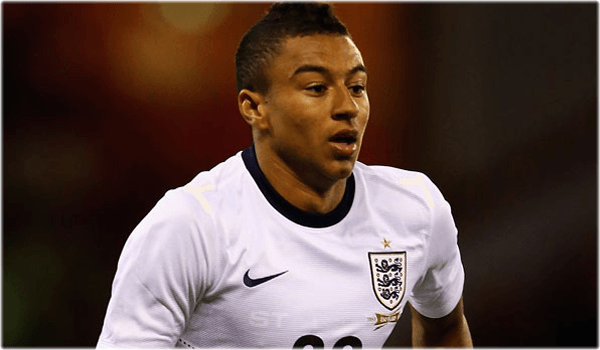 Whitehawk marked the opening day of the summer transfer window with two signings in Jesse Lingard and Conor Thomas, from West Brom and Sheffield United respectively. The two Englishmen cost the club a grand total of £7.7M altogether and are expected to play important roles in the club's second Premier League season following an exciting debut campaign.

Whitehawk have smashed their transfer record which was previously £450k for Tommie Hoban back in January. While both Lingard's and Thomas' fees breached this figure, the latter cost the most in Whitehawk's history, at £4M. This is just the start of what is expected to be a very busy transfer window for Whitehawk and manager Prince William, as he has infinite resources to prepare for next season. 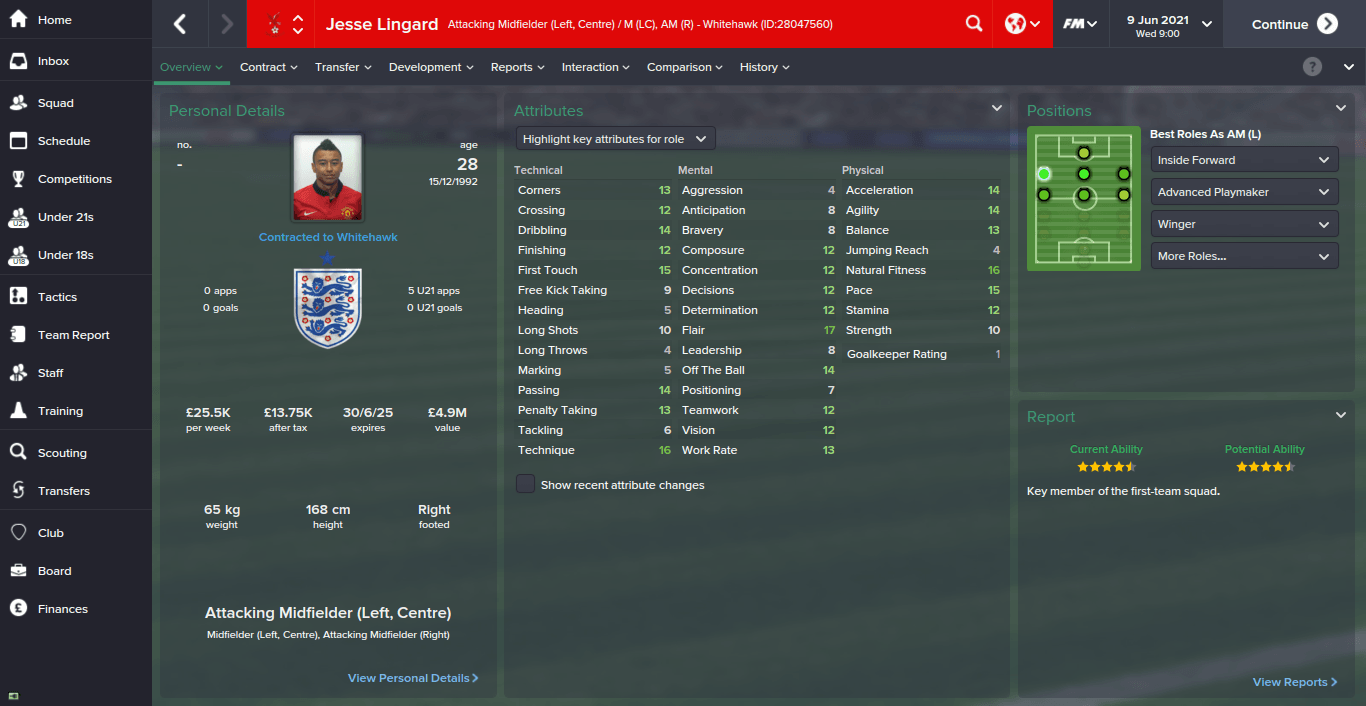 Jesse Lingard is certainly a very exciting for this football club as we look to strengthen our attack for the upcoming season. With James McClean past his peak and Kevin Griffiths expected to play in a more prominent striker's role this season, we needed a quality left winger and Lingard is certainly one. He enjoyed a decent last season at West Brom but failed to spark any sort of form in the Championship. This season, he will be given the freedom to be creative and use his flair to work chances for himself and others. Personally, I cannot wait to start working with this guy! He is a similar type of player to Junior Stanislas except younger and fresher in ideas. I just know that he will shine! 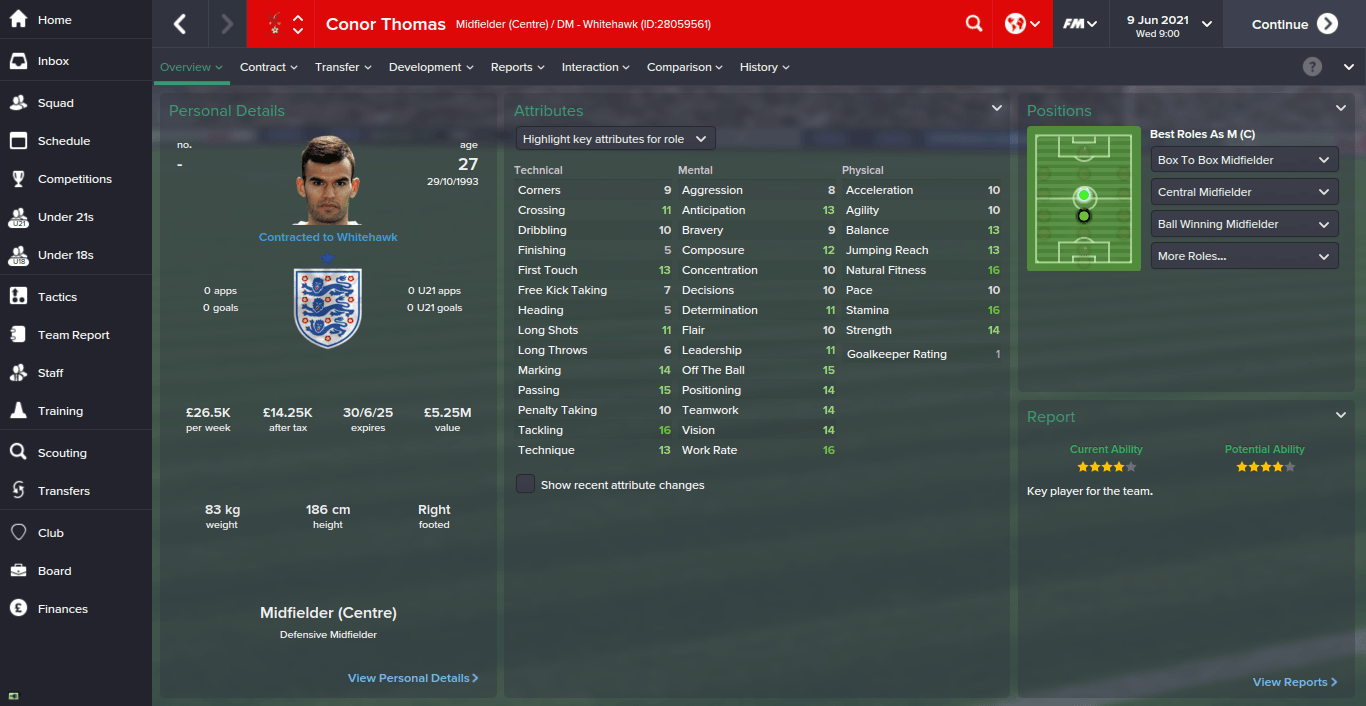 This guy was an absolute bargain for us. Just looking at his attributes, you know that he has Premier League quality in him. While his decision making might not be the best at times, he has great technical attributes for an all-round midfield maestro and he will be a big boost to our midfield, which needed a face-lift from last season. Thomas has a very high work-rate and is a very fit player. He is good on the ball and is a great tackler. The ideal ball-winning midfielder for us!

Justice
5 years
Cappy13 & Lynchy, thanks guys! And yes, the money helps a lot 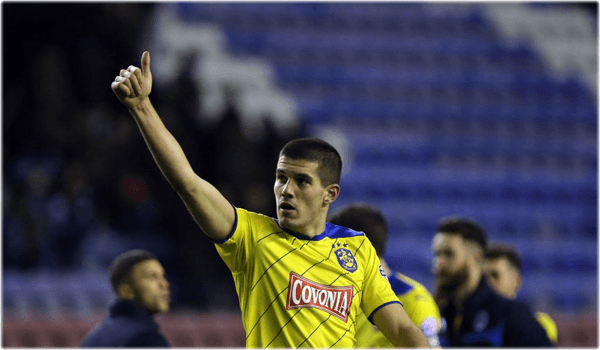 The cash continues to roll as Whitehawk signed three more players to their senior squad this transfer window. However, none of these signings were in the same price range as Jesse Lingard (£3.7M) or Conor Thomas (£4M) who had both signed for the club recently. Stefano Sensi (£700k) joins from Italian Serie A side Catania, while Stuart Bannigan (£875k) and Tommy Smith (£425k) joined from Reading and Fulham respectively. This takes Whitehawk's total spending so far this window to £9.6M, with a month and a half left to spend even more. 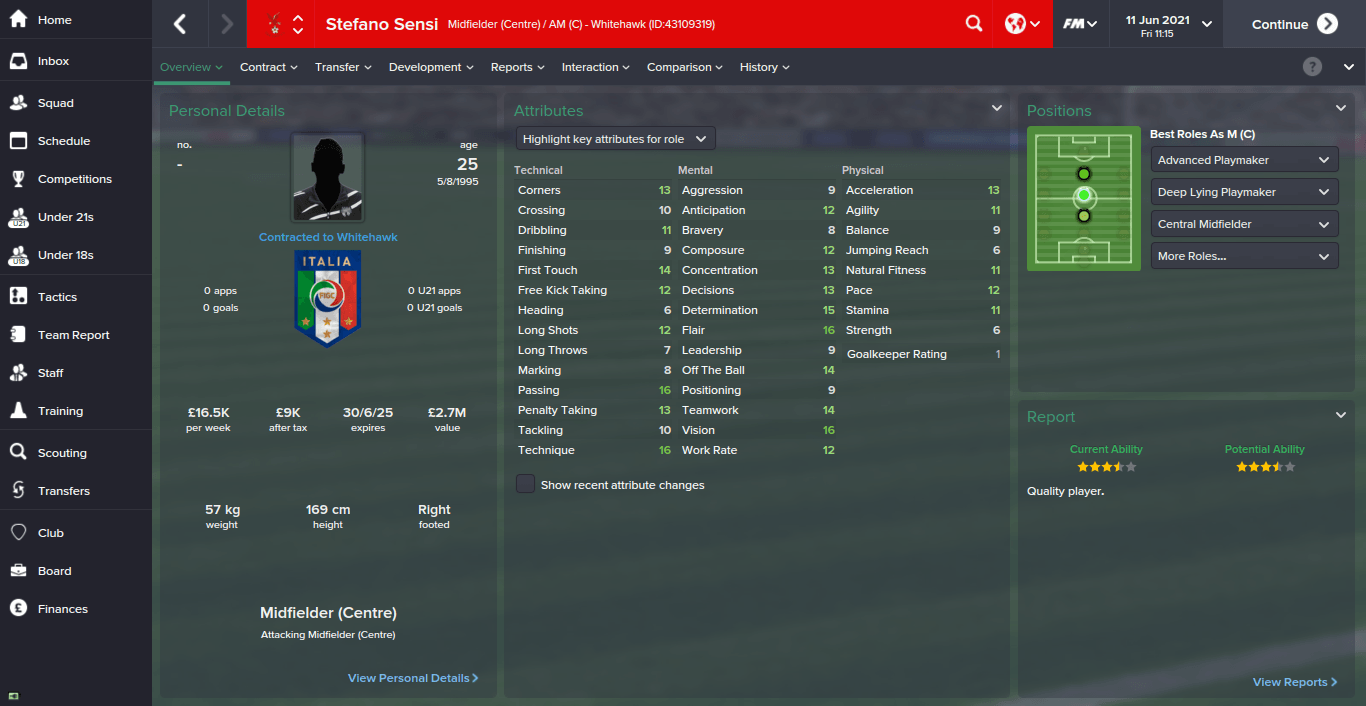 The Italian playmaker becomes our second midfield signing of the transfer window, following Conor Thomas. However, Sensi brings a very different style of play to our club and is very much a creative gem. His passing range and vision make him a focal point to attacking moves, while his technique and flair for the impossible make him a cunning character on the ball. Having played a key part in helping Catania earn promotion to the Serie A once more last season, Sensi was destined for bigger and better things and I could not resist signing this Italian maestro. 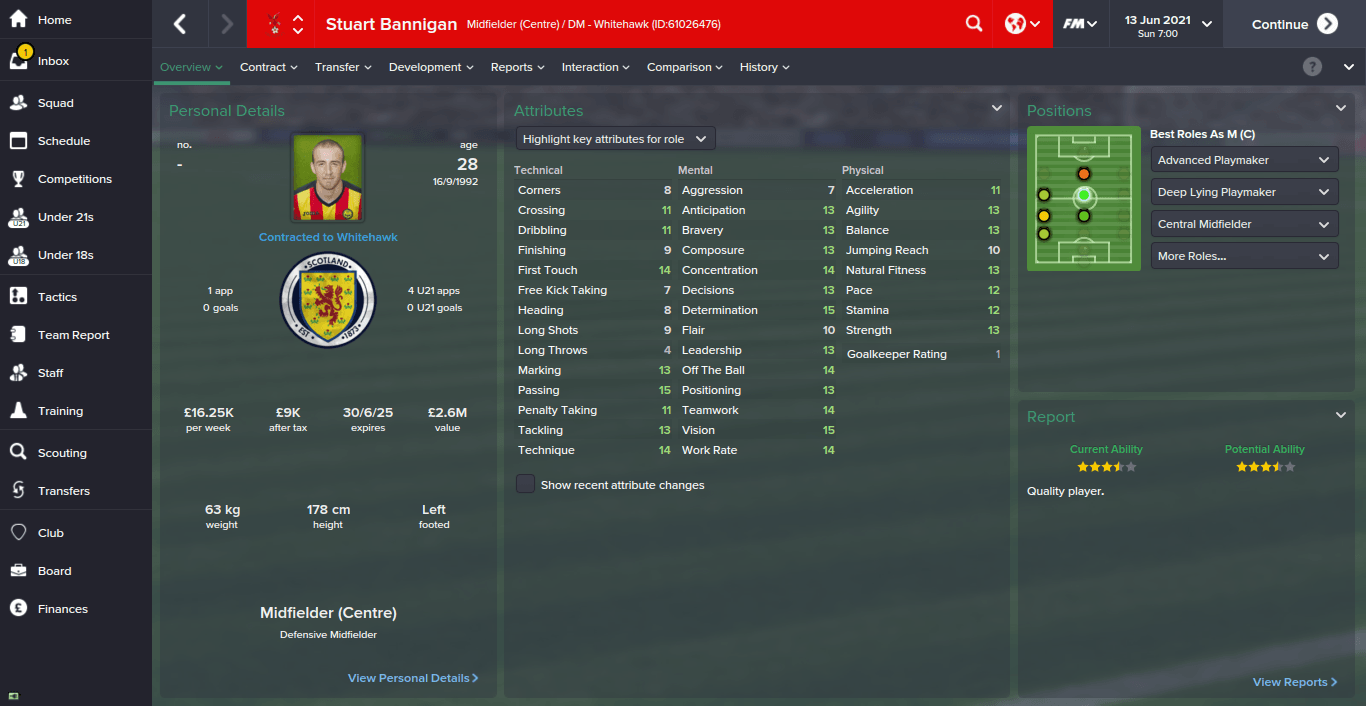 A midfield overhaul was on the agenda and Bannigan adds to a side which now contains Conor Thomas and Stefano Sensi. I felt at times last season that we lacked a little bit of creativity in our midfield, despite having Dabney dos Santos Souza in our ranks, and so I brought in a few playmakers. Bannigan is an all-round midfielder but his real strength is his passing range and vision. He will certainly add to our midfield talent and will hopefully play well when called upon. 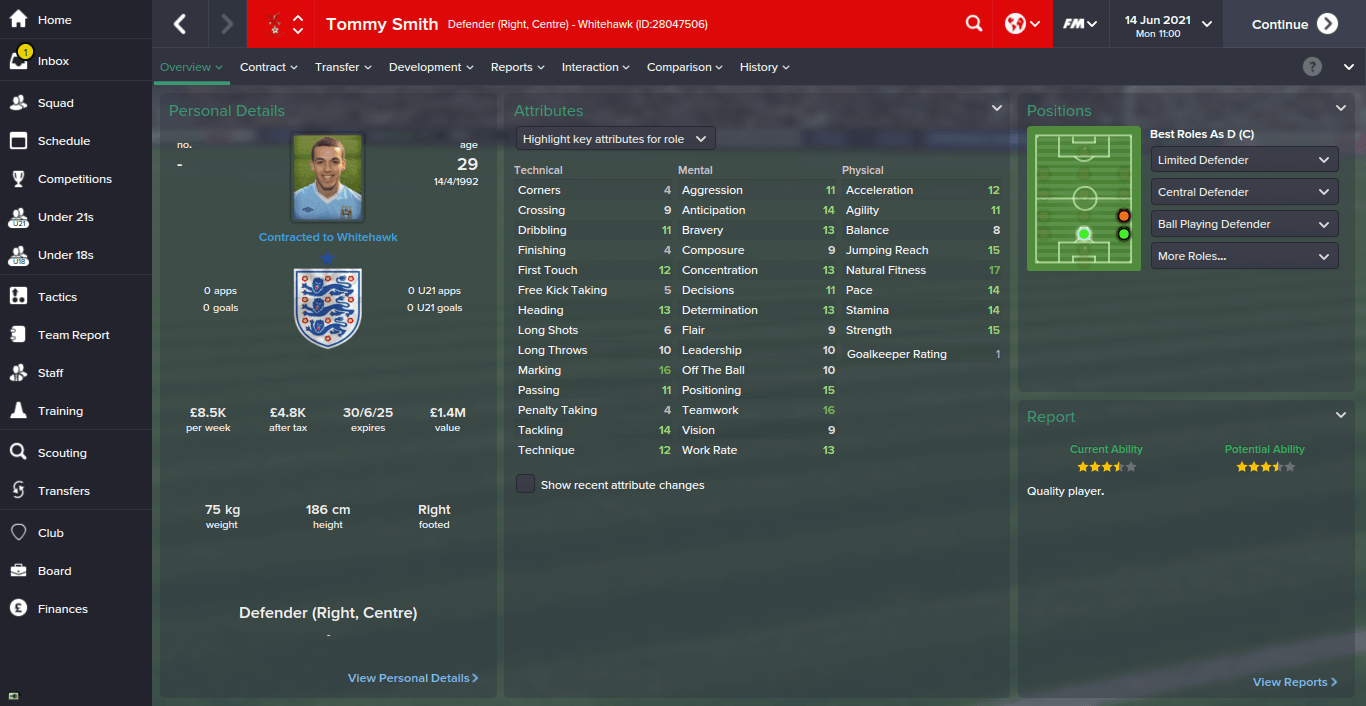 Tommy Smith is a consistent defender and one who can play in the middle and on the right. Smith established himself as a seasoned Championship veteran with Huddersfield before moving to Fulham and the Premier League in 2019. He played a big part in his first season but failed to play once last season as he was forced out by manager Brian McDermott. Smith's strength is his marking ability and he will be a key defender for us this season.

OMGItsToddzy
5 years
good signngs there, Up the hawks
1
Login to Quote

Oz96
5 years
Some fine deals you have got but Sensi needs some damn work on his physique, man.
1
Login to Quote

Justice
5 years
OMGItsToddzy & Oz96, thanks! Yeah, Sensi isn't the most physical but my players play with the ball, not their bodies 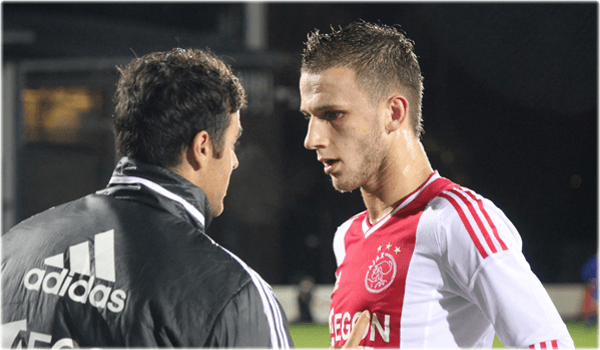 Whitehawk brought in two more signings as their squad nears completion. These two players were Branco van den Boomen (£6.25M) and Giuseppe Prestia (£800k) from Willem II and Bologna respectively. This brings Whitehawk's total spend so far to £16.65M, with plenty more left in the bank. 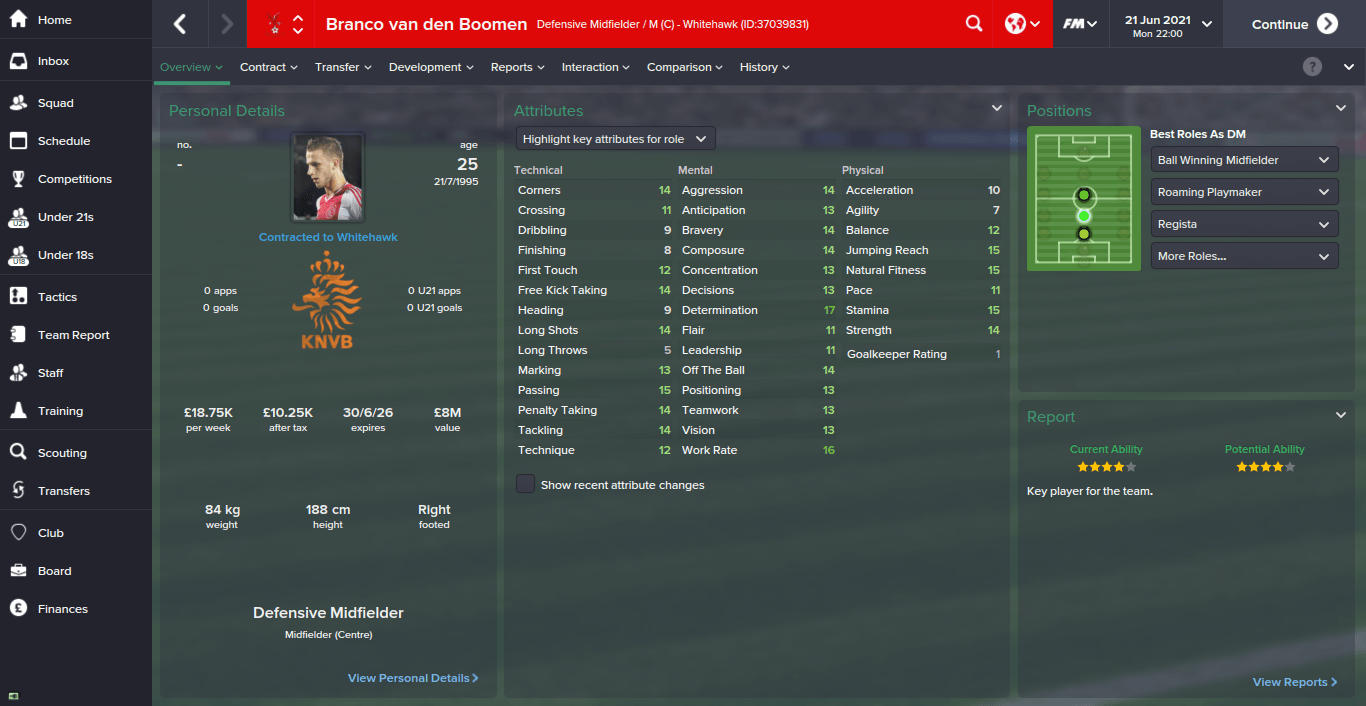 We lacked a quality defensive midfielder in our team last season as Medo and Furstner struggled with life in the Premier League, although they were useful to their credit. Branco was a key player for Willem II in the Eredivisie since 2017 and possesses all the attributes of a great technical defensive midfielder. He can pass, he can tackle, he's strong, fit, intelligent, tall, experienced and determined. He is my favourite signing so far this season and I hope he will shine for us. 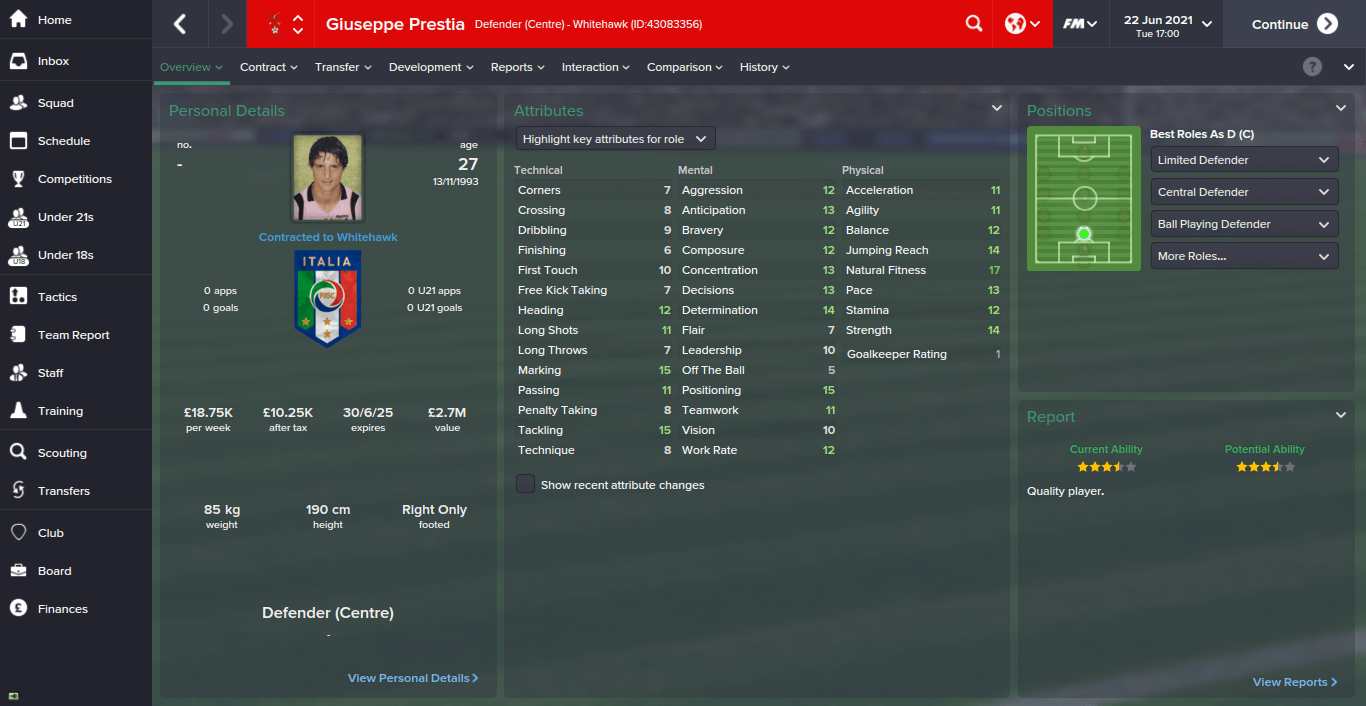 I had money to spend and I wanted to upgrade on current defenders while I could. Prestia is certainly an upgrade! He is tall, a good marker and a good tackler, while his positioning is very good too. He has plenty of top-flight experience with Bologna in Serie A and this will be important for us this season as Prestia comes in to try improve our defensive record.

Arvind
5 years
van den Boomen looks a great player, should be important for you this season I reckon.
1
Login to Quote

pompeyblue
5 years
van den Boomen is an excellent signing, and will surely play a signficant role in, hopefully a succesful season for Whitehawk. Congrats on 400 replies, too!
1
Login to Quote

Justice
5 years
Arvind K, Walter & pompeyblue, thanks guys! Yes, van den Boomen is a quality signing for me and I'm excited to have him in my squad. As for Clough, I'm hoping for a good season from him this term 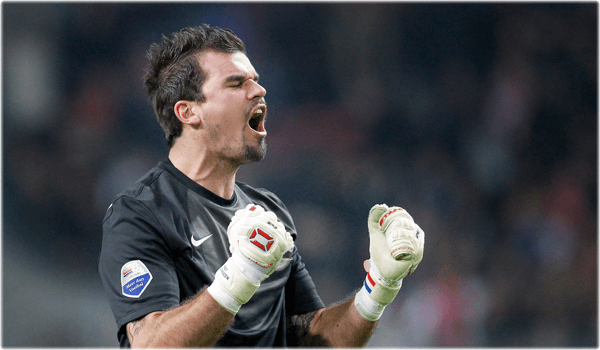 Prince William, manager of Barclays Premier League side Whitehawk, has today named Dutch goalkeeper Piet Velthuizen as the club's new captain, in the wake of club hero Danny Mills leaving the club on a free transfer. The thirty-four year old shot stopper played twenty-six games for Whitehawk last season since joining on a free transfer after a fourteen year spell at Vitesse of Holland. Prince William spoke of Velthuizen's determination and influence in the dressing room as he unveiled his new skipper.

Prince William: "Piet (Velthuizen) is a fantastic footballer and an even better person. He is highly motivated, very professional, very charismatic, and a fantastic leader. He will be the captain of this team for at least the next season and we will review the situation come June of next year. He is perfectly fluent in English and he is a very popular and influential character in the dressing room. Everybody loves him and he is a leader of men. Hid determination is fantastic and he never stops working to improve his game or to help others. What more could you ask for!"

Piet Velthuizen was understandably delighted with his new role at the club and praised his manager for granting him the opportunity. For Piet now, it is all about getting his team mates, and himself, prepared for the upcoming season.

Piet Velthuizen: "It is a great moment for me and I am very thankful of William for giving me this chance to be captain of Whitehawk. I have had many talks with him and we both know of what kind of future I have here at this club. I know that I will to work hard to impress the manager enough for me to start because Elliot (Parish) is a very talented goalkeeper who wants to start too. It is now my position to lead the team out but it is also important for me to keep playing well so I can lead the team.

There have been a lot of transfers here this summer and we have a lot of new players. They are all great people but they will need time to settle in here. Whitehawk is a very unique club and a special one so this should not be a problem. We want to do even better this season and we need to be prepared for the opening match. My dream is to play in a cup final with Whitehawk and hopefully we can make this happen this season."

pompeyblue
5 years
He's got a big job replacing Mills, to become the next captain, that's for sure. Nevertheless, hopefully he shows similiar character and passion, and can help lead Whitehawk to new success.
1
Login to Quote