Justice
6 years
pompeyblue, yeah I'm hoping for him to have a big impact this season

Cappy13, thanks!
Login to Quote 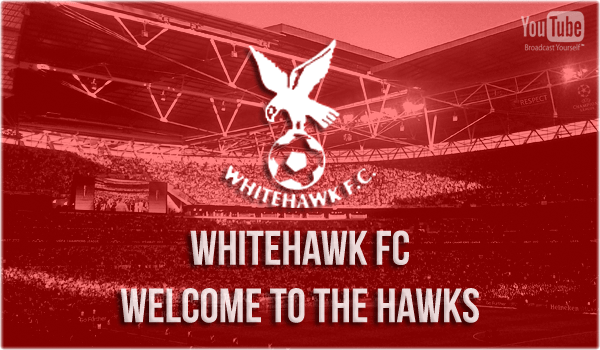 Whitehawk may have brought in a lot of senior players during the course of this transfer window but they have also prepared for the future too, bringing in three very highly rated prospects. Daniel Traoré (£145k) from African Sports is tipped to be one of Africa's rising talents, while Fabio Holden (£1.7M) from Stevenage could turn in to a future England striker. Albert Wetzel's £14M move from Feyenoord holds Whitehawk's current record transfer fee and is expected to become a top player when he is older. 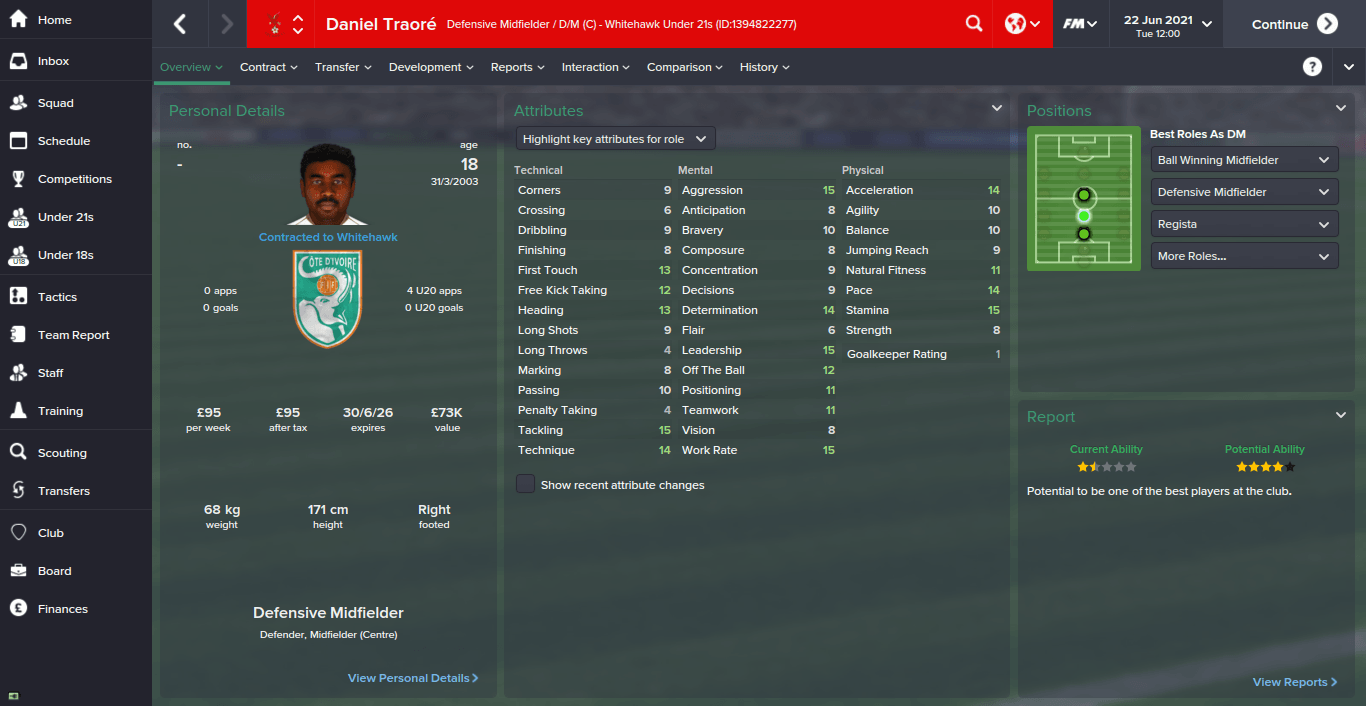 Daniel Traoré joins us from Ivory Coast side Africa Sports. The defensive midfielder has a bright future ahead of him and could become one of his continent's leading stars in a few years time. He has great physical attributes and is a hard worker and good tackler. Unfortunately he does not yet have a work permit so I will be loaning him out to another European country until he can get one. APOEL are interested in taking this guy on loan, which is good for us. I am confident that after a year of regular football for a professional team, work permits will not be a problem for us. 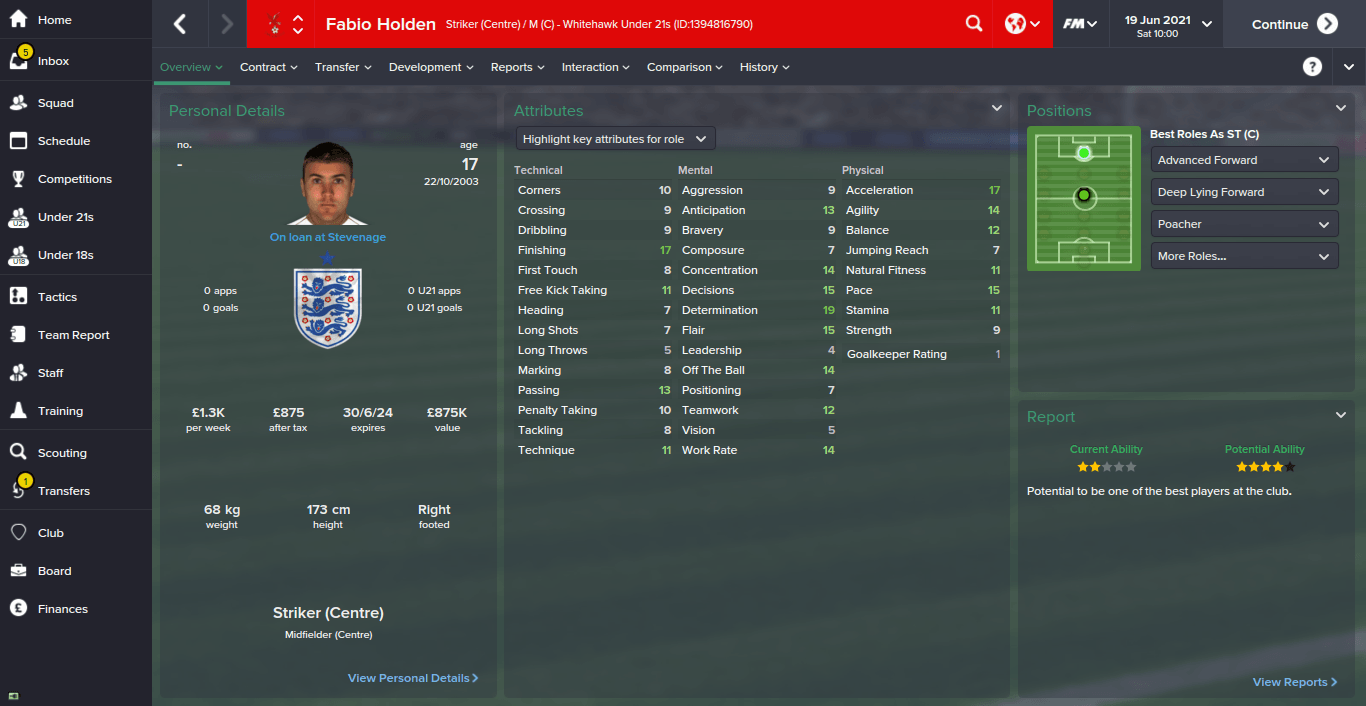 Fabio Holden is one of the future stars of English football. Still only 17, he made 24 league appearances for Stevenage last season in Sky Bet League 1. We signed him on a fee + loan back deal, which favoured both sides well. There were many big clubs in for Holden including Manchester City, Arsenal, Liverpool and Tottenham but we did very well to get him first. He has a very high amount of pace and is a good finisher. With plenty of training, this guy could become a monster in front of goal. 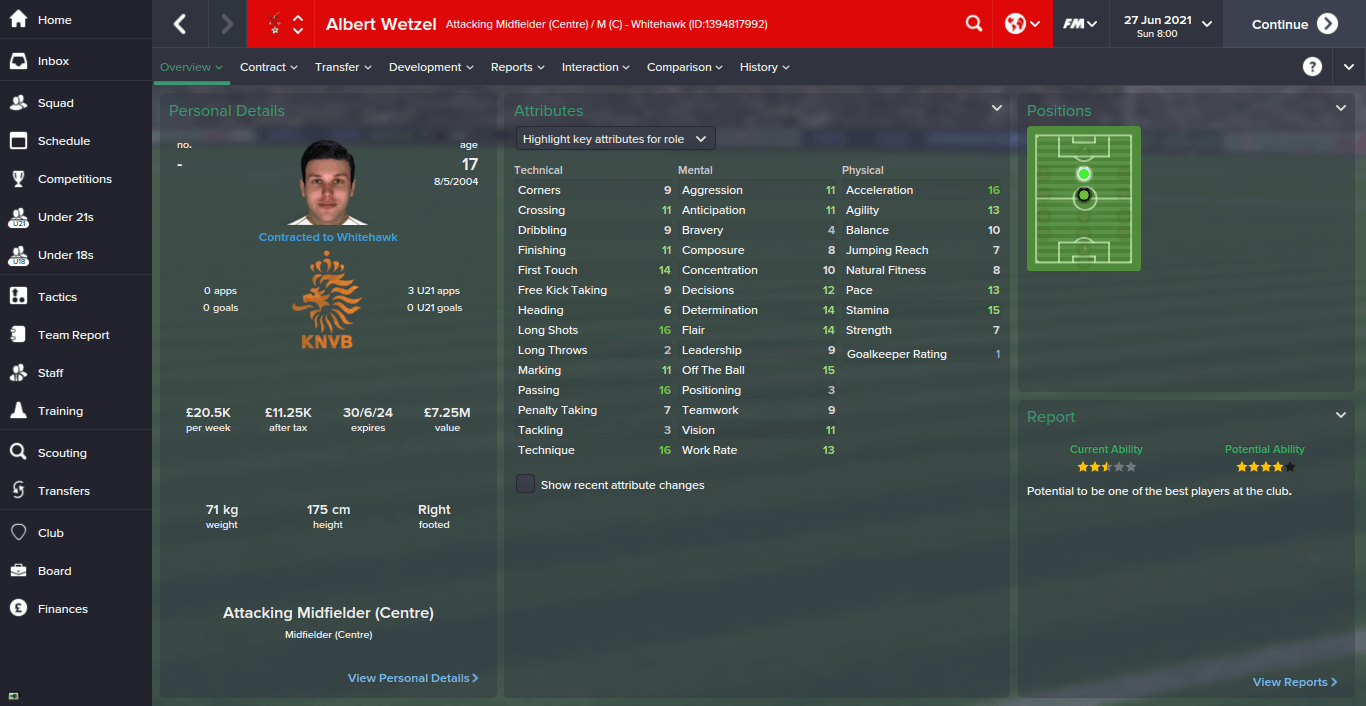 This guy broke our transfer record fee for a reason. At the age of seventeen, this guy is already a talent. He already has some amazing attributes such as his passing and long shots and he has the potential to become one of the best players in the world, of nurtured correctly. I paid a lot of money for him but I reckon I can make it worth it in the end. He will need a lot of taking care of but with the amount of experience that we have around him, he will certainly be given a helping hand or two. This guy will shine!

Walter
6 years
The regens are here!

I think Traore deserves a bit more than 3* for Value for Money, 145k is an absolute bargain. Holden looks a good prospect and Wetzel is awesome, looks like you've got the backbone of your side for a few years now!
1
Login to Quote

Justice
6 years
Cappy13, yes he does!

Walter, yes they are! 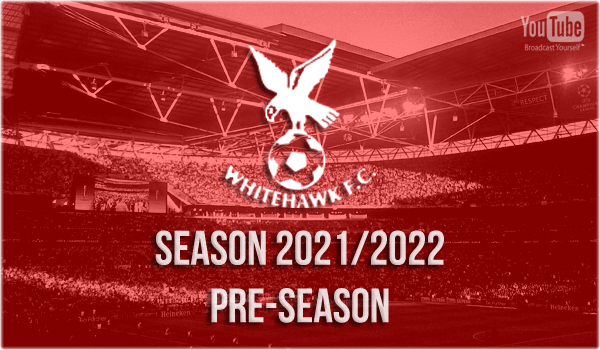 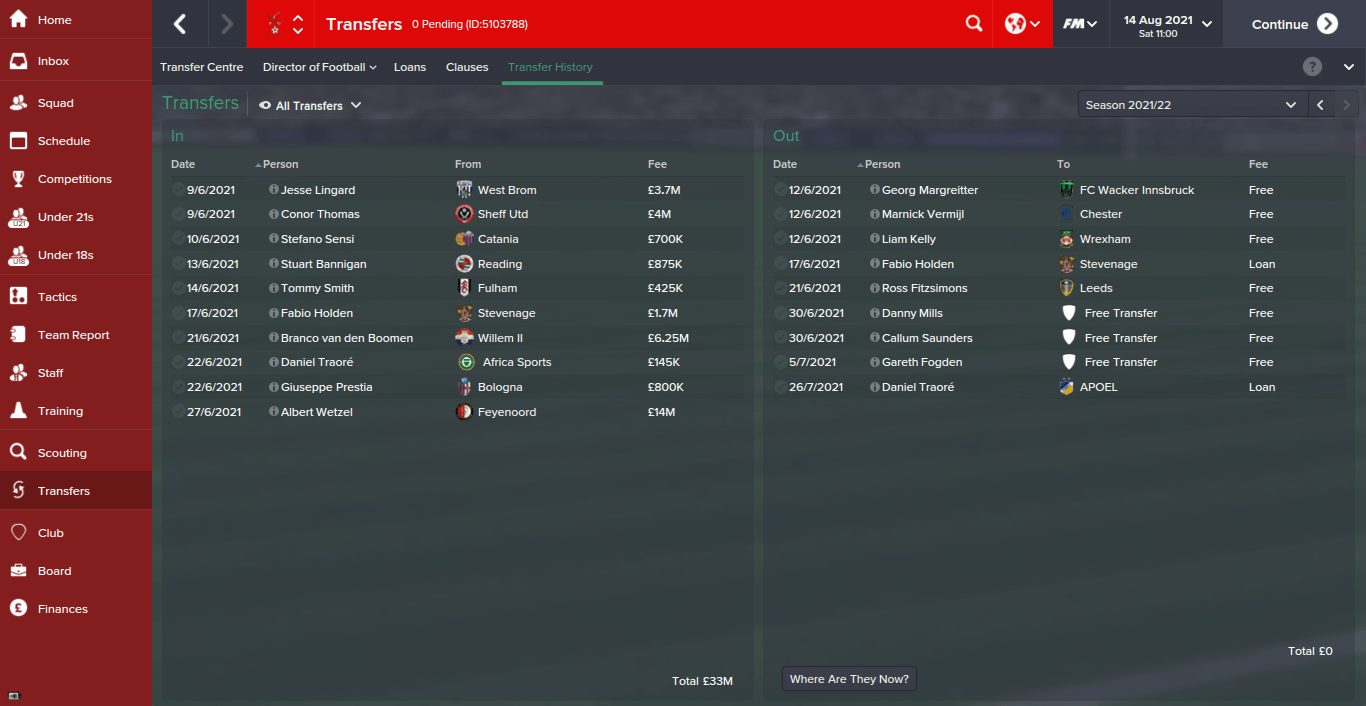 Not many senior players left the club with the most reputable departures being Danny Mills and Marnick Vermijl. None of the players sold/released will be missed all too much, with respect to them. Young prospects Fabio Holden and Daniel Traoré both go out on loan for the season after joining us, in order to gain first team football to give them experience. In terms of signings, we brought in ten players, with eight of them put in to the first team. Our most expensive transfers included Dutch wonderkid Albert Wetzel, fellow compatriot Branco van den Boomen, Conor Thomas and Jesse Lingard. If you want screenshots, flick back through previous updates. We spent a total of £33M, which is a large amount of money but it was needed to give us a bit of depth. We will still need to spend millions-upon-millions more in order to be considered a good Premier League side but we should survive with what we have got now.

We started last season with league matches against Chelsea, Tottenham and Liverpool. We got a bit more luck this time as we kick off against Crystal Palace, Southampton and Watford in the league, while we host Carlisle in the Capital One Cup. We continue on from the end of last season where we were in incredible form and we want to pick up some points this month and progress in the cup. Hopefully we can do well this season.

That should be a relatively easy start to your season, hopefully a few early wins on the board!
1
Login to Quote 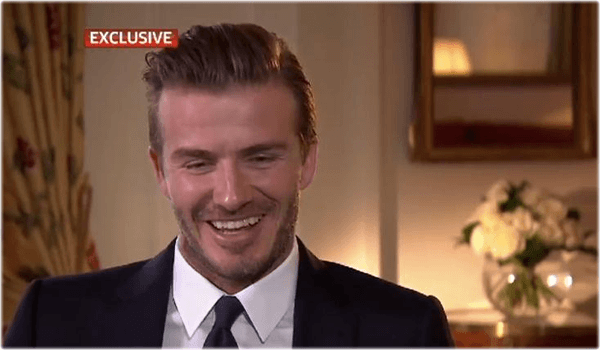 Eighteen years after leaving Manchester United and the Premier League for the Spanish capital giants Real Madrid, David Beckham believes the Premier League is at an all-time high and can only improve with Whitehawk and Prince William in the competition.

David Beckham: "I've never seen the Premier League at such a high quality as it is now. There are so many star players in the league who make each game a fantastic spectacle for all to see. You look at the likes of Adnan Januzaj, Eden Hazard, Kevin Volland, Rik Van Loon, Domenico Berardi, Philippe Coutinho; these are the true stars of the division. Ten years ago, we would have been lucky to see one of them play in England. The Spanish league was the most attractive league back then, but not any more. Every team in the Premier League is of European standard now and that is magnificent for the clubs and the country.

It's the teams like Whitehawk who have impressed me most. The work Prince William has done is incredible, to take them up five divisions in six seasons and then survive very comfortably in the top flight after spending little-to-no money. Their win against Manchester United at the end of the season was a show of what can happen in the Premier League. Anybody can beat anybody and Whitehawk played some dream football in the process. They don't have the best players in the league but they prepare well tactically and mentally and they took the game to United from the off.

I can only envision greater things for Prince William and his team. He's a fantastic coach with brilliant ideas and he has proven time and time again that he can pull the results out of the bag when needed. He's spent a fair bit of money this summer which will certainly strengthen his squad and after a few more seasons, he might even have Whitehawk challenging for the title!"

Lynchy
6 years
I was thinking to myself while reading the other transfers that they were all slightly older but you've brought in some exceptional talents. The Dutch league never lets me down in terms of regens and has done the same for you! Keep it up

Ta31_a
6 years
I was wondering if your going to continue with the story. I hope you do this is a really good one
Login to Quote 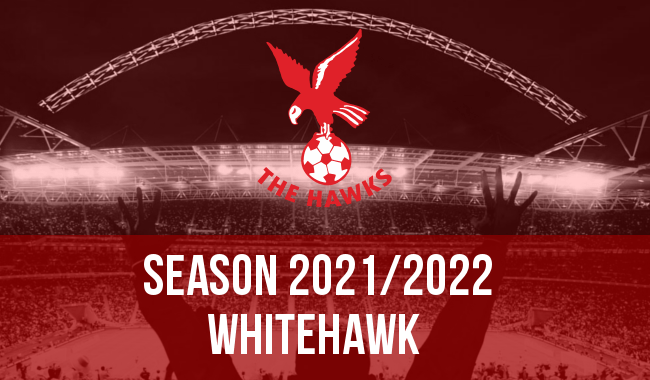 *NOTE* I am considerably far ahead of this stage in-save so I cannot provide screenshots of the players. 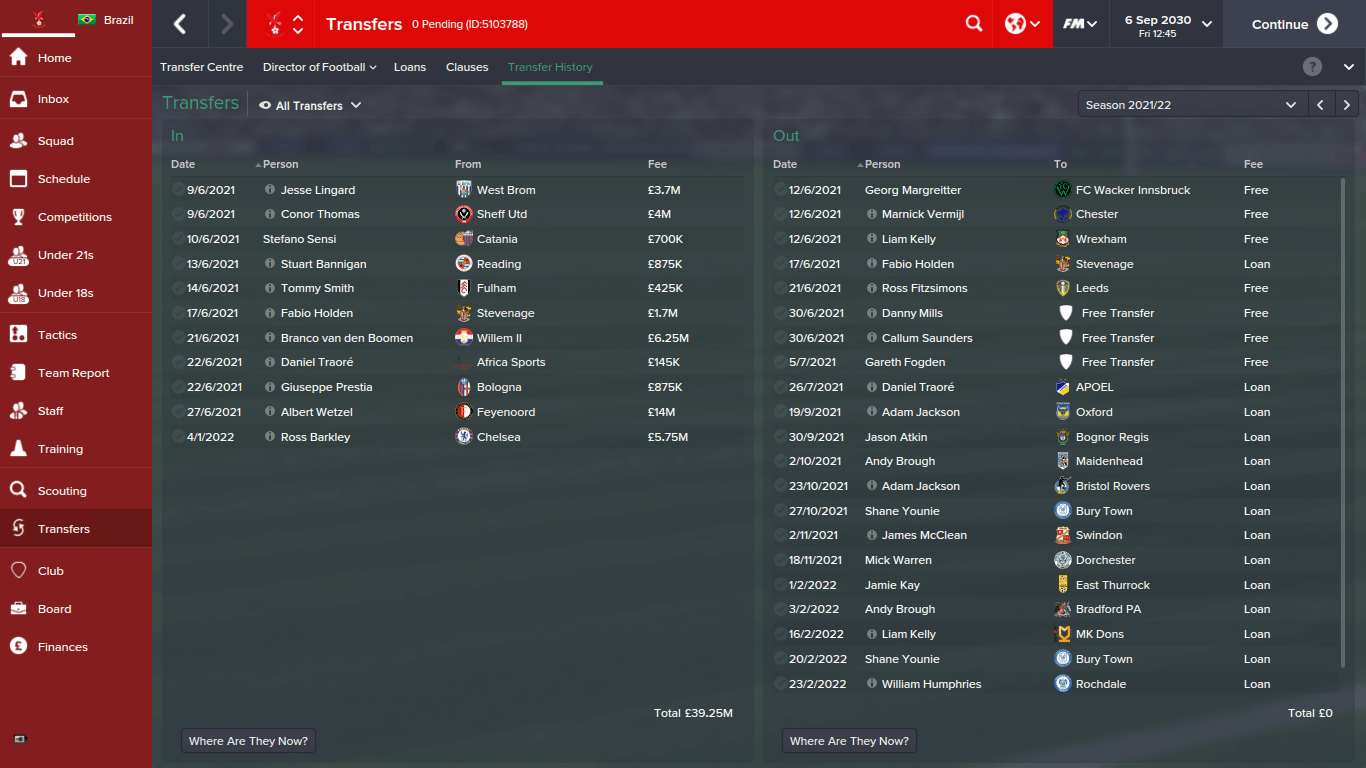 Following Whitehawk's first ever season in England's top flight, money was splashed in order to build on the previous season's success. In total, the club spent just under £40M to strengthen the side and key arrivals included Jesse Lingard from West Brom (£3.7M), Albert Wetzel, aged 17, from Feyenoord (£14M), and Ross Barkley from Chelsea in January (£5.75M). Lingard and Barkley would certainly be stars of the near future, while Wetzel.... well, I won't spoil it for you guys! Club heroes left in the form of Danny Mills and Ross Fitzsimons, while a number of players left on loan, including new-arrival Daniel Traoré who failed to earn himself a work permit. 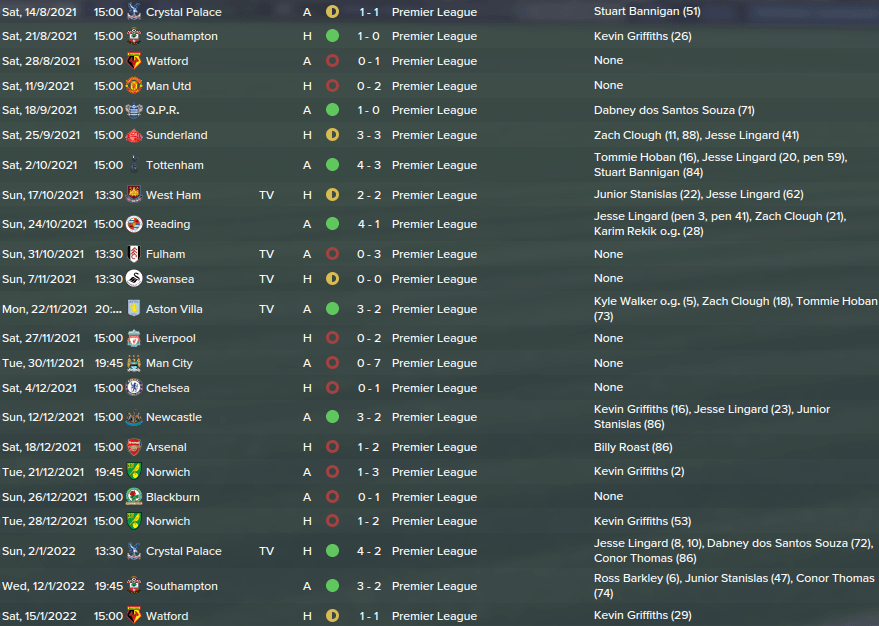 Despite our big summer spend, our squad still looked considerably weaker than others in the league, and that showed as we suffered a large amount of defeats. However, we did manage to patch together a couple of good spells during September/October and February. Notable victories came against Spurs (twice) and at home to Newcastle and Blackburn in our last few fixtures of the season. Big defeats against Manchester City and Chelsea proved that we don't yet have the quality in our team to fend off big guns. 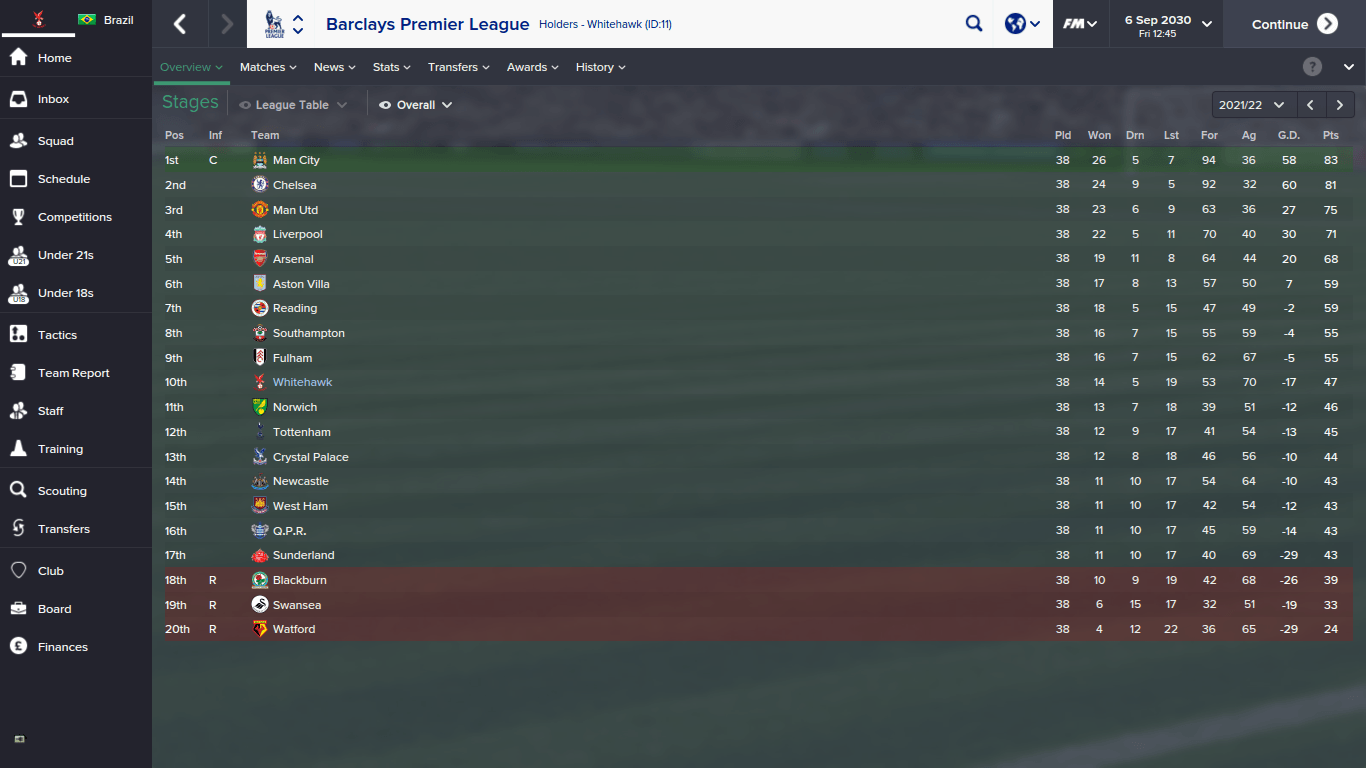 Our mid-season form was good enough to keep us far away from relegation danger as we finished in a very respectable 10th place, one place up from last season. We finished eight points away from the relegation zone and another Premier League season awaits us. With each passing season, our finances continue to flourish and we can invest even more in to our squad. 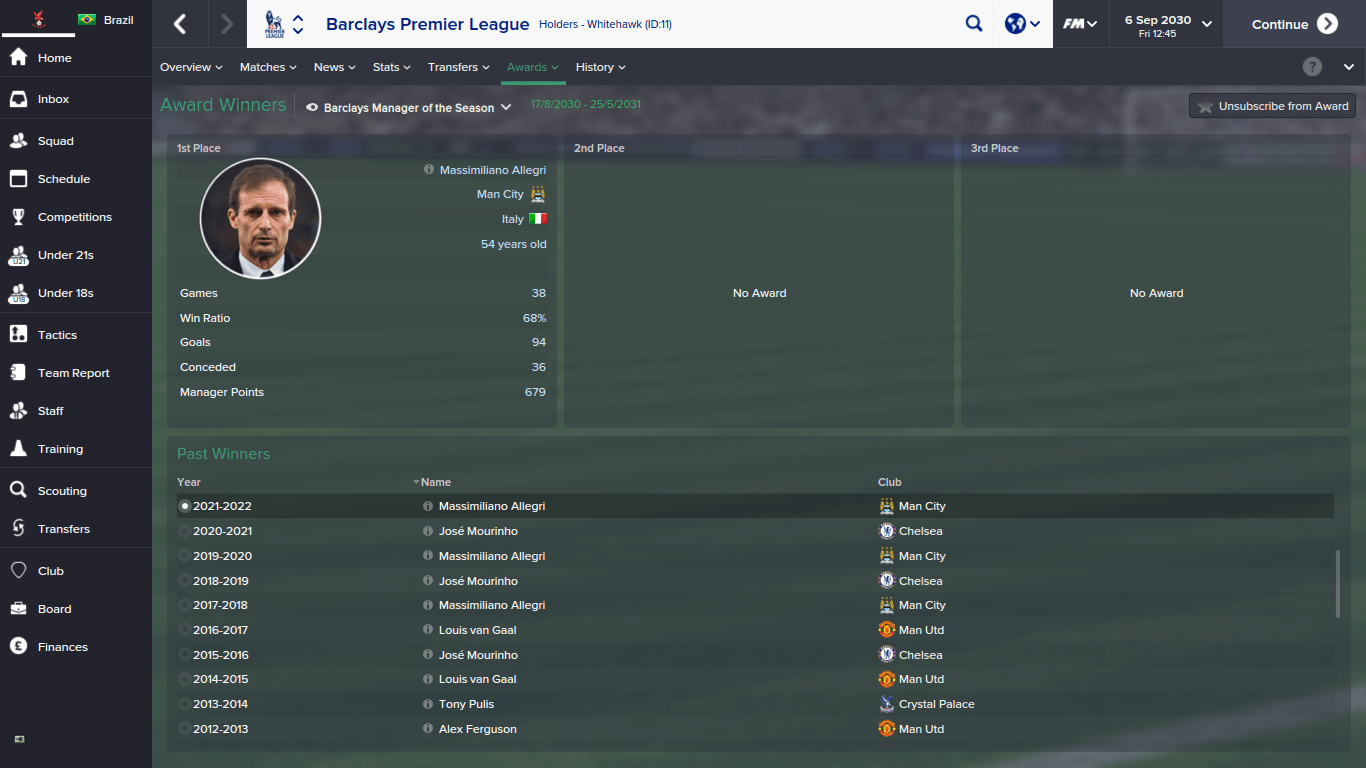 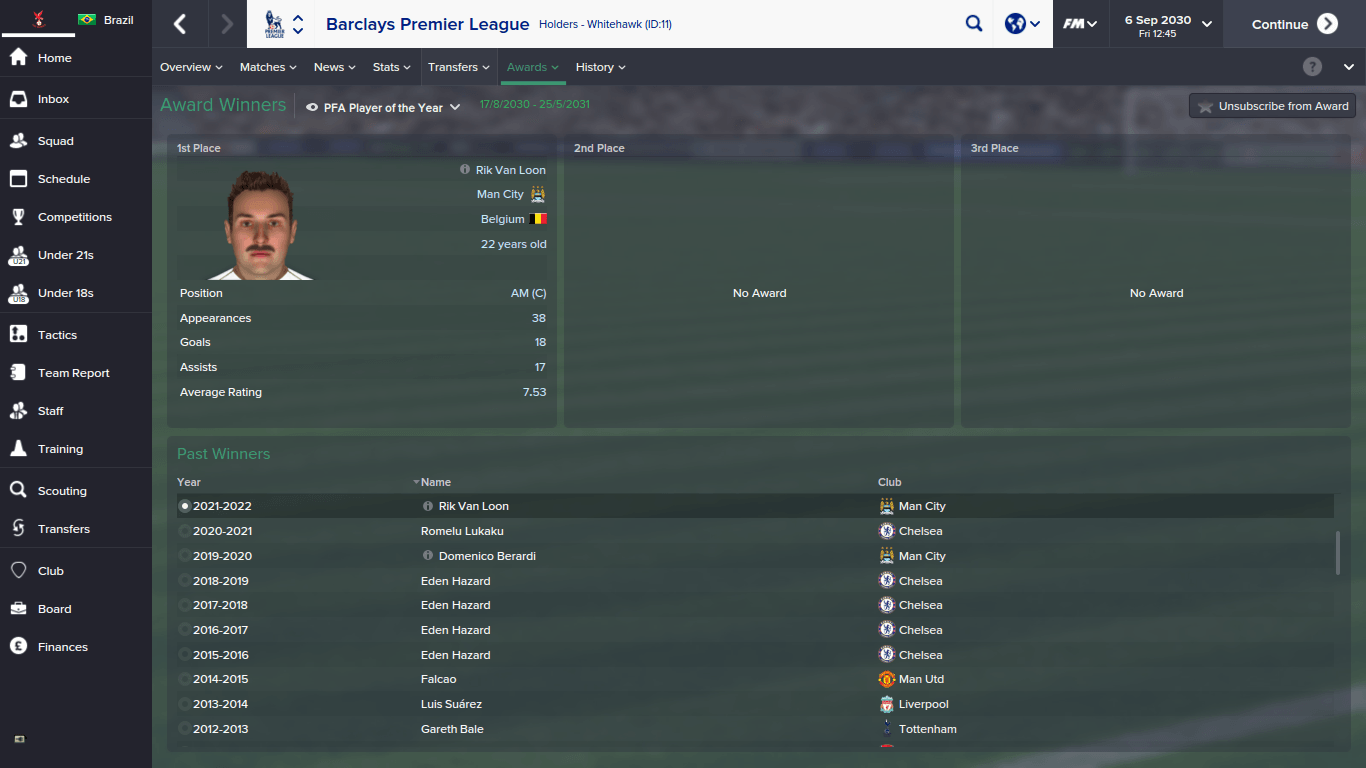 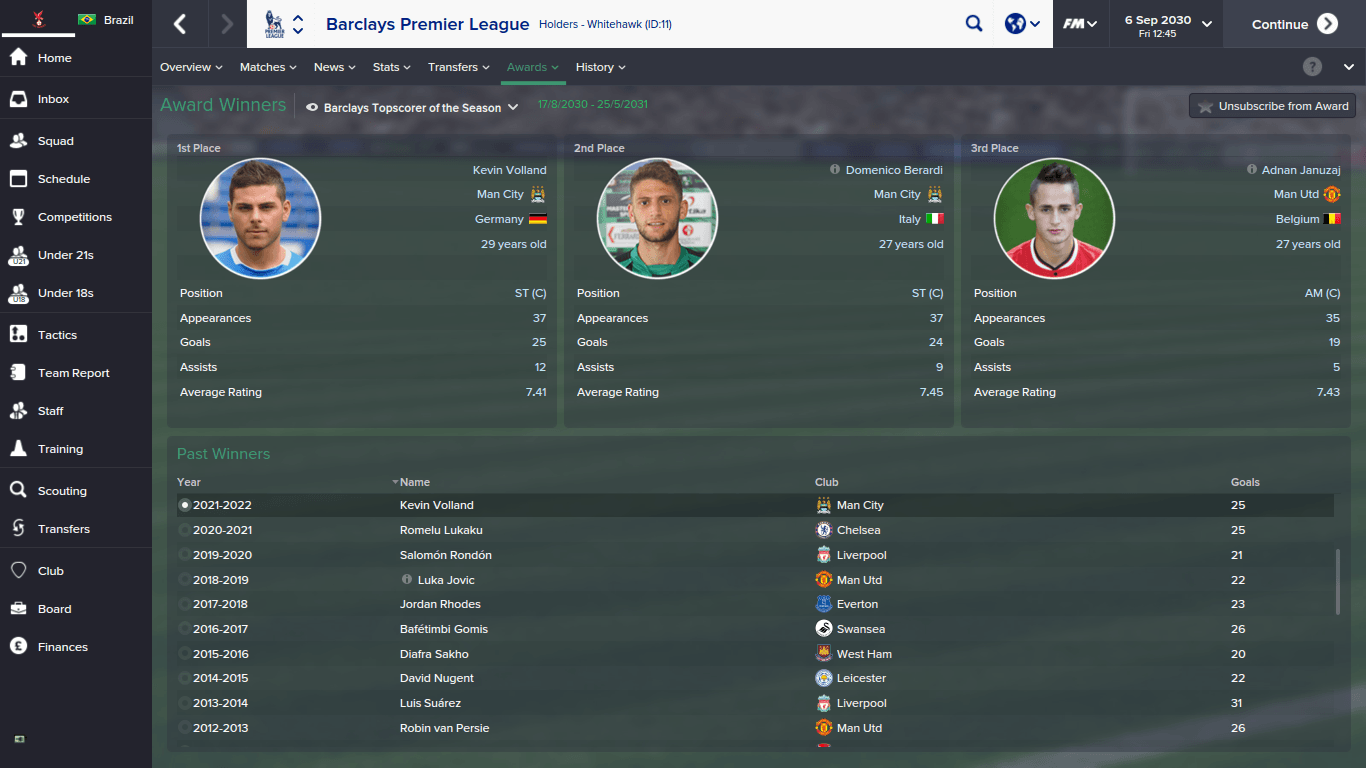 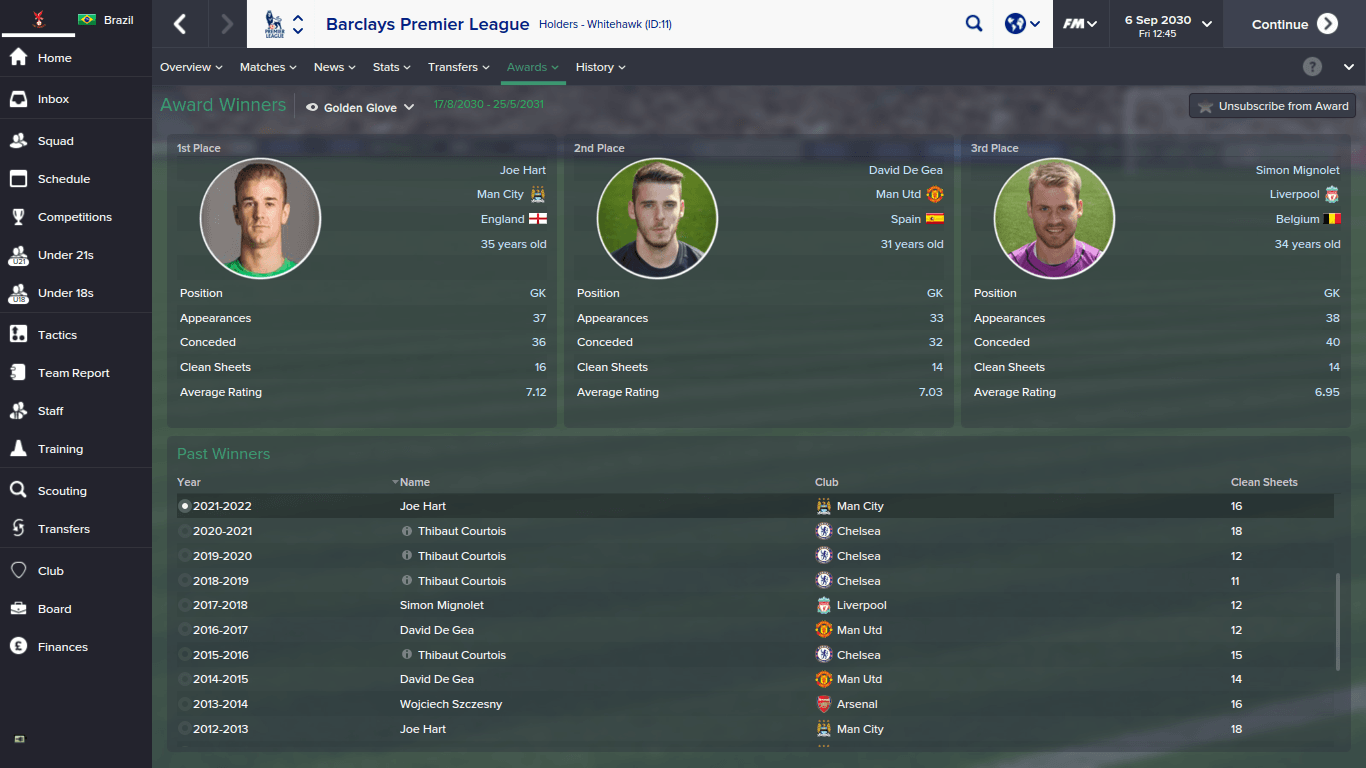 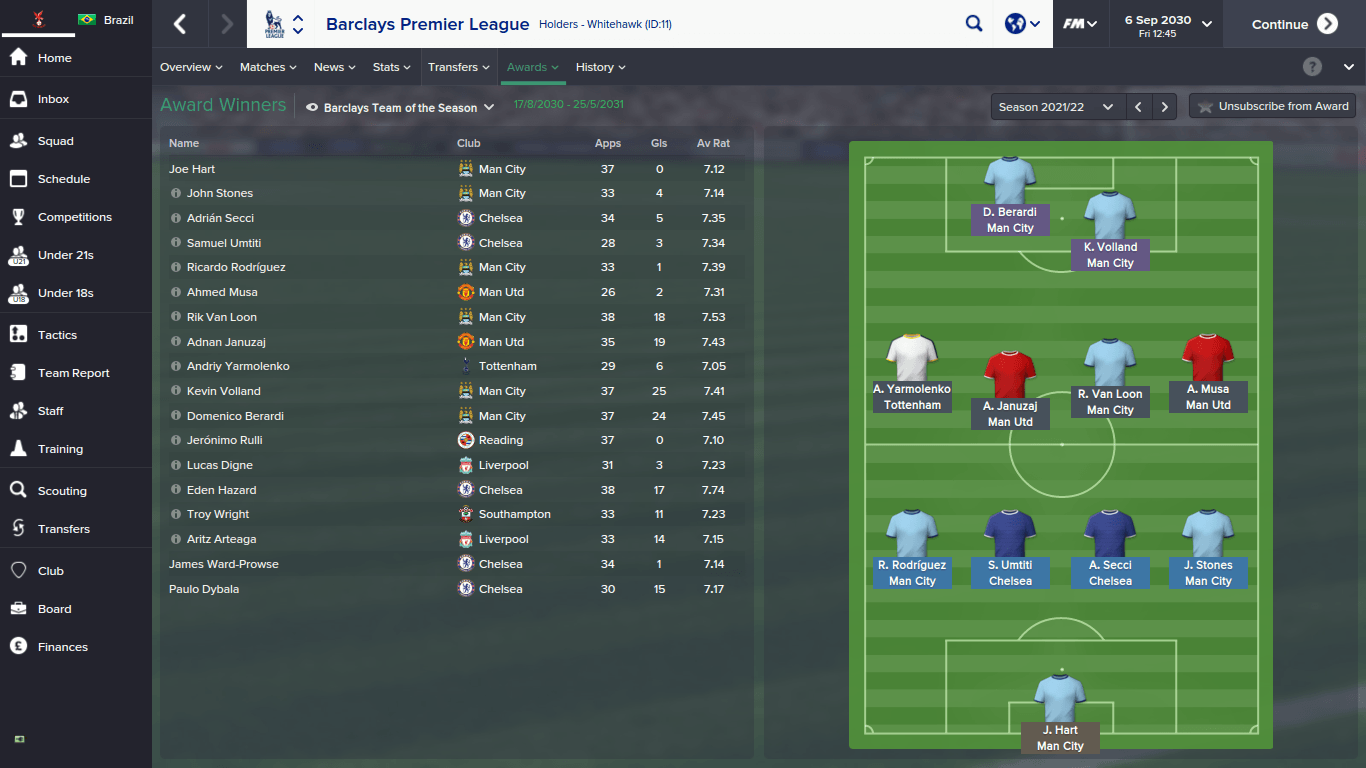 Convincing victories over Millwall and Bournemouth saw us reach the fifth round but Reading proved to be too strong for us. 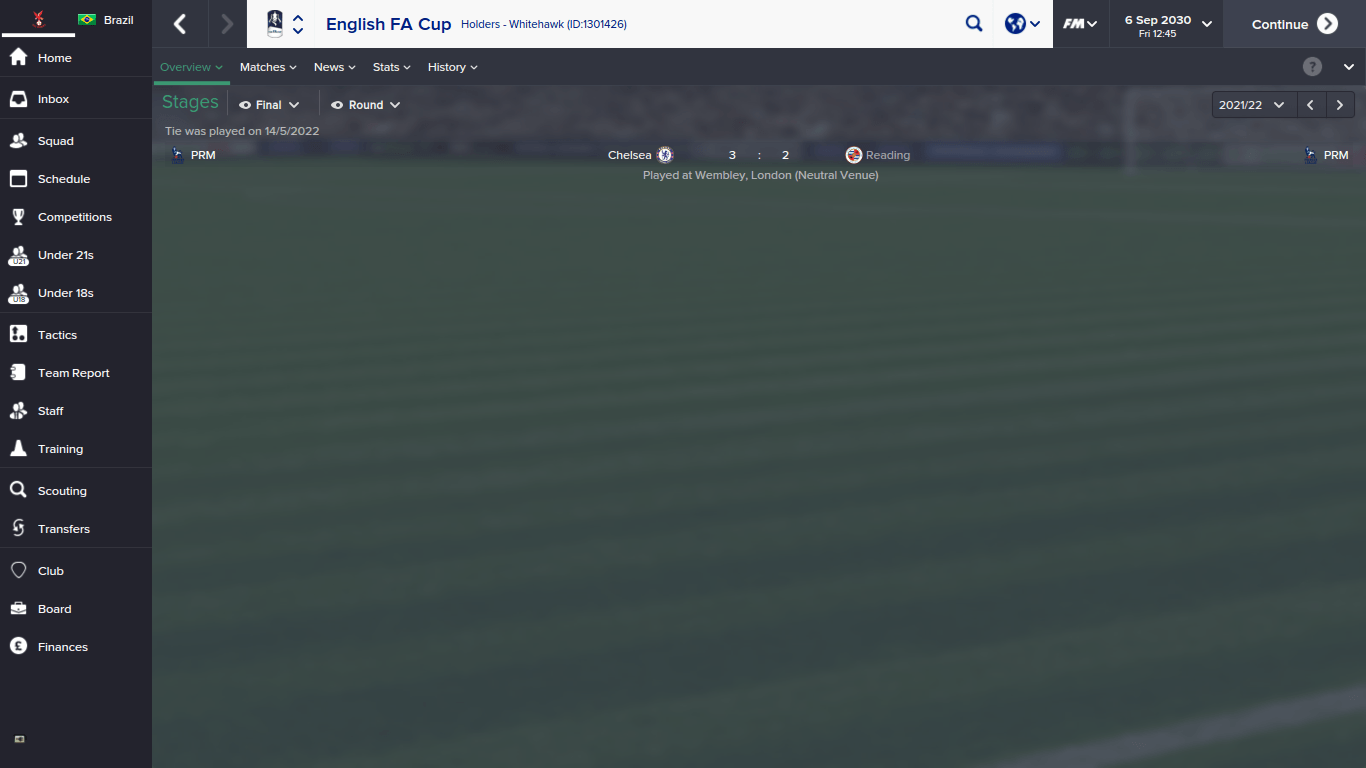 We powered our way past Carlisle and Sunderland but Chelsea had too much in their locker for us to overcome as we were put in our place with ease. Nothing much happened here. Goalkeeper Piet Velthuizen took the captaincy while we continued to improve our facilities. There will be more improvements made over the coming seasons. The 2022 World Cup saw France lift the trophy after beating Brazil in the final. Note that I was NOT manager of Brazil at the time, I am currently the manager of Brazil which is why they show up in light blue. In other news, Chelsea and Bayern Munich won the UEFA Champions League and UEFA Europa League respectively, while Cristiano Ronaldo claimed the FIFA Ballon d'Or award. 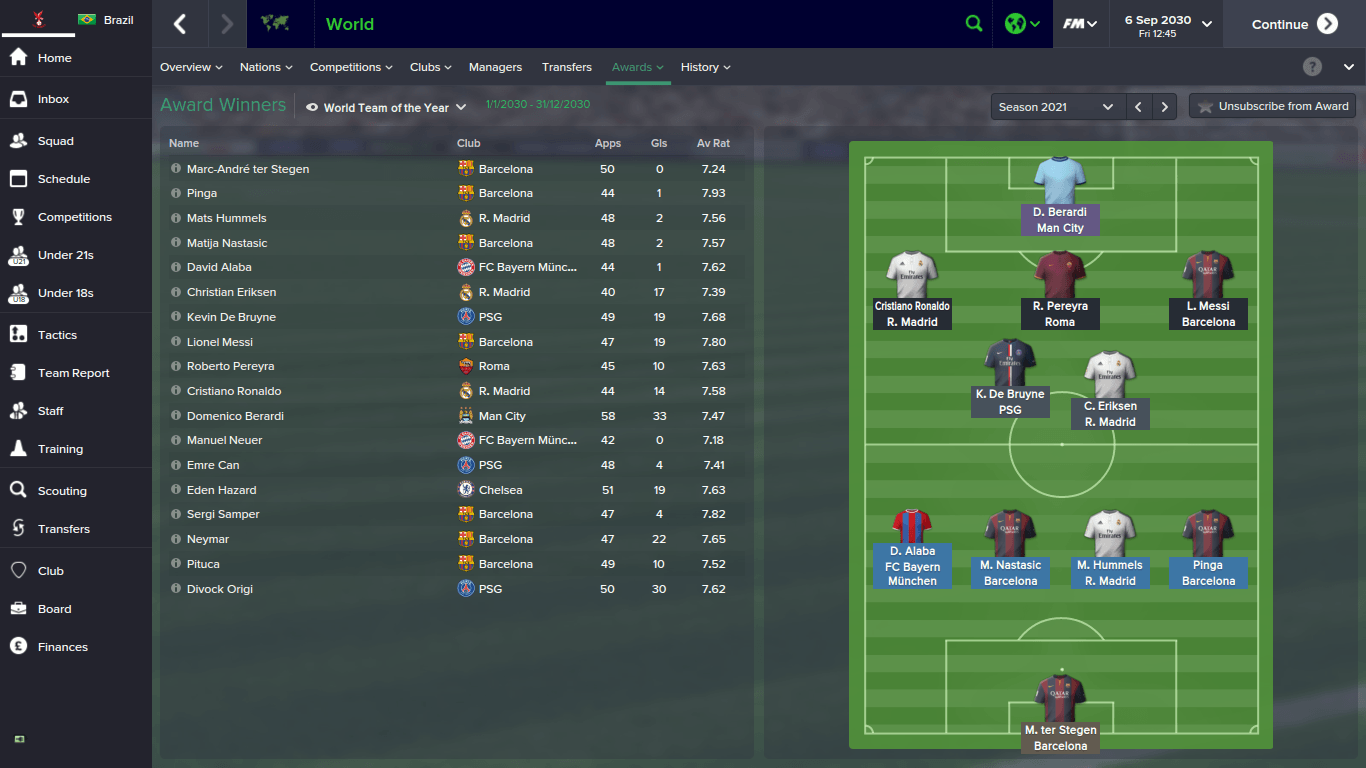 Tallery
5 years
Mid table is a pretty good place to be rn, here's to next seasons improvement!
1
Login to Quote