pompeyblue
7 years
P-KIDDY: Yup, he's a pretty good signing, and someone with some potential too!

Neal: Hush, and trust my judgement.

No1VillaFan: Good to hear someone knows my signings, cheers.

TaroMisaki
7 years
Amazing Story so far, really love it!
And what a first Season, keep that up!
Login to Quote

The 510 Series
7 years
Wow! Hard to believe that I haven't been following this story until now! Great job, and good luck in the Vanarama Premier! Look out for Luton though; they're quite good.

pompeyblue
7 years
TaroMisaki: Thanks a lot man, the first season was definitely a big success, and hopefully we can continue to bring success to the Havant fans!

The 510 Series: Cheers man, and yeah, Luton are alright

Probably because I'm being held hostage

Wrapped up the title quite comprehensively pompey, and the takeover + new deals for other players is a big plus, can't wait to see how you fare in season two!
Login to Quote

Jonaldinho
7 years
Interesting news with the takeover and some nice signings there.
Login to Quote

pompeyblue
7 years
Walter: Thanks Walt, but who's keeping you hostage?

TaroMisaki
7 years
I know how to put in a link in a post, but can you tell me how i find the link to all my posts, as i want to do an index in my story, just like you do!
Would be much appreciated

pompeyblue
7 years
TaroMisaki: At the end of each post, it says 'Permalink' and you can copy this shortcut, for the link to the individual post. For future reference though, please ask in GC or in the discussion page, as this isn't really the place for this question. Hope this helps 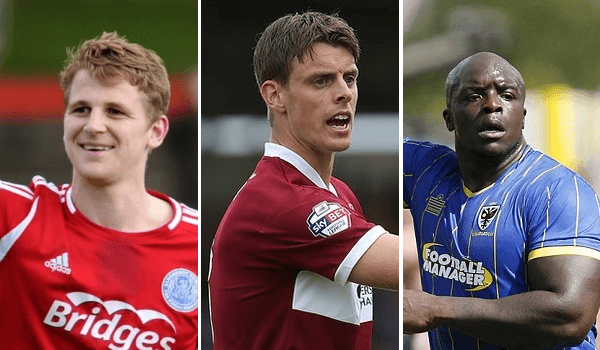 The acquisitions come a week after Havant wrapped up the signings of Mikhael Jaimez-Ruiz, Therry Racon and Daniel Pappoe, meaning that there have now been 6 incomings at West Leigh Park, so far this summer. The feel good factor is certainly still present after last season’s league triumph, with a new owner and the upcoming new league season, adding to the buzz around the club around the club.

The fans will surely be pleased with the next three names who have pledged their future to Havant & W, with all three players having played at a higher level. Joe Oastler was the first player through the door, the 25 year old defender having left Aldershot following the end of his contract. He began his career at Portsmouth, going on to play for QPR, Salisbury and Torquay, being also able to operate as a central defender. The Englishman is certainly not a remarkable player, solid more than anything, but should provide good competition in the full back position.

Next up is Ian Morris, the 28 year old Irish midfielder, who departed Northampton Town at the end of the season. Another versatile performer, Morris can play all across the midfield if required, however he is most comfortable in a central area or on the left. Having played professionally for all his career, with clubs such as Blackpool, it may come as a surprise for him to have dropped down to the Vanarama Conference Premier. He is a very accomplished player, adding to a strong midfield that The Hawks currently have at their disposal.

Finally, a player who is widely recongnised across football fans due to the football video game FIFA, Adebayo Akinfenwa has gone ahead with joining Havant & Waterlooville. ‘Bayo’ is officially rated as the strongest player in the world, on the game, and for that matter many people are familiar with the 33 year old striker. He does have a good record in the lower leagues, to be fair to him, and after being told he was too big to play football professionally, this is something he is rightly proud of. He found his most success at Northampton, becoming something of an icon there, and recently left AFC Wimbledon after a lack of game time.

Manager Lee Bradbury was ‘over the moon’ with his latest set of additions, and hopes these players will play their part in taking the club to the next level.

He said, ”I’m over the moon that these lads have decided to come and play their football at West Leigh Park, and I hope they will contribute significantly, in taking us to the next level. Joe is a very reliable player, I know what I am going to get with him, and he will give us a lot of security at the back. Ian is another reliable player in midfield, very consistent, but has really good ability to having played in the Football League for his entire career. We were really strong in attack last year, and Bayo is a signing who adds even more to that department, which is great.”

Verdinho
7 years
Sorry, all I saw was Akinfenwa. Bags of lower league experience at 33
Login to Quote

No1VillaFan
7 years
Your signings are awesome you are going to do sooo well this season keep it up dude!
Login to Quote

pompeyblue
7 years
P-KIDDY: Indeed, that experience will be very useful!

Icarus: Yep, Akinfenwa, the beast himself! Thanks for the comment 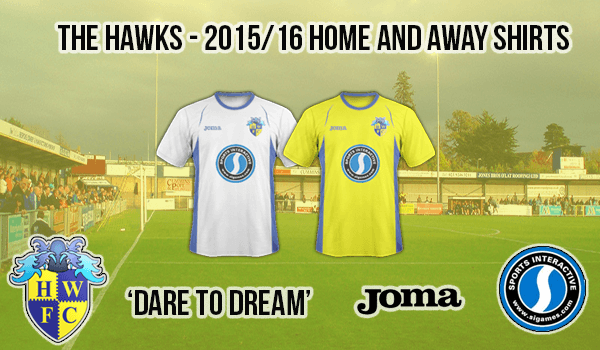 Havant & W have officially released their new home and away kit’s for the 2015/16 season, in the Vanarama Conference Premier.

The two strips have again been produced by ‘Joma’, kit manufacturers of the club for the past 4 seasons. The current deal, with the Spanish based company expires at the end of the year, however, the existing agreement is financially beneficial to The Hawks with the shirt’s cheap to produce and very sellable to the local area.

There is however, a new shirt sponsor, in the form of Sports Interactive. The creative games studio is behind the popular football management simulation series, Football Manager and have signed a two year deal with the club to feature on the front of any new kit.

Home Kit: Havant’s home kit this season is keeping to the traditional white theme, with blue used as the secondary colour. The top features a very basic collar, in blue, and a design which features two blue strips either side of the shirt. The Sports Interactive logo, meanwhile, is printed in the middle of the kit.

Away Kit: Havant’s away kit this season is a carbon copy in style, to the home shirt, but the colour theme is slightly altered. Instead of white as the base colour, this has been replaced with yellow although blue is again used to compliment this, as the secondary colour. Again, the Sports Interactive logo is situated centrally, on the shirt.

As the promotional poster displays, the club is using the line ‘Dare To Dream’ with the aim of advertising and endorsing the new kit’s, which are now available in the club store just outside West Leigh Park. Get yours today, and ‘Dare To Dream’!