Jamesg237
8 years
It is always going to be a risk relying on youngsters, "You cannae win anything with kids!"
1
Login to Quote

Ziechael
8 years
Great updates mate, your stories go from strength to strength, can't wait for the next developments!
1
Login to Quote

InvertedWingbacks
8 years
good series of updates there man! be interesting to see what happens with the potential takeover! you've got some great talents at the club though; hopefully they continue to develop for you!
Login to Quote

Justice
8 years
It would be interesting to see what happens if Lerner sells. Will the new chairman invest money or take away all your power?
Login to Quote

Feliks
8 years
Could be a good move, more money, but could also mean a giant pain in the arse
Login to Quote

Justice I hope so because I have done a good job

Great Month Again For The Villans


When you looked at Palace, Burnley, Leicester and Southampton you think there would be 3 wins there and probably a defeat to Southampton but Aston Villa, on the back of a Manager, Player and Young Player of the month award last month were coming into the month buoyed with confidence.

It was a shock player who decided to shine this month! Charles N'Zogbia has had a torrid time since moving from Wigan for £9,500,000 but this month he scored three as Villa helped themselves to 7 points out of 12. 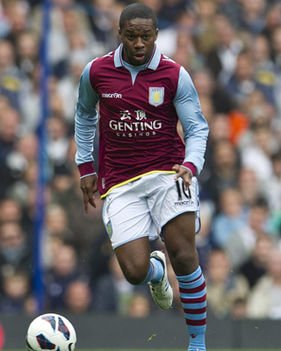 Crystal Palace though faced an onslaught from a hungry, vibrant Aston Villa side but they held out of shot after shot until in the 85th minute N'Zogbia picked the ball up and thrashed home a scorching 20 yard fizzler to hand Villa a deserved victory. McGrath was full of praise for his young side, We were fantastic today and the goal was deserved. Charles has faced a barrage of abuse from Villa fans but now he has turned the corner and they were chanting his name at the end of the match!

Villa then travelled to Turf Moor and embarrassed Burnley 4-0! A Tom Heaton own goal set Villa off in style from good work by Jordan Graham who was also provider for the second goal. He worked hard on the left all half and when he fizzed in a low cross to the near post, Andi Weimann got there first and toe poked it home. It was a great goal but the second half was all Burnley.

The problem they had was they have no end product and only hit 2 shots all match so when Charles N'Zogbia took over in the 80th minute the writing was on the wall. The first of his brace was from a unusual headed goal and then he thundered home a 25 yard free kick to give Villa a 4-0 win. 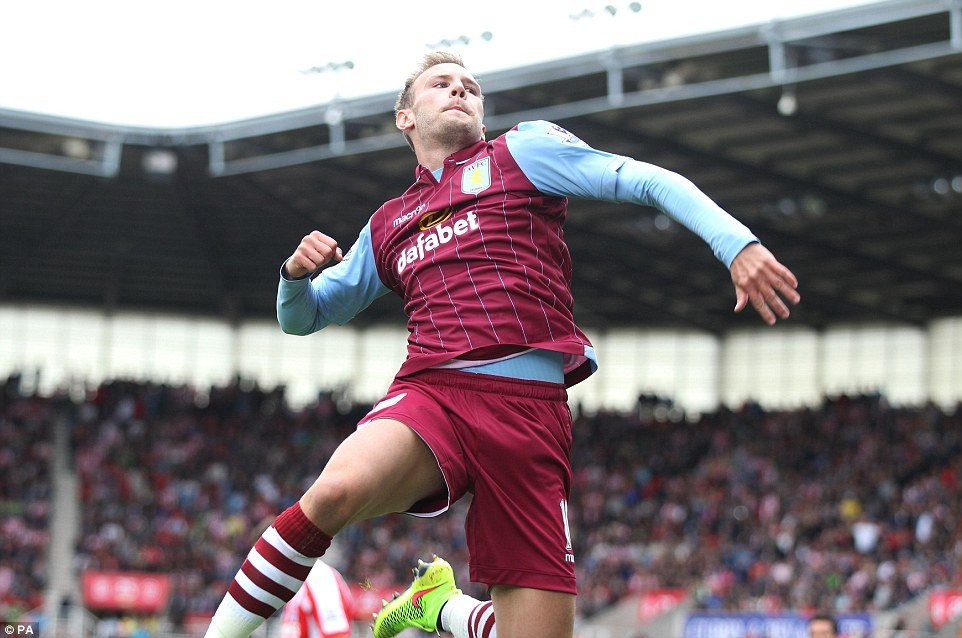 Andi Weimann has also been scoring this season

Then it was a midlands derby with Leicester. The game started really brightly with both sides testing each other. Ulloa was first to test Guzan with a fizzing low drive and that was followed up with Cleverly hitting just over the bar.

In the 14th minute Ron Vlaar made it 1-0 from a corner and a unstoppable header. Villa started to dominate and Agbonlahor, N'Zogbia and Weimann all went close but half time was amazingly only 1-0. In the second half, the match continued at 150mph and Knockeart and Ulloa went close again but in the 77th minute Jamie Vardy found himself through on goal after a Okore mistake and Vardy made no mistake at all in making it 1-1.

This match was a joy to watch and the draw was warrented.

Villa then played Southampton and Agbonlahor got them on the way but it was going to be short lived as Wanyama, Pelle and Schneiderlain made sure that Villa's good form would end here. 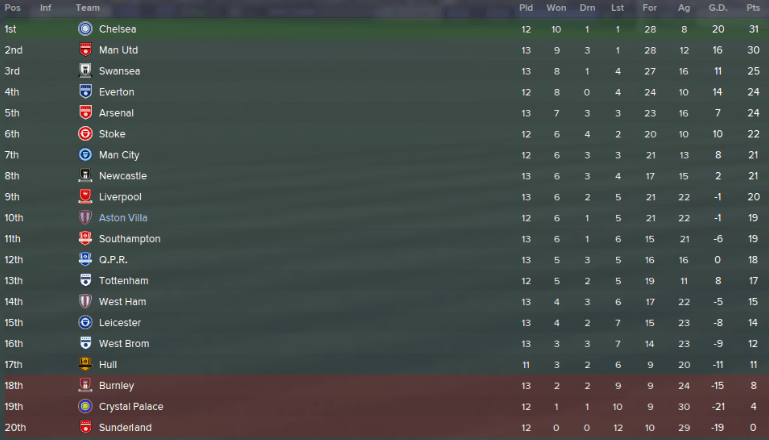 So Villa improve into 10th place with a game in hand and Swansea make the biggest step up the table this month but lets all feel sorry for Sunderland, TWELVE games played and TWELVE games lost. A -19 goal difference and surely they are going to be relegated this season because they really are rubbish.

Tottenham have got rid of the manager and one of the favourites for the job is Paul Lambert and Mark Hughes. 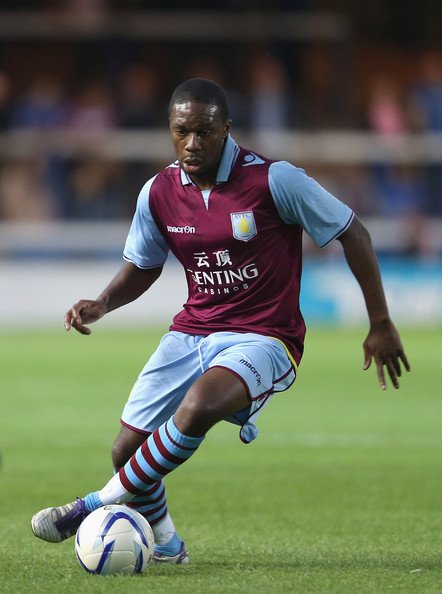 Charles N'Zogbia has been outstanding this month scoring 3 goals and creating 2 just to back it up. N'Zogbia is now finding his feet and can not wait to see him this month!
Login to Quote

Jamesg237
8 years
The result against Leicester has to be a disappointing one? Poor Sunderland...poor poor Sunderland! Quality update as usual; keep it up!
1
Login to Quote

Jack
8 years
It's a shame you couldn't pick up 3 points against Leicester, but you can't win 'em all

Red Devil
8 years
however, you still have one game credit, so you can get some shift in the rankings.
Overall a solid season.. and yet still wondering about the youngsters

Feliks
8 years
Decent month, but a realistic position of 10th at the moment
1
Login to Quote

Grealish: I Love This Club! That Is Why I Have Signed New Contract 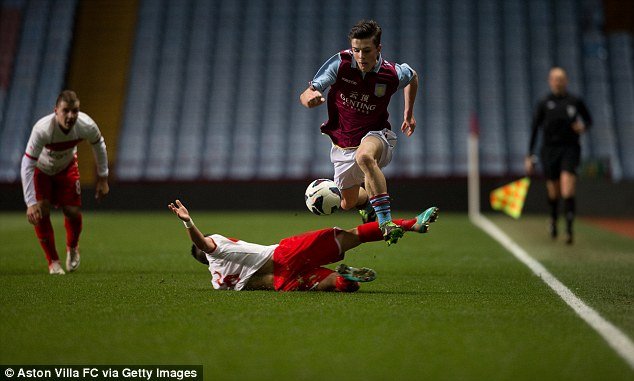 At the beginning of the season the only real people that had heard of Jack Grealish were the whole Villa community and the scouts of the top clubs in England but now he is fast becoming the hottest property in the Premier League.

He signed a new contract this season already but in the light of his form and the potential to be picked off he has now committed himself to Villa Park in signing a brand new four year deal worth £14,250 a week and Aston Villa have been sneaky is putting a minimum fee release clause of £42,500,000 in the hope that it will put clubs off going for him.

Grealish has enjoyed a long run in the first team this season and has arguably been the best player in a Villa shirt with 12 appearances, 3 goals and 11 assists you can see why Paul McGrath will not dropped the fledgling youngster.

Aston Villa are in my blood and now I have my club career sorted for the next four years I now need to work out who I should declare my allegiance to as far as international goes. I am going to take my time to work it out but I can not wait to play the next game for Aston Villa.
Login to Quote

Ziechael
8 years
A great place to be at this stage in the season.

Still settling into the job and the players adapting to your playing style, new players coming in and yet still producing results.