Tallery
7 years
pomp: It certainly will be tough. Sevilla, Celta and Real are all quality teams. And yes, 250! Woo!
Alex: It's a Shame Rodrigo is only a loan, because he is quality!
Wellseh: Thanks mate!
Maximus: Thanks mate, glad you enjoyed it :p
Walkinshaw: Thanks

Icarus
7 years
From when I stopped reading to now you've come a long way with those graphical updates! They must take you foreeeverrrr lol
Login to Quote 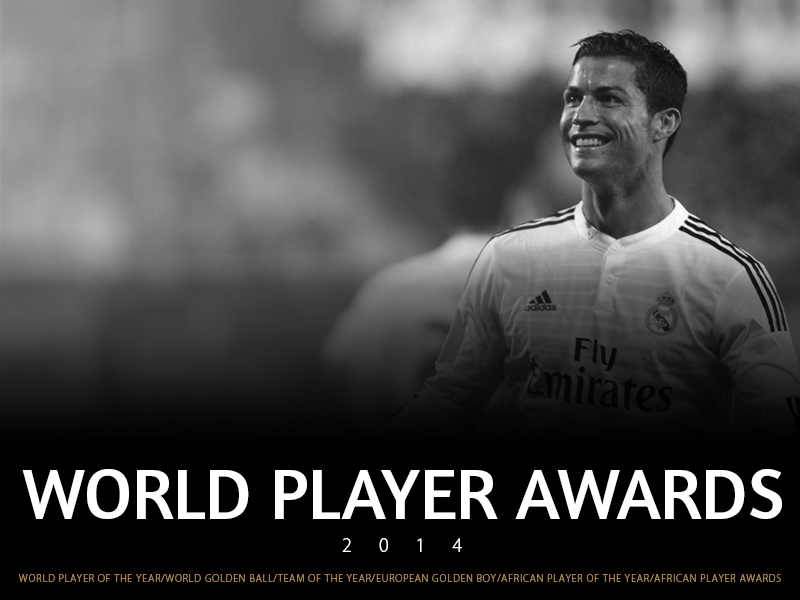 As the year 2014 roles to a close, the festive period is over, and with many leagues in the middle of their winter breaks, there aren’t many things for a football fan to look forward too, apart from one event, the Player of the Year awards. With a grand total of six awards to be given out on New Year’s Day, there are plenty of winners. Join us here with live updates from Zürich in Switzerland and 6th of October City in Egypt for the African awards. 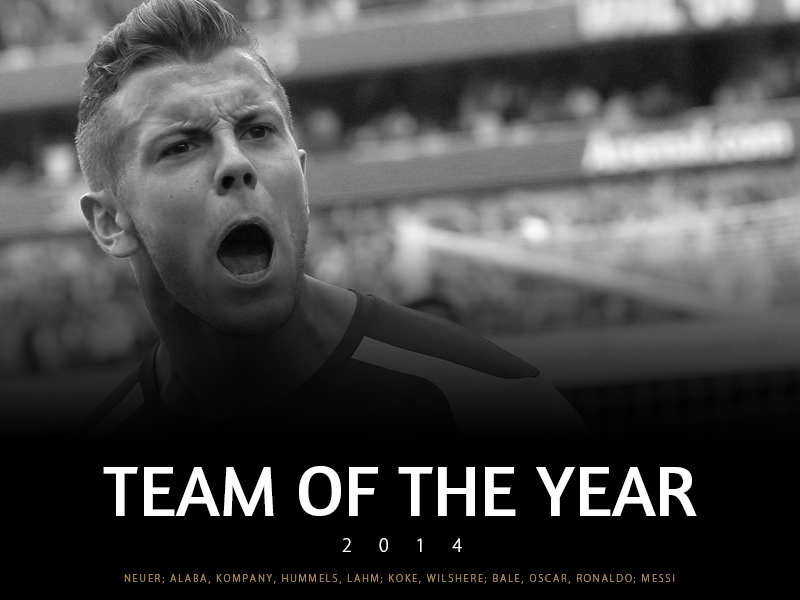 We cross live to Zurich first for the first award of the evening – the announcement of Team of the Year. German Manuel Neuer, widely regarded as the best goalkeeper in the world, claims the number one jersey, with Bayern teammates David Alaba and Philipp Lahm claiming the left and right back positions respectively. Partnering them in defence is Mats Hummels from Borussia Dortmund and Vincent Kompany, who plays for Manchester City. The midfield consists of Spaniard Koke, who turns out for Atletico Madrid, and his partner is the teams surprise conclusion, Jack Wilshere – who is the first Englishman to be selected for the team since 2010, when Ashley Cole was selected in the left-back position. In the attacking three, Cristiano Ronaldo and Gareth Bale play on the wings, with Chelsea’s Oscar in the number ten role. Barcelona’s Messi takes the striker birth.

The substitutes are also of high quality, with Thibaut Courtois and Eden Hazard of Chelsea, Thomas Müller and Javi Martinez of Bayern Munich, Pablo Zabaleta of Manchester City, Neymar of Barcelona and Zlatan Ibrahimovic of Paris Saint Germain making the bench. 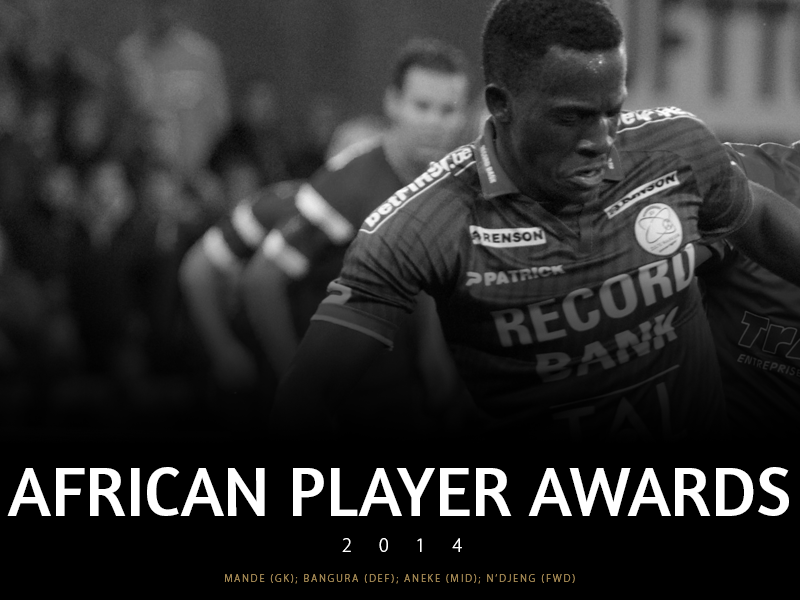 We now cross over to Egypt, as the unveiling of the African awards are revealed. Sayouba Mandé of Stabæk Fotball in Norway takes the Goalkeepers award, while Umaru Bangura takes first place in the defenders awards. The Sierra Leonean, who plays for Dinamo Minsk beat Clayton Daniels and Christopher Samba to the award. Former Arsenal player Chuks Aneke takes midfielder of the year award, with Valencia’s Sofiane Feghouli and Manchester City’s Yaya Touré left trailing in his wake. The African Striker of the Year goes to Yannik N’Djeng of ES Tunis in Tunisia takes the award, with Vincent Aboubakar, who plays for Porto and Katlego Mphela of the Kaizer Chiefs finishing second and third respectively. 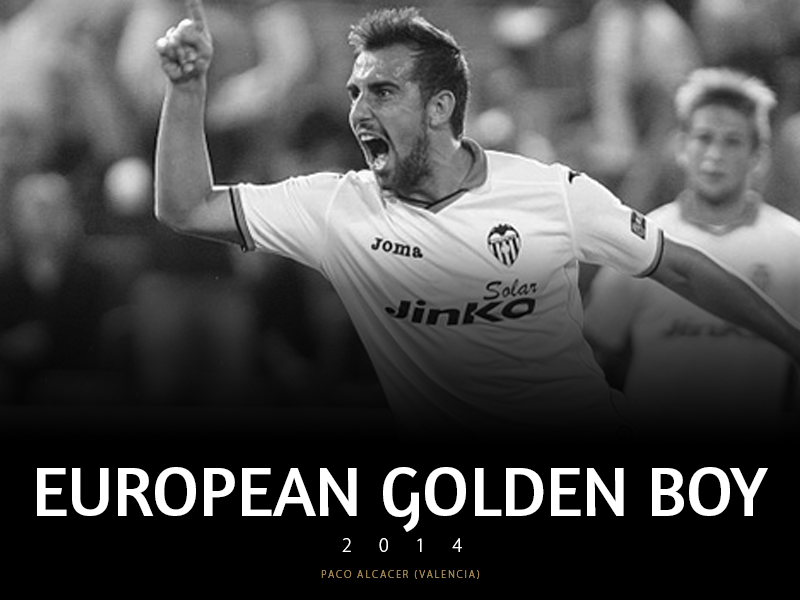 The award for Europe’s best young player is next to be given out in Zürich, and it goes to Valencia’s Paco Alcácer. No one can argue that the award isn’t deserved, as the striker has been key to Valencia’s success in La Liga this year, netting a grand twenty-two goals in nineteen appearances so far. The awards have gone to people like Paul Pogba, Mario Götze and Sergio Agüero in the past, giving Alcácer some real confidence that he can go onto be one of the biggest stars in the game.

African Player of the Year 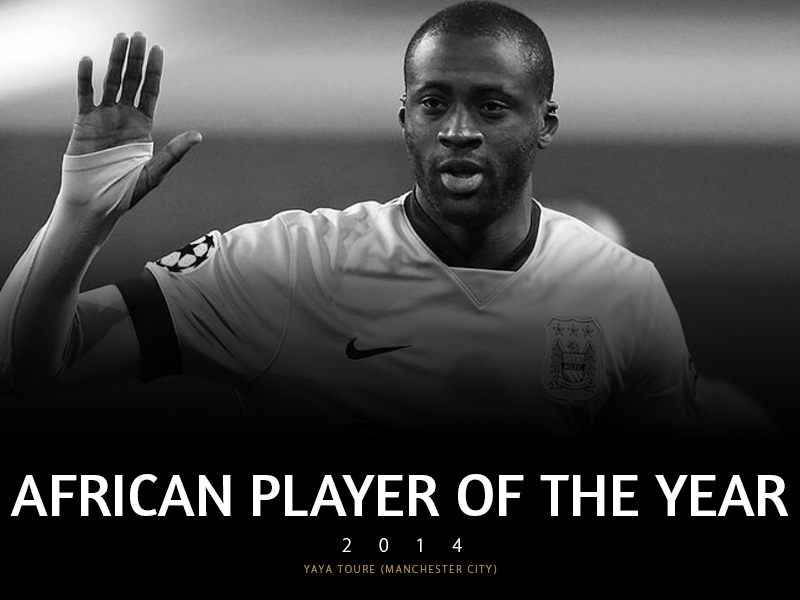 And now, we step up to the big awards. Manchester City’s Yaya Touré has been awarded the African Player of the Year, despite only coming third in the Midfielder of the Year award. With an average rating of 7.42 this year, he beat Valencia’s Sofiane Feghouli and Lokomotiv Moscow’s Mbark Boussoufa to the award, with the Algerian and Moroccan finishing second and third respectively. Touré, who was favourite for the award, has been a key player for Manchester City in the last calendar year, becoming the first midfielder since Frank Lampard to score twenty goals in one season on the way to Manchester City’s Premier League triumph. 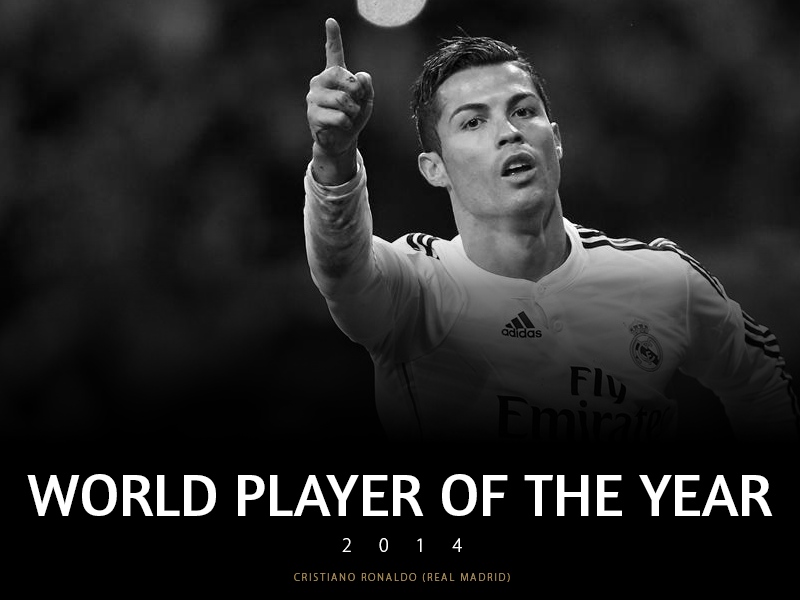 And we back in Zürich, home of FIFA in Switzerland, for the main event of the evening. As the gold envelope with FIFA’s official seal holding it closed is passed to this year’s host, Layla Fernandez-Taylor of InTheStands magazine, the tension in the air is huge. There are three contenders for the award, with Ronaldo, Lionel Messi and Zlatan Ibrahimovic all hoping their name is read out. And the award goes to Cristiano Ronaldo. The twenty-nine year old winger, who had been favourite for the award, has collected it for the second time in a row, after impressing the voters with twenty-three goals in twenty-six appearances this season. Barcelona’s Lionel Messi will have to settle for second, with the Argentine not collecting another personal award, something that has come easy to him in the past. Third place goes to the Swede – Zlatan Ibrahimovic – who has scored an impressive nineteen league goals this season so far. 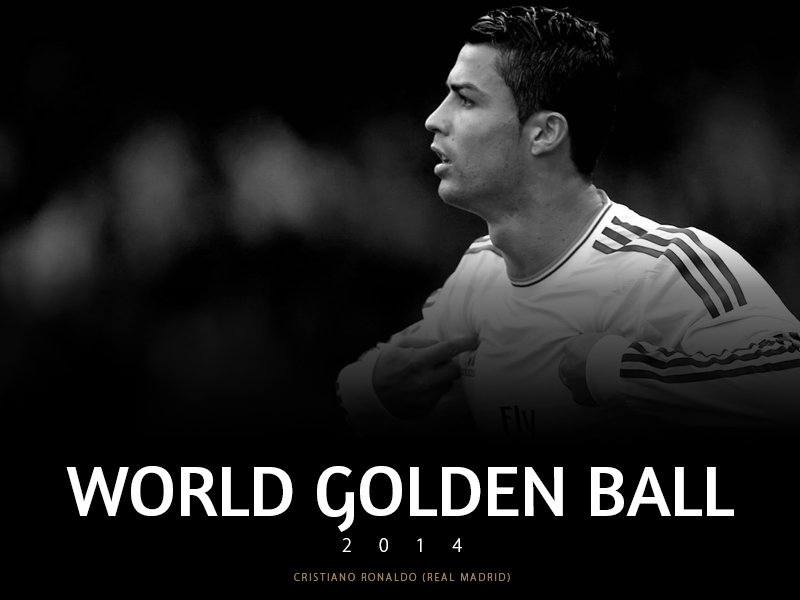 And the last award of the evening, and its arguably the biggest of them all. The World Golden Ball, or the Ballon O’dor as it is better known, is the one every player in the professional game wants to win. Inside the gold envelope is the name of the recipient of the award. The envelope is opened slowly, and a pause. Cristiano Ronaldo’s name is read out. The joy on this face is sensational. He fought off his main rival, Lionel Messi for the second year in a row, no mean feat, and the Argentine will have to settle for second place. Third place goes to Manchester City’s Sergio Agüero.
And that ladies and gentlemen, is all the awards for now. Join us next year for more awards!
Login to Quote

No1VillaFan
7 years
Awesome update! I love reading this story and will now follow it officially, safe to say that Ronaldo bossed the year then
Login to Quote

walkinshaw
7 years
Love the graphics mate they look awesome and Alacacerbecoming the European Golden Boy is a nice bonus.
Login to Quote


Great graphics, I love the professionality behind those black and white still frames, very nice update.
Login to Quote

Tallery
7 years
@Villa: He did

@Simich: He really deserves it, he has been sensational

@walkinshaw: Thanks, and it certainly is

@Iccy: I agree with you... Zap you are useless! Thanks


Well, I am going to start like this. I want to say a huge thank-you to all those that nominated and subsequently voted/voting for me, and those who actively follow my story - whether you are a member or not.. I was not expecting this at all, so it made my day logging on to see that I had been nominated. Second, I want to say sorry for not updating much, I will start to get updates out more consistently, and hopefully that will bring some more nominations and some more good times for Valencia!
1
Login to Quote

The Interview: Part One

I got a call from a girl from a magazine a few days ago, or well, my agent did, wanting an interview with me. I was in good form, and the press had been lapping it up, which - to be fair - isn’t the worst thing in the world, and an interview request was likely. So, after an hour’s discussion or so, it was settled, the interview would take place in Glasgow, Scotland – the headquarters of the magazine, a few days before the Sevilla game in Seville. It was my first proper interview since joining Valencia, so I was pretty excited. I love speaking to the press; it’s a good way of getting the fans to relate to you, whether it is in a good way or a bad way. I work of the fans criticism and love, it’s how I motivate myself before a game.

The interview was with someone that is relatively new on the reporting block, especially in Spain – but that was okay – she seemed to have a good reputation, and teammates that had had interviews with her this season said she was really nice – not only in personality – but she also looked pretty good too apparently – so I was also looking forward to seeing if I agreed.


My phone call with the player I want to interview went well, it was no laborious task to persuade him. He seemed up to it too, and my previous dealings with the club certainly made it easier getting the interview through the press department. Heh. They have no idea what’s to come.

The planning was carefully done – down to every little detail. And, strangely, the magazine is behind me, and has had more of an input into the whole planning procedure than anyone else. The Head Editor thought the idea was superb – he said ‘it was just what we needed’, and I am prepared to take the risks with the task at hand. But to make a name for yourself; you have to do something big, something that someone wouldn’t expect from you – and that is exactly what I am going to do.


As the plane touched down at Glasgow International Airport, an hour later than it should have due to strong winds and torrential rain – something happened frequently in Manchester, but must almost be a certainty in Scotland – I received a call. I was not breaking any rules, as the airplane mode sign on the roof above the seat I was sitting in was off, and I picked it up. It was a call from a number I didn’t recognise; it definitely wasn’t a Spanish number, as I would have recognised it and if it was a teammate or someone from the club, it would be in my contacts. I thought about ignoring it, as I was just about to stretch my legs and leave the plane, but I decided to answer.

“Mr. Negredo”, a man with a deep voice and a heavy Scottish accent said at the other end of the phone.

I was slightly confused, and without any manners or niceties, cautiously asked who it was.

“I am a senior police officer from the City of Glasgow Police service” he replied. I had to listen carefully, as his heavy Scottish accent was really hard to understand.

As I deciphered what he had said, it brought concern to me; why a police officer would be calling me, I thought – so I asked him that question. He seemed to understand me quite well, despite my poor English, as I never managed to grasp it properly in my year at Manchester City.

“I would like to inform you that we have had knowledge of a possible attack on yourself during your stay in Scotland. I would like to remain vigilant throughout your time in Glasgow, as we have no information on who could be behind the attack or where.”

I was completely shocked. I didn’t know what to say. I thought football had moved out of its ‘dark years’ and was definitely far ahead of those times in England. But, there was a seed of doubt that it would actually happen, I was only going to be in Glasgow for half a day or so – and therefore there would be no chance of an attack. I would be a few hours in the magazine headquarters, and that the security levels around me would be impressive that it would be hard to find away through.

Sounding a little shaken – my voice wobbled, I said back “thank you for informing me. I will be careful” and I hang up the phone. An attack? I chose to ignore it.
Login to Quote

Icarus
7 years
So no one dies?... And who doesn't understand heavy scottish accents? cmon now.
Login to Quote