Oz96
7 years
Great update as usual, mostly the graphics. Very honest interview of Marcelinho, first manager ever to not bullshit statistics at the end of the match. 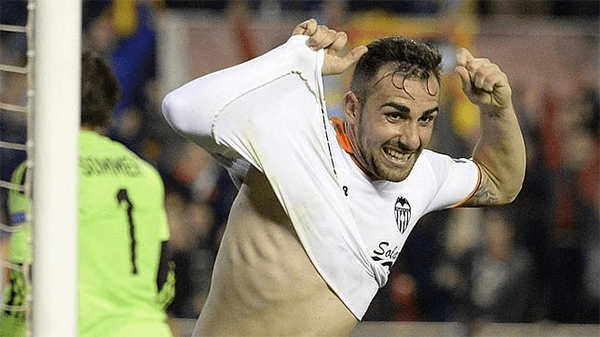 Paco Alcácer, of Valencia, is an example of top class footballers that have been produced by Spanish clubs in recent years

ESPN.com has today announced the leading clubs in La Liga for producing players that go on to play in one of Europe’s top five leagues. The numbers come from a recent study of where each player was developed. Each player had to spend three years at the club between the ages of fifteen and twenty-one, classing them as ‘home-grown’. Having home-grown players on your rooster is key, as requirements for both Spain’s top flight and Europe have to be met. These requirements are supposed to help clubs produce players from their own academy.

Barcelona top the list with twenty-six players plying their trade in Europe’s top five leagues. Many of them still turn out for the Spanish side, currently top of La Liga, showing an emphasis on youth can bring success. Players include the legendary Lionel Messi, who is widely regarded as one of the best to play the game, Andres Iniesta, Xavi and Sergio Busquets.

Real Madrid also have produced twenty-six players, which include Iker Casillas, who lifted both the World Cup and European Championships for his nation in their golden era, Dani Carvajal – who is slowly cementing himself in Real’s starting line-up, and forward Jesé, who is regarded as one of the best youngsters in the game.

Third place on the list is Athletic Bilbao, who have produced twenty players. Due to the club’s ‘Basque Rule’, the club has to put effort, time and dedication into its youth system to produce the calibre of players that can play competitively in Spain’s top flight.

Fourth place goes to Valencia and Real Sociedad, who have produced seventeen players. Players such as Manchester City’s David Silva and Atletico Madrid’s Antoine Griezmann have come respectively come out of the clubs production line in recent years. Paco Alcácer, José Luis Gayá and Carles Gil are more examples of Valencia’s successful youth development, as they currently turn out for the side they spent their boyhood years at.


Valencia boss Alejandro Sabella, who has eight Spaniards in his squad, including the in-form Paco Alcácer, also says it looks bright for Spanish football.

“The fact that clubs are willing to play Spanish players is exciting. One of my tasks here in Valencia is to play and produce good Spanish players for our team. I will, as I can, play Spanish youngsters to help them progress and break into the national team. I have all my faith in my young players, and I give them confidence to play their game, and so far, it has proved successful.”


Against the Barclays Premier League, La Liga’s main competitor, the statistics are promising, as last season, only a third of total playing time in England’s premier football competition were English players, and Spanish players equated for 5.94%.

“Spanish players playing in the Premier League is great for Spanish football too. The television deals that the league has is way above another league, so it actually attracts more people to the Spanish game, as people will say, ‘he’s good, where is he from?’ and this will boost Spanish football.”

Oz96
7 years
I am glad you did not mention Soldado as a product, more like a damaged one. Nice update overall.
Login to Quote

You updated!
Login to Quote

and it is developing nicely