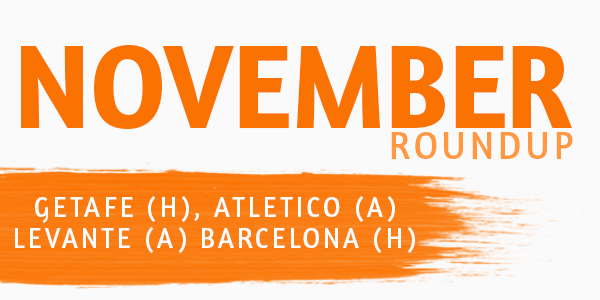 In the month of November, Valencia faced four fixtures. A game against Getafeat the Mestalla was first up for Sabella’s men, with the Los Che travelling to Madrid to play Atletico Madrid. An international break then followed, before a trip to Levante, Valencia’s closest rivals, before a highly anticipated potential title decider against Barcelona at the Mestalla. 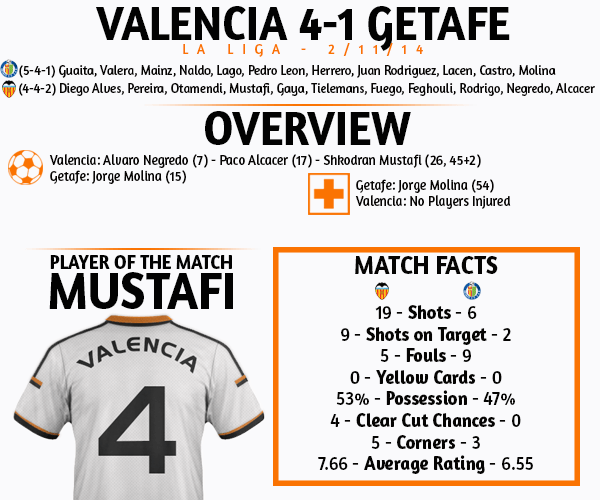 A very nice win to start off the month. We dominated the play, having the majority of the possession. We looked threatening on every attack, and had over half of our total shots on target, a pretty good rate if you were to ask me. We looked really good on set pieces, as Mustafi showed by netting two, and they are becoming an increasingly important part of our tactics. Overall, a very nice start to the month, but conceding a goal, a preventable goal, was slightly disappointing, but I won’t let this get past the fact we played really well. 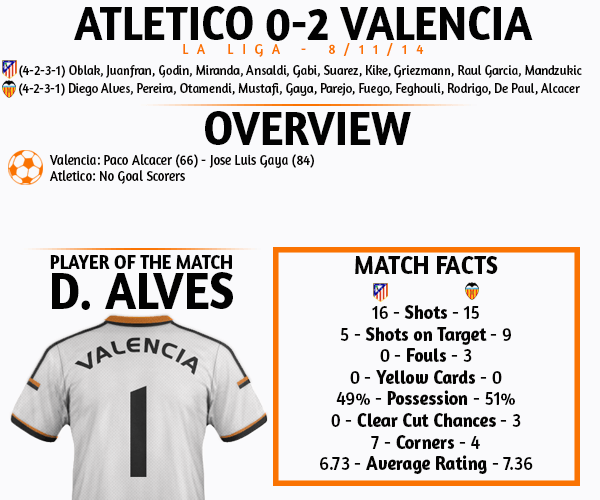 What a game, best my team have played all season. Despite losing, Atletico gave us a real go; they are a pacey, strong, physical side that gave us plenty of issues, so to come out with the win is extremely pleasing, but to keep a clean sheet is also very pleasing, as they challenged man of the match Diego Alves many a time, and he was our best player by far, he kept us in the game at points. I am also very happy for Gayá, as he netted his first goal for Valencia, just enforcing the point that I made during the month about how I want to play youngsters and improve.

The build up to this game was electric. It was my first derby against Levante, and you can tell how much the fans want to win this one. And boy, did we win it. Negredo was out of this world, netting a hattrick, albeit with two penalties, but he gave the Levante defence lots to think about. They rarely troubled us, which is good, but we did concede a goal because our defender got caught high up the pitch which is slightly disappointing, as the following cross also could have been dealt with, but we failed to do so. But overall, another pleasing game, and another game where we started to look good and hard to defeat. This result really could kick-start our season and our push for the title. 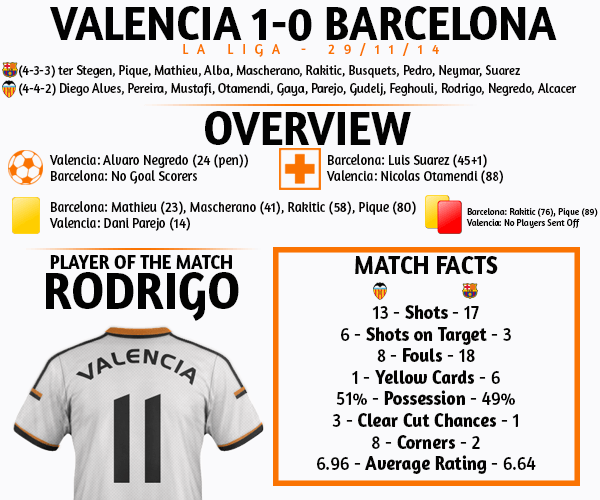 This game was probably the most important game of our season so far. If we were to win, we would go top of the table. And we certainly pulled it out of the bag for the occasion. We set up to allow Barcelona to have the possession, and then use Negredo as the focal point, throwing long balls towards him, as Barcelona’s backline’s height is something we needed to exploit. We would then use the pace of Feghouli and Rodrigo to take up and run in the space left by the oppositions high pressing wing backs. And it worked. We frustrated Barça, who did not play Messi or Iniesta from kick-off for some reason. They picked up five yellows, as their player’s lost their cool, and this resulted in two second yellows for Rakitic and Pique during the second half, making our lives a little easier, but we still had to play well to get the result. The penalty was a definite penalty, and after his hattrick last week, Negredo made no mistake of putting the ball into the back of the net, which was great. We also had more possession than Barça, which is something that not many team achieve, so that was also another really pleasing thing from this game. 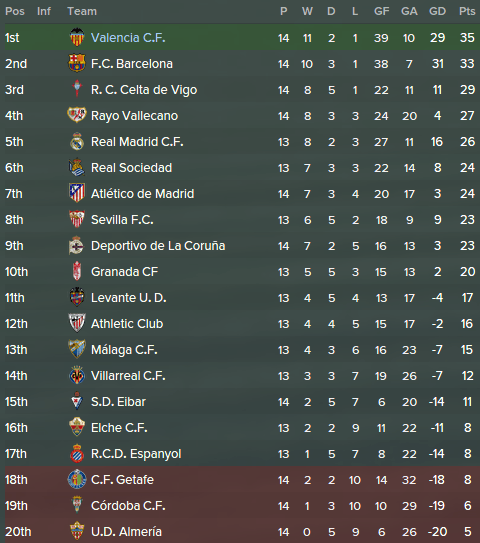 Valencia moved ahead of Barcelona with the win over them in the last game of the month. The Los Che have 35 points, out of a possible 42, a nice total for this point in the season. They have scored a very impressive thirty-nine goals, on the way of winning eleven, drawing two and losing one this season. They have also conceded a league low of ten goals, showing they are good defensively, but won’t affect their attacking prowess.

Oz96
7 years
Great month and spectacular two victories over Atletico and Barcelona, well done. No need to describe your graphics but they're fantastic.
Login to Quote

Zap
7 years
O M F G these updates are soooooooooo good wtf. I want to be as skilled as you at making graphics, this story is actually amazing you're amazing and I love it. I would say keep it up, but you obviously will, so good mate omg.
Login to Quote

Tallery
7 years
@Feliks: Certainly is :p
@Oz: you're too kind

@Zap: O M F G thank you wtf
@Justice: Certainly was, was over the moon
Login to Quote 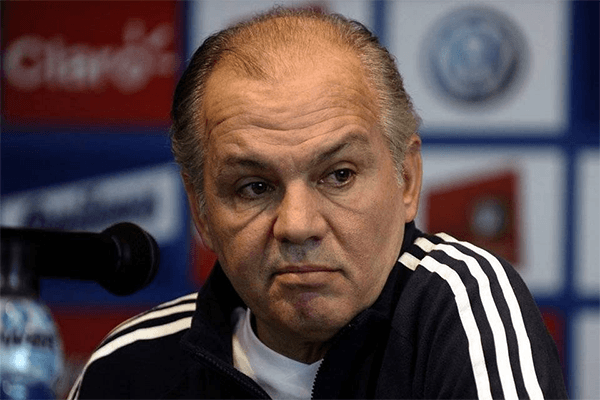 Valencia have announced that manager Alejandro Sabella has penned a new deal with the Spanish side. The Argentinian previously had seven months left of the one year deal he signed when he took the reins in the summer.

The sixty year old, who lead Argentina to the World Cup Final on their closest rivals turf, said he was really pleased to sign a new deal to extend his stay in Spain.

“I am very happy. I wanted a new deal, but didn’t ask, they came to me. That means I must be doing well. I am enjoying myself here and I want to stay and win some trophies now, that is my aim. Our league performances have been very good, and I am very pleased.”


After finishing eight last year under two different coaches, Sabella was drafted in to repair the club, a move that has so far been extremely successful, with the Los Che currently sitting first in La Liga.

Reports came out of Argentina that deal was in place before Valencia were due to kick-off in a potential title decider against Barcelona, and these rumours proved true, as only hours after Valencia’s win to put them top of the table the new deal was announced.

Valencia Owner Peter Lim had this to say about Sabella.

“Alejandro is a great manager with vast experience to his name, and therefore, we need him long term. He is doing great; he is improving the team so much, and getting the best out of the players. We weren’t expecting to be where we are now, so that is also a bonus!”


Sabella started his managerial career in his native country with Estudiantes in 2009, having previously played for the club. His time with the club proved successful, winning the Copa Libertadores, his first trophy as a manager, having previously been an assistant coach at various different clubs.

After two years with the club, he resigned, and not soon after, took the job of Argentina boss. In three years in charge, he took them to the 2014 World Cup Final, only to lose to Germany in extra time.

After the World Cup, he moved to his current club, Valencia, to try and repair the damage of previous seasons, a task that is so far proving easy for him, as he has only lost once in the league this season.

The new deal takes him to 2017, making it the last contract he signs before he possibly hangs up his chalkboard. It is thought his wage has risen to £30,000 per week, an increase on what he was earning before, along with a bonus for qualifying for Europe’s elite club competition, the UEFA Champions League.

Many fans have expressed their delight with Sabella’s new contract, with one fan hailing as the best since Benitez.

“He is very good. If we go on to win the title this year, he will go down as a Valencia icon, just as Benitez did. It will also be more of an upset than Atletico winning it last year, and after a while without anything to shout about, it will certainly feel good.”

Maximus
7 years
A well deserved new contract! Hopefully it will lift the players even more!
Login to Quote

InvertedWingbacks
7 years
nice new deal! and some great results in the league; keep it up man!
Login to Quote

Zap
7 years
Valencia clearly know a good Manager when they see one!
Login to Quote

@Maximus - hopefully it will

Gaya: I want to go to Liverpool 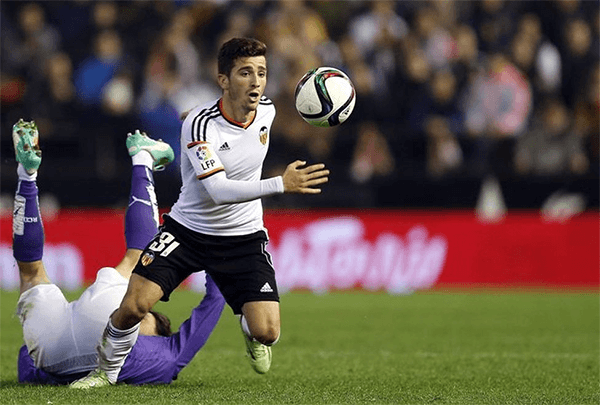 Reports coming out of Valencia today say that left-back José Luis Gáya wants to leave the club after hearing of interest from English side Liverpool.

The Spaniard reportedly told Sabella that he wanted to leave the club for Champions League football, something that Valencia don’t currently offer, but look certain to play in Europe’s premier competition next season, with Los Che currently sitting top of the table.

Speaking to the press, Sabella told them that he had no worries about the situation and that it is all under control.

“I am sure it’s all okay. We discussed it together and reached a solution. I have no worries about it, and to carry on as usual. We are okay, there was no argument, and it was a civilised discussion.”


Gáya started his career with Valencia, and has been one of Valencia’s most consistent players this season. Making his career debut for Valencia’s reserve side – Valencia Mestalla – four years ago aged fifteen, and the next season became a regular for the side, making a total sixty-four appearances for the B-Team, and scoring three times.

He then caught the attention of the Valencia boss last season, and was promoted to the first team, and made his first team debut, but did not play again. However, under Sabella, Gáya has comfortably become first choice and the performances have done nothing to prove that the nineteen year old is too young to play in Spain’s top division.

These performances have attracted interest from a couple of Europe’s top clubs, such as Liverpool and Tottenham, and the lure has proved too much for youngster.


Gáya’s current contract with Valencia runs out in 2018, and therefore, Sabella should have no worries about the player using his contract to force a move, and will be a big part of Valencia’s future that looks bright. However, potentially, the £25m release clause in his contract could cause a stumbling block in the future if clubs feel that he is worth that hefty price-tag for a teenager, and his current performances certainly justify that fee, and Sabella may look to tie him down with a larger release clause in the future.
Login to Quote

pompeyblue
7 years
This is being updated again? It better be...
Login to Quote