Laurens
7 years
The matches against Barcelona and Levante were not that good huh, anyway nice one aganst Cordoba. Hope you can end the season above Real Madrid.
Login to Quote

Zap
7 years • Edited
RicardoKishnaajacied: Barca were too strong and the Levante game was just awful and boring. Cordoba was easy because they're a really bad side though. My aim is to finish top 4 but if I could finish above Real that would be fantastic. I can't see Villareal dropping with the way they have been playing either and Barca have seemingly already won the league lmaoo
Login to Quote Athletic Bilbao traveled to Anfield for the first leg of their 1st Knockout round tie against Liverpool, on mixed form after the start of the year. The Basque team have won 4 and lost 4 since their first game of 2015 against Deportivo and are looking to finish in the top four in the league so that they can have another go at this competition next season, aswell as giving it a good go this campaign. Liverpool, on the other hand, have been superb since their 5-0 drubbing of Tranmere Rovers taking them into 2015. Since then they have only tasted defeat once after a shock 1-0 defeat away at Sunderland. There was no doubt who was favourites to qualify from this tie.

Liverpool opened up the game strongly with a few opening chances early on and in the sixth minute the hosts struck first blood. A nice one-two starting with Balotelli, moving to Henderson further inside the pitch, then back out to the troublesome Italian who found Sturridge making a dart into the penalty area. Sturridge looked up to see Gorka Iraizoz bolting off his line and the striker neatly tucked the ball underneath the charging Spaniard and into the back of the net.

For the majority off the first-half, the play was similar to the start. Liverpool kept hold of the ball and created chances. Athletic's luck came through a few times as Sturridge and Balotelli both missed clear chances to double the Liverpudlians lead. The best chance to widen the goal gap, however, fell to Sterling as the young star blasted the ball wide of the post when he really should have hit the net. The frustration in the 20 year-old was clear as he fell onto his knees and took his wrath out on a piece of cut-up turf.

Quique Flores must have been thanking the gods that his team was only one down at half-time and the Spaniard made two changes to his side for the second-half. Striker Borja Viguera was replaced by Aritz Aduriz and winger Ibai Gómez was swapped for highly-rated youngster Iker Muniain. Liverpool made no changes as Brendan Rodgers looked towards keeping the game going as it had the first-half.

Straight from kick-off the second-half looked as if it was going to be much more even than the first. Muniain looked lively as he made a dart down the wing and found Aketze just outside the box but Ager could not keep his following shot down. In the fiftieth minute Athletic found themselves on the counter with Iker Muniain, the winger crossed the ball over the other side of the pitch half-way into the opposition territory and Suseata continued the advance. Weaving into the box Markel found himself being crowded out by Sakho and Moreno but he managed to throw a weak ball into the box. Despite how slow it was crawling across the box, Ager Aketze found himself latched onto the ball and he slammed it past Brad Jones and into the far-left hand corner to pull his team back into the tie.

Just three minutes later and the following Basque support in Anfield were in dreamland. A Beñat free-kick from just outside the box was scrambled back out from scruffy defending, straight to Aketxe. Ager found Mikel San Jose, who was falling back just next to him. San Jose looked out wide towards Markel Susaeta and the winger smashed a cross in towards Aritz Aduriz, who managed to turn his large physique in time to push the ball past the keeper with his head. Athletic hadn't just equalised, they had managed to take control of the tie.

In true spirit, the Basque players didn't step back and defend what they had, they pushed out and kept their attacking presence. This was proving well for them until late on in the game. Bilbao were caught with too many men up trying to put the game to bed and Daniel Sturridge thread a past Mikel San Jose, who had found himself completely isolated with no back-up, into Sterling who powered the ball past an outstretched Iraizoz to bring the game back level.

From this point on, the game was incredible. The ball was up and down the pitch as both teams desperately wanted the lead going into the second leg. Deep into stoppage time Liverpool thought they had managed to drag themselves to victory as Sturridge blasted a ball through a crowded box, however the ball took a wild deflection and slammed off the post and into the feet of Itturaspe. Ander looked up and blasted a hopeful ball up field trying to start a counter, and it worked. Muniain picked the ball up and found that he was joined up with Aritz Aduriz, outnumbering Sakho's one man wall. Iker ran at Sakho before posting the ball past the Frenchman and into the path of the lanky Spanish striker, one-on-with the keeper. Aritz managed to fake one way and he fooled the Aussie keeper as he slotted it down completely the other side to give Athletic the lead again with the last kick of the game. The Spaniards celebrated the goal as if they had just won the competition and you could hear the supporters from the docks. Athletic were taking a lead back to San Mamés!
Login to Quote

No1VillaFan
7 years
awesome update as usual and you are ahead!

i hope you beat the scousers!
Login to Quote

Maximus
7 years
My god! What a brilliant match update!

pompeyblue
7 years
Love the presentation of your updates and the writing is quality too! Great result.
Login to Quote

Zap
7 years
Jack: Thanks mate, means a lot!
N1VF: Thanks and I hope so, fk the scousers!
Maximus: My god, thank you! It looks so, we just need to do the job at home now!
Pompey: Thanks mate, I appreciate your suppport.
Login to Quote They may have had a decent start to the new calendar year, however Bilbao have been sent crashing down to earth with an incredibly poor end to February. After their win at Liverpool you may have thought that this would have spurred the team on to some good results in the up and coming matches, but that really did not happen...
ATHLETIC 1-1 RAYO
MUNIAIN

The first of the two dreadful results to end the month, came against Rayo Vallecano when Los Franjirrojes visited San Mames. Athletic started the game positively, looking confident from their mid-week result in England. A few attacks were thrown at the Vallecano defence, however Aduriz didn't seem as if he could handle the extra fixture. It took until half-time for Bilbao to push themselves into the lead. Iker Muniain fired home a vicious shot from outside the box into the lower left-hand corner. After half-time it looked as if the whole Bilbao squad was replaced with amateurs. First touches seemed to run away and passing seemed to always curve away from their target. Rayo grew back into the game and in the 77th minute when on-loan Atletico striker Leo struck the ball through a crowded box and past a rooted Iraizoz. Things went from bad to worse when Aritz Aduriz fell to the ground in agony feeling the back of the leg and had to hobble of the pitch with the aid of head physio Paco Angulo. The game drifted on to end up in a disappointing draw.
EIBAR 3-1 ATHLETIC
IRAOLA

If you think drawing against Rayo was poor, I wonder what you'll make of this. Athletic traveled to Basque rivals itching to get back to winning ways, or at least the fans did. On the day the team never showed up and a below lackluster performance left the fans streaming out the exits at half-time. It only took 10 minutes for Eibar to open the scoring. Poor defending lead to winger Saul Berjon running clear in onto a one-on-one situation with Gorka Iraizoz and the former Barcelona trainee calmly slotted the ball into the net. The lead was doubled after a the Gorka performed the greatest comedy event of the season. Iraizoz ran well out the penalty area to clear the ball up pitch, however when he went to boot the ball the Bilbao keeper slipped and the ball ended up rolling towards Ruben Cruz who put the ball into an unguarded net from 40 yards out. After half-time they weren't much better either. The 2 travelling supporters left in the stands were given something to cheer about when Iker Muniain won a penalty mid-way through the half. Andoni Iraola stepped up and blasted the ball past his keeper to give his side a lifeline, but it was not to be. In the 90th minute Athletic were pushing on, trying to grab an equaliser when the home side caught them with too many bodies committed up top. Their counter lead to Saul getting hauled down inside the box and Ruben Cruz dispatched of the penalty to give Eibar a vital victory. Athletic were left in shame. 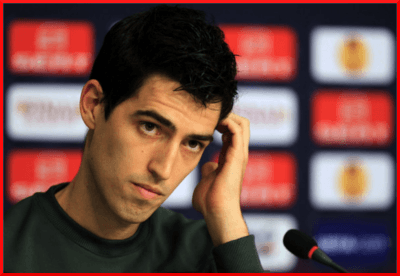 Andoni Iraola has been the only player this month consistent enough to pick-up this accolade. The right-back has grabbed three goals in the last month and produced an incredible display against Cordoba in our 5-1 victory. During the last two matches post-Anfield, Iraola has been one of the only players who still gave everything and has been doing so the majority of the season.
Login to Quote

Aaron
7 years
That's a pretty crap month, team best sort their shit out if they wanna be involved with Europe's elite next season

Iconic
7 years
Not a great month for you but you're still in a pretty good place, I really am in awe of your presentation it's amazing!
Login to Quote

Zap
7 years
Diazepamll: Thanks mate!
AaronHJFT96: I'll bash them if they don't.
Iconic: Not in a good place if we want Champions League football next season. Thanks, I put quite a bit of effort into how I present my updates so I'm glad you think it looks good!
Login to Quote

During the last few months I have struggled to find the motivation to update my story on a regular basis and the time distance between the updates that I did push out was growing larger and larger. I have not gave an update for 3 weeks and I have had a difficult decision to ponder on during that time and I have made a decision to end the story. It's a shame that I can't find the energy due to work commitment but that's life now and I have to get used to it. For this reason I'm hanging up my story writing pen for good. I may feature in stories in the future, but I can't see myself having the time to upkeep a story of my own.

So this is goodbye, I have had a fantastic time writing updates, be it Hearts or Bilbao, Leverkusen or BATE and I hope you have enjoyed reading. I can't wait to be able to sit back and read some more incredible stories from the likes of Tallery and Pompey, but for me the journey's over.