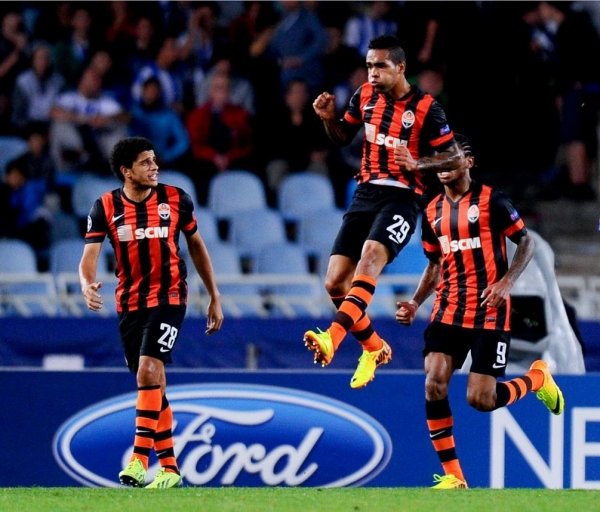 The long flight to Ukraine certainly seemed to take its toll on the Inter players. Shakhtar’s midfielder Fred delivered a cross to Douglas Costa who after only 12 seconds of play made it 1-0 to the Ukrainians. A disastrous start got even worse as Dmytro Ivanisenya fired a fantastic shot from 25 yards straight into the top corner and made it 2-0 barely 3 minutes later.

Following a bad start Inter stabilised their play and had several good chances but failed to make them pay. Instead Luiz Adriano leapt into the air and got his head on a beautifully placed corner kick from Darijo Srna and made it an astounding 3-0 to Shakhtar after only 30 minutes of play.

A furious Figo was seen kicking a thrash can and angrily yelling in Portuguese at halftime and it was to no one’s surprise that several players were substituted. But it didn’t really make any difference as a fired up Shakhtar pressed on and Alex Teixeira was able to make it 4-0 after a cross from captain Darijo Srna.

To little consolation for the Inter fans 18-year-old striker George Puscas got to score his first goal for the senior team.
Login to Quote

Jamesg237
7 years
Really enjoyed getting up to date on this story. A great choice of manager and well written updates. Keep it up.
Login to Quote

wellsy1498
7 years
Some great updates shame about the last result, keep it up

Kippax
7 years
Jamesg237 & Wellsy1498 - Grazie, really looking forward to the start of the season now, first save that I've never played ahead of my story!
Login to Quote 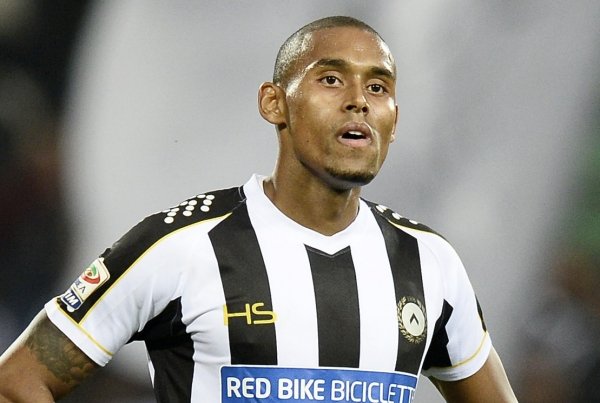 Udinese and Inter have agreed upon a €6.5m deal for 23-year-old Gabriel Silva. The Brazilian left-back was a hunted man in Serie A with A.C. Milan, Fiorentina and Roma all chasing him for his signature. Silva is capable of playing anywhere on the left side of the pitch and is gifted with very quick feet making him a lethal weapon when allowed to bomb down the left flank.

Silva was born in Piracicaba in Brazil and started his footballing career with his local team Rio Claro but he was quickly snapped up by the significantly bigger club Palmeiras. He broke into the first team relatively fast and his impressive performances did not go unnoticed by Udinese's well-organised scouting network.

In the winter transfer window of 2012 Udinese got a €4m bid accepted by Palmeiras, however the club had already signed 2 non-EU players that season which is the maximum limit in Serie A. But Udinese’s owner Giampaolo Pozzo was determined to sign the Brazilian left-back and solved the transfer by buying him, not with Udinese, but with his other club Granada in La Liga. Silva was then instantly loaned out to Novara to get some Serie A experience before joining Udinese in the summer. Following the chaotic move to European football Silva went on and established his place in the starting eleven for Udinese and made 47 appearances for the Bianconeri before signing with Inter Milan.

”With all respect to Udinese, I felt it was time for me to move to a bigger club. Inter is a team in a transitional phase that I want to be a part of and therefore I chose to join them. The competition is tough and I know Dodô since we both have played for the Brazil U20’s team and I’m certain that it will be an even race between us about the spot on the left wing.”
Login to Quote

OwenFWTFC
7 years
Great updates and enjoying the read. Keep it up!
Login to Quote

Walter
7 years
Tough result against Shakhtar but I'm sure things will improve!
Login to Quote

Jonte-23
7 years
Some nice updates, dissappointing loss against Shakhtar. But Gabriel Silva seems to be a good signing!
Login to Quote

Kippax
7 years
TButcher1, Walter, Jonte-23 - Grazie Amicos! Yeah a disappointing loss but hopefully we will be able to turn things around before the start of the season. Still got 1 friendly and 2 Europa League games left before Serie A kicks off!
Login to Quote

INTER ABLE TO TIE DOWN TRIO 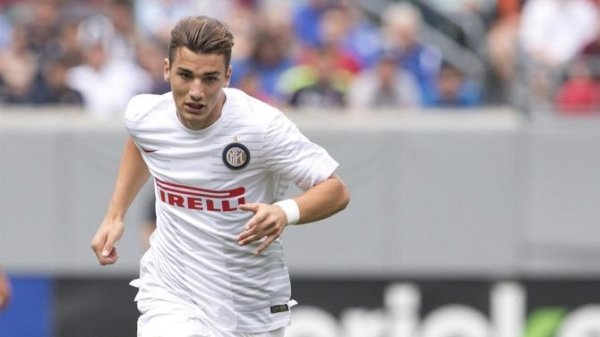 As a result of their impressive performances for Inter during the preseason the three youngsters Melkamu Taufer, Federico Bonazzoli and Giacomo Sciacca have all been awarded with new contracts extending their stay at Inter until 2017. The trio is believed to become a part of the first team in the coming season under Luís Figo, with Federico Bonazzoli being the most exciting prospect. He debuted last May against Chievo at just 16 years of age, making him the second youngest debutant in Serie A after former Inter man Massimo Pellegrini who was just 17 days younger than Bonazzoli at his debut.

Born in Manerbio in the outskirts of Brescia Bonazzoli joined Inter at the age of 7. The tall youngster has been compared, and rightfully so, with former Inter stars such as Christian Vieri and Zlatan Ibrahimovic. Bonazzoli is just 17 years old and he has already made 7 appearances and scored 1 goal for Italy’s U21’s, a remarkable feature at such a young age that of course made him a target for Europe’s top clubs. However with his heart on the blue side of San Siro he chose to extend his contract with Internazionale granting him a weeky wage of €4.000. 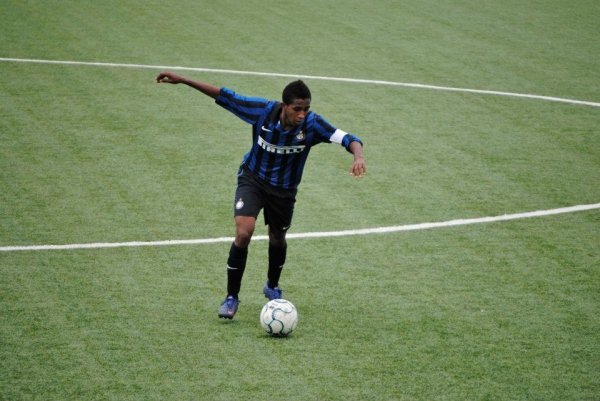 Melkamu Taufer is yet to make his competitive debut for Inter although he is already a star in the Primavera team. Ethiopia-born Taufer, born in 1998, is a tenacious box-to-box midfielder with a great sense for setting up goals. With a play-style quite similar to his idol Andrés Iniesta he seems to be a future star for Internazionale, maybe even a future captain as he currently holds the captaincy for the Italian U16’s team. Taufer has signed a pre-contract with Inter as he is only 16 and thus ineligible for a regular contract. 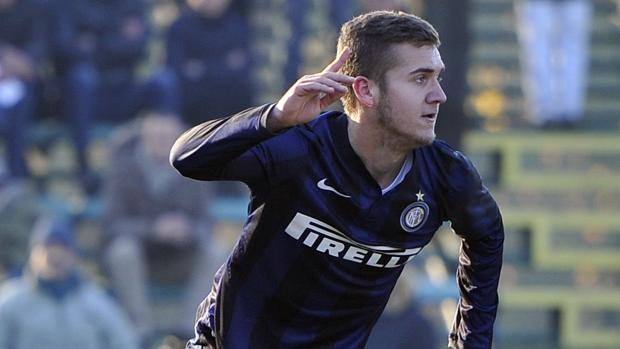 Giacomo Sciacca is the alderman of the trio, being born in 1996. The centre-back is relatively technical for a defender and is also able to play on the right. He, as well as Taufer, is yet to make his senior debut for Inter. Born on the southern coast of Italy in Selinunte he was expected to join one of the local clubs such as Palermo or Catania but as his father moved to Milano for work he followed him to join Internazionale’s youth system. Lazio and Cagilari have recently enquired about the 18-year-old defender but Inter waved off their interest and handed Sciacca a three year extension to his deal giving him a weekly wage of €1.000.
Login to Quote 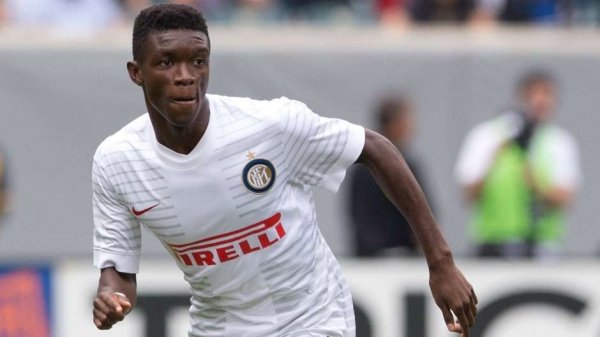 Today Hellas Verona confirmed that Ibrahima Mbaye will be joining the club on a loan-deal with an option to buy for €1.5m. By doing this Mbaye becomes Hellas Verona’s first black player ever. Since several Hellas fans are right-wing fascists, many of them downright racists, coloured players usually doesn't feel that welcomed at the Stadio Bentegodi.

Following several fines and punishments from the FIGC (Italian football federation) Hellas Verona voiced their concerns about the racist chants directed towards black players. The club has been working on a solution and hope that signing an up-and-coming black player could change the atmosphere around the club. The idea has been backed by captain Luca Toni who felt that the club would benefit from some positive exposure.

Mbaye came through Inter’s youth academy and was predicted a great future at Inter. He spent last season on loan at Livorno where made several impressive performances. The versatile defender felt he wouldn’t get enough playtime at Inter and therefore asked to leave the club. A new loan was expected for the Senegalese youngster but he insisted on moving away from Milano on a permanent deal. Fans have expressed their disappointment as they believed they had a future star at their disposal but Figo remains certain that letting Mbaye leave was the right choice.

”To be honest, at the moment Ibrahima doesn’t have what I’m looking for in my team, if he would have then I wouldn’t have let him go. I'm not sure whether he will return to Inter or not but we will definitely monitor him whilst under contract. I don't know if this transfer can do anything to prevent racism on or off the pitch but if it does then I know I did the right thing. Ibrahim is certainly in for a ride, but I believe he will be able to cope with the expectations.”
Login to Quote

Icarus
7 years
Mbaye is a really good player, sad to see you letting him go, the other one I would have opted for you to let go of was Sciacca, he doesn't grow much really.
Login to Quote

TheOtherSpecialOne
7 years
Story is coming along quite nicely, really love the effort that you put in every update!
Login to Quote 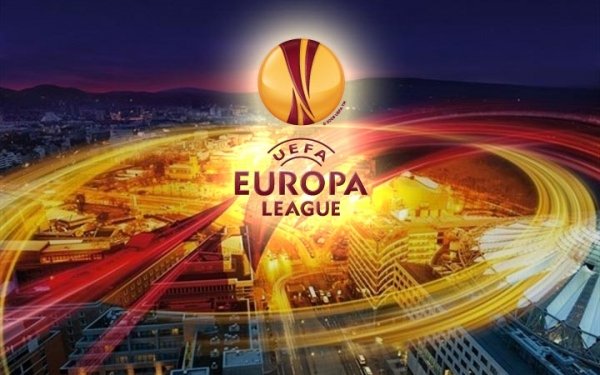 As of last season’s 5th place Inter will have to qualify for the UEFA Europa League through the playoffs. Today the draws were announced and it will be the Israeli team Hapoel Be’er Sheva who will stand for the opposition. Several big teams such as Tottenham Hotspur, Olympique Lyon, Villarreal and Feyenoord have to qualify through the playoffs this year as well and it was just sheer luck that Internazionale were awarded with the more favourable draw against Hapoel Be’er Sheva.

Even though the club has reached success within the Israeli Premier League it is relatively unknown to football fans around Europe. Last year Hapoel Be’er Sheva finished as runner-ups in the league and were awarded with a place in this year’s Europa League. They entered the competition in the second qualification round and were drawn against the Serbian team Jagodina which they easily defeated with an aggregate score of 4-1. In the third and last qualification round they were drawn against FC Luzern. The Swiss team didn't offer much resistance either and the aggregate score ended 3-1 to Hapoel Be’er Sheva. Their best player in the competition so far is the national capped Nigerian midfielder John Ogu who has scored 2 goals.

The other Italian team having to qualify through the playoffs is Torino. Last season they missed Europa League in dramatic fashion with a stoppage time penalty miss from Alessio Cerci against his former club Fiorentina which saw them finish in 7th place. Parma were able to grab the last Europa League spot but as they failed to comply with the Financial Fair Play Regulations of Europa League they were excluded from the competition. Torino were given their place and is therefore the other Italian team represented in the draw. They were drawn against the Cypriot team AEL Limassol.