I will do my best to keep him!
Login to Quote 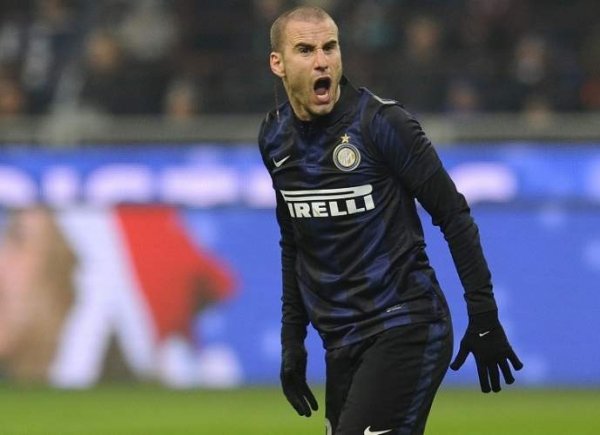 Dinamo Moscow today revealed that they’ve agreed on a €1m-deal with Inter to bring Rodrigo Palacio to the Russian capital in January. Dinamo Moscow’s sudden interest in the ageing Argentinian striker came quite surprisingly since he recently recovered from a broken ankle-injury and has only managed to play one game for Internazionale so far.

Although a solid win in the derby against Spartak Moscow, Dinamo Moscow lost one of their key players as 23-year old striker Alexandr Kokorin broke his leg and is possibly facing up to 10 months on the sidelines. The following week Dinamo Moscow manager Stanislav Cherchesov was spotted at the Stadio Luigi Ferraris where Inter faced Genoa. In that particular game Rodrigo Palacio made his first appearance for Inter under the management of Luís Figo and must have impressed the former Russian international player. Dinamo made contact with Inter and a deal for the 32-year old Argentinan was agreed upon.

Rodrigo Palacio was a key figure for Inter last season and scored 17 goals in the league but is apparently not in Luís Figo’s plans. The main reason probably being an incredibly high weekly wage of €115.000. He will however stay with Inter until the end of January as the Russian transfer-window currently is closed.
Login to Quote

Jer
7 years
Considering his wages are really high, getting 1m was pretty good.
Login to Quote

walkinshaw
7 years
nice job in freeing up so much wage...... no one wants to ever buy my rubbish lol

Kippax
7 years
walkinshaw - Yeah, quite surprised anyone even wanted him actually!
Login to Quote

I disagree, my friend. Palacio was amazing on my save. Practically he gave me UCL (alongside Icardi, Kovacic and Juan Jesus). I've played him as a Trequartista and he only doesn't make it rain.

But that goes from coach to coach

Kippax
7 years
aapsychoshow - Oh really? I hope he makes some good performances for me as well as i get to keep him until January!

Icarus
7 years
He's in no way shape or form Mediocre. Irl in the past 2 season he has held the team up like strong glue, Only this season he has had somewhat of a fall in performance due to injuries and World Cup strain as Argentina played all the way into the Final

With that said, his wages are pretty high on FM and considering the age you done well to sell & get some cash. Shouldn't be too hard to replace I suppose

Kippax
7 years
Icarus - In real life I know he's been really good, although on FM i believe he's quite mediocre compared to Icardi and Osvaldo who's not really reached their peaks yet. And as said, his wage...

GREAT RUN OF FORM FOR INTERNAZIONALE 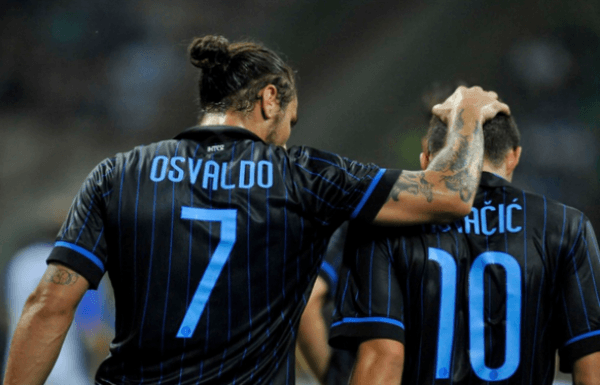 As November is reaching an end Internazionale find themselves in 4th place after a relatively successful run of games in the Serie A. In their Europa League group Inter finds themselves comfortably in 1st place with the double wins against Wolfsburg being the most notable. 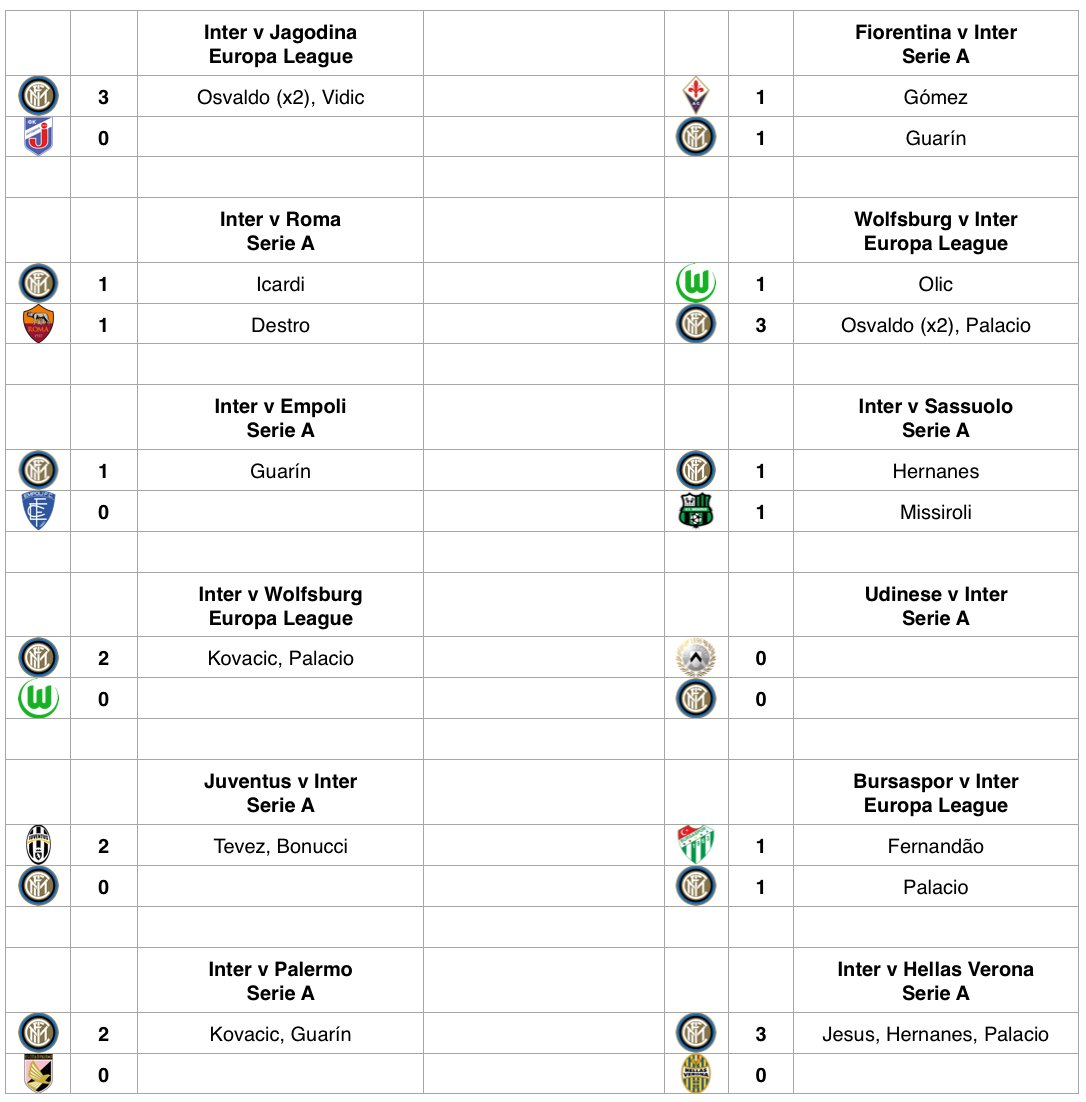 Mateo Kovacic and Pablo Osvaldo have so far been the key players in Luís Figo’s team. Kovacic has so far achieved 3 goals and 5 assists proving his immense qualities. Talks are being held with his agent to extend his contract although there are many doubts they will reach an agreement. Thus the rumours surrounding him and his future at Inter have intensified with Manchester United having joined Real Madrid and Barcelona in the race for the young Croatian.

Yaya Touré, Marco Verratti, Younes Belhanda and Anderson Talisca are those being heavily linked with a move to Milano should Kovacic decide to leave. What happens is yet to be seen, all we know is new Inter-owner Erick Thohir is willing to spend.
Login to Quote

LLMCrumble
7 years
A mix of results there! Your updates are amazing 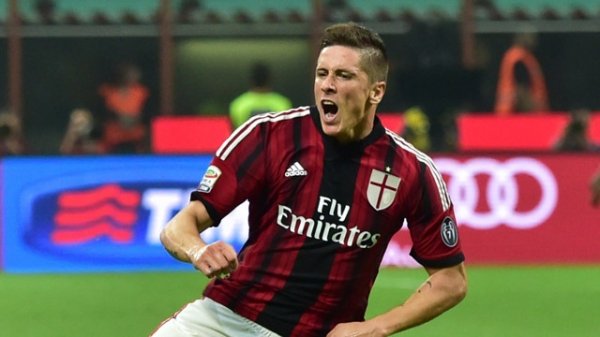 The first half of the season has come to an end. Inter is parked at 6th place in the Serie A table following disappointing results against Sampdoria and A.C. Milan in the Derby della Madonnina. However they have finished in 1st place in the group stage of the Europa League and thus qualified for the first knockout stage where they will face Ukrainian Dnipro Dnipropetrovsk.

With January approaching Luís Figo stands before several challenges. Rodrigo Palacio is set to leave Inter for Dinamo Moscow and even though Icardi has found his form and scored four goals in the three last games a replacement should probably be signed in case of eventual injuries. Another challenge the Portuguese manager stands before is retaining Mateo Kovacic at the club. Even though his promises to stay if the club reaches Champions League a move seems imminent for the talented midfielder. Although the main challenge will be keeping Inter at the top of the table as several teams are competing for the top 3 places this season.
Login to Quote