C.J.Lippo
7 years
Making it look easy mate, keep it up!
Login to Quote


December started off In style with a comfortable win against Newcastle United thanks to two first half goals from Eden Hazard and Loic Remy, we were always in control and never looked like conceding, never mind losing. It was a match where it was all won in midfield as Matic and Mikel marshalled the last line in midfield to perfection and never gave Remy Cabella or Sissoko and time to get the ball under control and do something with it, overall a very comfortable victory and a great start to the month.

Tottenham proved to be a very tricky away match, we couldn't get any kind of attack going and even looked quite poor in possession, Tottenham did create the best of the chances throughout the 90 minutes but couldn't find a way past in form Courtios. The only goal of the match came in the 32nd minute as Hazard capitalised on an error from Eric Dier as he tried to lay the ball back to Lloris, but Hazard was there to intervene and slot the ball into the empty net, a true smash and grab, but still 3 points. 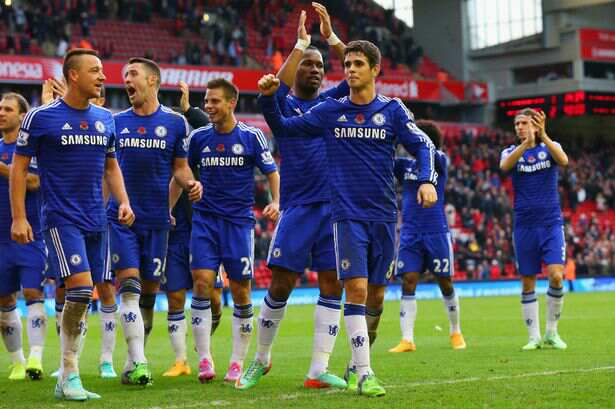 Terry and Co. celebrate a massive win against Liverpool as this pushes them further ahead in the race for the Premier League title


Chelsea v Liverpool, the match everyone was waiting for this month as first and third fought it out, Liverpool trying to end Chelsea's unbeaten run, which really didn't look like happening.
I decided to set up in a defensive formation to counter Liverpool's dangerous trio of Balotelli, Gerrard and Coutinho, the first half did have a few chances but most were from long range as either goalkeeper wasn't really tested, Matic and Mikel yet again forming a near impenetrable wall in front of Terry ad Cahill, the second half though I decided to change things around and go with a 4-2-1-2-1 cause I noticed Gerrard was getting a little tired so that extra man further up in midfield would help pile the pressure, and it didn't take long as John Terry rose the highest from a Lewis corner to head the home side into the lead, before anyone had the chance t sit down after celebrating, Remy grabbed Chelsea's second with a tidy finish inside the 18 yard box. Liverpool finally decided to come out of their shell and attack, but it came to nothing until Sturridge pounced on a fumble from Courtois in the 89th minute to make it 2-1, and that's how it stayed.


December didn't end well at all though as we suffered our first and second loss in consecutive matches to Hull than Aston Villa , which bought a bit of a downer going into 2015.

Xander
7 years
Its just the scourers, nothing too hard. Keep up the top work

Diazepamll
7 years
I like it, Good luck mate and nice simple design. Rock on,
Login to Quote 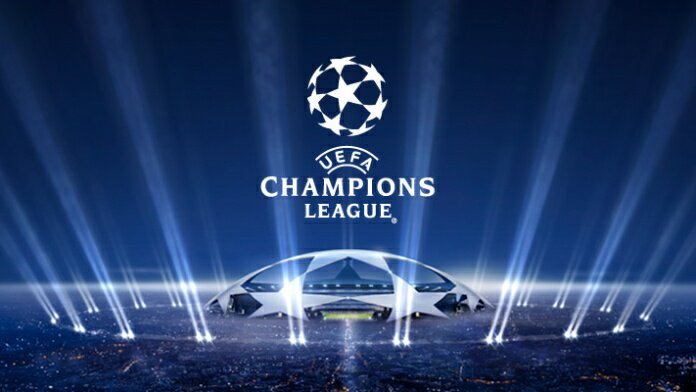 
the draw for the first knockout round of the UEFA champions League has been made, and there are definitely some very intriguing ties.
Current holders Real Madrid face an Arsenal side who are desperate to right their wrongs in the Champions league in recent years, and will be hoping to give Real Madrid a tough fight in this tight looking matchup, the difference could be Cristiano Ronaldo who has 15 goals in 20 mactches this season.

Borussia may be languishing in 6th place in the Bundesliga but they'll have the chance to knockout runaway leaders of Serie A Juventus in this match which is a prime example of two coaches with two different philosophies on football. Marco Reus and Carlos Tevez will both be key to their respective teams here

Barcelona currently sit 4th in La Liga after a somewhat indifferent start to the season, but will be hot favourites to breeze past Scottish champions Celtic, Messi and Co. will be excited to face a defence which has looked leaky in a relatively weak league.

its a battle of the money here as PSG face Manchester Ciy, both clubs have spent 100's of millions in recent years and have received criticism for buying their respective titles, many wonder if either club have the players to challenge for European honours. so this should be quite an interesting match

Chelsea have started to runaway with the Premier League and face German leaders Bayern Munich in a match most people will struggle to predict a winner. Bayern are a good side but the lack of good sides in their domestic competition may hinder their chances here, Chelsea will be confident in progressing

Shakhtar play Leverkusen, Basel will have it very hard against a very strong Napoli side, and Olympiakos will be confident of progression against Monaco who have struggled for any kind of form this season and currently sit 7th in Ligue 1.

Bashy345
7 years
Tough draw but I see your side breaking through. Good luck
Login to Quote

LFC
7 years
Really tough draw there, Bayern are always a hard team to play on FM and you'll do well to get a result. Nice update

LLMCrumble
7 years
Very tough draw there! Good luck and a great start to the story!
Login to Quote 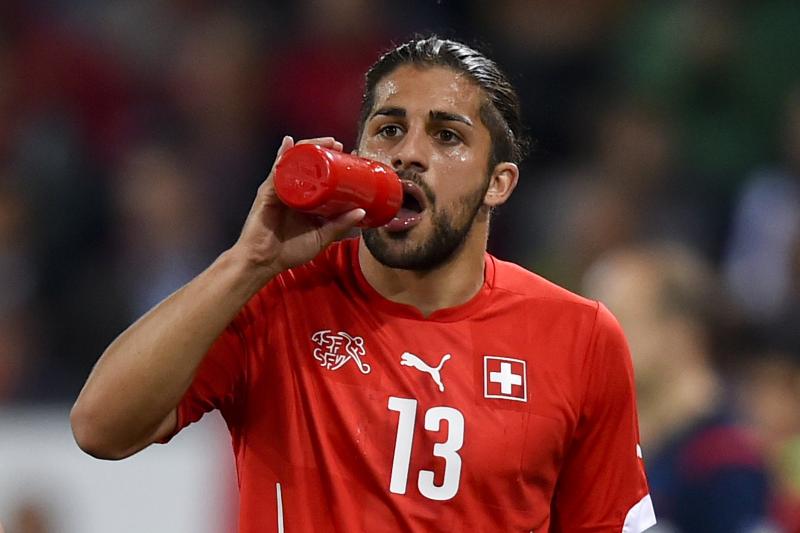 Chelsea have signed Switzerland left back Ricardo Rodriguez from Wolfsburg for a fee of $41 million.
The Stamford Bridge club made the 22-year-old their primary target for the January transfer window. Ricardo flew into London on Saturday and has now completed his move, penning a four-and-a-half-year deal.


Chelsea did put in a big earlier in the week of $32.5 million but Wolfsburg would not budge from his minimum fee release clause


Cuadrado said: I am very happy and thankful for this opportunity Ive been given. This is a great club and honestly it is like a dream to join the Chelsea family and to know that the manager believes in me. Im happy.
'It's really going to be brilliant to work with one of the best coaches in the world. I think he's going to make me grow into a better player.

'Chelsea have big players so we want to win big things

And he added a final message to the fans: 'Best wishes to all of the Chelsea fans, I hope to perform in the best possible way, I hope we can achieve a lot of things together.'

Chelsea have described Rodriguez as a 'pacy and strong' individual, who is a 'purposeful attacking threat with an eye for the spectacular'.


The winger wrote a heartfelt message to Wolfsburg supporters as his switch to Chelsea moved closer to completion.


He said: 'Wolfsburg will always be in my heart. 'The people are extraordinary. The fans full of passion. The club launched my career and gave me the opportunity to grow also thanks to a great club and exceptional team-mates,


'Now a new journey awaits me. New emotions. New objective. But always with Florence in my heart. Thank you to everyone! Ric.'
Login to Quote

Xander
7 years
Ricardo Rodriguez is a tank. He will only do good thinks for you
Login to Quote

LLMCrumble
7 years
Looks a great player from what I've seen of him! Hope he does you well!
Login to Quote 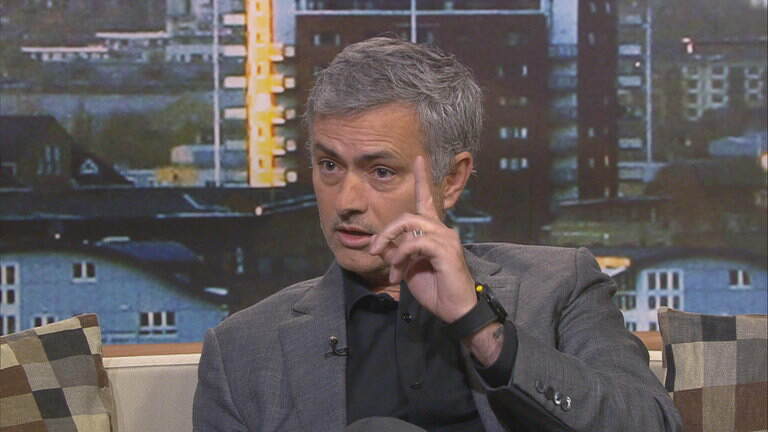 
Chelsea manager Jose Mourinho pulled no punches on a variety of topics during a surprise interview on Sunday.
The Chelsea manager saw his Premier League leaders held 0-0 by rivals Manchester United at Stamford Bridge on Saturday in a match shrouded in controversy.

Mourinho felt his side deserved to be awarded two penalties and slammed the decision to not send off Wayne Rooney for his reaction to a challenge from Matic, who appeared to be a bit late with a challenge on the Manchester United striker

"What can I say that everybody doesn't know? There are things in matches where there is space for discussion and different explanations and points of view. There are actions where there is only one point of view.

"It is what it is. I think if you say it in a way where you go over the line with your comments, I think it's understandable but if you just say what is obvious, without attacking the integrity of the people, if you're just honest and objective in your comments then it shouldn't be a problem.

"At half-time, United should be playing with 10 men and Chelsea should have two penalties. Normally, we win 2-0 or - let's put in the possibility of missing one of the penalties - we win 1-0 and play against 10 men. The reality is that in the end, we played against 1 men and dropped two points.

"The arm [Wayne Rooney's] came swinging in a backward motion, you could see he lined up Matic and was very precise in the way he done it, referee Atkinson 'apparently' didn't see it, but the whole stadium did, please explain how that happens?

"For me, it's a red card everywhere.

"The best players in the world can make mistakes. They miss penalties. They lash out in frustration. This gentlemen is one of the top referees in European football. He can also make mistakes. He made important mistakes yesterday.

"I know to be a referee is so difficult. Sometimes I referee in the training session and I ask for assistance. But there are situations that are not open to interpretation."

"And he said any one of the four incidents I spoke about with him he didn’t see. Or he saw what he decided. So for him there was no reason for a card.” therefore the game went on 11v11

"If you're asking me about the nine points difference I would say, if we're in a normal situation where mistakes are part of the game at this point, we are talking about the points at Villa, the points at Hull and we would be 15 points ahead."

"We letting him go for different reasons. First of all, I think the motivation Petr has to play in the first team, has outweighed his love for the club, so I understand what he wants and what he needs

"Secondly, we open the door for him to choose his future and we thought he'd go to try somewhere different, maybe come back after a couple of years to do what he wants. We would have found a new department for him! What he did for Chelsea for more than one decade was something amazing.

[he's one of the best players I've managed]. A goalkeeper is the most pressured position in football, one mistake and it haunts you for a lifetime, but luckily Petr made minimal mistakes and the fans will remember him for all the good hes done for the club, on and off the pitch.

"He has a dream job that we'd all love to have. I think every manager in the world would like the stability by being here year after year after year, to buy to sell and rebuild and wait and wait for success."

ON THE REST OF THE SEASON

We've had a great start to the season thus far and only lost two matches, which should have won, No disrespect to Hull or Villa, but they are teams we should be beating.

If our record against Manchester United, City, Arsenal and Liverpool continue, which currently sits a 5 wins and a draw, we'll win the Premier League by April, and no one will get in our away of another title
Login to Quote