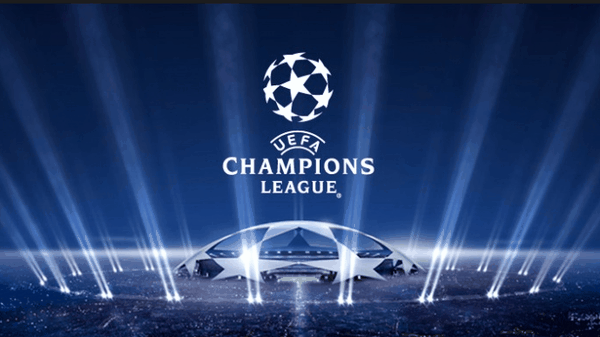 The draw for the Knockout Round of the 2015/16 UEFA Champions League has been announced, and two of the English teams have been dealt a cruel blow by being drawn against two of the toughest teams on the continent with Manchester United facing Barcelona and Everton facing Bayern Munich.

Arsenal, meanwhile, have a tricky tie with Atletico Madrid.

What’s your reaction to the draw? Let us know.

MJK46
7 years
Lot of great matchups there I am looking forward to seeing how you will do. I bet you will easily advance.
Login to Quote

Iconic
7 years
Some massive draws here will you please do a general update on most (if not all) of the results? It will be a really tough match against Atletico, you may need some brilliance to get you through. Will also be interesting to see how do Everton against Bayern as well as Barca Vs Man United and Juve Vs Liverpool. Some quality write ups here, keep it up!

Diazepamll
7 years
I think it will be interesting everywhere.. 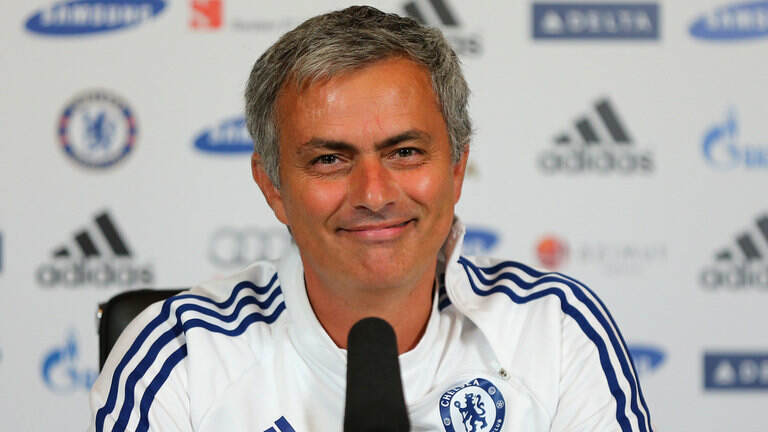 Monday's Champions League draw has paired Chelsea and Atletico Madrid after the London club won 5 out of the 6 group games conceding only 1 in the process, whilst Atleti finished second behind Liverpool, at the conclusion of the draw, Mourinho spoke with BBC Radio to tell us his thoughts on the draw, and the this season Champions League

"We don't fear anybody, but we know there are very good, strong teams in this competition,"

"Last year we went onto win the Champions League and we didn't have the team playing at such a high level as we do this season, so we can dream we will do it all over again and be the first club to retain the title, But let's see if the sharks let us, because there are a few sharks in the ocean."

While Chelsea have avoided the likes of fellow group-winners Real Madrid and Bayern Munich, French champions Paris St-Germain and Italy's Serie A-winners, Juventus, finished second in their groups and could have proved tricky knockout opponents, but Chelsea did avoid manage to avoid any of the real big boys left in the competition.

The draw for the last 16 of the Champions League prevents sides from playing teams from their own association, or sides whom they faced in the group stage.

Mourinho believes "the real Champions League starts now" after Chelsea stormed through their group scoring but only scoring 8 goals.

"I don't think any of the big teams are out of the Champions League now... maybe Arsenal," he added. 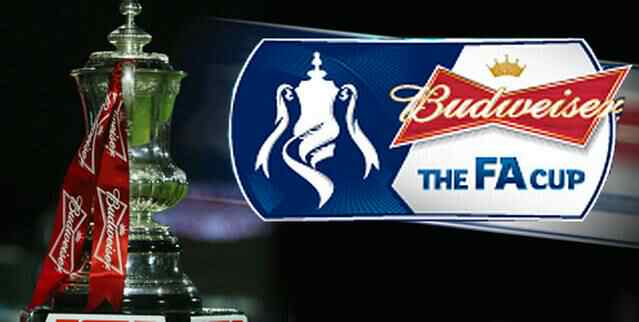 Mansfield, the lowest ranked side left in the tournament, were hoping for a bigger side in the third round draw, but had to deal with a home tie against Leicester City.

"It was a bit of an anti-climax! I wanted Manchester United to be honest. (Mansfield manager) We will just have to give it our best shot."

Conference Premier sides Gateshead and Dover were both rewarded with games against Premier League sides.

Current EPL holders Chelsea have been drawn against Arsenal and a trip to the Emirates, while Reading entertain Manchester United at the Madejski 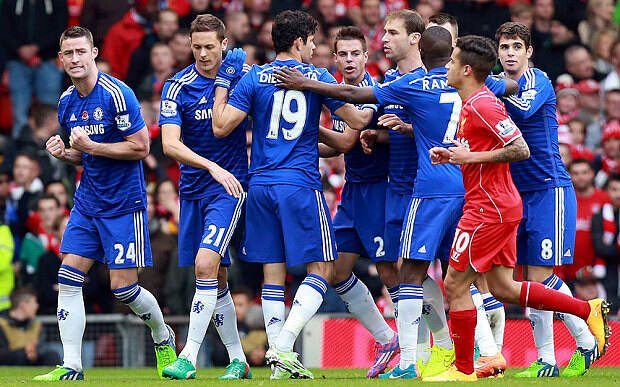 The last time these two sides met, Balotelli, in the words of manager Brendan Rodgers, reached one of the lowest points in his career. The Italian reacted to a bad challenge from Ivanovic, as Mario got up and stamped on the defenders fingers as he walked away.

But Chelsea shackled Liverpool's chief tormentor in a performance which saw the Londoners outmuscle and overpower their opponents.

Rodgers' side, who sit second on the table, have hit a rough patch in their last two matches and have only managed the one goal in two matches.

Liverpool could not have wished for a better start though as Lallana rushed through Chelsea's defence before being brought down by John Terry, Mario Balotelli who is known for his tremendous record from the spot stepped up and dispatched his spotkick into the bottom right corner.

Chelsea's response to going behind was to surge forward relentlessly, Gary Cahill went a fraction wide with a bullet of a header, Hazard had a penalty appeal turned down, while an acrobatic save from Mignolet prevented Oscar from finding the top corner.

The visitors were dominating the midfield and there was a sense of inevitability about Hazard's leveller. Although, arguably, the home side could have cleared the danger as Oscar's pass ricocheted off Sakho's shin and fell kindly to the Belgian, who clinically found the top corner for his twelfth goal of the season.

Hazard's virtuosity combined with the ballast provided by Matic, Mikel and Ramires in the middle of the pitch forced Liverpool into uncharacteristic rash passes.

The first half belonged to Chelsea, but, after the break, the home team showed glimpses of the effervescence which had seen them have such a great start to the season.

Sakho directed Jordan Henderson's chipped pass towards the woodwork, a Emre Can half-volley forced Jan Oblak into action and then came the first penalty appeal as Azplicueta clambered on top of Sterling.

In between a flurry of Liverpool chances, Mignolet came to his team's rescue, preventing Hazard from grabbing his second of the match, and it was Chelsea who finished the stronger.

An alert Mignolet dived low to stop Matic's dipping strike and, as the game neared a conclusion, Loic Remy provided Anfield with a moment of brilliance as he took the ball down on the chest before sharply turning Stevan Savic, Remy then had the composure to bend the ball ever so nicely into the top right corner as a onlooking Mignolet didn't even bother with a courtesy dive, the Chelsea away fans broke into pandemonium, the stewards could hardly hold Remy back as he went over to celebrate

paokarakis
7 years
Well the first comment is up ,smooth December with the unfortunate result against Spurs!

Keep it up ,the story turns out fantastic :DD cheers
Login to Quote

MJK46
7 years
Very good December except for spurs. Hopefully the new year brings all the riches to your club
Login to Quote

It may take more than a campaign to stop Chelsea this season.

Jose Mourinho has been warned by the FA for insinuating that referees were being influenced by the media and therefore not giving his team the benefit of the doubt in key decisions. And he was given further ‘evidence’ for his dossier when referee Mike Jones failed to give them a penalty for a Mangala handball. 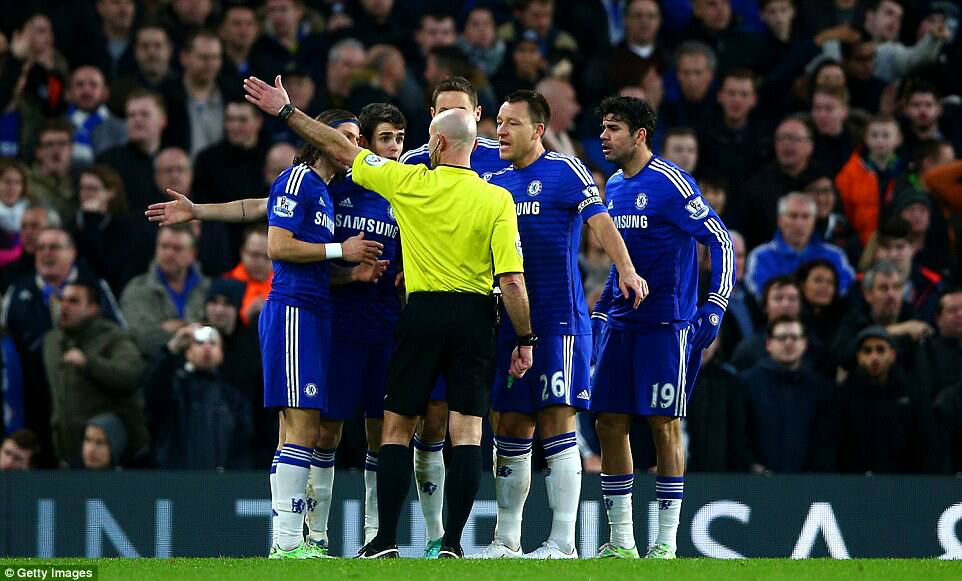 But whatever the FA rule, it will prove largely irrelevant in the long run. For Chelsea look to be the team most likely to take advantage of opponents’ weaknesses and forge ahead in the title race.

They were scintillating, Eden Hazard’s chipped pass and Oscar’s flick for Diego Costa’s goal will bear multiple replays. At times, however, Chelsea really did make it look easy.

This may be Slaven Bilic's last match in charge of City — a draw and two defeats hardly represents compelling credentials since Pellegrini's departure to Arsenal — with Roberto Mancini in discussion with the club, City really didn't show up for match and if Mancini is to be installed he'll have a lot to do.

So it was all the more galling for Bilic's’s team when Chelsea, having threatened very early on, were presented with a chance to take the lead inside 5 minutes, Willian was the opportunist, taking a quick short corner which out-witted Mangala and found Branislav Ivanovic. With City unprepared, it was a relatively easy task for the Serbian to find Costa at the far post for a simple finish 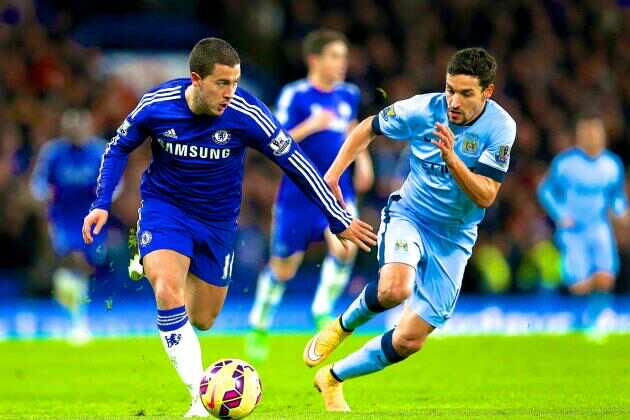 Hazard leaves Navas for dead as he bears down on goal

‘It was very frustrating — we switched off, like we did against Liverpool,’ said Bilic. ‘I made a big point of it and it happened again.’

It was enough to give Chelsea the foundation they needed. They started to attack with an intent and incisiveness which had been their strong point all seasn. And for those who enjoy the conspiracy theory, there was fuel to fire Mourinho’s talk of a campaign when Costa crossed the ball on 10 minutes only for Mangala’s out-stretched hand to prevent it reaching danger. It was a penalty and Costa and Cesc Fabregas protested furiously.

There was no lingering sense of injustice, however, as within four minutes Chelsea had extended their lead. Hazard had City mesmerised as he chipped a ball in for Oscar. The Brazilian executed an exquisite flick back to Costa, who cut inside to score his 17th goal of the season. ‘That was much more like the Chelsea the supporters would be used to,’ said Mourinho.

Costa might have made it 3-0 in the 79th minute, beating each member of City’s back four before allowing his wayward shot to be deflected wide by Nagamoto.

Chelsea may not invincible this season, as Reading proved but a month ago. But give them a break and you are unlikely to recover.

MJK46
7 years
Great job getting to the top but how do you draw Hull??
Login to Quote

The 34-year-old spent a season at Stamford Bridge under 'The Special One', picking up a Premier League winners' medal before leaving for Lyon in 2005. 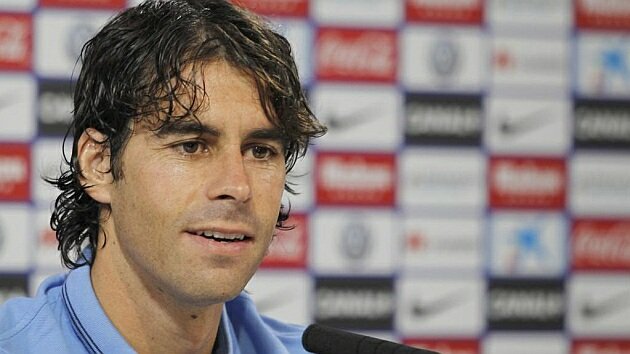 And Tiago says the whole Atletico squad are familiar with Mourinho's antics following his spell with city rivals Real Madrid and are ready to swat away his attempts to “crank up” the pressure.

"It's not just me: Jose was here for three years so we all know him," the Portuguese midfielder told The Guardian.

"Mourinho knows exactly what to say to his players in any given moment. He makes the decisions. He never consults the players and never tells the [media].

"He takes responsibility, he's the leader and it's a role he plays better than anyone. We all know that if he has to crank up the pressure to win he will do that."

Although Tiago was full of praise for his compatriot, he believes Atleti boss Diego Simeone is a match for Mourinho – even if there are subtle differences between their management styles.

"Of all the coaches I've worked with, they're at the same level: top coaches," he continued.

"Simeone's mere presence on the touchline motivates us. Seeing the way he lives every minute reaches you; what he transmits to us on the pitch is incredible.

"Mourinho does the same but in a different way - he motivates you through the week. It's perhaps more mental. With Simeone it is what he expresses, the energy, with Mourinho it's more the way he gets inside your head."