Jer
6 years
Some shrewd loan signings in dos Santos and Rose. A tough draw, but I am confident your wonder-tactic will see you through!
Login to Quote

He began the show in Europa League!

I had very good matches in the championship, where we have one defeat with 3-0 in front of the Man UTD, which I think have the best chance to win the trophy this season.
We had very good matches, I came back from 0-1 to Liverpool, and we beat 2-1, that was a fantastic match, very important victory after the Comunity Shield.
Another defeat hard to understand, is to Barnsley Cup match in which we lost 2-3 score here unfortunately fatigue was the first factor, and decisive.

It started in the Europa League curtain closed, and the first game we had in the company of Juventus, perhaps the main favorite to win the group.

A very difficult game on a difficult pitch in Italy, a long journey, from which frankly I had high expectations. The team started meciuil hard enough, and unfortunately the break the score was 1-4 in favor of Juventus. At the break I tried to tell them that they have nothing to lose guys, this is our debut, and deserve a very nice debut for very good last season.
It was a fantastic match then Maupay was sensational and managed to score twice, and so we managed another goal, who did explode gallery as making final match score shows 4-4.

The second stage was one as beautiful, and very nice goals scored. At half-time I had 2-0, and in a few minutes in the second half we were equally fast enough, but we managed to score a goal and the final score was 3-2, a very nice final match.

A third followed very interesting game, the match began with a red card after 13 minutes for my team, I had the strength to score the first goal in the 17th minute, but to break the score was 1-2 to BATE Borisov on break we decided that we can not defend, and I changed tactics on attack. The final score was a 5-2 surprise for my team.

I had pretty good games and I scored many goals. I hope the team to maintain its shape!

Jer
6 years
Fantastic comeback against Juventus and adding wins against the other teams in your group. You seem to handle well with the competitions (if you win your two other matches in PL you can go top)!
Login to Quote

A surprise for me!


I got a big surprise from the employer! I got a new budget for the period of winter is approaching, it was a big surprise when I saw how much money came into the club's finances!

Then came an unexpected offer from Spain, quite interesting, but I stayed to negotiate next year because I want to go out the season.
I want to help the team as much, and to go to a bigger level. A pretty good season so far, and I hope in the future to be as good season.
Unfortunately there are many injuries udneva lasting between 1-3 months, and this is a very important for the team.

There followed many offers from Spain, France. But for me the moment I will not think about a future in starting another league.


He followed next game with BATE Borisov, hoping for a big win new after that 5-2 home, but it was a very difficult match, unfortunately injuries were essential in this game, and so at the end of the match table showing 1 -2 for BATE Borisov.

The game against Juventus was again a very spectacular game, just fewer goals scored, a draw again, but a game with many opportunities! We were led 1-0, but then we equalized at 1-1, the final score find it.

The game against CSKA Moscow, would be decisive because we could lose if we fail minimum qualification a draw in this match. A major parties, and simultaneously very tense, many issues still lot, and I could not align a first 11 just as I would have liked!
It was a difficult match that very reason, the tension was very high, and as nerves. I was very close to leave the competition, but I was as close to make a very big surprise!I won the match thanks to a penalty scored by Sarcevic.

We are qualified! It is a great achievement for my team, for the first participation in a European competition.

I tried to invest money in staff, and the best coaches to bring something to the team.

Bringing the two cost 600k, they have attributes sensational in my opinion!

It cost 400k bringing to the team!

Income from Ajax in the Netherlands in the amount of 300k.

We invested 1.5M for staff as good, and in future I will pay more attention, there are people brought in staff will be present in the future! 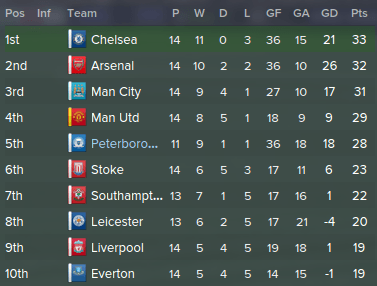 
The first took place after the qualification draw in the next act, I learned that the first opponent we will face in the next leg.
It will be a difficult match where we will meet TSG 1899 Hoffenheim, a strong team with many players interested.

It is in 2nd place in Germany at the moment, we have one month to prepare half game available plus this will be a very important period for transfers!
A team with many important players like Ezequiel Rescaldani, Niklas Sule, Vaclav Kadlec a young team eager to win trophies!

Year 2019 had concluded quite difficult, many very difficult matches, and many unavailability, unfortunately it was hard to keep pace in some pretty tough matches.
Many parties in the final because I had many matches rearranged and stayed to play them in the final year.
Three tough matches in one week, I wish that in the coming years, to manage to bring a few players in the team who can make the difference when entering the field.
We did a fantastic match in front of Chelsea, but unfortunately we lost a very important match with Man City, I hope that in the coming years, you can buy some young players and the future.

Jer
6 years
It'll be tough to beat Hoffenheim but I am sure you are able to do it. Best of luck in future matches
Login to Quote


I decided to strengthen the team as they follow many matches, and we needed players who make the difference when they enter the field!
So I decided to invest all money transfers, and bring the right player.

A quite talented player, brought more stations in the middle of acuperi more can and will be an important player because it definitely will help me transfer the cost of 2.3M

An interesting player, who came from OM, which has not played much, but has very good qualities, cost transfer of 1.6M.

Fabio Castellano, a very talented player who unfortunately suffered an injury after a sensational debut scored 2 goals that Liverpool had only played 4 games and scored 3 goals, and one decisive pass. His transfer cost 12.25M.

An experienced quarterback, I needed a strong player who can cope well in defense and in attack.

It was a full moon football, with good results, and unexpected defeat in front of Sheff Wed, match in which we lost a very important player Fabio Castellano.

I made a surprise first!


We managed to eliminate a very strong team like Hoffenheim, we managed to make two very good matches. Even though we lost 1-2 in the first, it was a game away and it was enough that I managed to score a very important goal, which gave us hope that we can return more, and that we can force a qualification.
Thus followed the game from home, and I managed to make a game better, so at one point we turned in our favor qualification, and Table 2-0 shows for us, unfortunately we got the first goal on the space gates percent those from Hoffenheim, in just 88 minutes.

I went out on penalties, where Leon rocked, and managed to pull out of the first 2 shots from Hoffenheim, and my players have managed to score all the shots battered.

A new appearance to the team!


The team has appeared a new very good player, very experienced, and that certainly with leadership qualities.

The new adversary in Europe, is a recent acquaintance, with whom I had very good matches in the group!

blitzkriegblue
6 years
Mate, this formation you are using, the one from the Community Shield, is 2 wing backs, 2 CB, Ball Winning Mid, some DLP maybe, two wingers and DLF and AF? What about the team instruction?
Login to Quote

Jer
6 years
Nice signing in Moutinho and best of luck against Juve!
Login to Quote

A suspension quite hard!


We were eliminated from the Europa League after a double leg quite difficult with Juventus in the home match we played very badly, because I could not concentrate very well and we did not do very much good, so the final scoreIt was 1-3 unfortunately it was a decisive match, since we in return, the score was 0-0, because we did more. I could repeat the good of the group matches.

It is good because we managed to fulfill our objective, that being to make a good figure in the group, I managed to get out of the group, and was much more pleasant.
In the championship next most important step, and we need points to stay up in the rankings.

There will be three tough matches, which will depend on the final standings.